The first thing on my agenda for mid April, was the annual Brockville Ontario Speedway  Fan Fest and  fundraiser for the Childrens Hospital of Eastern Ontario. (21st April)

As usual it was being held outside the large Walmart store beside Highway 401 at Brockville.

I left home in Cornwall about 9-00 am and after a stop for coffee , was pulling up out side Walmart just after 10-00 am. 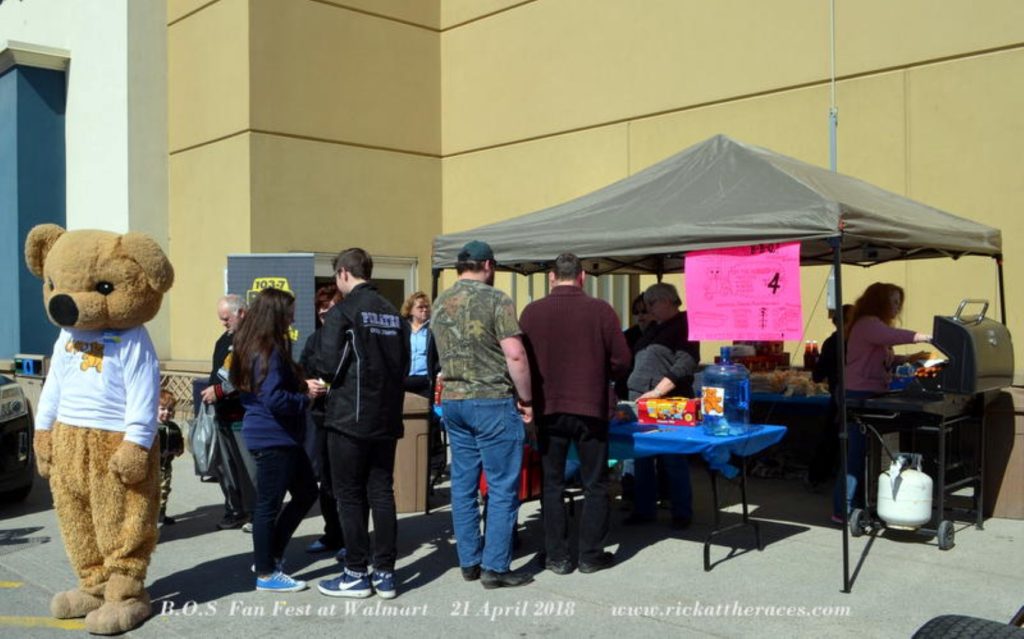 There were about a dozen race cars on show, along with live music and a refreshment stand.  The local radio station were there too. 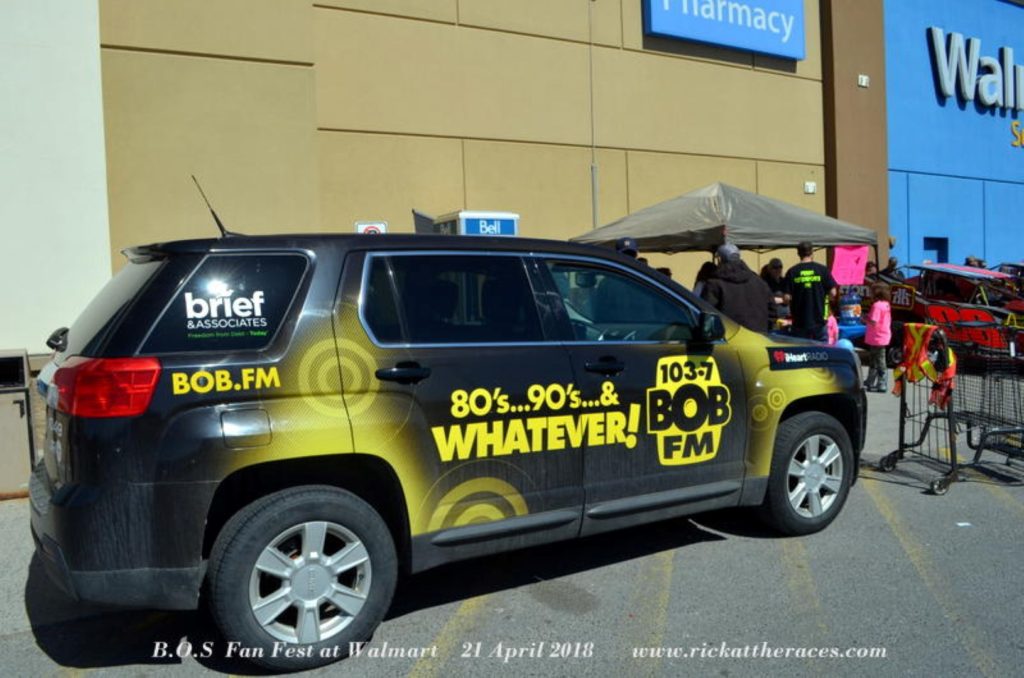 Brockville promoter Paul Kirkland was there making sure things went along smoothly. 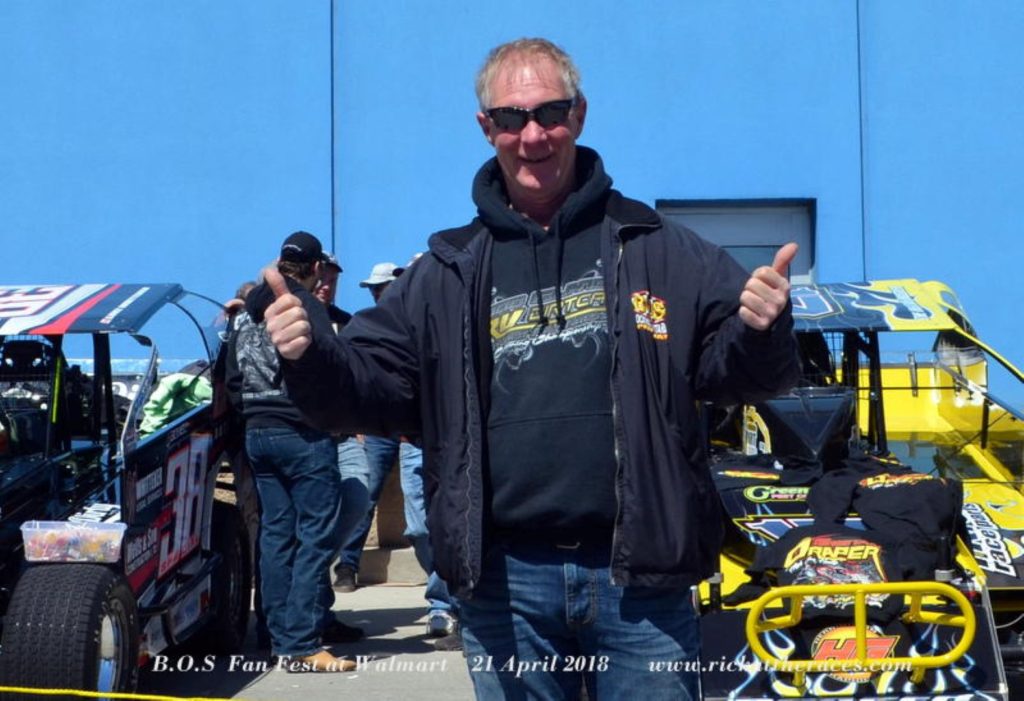 This year the music was provided by the Will Scott duo. 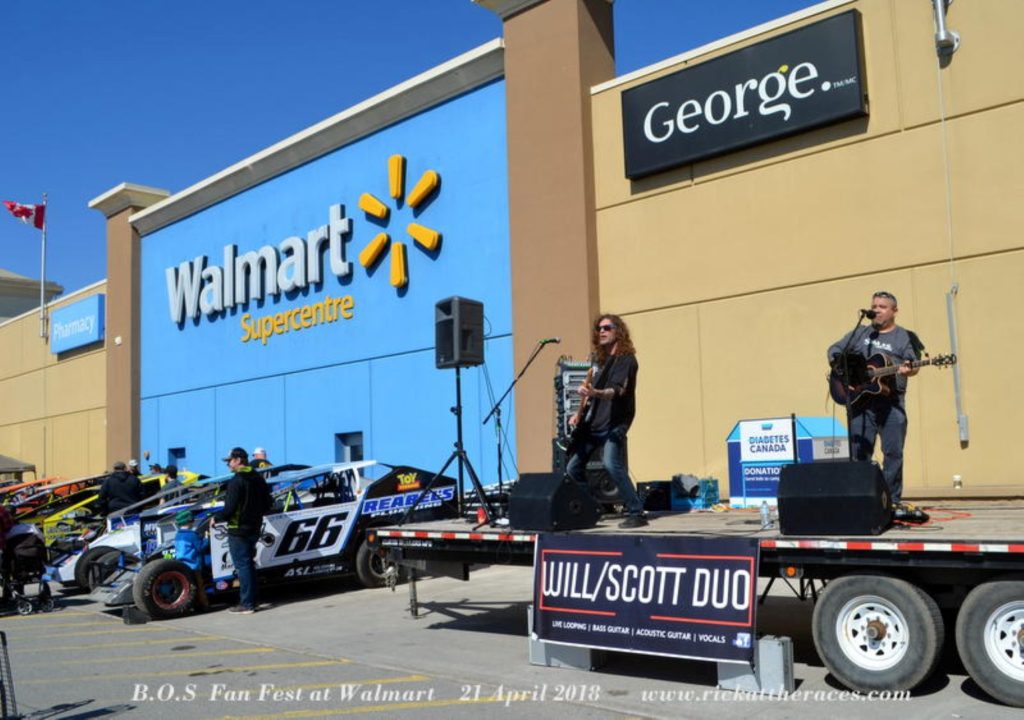 It wasn’t long before I was chatting among friends and getting some Rick at the Races stickers added to a few of the cars. 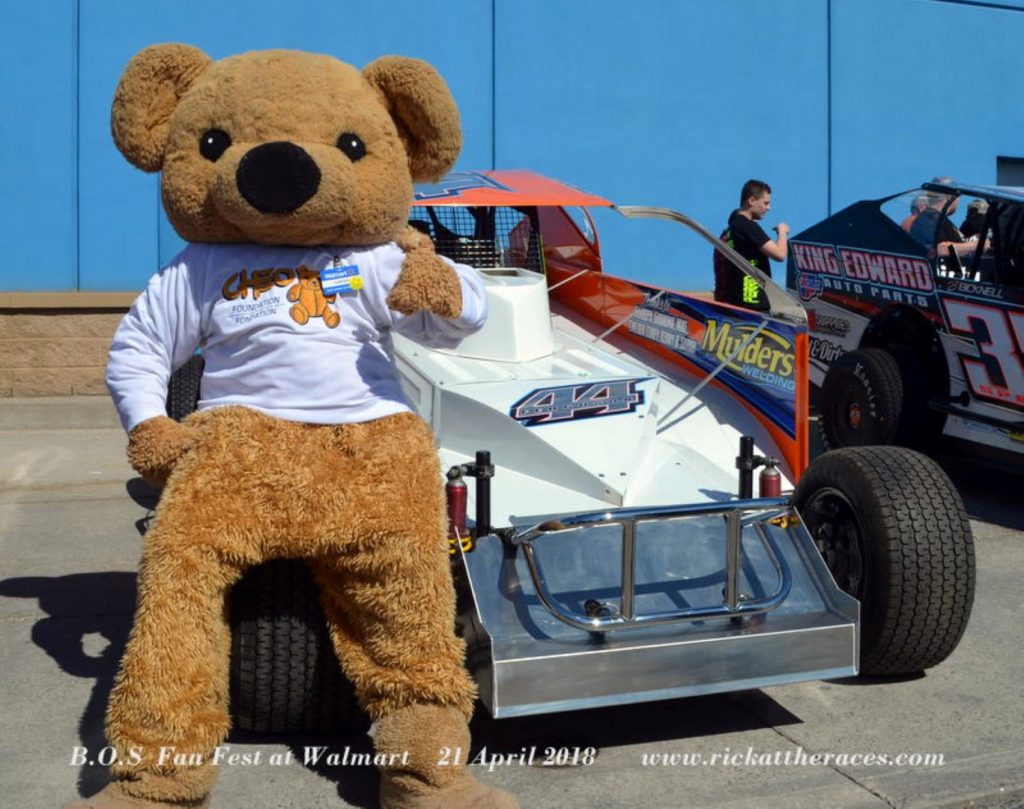 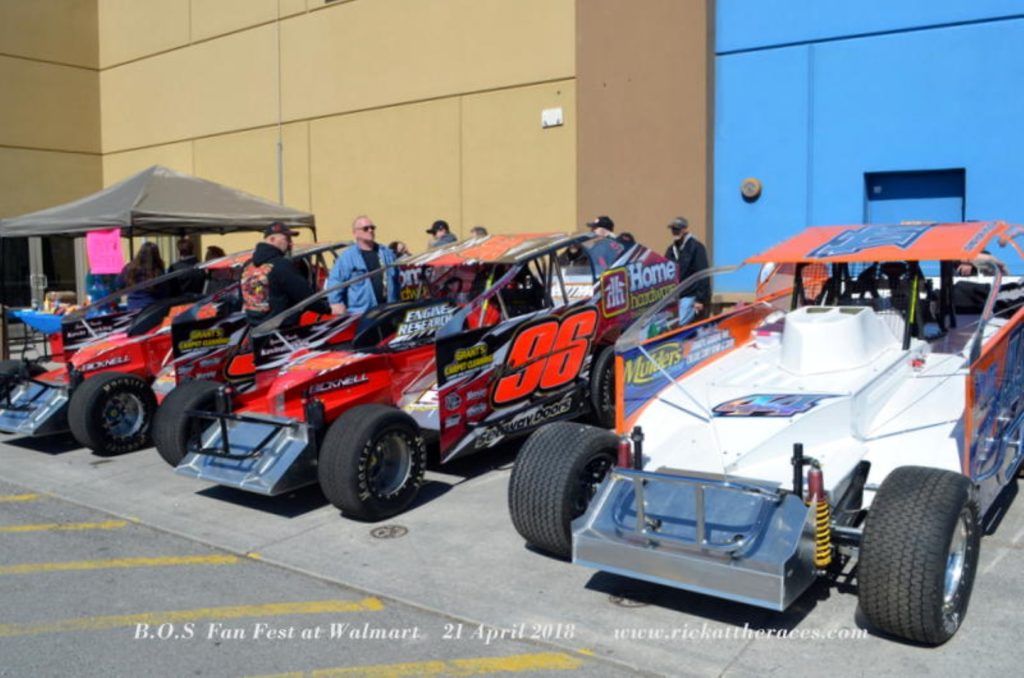 Once again it was a great effort by all concerned  raising money for a great cause. I stayed around socializing until about 2-00 pm before heading back home. 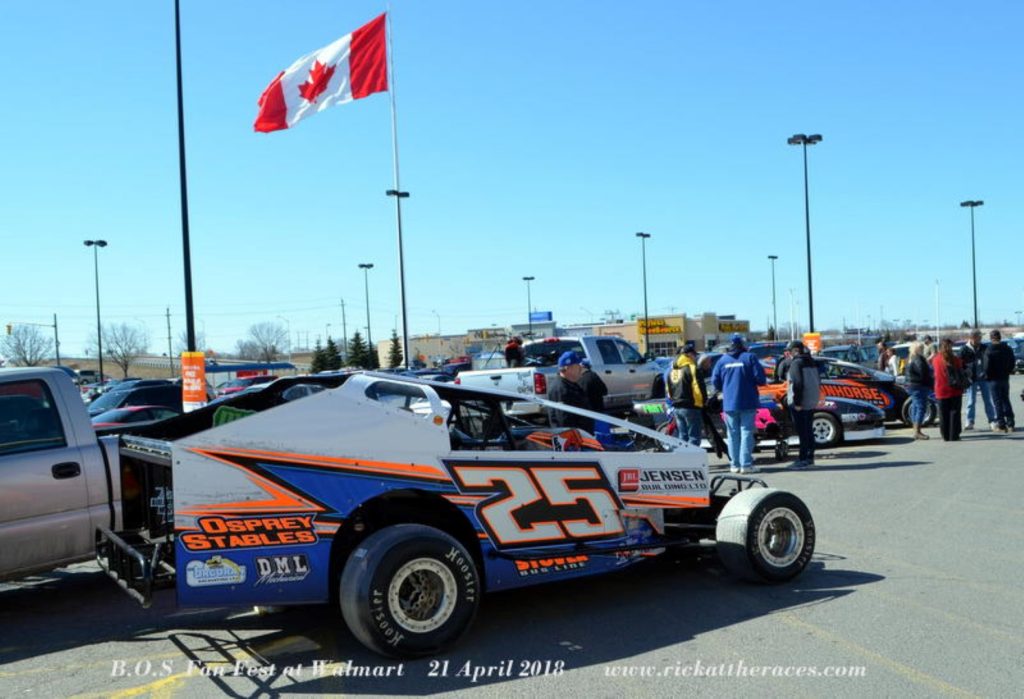 Although some racing has began , south of the border, I chose to give it a miss.

The annual Ice Jam was taking place at the Fonda Speedway NY, that night, but , a chilly damp night for someone like me, recovering from pneumonia would not of been wise.

Instead I was still taking it easy, and looking forward to the following weekend (28/29 April) , when I hoped to be back in action for the start of my race season.

R.I.P Junior David,    On Friday 27 April,  I learned the sad news that we had lost one of the most loved and key figures in my local racing fraternity.

Junior David ,  his family and race team have been major contributors, and part of the scenery at the Cornwall Motor Speedway, Mohawk International Raceway and a lot of other tracks for many years.

Two years ago , I was lucky enough to receive the Mitch Jock Trophy that his family annually present at the Cornwall Motor Speedway Banquet.

I would like to offer my sincere condolences to all his family at this very sad time. 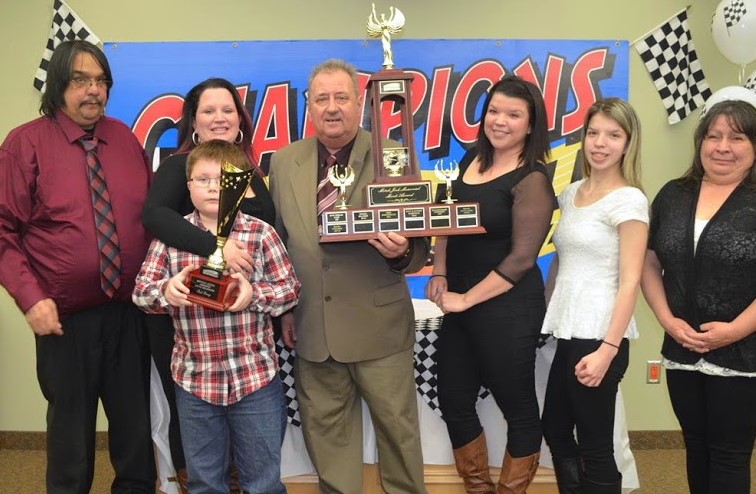 With overnight accommodation booked, I set off  on Saturday 28 April for a weekend road trip,  to the Fulton Speedway NY Super Dirt Race and the Utica-Rome Speedway NY on Sunday.

The weather wasn’t looking good, but I was optimistic. I left Cornwall, Ontario at 8-45 am .

On route I heard via my NY photographer buddy, John Meloling, that Fulton had been canceled due to the rain . I carried on regardless, to the Watertown area of NY, where I stopped for lunch  with my good friend Dawn Kampff.  We  went on line, and looked for my other options.

My Plan B had been the Thunder Mountain Speedway, at Lisle NY, a track I’ve never been to before, but alas, this had been canceled too. We also learned that the Utica-Rome race I planned for Sunday had also been called off.  Not good !

My first job was to call my motel at Fulton and cancel my reservation. Once that was done, We looked at my other racing options,

Fonda and Canandaigua Speedways both had high hopes of getting their shows in, but the radar forecasts didn’t look good.

What shall I do ?   risk driving the 4 hour round trip to one of them or heading back home. I decided that returning home was probably my best choice, and glad to say it was the right one.

By the time I got home, I found out both Fonda and Canandaigua  had joined the cancellation list.

Oh well these things happen when your a race fan, there’s nothing you can do when Mother Nature pokes her nose in.  So it turned out to be another weekend at home.

Sunday morning was spent watching the live TV coverage of the F1 Grand Prix from Azabaijan.

There was plenty of drama in this one and an unexpected result.

The two Red Bull cars of Daniel Ricardo and Max Verstappen put each other out during some intense close racing.

Sebastian Vettel ruined his chances in the Ferrari after scrubbing his tires during a risky passing maneuver.

Romain Grosjean in the Haas, put his car in the wall while warming his tires during a safety car caution.

As the race came towards the end Valtteri Bottas in his Mercedes looked all set for a faultless drive to the checkers, until disaster struck. A piece of debris on the track from one of the previous wrecks caused his tire to puncture, which handed the race to his team mate Lewis Hamilton.

That’s it, for April, lets hope May brings some warmer and dryer weather.