This past weekend was one I’d been looking forward to, for a long time , and it couldn’t come sooner. After one of the longest and snowiest winters for many years, I was ready for some racing action.

I had no medical appointments during the week, and by the time Friday came around, I was packing my car, ready for an early start on Saturday morning.

My plans were to attend the Super DirtCar Series for Big Block Modifieds at the Can Am Speedway , Lafargeville NY and then go on to the  Utica-Rome Speedway on Sunday.

It’s been ten years since the series last paid a visit to Can Am, and track promoters, the Bartlett family,  were making a bold move by staging this prestigious event as their season opener. I can’t remember a Super DirtCar Series race taking place, as far north as this, so early in the year.

The Sportsman division and 4 cylinder cars were also on the program.

The weather forecast looked good, and was saying that it’d be a  dry and sunny day.

I left my place in Cornwall, Ontario about 9-00 am for the two hour drive to the nearby Watertown Ramada Inn, where I planned to stay the night. Normally I wouldn’t stay overnight for a Can Am race, but with the Utica- Rome Speedway on my agenda for Sunday, it didn’t make sense to drive home.

Once booked in and had lunch, I headed for the track.

Although I don’t get to Can Am too often these days, it has a soft spot in my heart. In 1995, it was the first place I witnessed Dirt Modified racing, after moving from the UK to Canada in the fall of 1994. 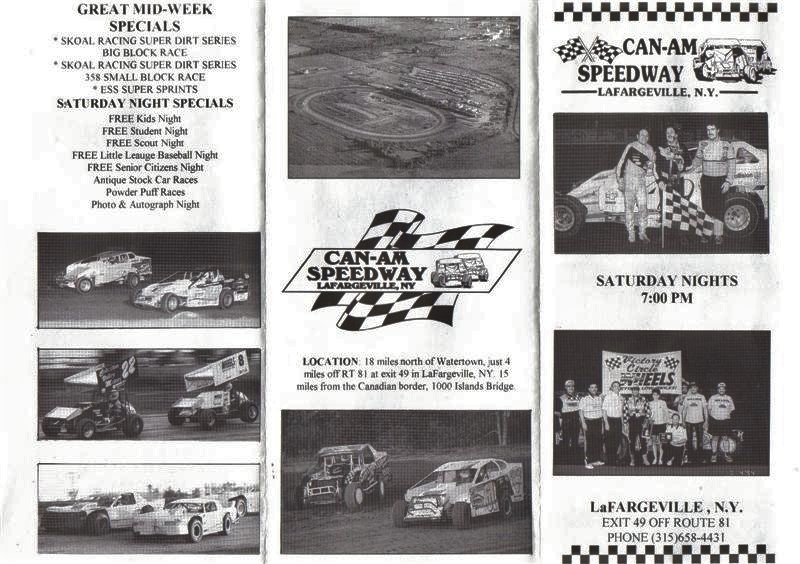 It was a family outing  that day , and my ‘Fathers Day’ treat.

I was really hoping that this years early season SDS event was going to be a success.

Pit gates opened at 12-00, so when I arrived about 1-30 pm they were already starting to fill up.  My first priority was to check out the new cars in the pits and catch up with friends. 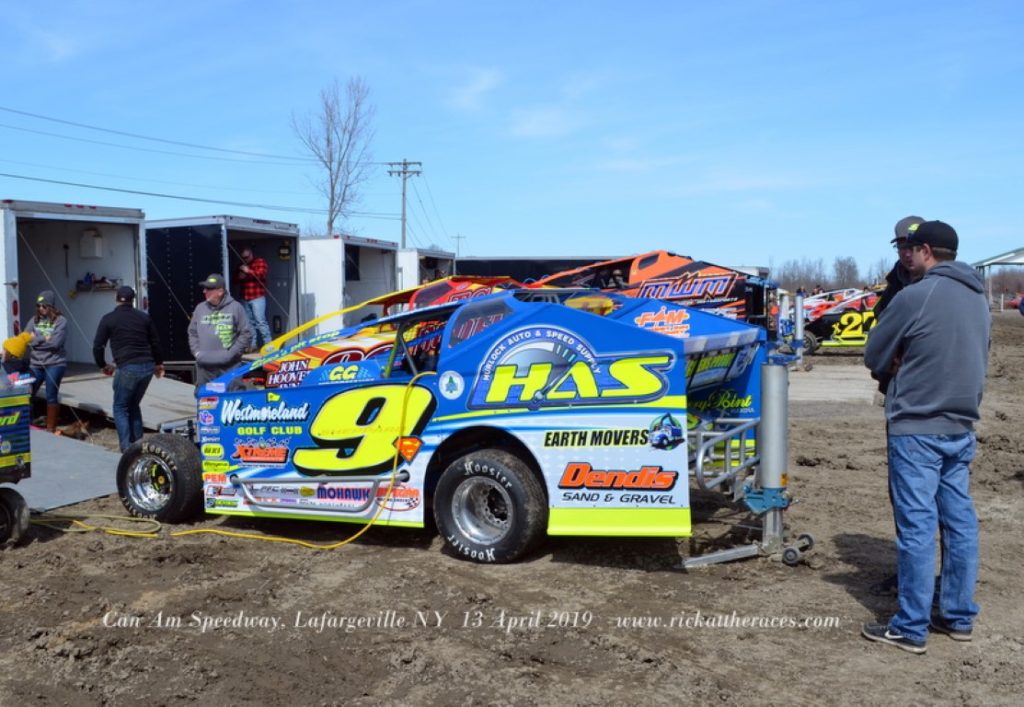 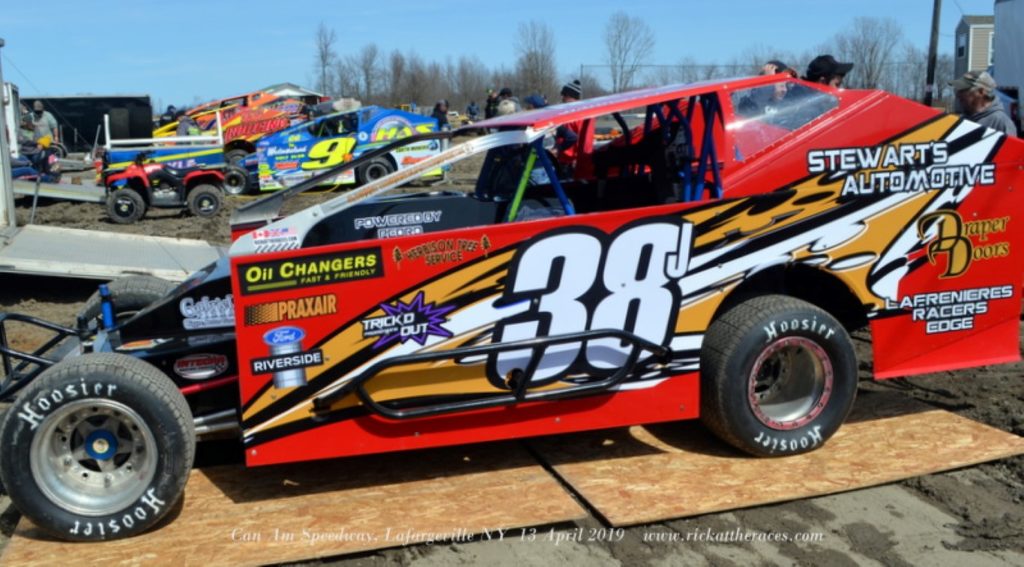 It was nice to see the new Sportsman car of Jarrett Herbison , with a Rick at the Races sticker on the side. 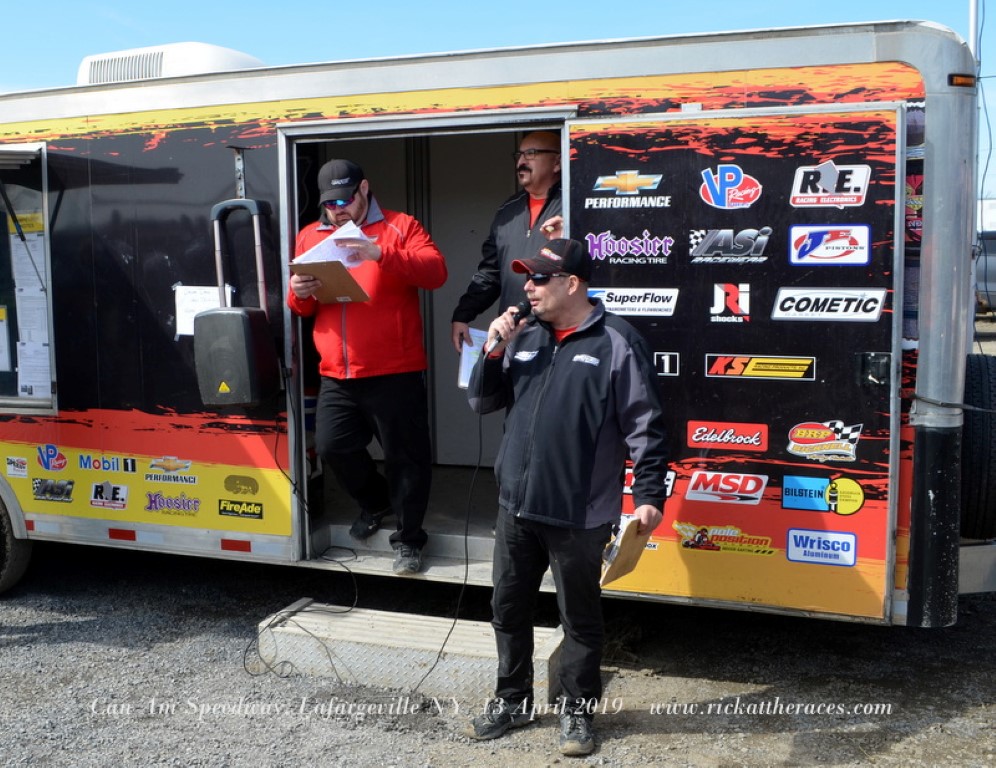 After listening to the drivers meeting I headed out to the middle.

With it being such a high profile event, there was a large number of ‘Togs’  in attendance, too many buddies , to mention them all by name.

I placed  my lawn chair on the inside of turn three and four and spent most of my time taking pics alongside Peter and John Ling and A J  Yarbroady. 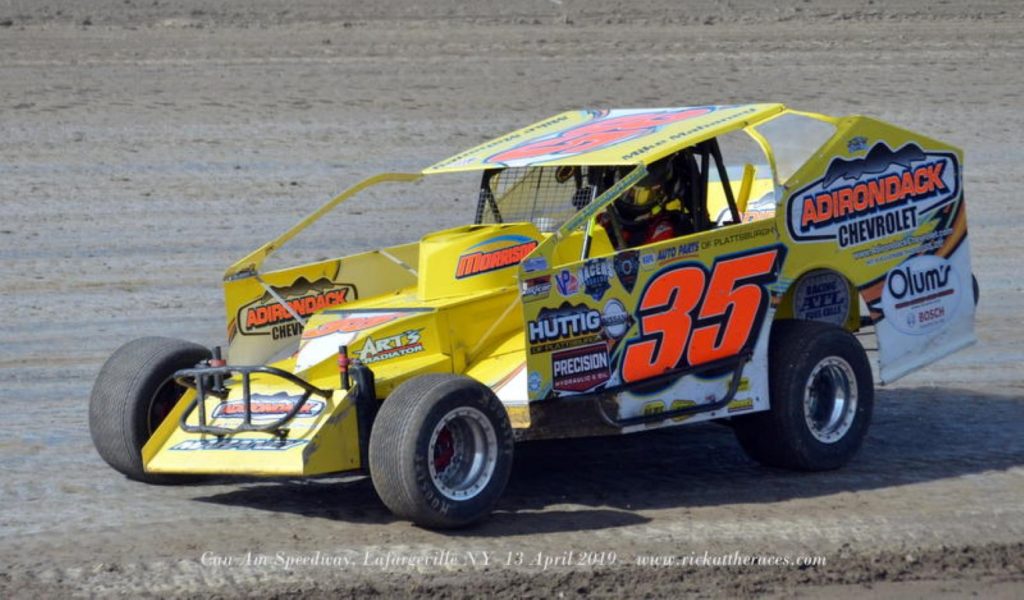 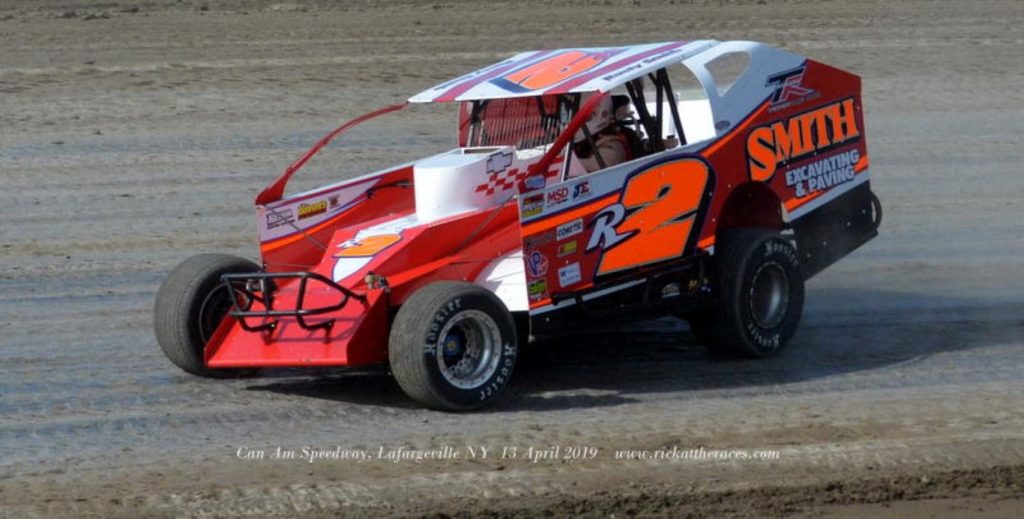 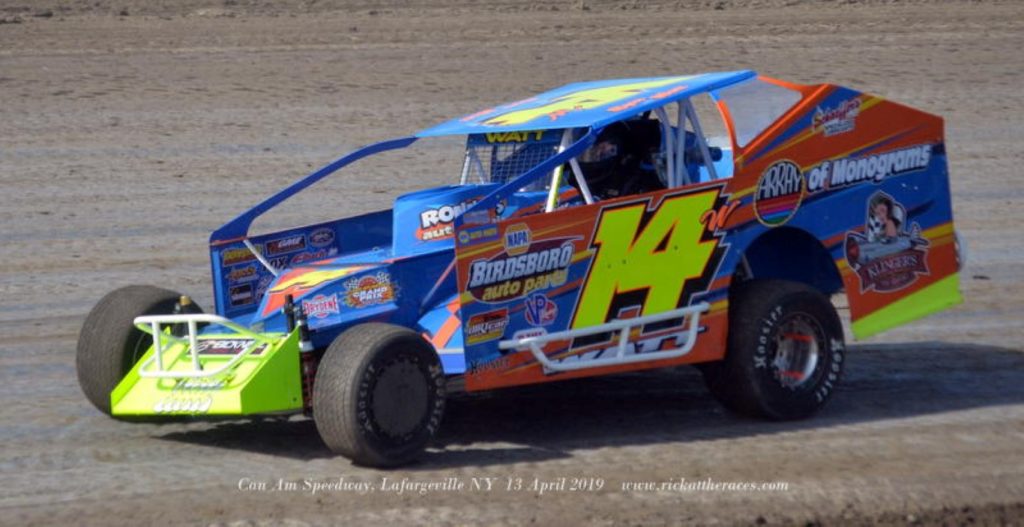 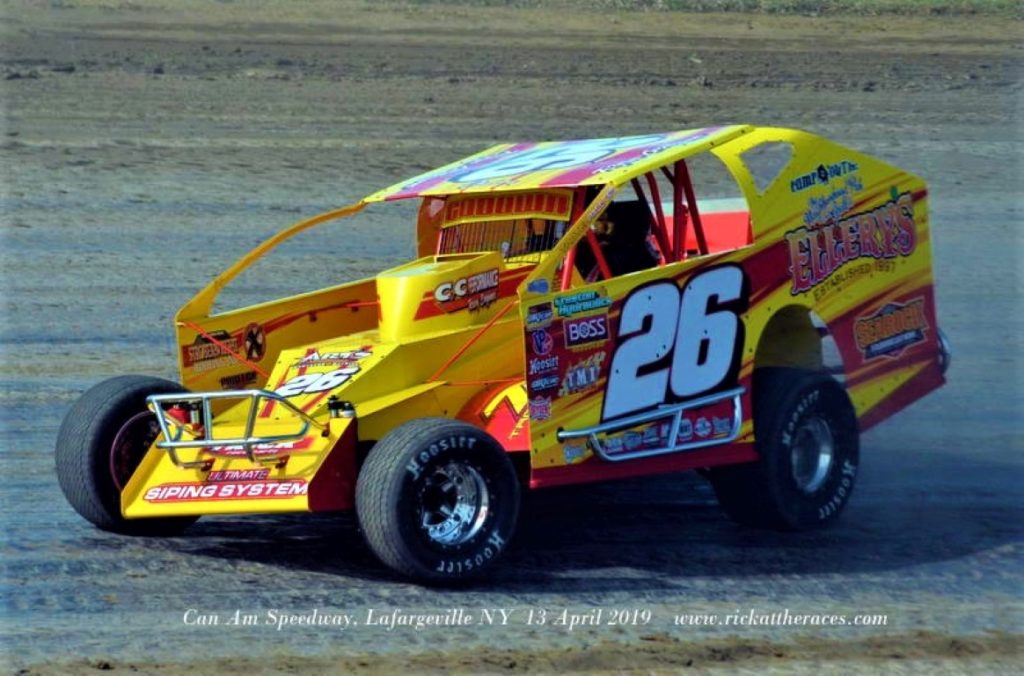 It’s nice to have some new faces on the SDS tour this year, especially Ryan Godown #26 and Ryan Watt #14 . They are both top runners from the New Jersey area. Godown always went well when I saw him on the Syracuse Mile, and Watt was the winner,  last time I visited the Bridgeport Speedway NJ.

Although it was a dry and sunny afternoon, there was a very cold breeze, but thankfully the show moved along swiftly as the sun began to set.. 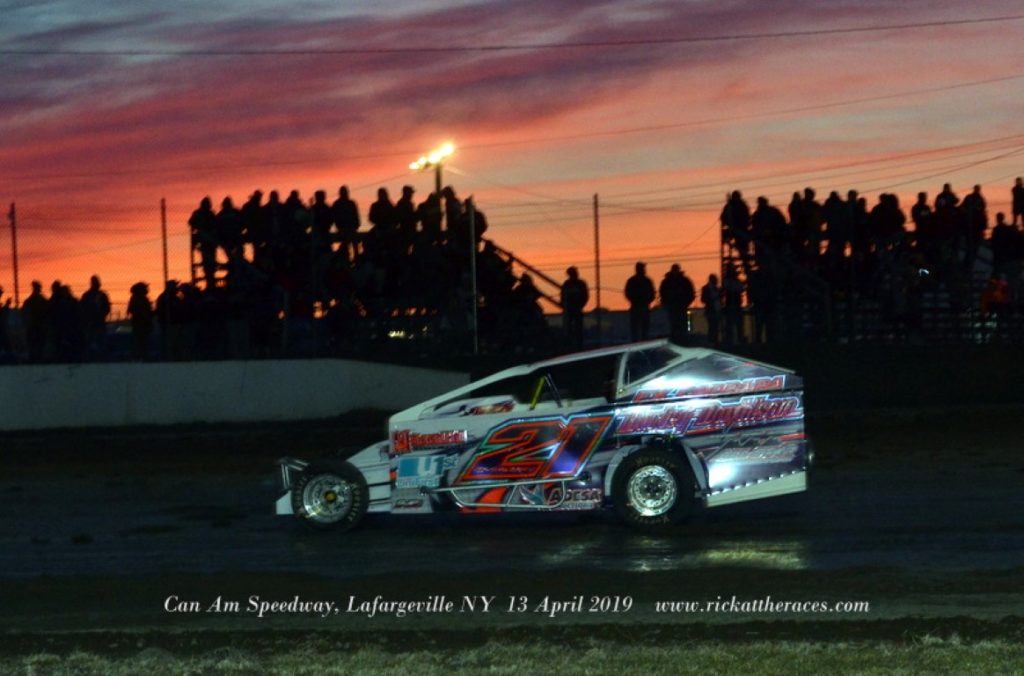 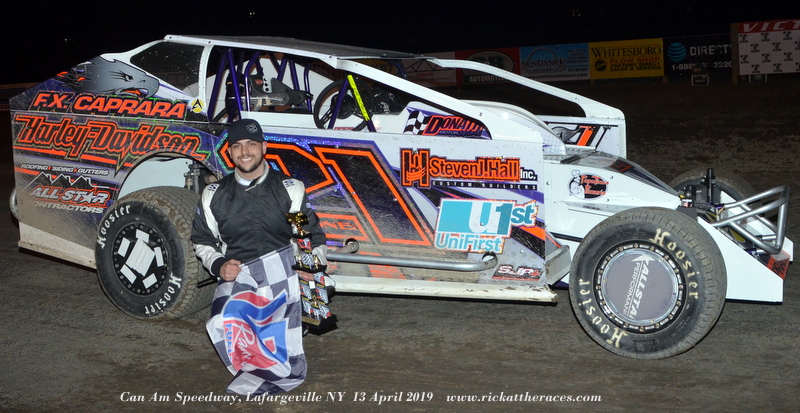 The 25 lap Sportsman feature was up first and was completed without too many stoppages. It was Taylor Caprara that took the checkers.

The 100 lap SDS race followed this and after the driver introductions, the parade lap began began. 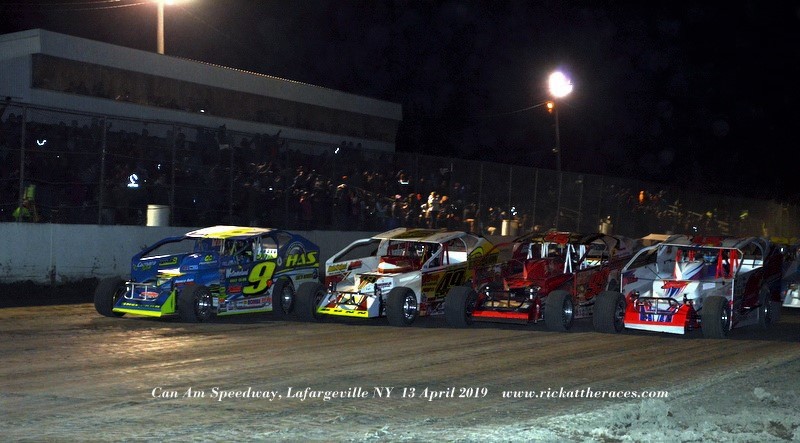 Matt Sheppard who started at the front dominated the race, but had various challengers throughout . 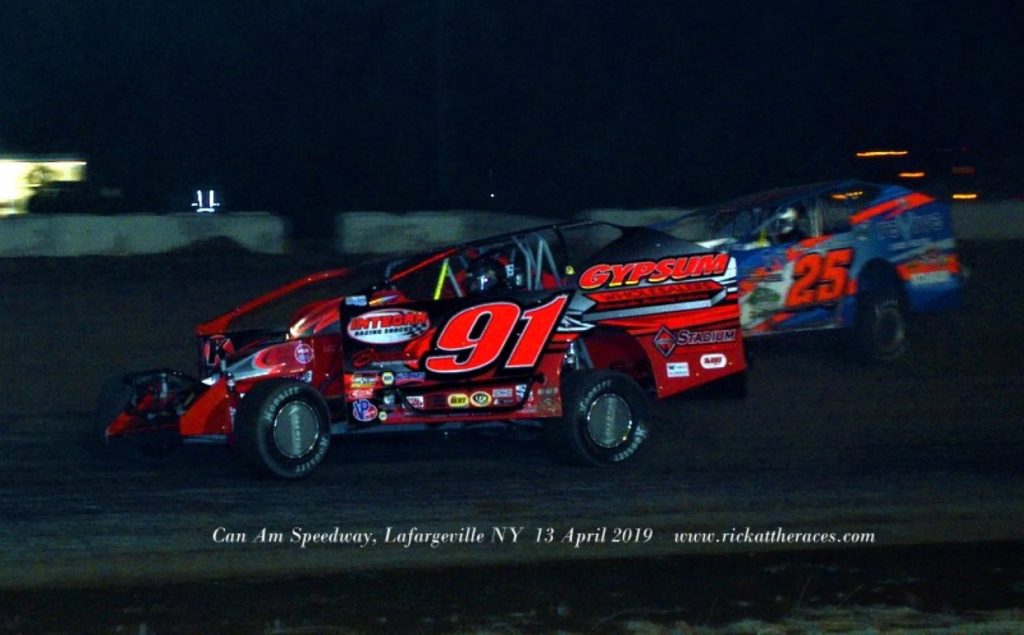 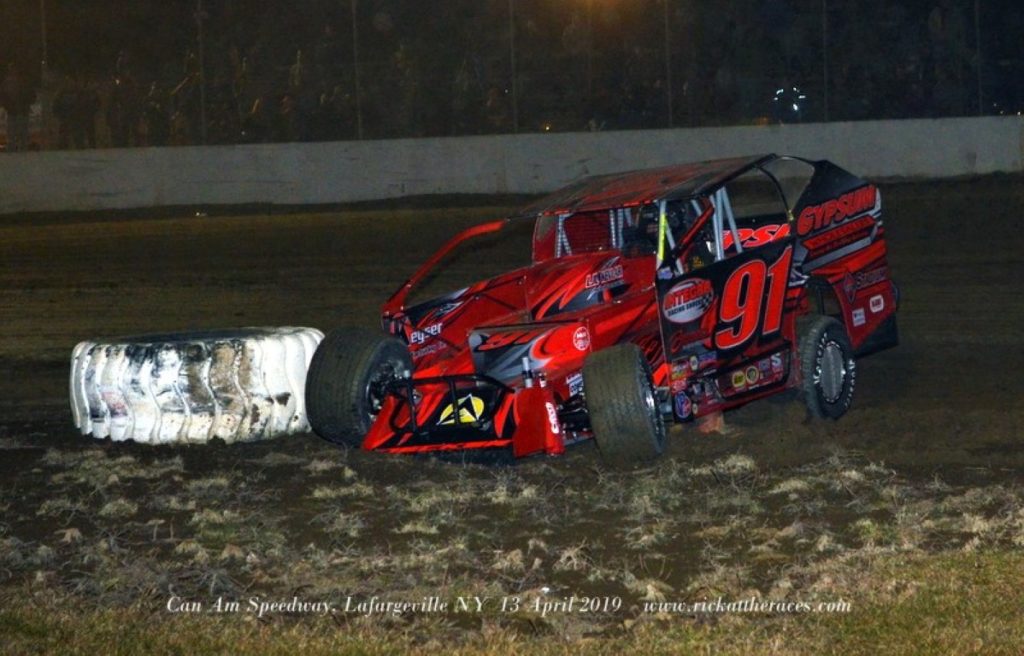 Early challenger was Billy Decker, until he crashed out. 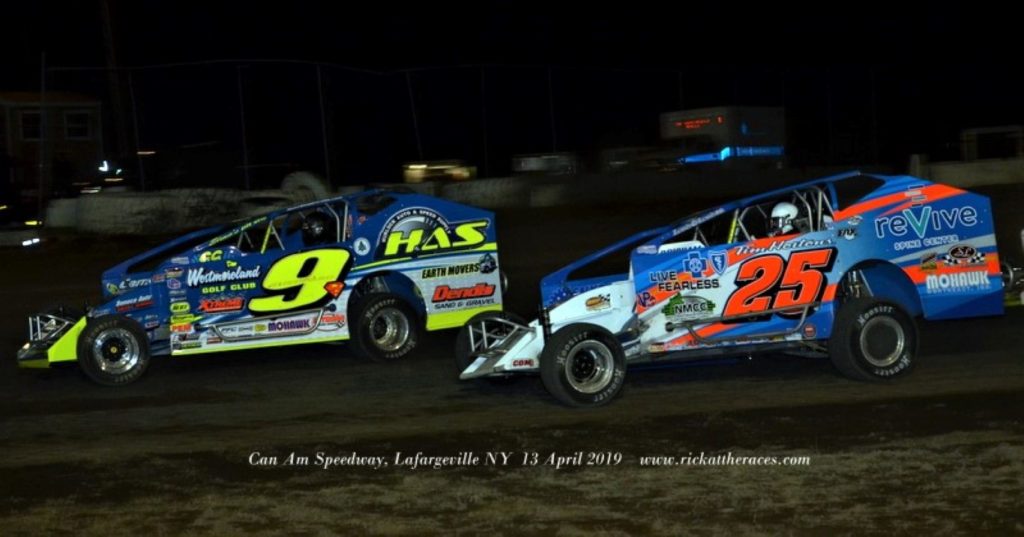 Also,  Erick Rudolphe looked capable of passing Sheppard but he then  slipped back. 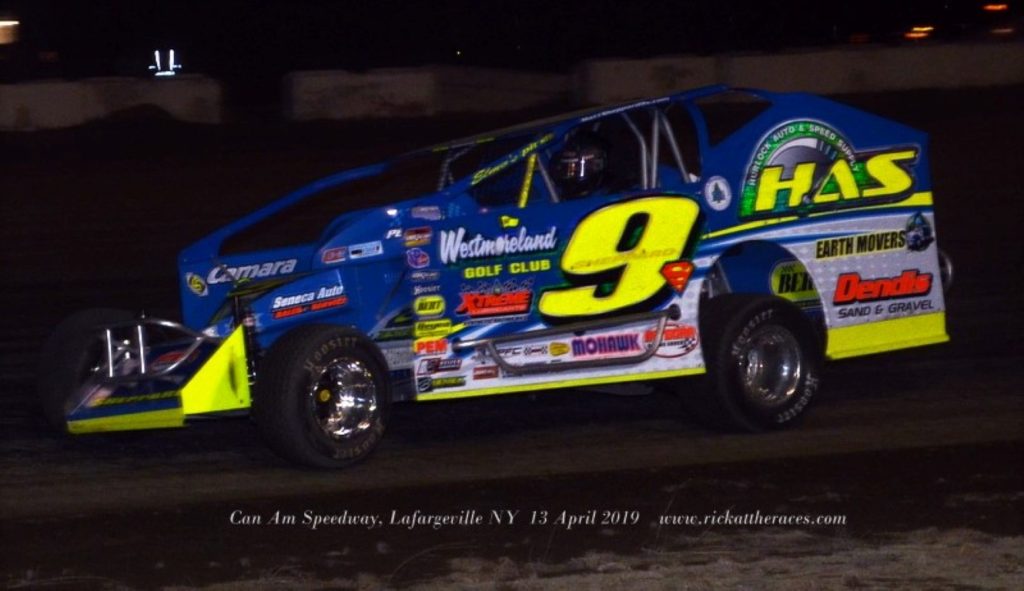 As the race got nearer to the checkers,  it was Matt Williamson and Billy Dunn came into contention  to pass Sheppard, but Super Matt was having nothing of it, and just brushed them both  aside for the win. 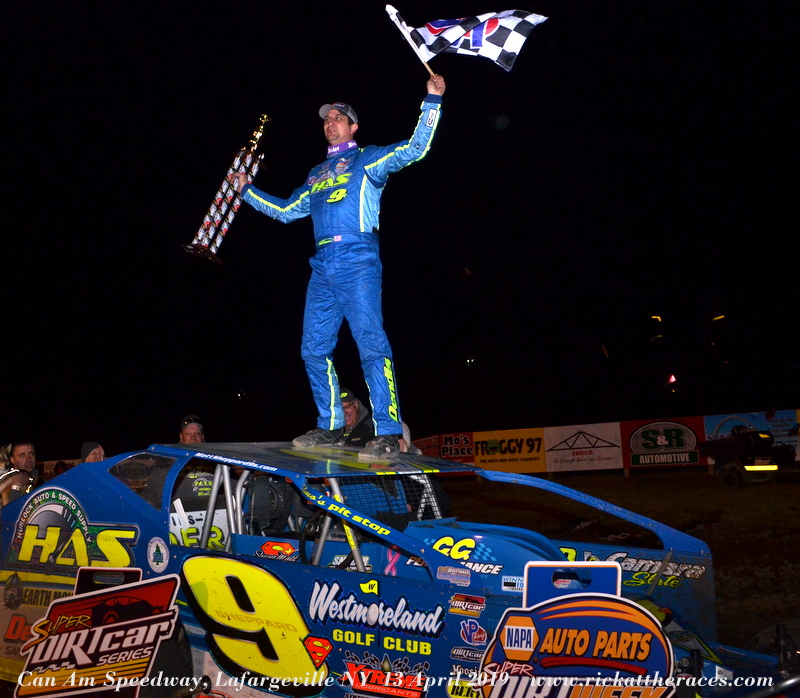 It turned out to be a great night for Can Am and the Bartlett family, There was a large crowd and plenty of race cars.

After chatting with my fellow ‘togs’, it became clear that the Utica-Rome races for Sunday were in doubt , with a 90 per cent chance of rain. I’d already booked in to my Hotel, so headed back there anyway, and figured, I’d find out the status in the morning. After such a cold night of taking pictures, it was nice to be in a warm room soon after the race.

By 9-15 am on Sunday, I found out via social media, that the Utica-Rome races were off. I must admit, I expected it , so after a bit of shopping in Watertown, I took a slow drive home.

While I was at the Hotel, during the early hours of the morning, the F1 Grand Prix was taking place in China. I couldn’t find any live coverage from the TV set in my room so had to be content on  finding  out the result in the morning.

It was another first and second for Mercedes, with  Valtteri Bottas following  Lewis Hamilton over the line. Sebastian Vettel was third in a Ferrari.