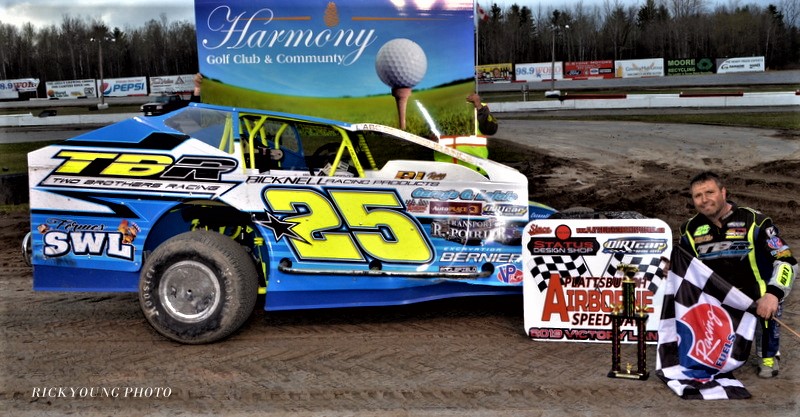 I had big plans for this past week, but like it often happens at this time of year, Mother Nature forced me to change my agenda.

I hadn’t got much going on early in the week with the action beginning on Thursday .

Things  went smoothly that day, with no problems.

The Airborne Speedway ,  Plattsburgh NY, were holding their pre season practice day, and I made the short trip over there to take a look.

I saw my first races at the Airborne Speedway back in 2004 and I still try to get there as often as I can. 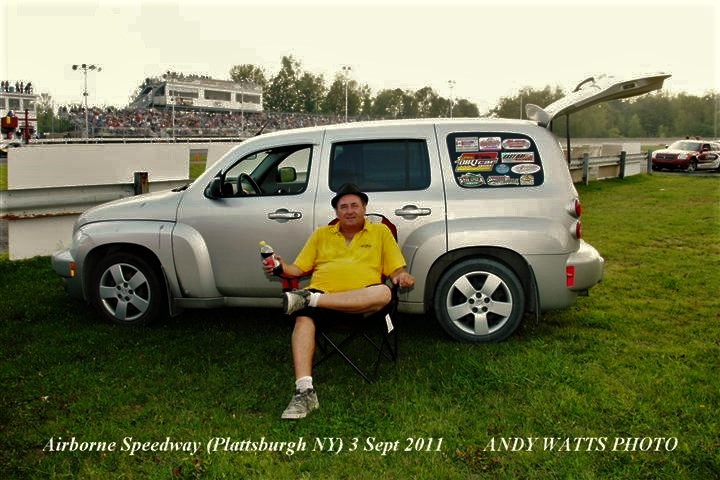 It’s one of my favorite tracks in the North East , and I have some fond memories from time spent there,  and the friends I’ve made over the years.

Back in 2005 I took part in the ‘media race’ in the loaned car of Perry Winch.

Back to the present ,  Thursday was a lovely sunny day as I took the drive over to Plattsburgh and I arrived there mid afternoon.

This year, former media man, Robby Knowles has taken on the position of Track Promoter, and he was the first person I bumped into on my arrival.

There was a great turnout of cars parked in the pits , ready for the practice to begin at 4-00 pm. The track was in excellent condition, and had been prepared by new  “track – prep’ man Josh Laware.

While wandering around the pits I got talking to Mike Palmer, the # 85P  Sportsman driver from Vermont. 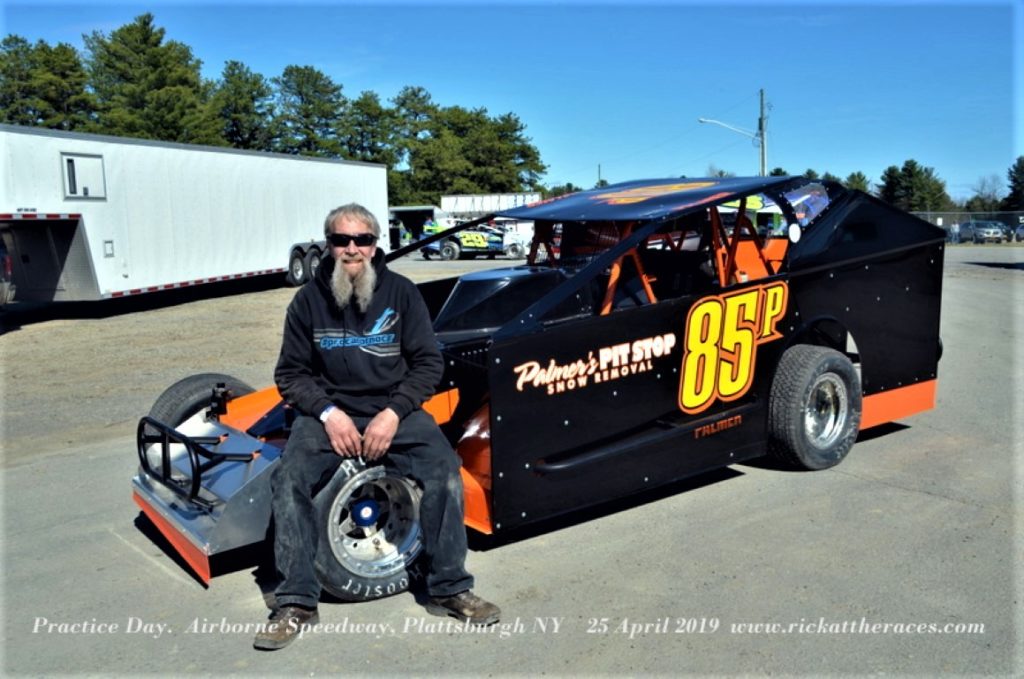 He told me that he’d recently come out of retirement after a 20 year lay off, and recalled some stories of the times he used to travel to my local Cornwall Motor Speedway with his travelling partner Mike Bruno. 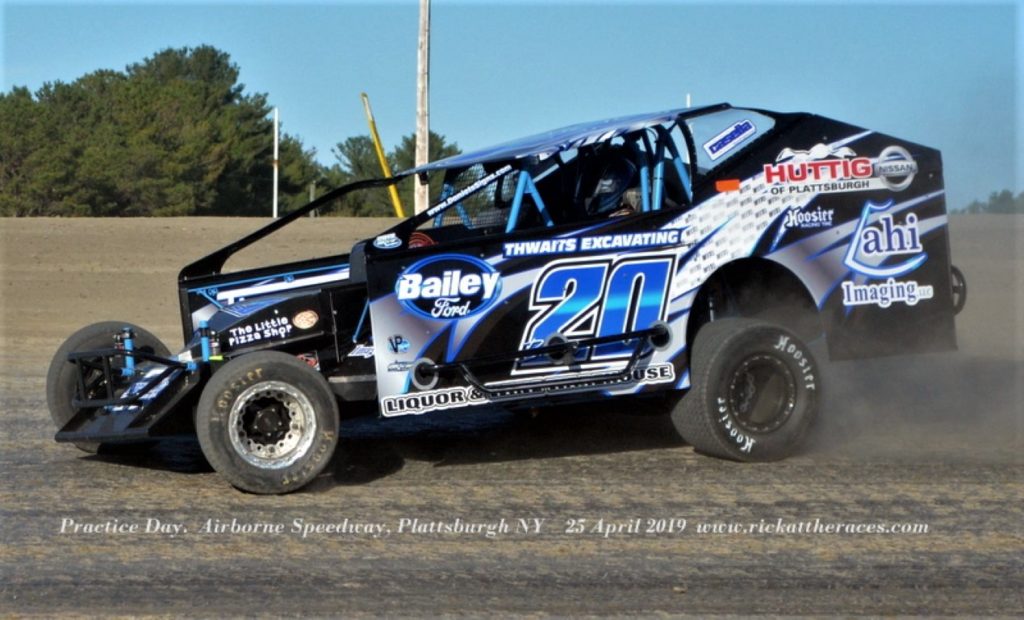 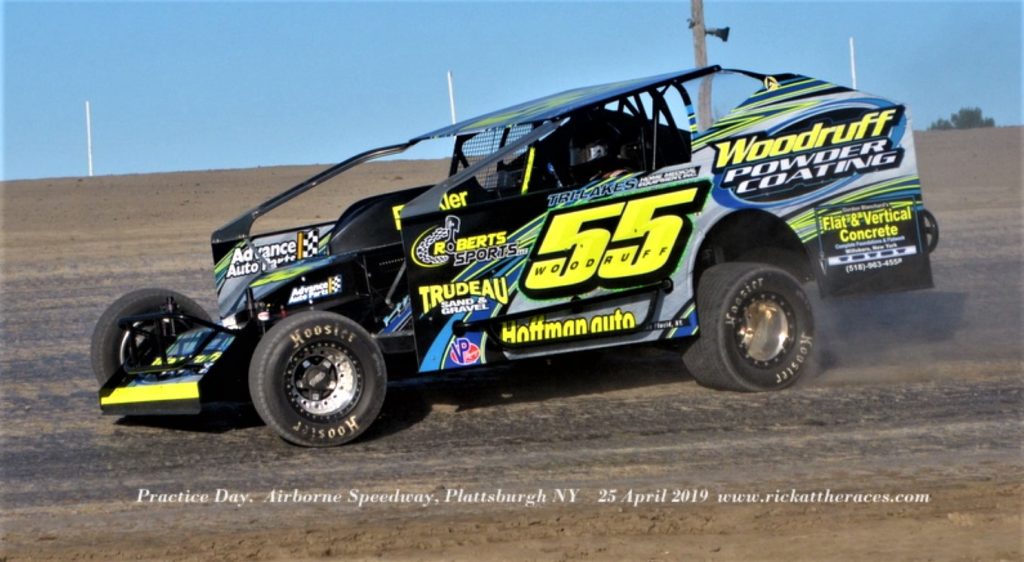 There were many divisions in attendance and I spent a couple of hours shooting the action, before heading for home.

Alas, this was when all the good weather ended. The rain started Thursday night and continued on an off until Saturday morning.

Plans to visit my local Can Am Speedway at Lafargeville NY on Friday were thwarted, when it became one of the early cancellations.

Along with many other tracks, the Fulton Speedway NY,  which had been my Saturday night plan for the Super DirtCar Series also succumbed to  wet weather.

I’d also planned to drop in on my way to Fulton, to the Saturday morning Fan Fest staged by the Brockville Ontario Speedway at Walmart , but this too was called off.

Good news ,  came my way, early Saturday morning from the Airborne Speedway  . The rain had ended there and after a track inspection, they were going ahead with their season opener that night.

I joined ‘tog’ buddy Don Simpson, for my second trip to Plattsburgh in two days. Even though the weather in our area was still looking miserable  we were willing to take the risk.

As we got closer to the track , the sky began to get brighter, and we actually caught a glimpse of the sun , trying to break through the clouds. When we arrived at 2-00 pm our prospects looked even better and saw the pits were almost full of cars . Although it was dry, it was still quite chilly.

I had the chance for a quick look around the pits before the action began. 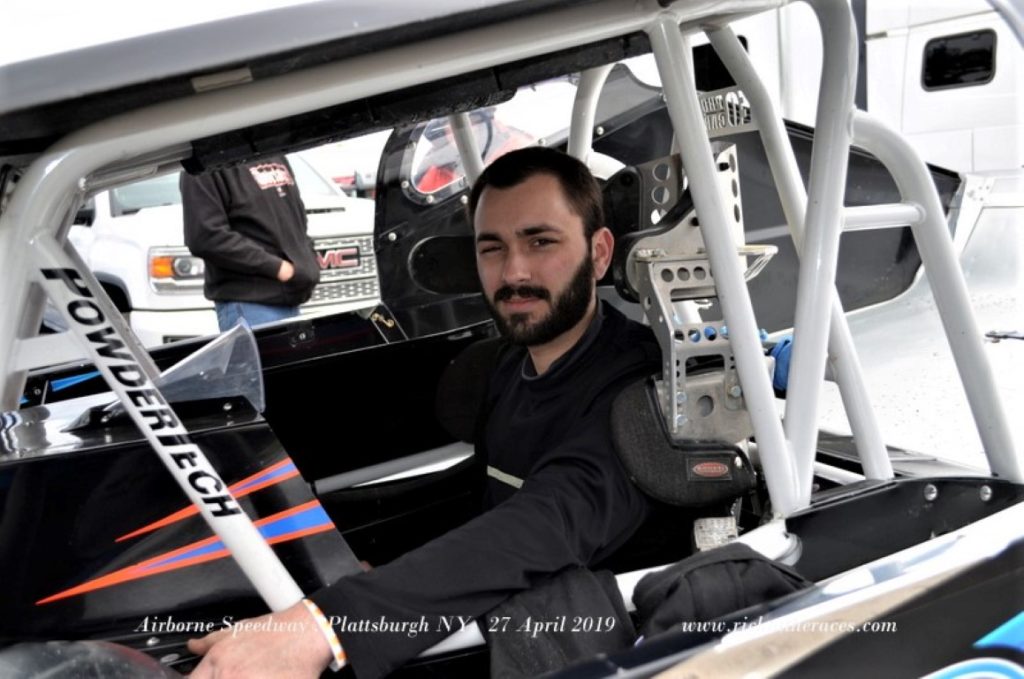 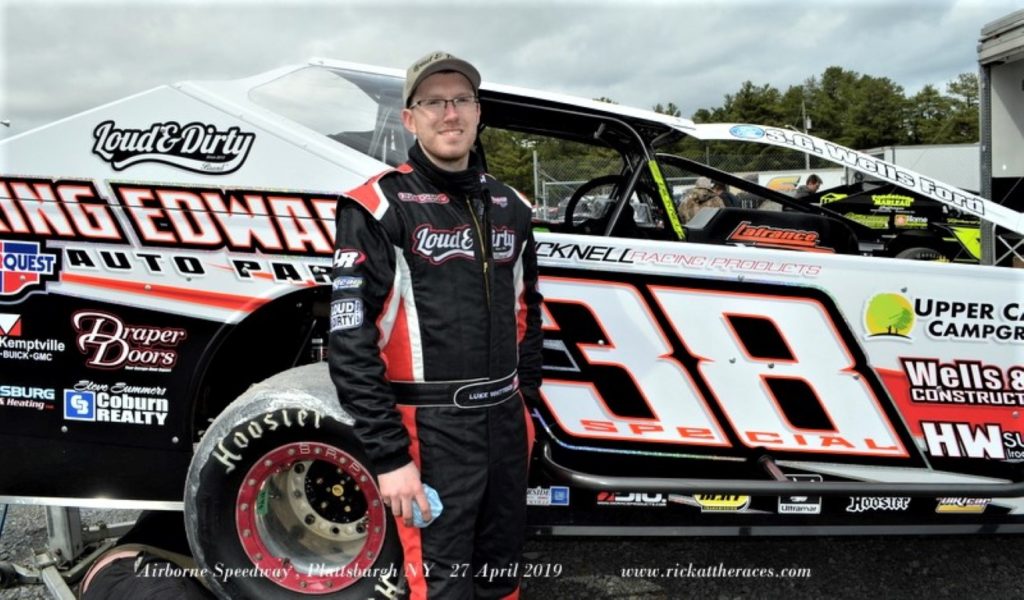 Once again the track looked in great shape and just after 3-00 pm the scheduled hot laps began. 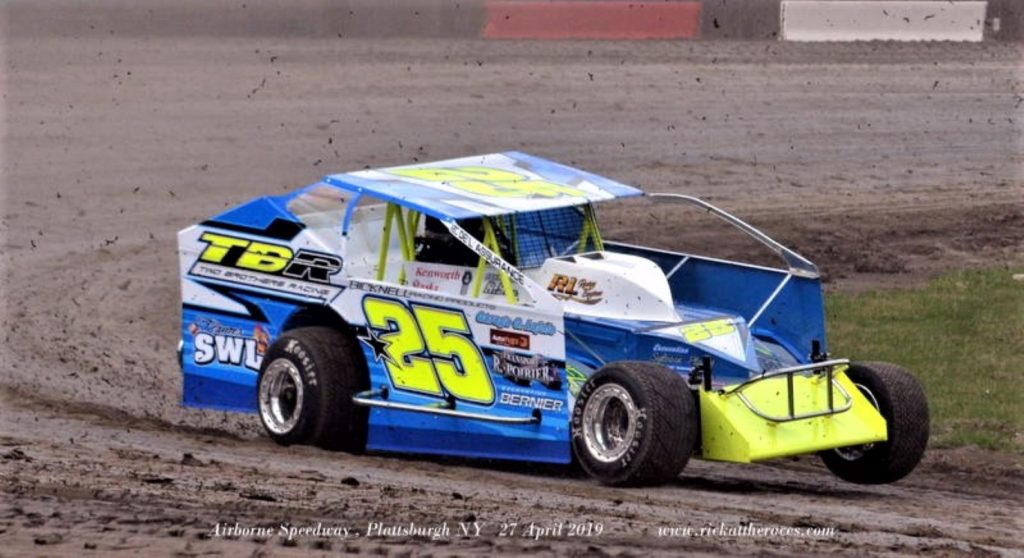 I decided to shoot from the outside of turn four for these , before crossing to the middle for the heats. 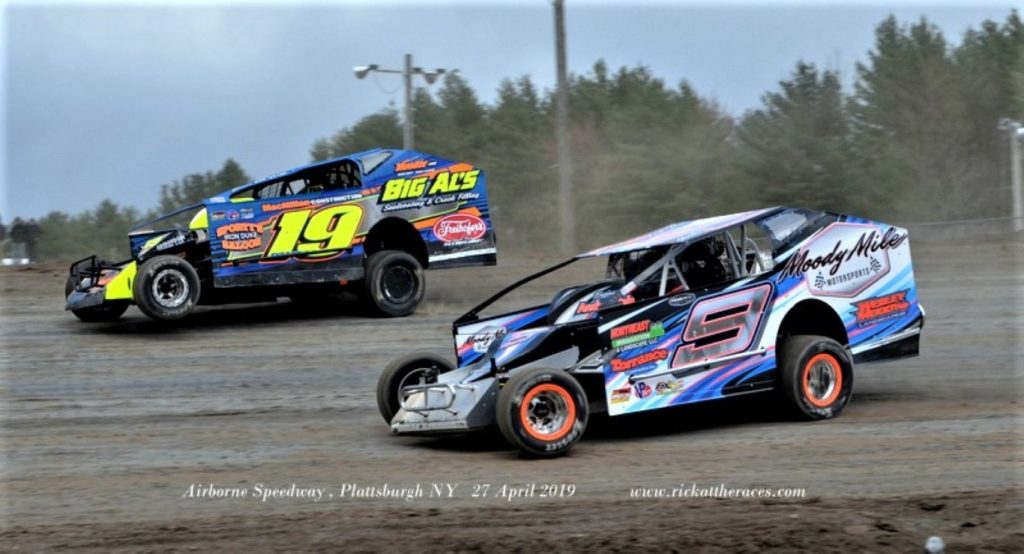 The first Feature of the night was the 40 lapper for Sportsman, but with just 2 laps in the books, we got a light sprinkling of rain. The cars stayed out on the track circulating  for a while, then returned to the pits to refuel, while the track packers took over .

It was only a short delay and in order to keep the show moving, The Modifieds that were lined up ready to go, came out for their 50 lap feature first.

This turned out to be an excellent race where Lance Willix and Steve Bernier played ‘cat and mouse’  up at the front. Willix managed to fight off Bernier for most of the race, only to lose it in the dying laps. Those guys put up one hell of a show. 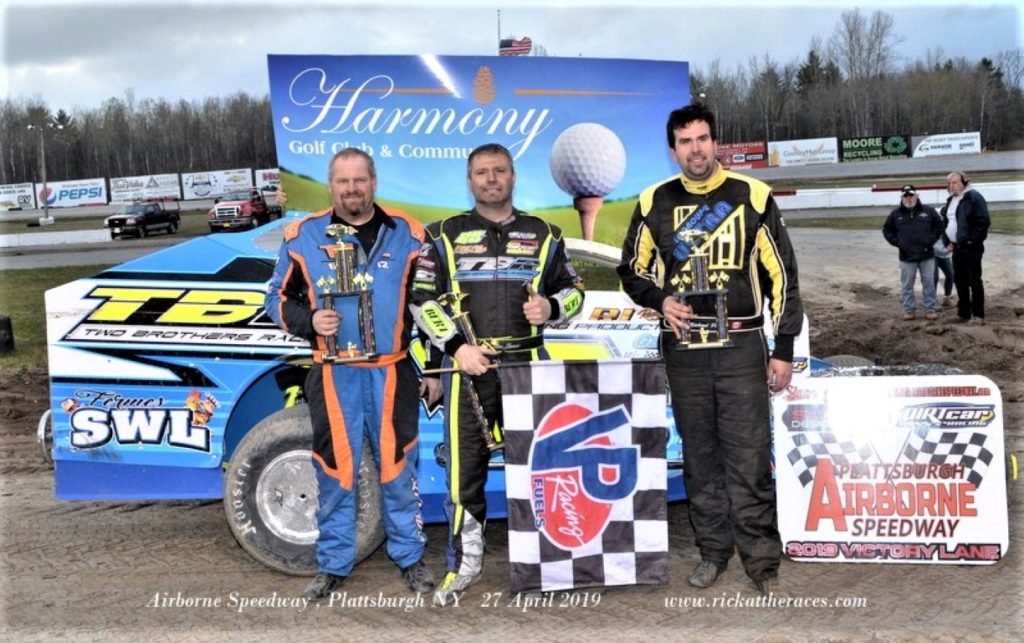 The Sportsman then returned to the track for the remaining 38 laps of their feature. 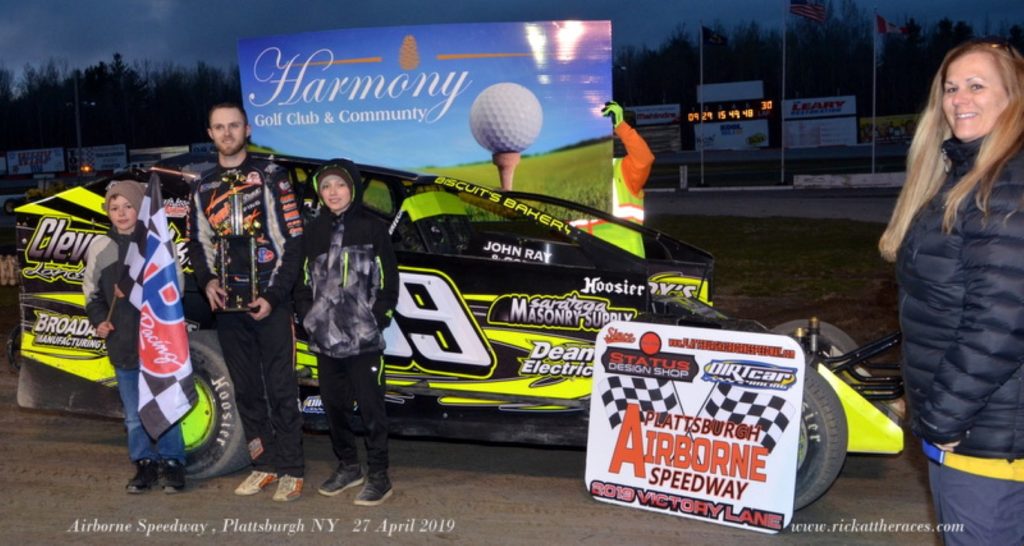 This was dominated through out by Connor Cleveland who went on to take the checkers. My friend Kathy Caldwell had her grandchilden with her, so we got them to present the trophies. 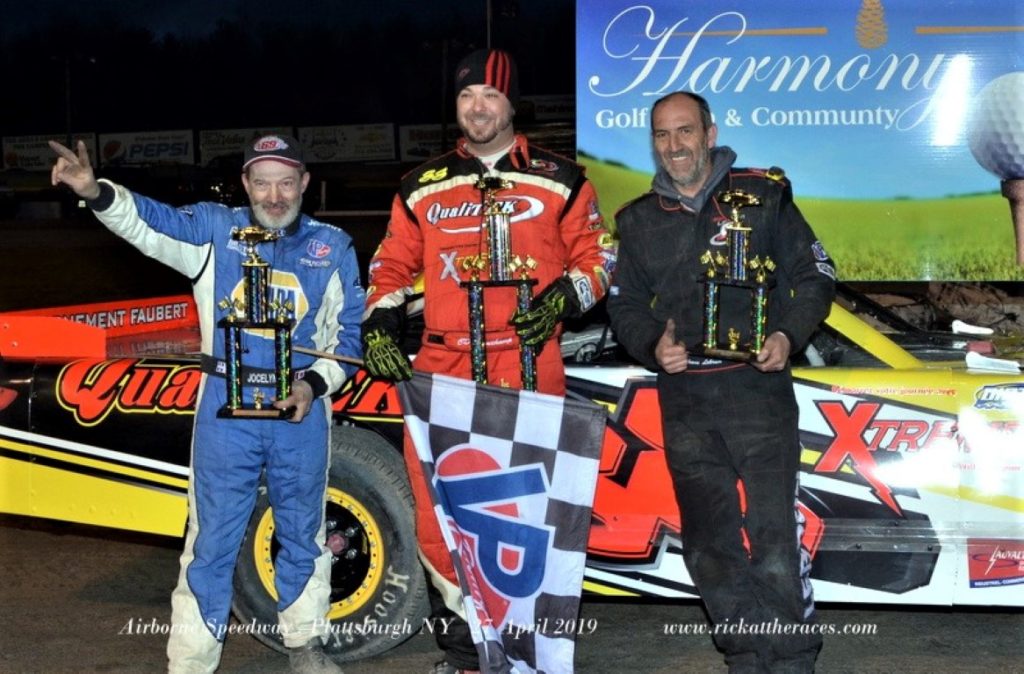 Next up, was the Pro Stock Feature where once again, C.d Beauchamp was the man to beat. Second place went to Jocelyn Roy and third went to Stephane Lebrun. 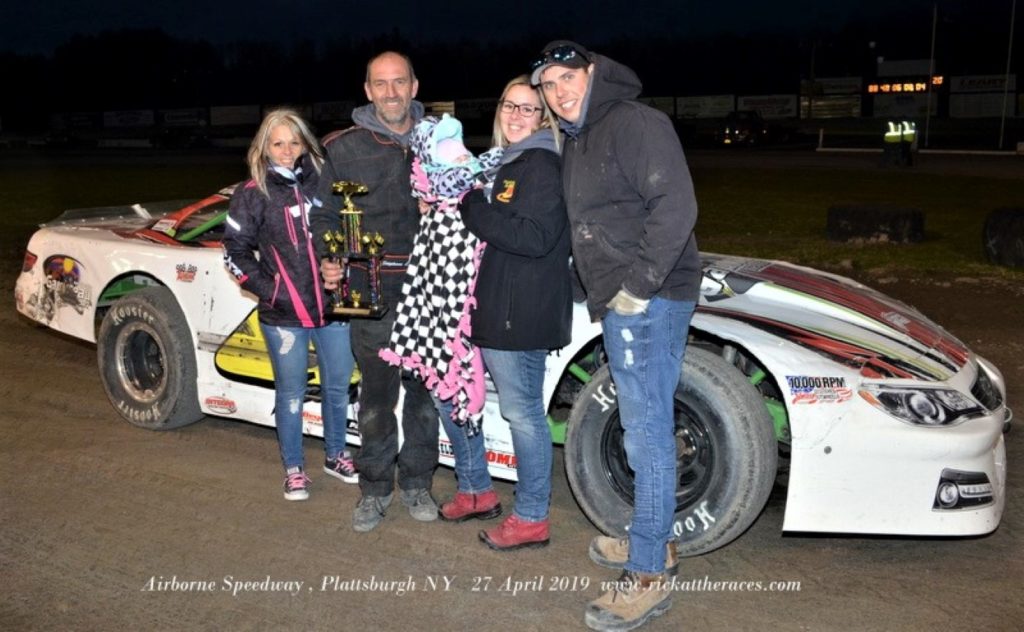 It was the first time at the races for Stephane’s baby grand daughter , so it was good chance to take a nice family photo.

There’d been a lot of cautions in the Sportsman race and it was getting a lot colder, so Don and I decided to ‘pass’ on the main races for Super Stocks and Strictly Stocks, and head back to Canada.

There was no lay-in for me on Sunday morning, as I wanted to be up and ready to watch the live broadcast of the F1 Grand Prix from Baku, Azerbaijan at 8-15 am .

I always enjoy watching this one, as race cars navigate the ancient city. As for this years race, it wasn’t the most exciting I’ve seen , with once again Mercedes getting a one and two.  Valtteri Bottas got the win and Lewis Hamilton came home second. Sebastian Vettel completed the podium in his Ferrari.