This week began much the same as last week , with plenty of rain , that would lead to another weekend of racing cancellations.

On Thursday 16th May, we had a break from all the wet stuff, and it turned out quite sunny for a trip I needed to make to the Ottawa area.

One of the things on my agenda, was to meet up with my good friend Chanty Lesage. Her birthday fell on Mothers Day this year, so we decided, that this would be a good day to have her celebration meal. 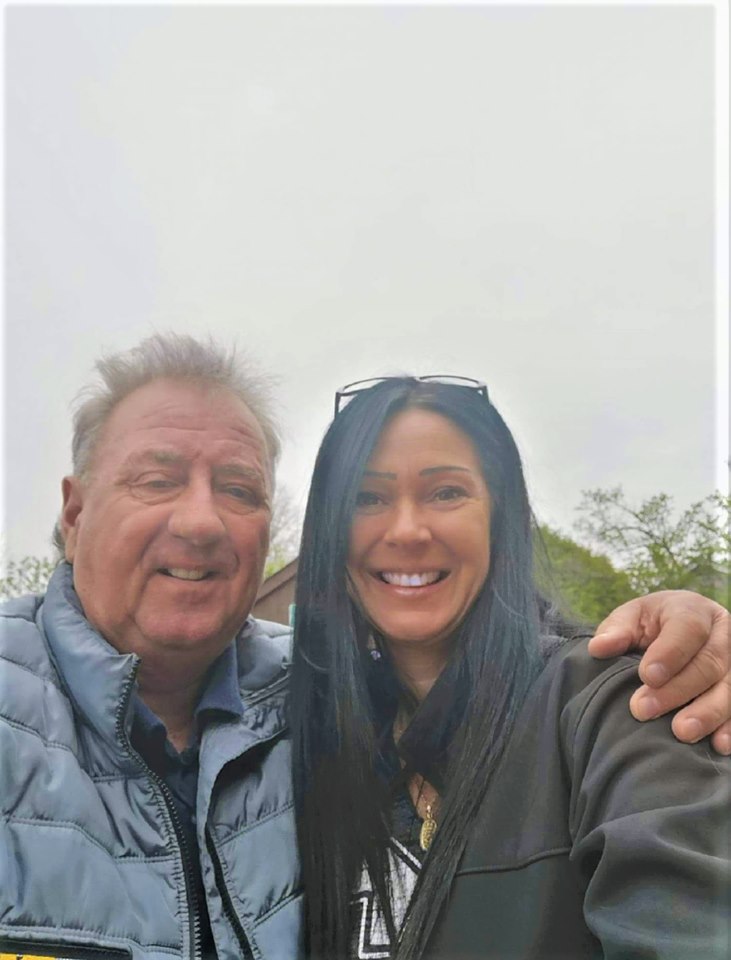 One of our favorite eateries is the Buffets Des Continents in Gatineau so we went there at lunchtime.

In the afternoon I had some things to do in downtown Ottawa, so while I was there , I took the opportunity to take a few pics of the cities sites.

On Friday it was the start of the Victoria Long Weekend in Canada and I had three days of racing planned.

All three of my local tracks had their Season openers taking place.

Mohawk International Raceway on Friday and the Brockville Ontario Speedway on Saturday were postponed openers from the previous weeks rain outs. The Cornwall Motor Speedway had their scheduled opener on Sunday.

Thursday night and into Friday morning the rain returned and it was no surprise when I started to hear  of cancellations.

M.I.R and the Brewerton Speedway NY were both early casualties, but there was positive news coming from the Can Am Speedway at Lafargeville NY. They were confident they’d get their show in the books, so instead of going to M.I.R on Friday.

So, I headed off to Can Am and was there nice and early with plenty of time to chat with friends in the pits.

Gary Tomkins was there, who is driving for Lori and Mike Lasalle’s team this year. 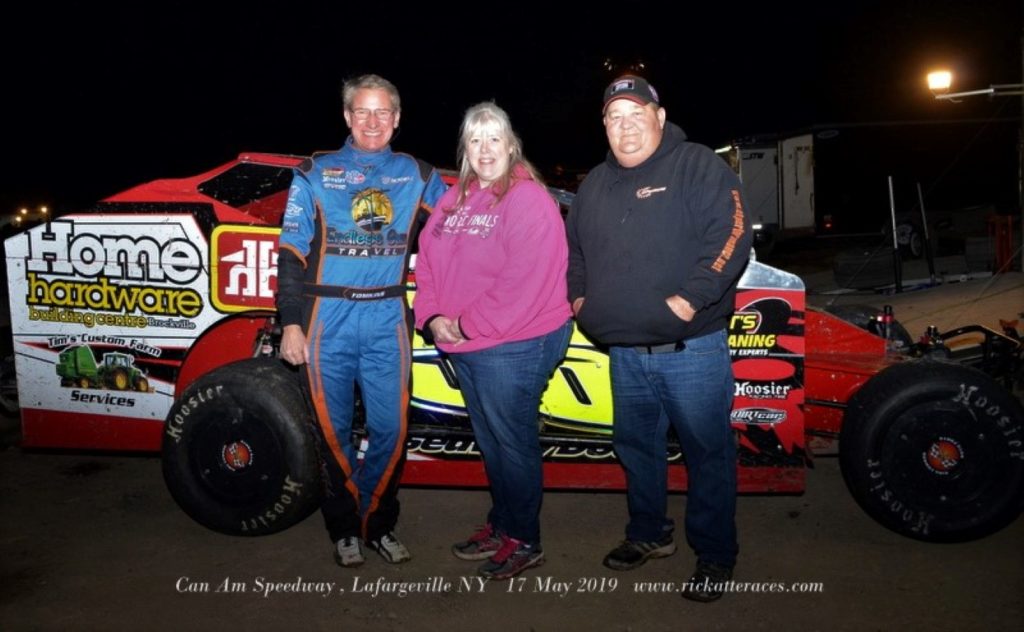 I’ve known all three of them for many years and it’s great to see Gary as their team driver. 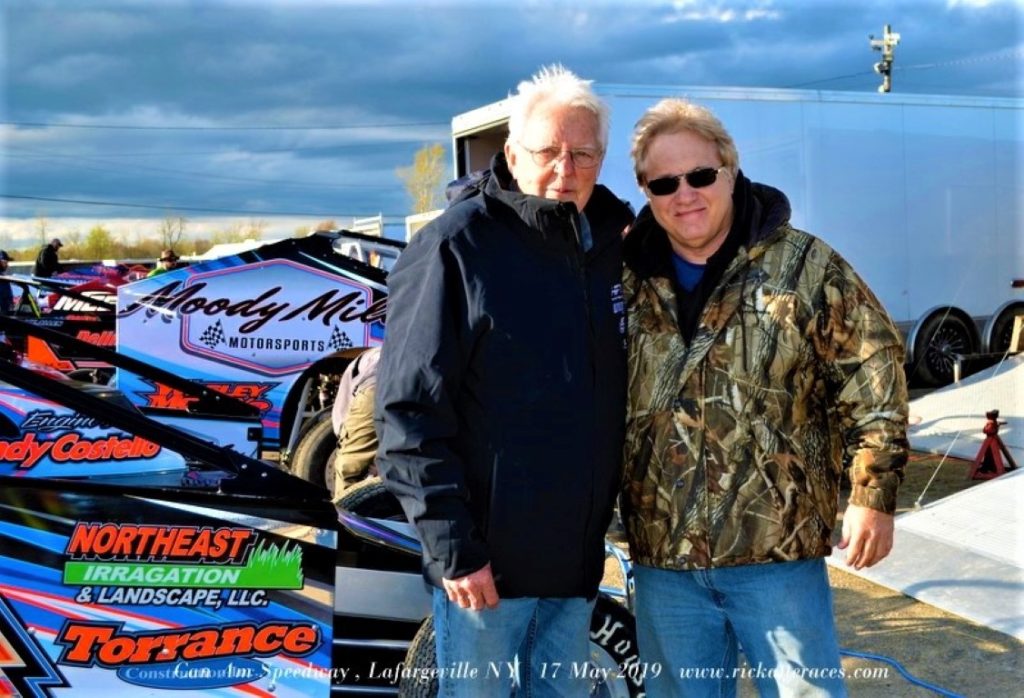 I also bumped into my friend Mike Perrotte, who was with Wes Moody and his Moody Mile Motorports Team.

Wes , is one of the North Easts  dirt racing legends and now has Jordon McCreadie and Patrick Dupree driving for him.

When the racing started ,  I joined track photographer, Rebecca Eisele in the middle by  turn three and four. Rebecca’s father was also out there as he has been a track official on the middle for many years. 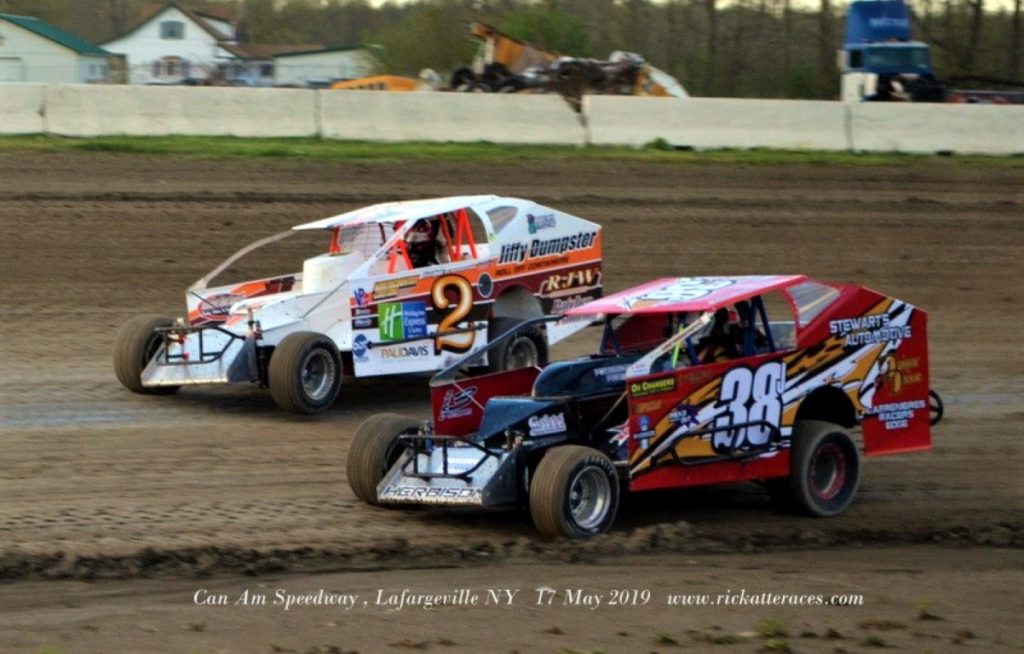 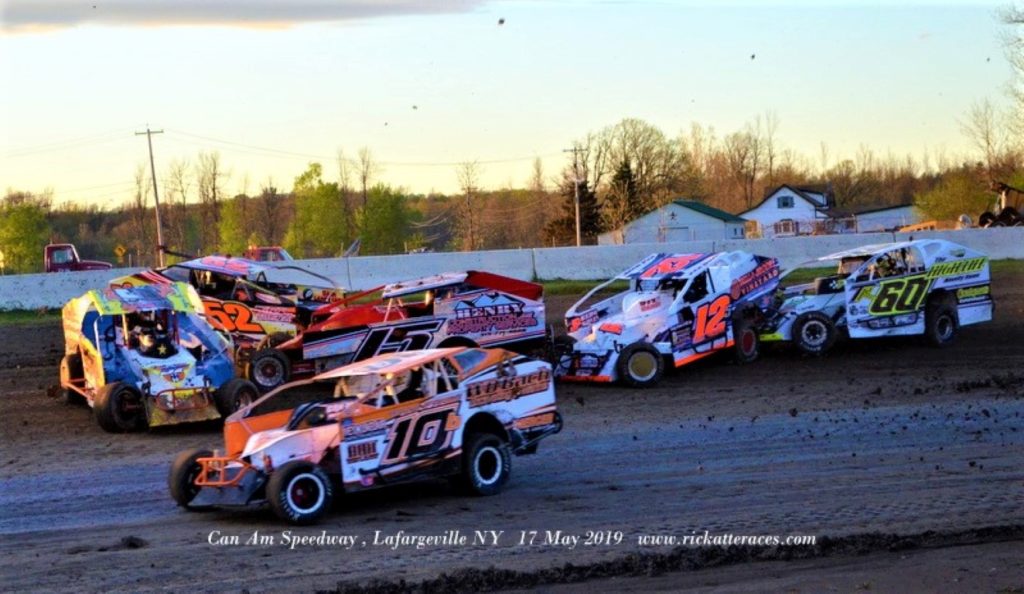 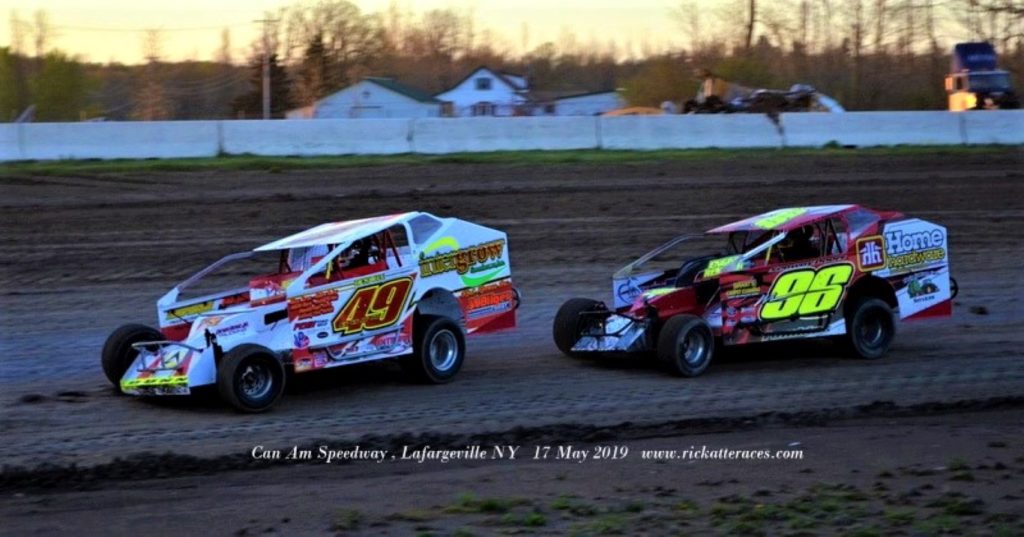 The program consisted of 358 Modifieds, Sportsman and the two domestic 4 and 8 cylinder divisions . Unfortunately , the Sportsman and  Modifieds were the last to have their Features, so it meant, me staying right to the end. 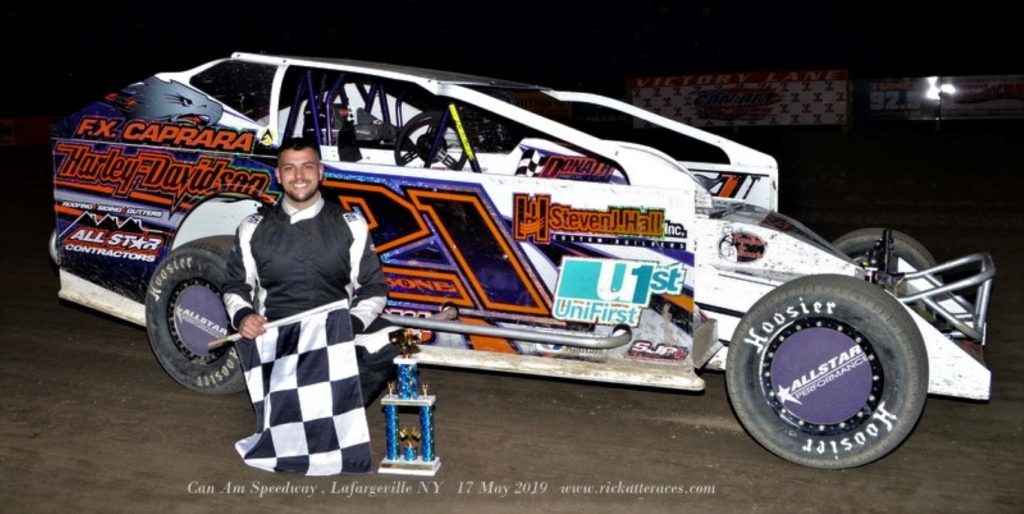 On Saturday the weather forecast for Brockville, looked good and I took a leisurely  drive down there in the afternoon.

On my arrival at about 4-30 the pits were already full, with many new cars making their first appearance of the season.

I had my usual pre race wander around the pits, and chatted with Luke Whitteker and car owner and good friend Ralph Murphy.

Many years back when Ralph’s daughter Tabatha was racing, he was one of the first to publicize Rick at the Races, and has always had my stickers on his cars. 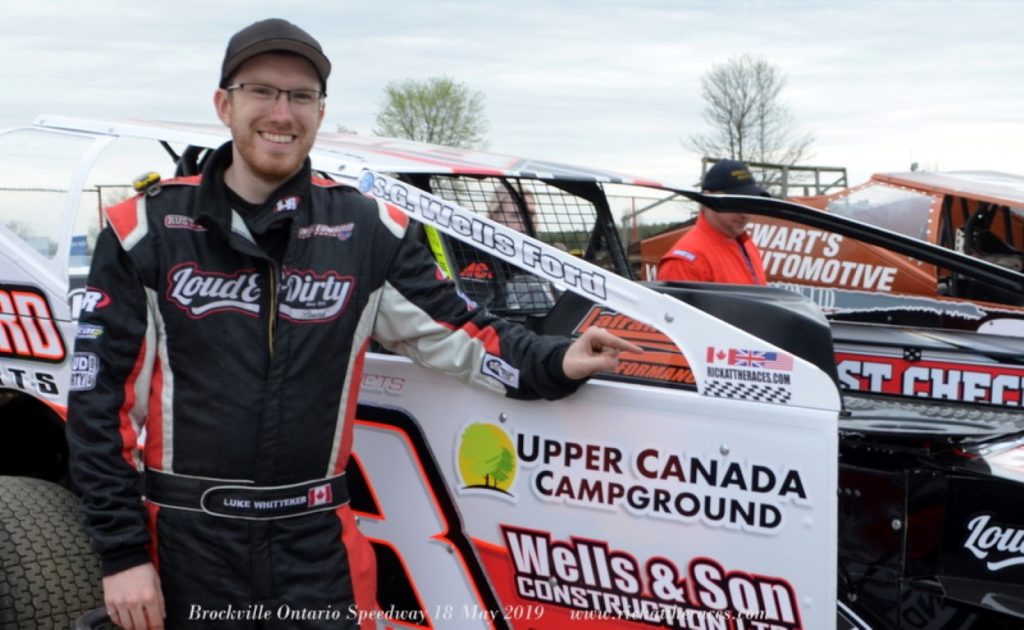 This years car is no exception, and one each side was added to the front pillar.

Luke’s girlfriend Taya is also a good friend of mine and for the past four years has been the Victory Lane Hostess.

As  Luke and Taya  have now moved to Sarnia, Ontario, she has had to give up her Speedway job.

She was busy that night training Emma the new Victory Lane hostess.

It was obvious it was going to be a long night, with some extra practice sessions before the racing, and a full program of 358 Mods, Sportsman, Rookie Sportsman, Vintage Mods, Street Stocks and Mini Stocks. The Street Stox had a 50 lap race, that took place before the Modifieds and Sportsman. There were 19 Modifieds in attendance, and over 30 Sportsman.

I took up my usual spot on the middle, on turn one and two. 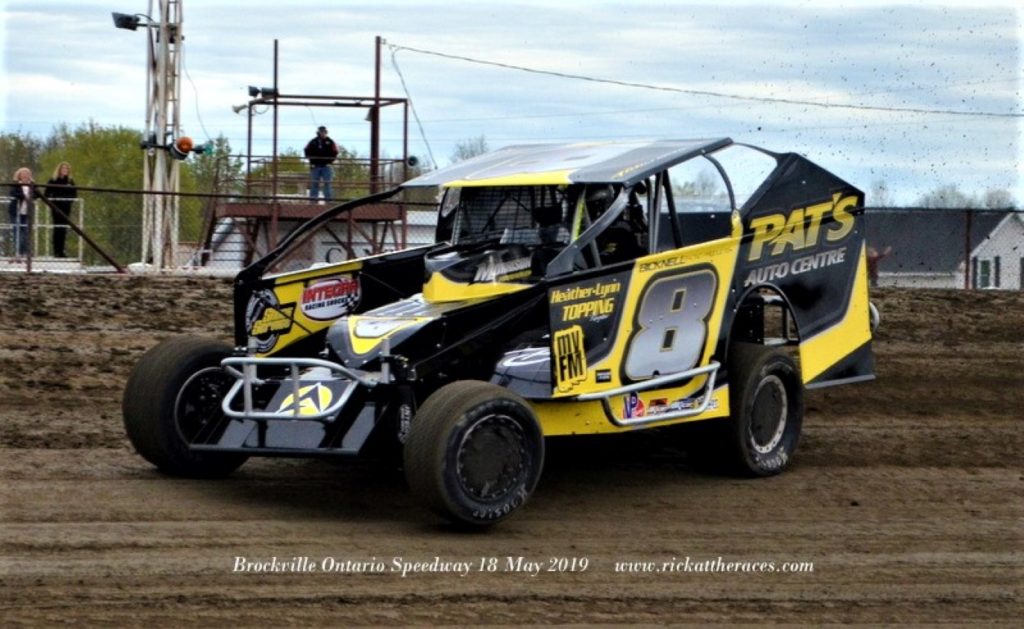 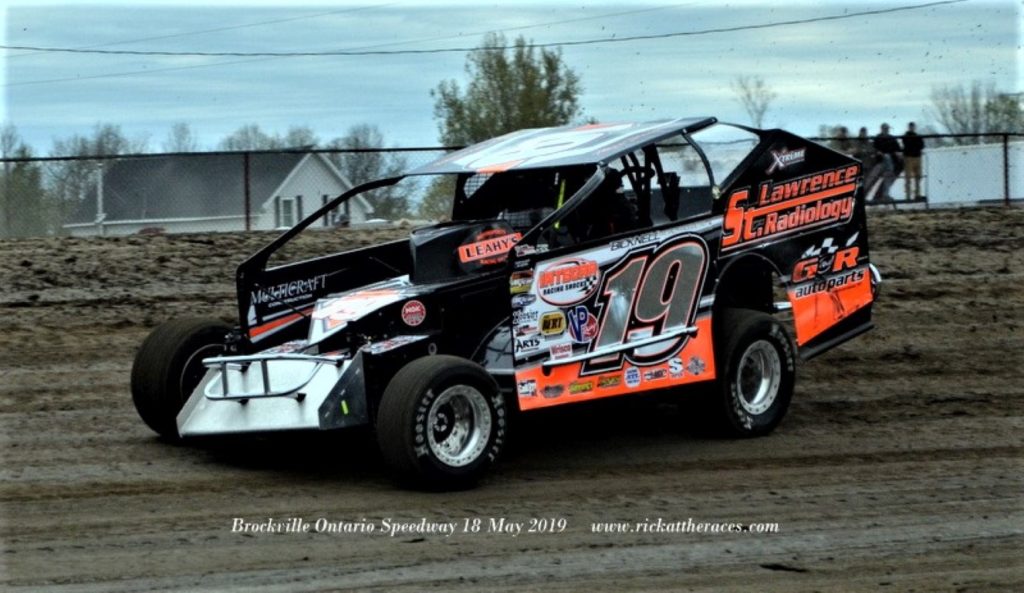 First of the features, was the for the Vintage Mods and was won by Kenny Polite. 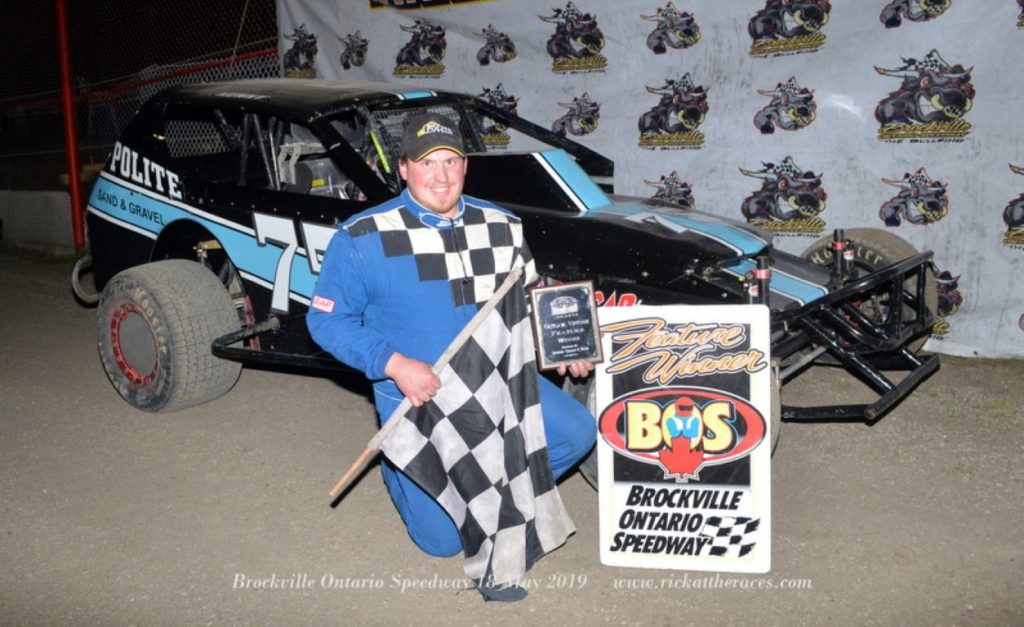 Next up was the 50 lapper for the Street Stocks, and even though a marathon event, the racing for first place was quite good. 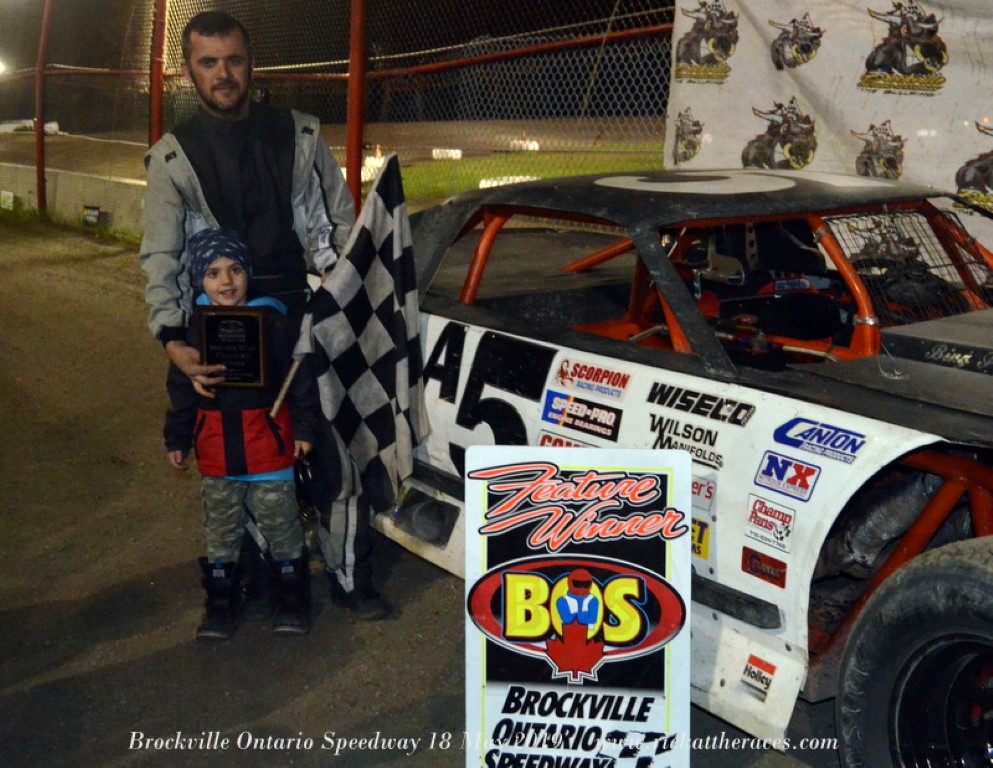 The Modifieds were next and this proved to be a great race , with a race long battle between Tim O’Brien and Ryan Arbuthnott. 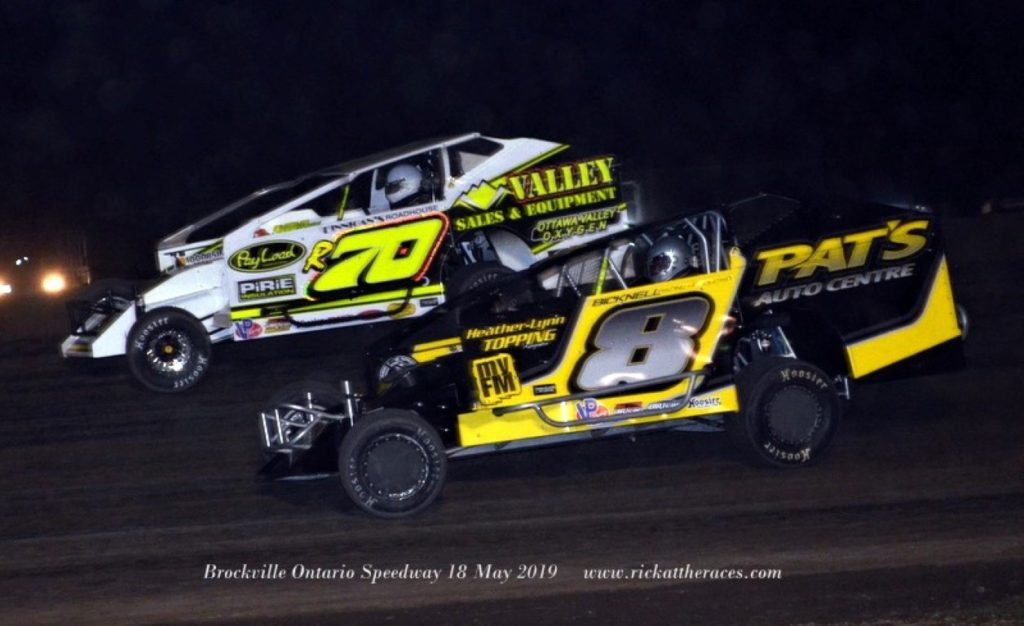 At the checkers it was Arbuthnott.

Time was marching on and it was a few minutes before mid night when the Sportsman feature came to an end,  four laps short , when rain started to fall. 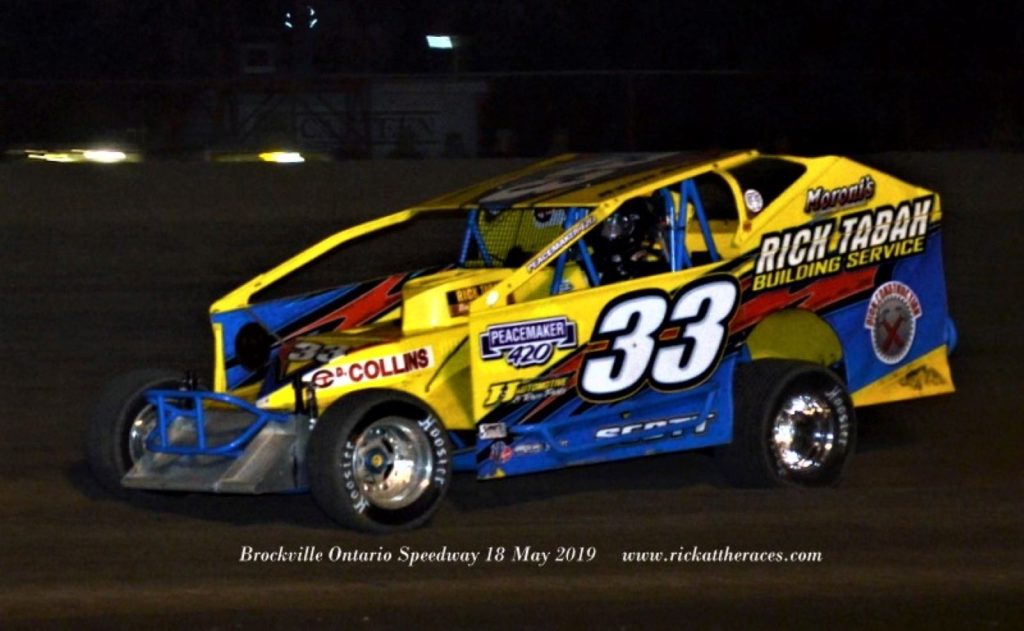 Ryan Scott , was leading at time with Shane Pecore  second.

As the rain came down , I headed for home.

Once again the weather fore-cast for Sunday, wasn’t good, and an enthusiastic program of long-haul events were on the program at the Cornwall Motor Speedway .

I must admit, I never expected this one to get in the books, but I’m pleased to say I got proved wrong.

The headline event of the day was a 100 lap Canadian Nationals for 358 Modifieds, and there was another 100 lapper ,  the ‘Race for a Cure’ Sportsman Series. Add to that the Pro Stocks and Mini Stocks, and it was quite a busy night.

Rain was forecast about 11-00 pm so the show was rushed through as quickly as possible. 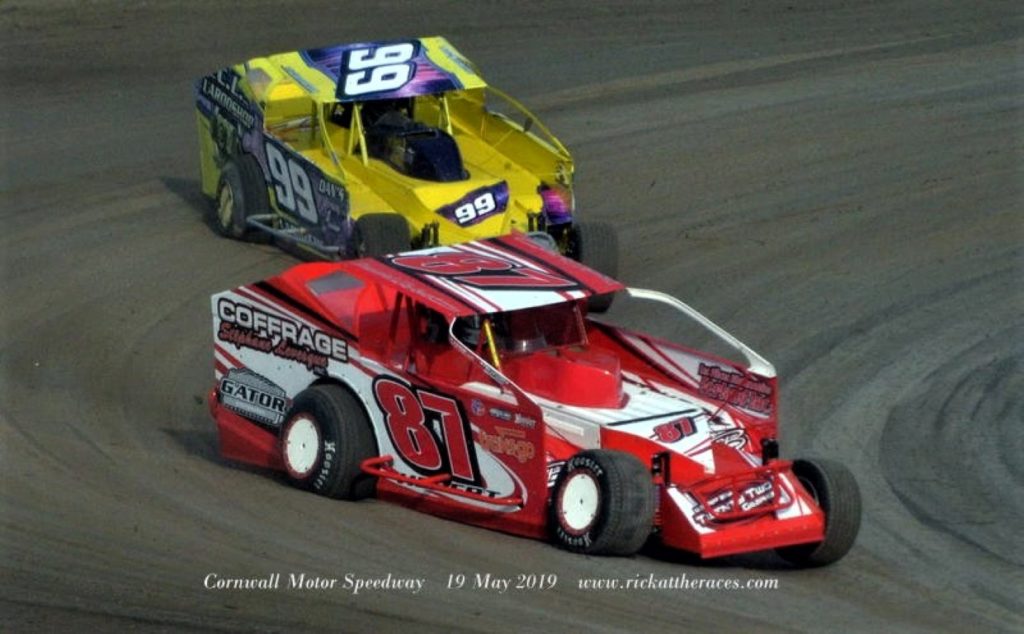 As normal , I  shot my heat race pictures from the pit tower before moving to the middle for the features.

I’m glad to say, the Modified Feature was the first to be run, and it turned out to be a very good race. 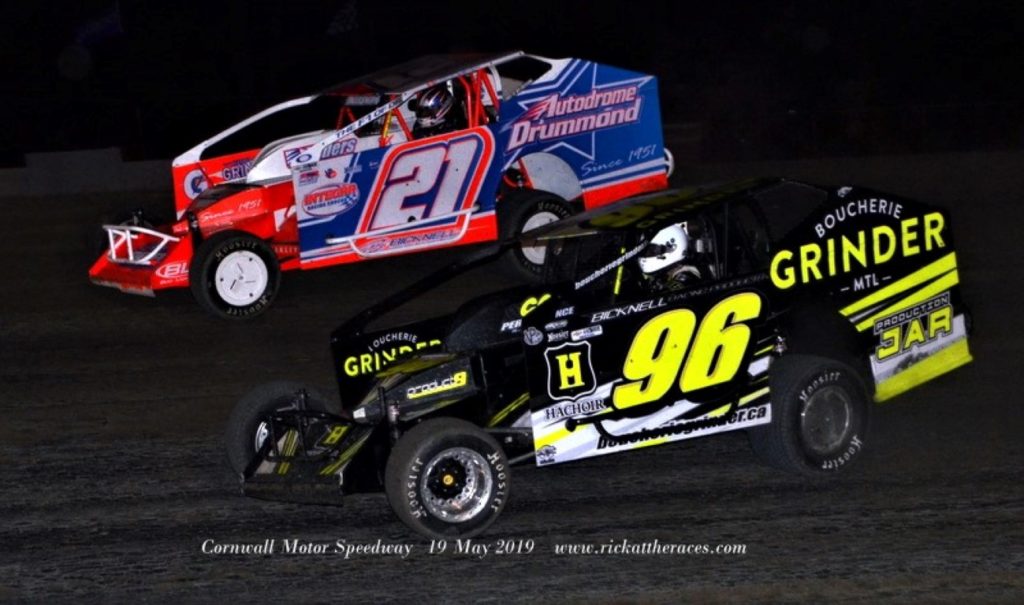 Yan Bussierre  and J.F Corriveau dueled it out at the front for most of the 100 laps. 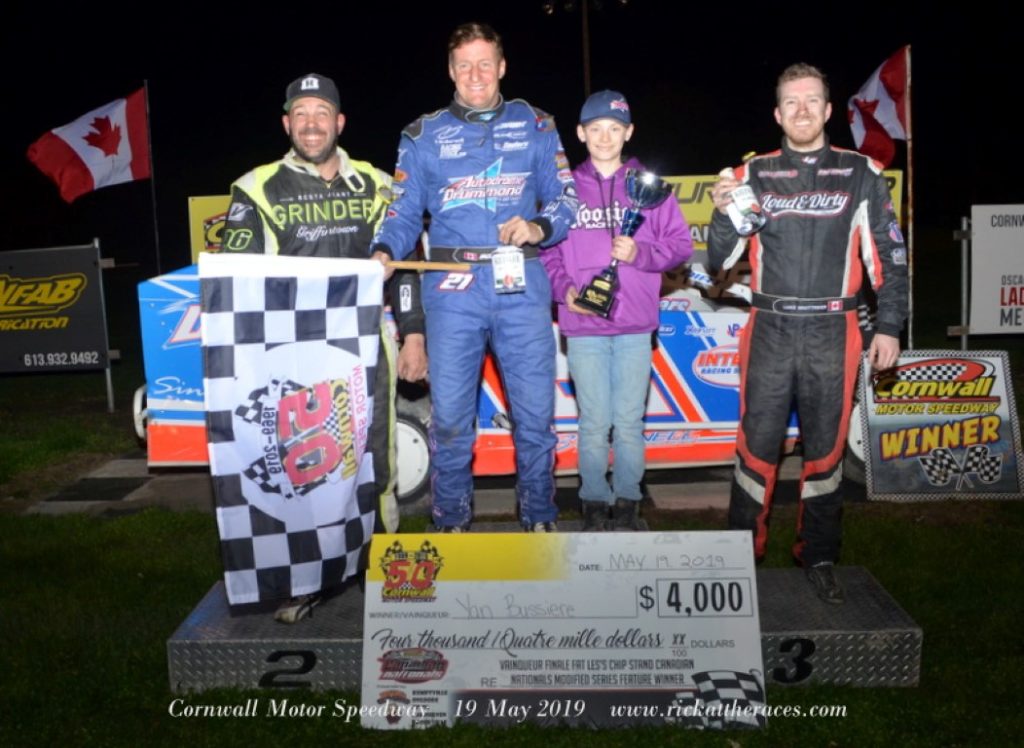 Bussierre held on to the lead as the checkers fell with Corriveau and Luke Whitteker in hot pursuit.

It was a very emotional win for Yan, who hadn’t been in Cornwalls Victory Lane since 2007. 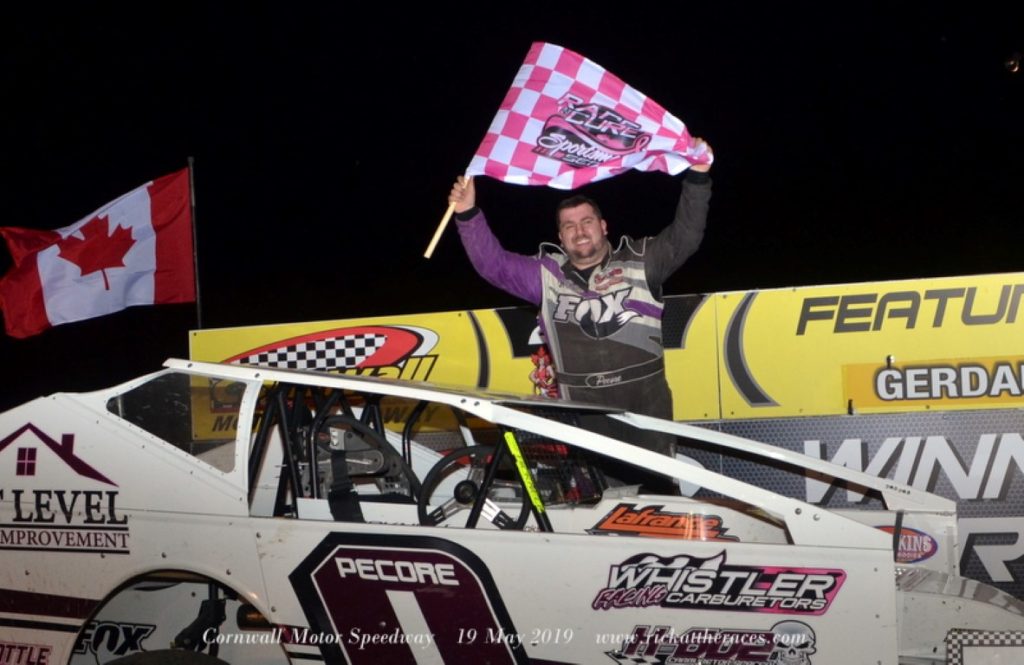 The next race was the Sportsman Feature , which after numerous stoppages and cautions was won by Shane Pecore. 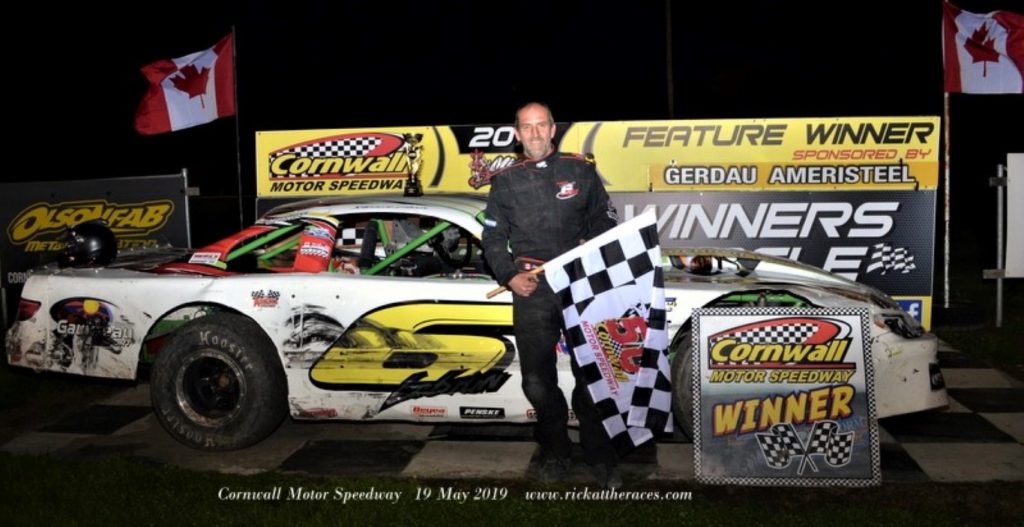 Up next was the Pro Stock Feature , and this was won by my good friend Stephane Lebrun.

It was now 11-00 pm, and with the Mini Stocks Feature , the remaining race of the night,  I made my exit.

I live ten minutes away from the track, and by the time I pulled into my driveway, the rain had started to fall. I later found out , they got the last race in,  just in time, as the rain came down, shortly after the race was over.