The past week, I had a busy schedule with the medics, in regard to my on going Myasthenia  Gravis condition. Things began on Tuesday and Wednesday (30 April / 1 May) with two days of I.V.I.G  transfusions at my local Cornwall Hospital which were followed up by another appointment, for a pneumonia shot.

Once these were out of the way,  I had the weekend of racing to look forward to. My plans were to attend  at least two out of these three events, the Brewerton Speedway opener on Friday (3 May) Airborne Speedway on Saturday (4 May) and the Utica-Rome Speedway on Sunday (5 May) .

As Friday approached all the weather forecasts indicated doom and gloom for Friday, with the more ‘summer like’  days coming  Saturday and Sunday.  Rain was predicted all over the North East, for Friday , and sure enough Brewerton became an early casualty.

My other possibilities for that night, the Can Am and Albany-Sarratoga Speedways were also cancelled. So it became a night home in front of the TV.

With good weather on the cards I was eagerly awaiting Saturdays trip to Plattsburgh NY and the Airborne Speedway.

On Saturday I joined ‘Tog’ buddy Don Simpson for the short drive to the track and we arrived around 3-00 pm as the pit gates were opening up.

The meteorologists had got it partly right, it wasn’t raining, but  definitely not,  ‘summer-like’ conditions. This however , hadn’t distracted the car turn out, as the pits were full to capacity with Dirt Modifieds, Sportsman, Pro Stocks, Super Stocks and Simply Stocks.

The headline event of the night was a DirtCar Series event for the Sportsman, and there were about 45 of them in attendance. The Modified and Pro Stock numbers were also up  quite a bit from the previous week.

One surprise addition to the Pro Stocks ranks was Brian Carter from Charlotte, NC.

Brian of course is better known for his position as the C.E.O of the World Racing Group who control the World of Outlaws and the DirtCar organization. 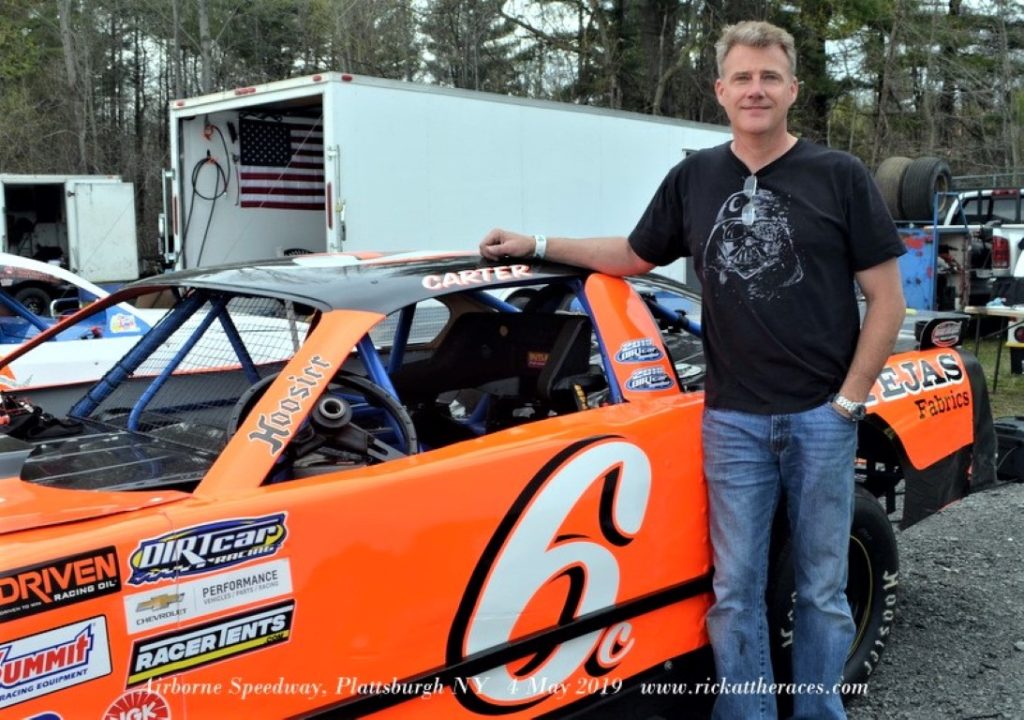 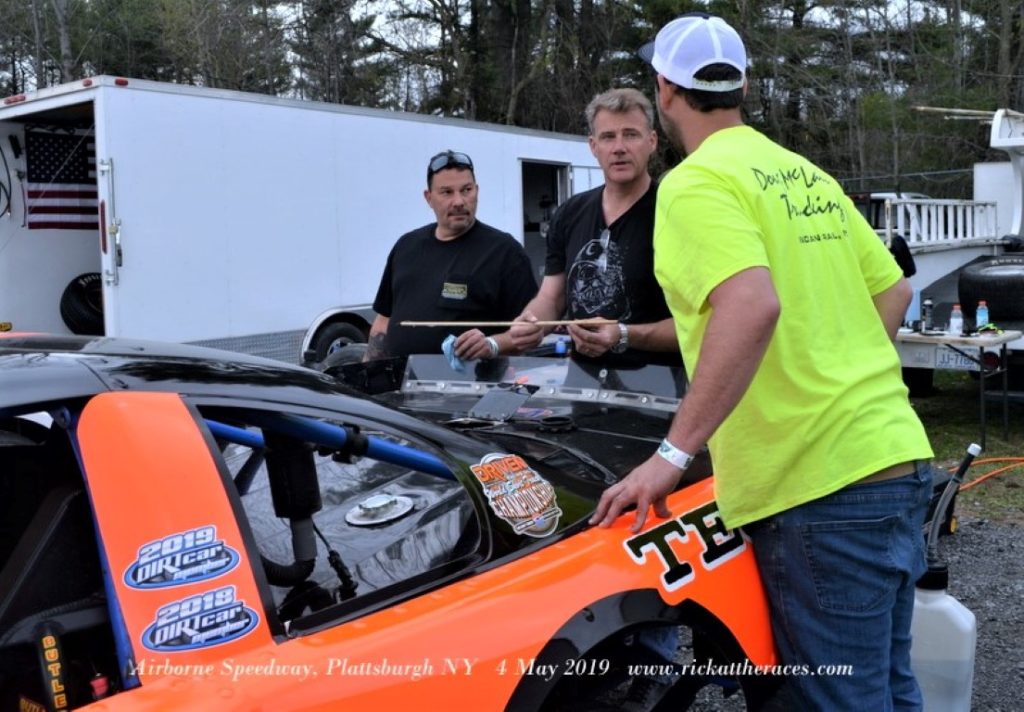 I first met Brian back in 2009, when the World of Outlaw Late Models visited the Cornwall Motor Speedway. He told me back then that he still likes to get behind the wheel of a race car when he gets the chance, and this was what he was doing.

I managed to have quick chat with him , during my pre race wander round the pits. 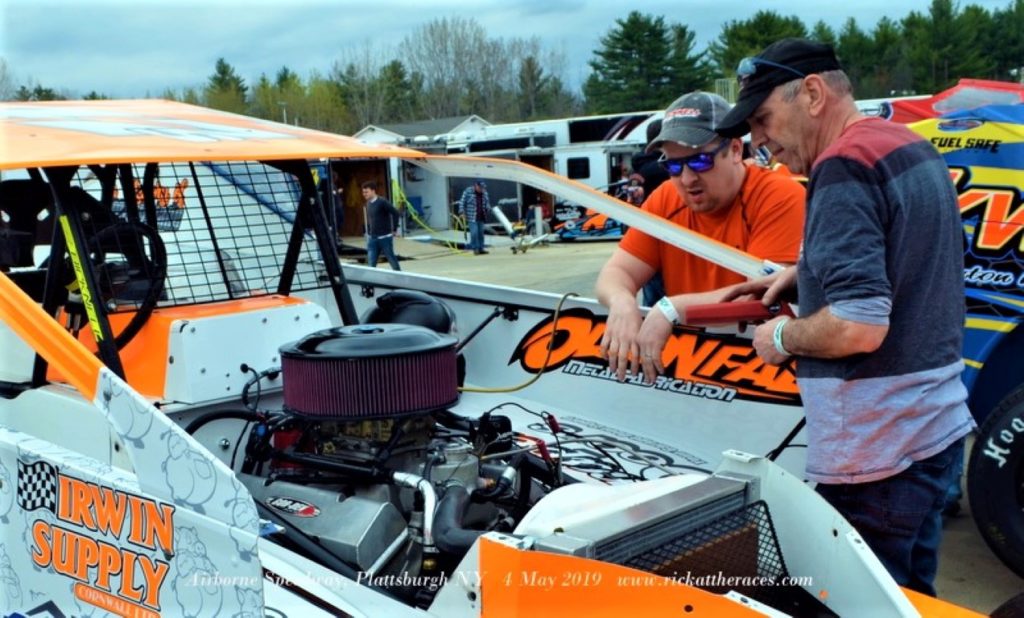 I also had a good chat with Laurent Ladouceur, who’d been assisting under the hood of Corey Wheelers car. 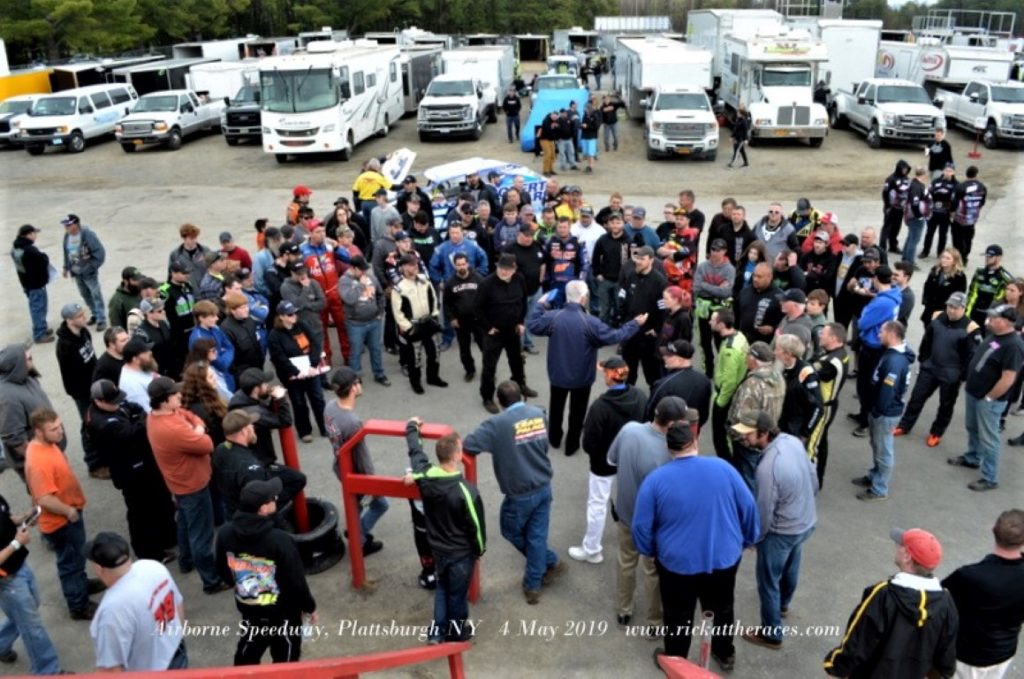 I listened to Denis Moquin hosting the drivers meeting before taking my usual spot on the center, in turn one and two.

Don and I were joined out there by three media ladies, Billy Jo Branham who was taking pictures, and Mandee Pauch and Emelie Sauve who were doing video Vlogs.

With so many cars in the pits, tech inspections took longer , so the nights schedule was put back 30 minutes . 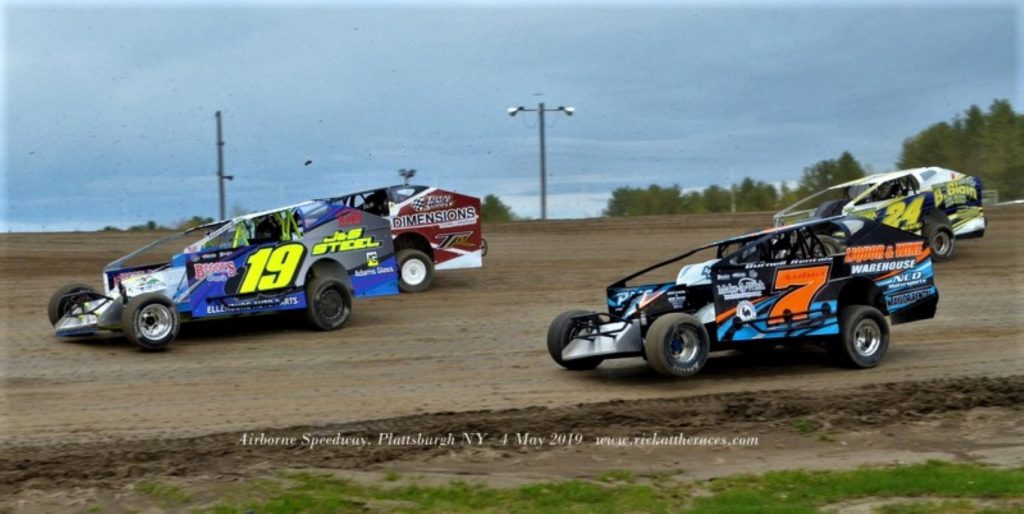 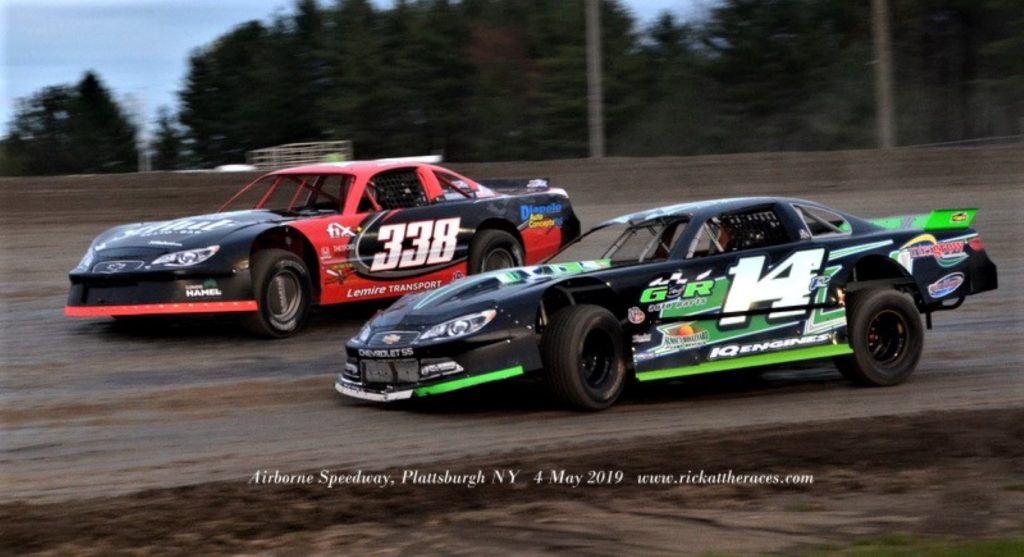 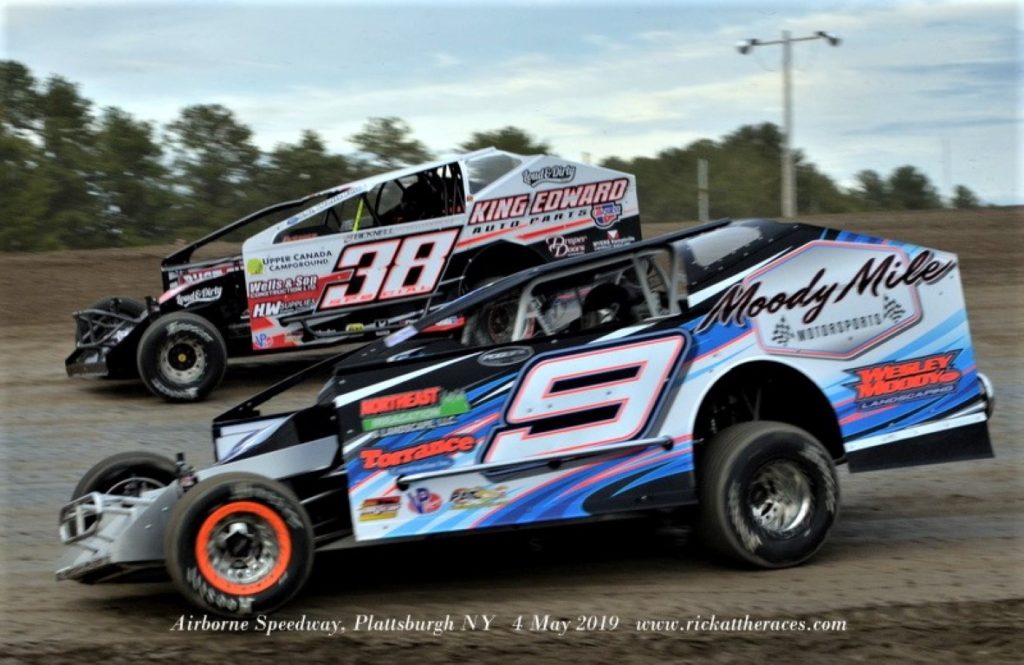 Once again the track was in excellent shape, which provided us with some great racing . Hats off to track prep man,  Josh Laware.

First of the feature races was for the Pros Stocks, which had a very exciting finish. 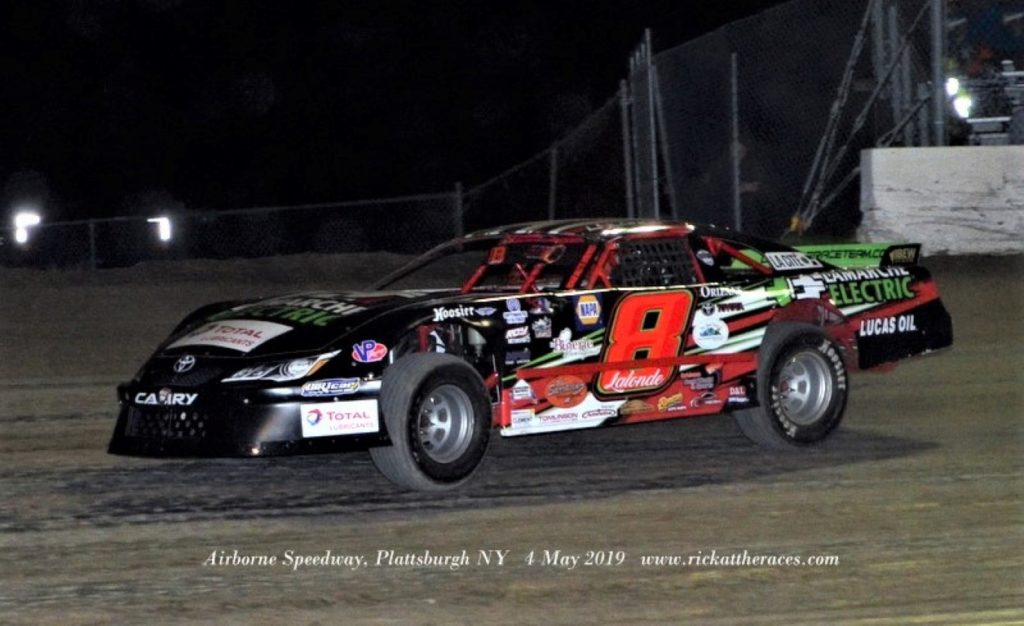 Long time leader Marc Lalonde # 8 was challenged in the closing laps by track champion C.d Beauchamp, but managed to hold him off, as they raced side by side for the last two laps. 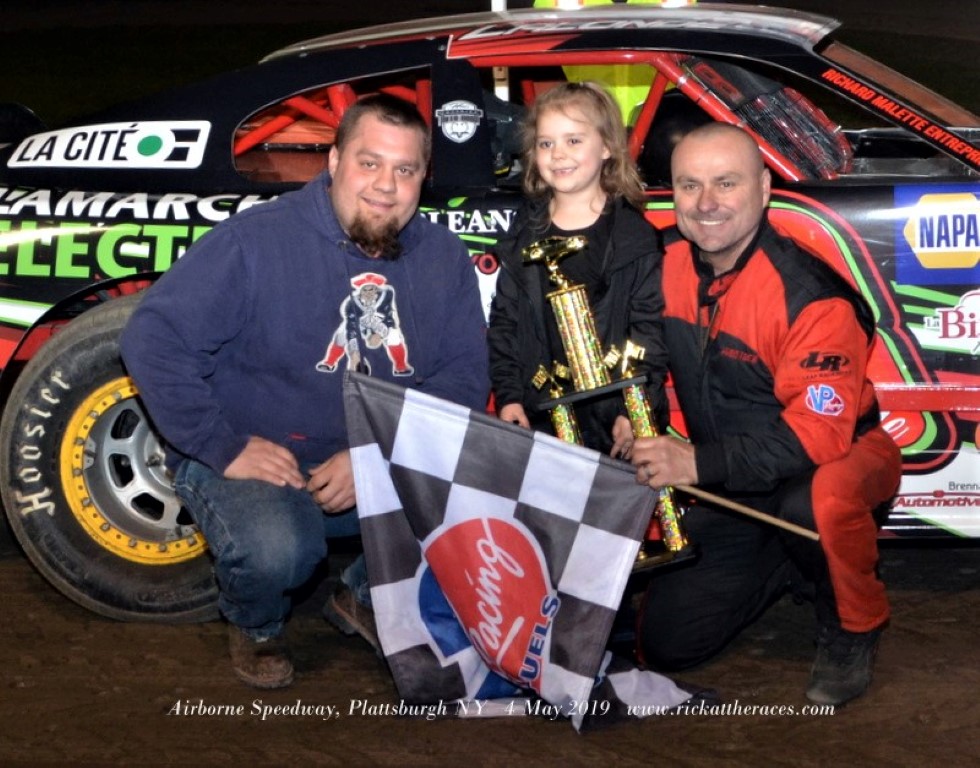 Next up was the main race of the night, the 50 lapper Series Race for Sportsman.

I must admit , I expected that 50 laps and a lot of cars would be burdened with cautions, but I was happy to be wrong. The race went for half the distance before the first yellow flag was thrown. 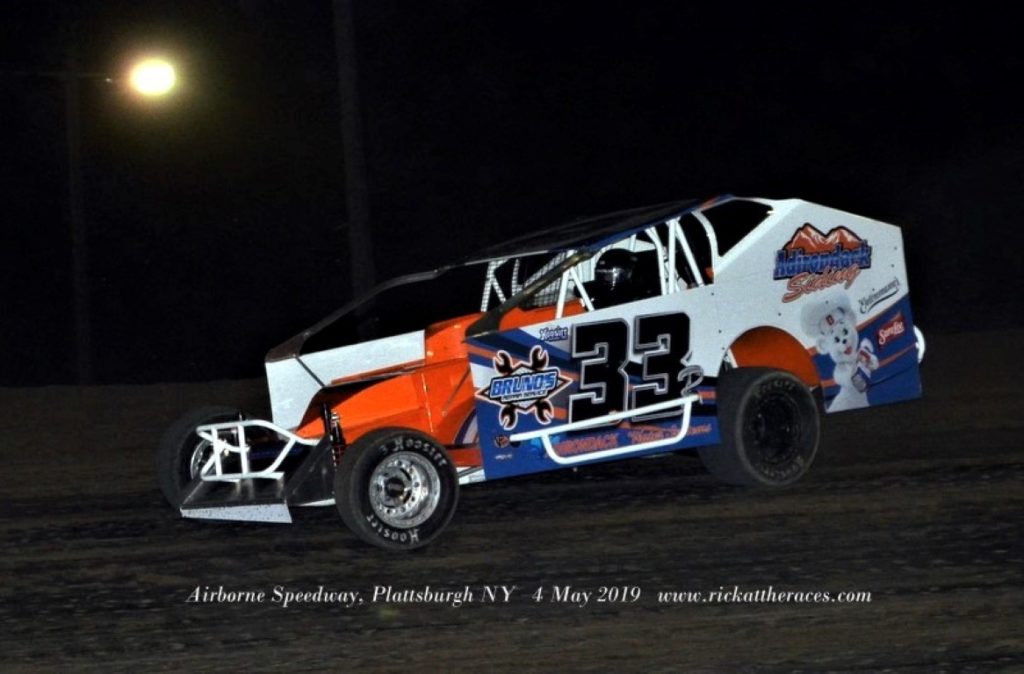 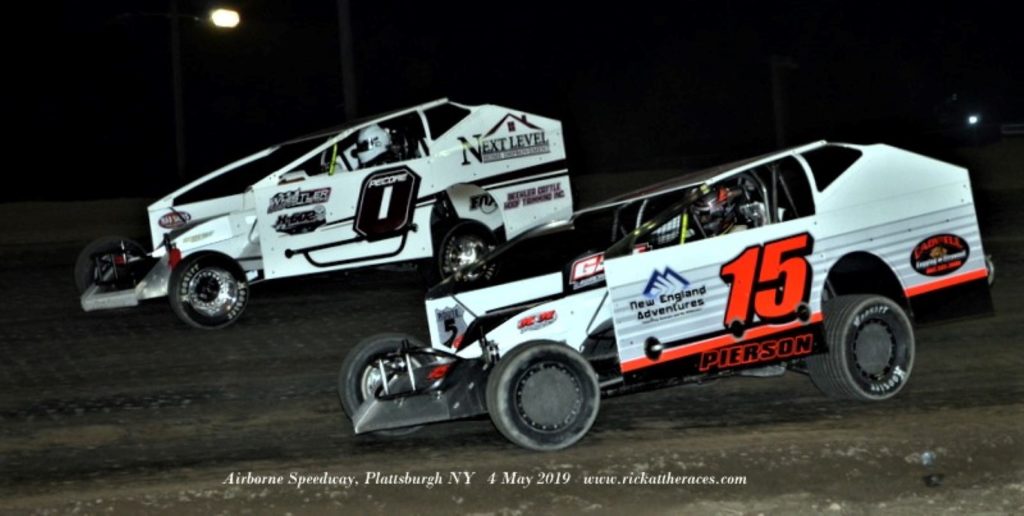 The second half of the race turned out to be a very exciting affair, with the first three places being in doubt,  as they kept trading for lead.

Shane Pecore # 0 , Adam Pierson # 15 and Travis Bruno # 33R, were all up there, but it was Bruno who was in front when it mattered. He was followed by Pierson in second and Pecore in third. 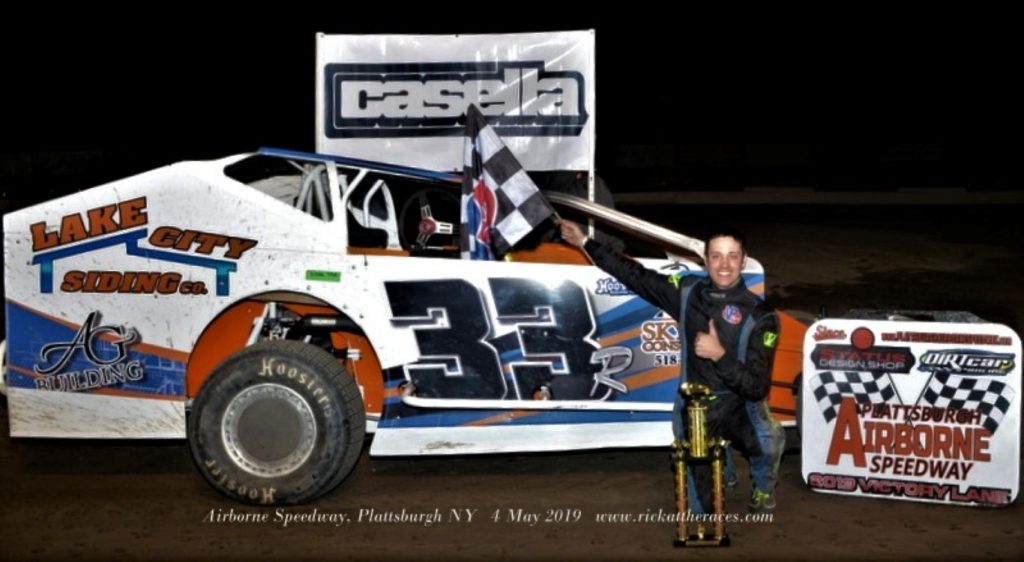 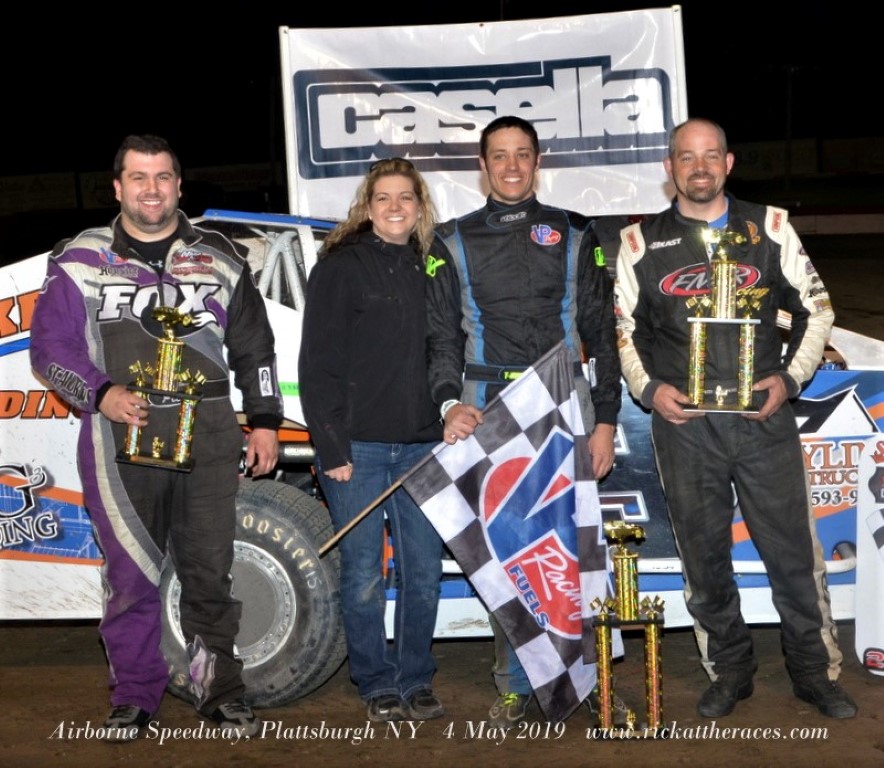 It was now time the 30 lap Modified Feature.

With the track champion and multi feature winning Steve Bernier # 25 starting at the front, you would  been forgiven if you thought the result was a foregone conclusion, but you would of been wrong. 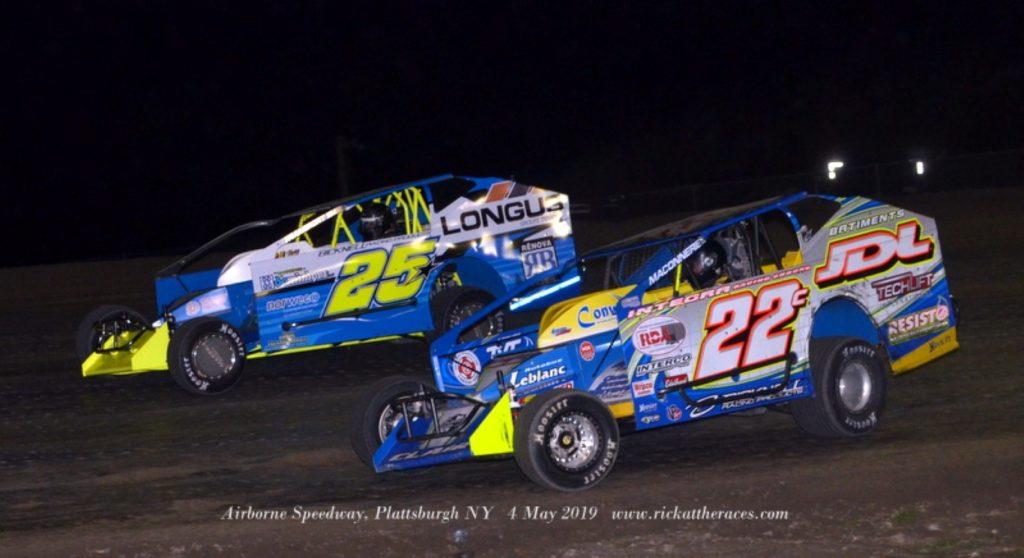 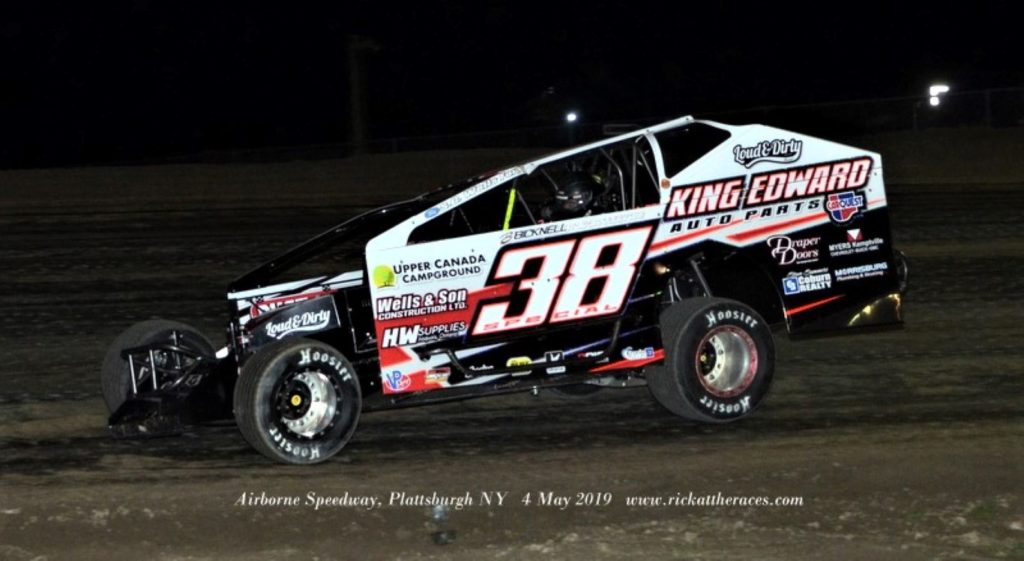 From the green flag,  Bernier was challenged by fellow Quebecer, Mario Clair # 22c with both of them sharing the lead for most of the race.

Then things started getting interesting.

It was very noticeable that the fastest car on the track was Luke Whitteker # 33, as he worked his way through the pack from a mid-field starting slot. His car looked as if it was rocket powered,  as he caught up with Bernier and Clair, then passed with ease,  with just a few laps remaining.

Clair came home second, and Bernier had to settle for third. 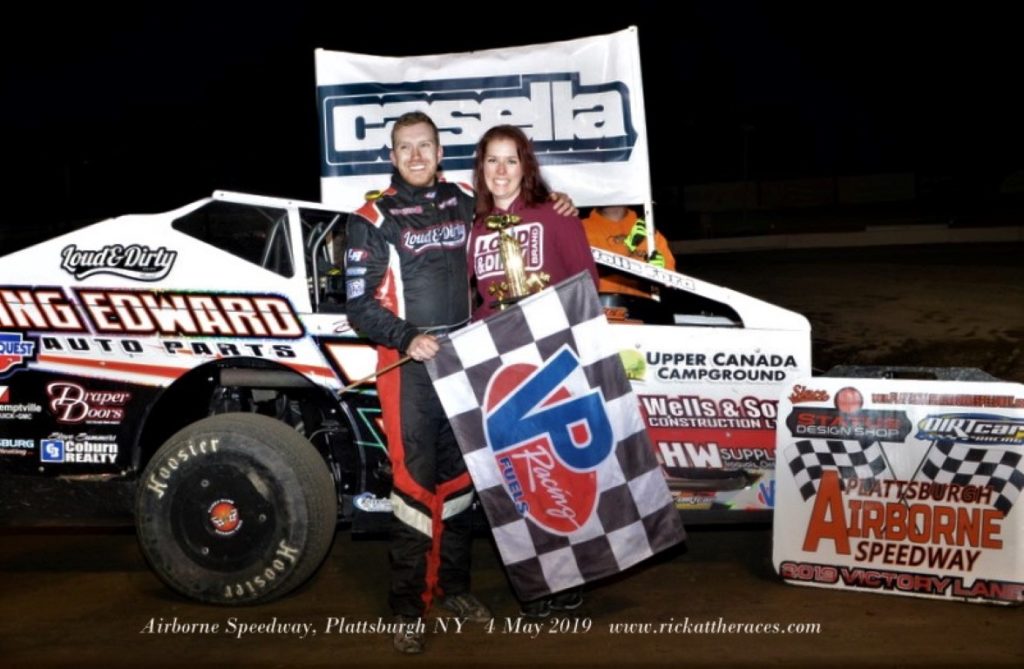 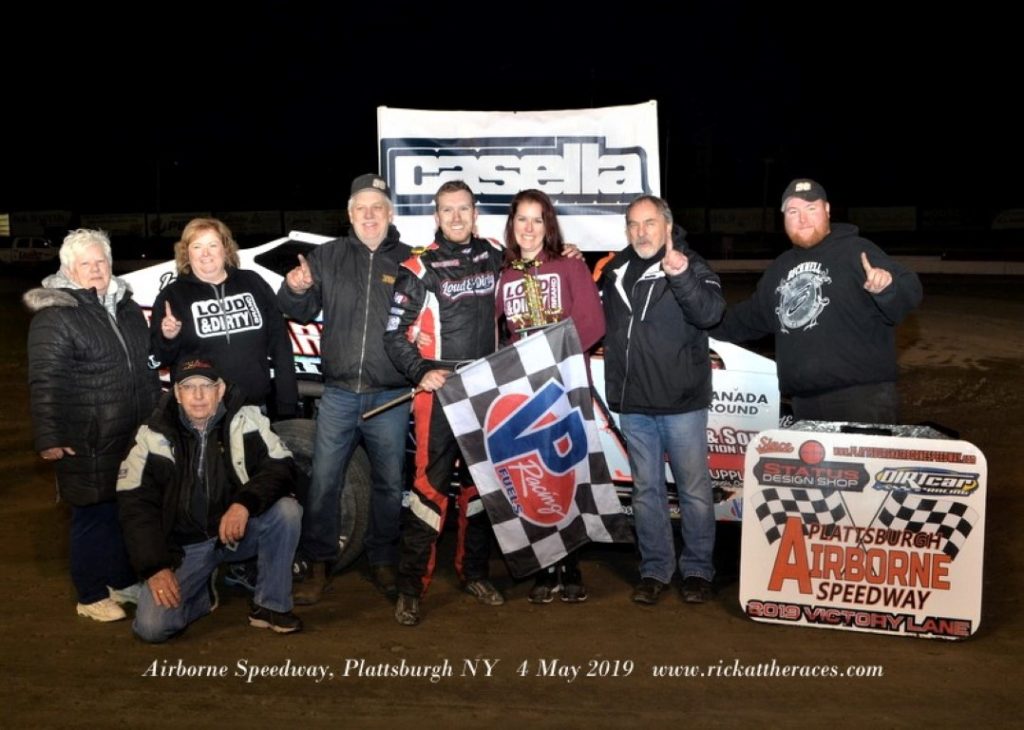 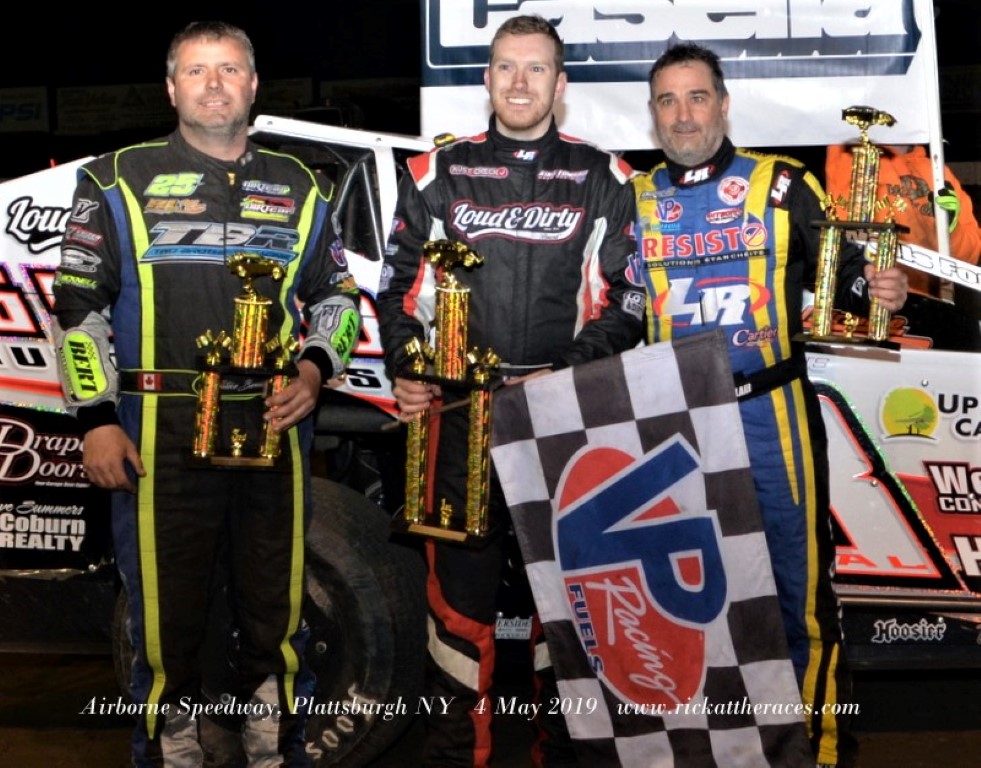 When you have seen as many races as me, it’s not very often I give it  a “Wow” factor.

Ironically, Luke who now lives in Sarnia , Ontario , was the Modified driver who traveled the furthest to be there. It’s probably a ten hour drive.

As usual, Don and I made our exit, and headed back to Canada after we’d done our Victory Lane pictures.

With our Friday racing lost to rain, Don and I decided to head for the Utica-Rome Speedway for their Sunday night show.

We were tempted by the ‘summer like’ weather that had been in the forecast.

We set off mid day and the sun was shining as we crossed the border into the USA from Canada. By the time we got to the Syracuse area, the sky was getting grey, and the sun roof on the car had to be closed. It didn’t look good and as we got ten minutes from the track it began to rain. Not much, just a little drizzle, but the sky looked full of it.

We  carried on to the track as it continued to come down, and  arrived at 4-00 pm, to find a line up of race haulers waiting to enter the pit gate. We parked the car and chatted to a couple of our driver friends Dale Planck and Billy Dunn as we waited to see what was happening.

The light rain still kept falling, and it looked all set for the night, then at around 5-10 pm the announcement came over the speakers, saying the racing was off.

In recent years this track has had more than it’s fair share of bad luck regarding rain , and they have yet to get in their season opener.

As for my personal record , it has to be my ‘bogey’ tack for rain-outs. After three attempts previously I finally got to see my first race there in 2003.

It was for the 2003 Dirt Series races for small block Modifieds and Pro Stocks.

Since 2003, I’ve been back there a few times, as well as having  a few more failed attempts.

Once we heard the announcement, just like everyone else , we fired up our engines and headed for home.