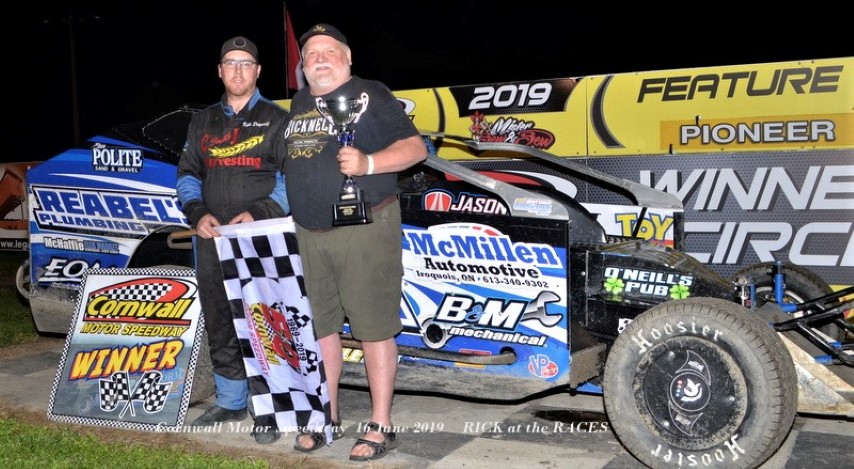 As we move into the middle of June, the weather has still yet to turn seasonable. We seem to be getting one bright and sunny good day to every two, wet and miserable ones. It’s been playing havoc with my local racing.

Not much happened for me during the week, apart from a Wednesday trip to Henrys in Ottawa for something  I needed for my camera.

During the  lead up to the week end I found myself doing something I’d never done before.  I have never sat and watched the sport of basketball, I hated it when I was at school, and always considered it a sport, that was meant for  the few people that  happened to be  6 foot tall or over. Well , there was so much hype in the media about the Toronto Raptors playing the Golden State Warriors in the NBA finals, that I decided to watch Thursdays big game. I surprised myself, I actually enjoyed it, and found it quite exciting towards the end as Toronto won the close fought game.

Now,  back to proper sports 🙂

As mentioned earlier, the weather in the North East  is still not co-operating with my racing plans.

The weekend forecast looked grim and as Friday arrived (14 June) , I was doing the now familiar thing , of checking the status of the nearby tracks.

The day had been raining in most places, and by 1-00 pm , Autodrome Granby , Quebec, the Can Am Speedway at Lafargeville and my local Mohawk International Raceway NY, had all been cancelled.

Things still looked good at the Brewerton Speedway NY ,  which I got confirmed by my friend Dave Medler, who works there.

So, Brewerton it was,  and by 2-00 pm I was heading in that direction. After driving through plenty of rain, the skies got brighter south of Watertown, and by the time I reached the track, I was basking in sunshine.

Even though it was a last minute decision to go there, I was still there early enough for a nap in the parking lot before the racing got under way. As usual I had a brief wander around the pits before moving on to the middle, to join my CNY ‘tog’ buddies. 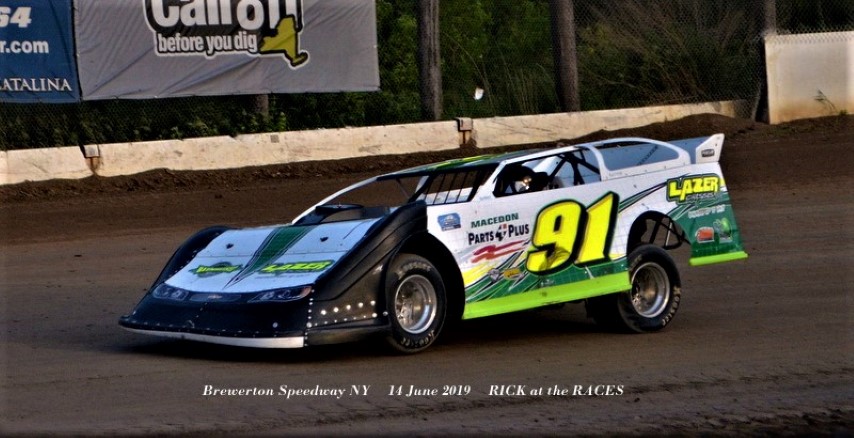 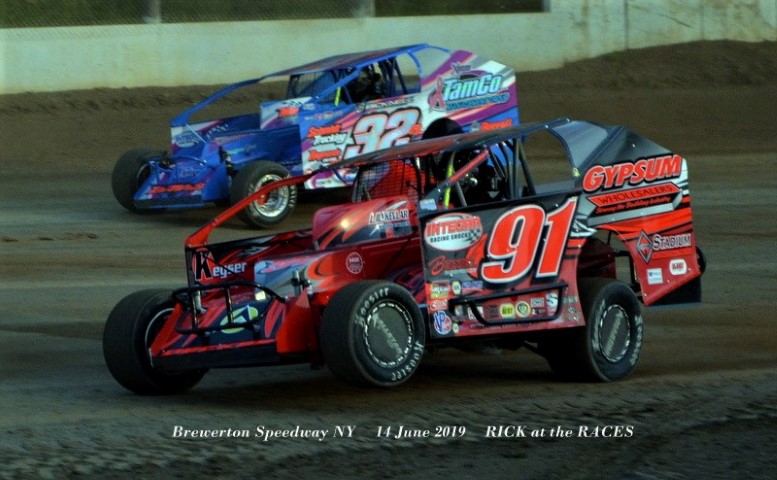 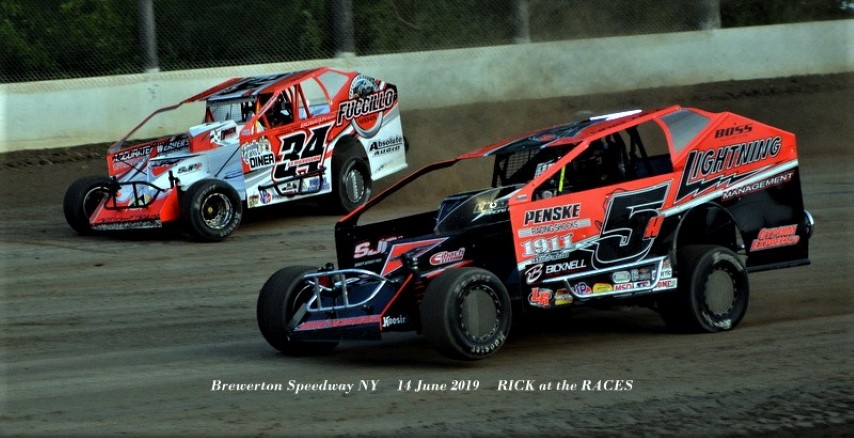 The nights program had the addition of the Late Models which added to the headlining Big Block Modifieds, Sportsman, Mod Lites and 4 Cylinders.

First of the Feature races, was for the Late Models, and this was won by Chad Homan.

Next up, was the one I had come for, the Modified Feature. 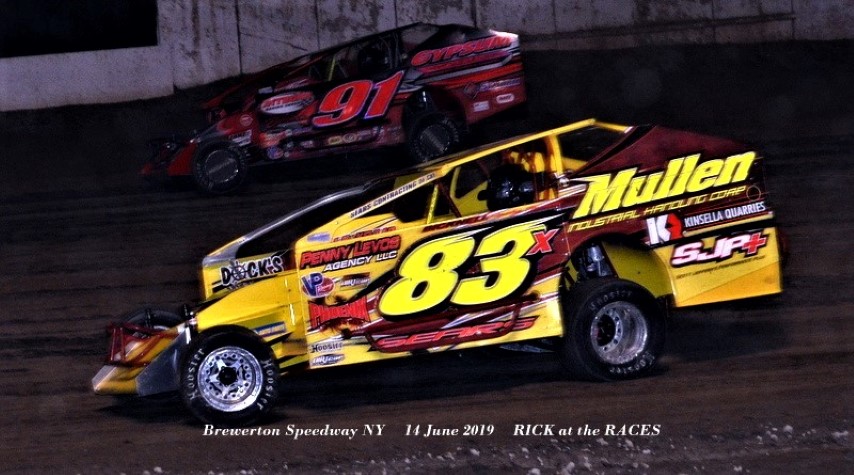 This was a good one, where Tyler Trump made the early running, only to be overhauled by Tim Sears in the closing stages. Sears had worked his way to the front from a mid field start.

Once the Modified Victory Lane pics were done, I made an early exit and headed for home.

Saturday’s weather forecast was just as bad as Friday, with the Airborne Speedway at Plattsburgh appearing to have the best chances of racing.

The Brockville Ontario Speedway, Autodrome Drummond and Fulton Speedway all had to cancel.

Rain was expected after 9-00 pm at Airborne, and with their regular start time of 6-00 pm there was a good chance of them getting the show  in.

I joined my buddy Don Simpson for the trip over there.

We arrived around 4-00 pm, and soon found out, that management had taken in to account the expected rain, and decided to stream line the evening to beat Mother Nature. Start time was moved forward to 5-30 pm, with non stop racing, no intermission and no Victory Lane ceremonies. 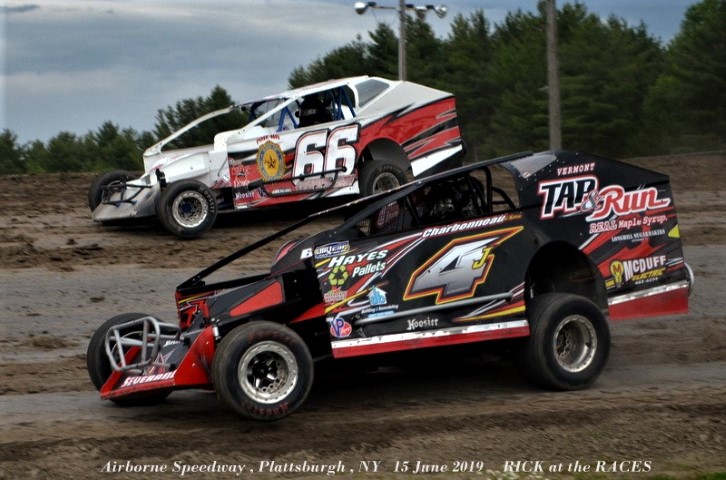 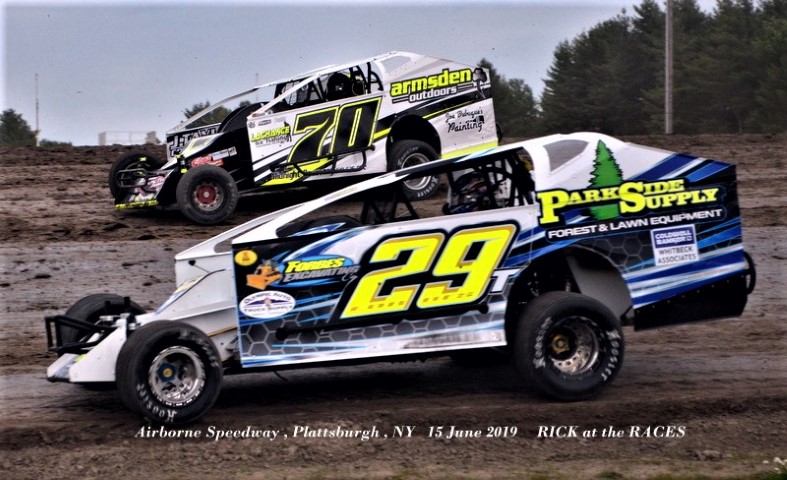 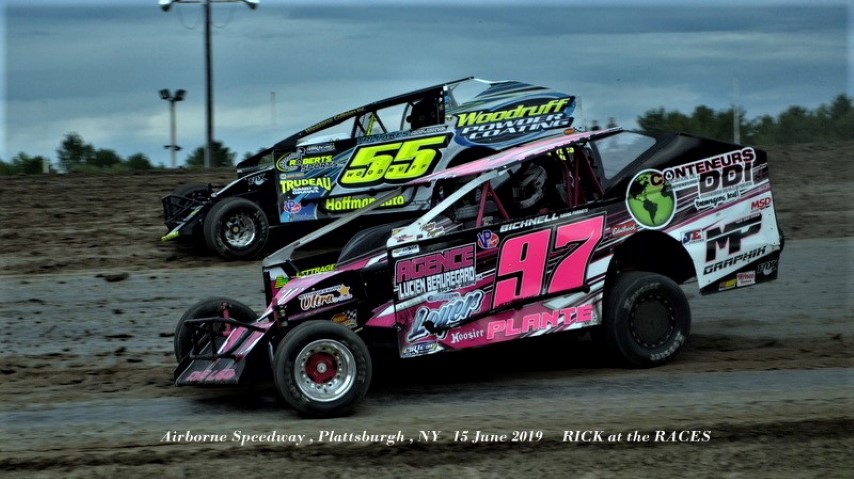 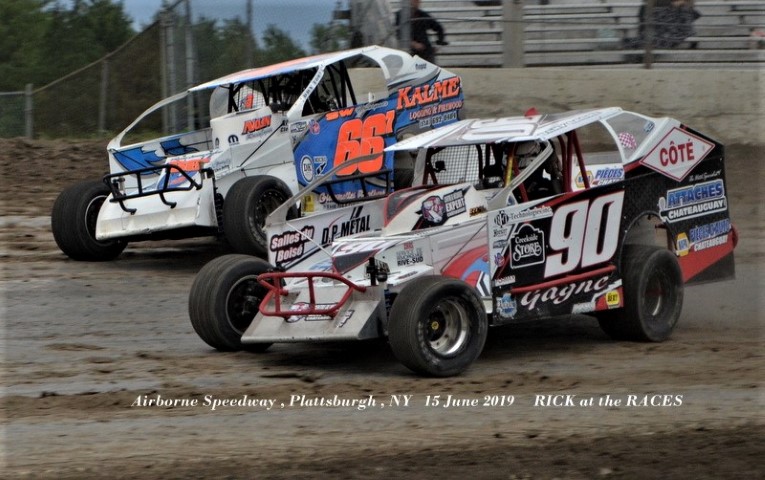 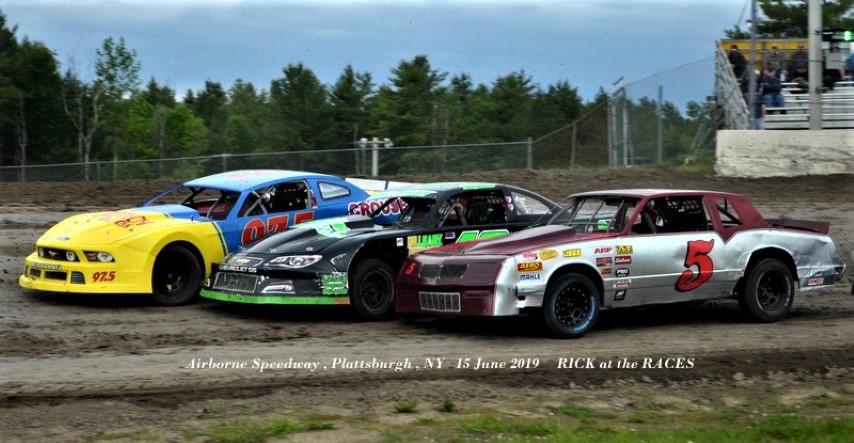 There was a good turn out of cars in all  the divisions, and everyone did their part to get the show in.

There were a few spots of rain during the Novice Sportsman race, ( won by  D J Gonyo) but that only lasted  a short time, and it was  nothing serious. 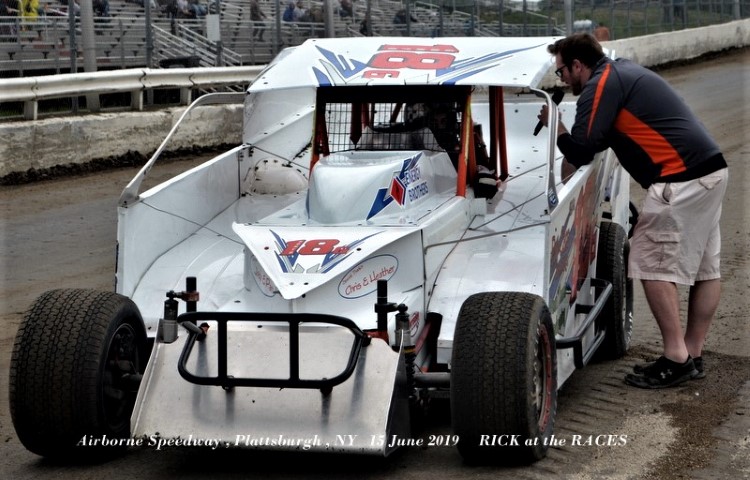 The non stop action worked well, and before 7-00 pm the Modified Feature was in the books. 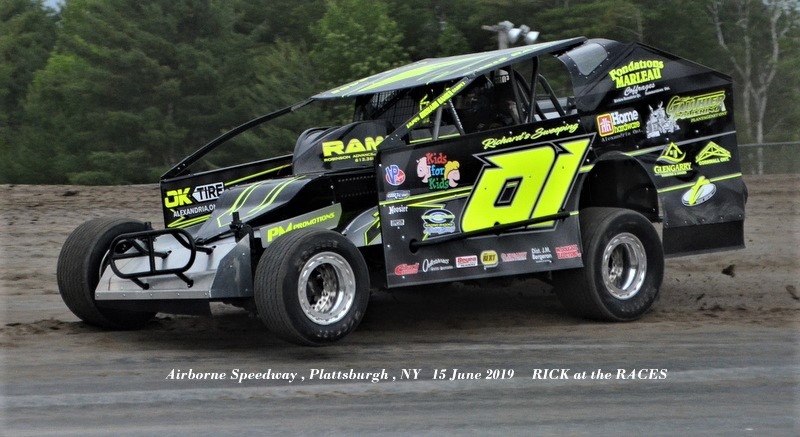 Chris Raabe got the checkers from a strong 19 car field.

The Sportsman race took a little longer , as you’d expect, but this was still over by round 8-00 pm. 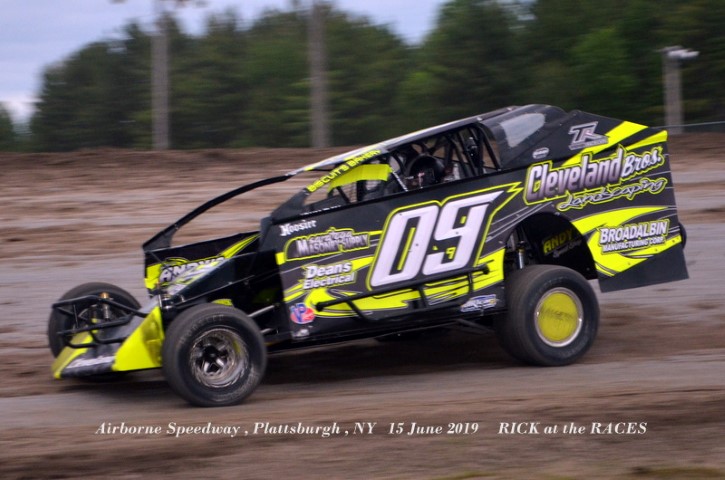 Connor Cleveland took this one.

Both DirtCar divisions had been decided and it was still nice and early.

What a  great Job by ‘Rookie Promoter’ Robby Knowles and his team.

With only the Super Stocks and Strictly Stocks left to run, Don and I , made our exit.

By 8-30 pm were having a Chinese Buffet in downtown  Plattsburgh before heading back to Canada.

On Sunday the forecast was a lot better and my local Cornwall Motor Speedway looked good to go,  for their Fathers Day show.

I was joined for the day by my good friend Chantal Lesage.

Once we arrived at  the track,  she spent  Fathers Day , with her dad Tech Man Ted, beside the tech scales. 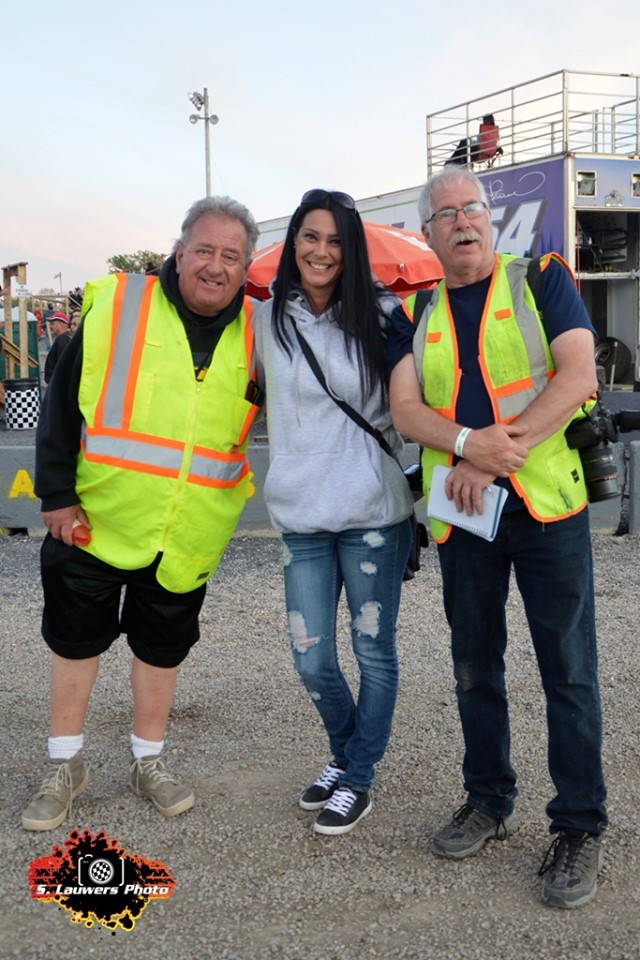 It wasn’t long before we met up with my buddy Don.

Added to the night,  were the Quebec, Lightening Sprints, not my favorite addition to the program, but I know there are quite a few  people that like them. 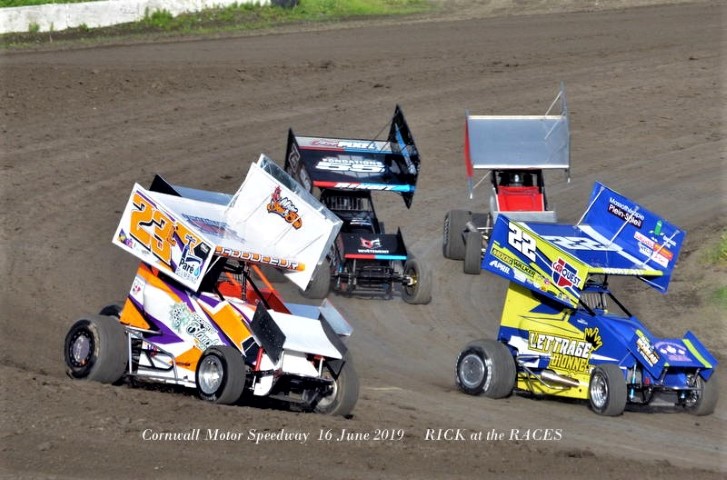 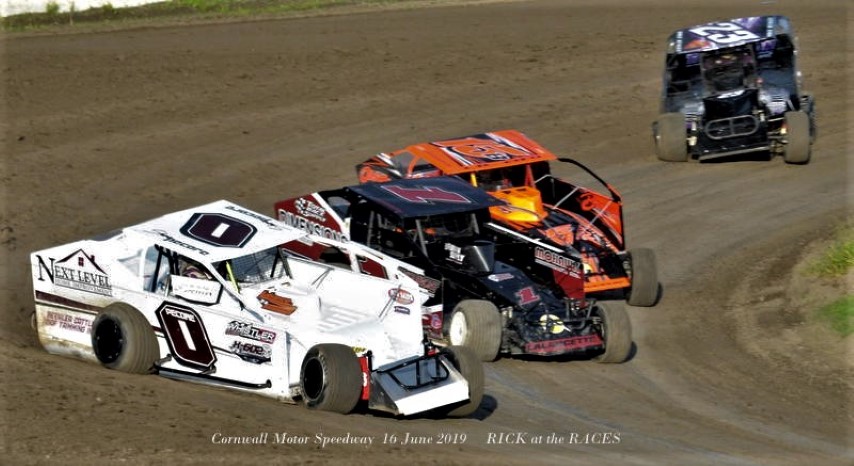 I did my usual pictures of the heat races from the pit tower, before moving after intermission to the middle for the Features . 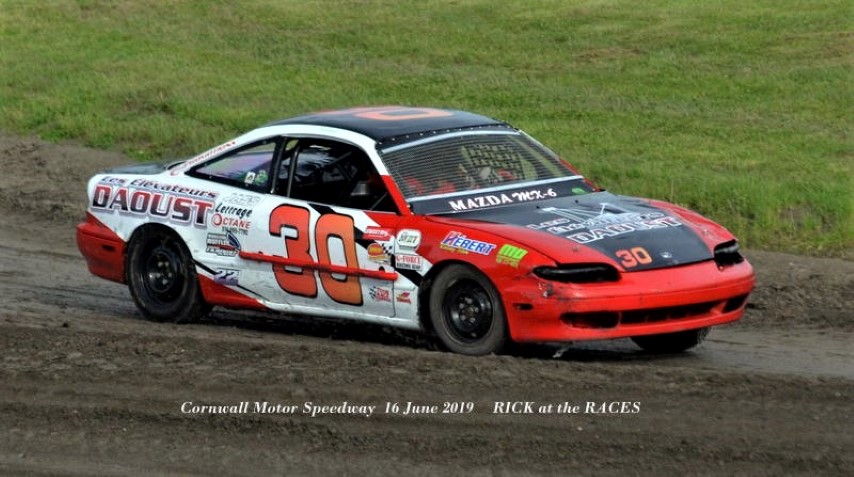 As usual the Mini Stock feature was run before the break, and Marc Dagenais took this one.

The wet weather had taken its toll, and much track prep was needed prior to the main features. 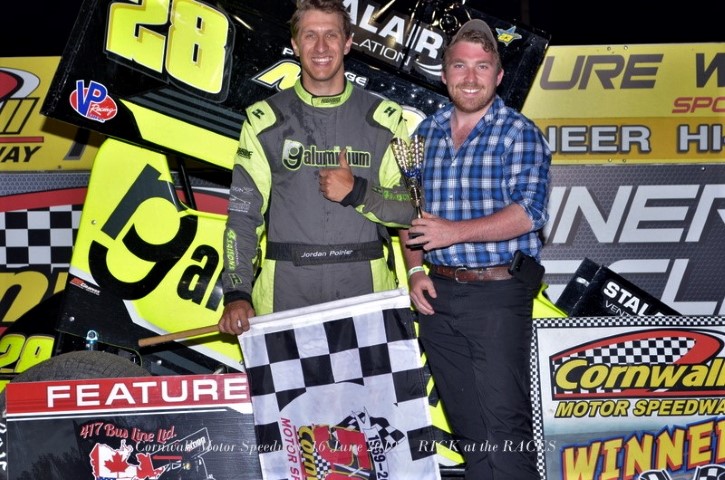 Before the DirtCar  divisions, we had the Lightening Sprints, which were won by Jordon Poirier.

The Pro Stock feature followed this where Marc Lalonde took the checkers,

The Modified division had benefited from the rain outs from the days before, and the ranks were boosted by a few invaders. I think there were about 24 cars which made for a healthy field for the feature. 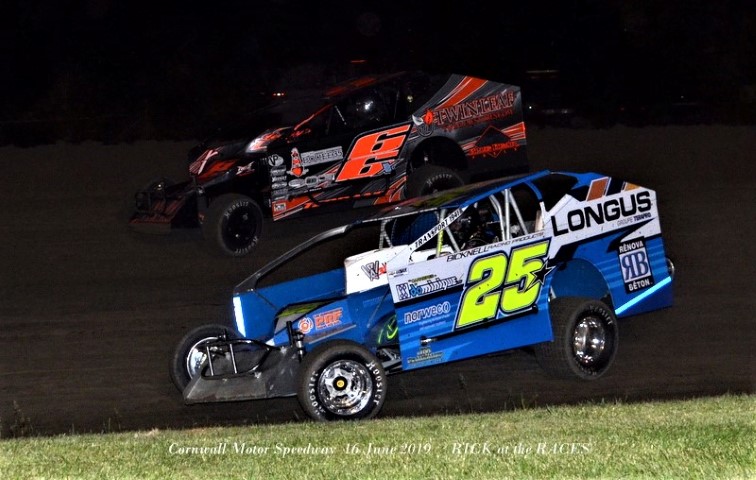 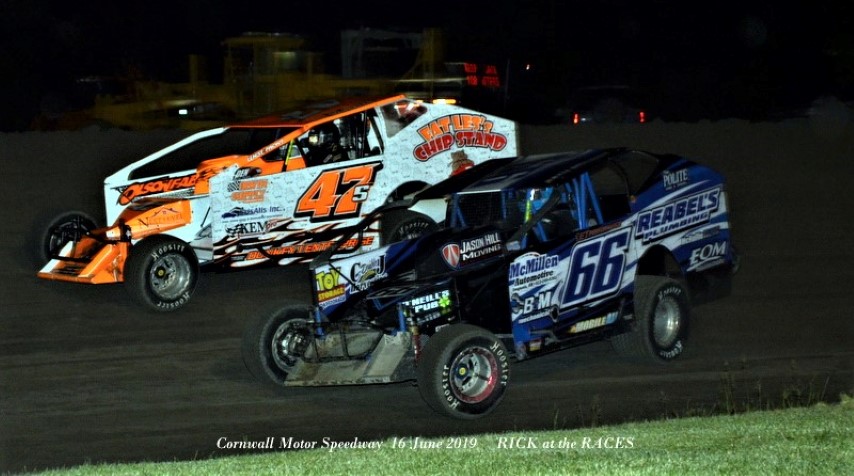 Early leader was Corey Wheeler, but once Kyle Dingwall got passed him , that’s where he stayed.

A nice Fathers Day win for Kyle and his dad Chico Dingwall.

The Final feature of the night was for the Sportsman,  and once again it was Shane Pecore in Victory Lane. 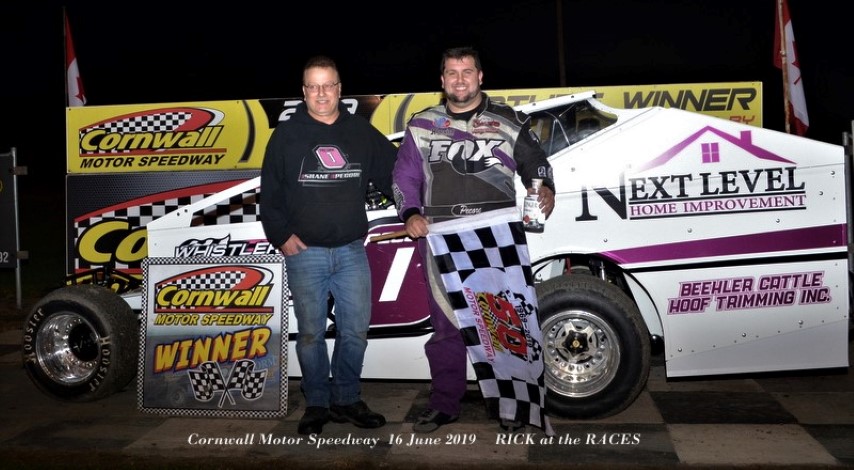 This gave me another chance of taking a Fathers Day picture,  this time, with Marcel and Shane.

That was it for the weekend, Chantal headed back to her place in Gatineau, while I went to mine to down load my pictures.