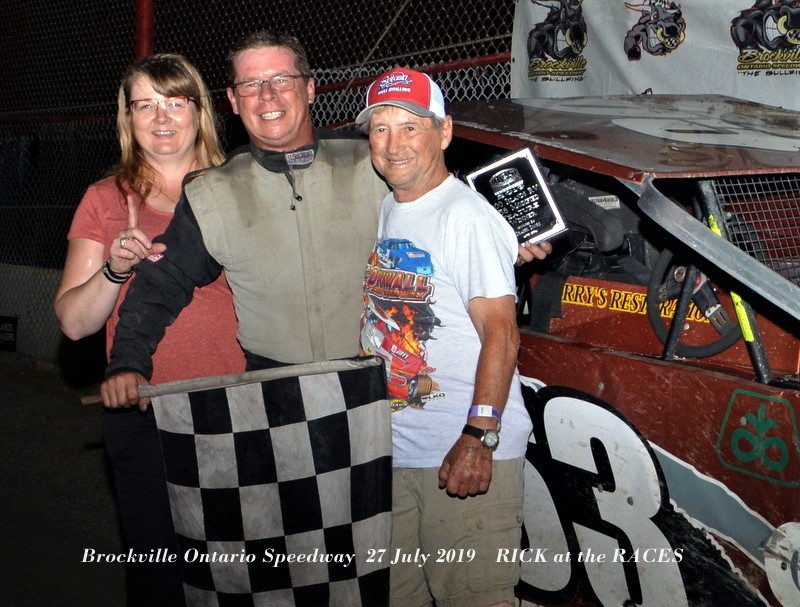 After a few weeks with a busy schedule of races, I only managed to get one in the books for this report .  It wasn’t the intention, but just the way things worked out.

On Thursday 25 July , the rented hot water tank I had in my house decided to quit after many years of service, and then spill its contents over the floor of the basement. So , an early morning phone call was made to the rental company.

Unfortunately , all the calls go through a ‘call center’ and when trying  to contact them, you never seem to get the same operator twice.

I was informed  they could not get out to me that day, but said someone would be out between 10 am and 2-00 pm on Friday. That did not happen, and after numerous calls to various operators , a service tech turned up at 6-00 pm on Friday evening  . By then, I was furious. I had been sitting at home all day unable to go out.

A new tank was fitted by 8-00 pm, but that was too late for my usual trip to the Mohawk International Raceway. In my absence, Madison Mulder won the Modified Feature and Shane Pecore, the Sportsman.

While I was at home sitting around waiting all day , I had a nice surprise arrive in the post from the Netherlands.

It was a lovely T shirt from my good friend Elsje  Jaspers Boschma that she got for me at the Venray Speedway . 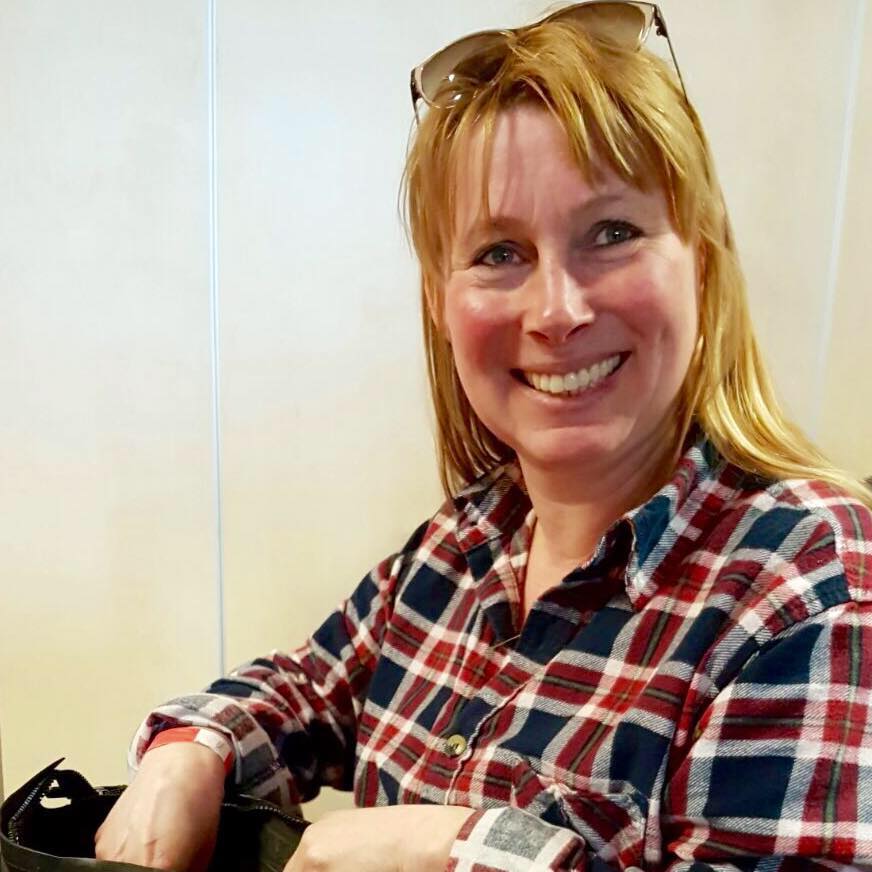 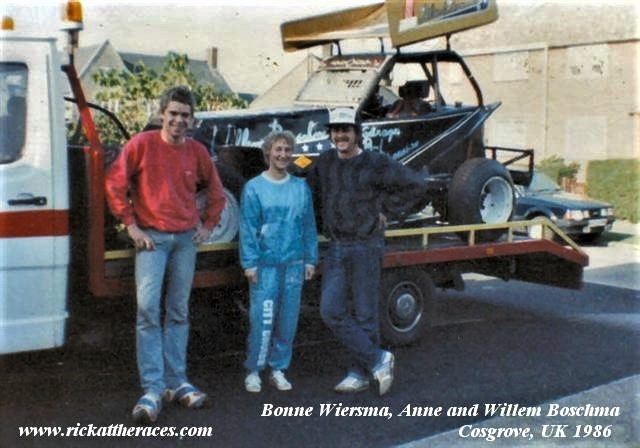 Back in 1986, when I was living in the UK , I got to know a Dutch F1 Stock Car driver named Willem Boschma and his family.

They would often stay at my place when they visited England for the races. Willem and Anne have three daughters who grew up as friends with my daughter Carla.

Carla and I remain good friends with all the Boschma family to this day .

Elsje who is the oldest daughter is now grown grown up and has a family of her own. This weekend , she and her husband Kornelis and their children were attending the races at Brafield, in England and sent me some pics. 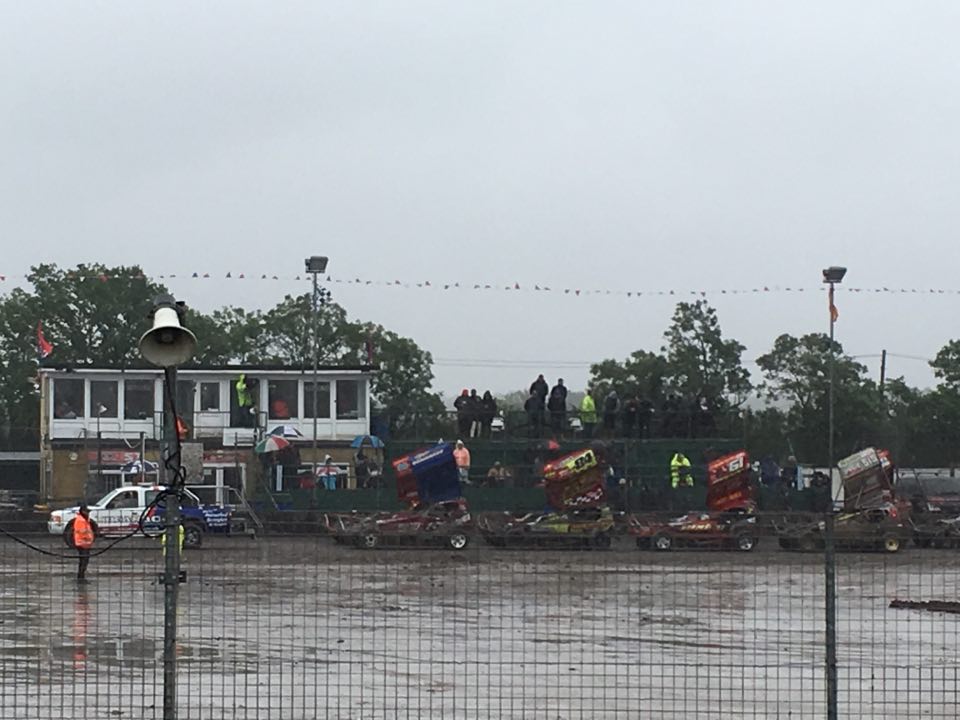 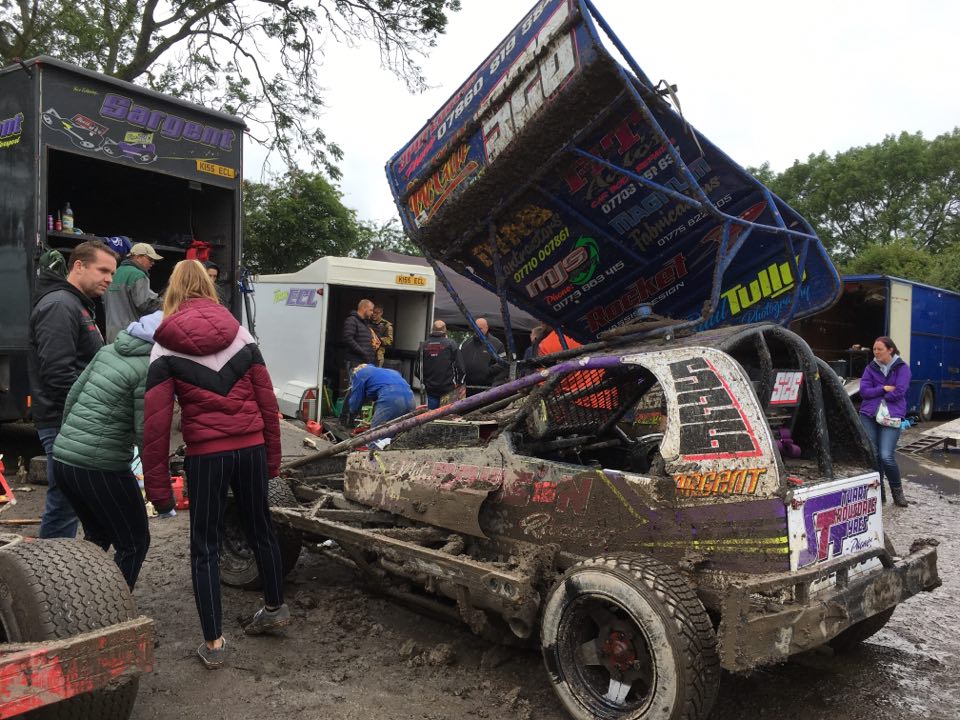 Apparently it was raining all the time.

On Saturday morning, I was having issues with the newly fitted tank in my basement, and  following more talks to a bunch of different people at the call center, I got another very vague tech appointment for 8-00 am to 1-00 pm on Sunday. I was not optimistic .

Anyway it was still only Saturday , so I took a trip down Hwy  401 to the Brockville Ontario Speedway. It was another scorching hot day for a regular program of racing.

I’m glad it was a regular show as I was hoping for an early night after the last couple of days of stress. 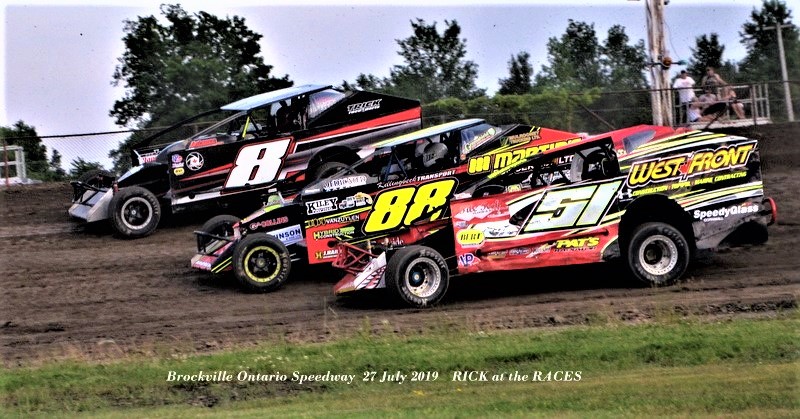 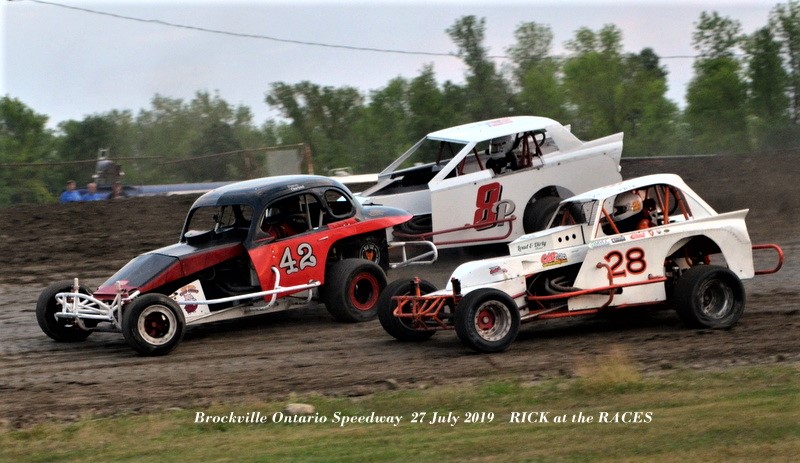 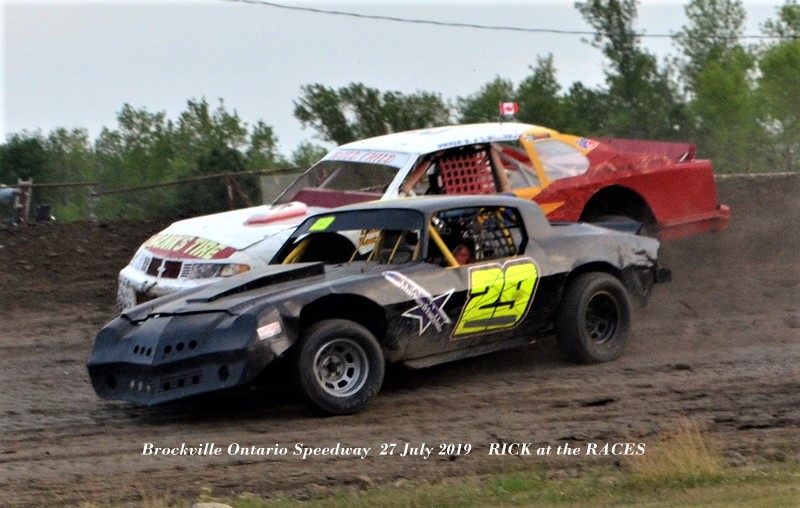 My wishes came true and to make things better, the premier divisions had their feature races first. 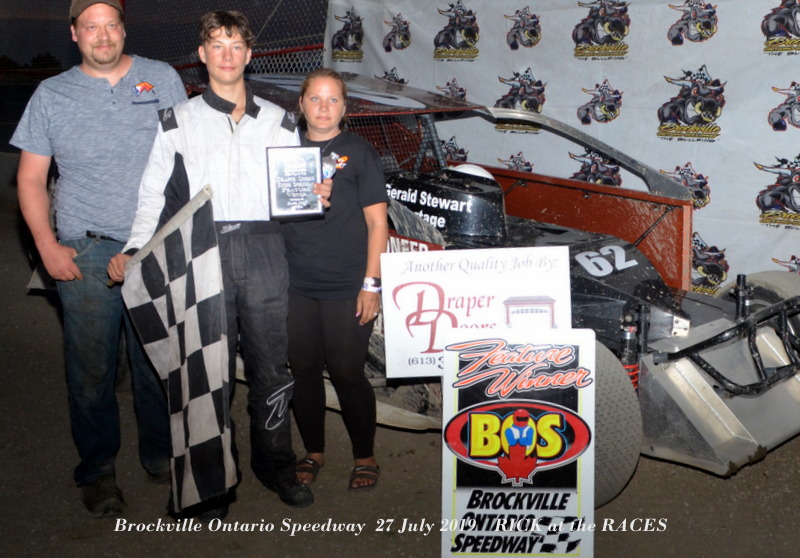 First up was the Rookie Sportsman which gave young Tyler Stewart the win. 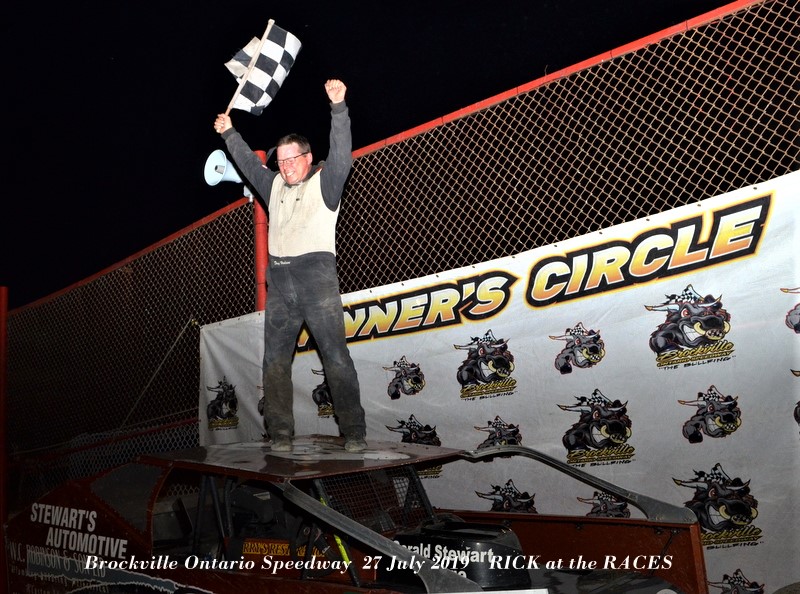 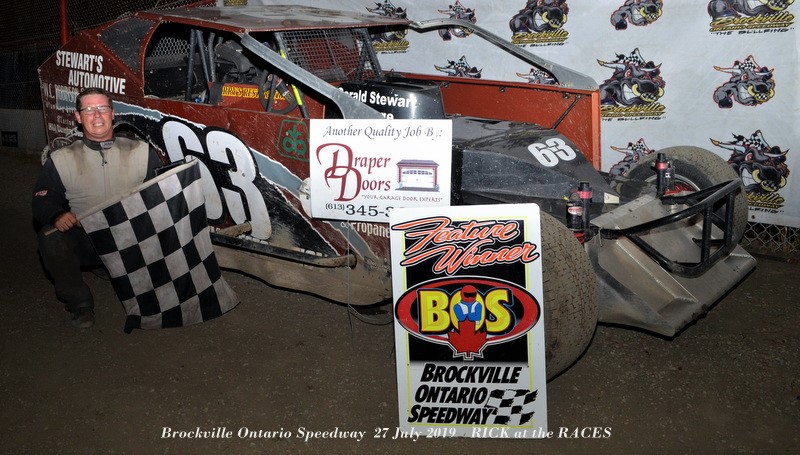 Another win came to Stewart Racing, in the Modified feature where their ‘hired gun’ Chris Herbison took the checkers.

It was still only 9-30 pm and I’d seen what I came for, so took the opportunity to make my exit.

The early get away, meant I was back home in my house in Cornwall before 11-00 pm, just what I needed.

I had the plumber appointment from 8-00 am on Sunday morning , so was up by 7-30 waiting in anticipation.

I was able to watch the live TV coverage of the German Grand Prix from Hockenheim.

Just like the stock car races at Brafield  in the UK, that my friends were attending, it rained for most of the day.

The rain was a major contributor in making this another interesting F1 Grand Prix.  There were many spin outs and both Ferrari and Mercedes each had a car that  failed to finish.

At the end of  the race it was the young Dutchman Max Verstappen in the Red Bull who was celebrating in Victory Lane.  The race was over by 11-15 am and there was still no sign of my plumber.

Then at about 12 -15 a message came my way , saying that he was running late and he would be there in about two hours.

My friend Chanty then arrived at my place ready to join me for the races at the Cornwall Motor Speedway that night, so we both waited patiently for the plumber to appear .

It was then time to cross the town and head to the Speedway. It was warm and humid when we arrived but a dark cloud was on the horizon.

I listened to the drivers meeting then went over and chatted with Guillaume Daoust the car owner of Mario Clair. 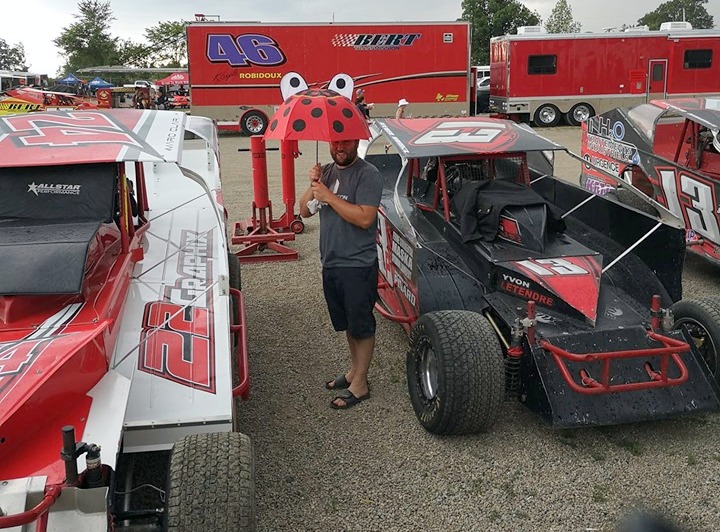 While standing by their race hauler the first few spots of rain came down, then within minutes I was sheltering from a huge rain storm.

It wasn’t long before the obvious cancellation announcement was made, and we were all heading back home.