I’m still very much in a recovery mode, so for the time being, my racing schedule continues with events that I consider to be local.

There was plenty of action going on over the weekend , with the Super DirtCar Series taking place at the Albany-Saratoga Speedway NY and the annual APPLE FEST going on at the Brighton Speedway in Ontario.

I chose two  Quebec tracks, that were a lot nearer to home.

Autodrome Drummond had a ‘big money’ SuperStars Sportsman race plus 358 Modifieds on Saturday night and the ‘Last Show’ at the paved Autodrome St Eustache was taking place on Sunday afternoon.

It was announced last year that at the end of the 2019 racing season, the track would be closing as the land  became the property of Hydo Quebec.

It’s always sad when we lose a track, whether its Dirt or Paved. Even though my preference is for Dirt racing, over the years, I’ve been to the tidy facility on a number of occasions .

So, with this being the  ” Dernière course à l’autodrome St-Eustache ”  (Last Show) , I wanted to be there.

While I’m still convalescing from my recent stay in hospital , my good friend Chanty once again accompanied me as  ‘minder’.

We got to Drummondville, Quebec in good time for a short wander round the pits before the racing got under way. 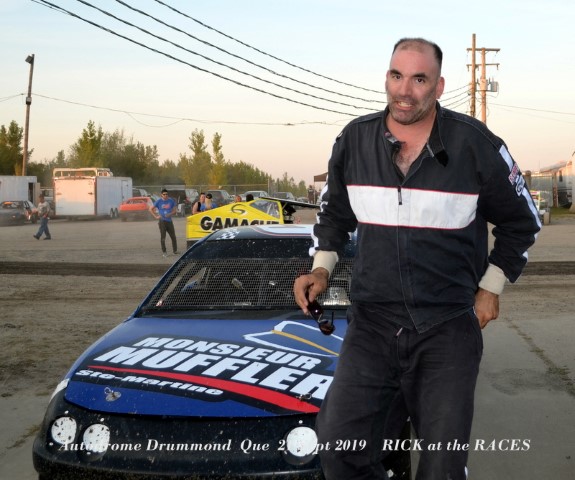 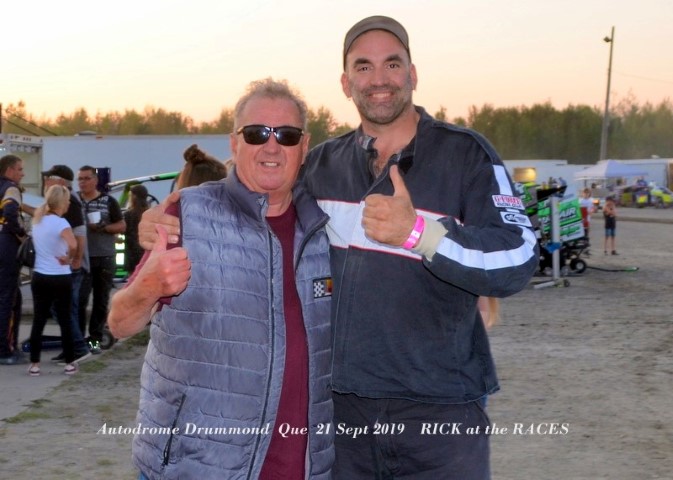 One of our local Ministock drivers, Marc Dagenais  was up there racing ,  so I used his trailer to sit and relax during some of the heat races.

Parked right beside Marc’s trailer was my good friend Josee Fortier with her Mod Lite. 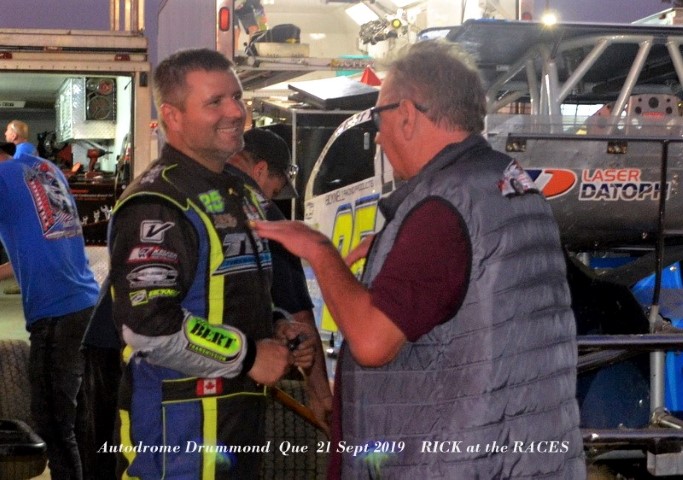 Chanty and I wandered the pits, and bumped into a few other good friends, including those on the Steve Bernier team.

When the Feature races began , I took a seat in the main grand stand to watch the action.

Before the main events , for the Sportsman and Modifieds , it was the turn of the support divisions.

Up first was the STR (Speedsters) which was won by Sabrina Blanchette. 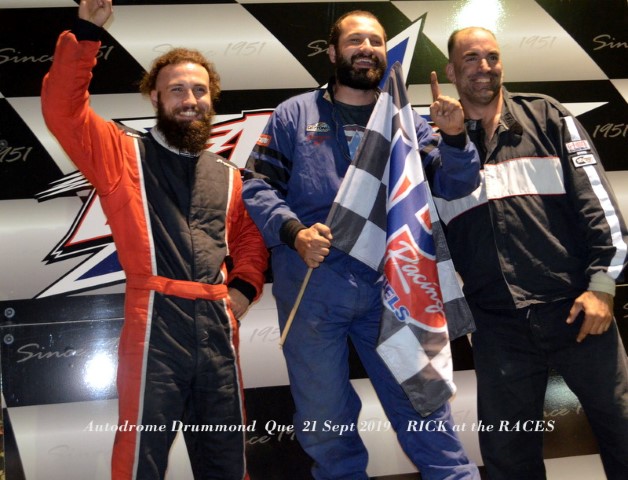 This was followed by the Ministox , where our friend Marc Dagenais, made a late pass, to grab a third place.

The $7 ,500 to win Sportsman SuperStar race was next and attracted many of the top drivers from the Modified division. Some had adapted their Modifieds to Sportsman Spec, and others were in loaned cars.

The eventual winner , in a race that was marred by a number of bad wrecks, was won by David Hebert in the loaned # 99 car of Gaetan Brisebois.

By now things were running late and it was after mid night when the Modified feature began.

This also had its fair share of cautions, and it was Francois Bernier, brother of Steve, who took the checkers. 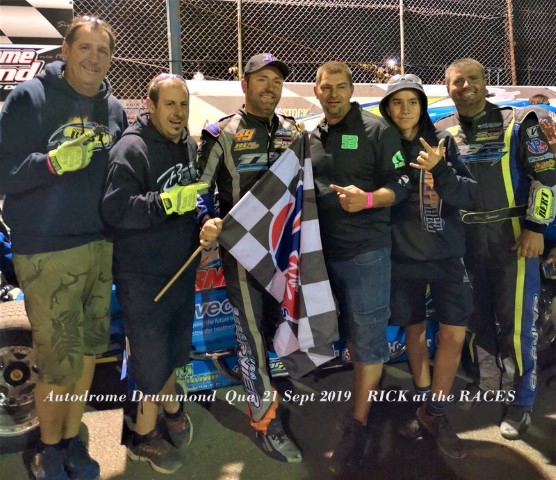 On Sunday morning Chanty and I set off in the direction Montreal and  Autodrome St Eustache which is located about 30 minutes north of the city.

The show was an afternoon event and it started just after mid day.

On arrival it was obvious the place was going to be packed out, as the line up of cars trying to get in, was backed up to Hwy 148. 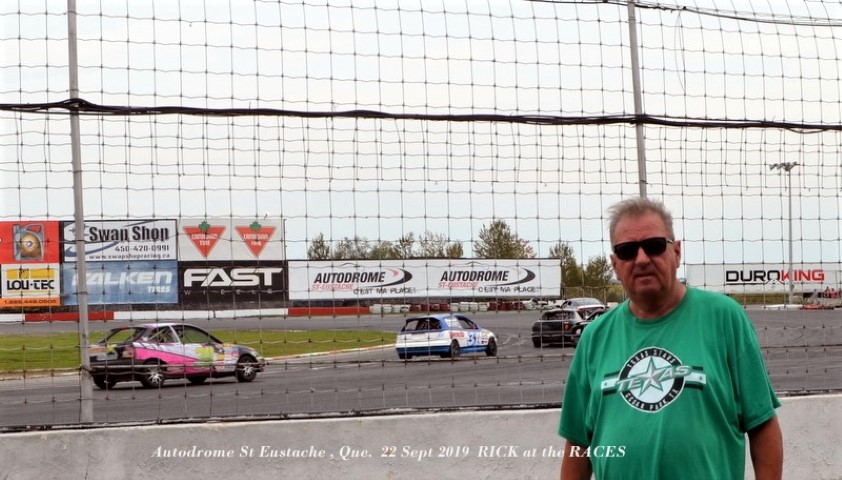 Lucky for me, my media pass allowed me to park the car in the pits.

The first person we bumped into was my long time buddy Dean Reynolds, the Super DirtCar Series director.

He’d  driven up from Albany NY where he had been officiating at the Albany-Saratoga race the previous night. ( Demetrios Drellos won that one) .

Dean, just like me is a member of the TRACKCHASERS group and was there to add St Eustache to his totals (142 Tracks) before it closed. 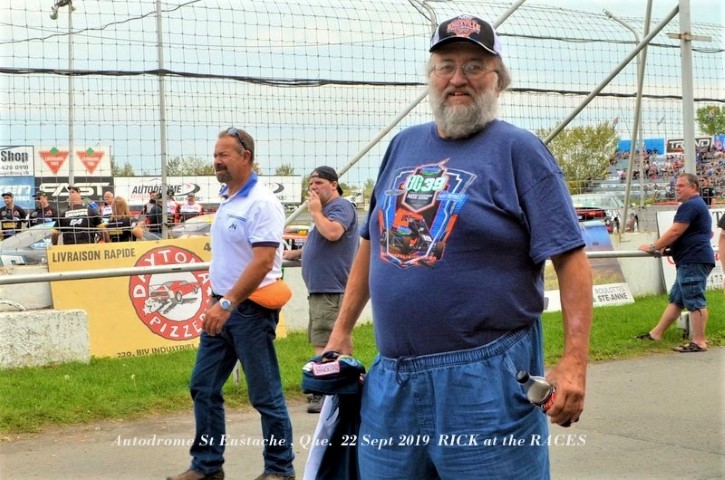 Gordy Killian,  from Philadelphia PA , another  of my TRACKCHASER  friends was also there for the same reason. 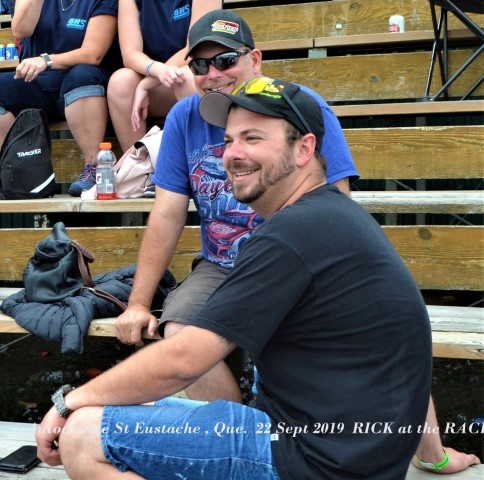 There were other familiar Dirt Racing faces  watching  too, car owner Guillame Doust,  Modified driver, Josianne Plante and her father, as well C.D Beauchamp from the Pro Stocks. 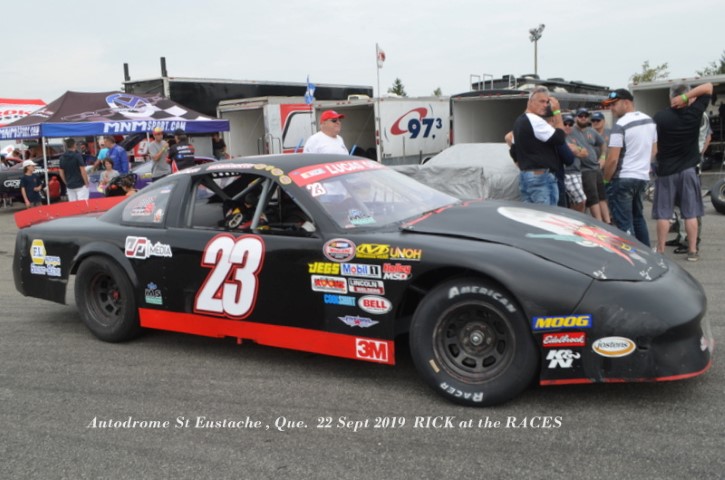 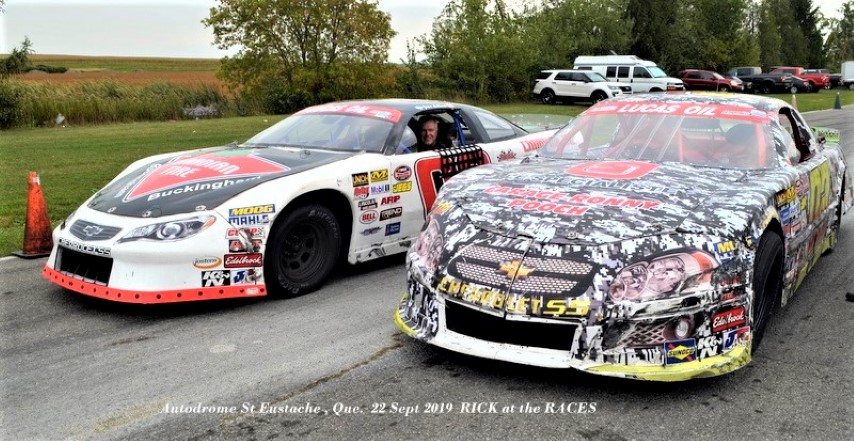 We had a wander round the pits and then settled down to watch the NASCAR Sportsman cars in action ( a bit like the Dirt Pro Stocks). They were pretty good and we enjoyed their close racing. 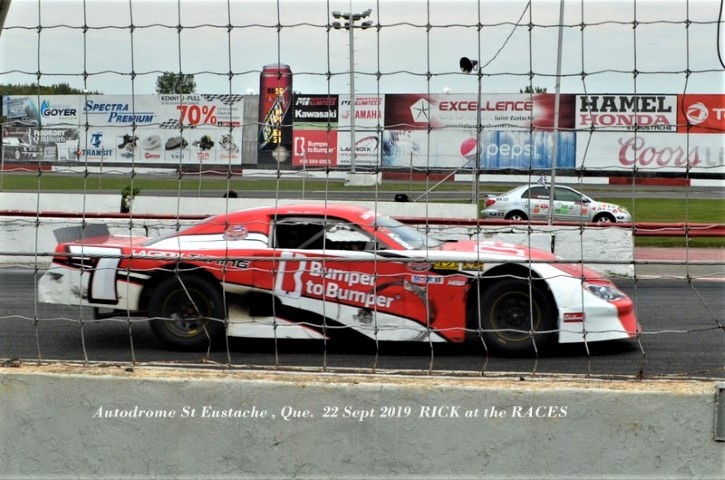 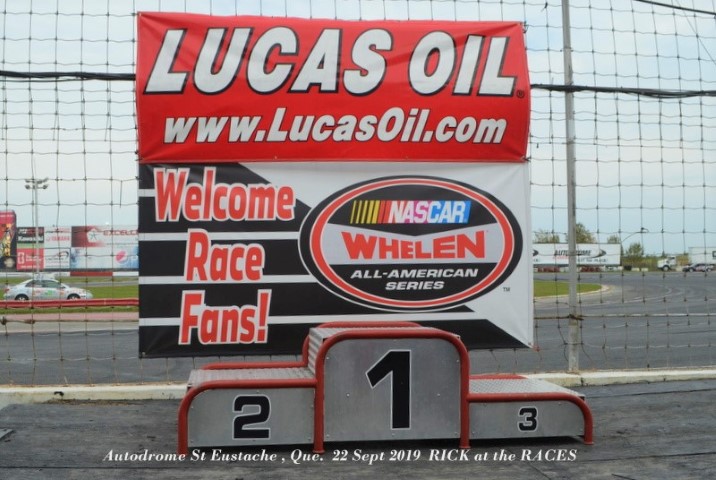 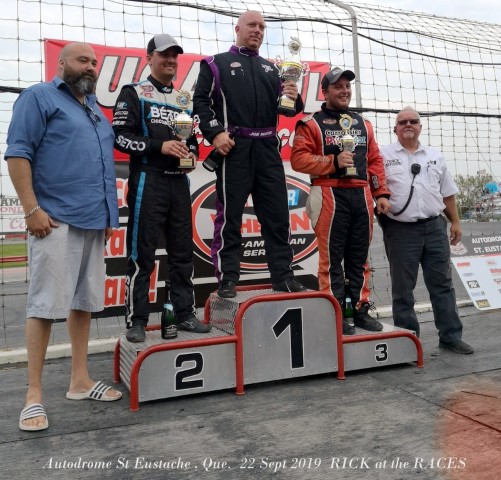 We stayed at the track for a couple of hours before making our exit, as I wished to avoid the mad dash to get out at the end.

So, I can now say I attended the last Last Show at St Eustache.

It was nice to get home at sensible time, where I was able to catch up with the other news that mattered to me.

Chris Raabe won the APPLEEST Modified race at the Brighton Speedway , and Sebastian Vettel  won the Singapore F1 Grand Prix in his Ferrari.