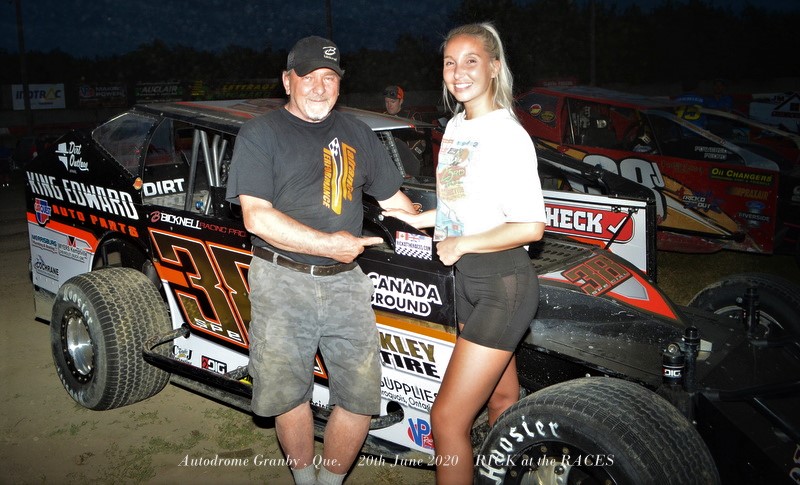 This past weekend on Saturday the 20th June, it was the turn of Autodrome Granby in Quebec, to become the latest Canadian Speedway to return to racing as we slowly pull out from the COVID 19 Lockdown.

I started the week by making a Tuesday night visit to my local Cornwall Kart track where the Dirt Demons, Lawn Tractors and Karts were having their first practice session of the year. 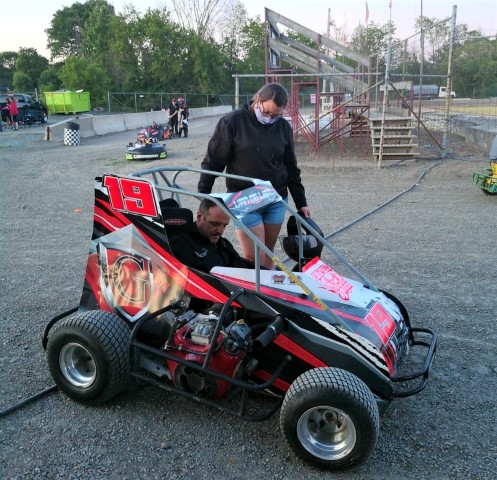 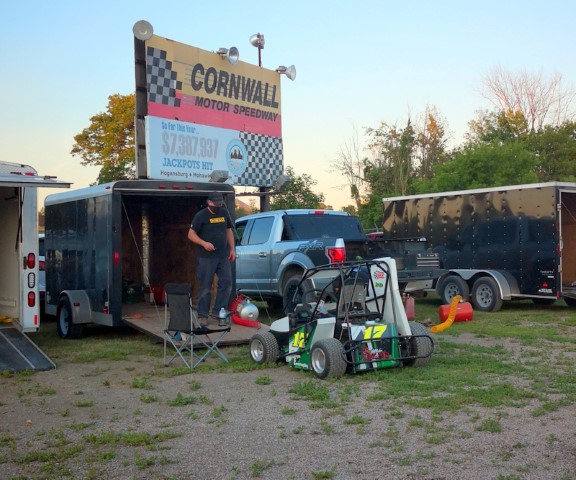 I wasn’t there too long, but long enough to take a few pictures in the pits and chat to the Ladouceur ‘cousins’ . 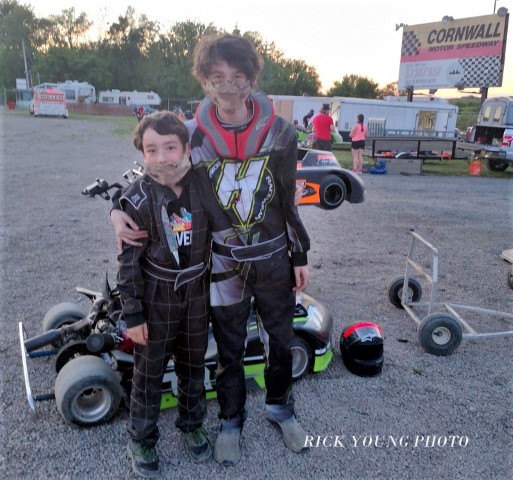 They are the sons of my good friends, Dirt Modified drivers , Lee and Joey Ladouceur . Liam is Lee’s son and Tristan is Joey’s.

Thursday and Friday , I was back at the Cornwall Hospital, for my monthly I.V.I.G  transfusions, and with that all behind me, I was ready for the weekend.

The show at Granby was named the COVID DESTROYER and instead of their normal Friday night , it took place on Saturday .

Like recent races at the Cornwall Motor Speedway and the Humberstone Speedway in Ontario, the first race in Quebec, had no fans in the grandstand.  There were a few spaces available in a “drive in’ section on the outside of turn one, while others had the choice of watching on a big screen in the parking lot, or live streaming from home.

A 50 lap race for the 358 Dirt Modifieds was the headline event , with support coming from the SPORTSMAN, Pro Stocks and Sport Compacts (four cylinder) .

As usual, while the main races were taking place, the small oval in the middle was in action for the Sling Shots.

Once again, I was joined for this Granby trip by my Tog Buddy, Don Simpson. 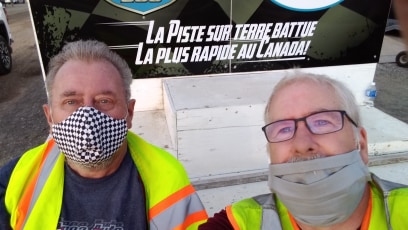 We had a nice easy drive there from Cornwall in my Impala with very little traffic on the road.

For those that dont know, Granby’s pits are in the middle of the track , and the entrance is on the opposite side of the main entrance and grandstand . We were there by about 3-30 pm and joined the long line of race haulers waiting for the gates to open.

Once they were open,  everybody had to enter this way, across the track and on to the middle.

With all the stuff parked in the middle plus  various catch fences and Jersey barriers it makes Granby one of the most difficult tracks to take pictures at . (I think most photographers will agree).

So, with this in mind, I took advantage of the empty grandstands and stood up high with my Long lens, to catch the cars coming out of turn four and going into turn one. 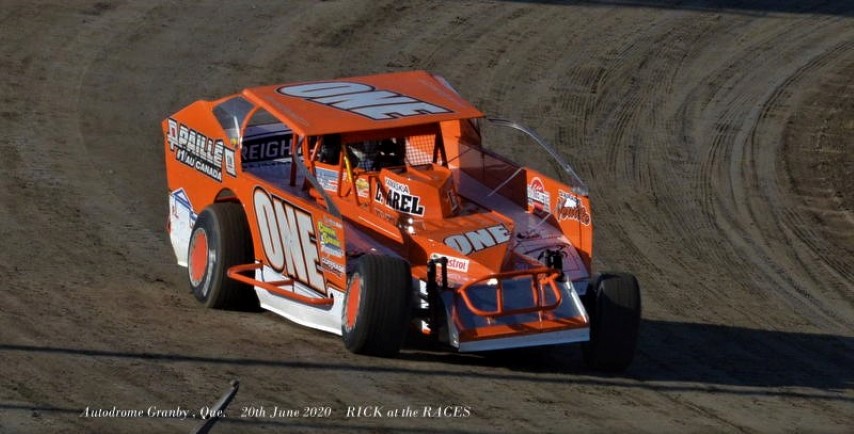 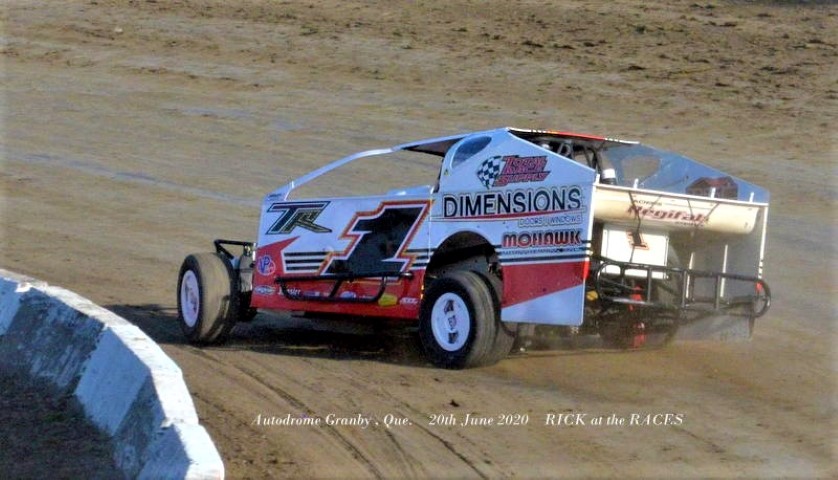 Once the heats were over, and the light began to fade , I crossed back via the pedestrian tunnel to the middle.

I  made a B-Line to the Luke Whitteker # 38 Special Modified to see my good friend and car owner, Ralph Murphy. 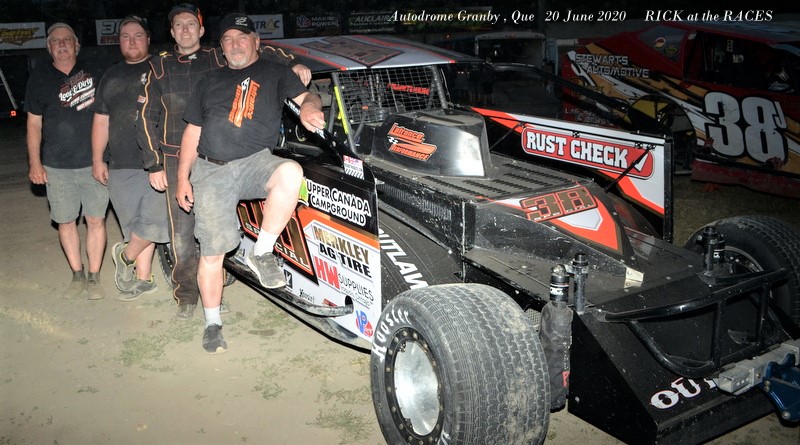 Ralph had sent me a message to me during the week, saying the car had two bare spots on the wrap, and he would like some of my ‘RICK at the RACES’ stickers.

Way back in time, when his daughter Tabatha was racing in the SPORTSMAN division, , they were one of the first teams to have my web site logo on their car, and they were the ones that suggested I got stickers made. 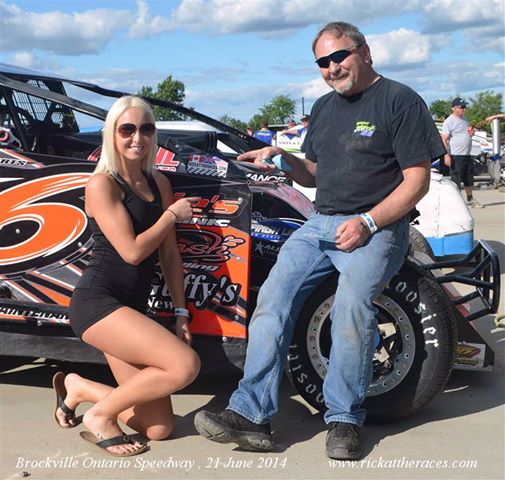 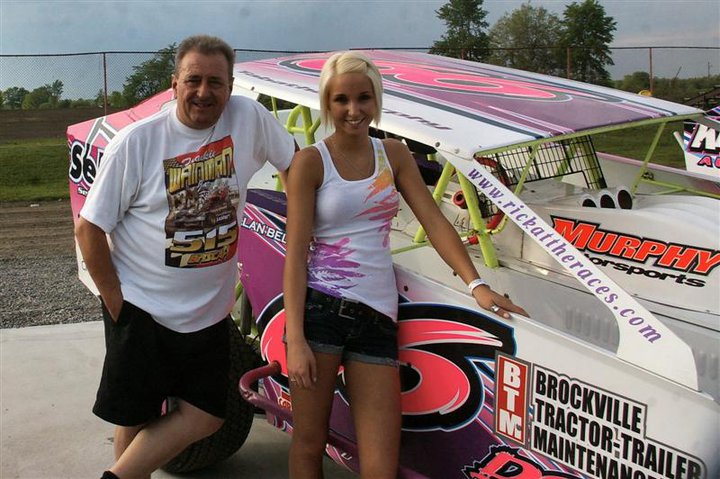 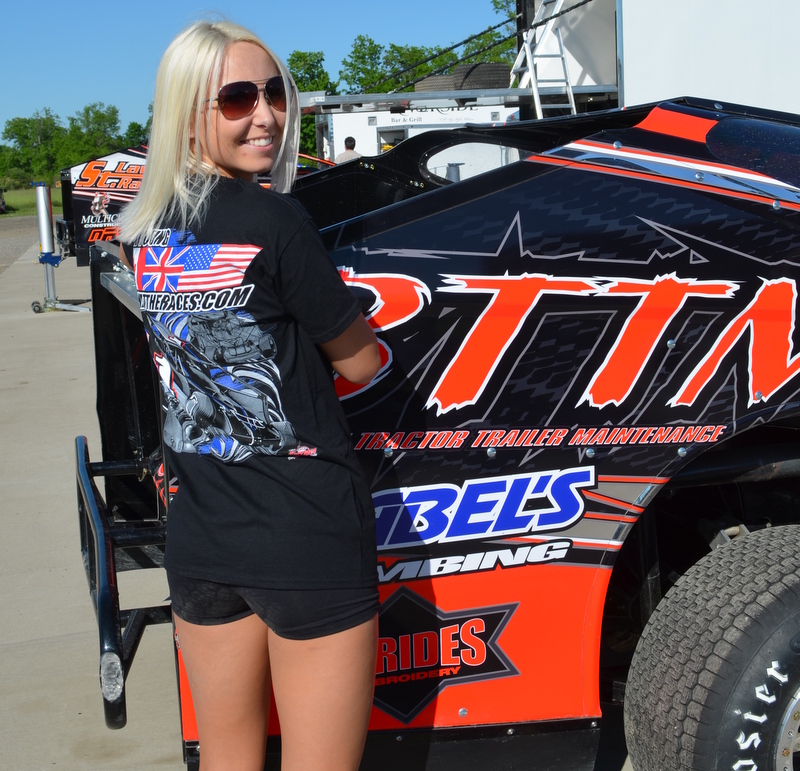 Also in the message from Ralph , he teased me by saying , he would have a surprise for me at Granby.

Once I got to the hauler , I saw my surprise. 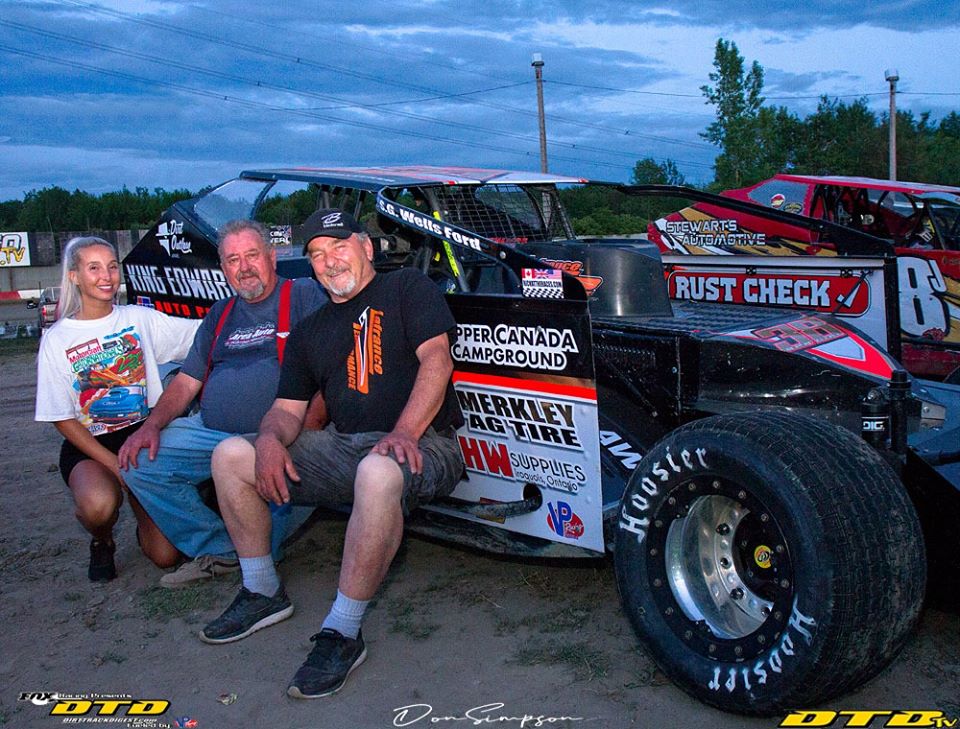 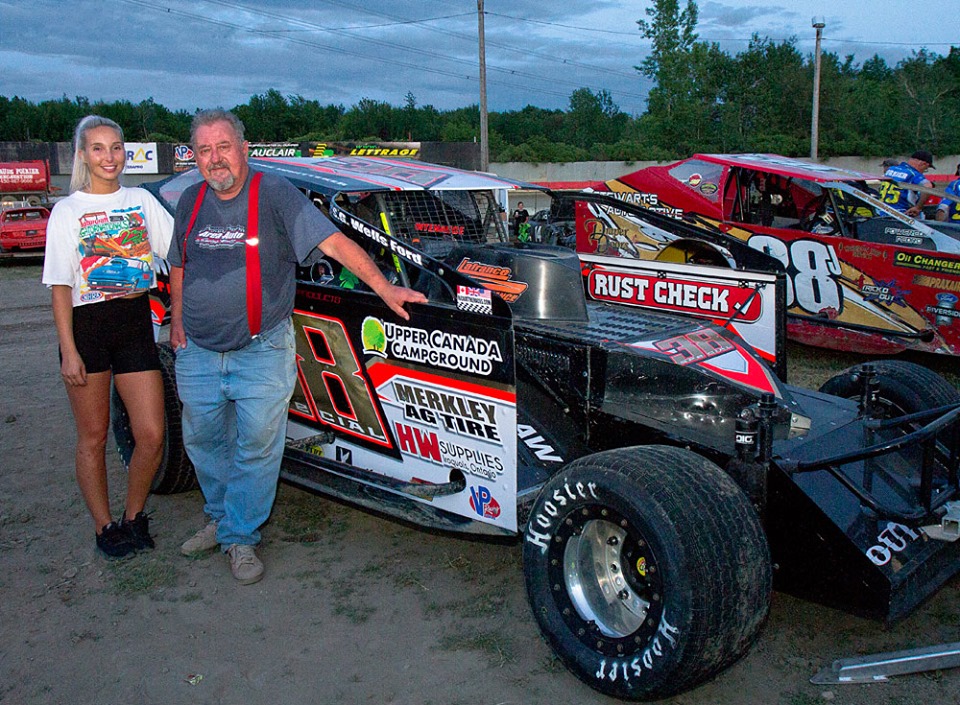 It was Tabatha, making a rare visit to the races. She now lives in Toronto, and is no longer involved in  Dirt Racing .

It sure was a nice surprise. 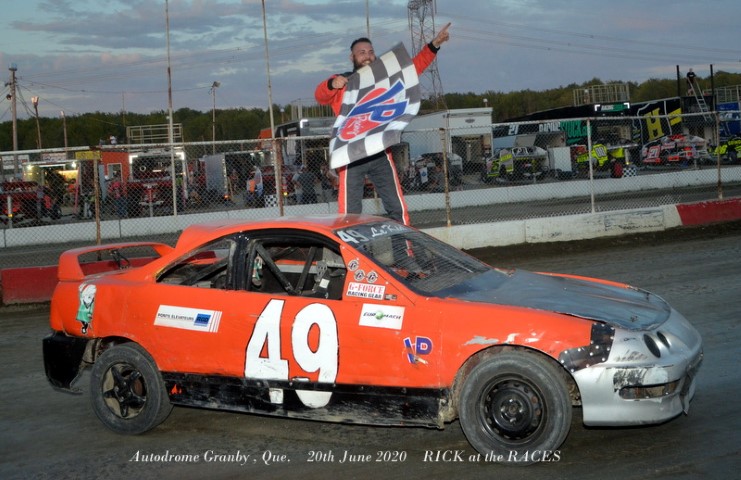 Back to the racing, and the Sport Compact Feature was up first followed by the Modified Feature . 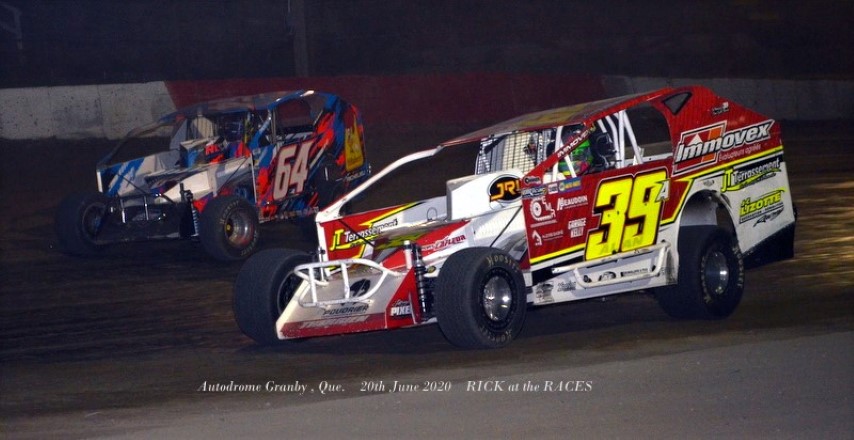 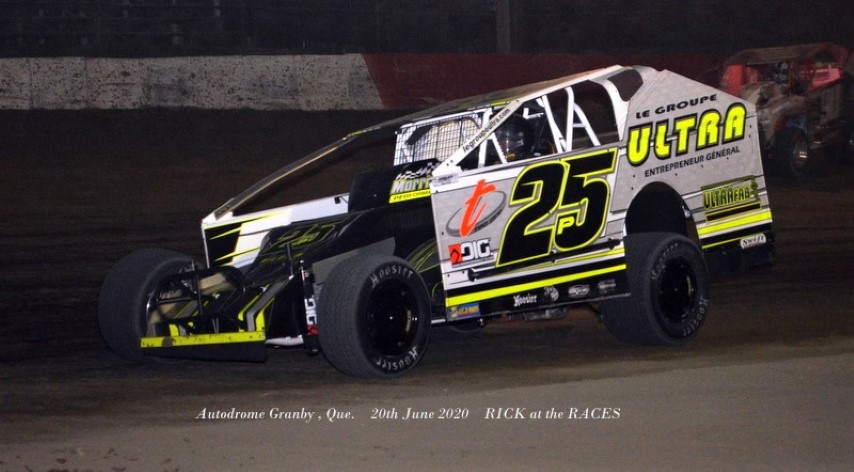 I based myself beside the small gap in the Jersey barrier at the end of the front stretch for the Mods .

It was a  50 lapper and sure was a great one, dominated by the Bernier Bros, Francois and Steve. 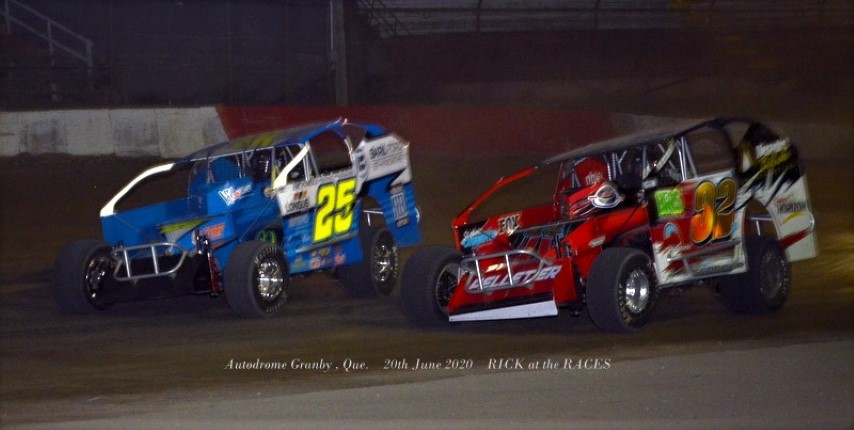 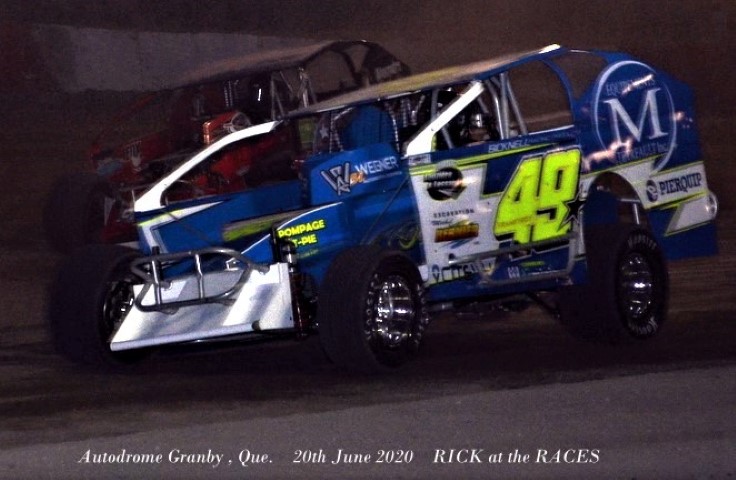 David Hebert was up there too until he dropped back, with some kind of problem, as Steve Bernard , Mario Clair and Martin Pellettier moved into contention.

When the checkers fell it was the Bernier Bros at the front,  Francois first and Steve in second, with Bernard and Clair following them home. 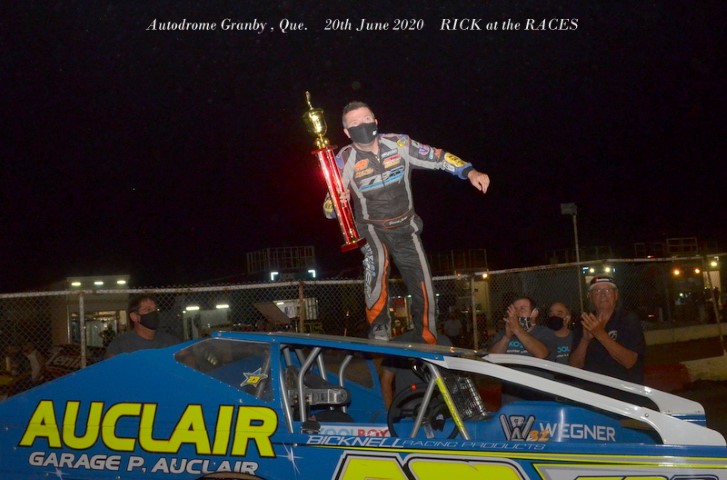 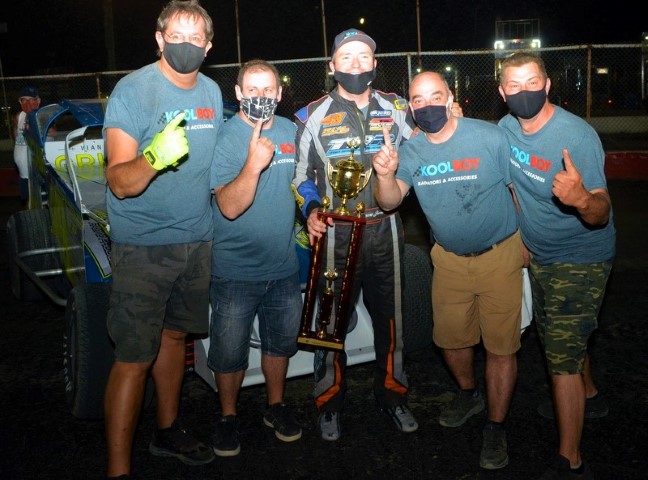 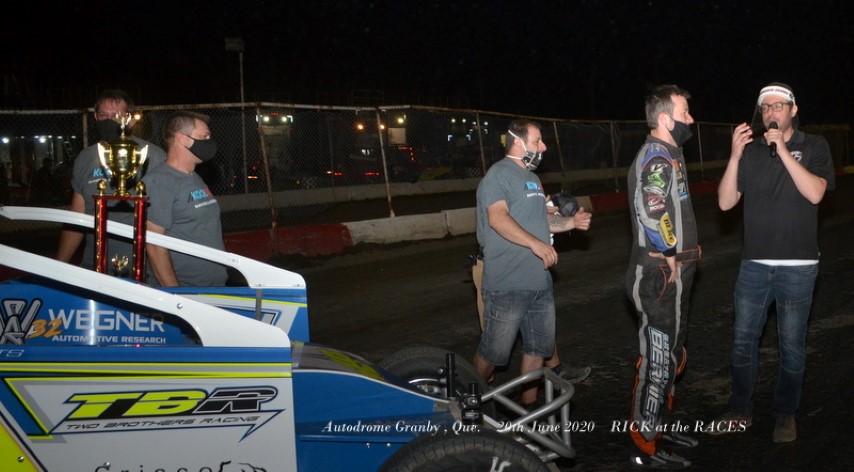 With an expected slow exodus from the middle, after the races, Don and I ,  were ready to leave, as soon as the pit gate was open when the Sportsman and Pro Stock features were done .

I’d driven up to the track,  so Don did the driving back, and by 1-00 am we were back in Cornwall.

Coming up next weekend , it’s Cornwall Motor Speedway with another show, adhering to the Covid  rules.