Another week passes as we slowly pull out of the COVID 19 Lockdown. Racing is returning to the tracks, albeit with empty grandstands, as fans watch from home via online video transmissions.

This week my local Cornwall Motor Speedway held their second show behind closed doors entitled the REVIVAL 50. It was scheduled for Saturday the 27th June.

On Friday night I took a drive across town to join my buddy Ron Morin,  former owner, and now ‘track prep’ man getting it ready for the coming day. 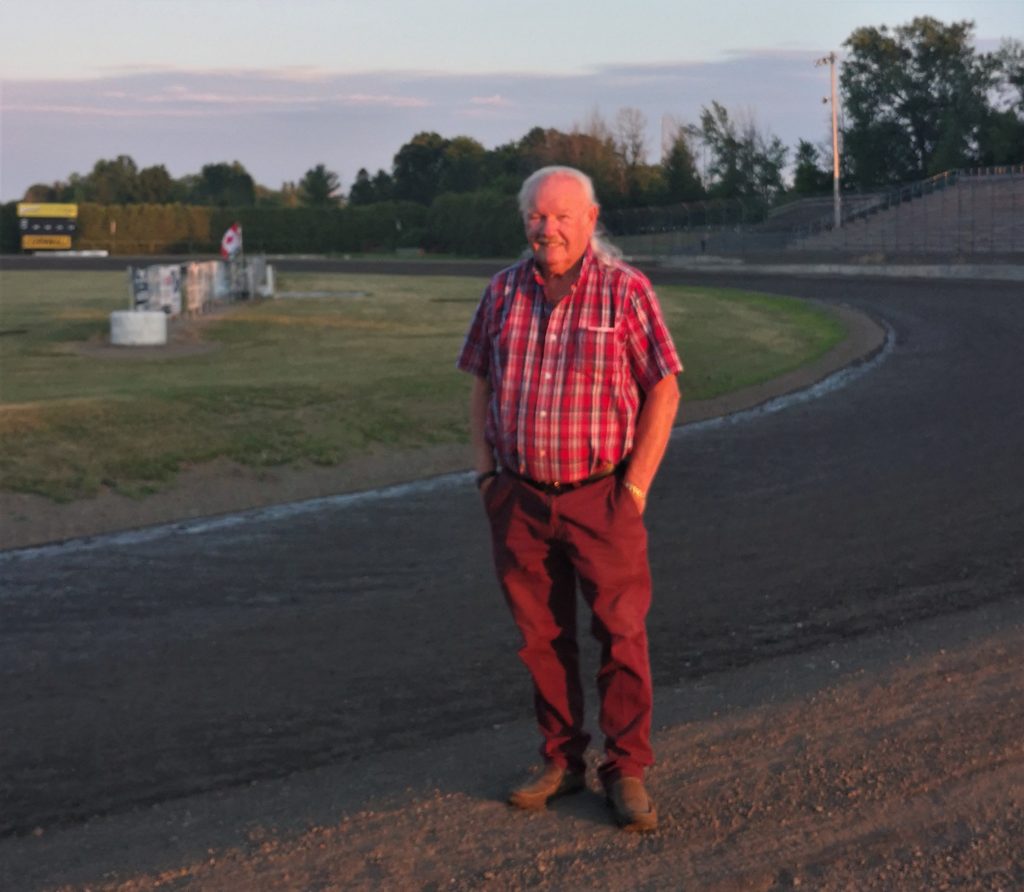 I did a few laps riding shot gun , with him in the water cart.

Although some showers were expected for Saturday, the ground was very dry following the heat wave we’ve had, and lack of rain. 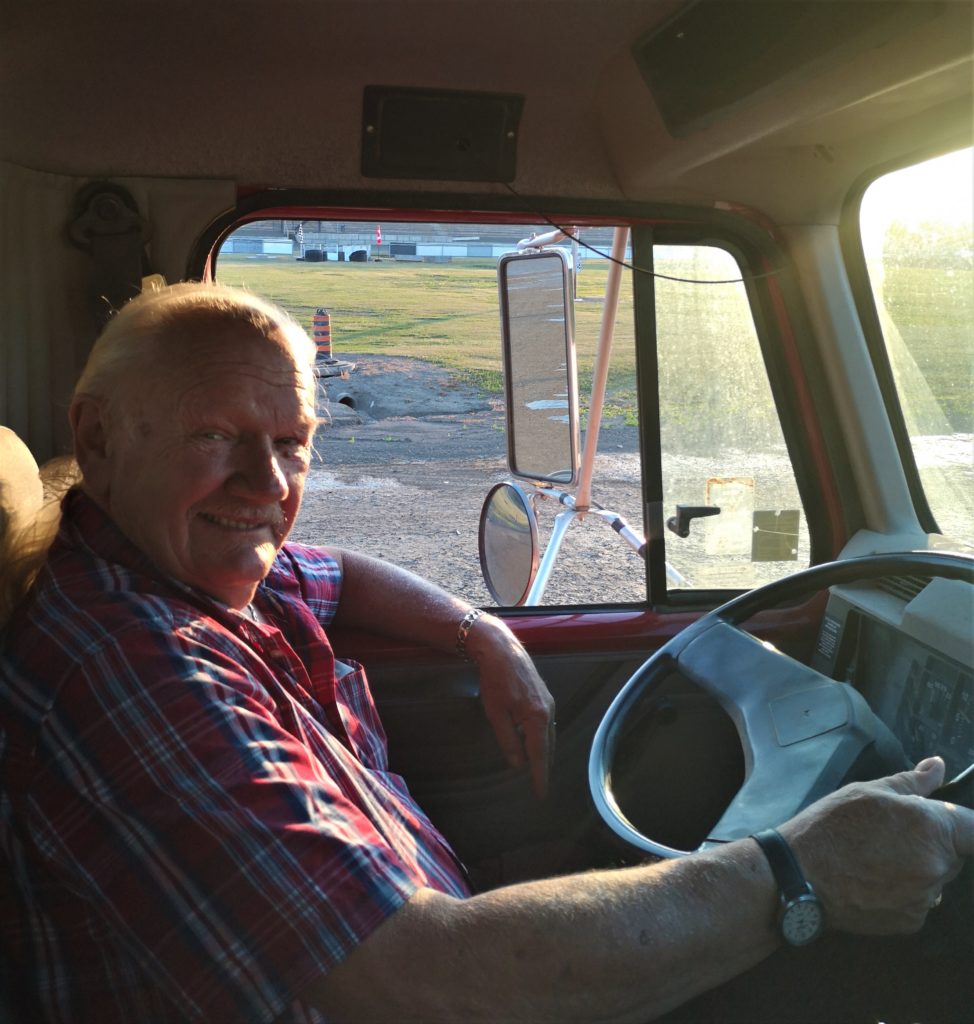 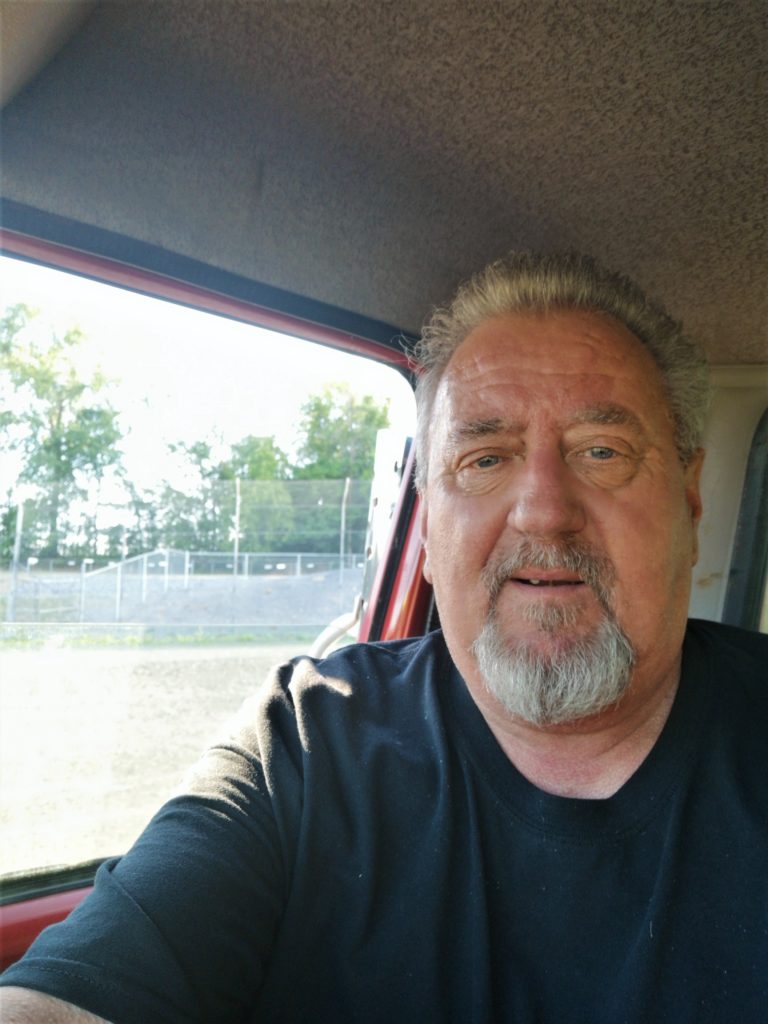 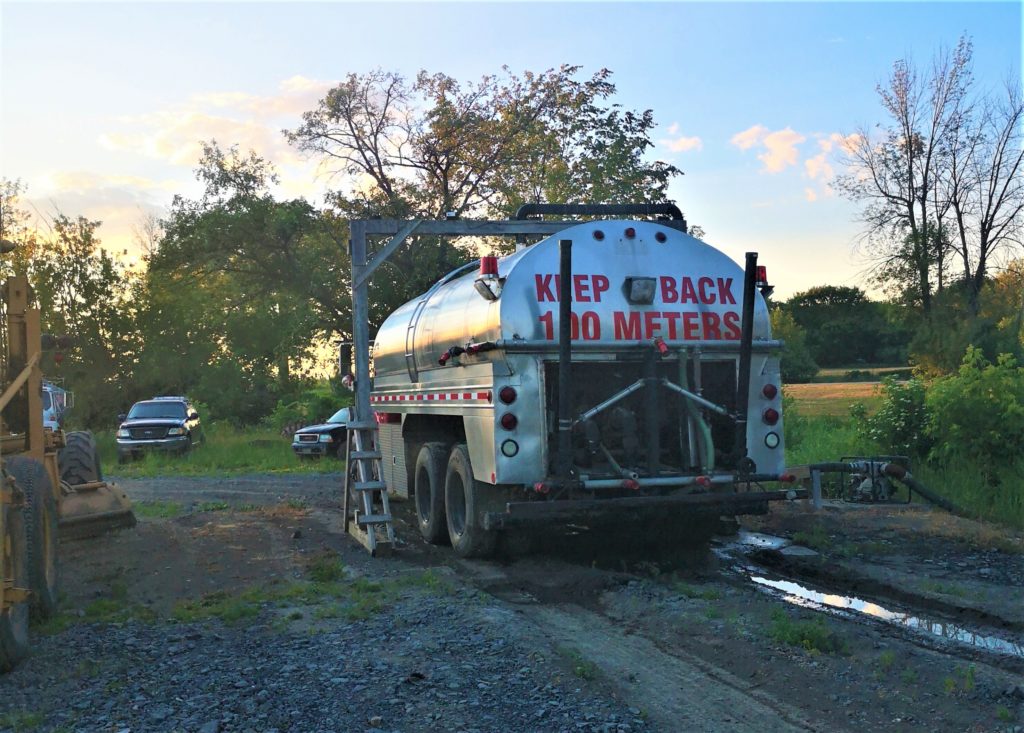 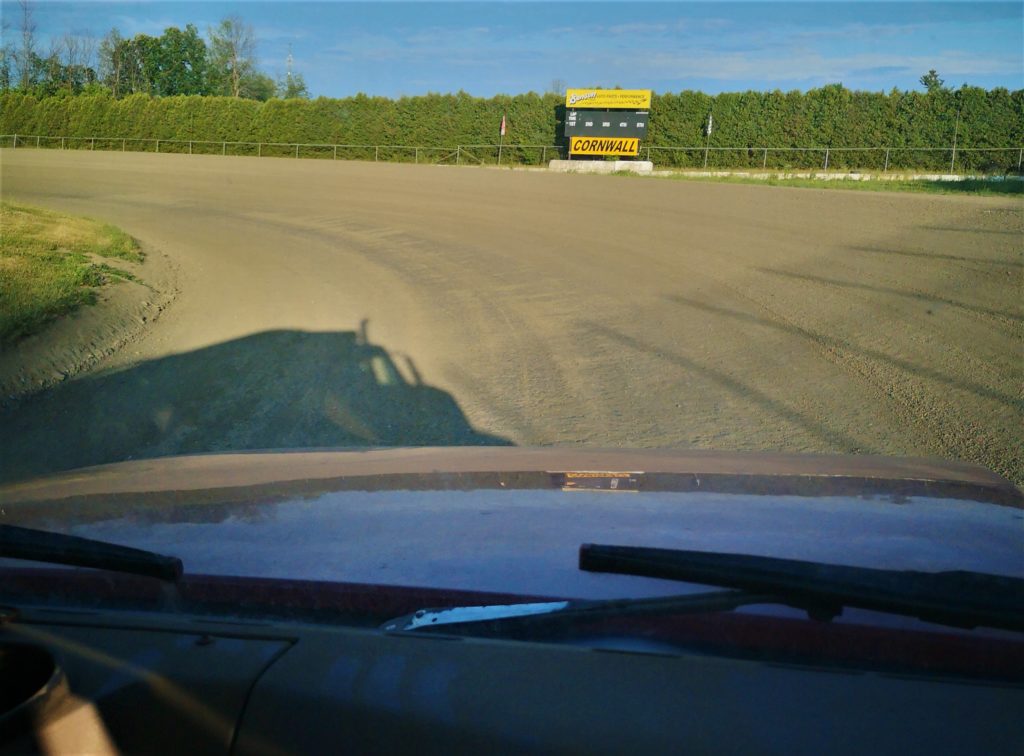 He had graded it the previous day and it need a bit of dowsing to give it some moisture.

We were optimistic the thunderstorms for Saturday would miss us.

Well, on Saturday morning while getting my camera stuff together, I heard the news, that the show had been postponed and a decision would be made later regarding the ‘rain date’ for Sunday.

The good news followed , and the show was ‘on’ .

Saturday night .was spent at home watching the FREE on-line broadcast live from the Merrittville Speedway, Ontario. They had a show for DIRTCAR  SPORTSMAN, with the 360 Sprints and 4 cylinders as the support divisions.

G FORCE TV were putting the event out, and it was very well done.

It was one of the best dirt racing transmissions I’ve seen, with the lighting and camera angles  just right and plenty of chat from Adam Ross, Clinton Jefferey and Greg Calnan.

The big race was won by Brad Rouse in the 18R.

So, about 3-30 pm on Sunday afternoon I was back at Cornwall Speedway, watching the long line of haulers enter the pits.

The forecast was for the possibility thunderstorms once again and it looked risky all night.

The 50 lap race for the 358 DIRTCAR Modifieds was the headline event , with the welcome addition of the DIRTCAR Pro Stocks.

The Vintage Modifieds and Lightening Sprints were also on the program as support divisions.

I had my usual pre-race wander around the pits and checked out a few friends. 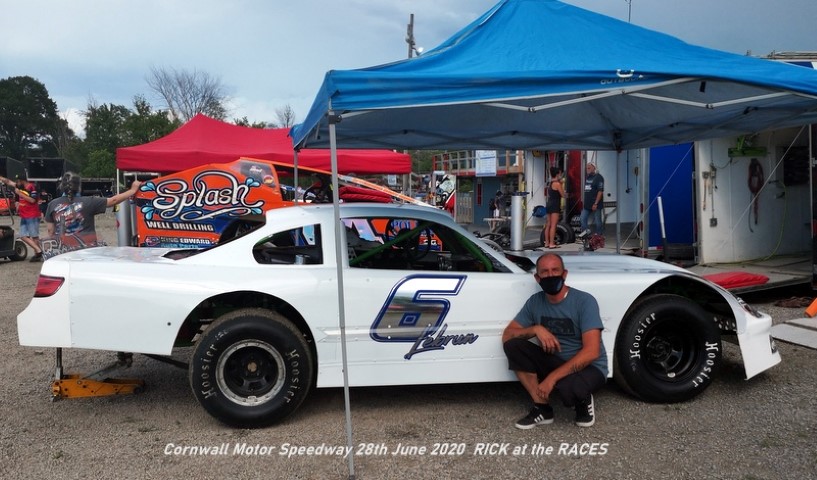 and the new Pro Stock of Stephane Lebrun. 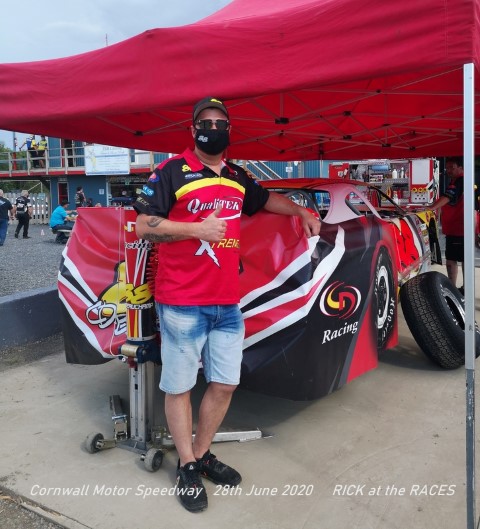 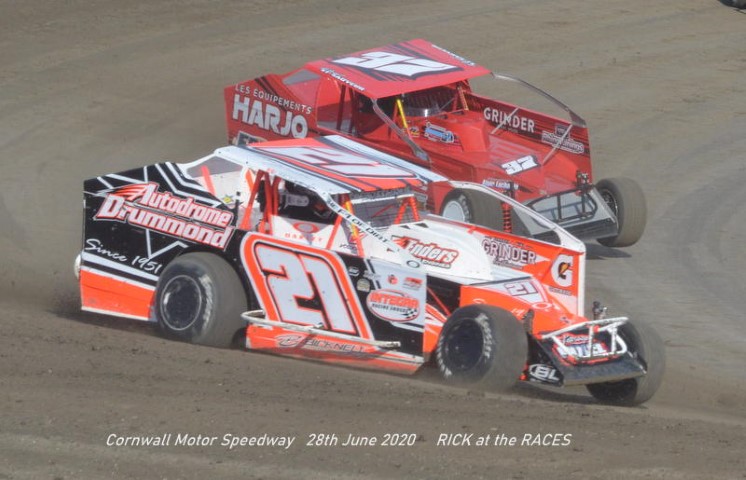 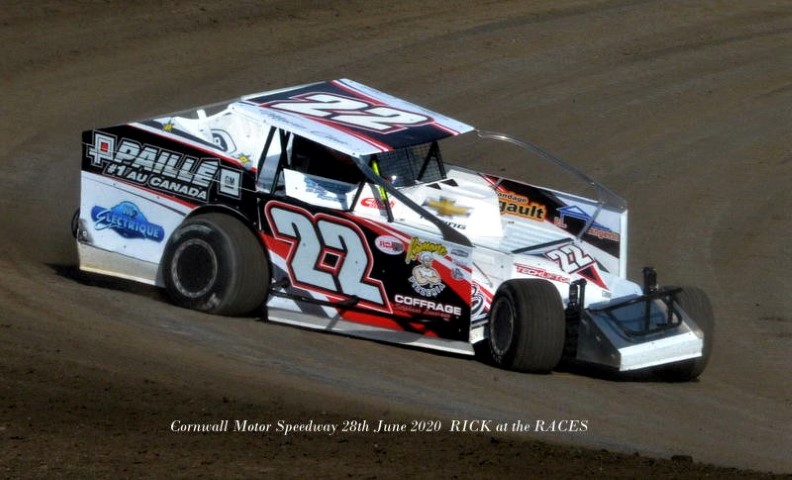 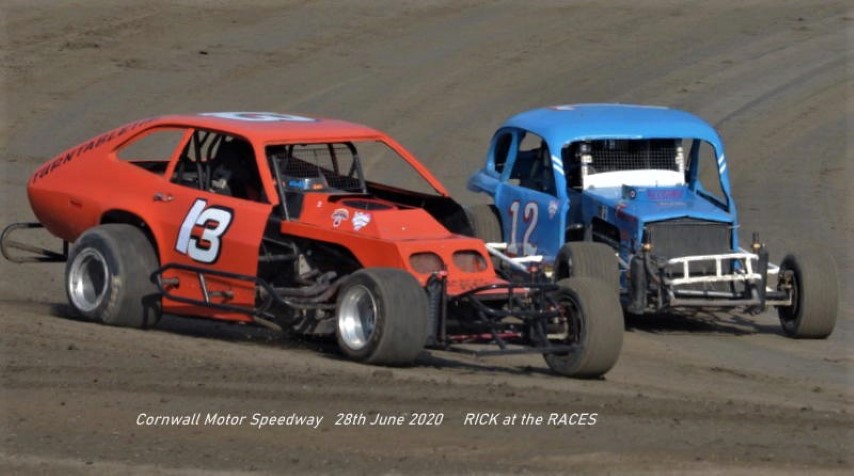 When the races began I was up taking pics in my normal spot on the pit tower , until the sun went down, and I retreated to the middle. 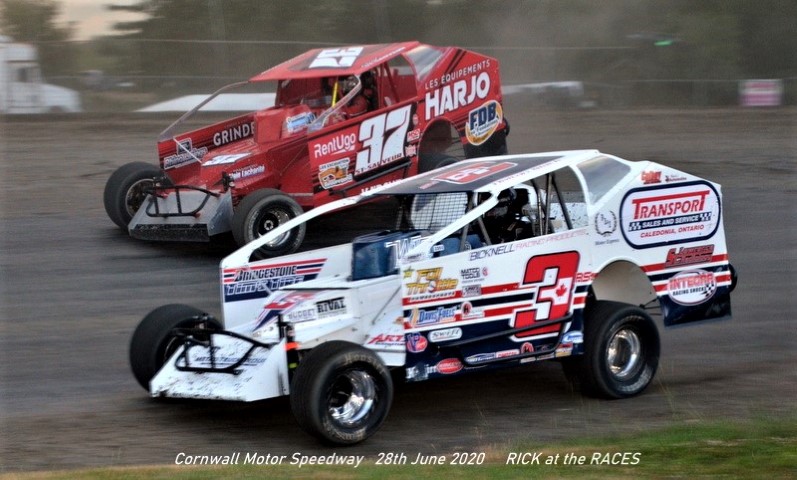 After the Modified Consi , it was feature time for  the Vintage , which was won by former Modified driver, Randy Gaudet. 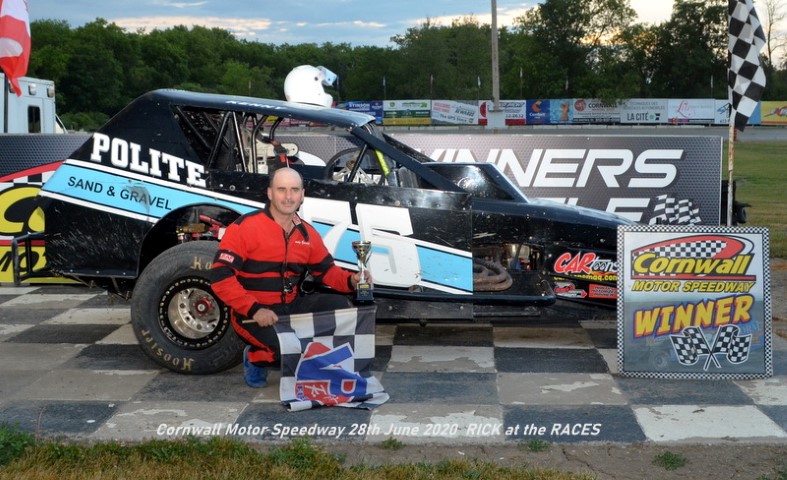 There was supposed to be an intermission at this point, but with the sky filled with dark storm clouds, the idea was scrapped.

Racing  continued with the Lightening Sprint Feature next. 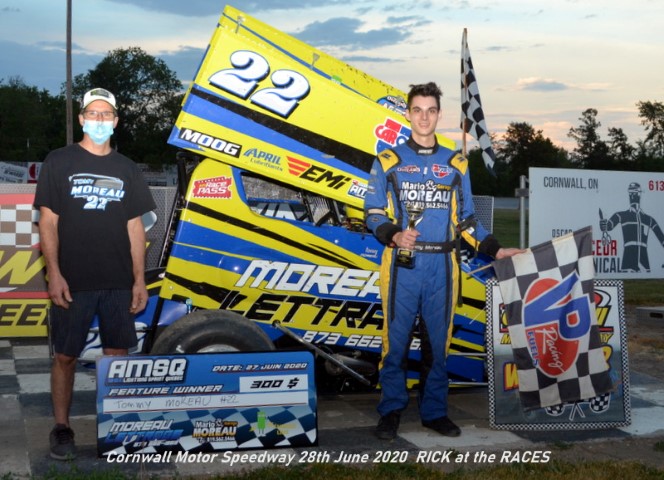 Tommy Moreau was the winner.

Luckily this went by with very little delays, and the main race of the day took to the track as the clouds got darker and spots of rain began to fall.  They didn’t last long and the clouds somehow missed us.

The race was a very good one with plenty of contenders. 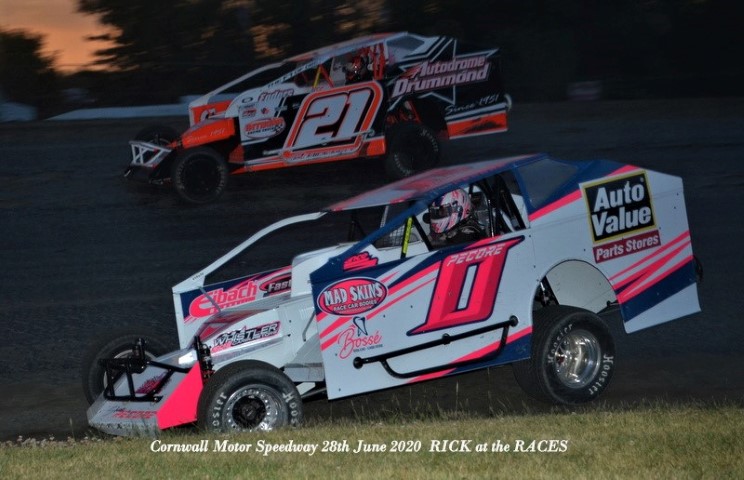 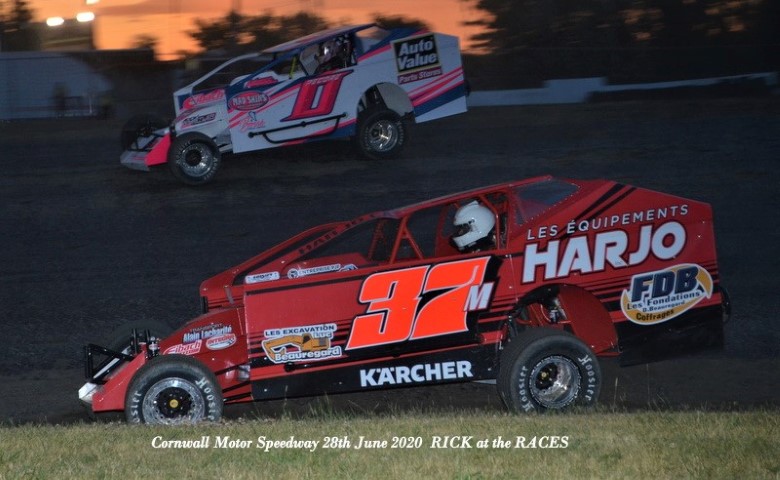 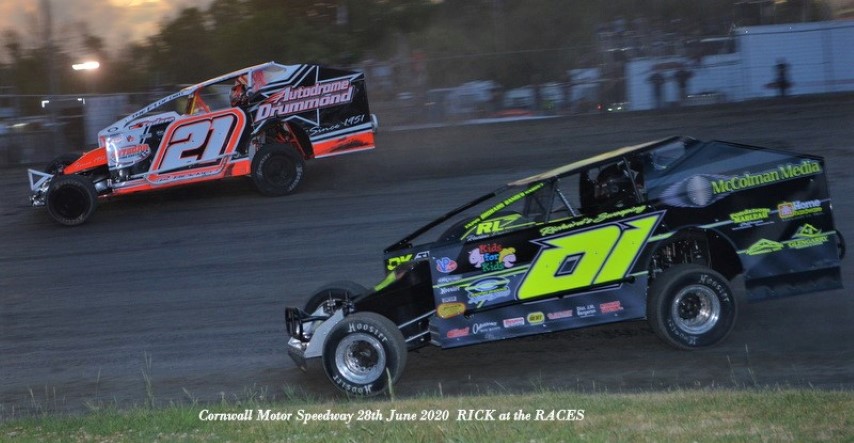 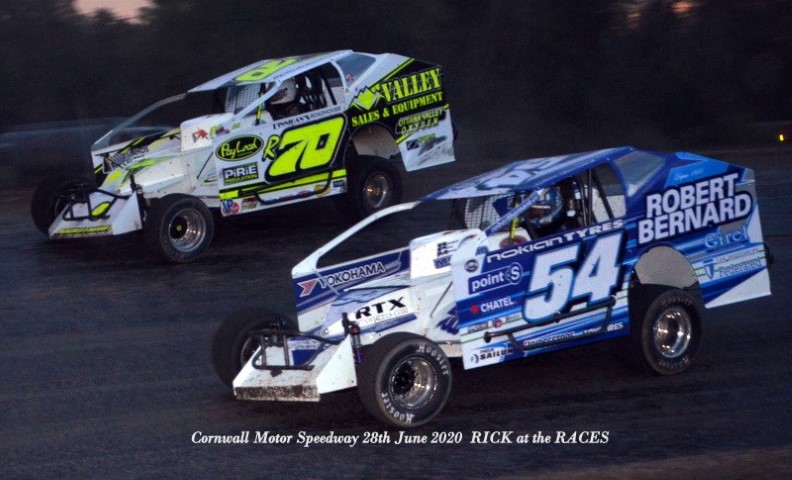 Early leader was Yan Bussiere 21  with Chris Raabe 01  close on his tail.

Shane Pecore 0 , Luke Whitteker 38 , Mario Clair 22, and Steve Bernard 54 were not far behind while Steve Bernier 25 was carving his way through the pack along with with Mathieu Desjadins 37M .

As Bussiere and the other contenders faded, Clair got to the front and stayed there while Bernier and Desjardins battled for second. Bernier got the better when it mattered. 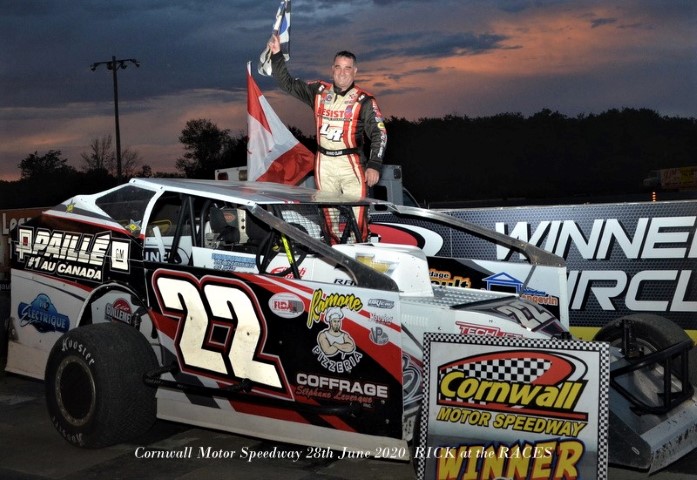 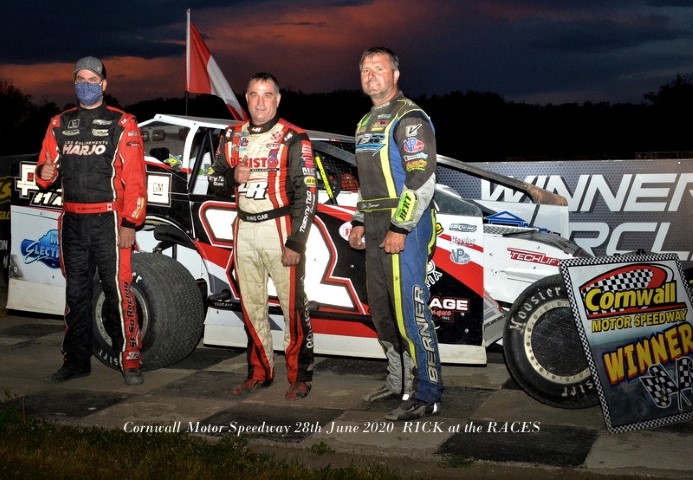 We had one more feature race to go, the 25 lapper for the Prostocks,  it was only about 8-30 pm and it looked like we had survived the expected down pour. 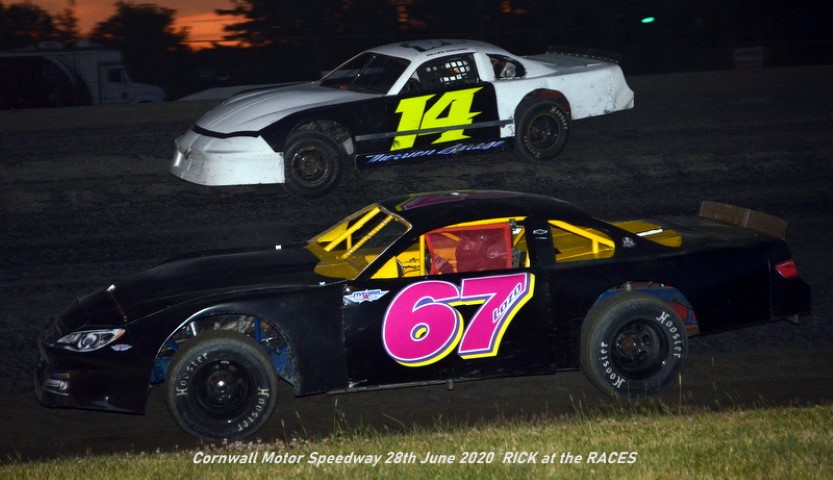 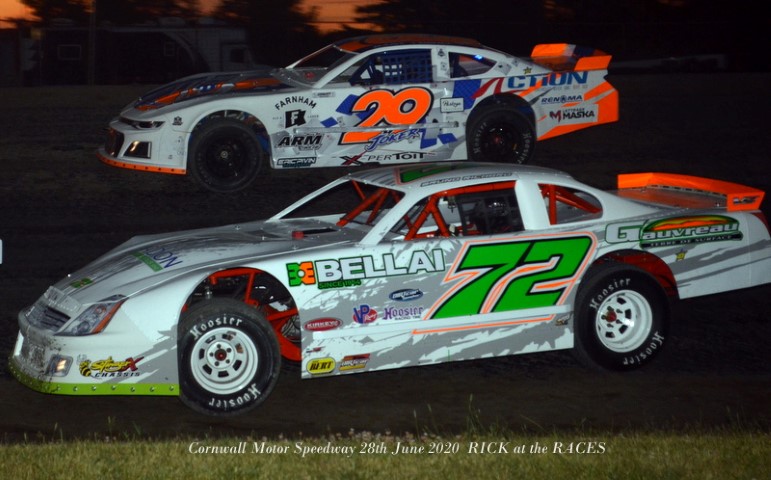 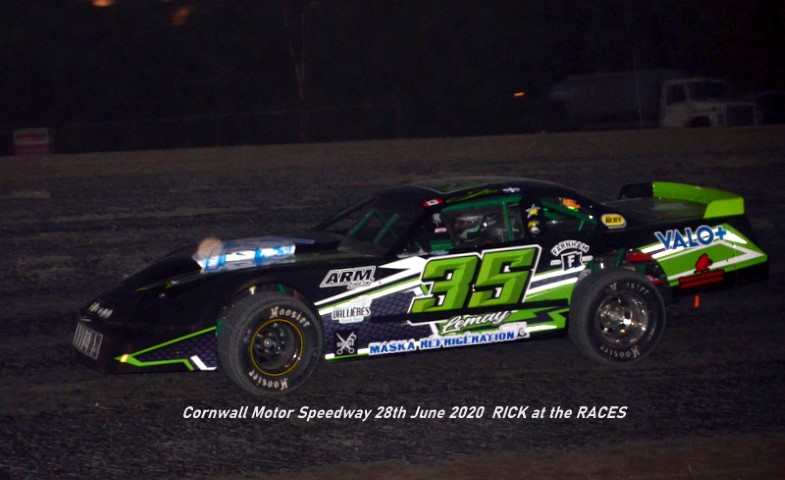 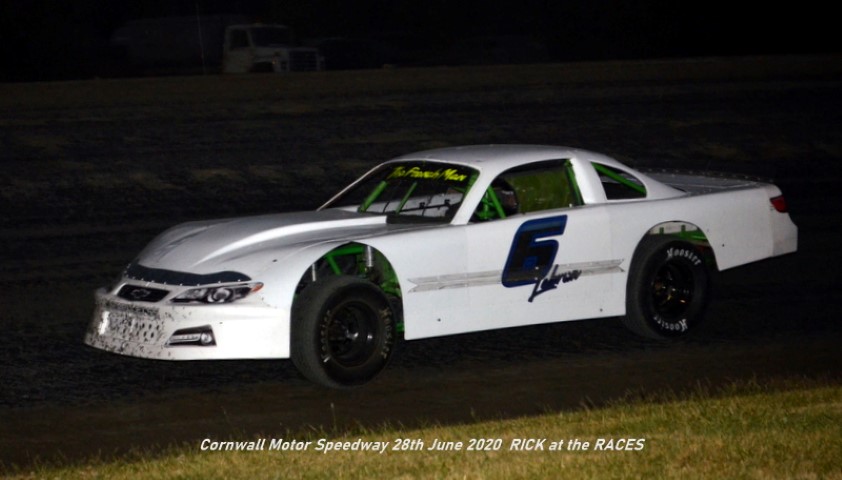 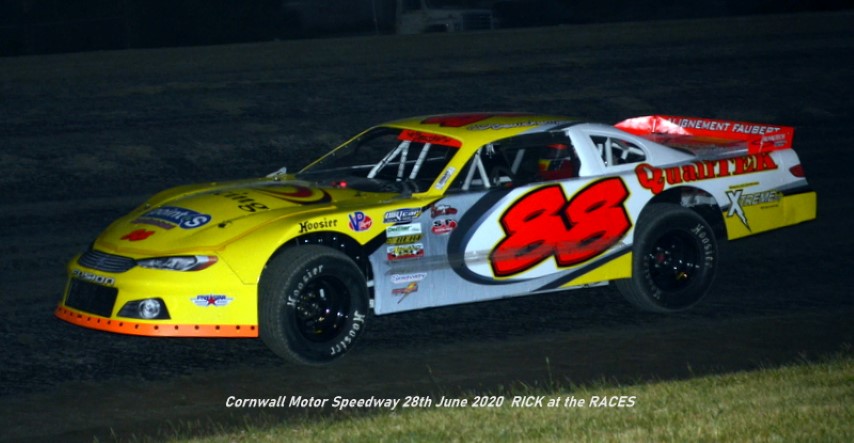 The Pro Stocks ‘behaved themselves’ and we had a very tidy race without too many incidents. 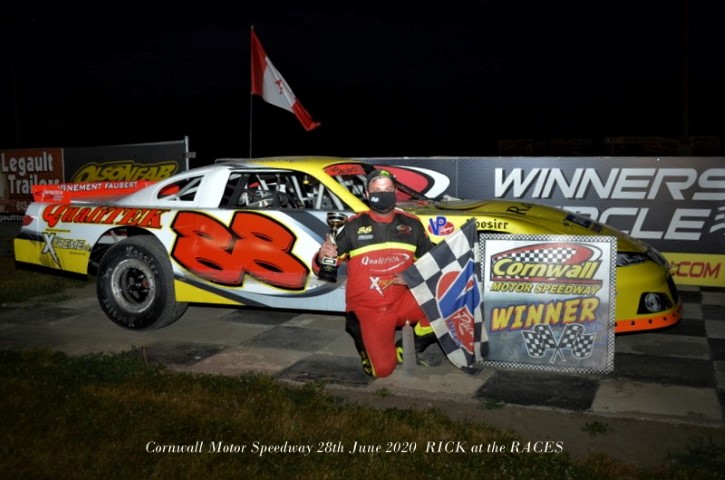 Before 9-00 pm we were in Victory Lane taking pics of the winner C.d Beauchamp. 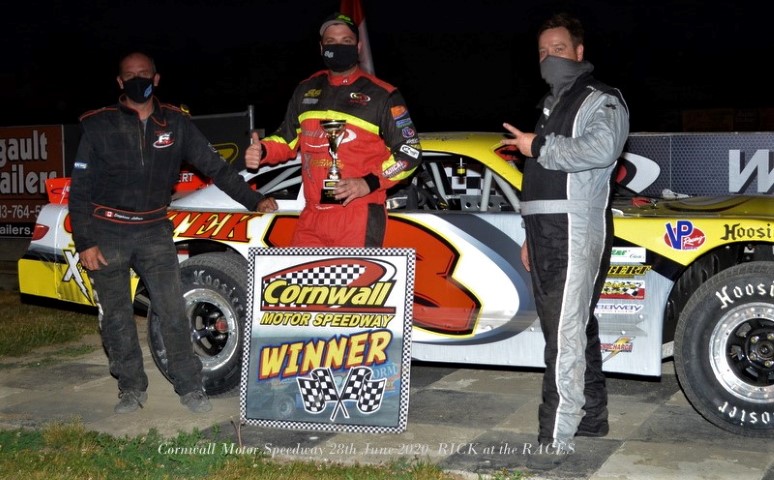 The first three were Beauchamp 88 , Jonathan Lemay 35 and Stephane Lebrun 6.

Coming up next weekend on the 4th July, Autodrome Granby has its second race of the year, 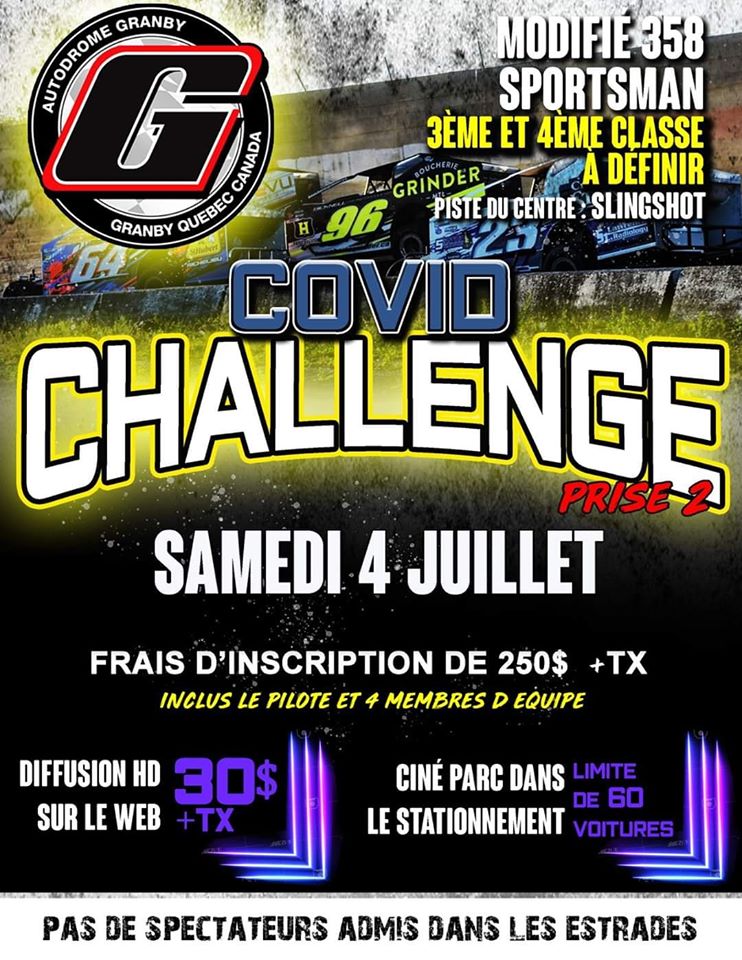