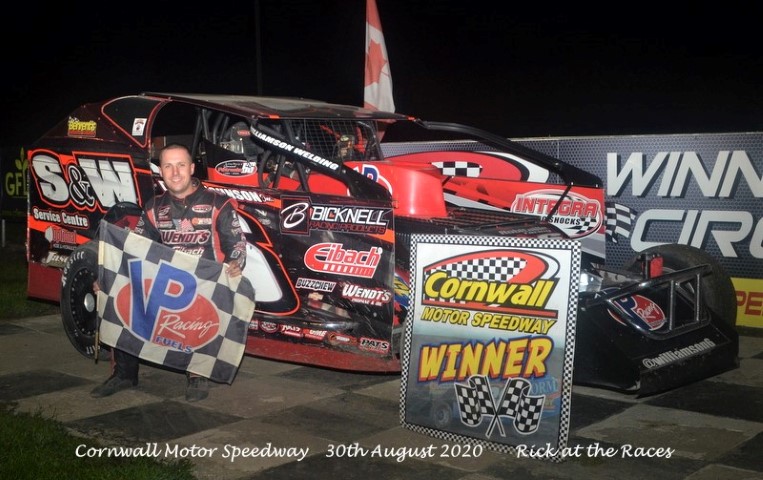 The past week was another one, where my original plans didn’t work out. This time it was down to Mother Nature, as most of my area was affected by heavy rain.

Things started off OK, when early in the week ( Tuesday ) , I took a drive across town to the Cornwall Speedways Kart track. I usually go along two or three times a year to check it out.

In the pits I took the opportunity of meeting a couple of the drivers,  possibly future  stars on the big track. 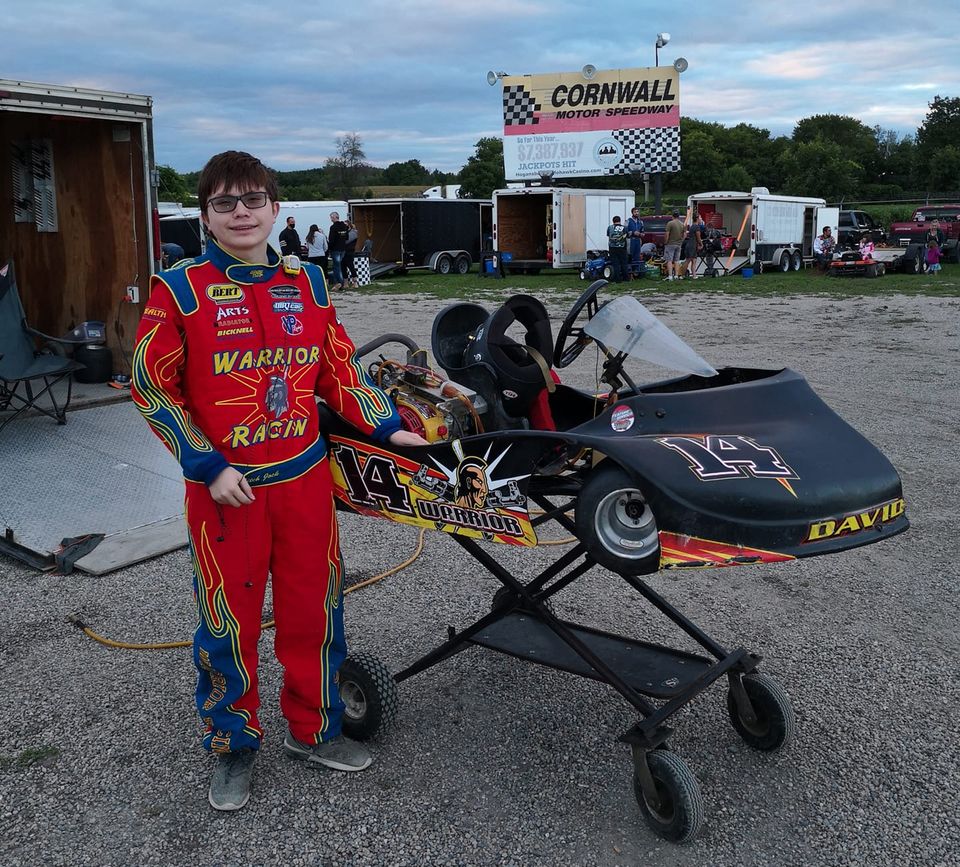 It was also great to see Ty David, son of the late Pro Stock and Modified driver, Mitch Jock. I’m looking forward to see him out on the big track before too long , so he can continue the families name in racing in my area. 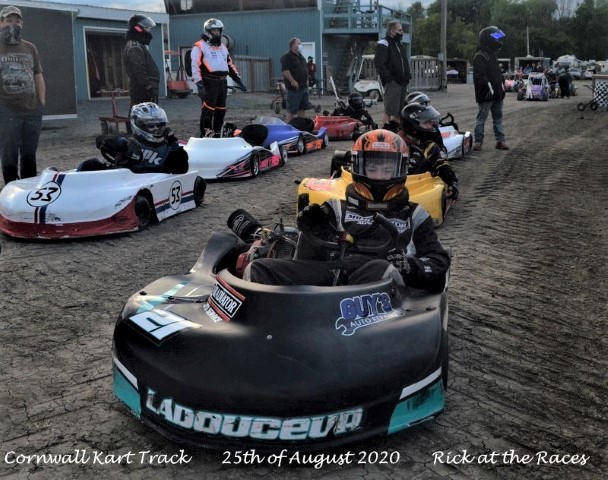 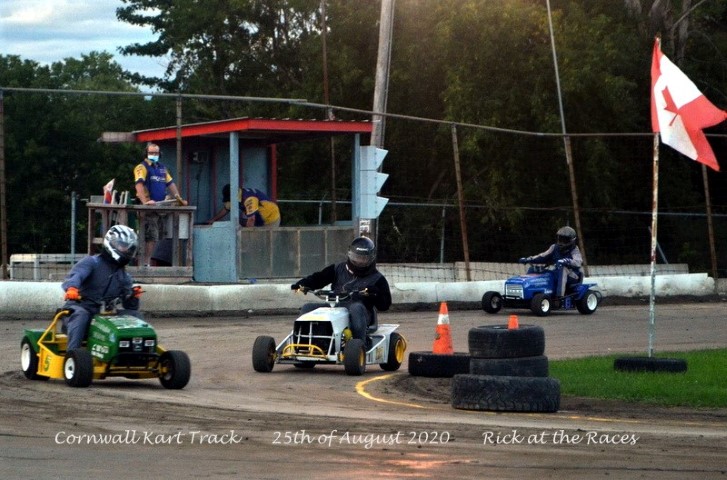 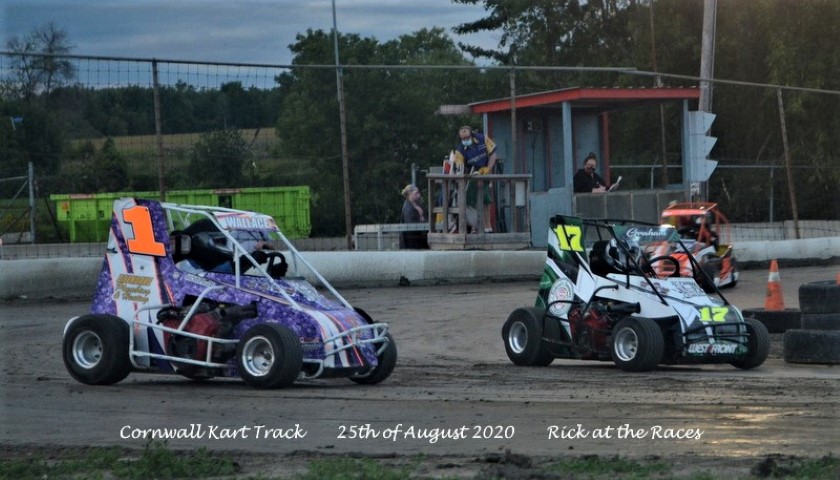 I stopped at the track for a while , and got a few action shots before heading back home.

On Wednesday I went on a little road trip to Pickering  Ontario ( on the outskirts of Toronto) to pick up two trucks !  , not real ones I hasten to add, but those of the  diecast model variety.

I was buying them to add to my collection. Regular readers will know of my passion for these. To keep me company on the long drive was my good friend, former Cornwall Motor Speedway owner, Ron Morin. 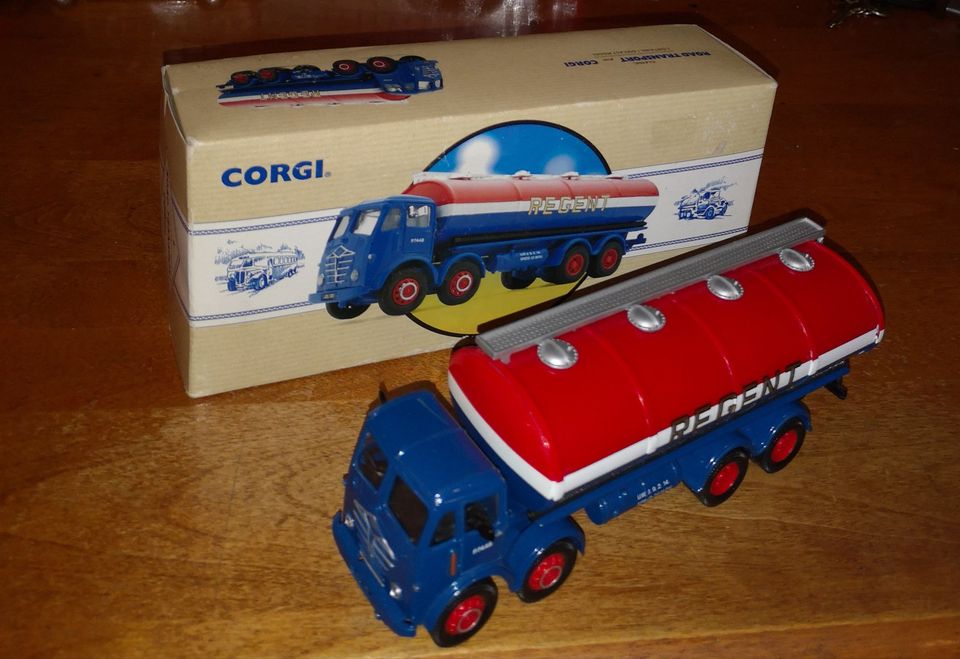 We were in Pickering for 3-00 pm where I purchased a vintage Dinky Bedford pallet truck and a ‘not so old’ Corgi reproduction boxed Foden tanker.

My plans for the weekend were to attend the Modified opener at Autodrome Drummond on Saturday and the Cornwall Motor Speedway on Sunday.

Alas, the weather forecast for my area looked  grim for Saturday, with heavy rain expected for most of the day. Sure enough, this was the way it was, and as expected, both Drummond and the other alternative at the Brockville Ontario Speedway, cancelled early.

This meant a Saturday night relaxing at home.

The forecast for Sunday was a lot better and the staff at Cornwall Motor Speedway did a great job of making the track raceable .

The program consisted of  Modifieds, Sportsman, Pro Stocks, Mini Stocks and Vintage.  The headline event was a 100 lap Sportsman race as a tribute to Billy Cook, who is celebrating 50 years of racing in 2020.

Prior to the races he was presented with a special award in pits as recognition, by track owners Raymond and Jacques Lavergne. 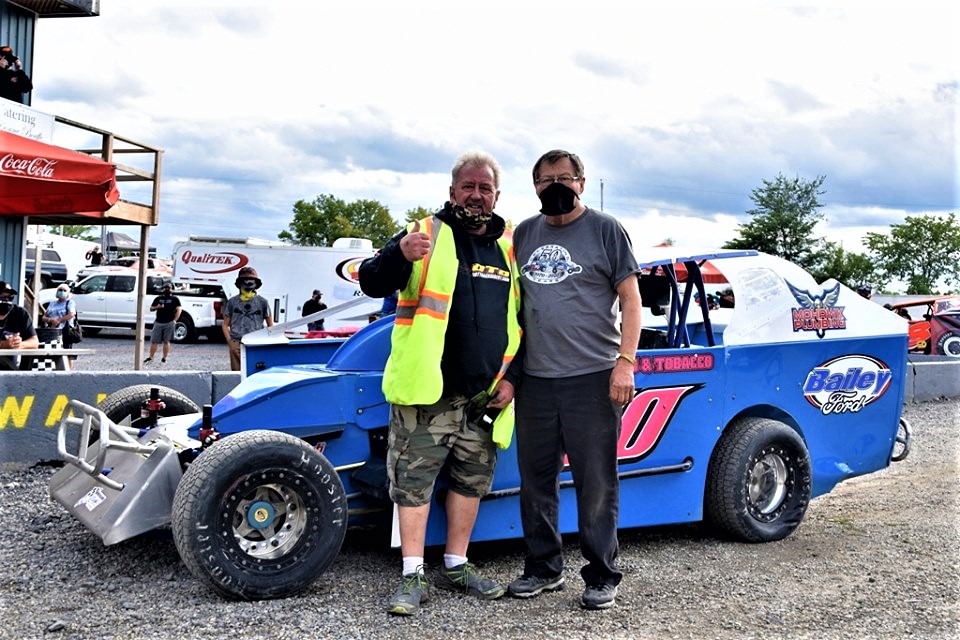 I’ve known Billy for many years, so I wanted my picture taken with him too. (Thanks to Sylvain Lauwers for the pic) ,

Also before the racing got under way , I caught up with C.d Beauchamp, the reigning DirtCar Pro Stock Champion, who chose his 32nd Birthday to switch to the Sportsman division.

He was there with a Bicknell, that he’d acquired from the Brianna Ladouceur team. 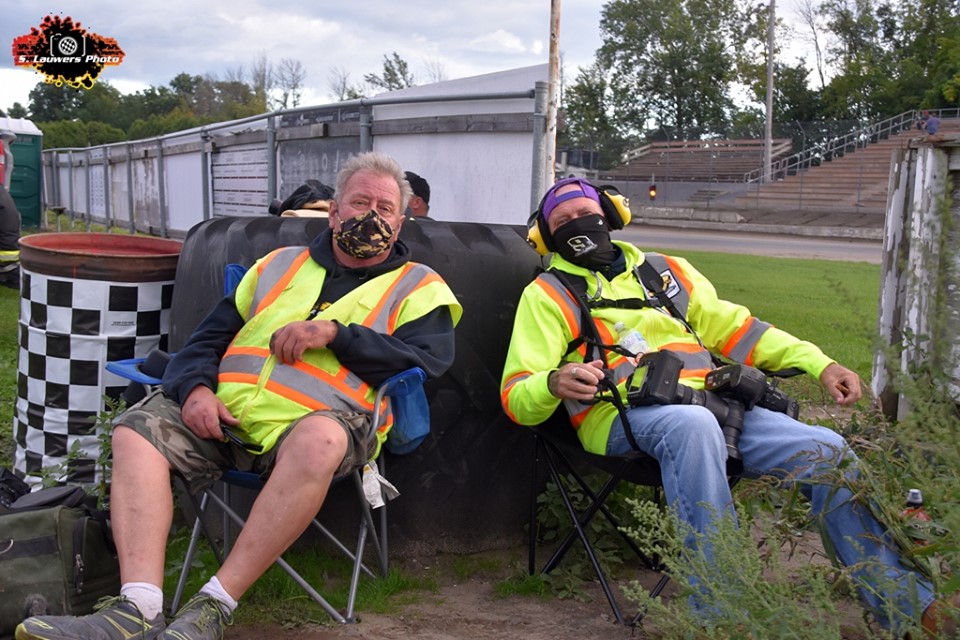 Once the racing got under way I joined my ‘Tog’ buddies out on the middle. 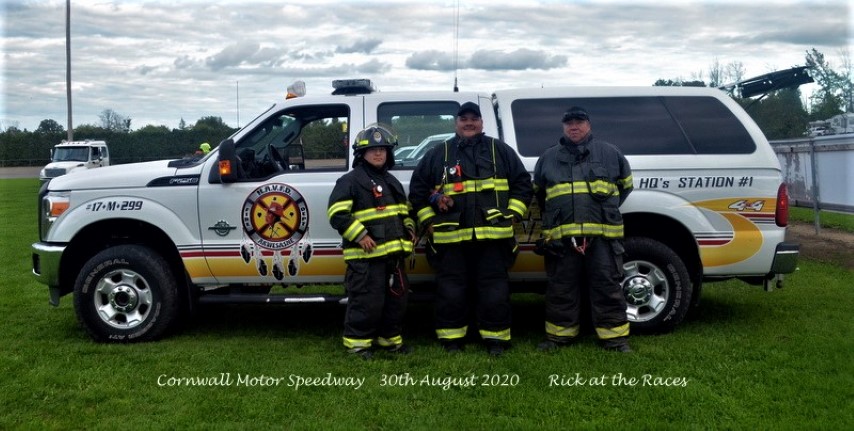 It was also nice to see my friend Derek Comins and his team from the Akwesasne HAVFD out on the middle , to honor Billy Cook on his special day.

What a pleasure it was to see a lot more Pro Stocks in attendance. I mentioned last week how the numbers were down, and this week we had enough cars for two good heats. 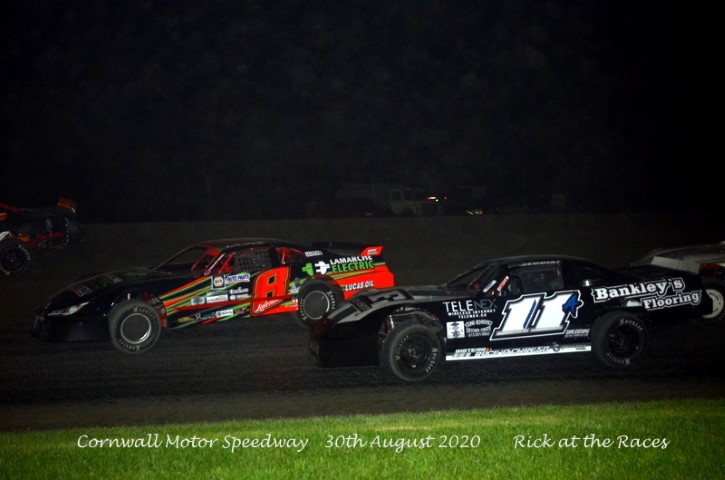 If there was one good thing to come about of the COVID 19 Pandemic, it’s the moving about the province of our Ontario drivers.

With the USA /CANADA border closed, it restricts the racing opportunities., so as well as our usual influx of Quebecers, we are now getting regular visits from south west of the province. I like it when we get a ‘Niagara  invasion’  . 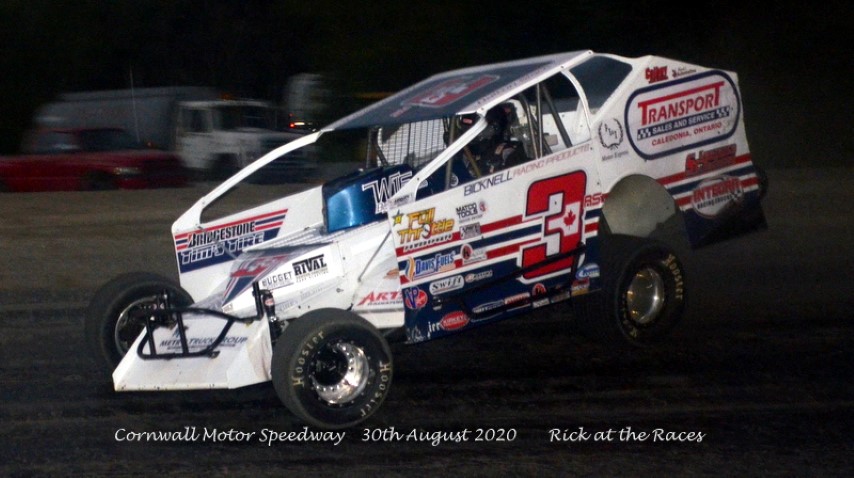 Fred Carleton # 96  , a Merrittville Speedway regular, told me in the pits earlier, it was about 25 years ago he last raced at Cornwall.

The first of the Features was for the Vintage Mods and once again this was won Jason Powers, with Kayla Charland getting the award in the lower division. 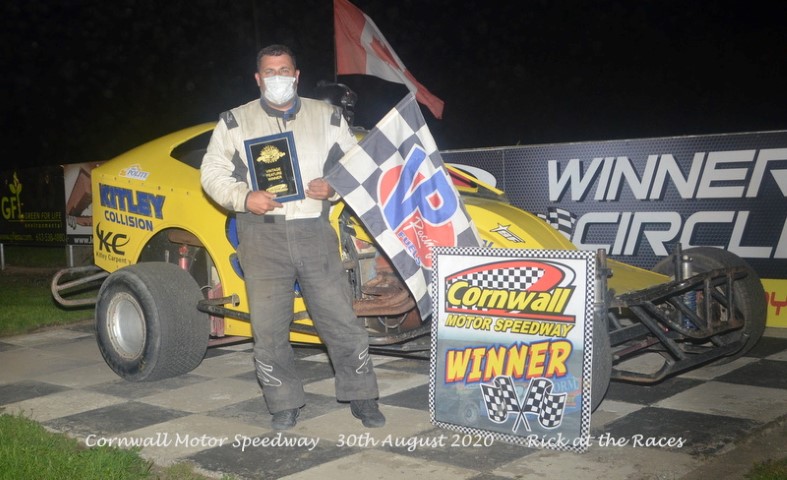 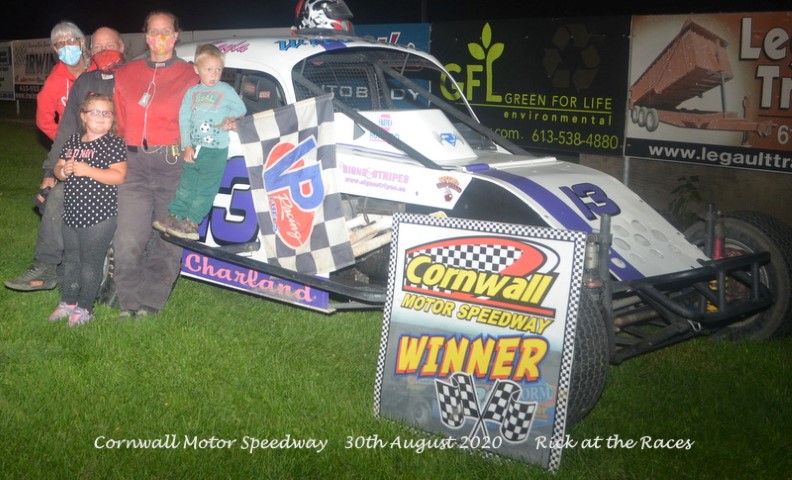 After a brief intermission the Pro Stocks were out for their Feature. This was an exciting one that was won by Bruno Richard. 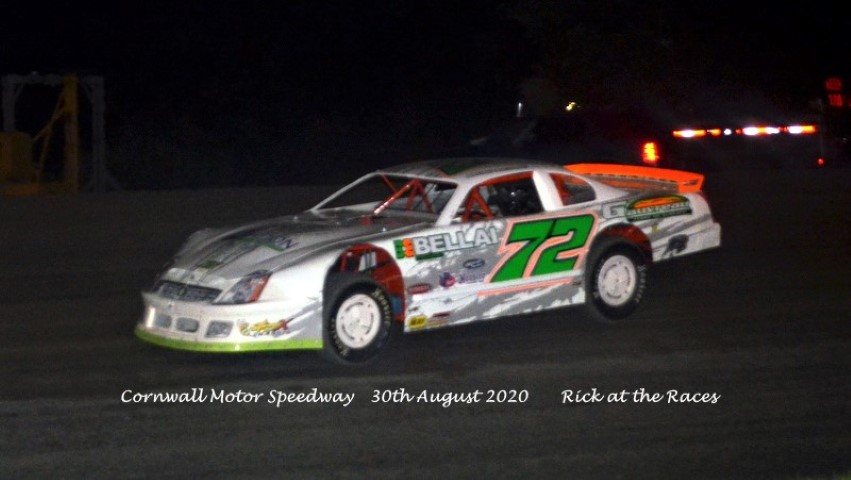 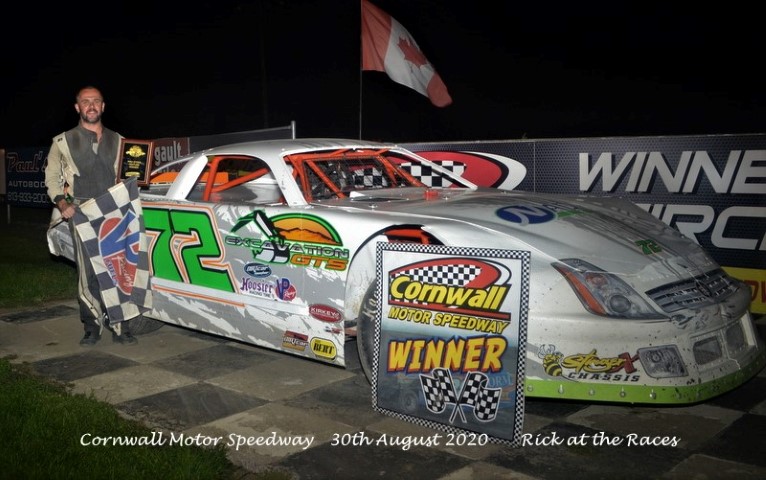 The Mods were on -track next, for their 50 lap feature. David Hebert controlled this one for most of the race as most of his challengers fell by the way side. As the race got down to less than ten to go Matt Williamson wasn’t far behind, and then a ‘red flag’ situation came in to play after a multi car crash on the front stretch. 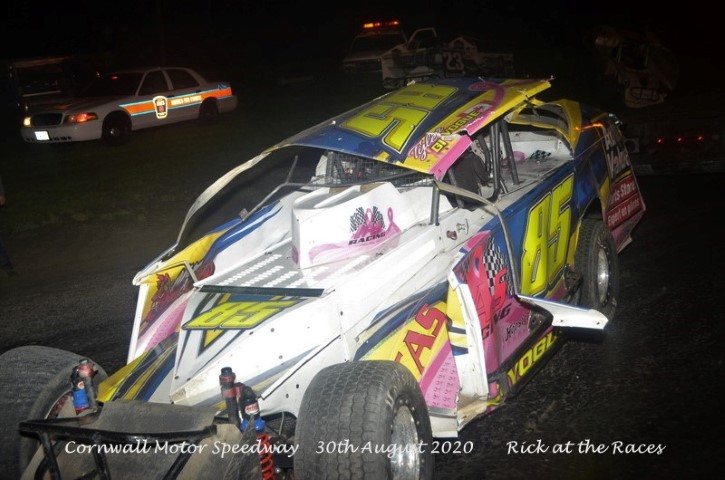 After the restart Williamson was still making no impression on Hebert, and even after a caution, with less than five to go, the picture was the same.

Everything looked set for a win by Hebert until the very last lap, when Williamson managed to find some bite on the top groove, and sailed past for the win. 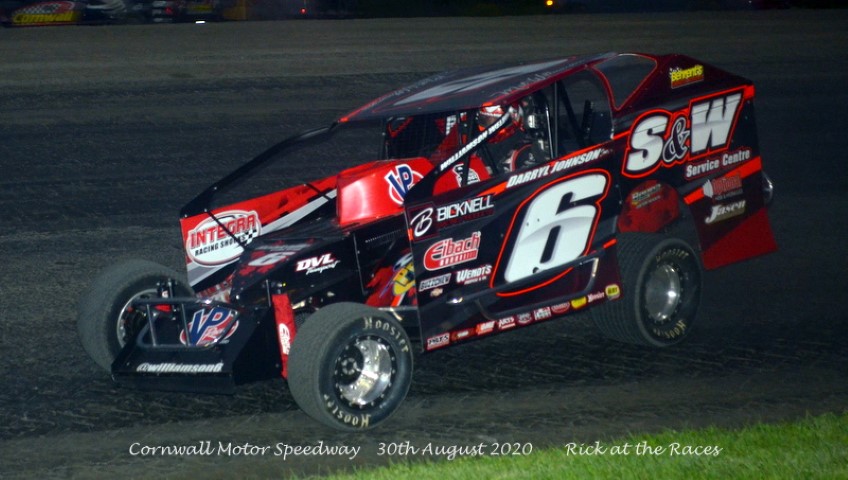 You won’t get an exciting finish like that too often. Quebec’s Hebert got the runner up spot , with Mike Bowman # 71 in third.

So with both Williamson and Bowman both coming from St Catherines, Ontario , it was kind of a ‘Niagara Invasion’

Next up was the salute to Billy Cook.  This was another good race , which was led in the early stages by Cedric Gauverau , who later slipped back as Robert Delormier, took the win. 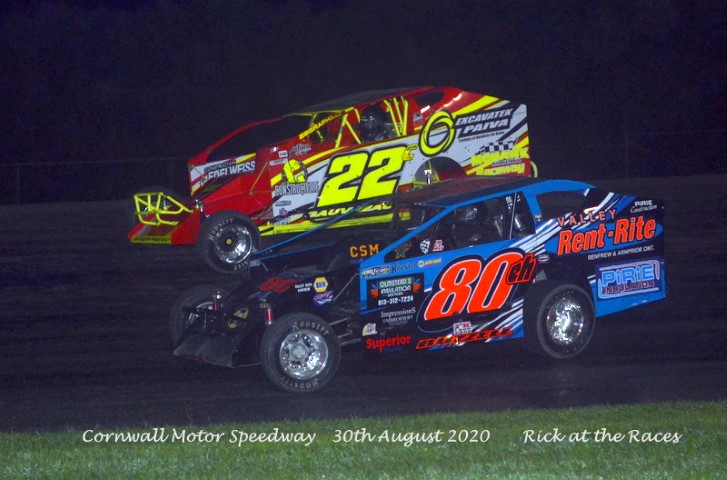 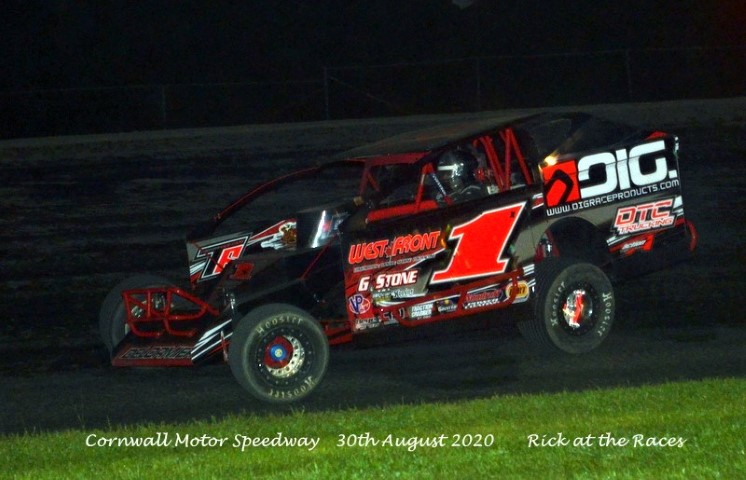 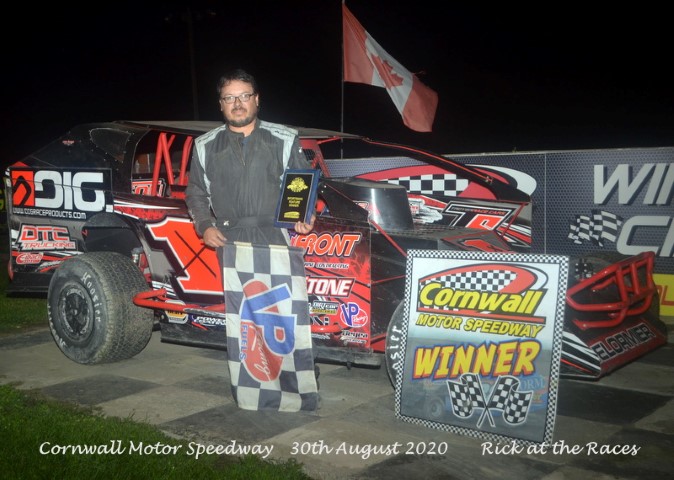 The Final race of the night was for the Ministocks, where Alexis Charboneau , put James Clark’s string of victories to an end when he took the checkers. 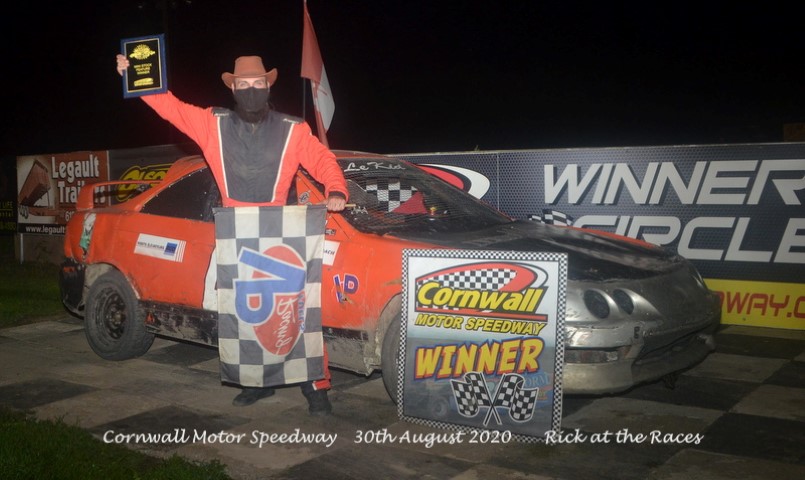 Full Marks to the track management for getting this great show in the books.