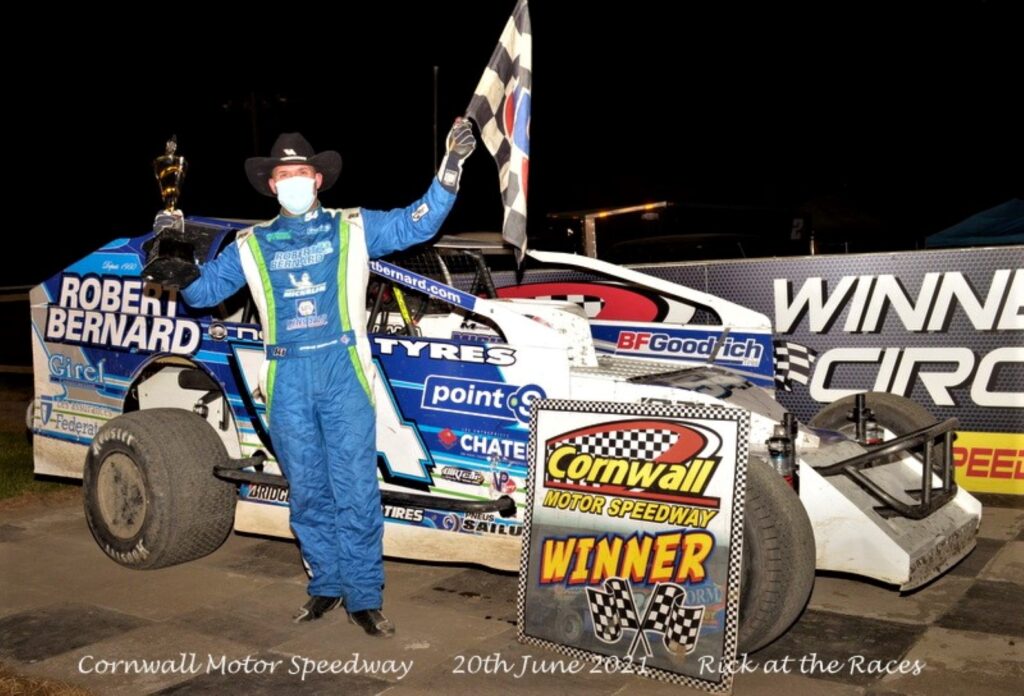 With another relaxation in COVID restrictions, racing was allowed to resume in Ontario.

Once again the Cornwall Motor Speedway led the way, with a week end double header, just as soon as they were allowed.

The two day event was held on  Saturday and Sunday 19th/20th of June.

Both days had Mods, Sportsman, Rookie Sportsman, and Mini Stocks on hand . Saturday had the addition of Pro Stocks, while Sunday had Lightening Sprints as an extra to the program. 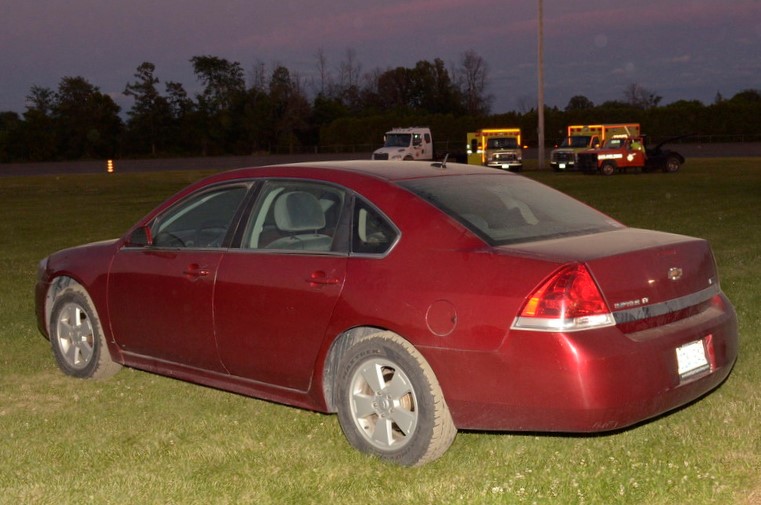 I arrived early on day one, and parked my car behind Victory Lane. It makes things easier when we get sudden rain storms, and I don’t have to carry everything from the parking lot.

Already a few long distance travelers were parked in the pits. 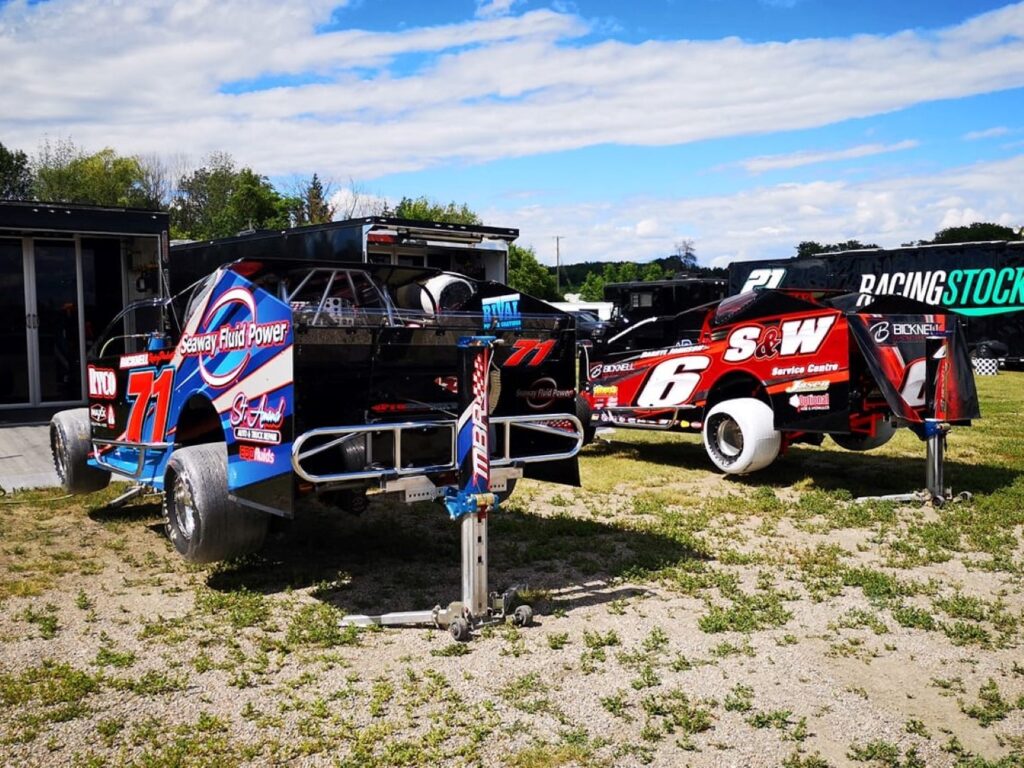 Mat Williamson and Mike Bowman had come up from the Niagara region.

As the pits began to fill I set up my camera equipment on the pit tower, 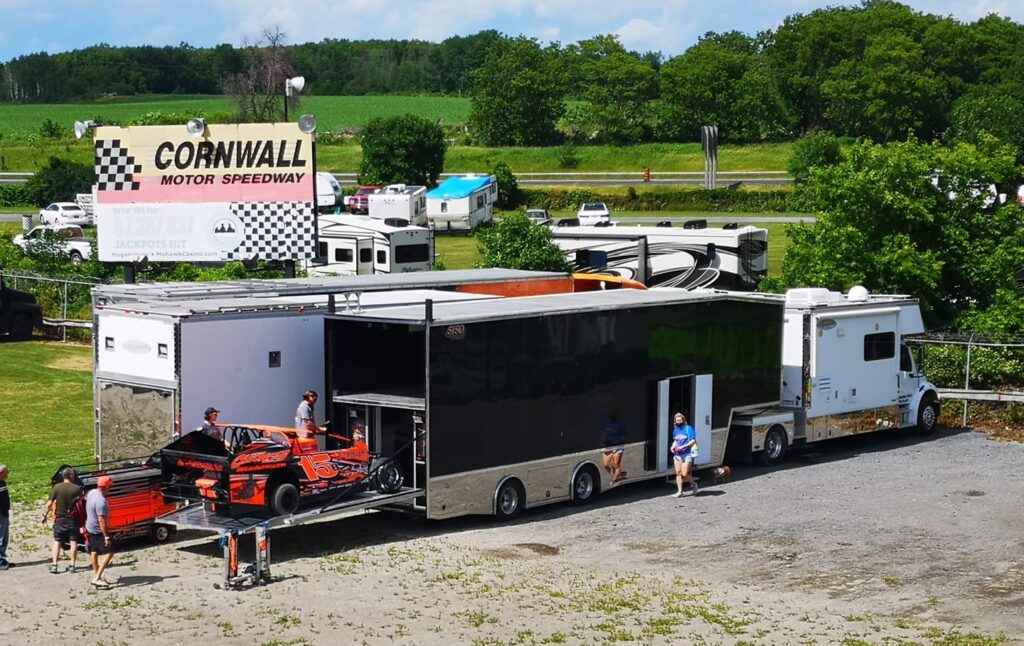 There was a lot to see when I set off on my pit wander . One of the first people I talked to, was Tommy Jock Jnr  # 31 and his daughter. 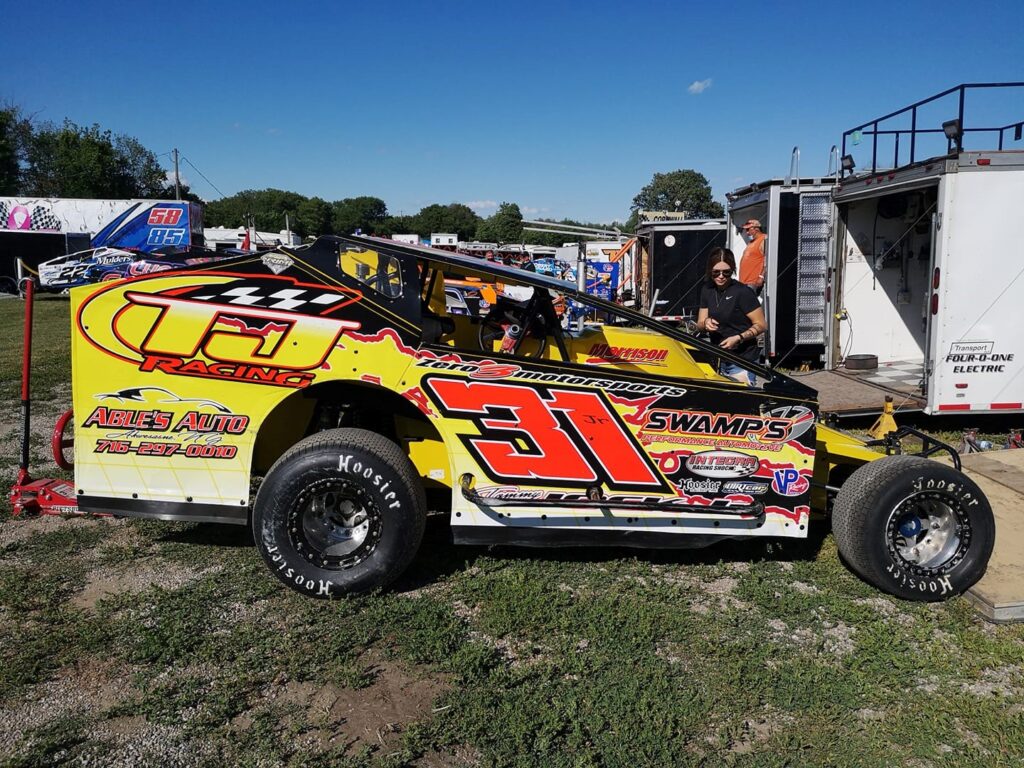 I’ve known Tommy for a long time. He comes from Snye, Quebec which is part of Akwesasne. 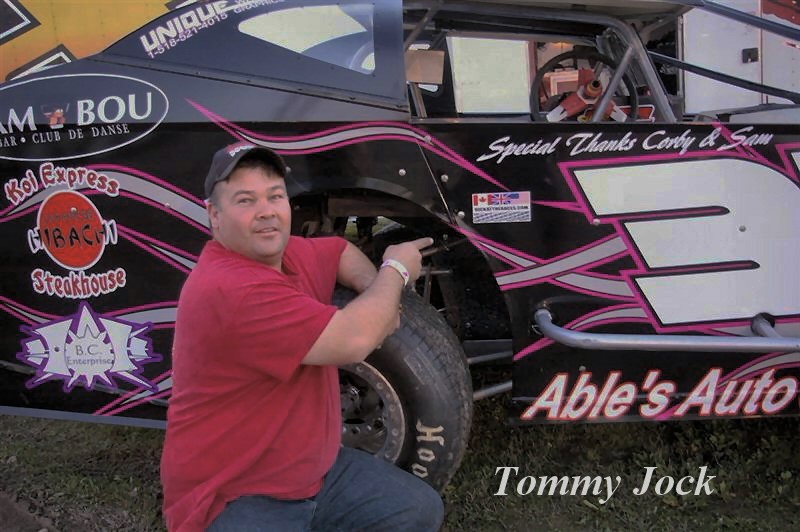 FLASHBACK    His was one of the first cars to have a Rick at the Races sticker.

I took a few pics from the pit tower before heading to the center for the rest of the night.

As for the Feature winners , they went like this.

First up was for the Mini-Stocks, where James Clarke carried on from where he left off last year, by taking the win. 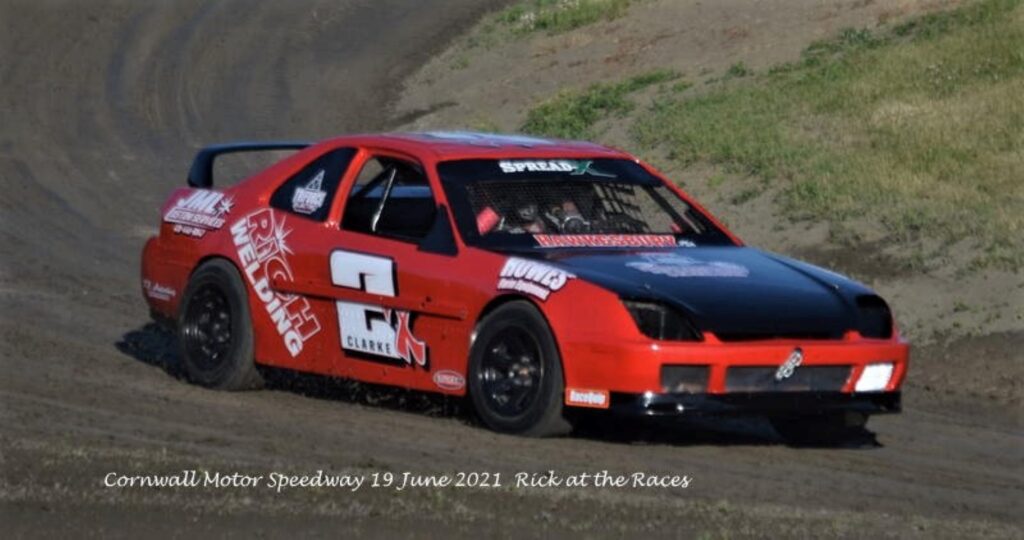 After the intermission the Modifieds were on track for their 40 lapper. 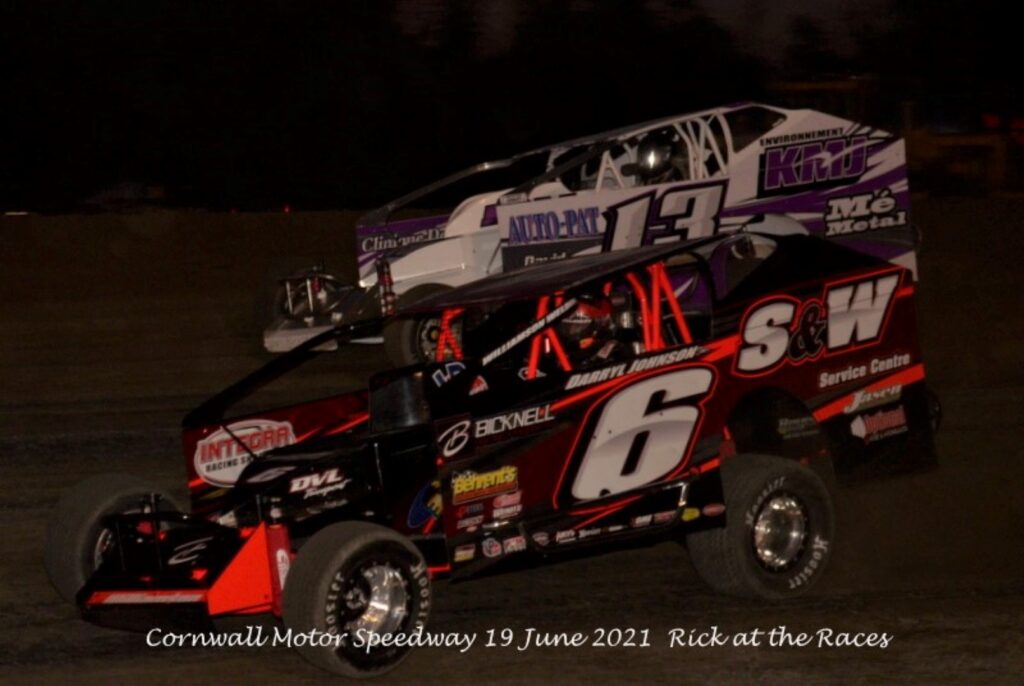 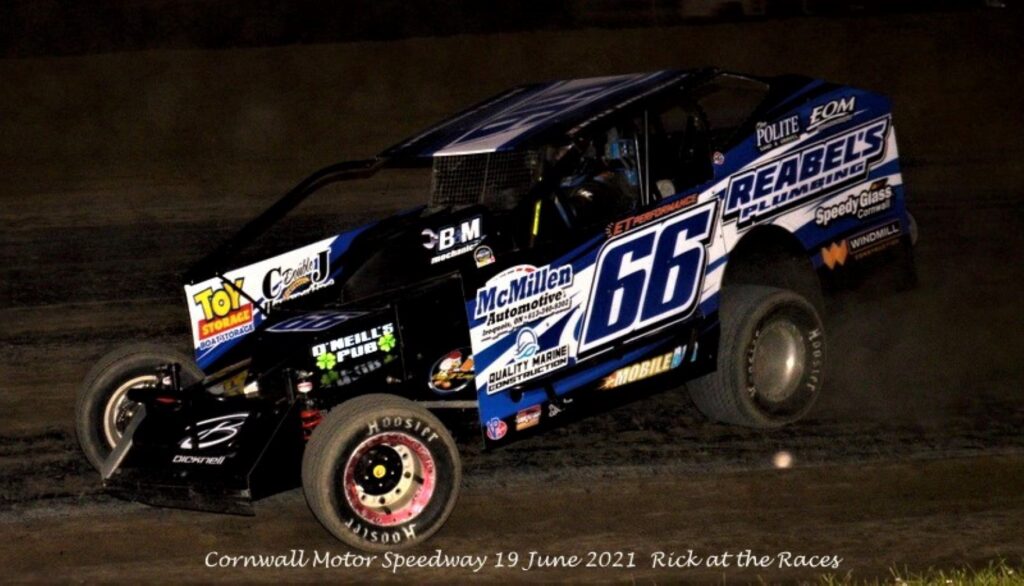 With Mat Williamson starting near to the front , most people were expecting him to win, but it was Kyle Dingwall, who drove a perfect race, keeping him at bay, to take the checkers. 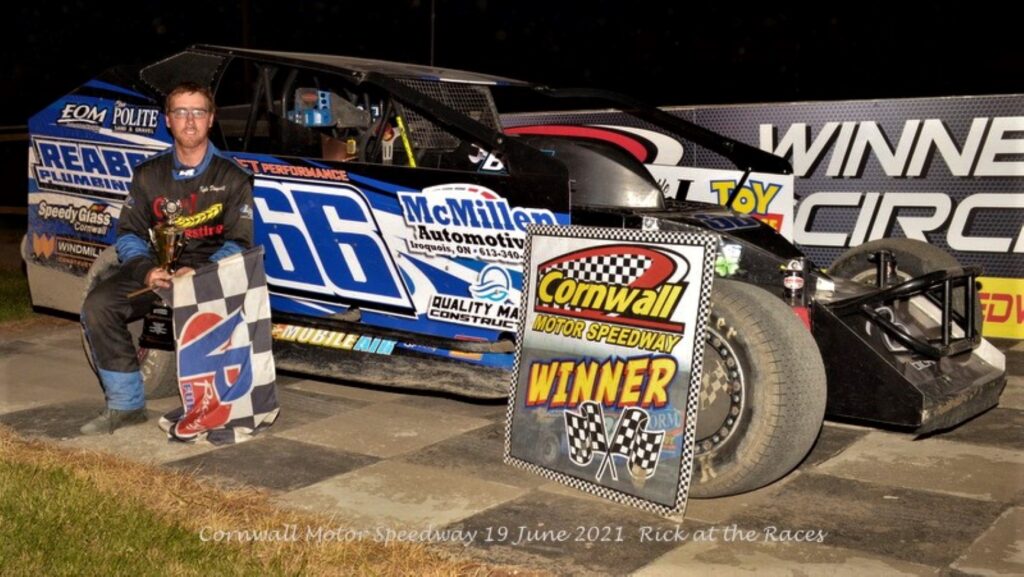 It was fathers day weekend so Chico , his dad was there in Victory Lane for the celebration pictures. 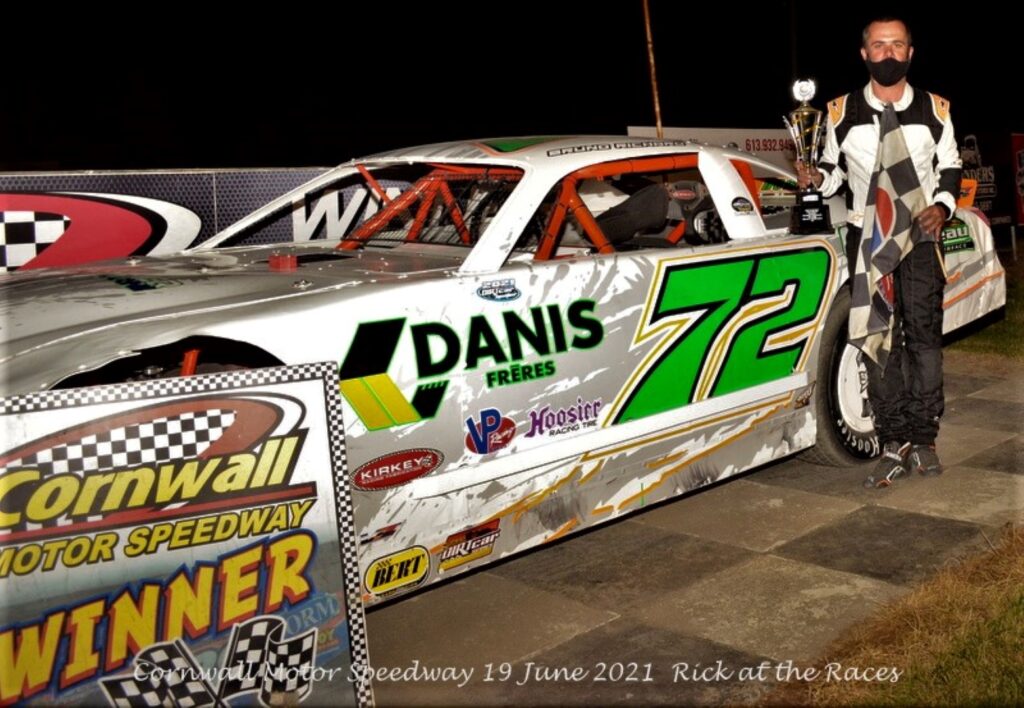 Next up were the Pro Stocks ,for their feature, where Bruno Richard got another victory . to begin the year as he ended 2020. 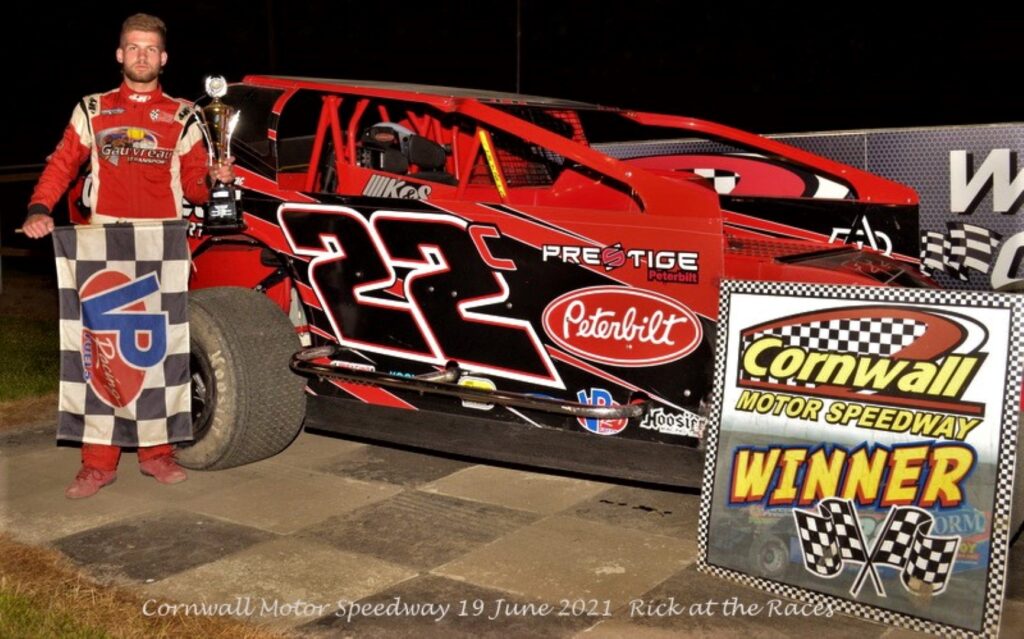 The Sportsman followed this and it was Cedric Gauvreau getting the win. This being his second victory of the year after taking the checkers at the Autodrome Granby opener a few weeks ago.

The Final race of the night was the Rookie Sportsman Feature where Eric Voyer got the win. This didn’t surprise me, as he looked the best of the crop , in the previous  days practice sessions. 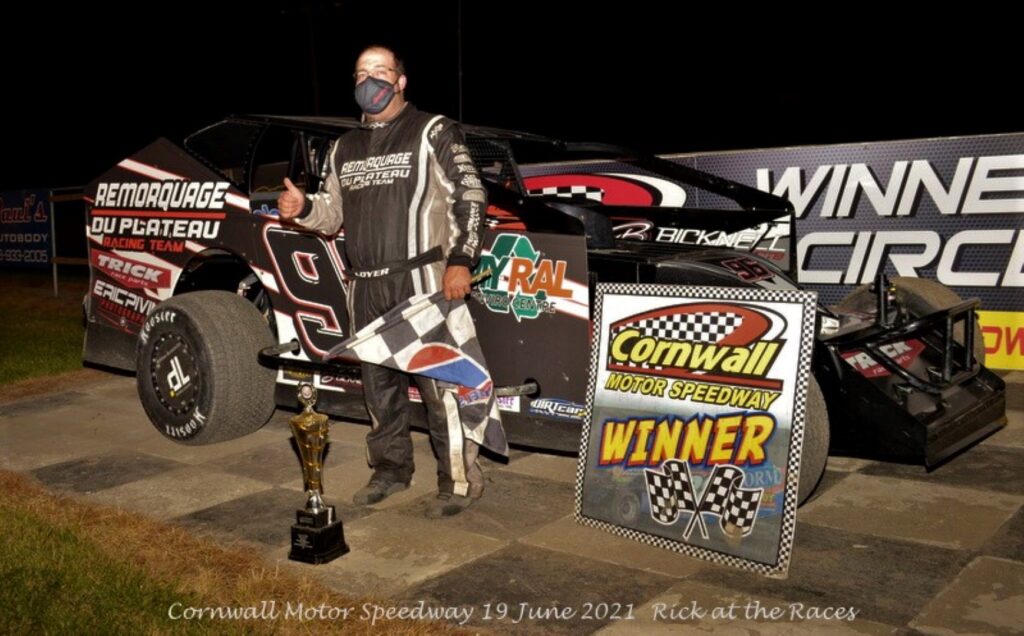 That was it for the night, so I was soon back home editing my pictures.

I was up early in the morning to watch the televised French Grand Prix from the Paul Ricard Circuit.

Well , I tried to watch it but the stripes painted all around the track, make viewing hard on the eyes. I opted to do a bit more more editing  , while listening to the commentary in the back ground.

Max Verstappen in the Red Bull was the winner.

By mid afternoon I had returned to the Cornwall Motor Speedway, for day two, of the Back to the Track double header.

One of the first people I visited in the pits was Sandy McFarland, a neighbor of mine in Cornwall. 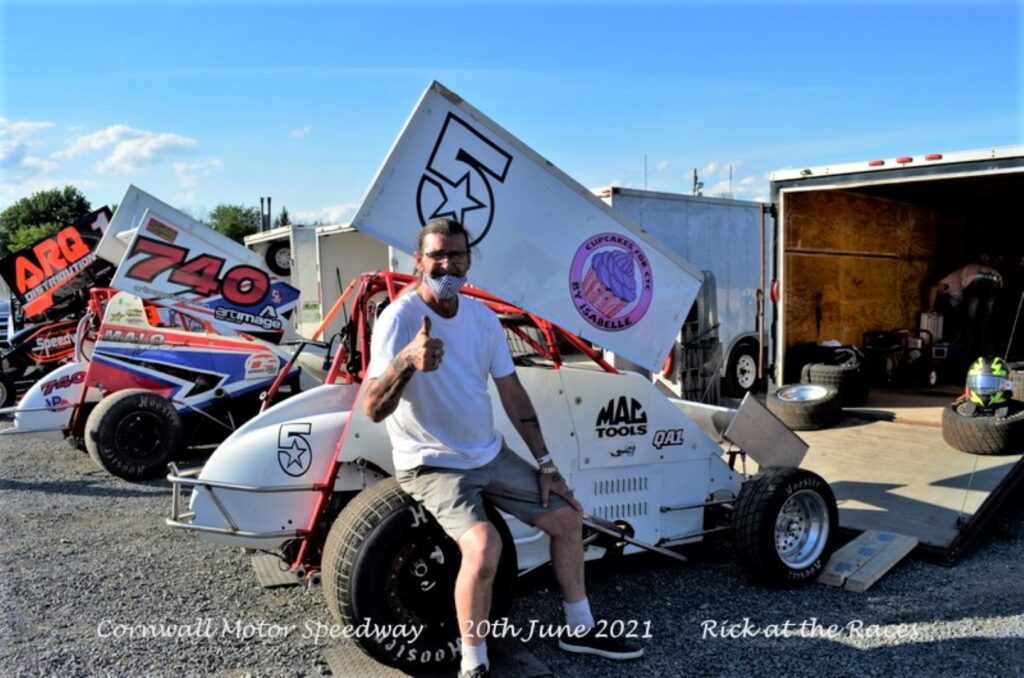 He is a former Modified driver, and after an absence of over twenty years, was returning to the track in a Lightening Sprint.

He was in the # 5 car that was previously raced by Mike Gaucher.

The  racing was a bit late getting under way due to a drainage issue on the track. It needed a lot of packing to get the water off .

It was later found to be a blockage of debris from the previous end of season Enduro.

Once the track was ready for racing  , it was time to play catch up so things had to be moved swiftly with the minimum of delays.

First of the Features was for the Rookie Sportsman which turned out to be a history making event. 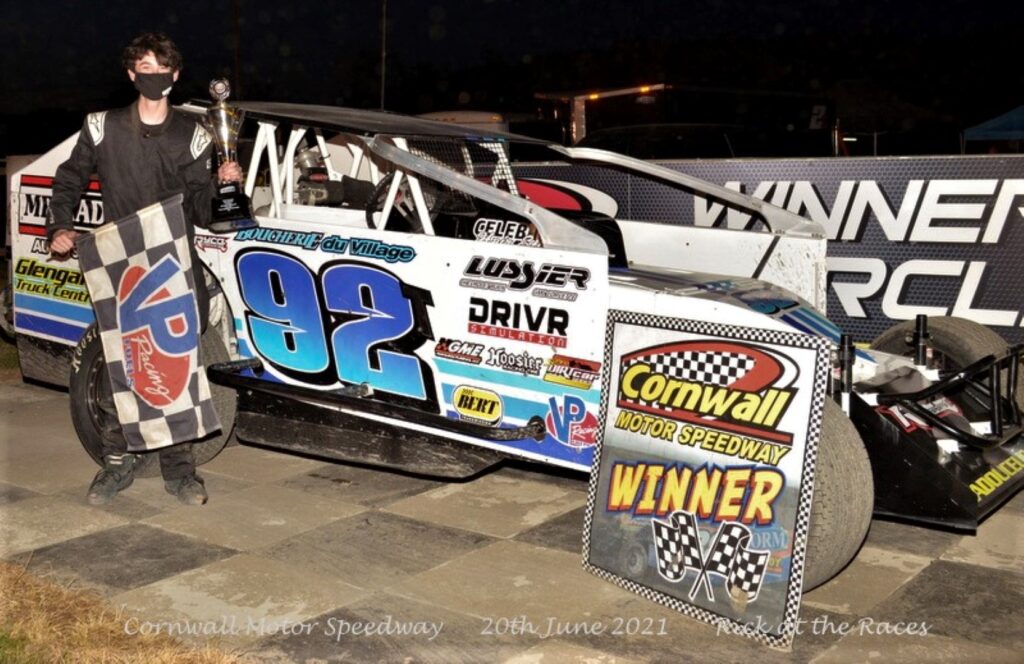 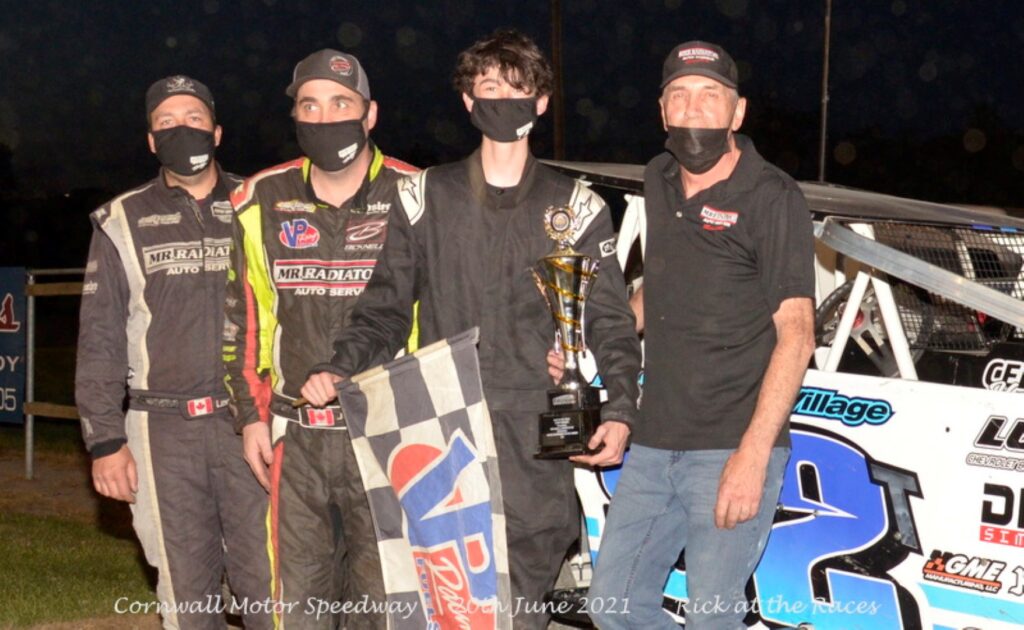 Tristan Ladouceur got his first ever win after graduating from the kart track. Being the son of Joey, grandson of Laurent and nephew of Lee, it was foregone conclusion, and just had to happen. 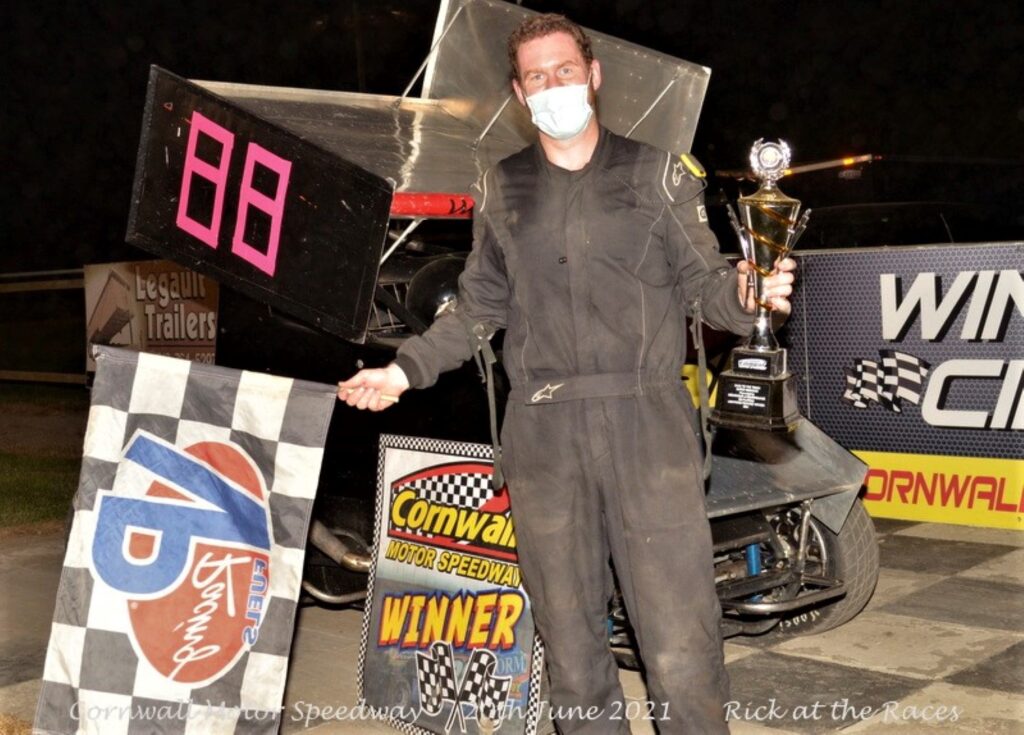 The Lightening Sprints were next up, and this one was won by Jeff Weare

Just a few minutes of intermission were taken, as we were still in recovery mode, following the late start.

The Modifieds then moved on to the track with Mike Bowman dominating for most of the race. 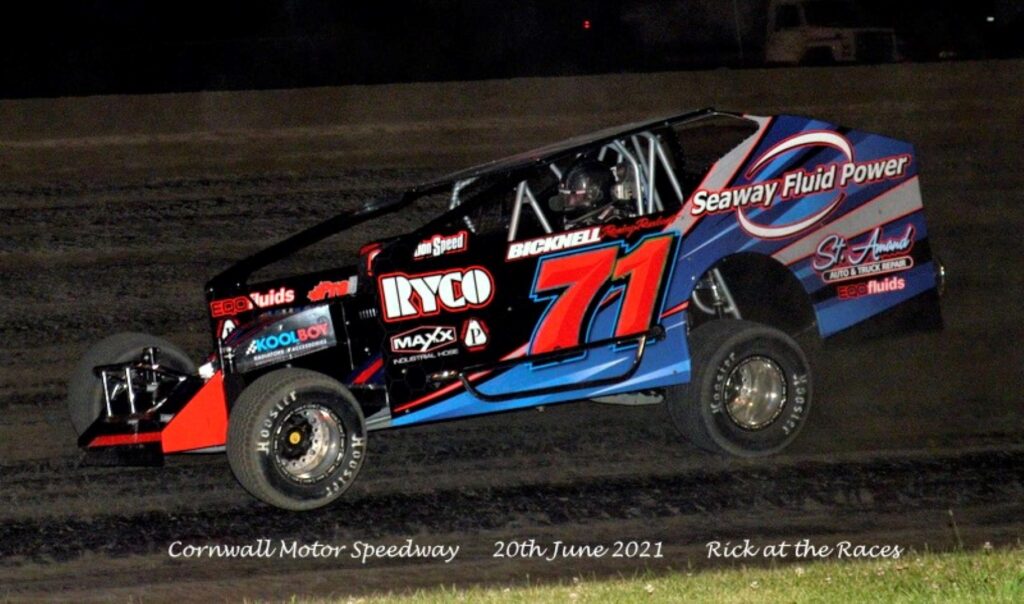 Meanwhile Steve Bernard was working his way to the front, by using the top cushion,

With just a few laps to go he swept past Bowmen to take the checkers. 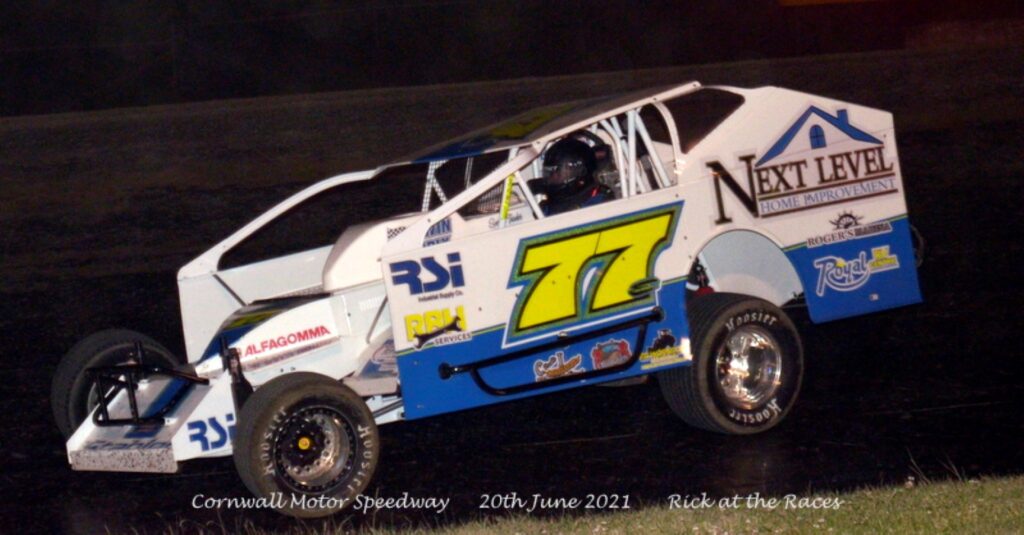 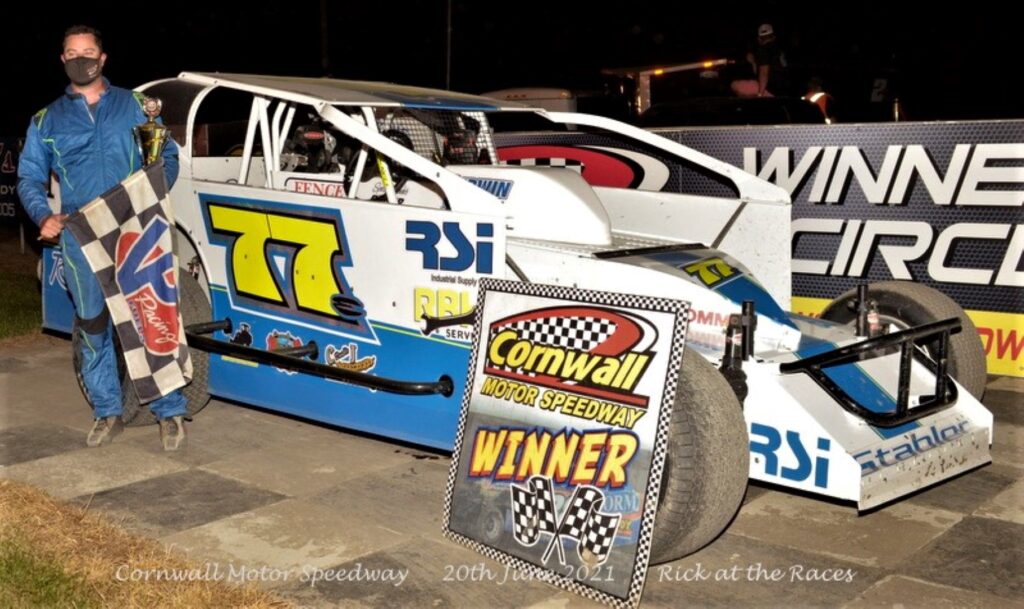 Next up were the Sportsman where local driver # 77 Ryan Stabler took the win.

A lot of time was made up and the final race of the night for the Mini Stocks was all over by 11-30 . 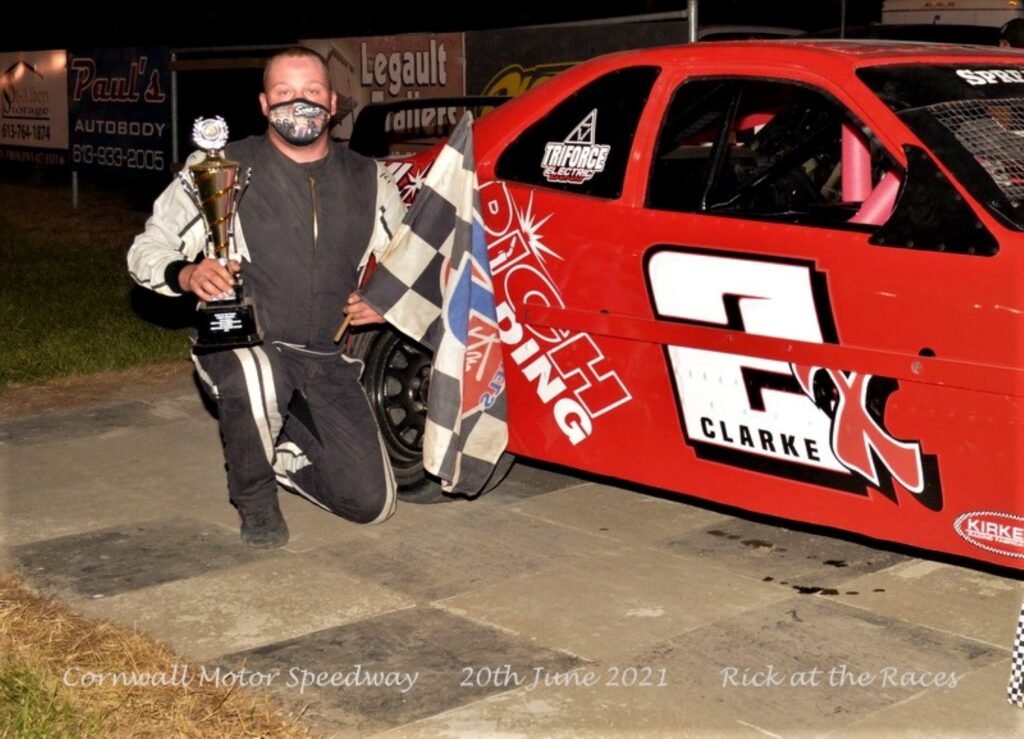 This provided another win for James Clarke