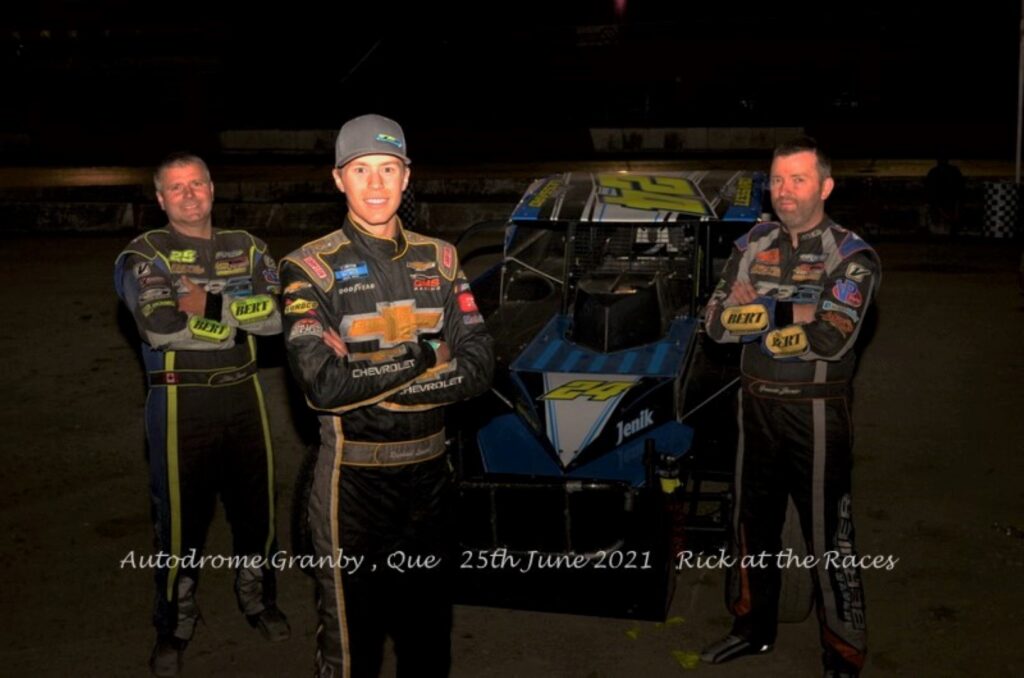 As we gradually pull out of the COVID  nightmare and things start moving  in a direction of  some kind of  ‘normal’ , Autodrome Granby in Quebec had a two day event scheduled for this past weekend.

My plans were to attend both days of racing , as well as visit a new track for the first time.

Before I continue about the Quebec weekend, I must mention my local track , the Mohawk International Raceway in Hogansburg, New York.

Although it’s only a mile from my house I’ve been unable to go there because of COVID border restrictions. They had a special race on Thursday night  (24th June) , so I had to be content with listening to the race cars from my front porch.

I was kept up to date by my friend Kyle Coryea who is helping out at the track with photos. Tim Fuller won the Modified race and Zach Arquett was the Sportsman winner. 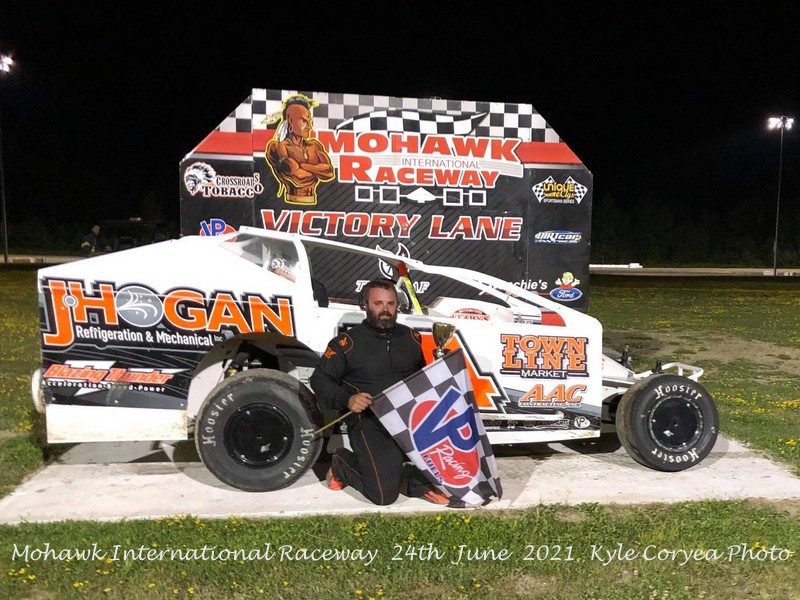 Thanks to Kyle Coryea for the shot of Zach .

Now back to Quebec racing,

Don Simpson arrived at my place around lunchtime on Friday , and we traveled up to Granby in my Impala.

We booked into the Bon Soir Motel , just a few miles from the track.

On arrival I had my usual wander around the pits and noticed my friend Mathieu Boisvert who was sporting his ‘Habs’ shirt of Toffoli  # 73 , the same number as his Modified. 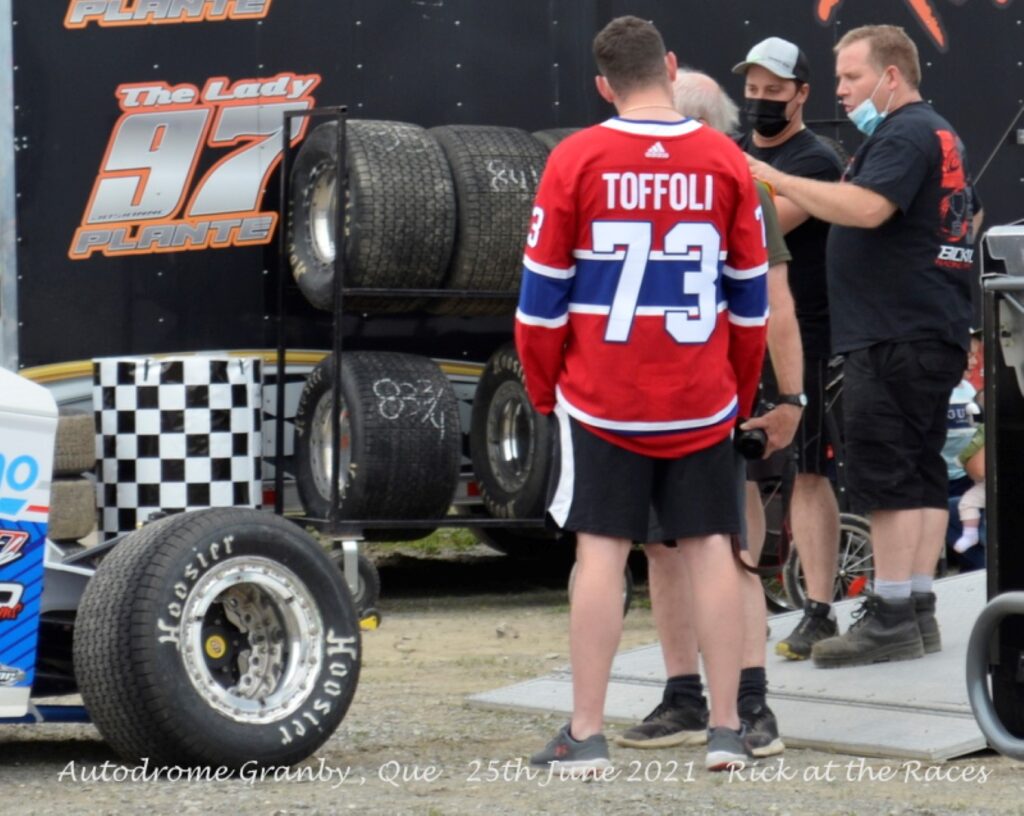 Just a few days earlier The Montreal Canadiens eliminated  the Vegas Golden Knights to advance to the Finals of the Stanley Cup,

Parked next to Mathieu was Chris Raabe who had journeyed  up from Alexandria , Ontario for a rare visit. 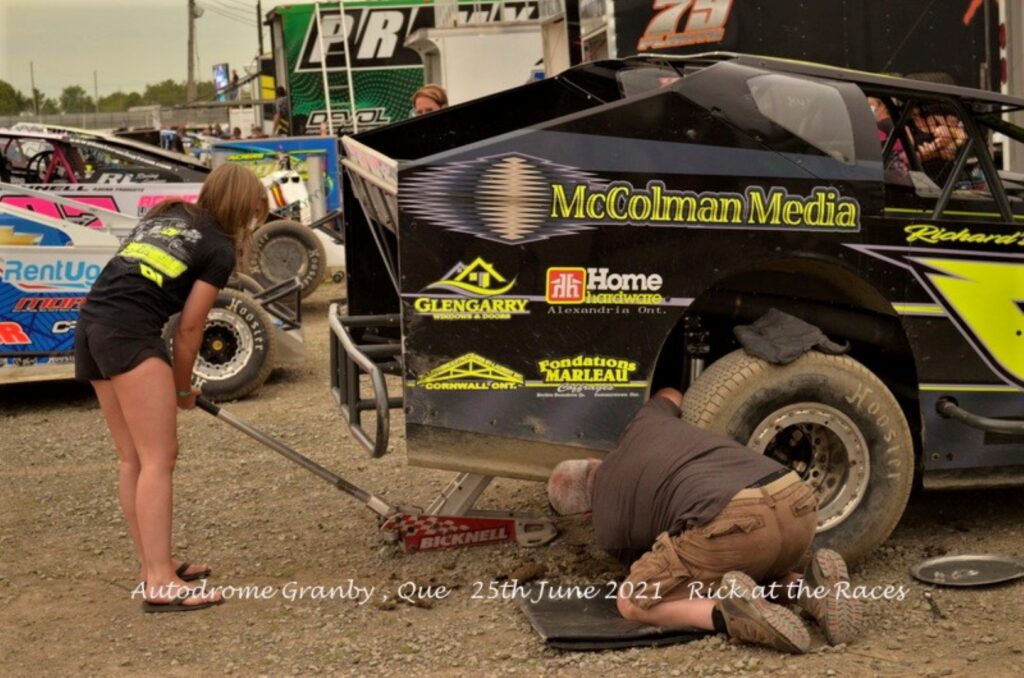 Another of my locals in attendance , was Luke Whitteker  # 124 from Iroquois, Ont driving the new Pierre Daganais owned car. 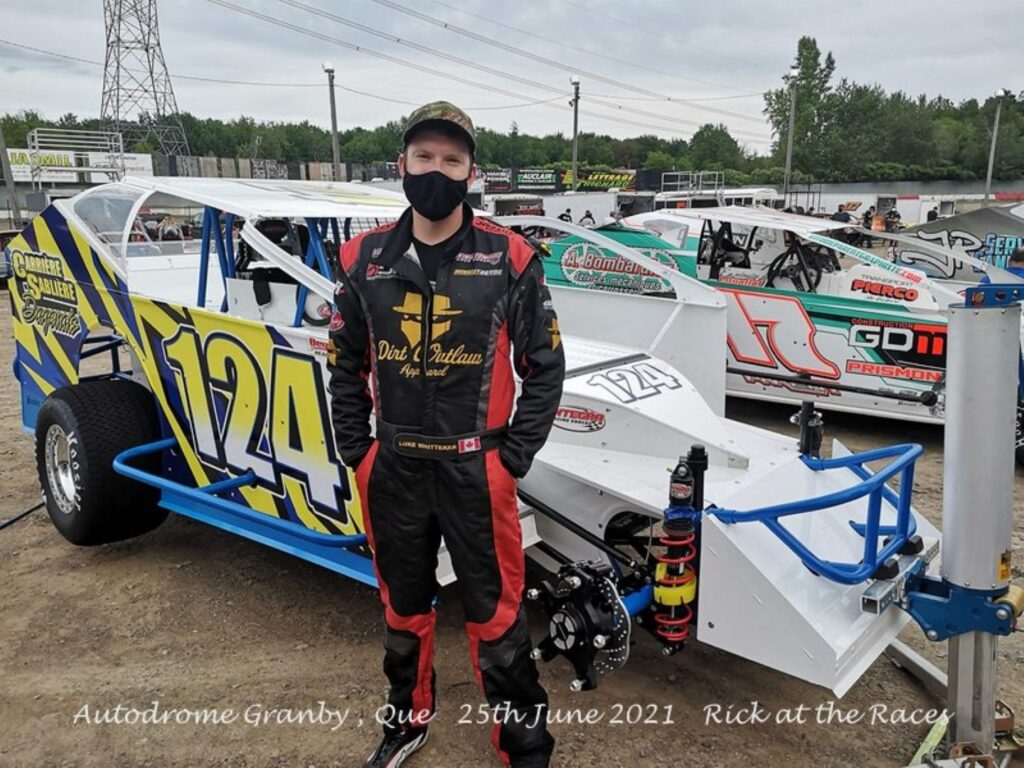 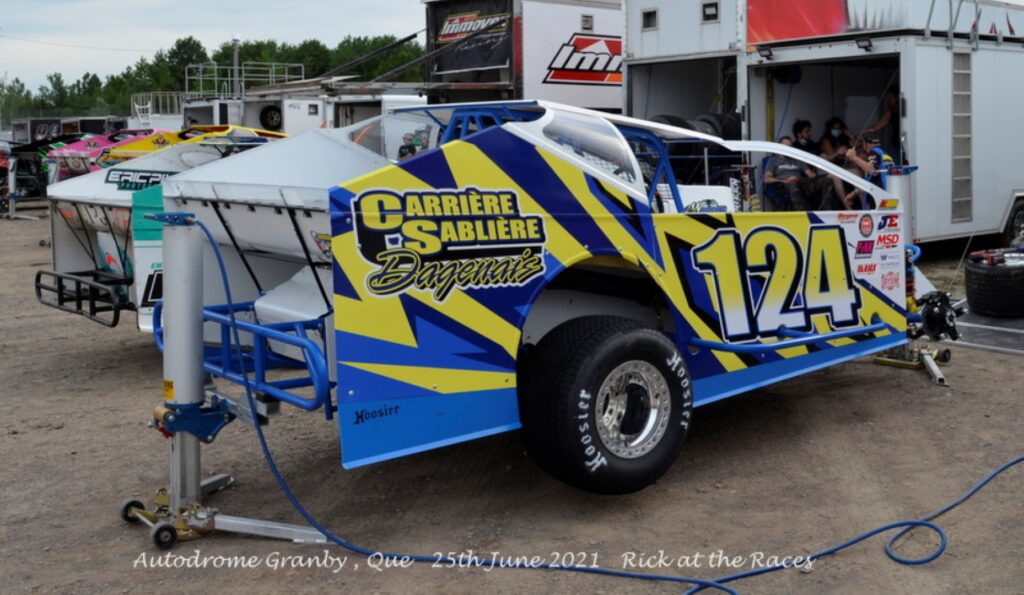 The big talking point and exciting news for Quebecers was the appearance of NASCAR Truck Series driver Raphael Lessard # 24, who  would be behind the wheel of one of the TBR Racing team Modifieds. 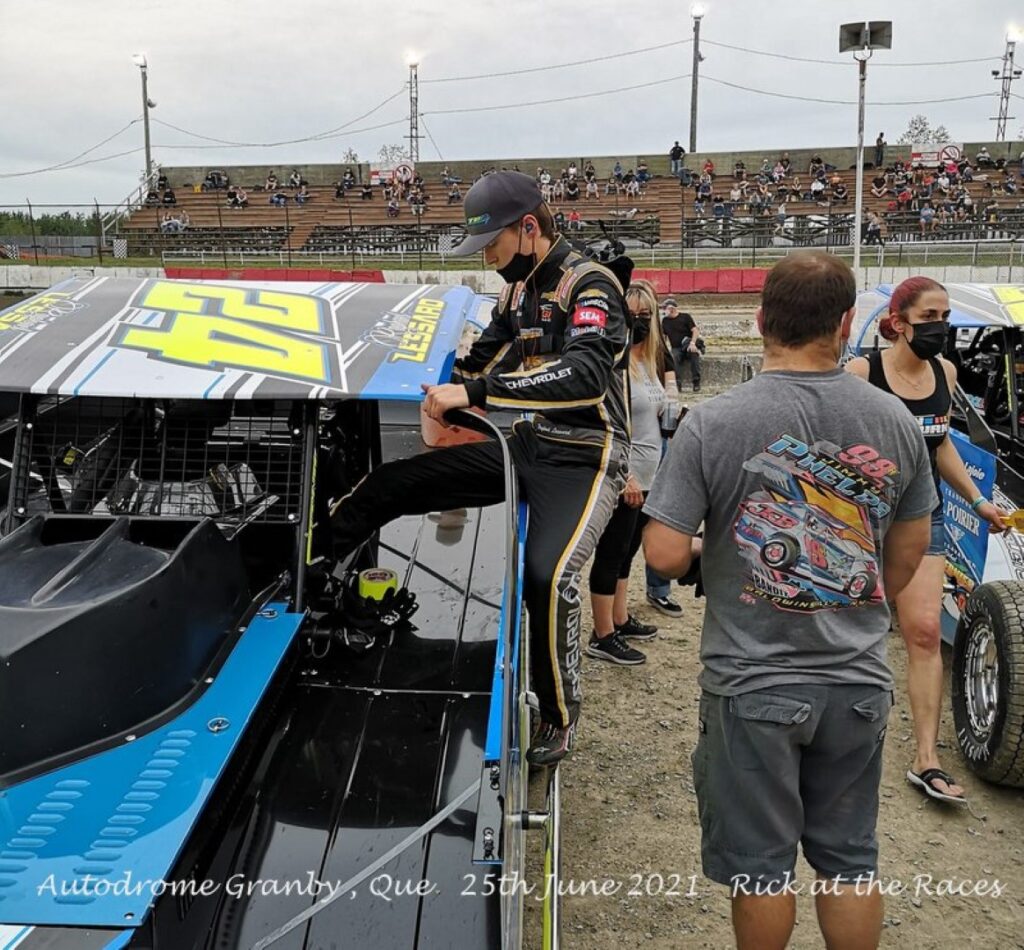 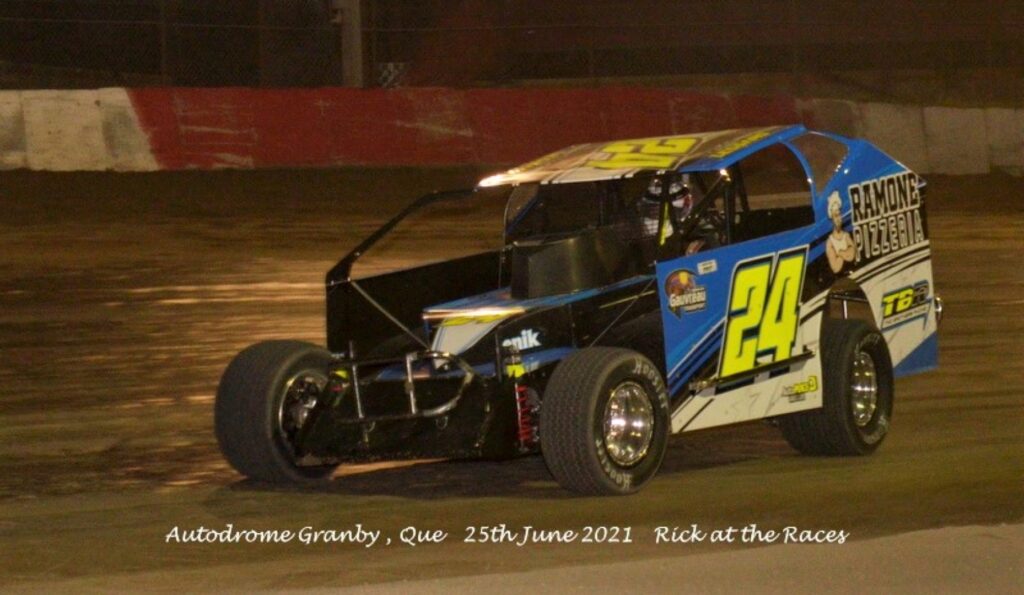 The initials TBR stand for Two Brothers Racing, who of course are our good friends Steve and Francois Bernier.

We had known of this media coup for a few weeks, and Don had been to the mid week test day.

As for the evenings races, the Sport Compact (4 cyl Mini Stocks) were the first Feature,  which seemed to go on for an eternity . (Too many laps for this division on such a big track in my opinion) . 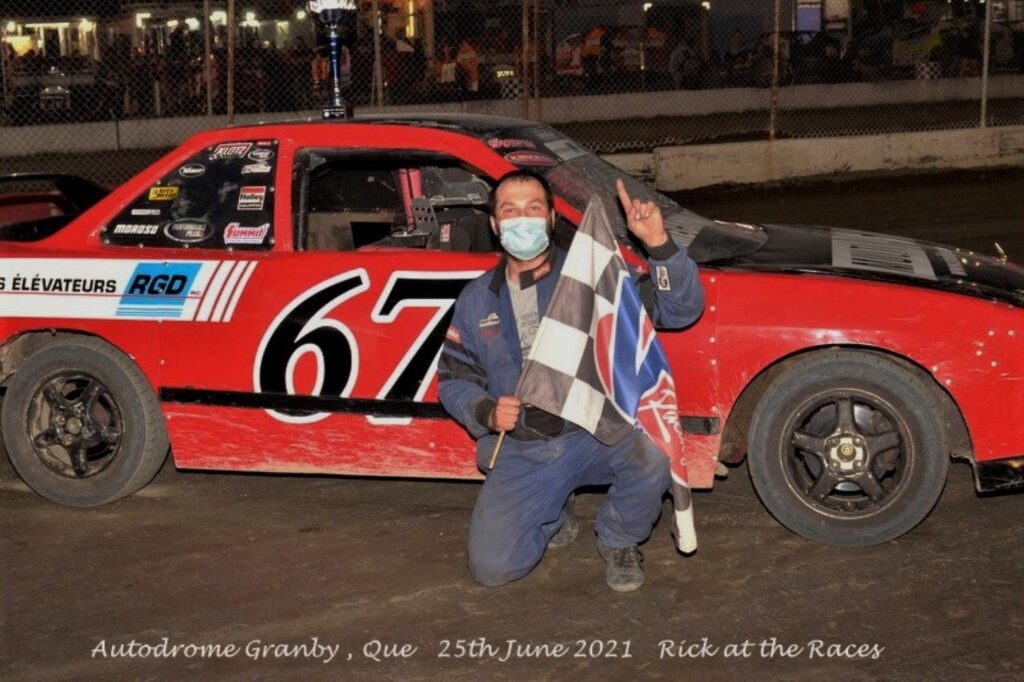 The winner was Jeremie Goyette # 67  (I like that number) 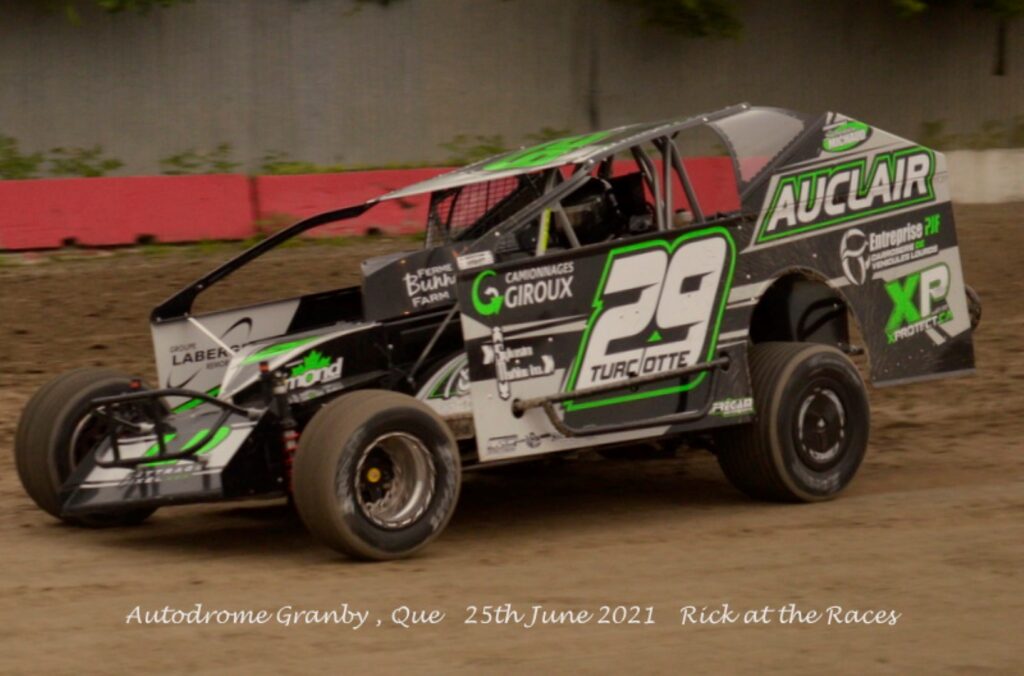 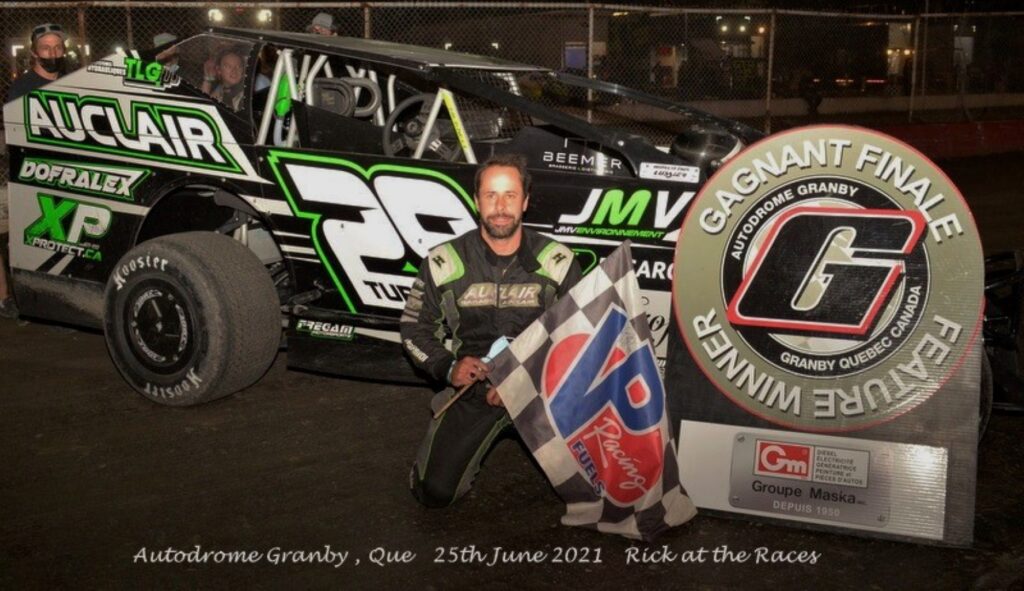 Next up was the Sportsman Feature where Steve Turcotte  # 29 got the Victory. 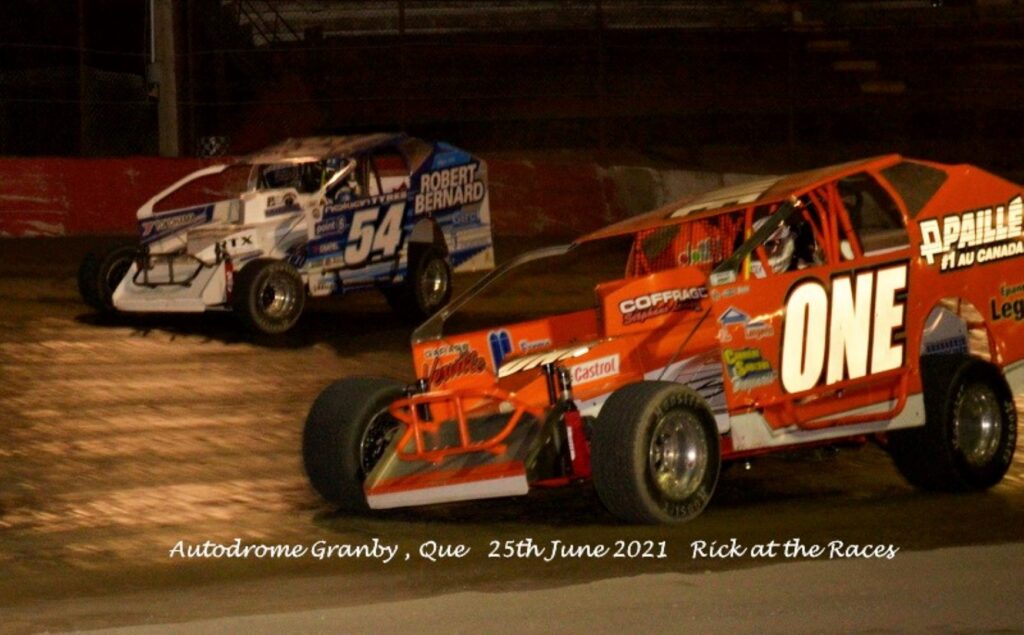 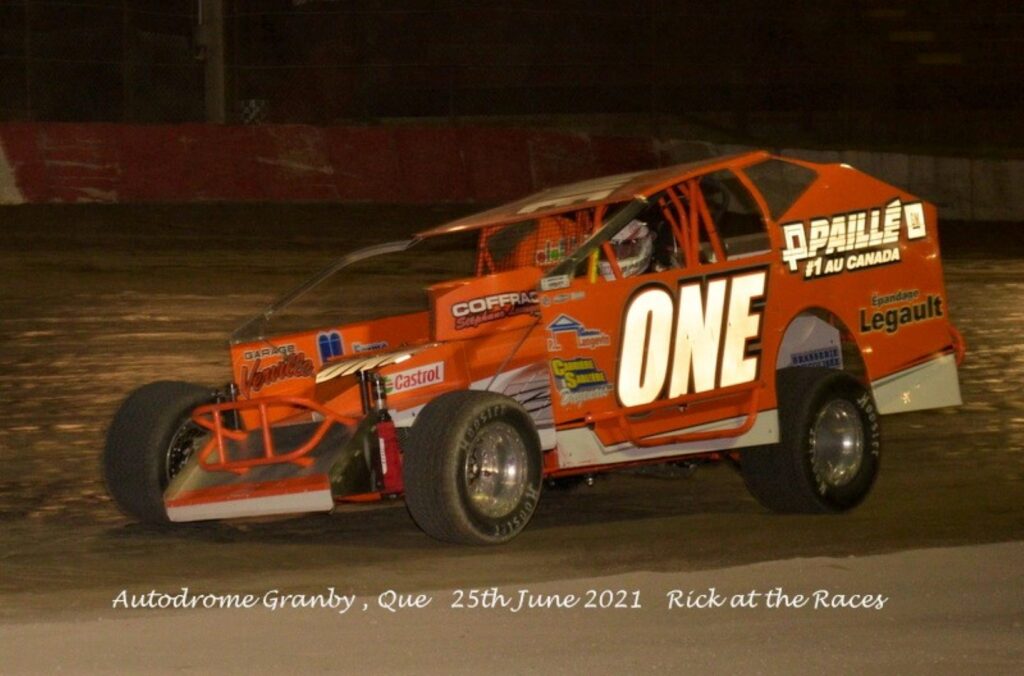 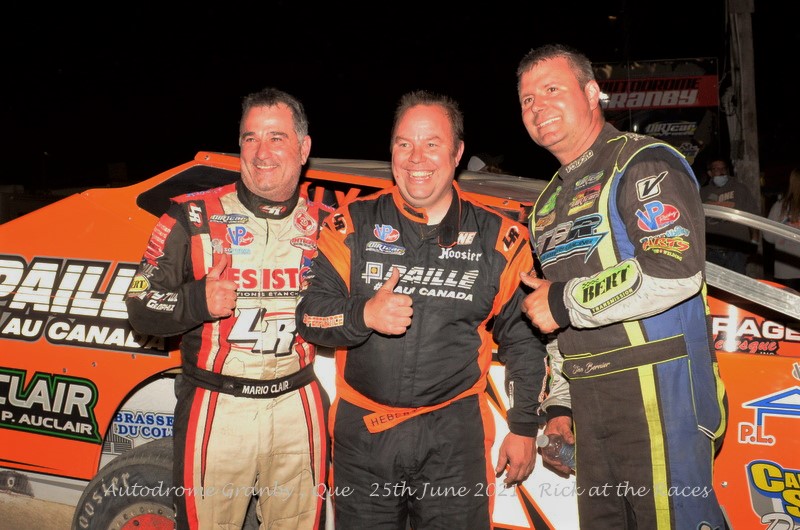 Time was now getting on by the time the Modifieds were on track for their Feature.

It turned out to be a good one, with David Hebert holding off challenges from Steve Bernard, Mario Clair and Steve Bernier to take the checkers.

There is a 11-00 pm curfew at Granby and when the Pro Stocks took the green for the last feature of the night, it was 10-45.

They had just 15 minutes before the race would have to end. A front straight wreck happened at 11-00 pm so the yellow flag and  checkered flag were dropped at the same time. 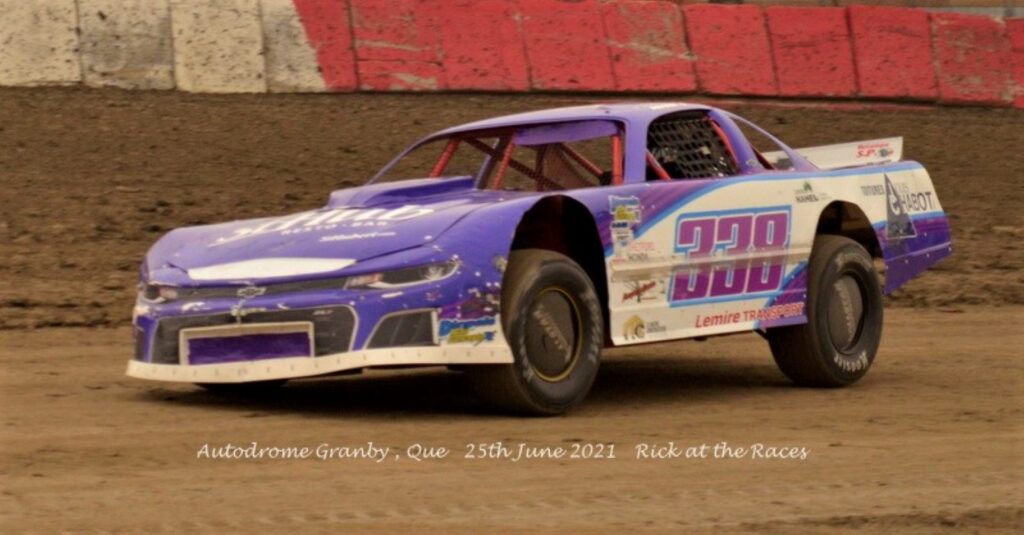 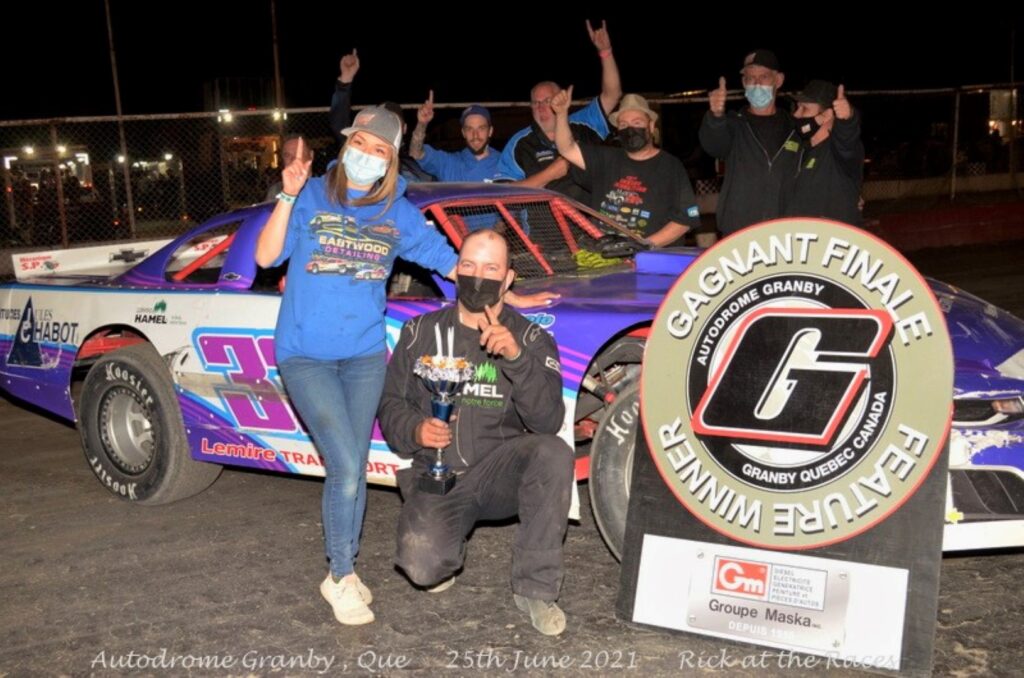 This gave the win to Pascal Payeur  .

That concluded the first nights racing.

Our plans for the next day , were to visit the Autodrome Thetford in the afternoon before the second night of racing at Granby.

The weather forecast had been bad for the whole weekend and during the night I had confirmation that Thetford had been cancelled. 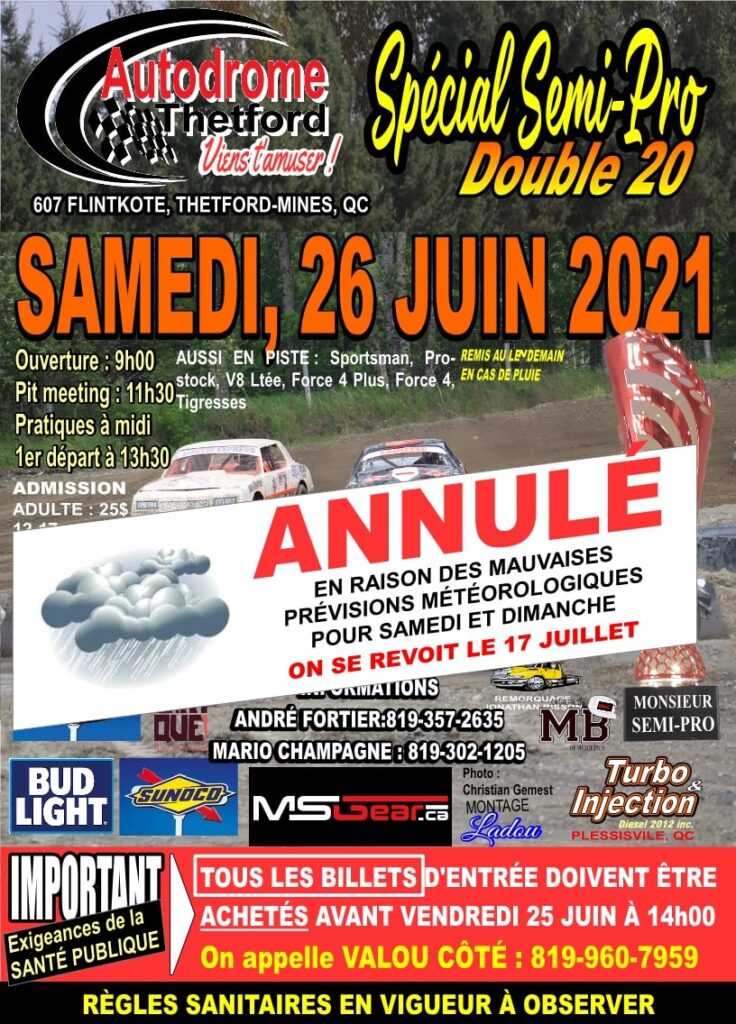 That was very disappointing , as I’d been looking forward to adding a new track to my TRACKCHASING LIST . 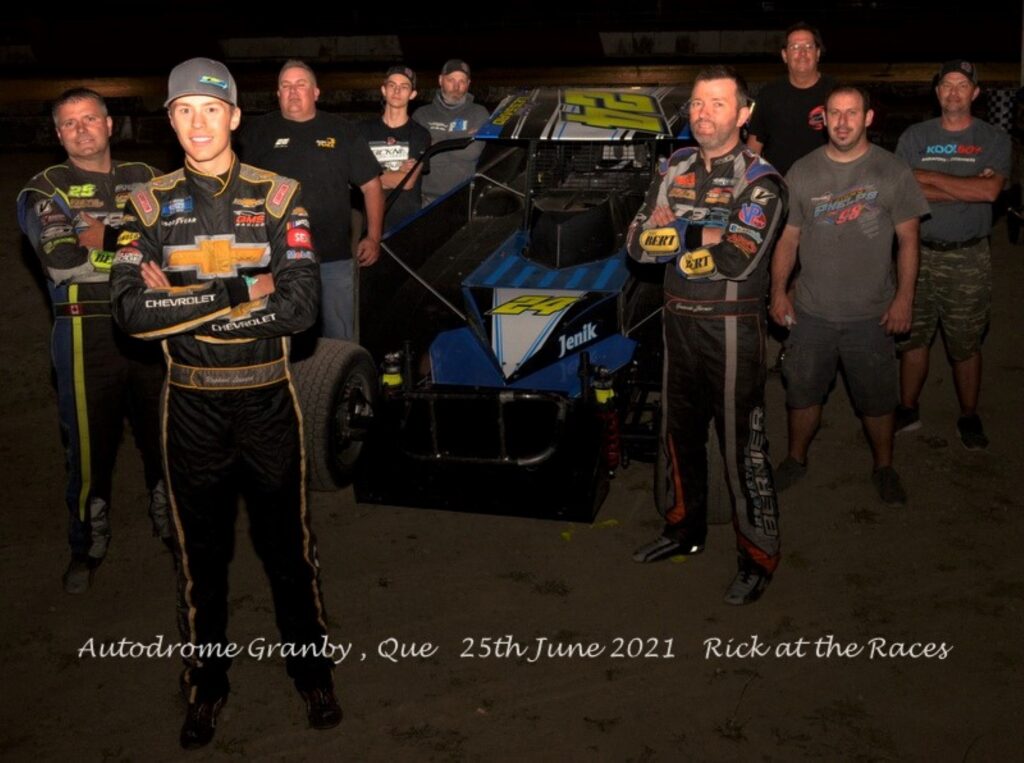 So after some socializing in the pits we returned to the Motel to await the mornings decisions .

It was pouring down with rain the next day , and sure enough , by 9-30 am we had heard the call , that Granby’s second night of racing was off.

So, it was a slow ride back to Ontario via Montreal in heavy rain.

I couldn’t resist popping into a store in the city to buy some quality 1/43 scale diecasts. 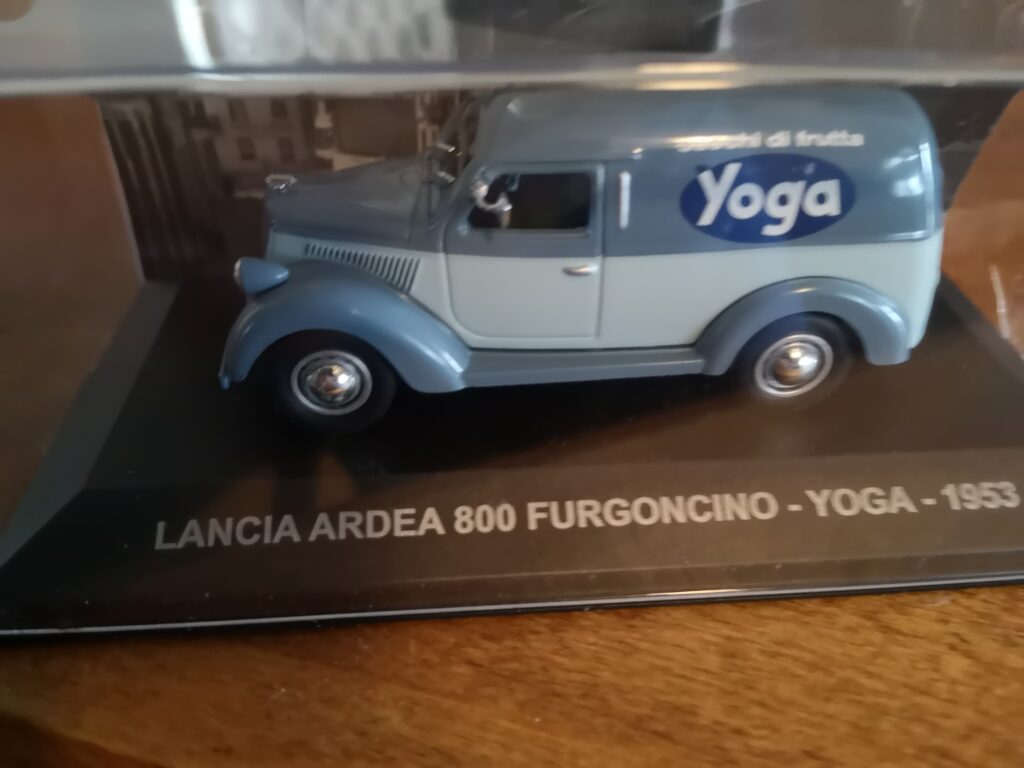 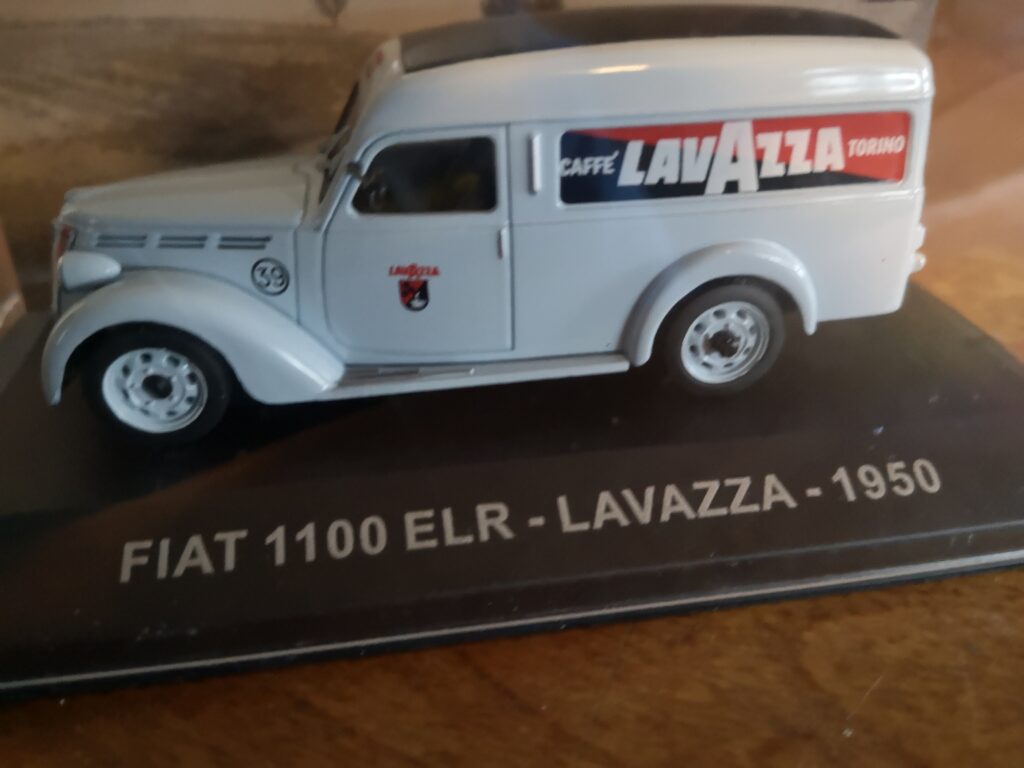 One was a SAVA J4 van , which is the Spanish badge given to the Austin/Morris J4. I drove plenty of them when I was teenager, in one of my first jobs.

Not all of Saturday nights racing in my area fell to the rain. The Airborne Speedway at Plattsburgh survived and once again my good friend Kyle Coryea was on hand to keep me up to date. 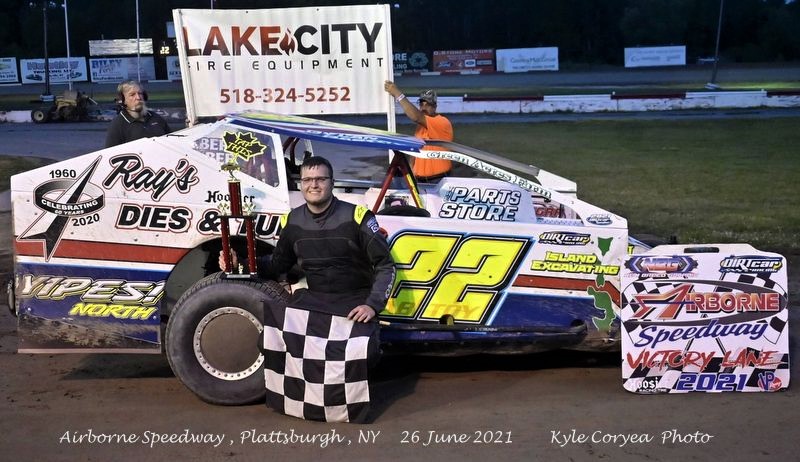 Thanks again Kyle for the shot.