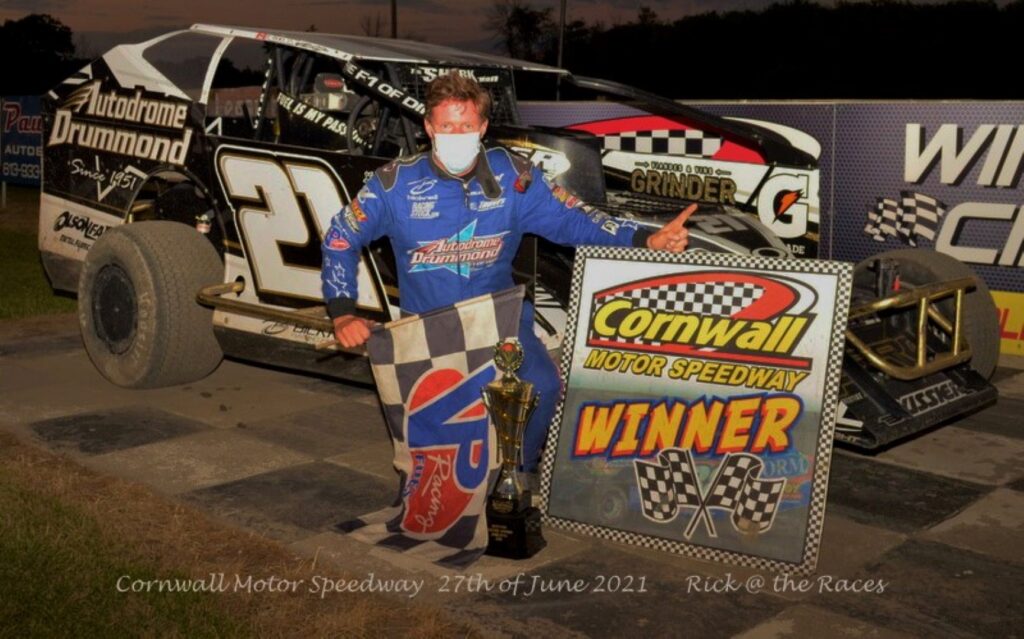 After getting rained out in Quebec on Saturday, I was keeping my fingers crossed , the rain would miss my area on Sunday .

My local Cornwall Motor Speedway was running a regular show, but the weather forecast didn’t look good. Thunderstorms and rain were predicted throughout the day.  It was a game of wait and see.

My  day started with a 9-00 am appointment on the couch eating breakfast and watching the live TV coverage of the Austrian Grand Prix .

After some great racing at the start of the season, this sadly was another un eventful (dare I say , boring) one.  Just a few weeks ago, the Monaco and French races, suffered the same fate and were unexpectedly dull.  In Sundays race, Max Verstappen had an unchallenged ‘road trip’ to the checkers in the Red Bull.

Meanwhile , in Cornwall , Ontario, the  rain had stayed away , and it turned out to be a hot and humid day.

I set up my camera equipment and chatted in the pits until start time.

One of the people I chatted with was Gary McColman and his son Tim,  a  Sportsman racer.  I’ve known Gary , a radio show host in Kingston for a long time. He has been a sponsor of Chris Raabe, since the start of his career. 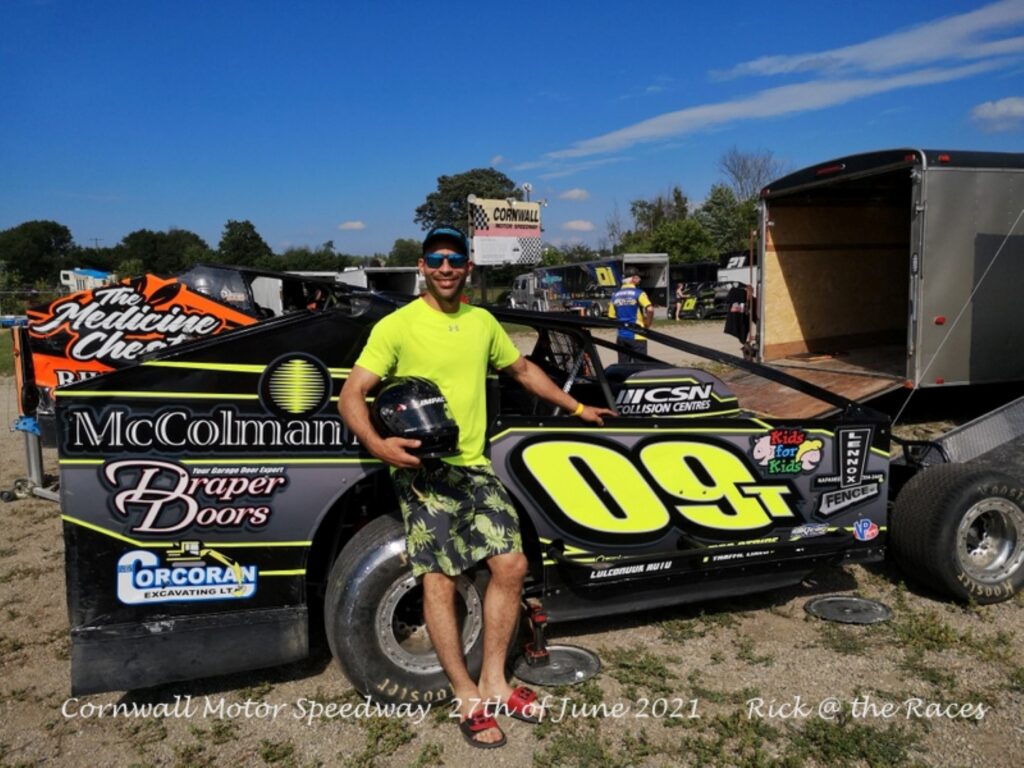 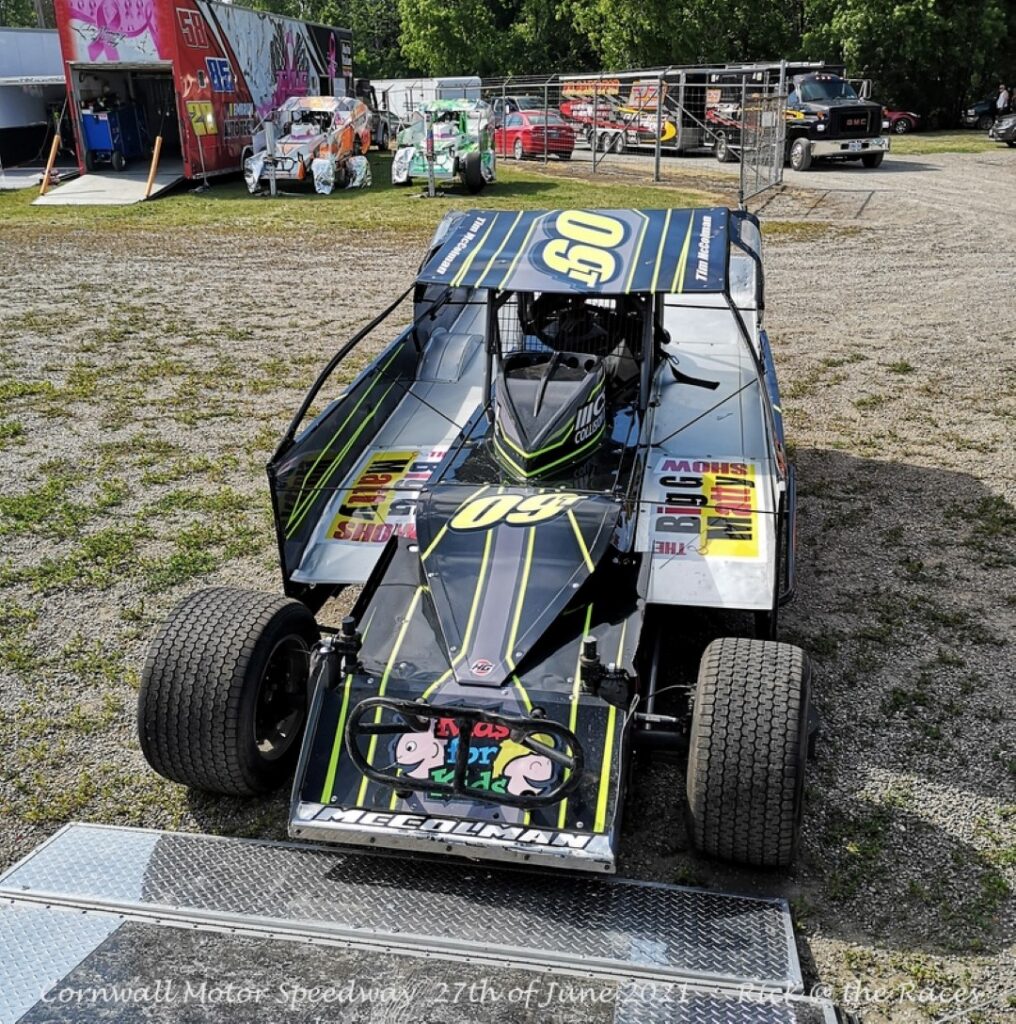 Tim started racing Vintage Modifieds a couple of years ago, and for 2021  has gone up into Sportsman. 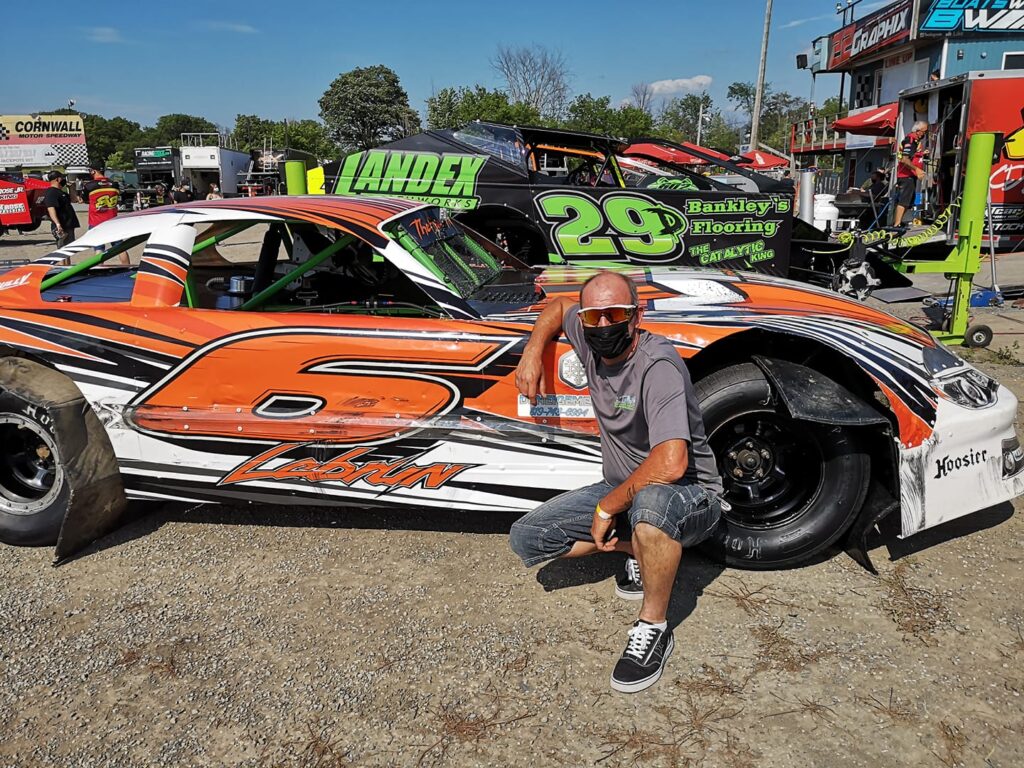 I also chatted with Stephane Lebrun who was there with his Pro Stock, hoping to add another track championship to his resume.

There were no track drainage issues this week and racing got underway at the scheduled time.  I took a few pics from the pit tower then moved to the middle for the heats. 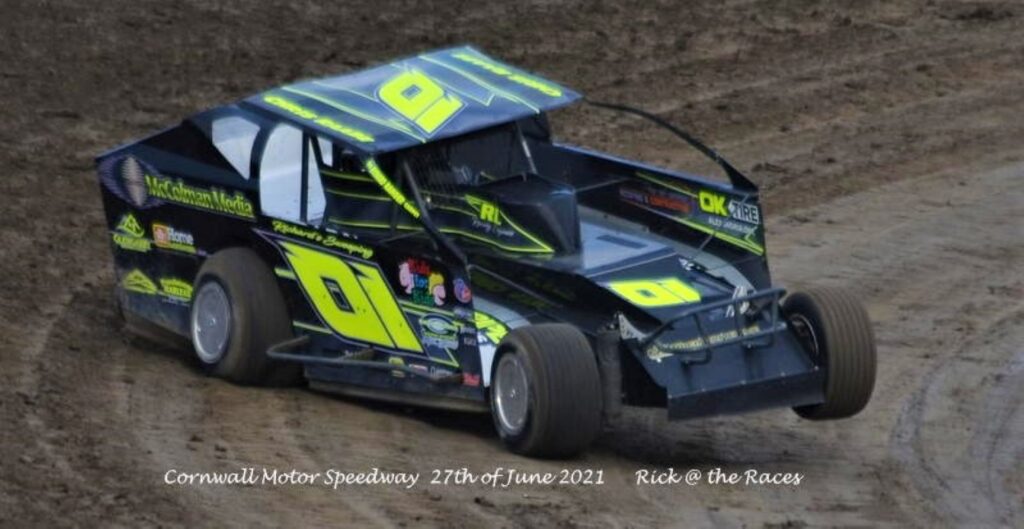 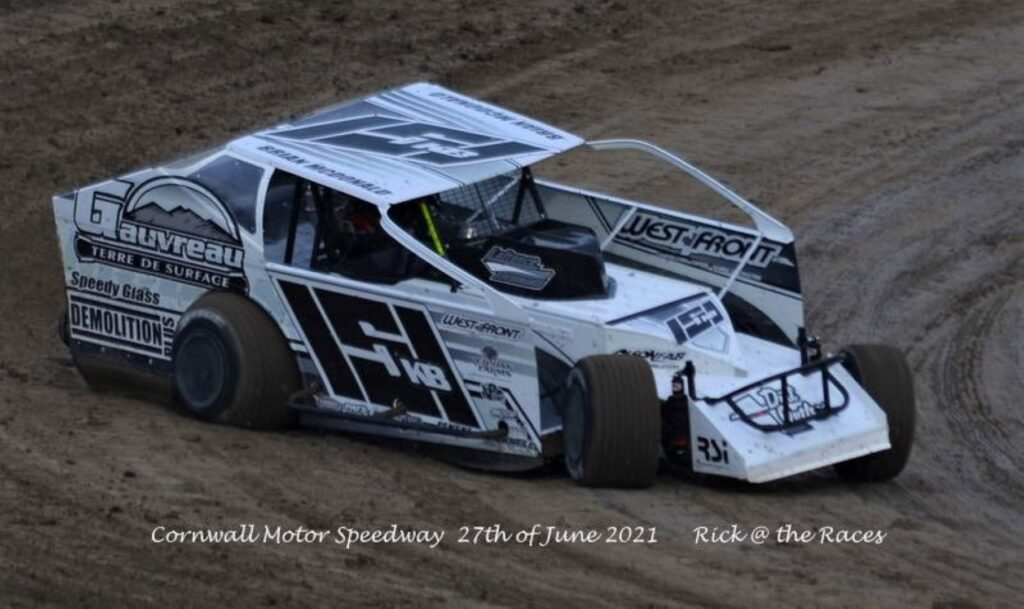 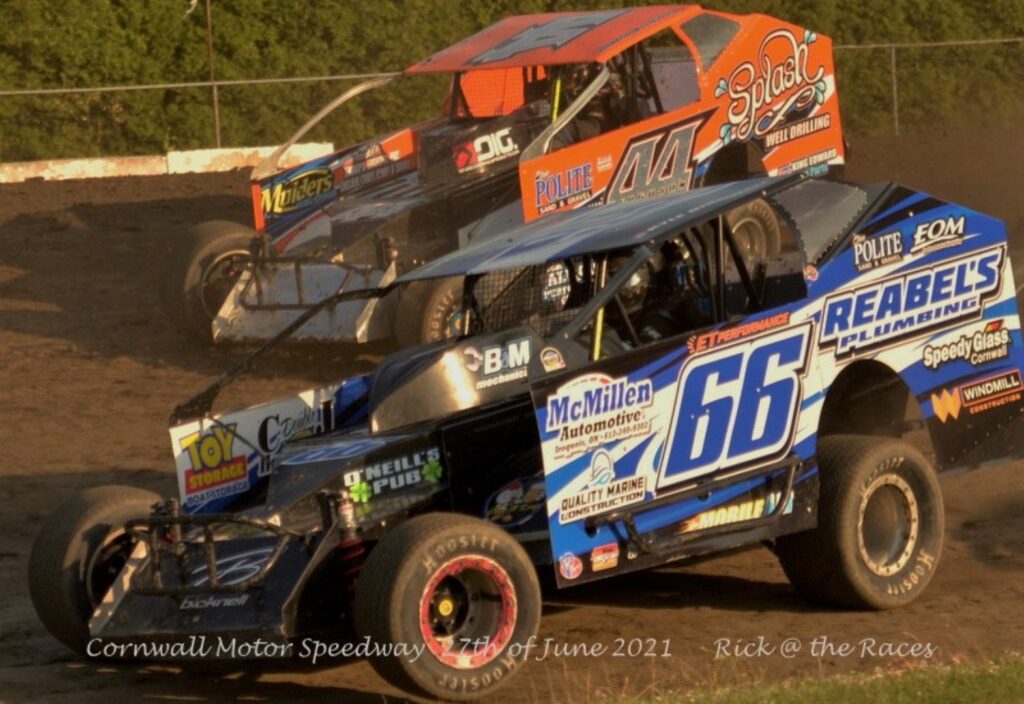 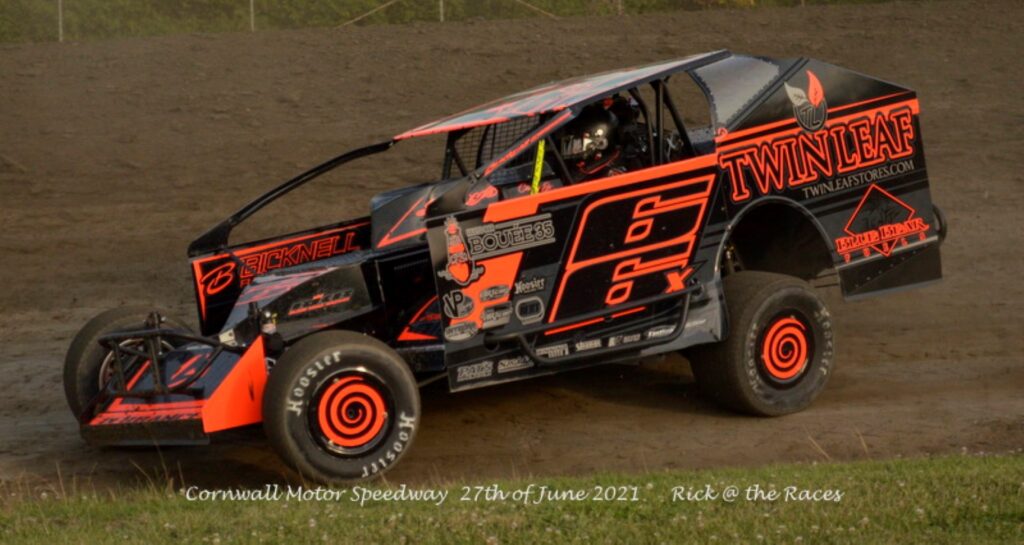 First of the feature races, was as per normal,  run prior to the intermission. 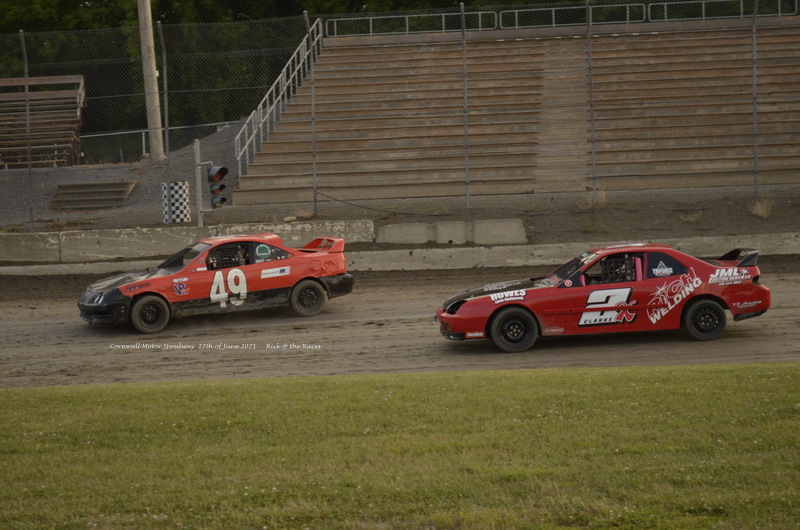 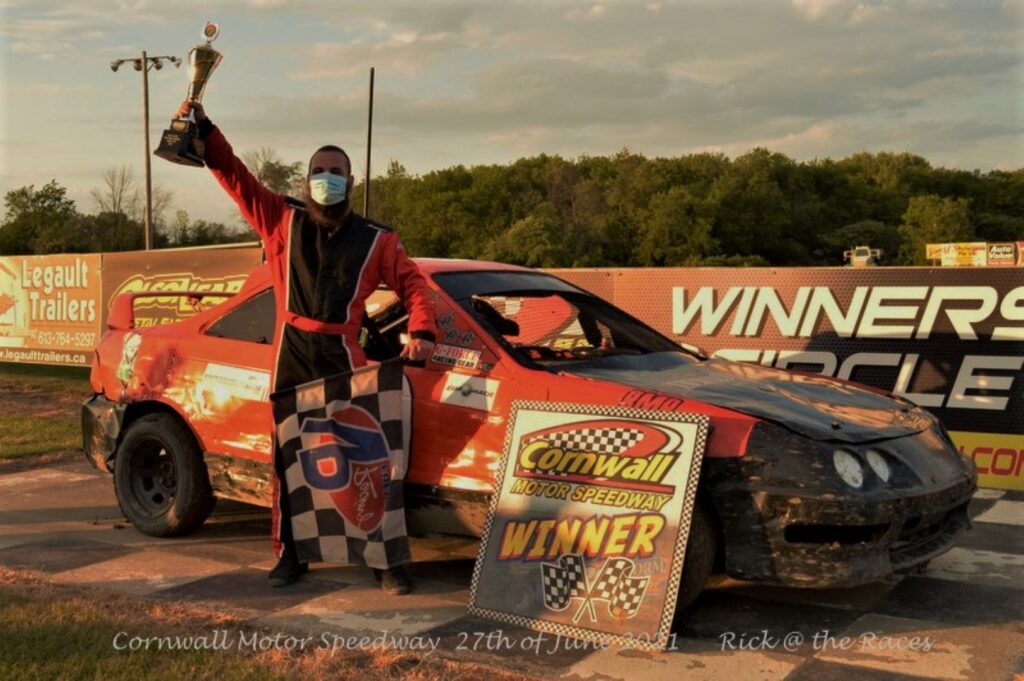 It  was won by Alexis Charbonneau after a race long battle with James Clarke.

Things had moved along swiftly and after a short intermission for track prep, we moved on to the Pro Stock Feature feature.

For the first part of the race we had a good battle between Dave Seguin, Marc Lalonde, Stephane Lebrun and Bruno Richard, 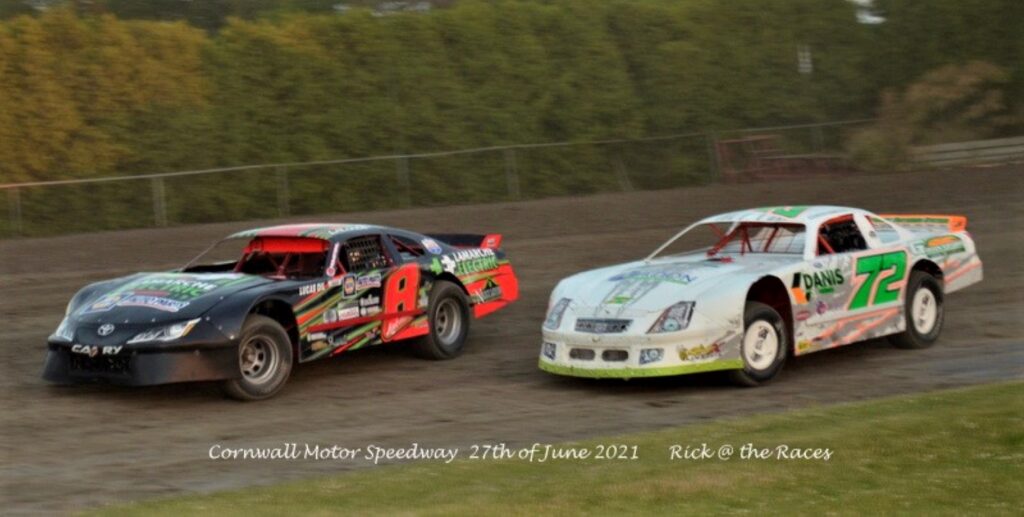 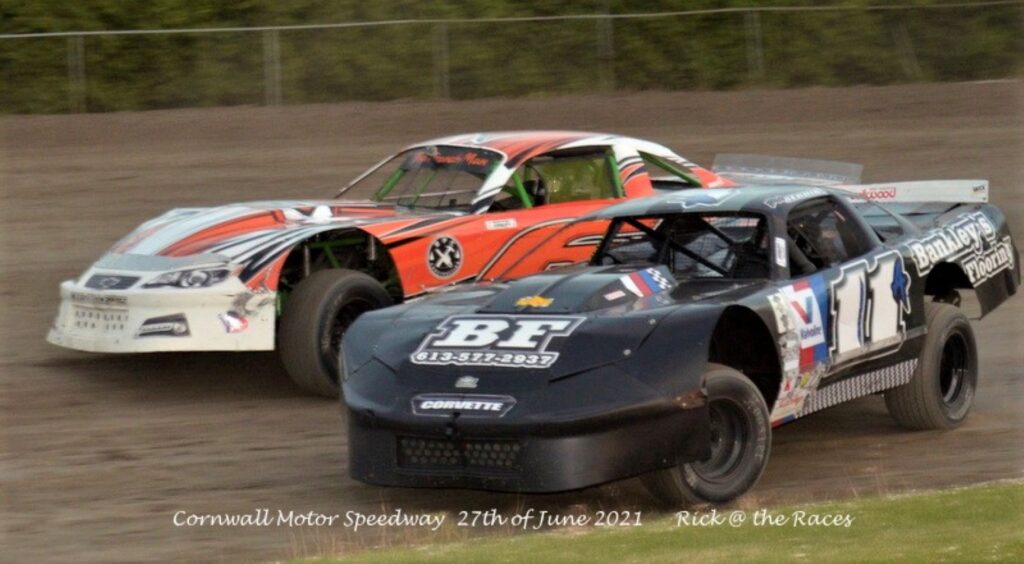 Lalonde and Richard came together and needed quick repairs in the pits, which left Seguin to charge to the flag. 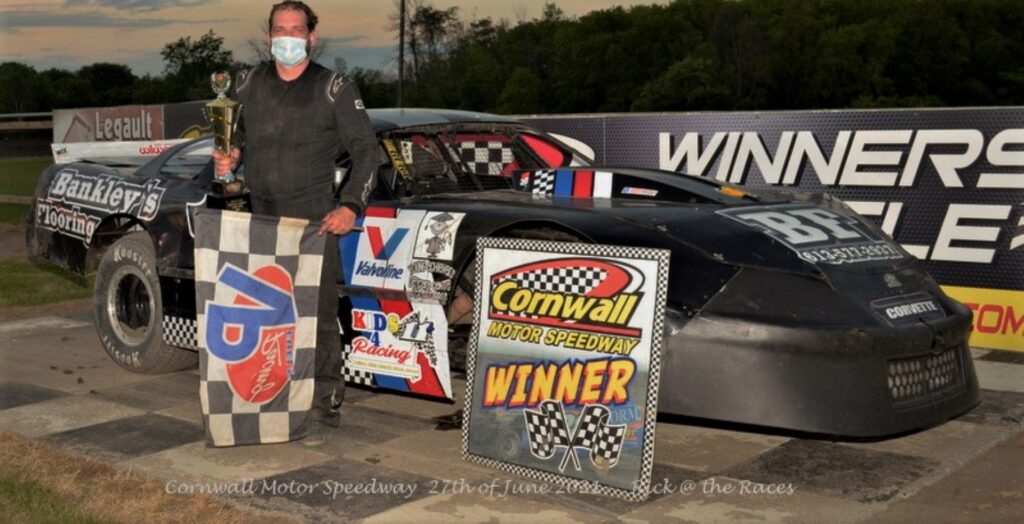 The Modifieds were up next .  There was just one caution in this one,  after Lee Ladouceurs car caught fire.

Lee was OK and got the car off the track . 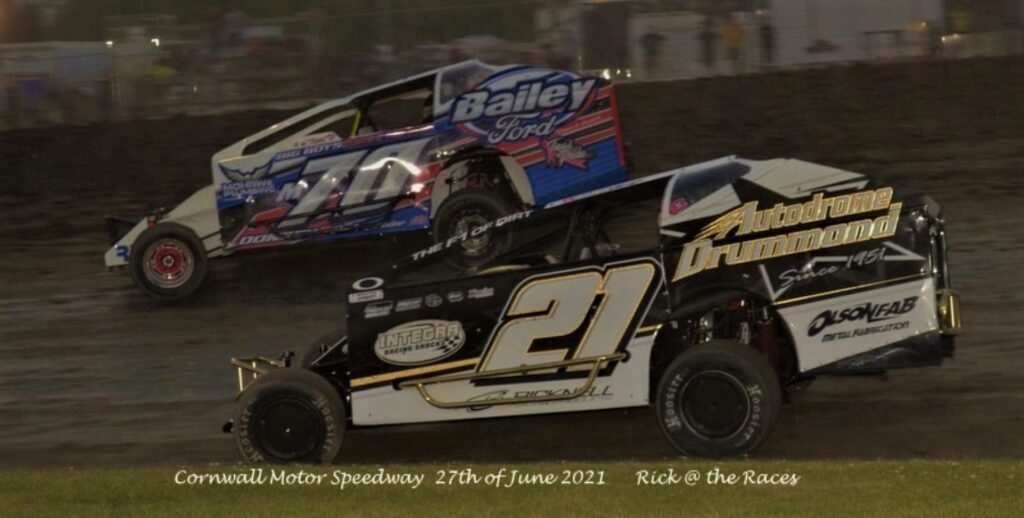 Racing continued with Yan Bussiere dominating things all the way to the checkers. 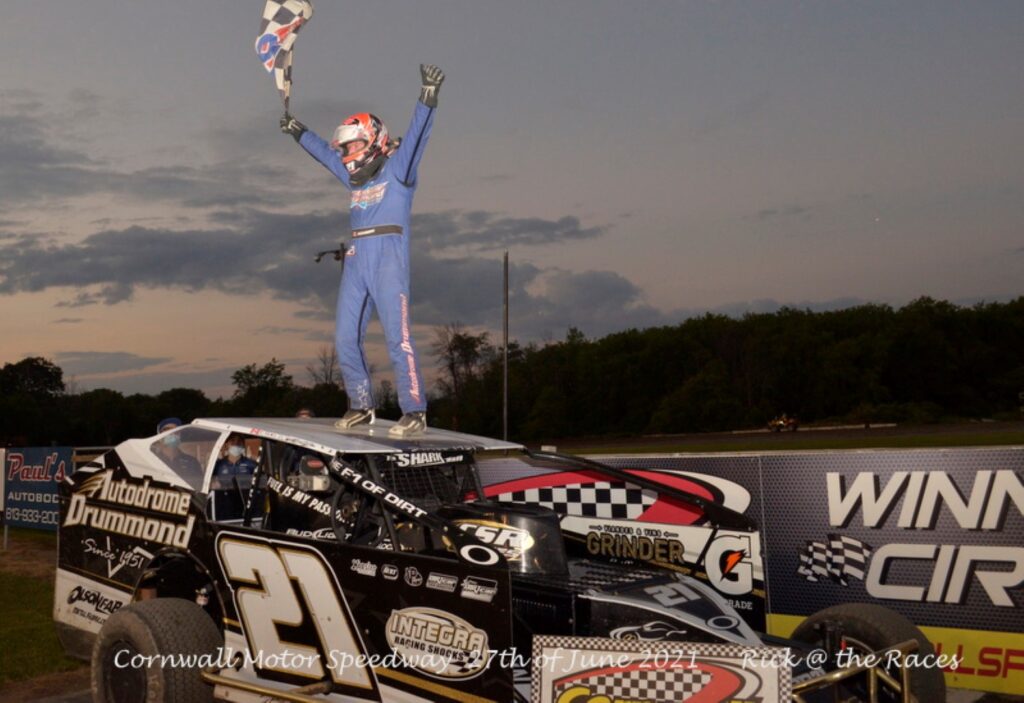 There had been no major delays, and we were doing good on time , when the Sportsman took to the track. 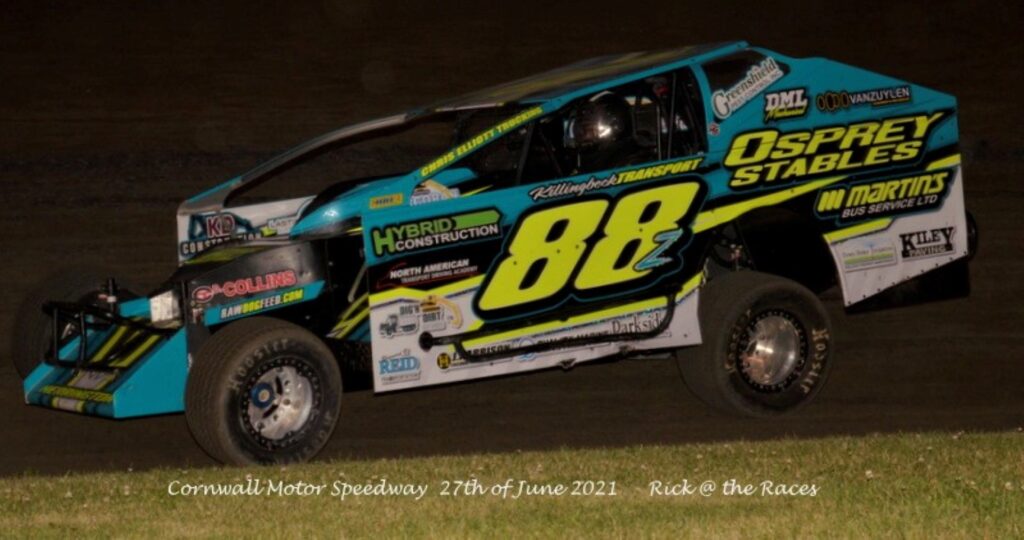 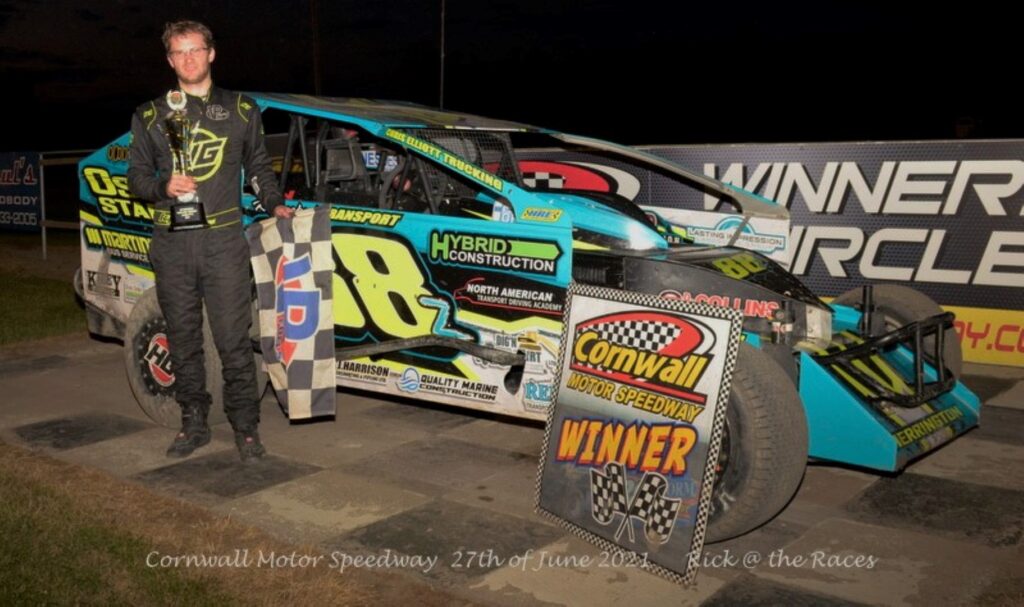 Once again there were very few stoppages as former Modified  driver Bobby Herrington took the win. He is currently driving the Dan Dawdy owned 88z car.

As you’d expect, the final race of the night, the 15 lap Rookie Sportsman feature had a number of stoppages. 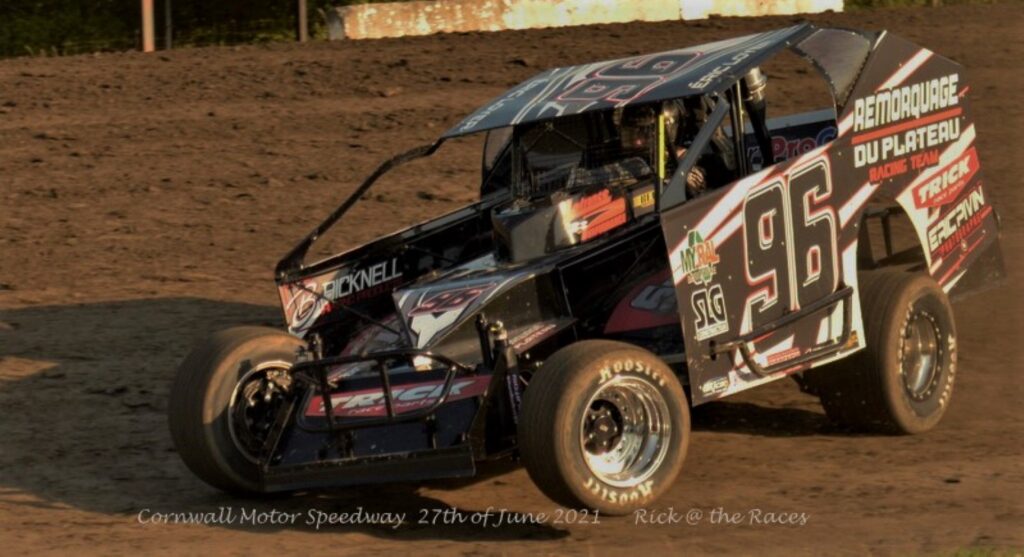 Eric Loyer and Tristan Ladouceur battled it out up at the front , with Loyer getting the win.

Even with the Rookie race stoppages, the full program was all over by 9-45 pm.

Perfect for me , I think everyone else  was happy with that. 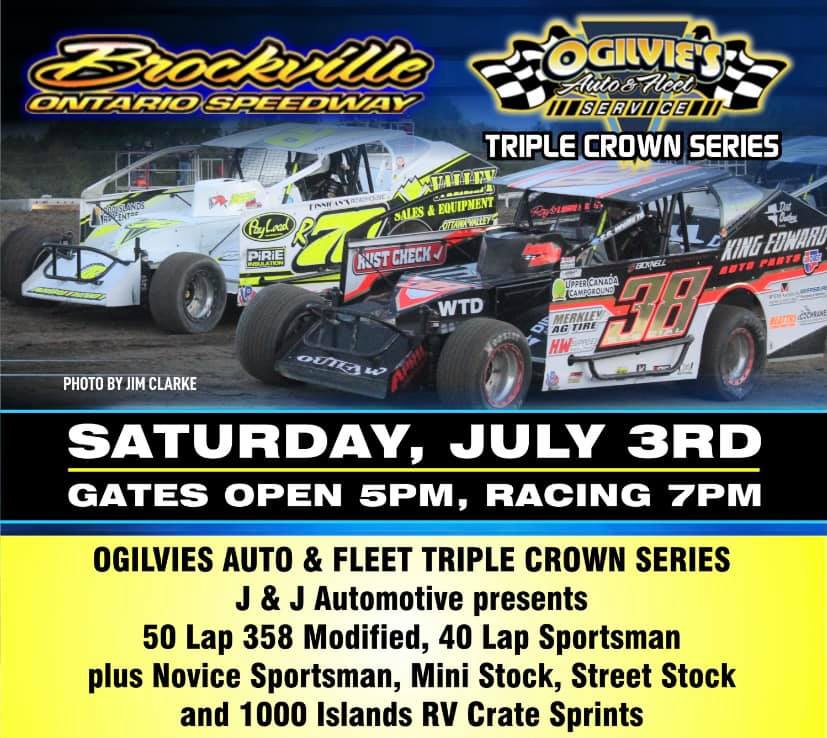 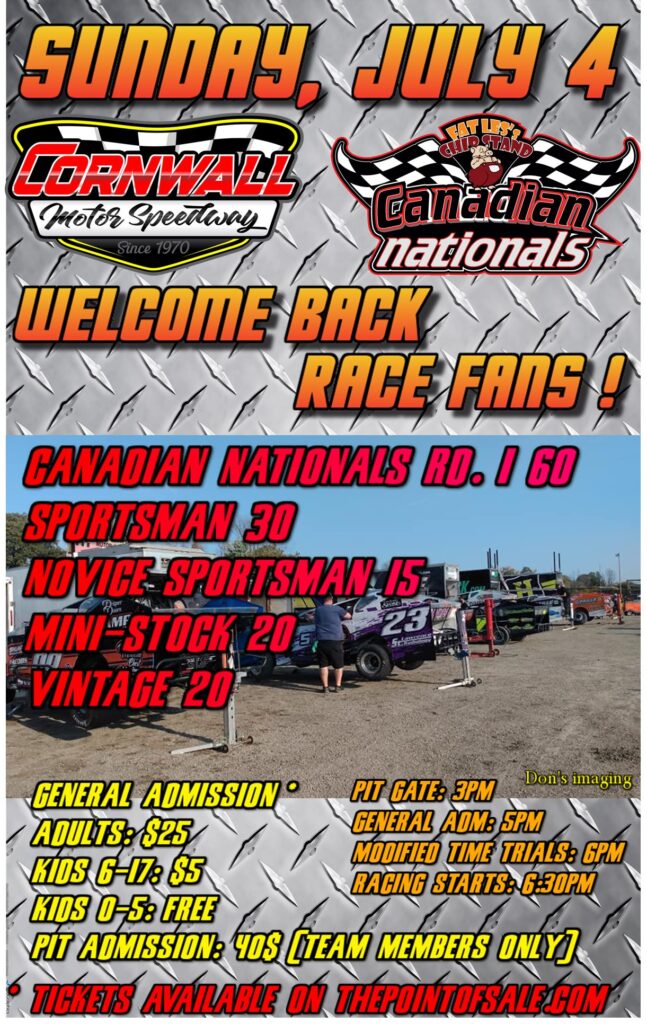 Next weekend I have Brockville and Cornwall to look forward to.