Friday started off , ‘business as usual’ with a trip to Autodrome Granby with my photographer buddy Don Simpson.

As normal we arrived at the pit gate in good time to see the teams arriving.

Once again the Bruno Cyr Team were the minders for our camera bags as we wandered the pits to do our thing. 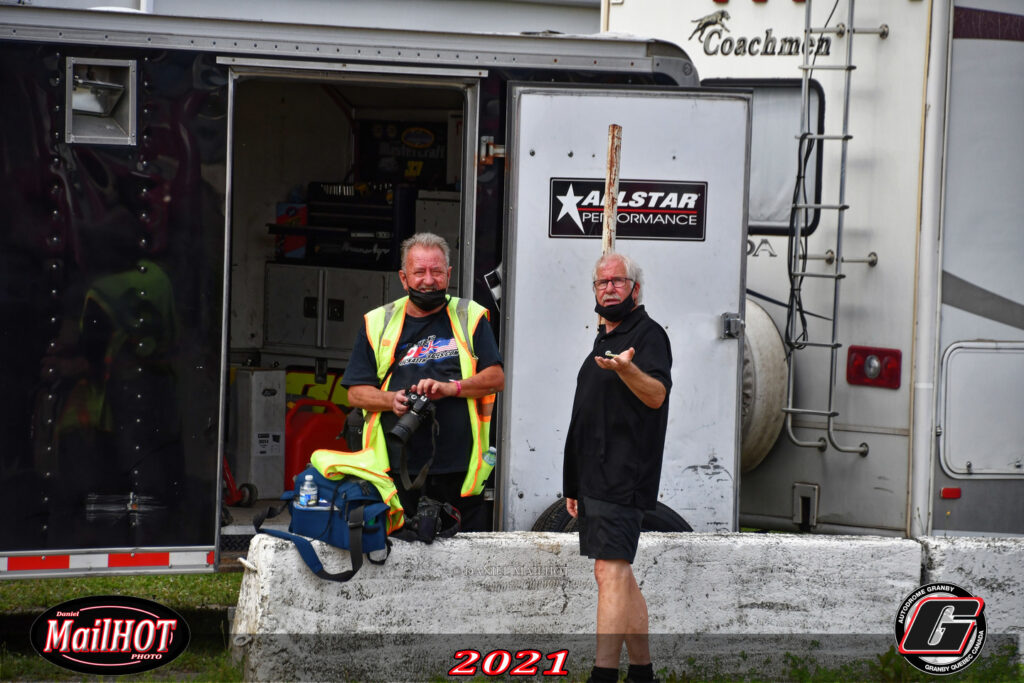 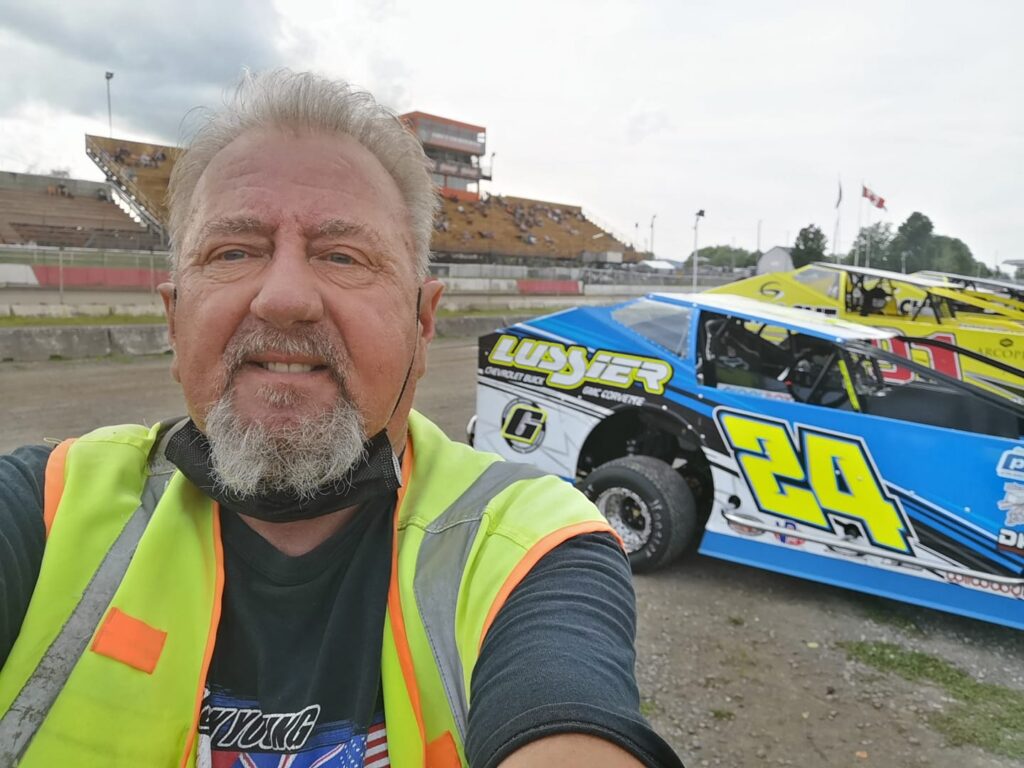 His car was one of the first to arrive.

For hot laps, I took a few pictures on the out side of turn four.

For the heat races I went to my usual spot on the inside of  turn one and two. 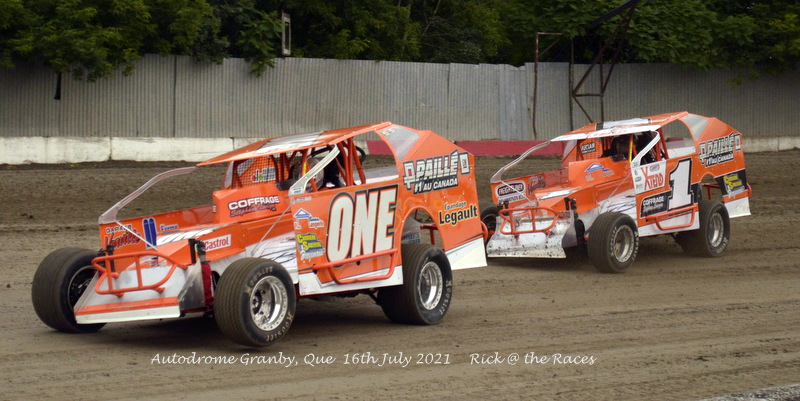 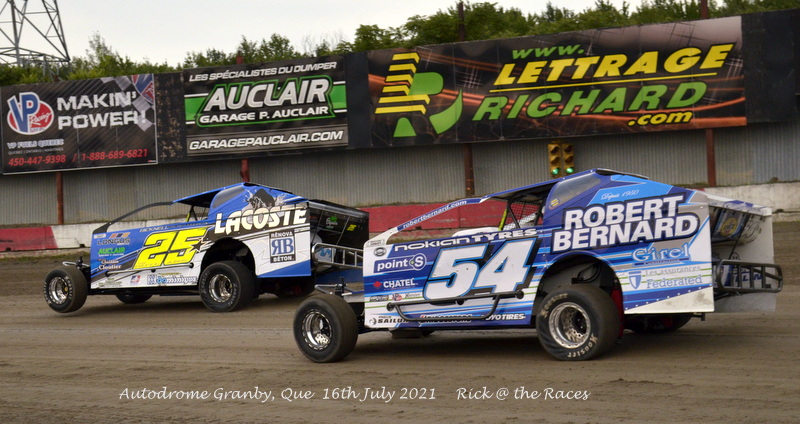 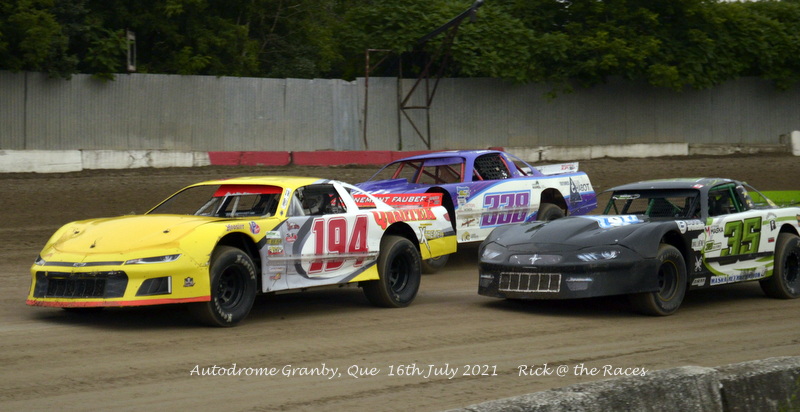 First of the features , was for the Sport Compact. 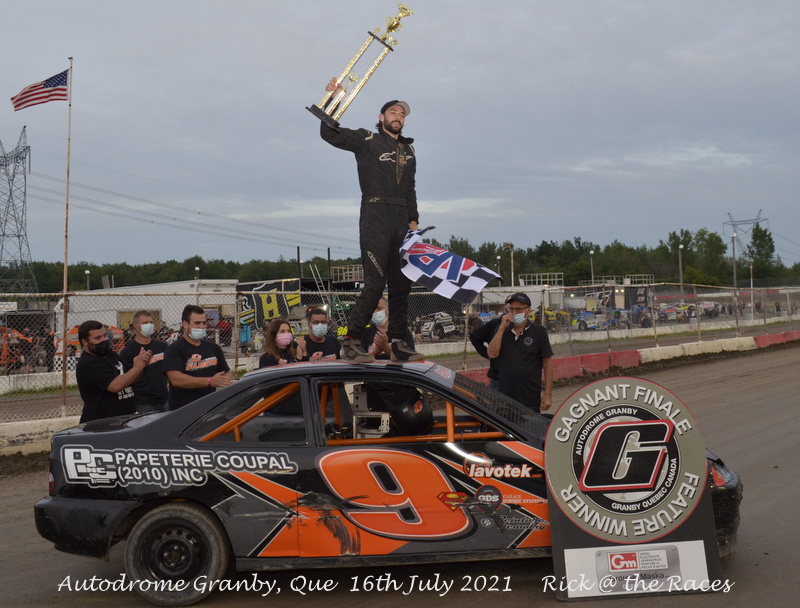 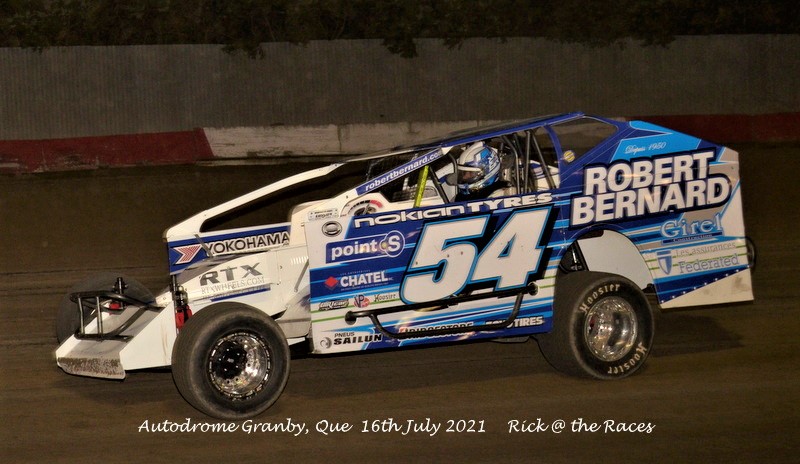 The Modified Feature followed this, where once again Steve Bernier took the checkers after fending off a hard challenge from Steve Benard. 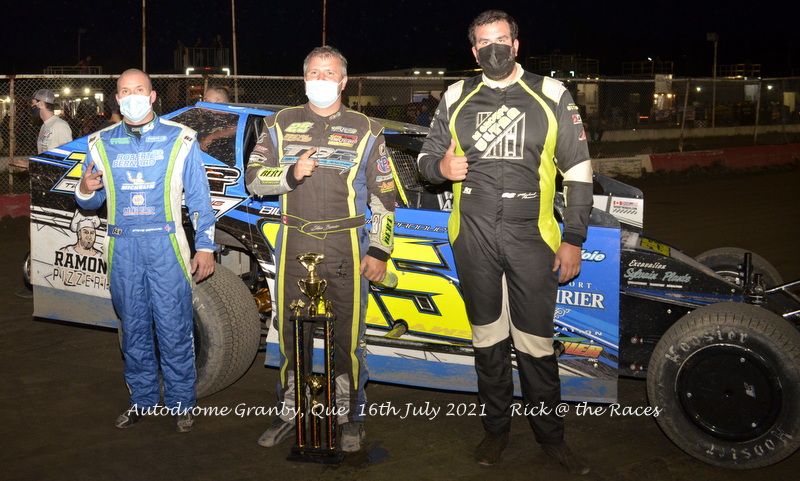 Bernard stayed there for the runner up spot and Michel Parent got third. 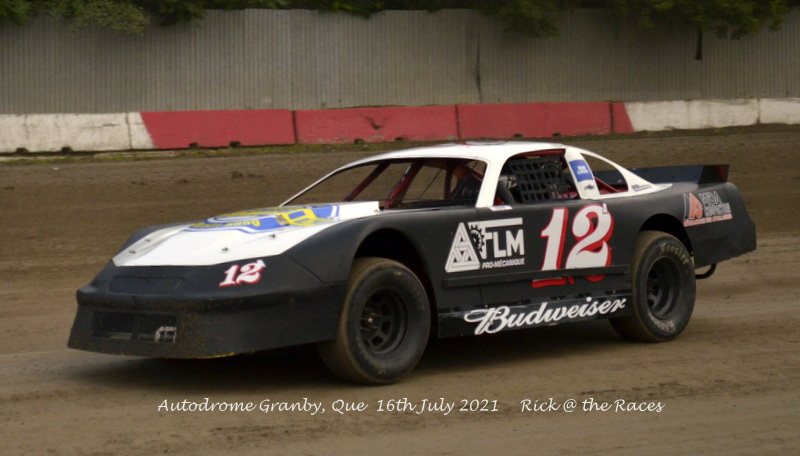 The Pro Stocks were up next and once again, Alain Brochu got the win.

It was nice to see my friend, Bruno Cyr get a podium third.

The last race of the night was for the Sportsman . 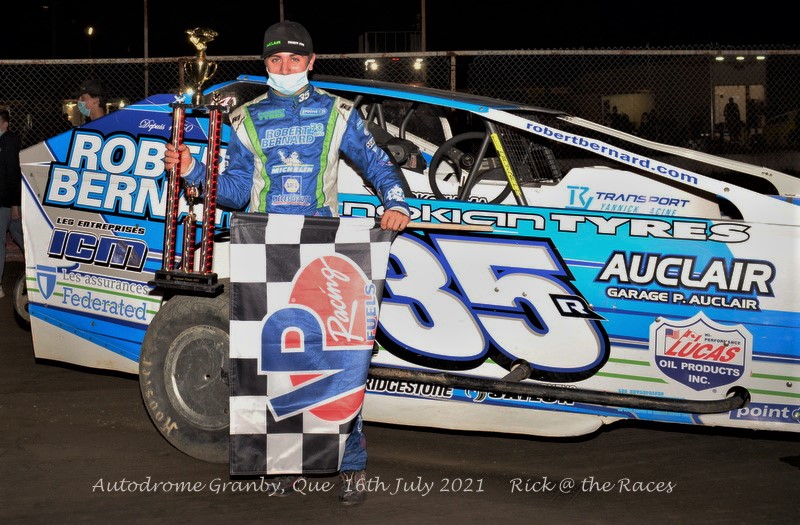 This was won by William Racine.

It was all over before 10-30,  An early finish is just what we needed. Don was off on vacation with his wife early the next day, and I had a full weekend of racing ahead of me.

My plan for Saturday was for a trip down to the Brockville Ontario Speedway.

There’d been a lot of rain in the area and the B.O.S was one of the many tracks that had to cancel. I heard the cancelation notice soon after 2-00 pm, and was wondering what to do.

I knew the paved ICAR  track at Mirabel, Quebec were running, so decided to head there.

I was nearly at the track when I got a message from my good friend Isabelle Tremblay of the Nicolas Vaillant Racing Team,  saying that it was “road course day” and not the oval . The road course and oval events run on alternating weeks, with  one in the afternoon and the other in the evening . This week was road course  and the days racing had just finished.

I had visited the Vaillant race shop in March during  a Rick and Dons race shop tour.

I was only about 15 minutes away so Isabelle told me they  would wait around for me , so I could take a few pictures. 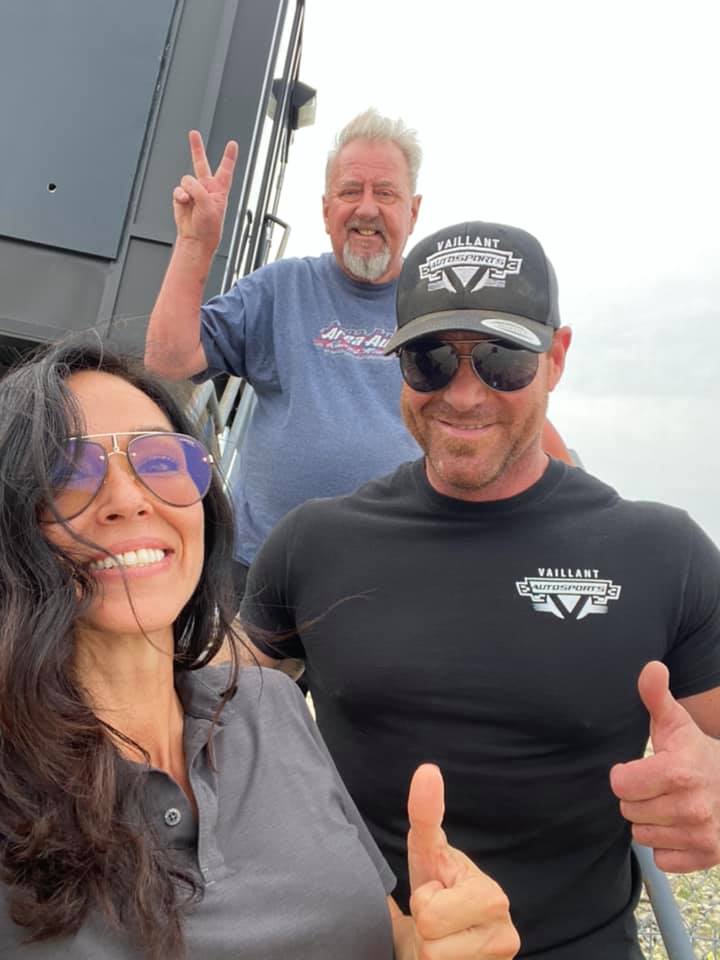 I spent about an hour there and met Serge Bordeau who won the afternoons feature. Vaillant Motorsports is the Series Sponsor.

I also had the pleasure of meeting Nicholas’s father Bernard , who was also a racer , many years ago. 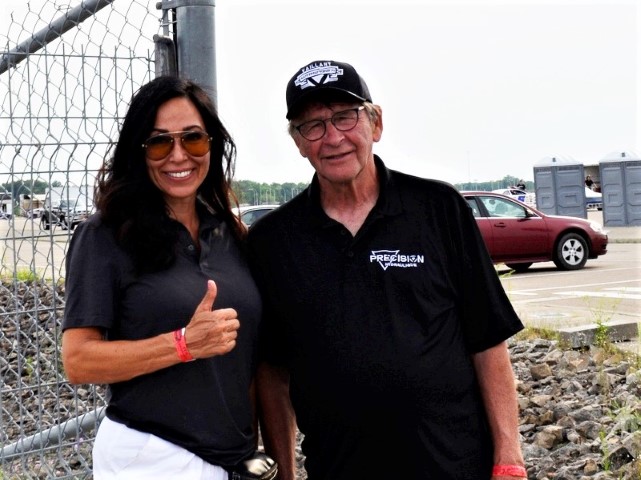 As mentioned , it was the road course  on this occasion , but I also had a chance to check out the Oval. I hope to be there next week.

My Sunday started with a morning appointment on my couch for the live TV coverage of the British Grand Prix from Silverstone.

This was a great one to watch, as the two top dogs Max Verstappen and Lewis Hamilton came together on lap one. Verstappens car was severely damaged and was put out of the race. In my opinion it was ” a racing incident” but the stewards had to blame someone  and Hamilton was issued with a ten second time penalty.

After the restart he clawed his way back through the pack, finally taking the lead from Charles Leclerk in the Ferrari on the closing laps.  This was one of the best GP’s I’ve seen for a while,

In the evening , it was the Cornwall Motor Speedway for a show , that were minus the Modifieds.  Instead there was a large program of Sportsman , Rookie Sportsman, Pro Stocks, Mod Lites, Lightening Sprints and Vintage.

I had a quick wander around the pits, and made a B line for the Mod Lites.

My friend Josee Fortier has been racing them for a few years, and with all the COVID restrictions, it’s been a while since I saw her. 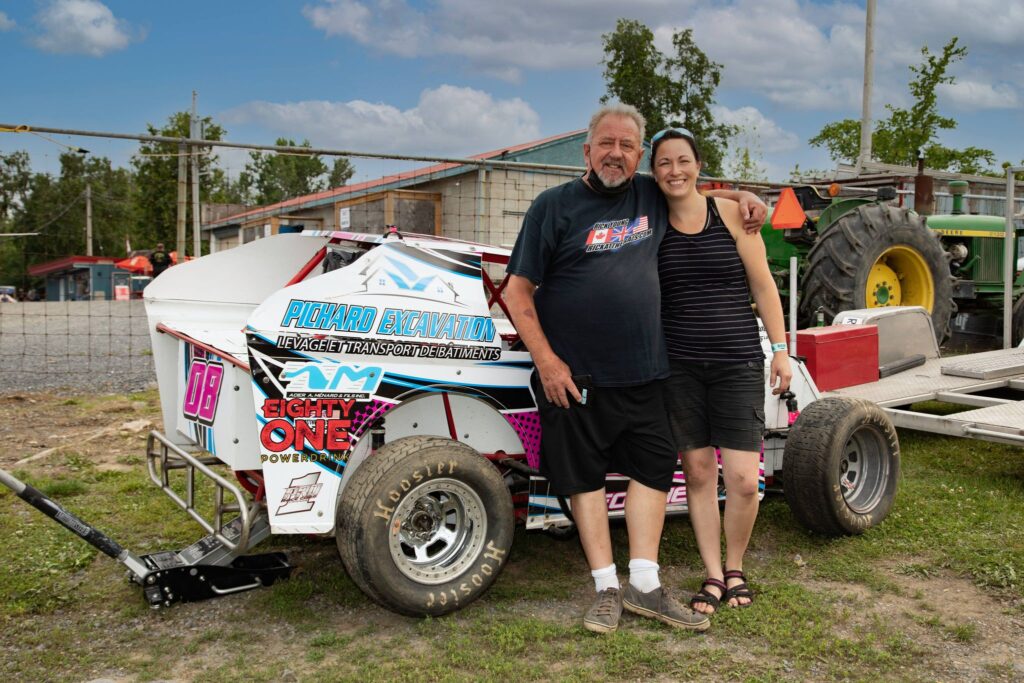 I also dropped in on the Jarrett Herbison Sportsman Team who were getting ready for the action. 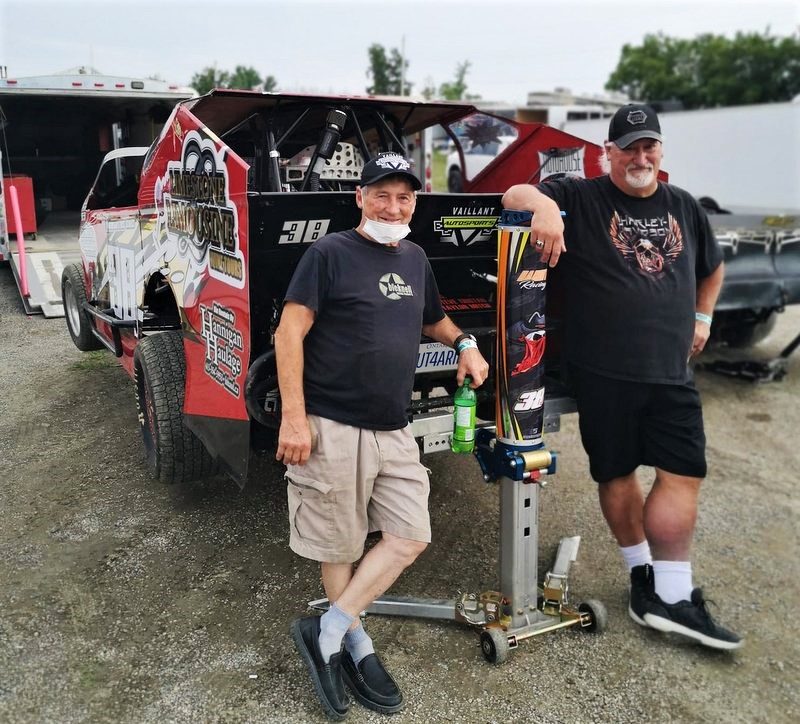 On this occasion , I did all my picture taking from the center , and gave my usual pit tower warm up pics a miss. 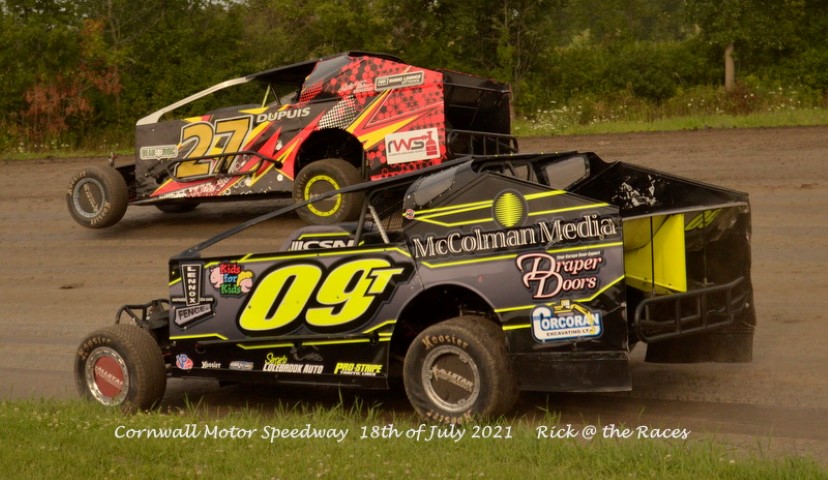 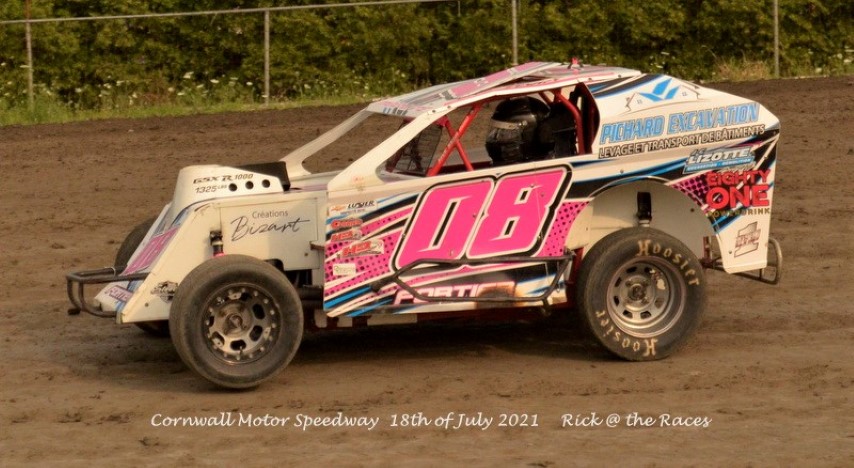 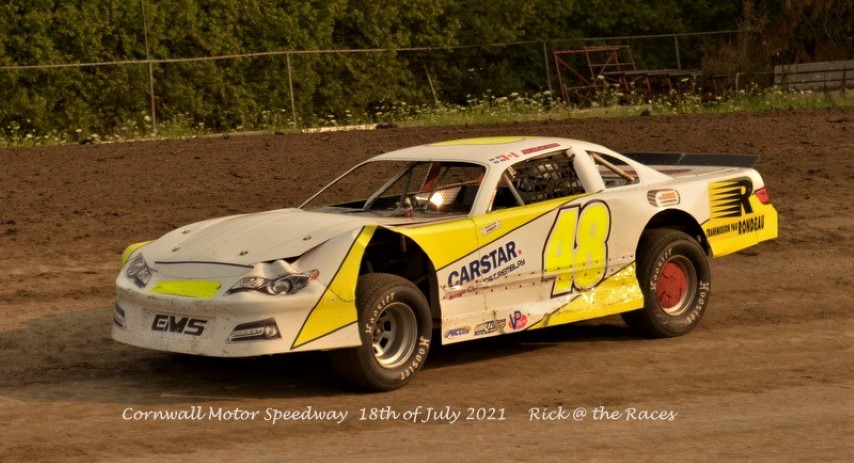 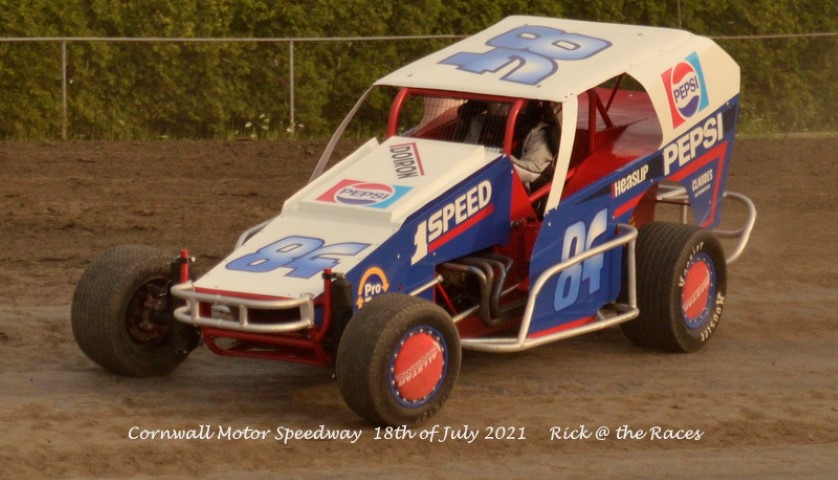 The first three feature races took place before the intermission. 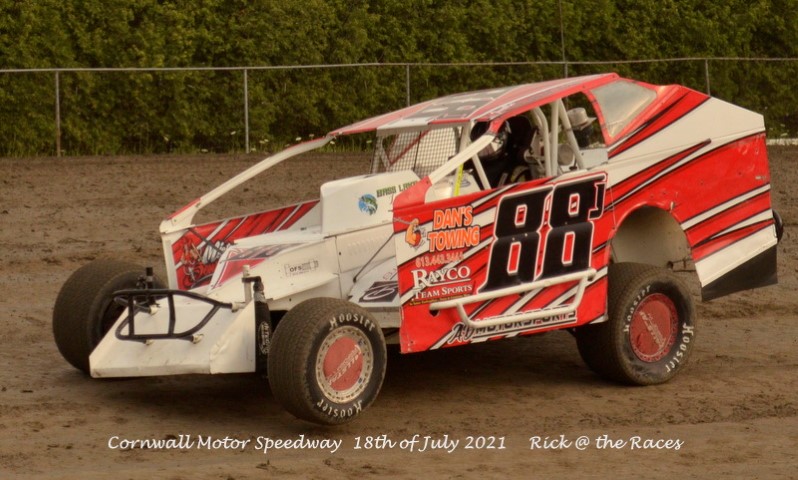 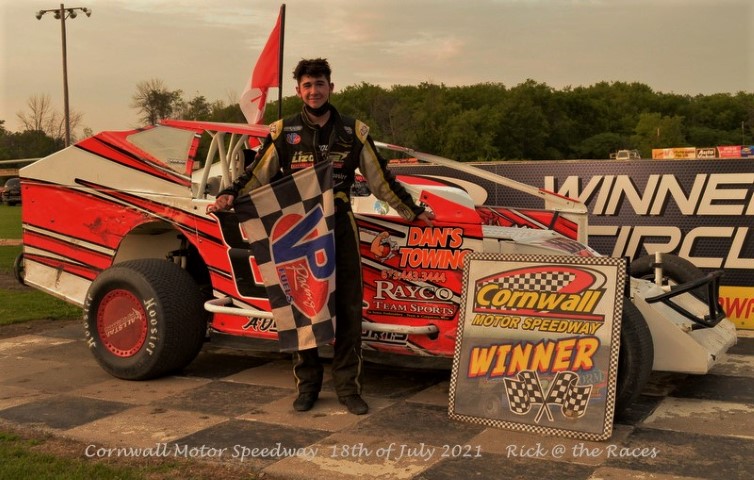 The Rookie Sportsman were up first, and it was Justin Cyr who took the checkers. 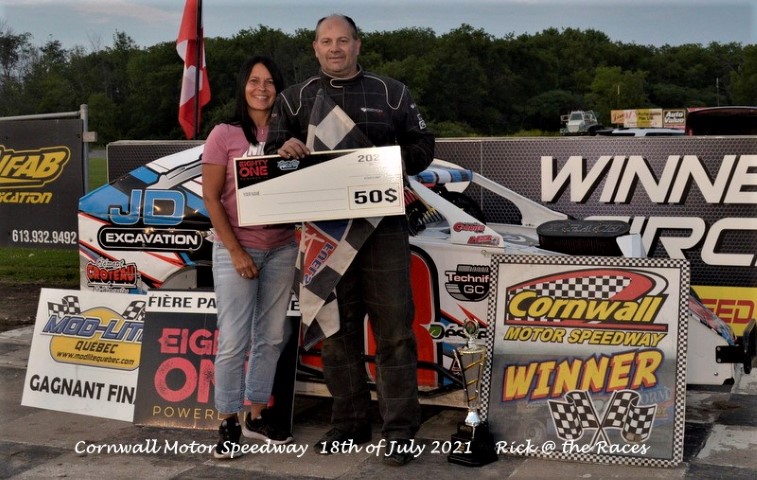 Straight after intermission, the Pro Stocks came on track for there 50 lap headlining event.

This was surely the best race of the night, where my good friend Bruno Cyr led for most of the race, only to get robbed by some late cautions which allowed Pascal Payeur to catch up and snatch the victory 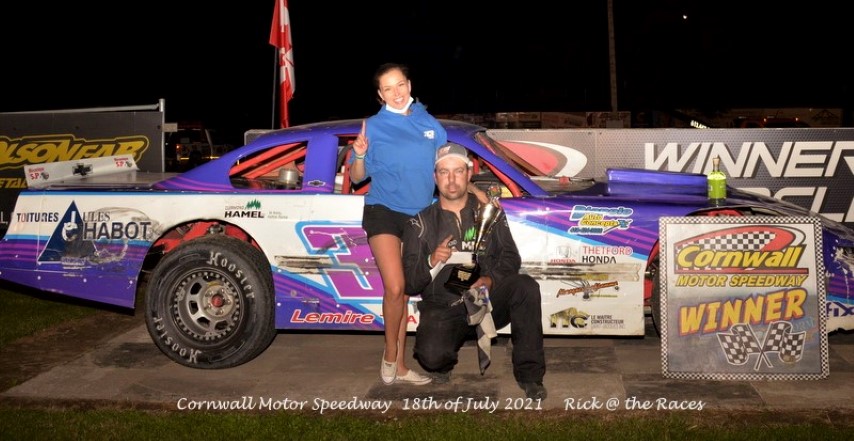 The Sportsman feature followed , and it was Justin Cyr’s older brother Gabriel who got this one. 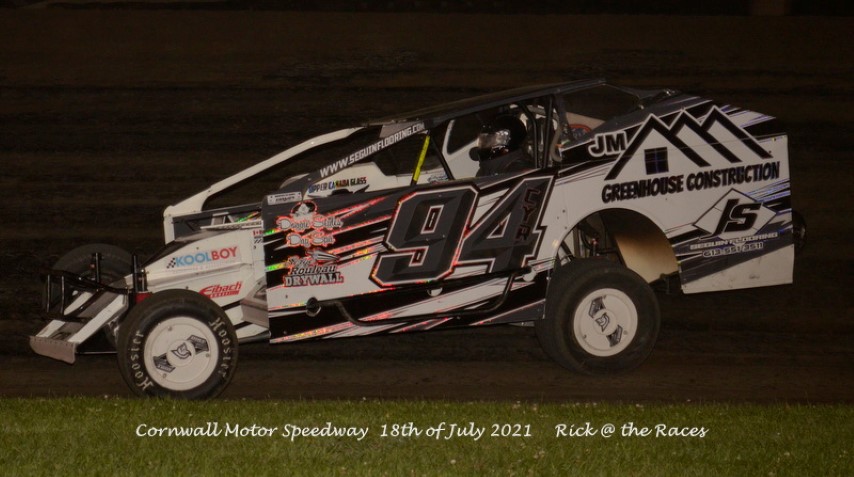 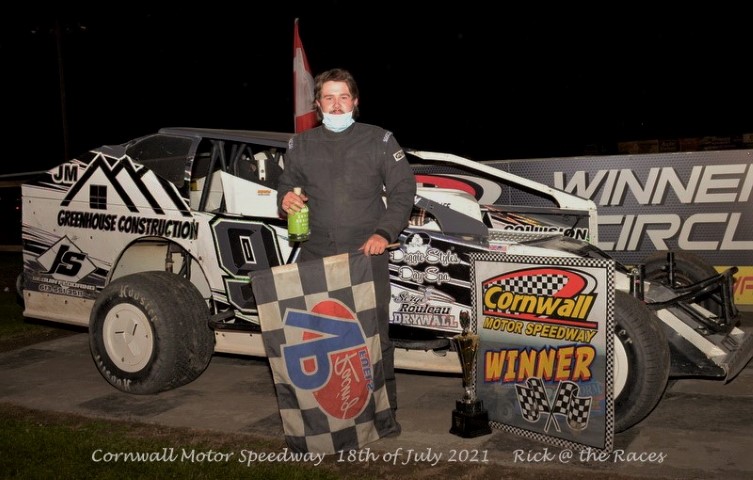 The final race of the night was for the Vintage, and we saw Randy Gaudet in Victory lane once more. 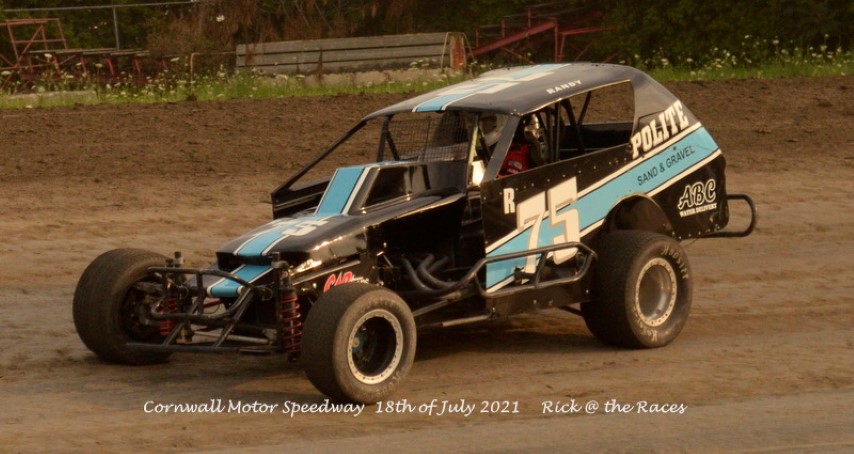 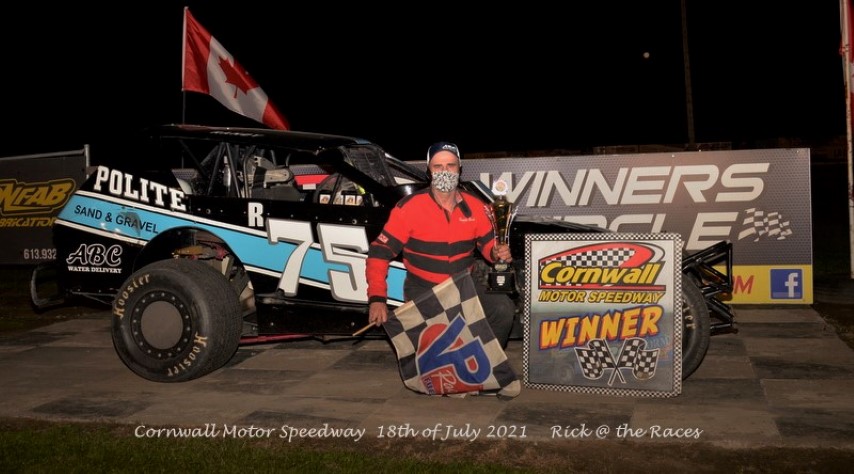 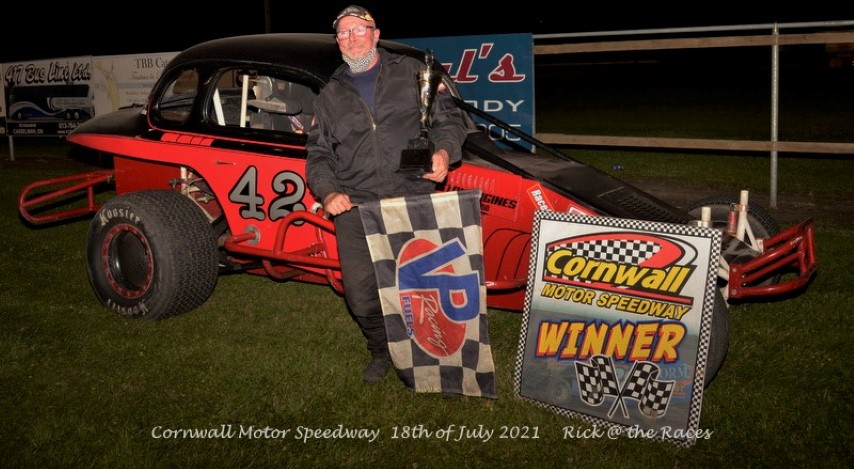 The class for older cars was won by Pat Charland .

The track was in great shape , and with a swift turn around of races, the show was over before 11-00..