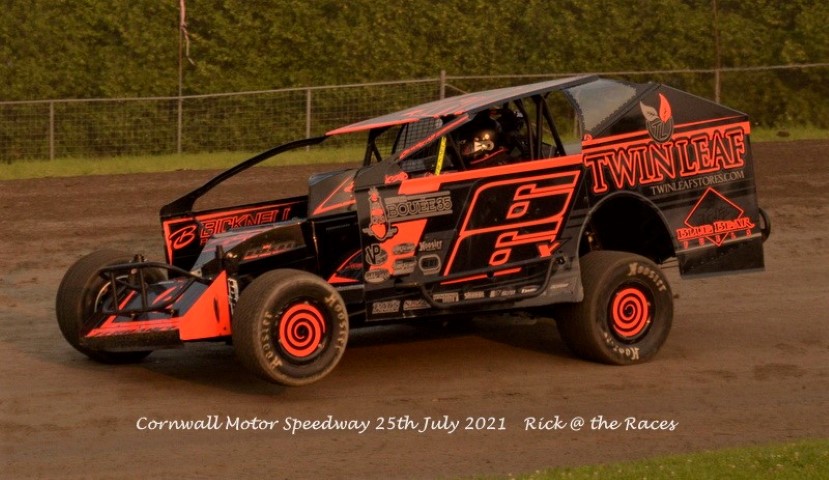 This past weekend there was nothing on my schedule for Friday 23rd of July. Autodrome Granby were not running on this occasion , so I had a Friday night off.

My plan for Saturday was to visit the ICAR oval at Mirabel, Quebec.  The track is part of the ICAR motor sport complex located on part of the former Mirabel Airport. The passenger airport has been closed for about 20 years, but a small section  is still used for freight. 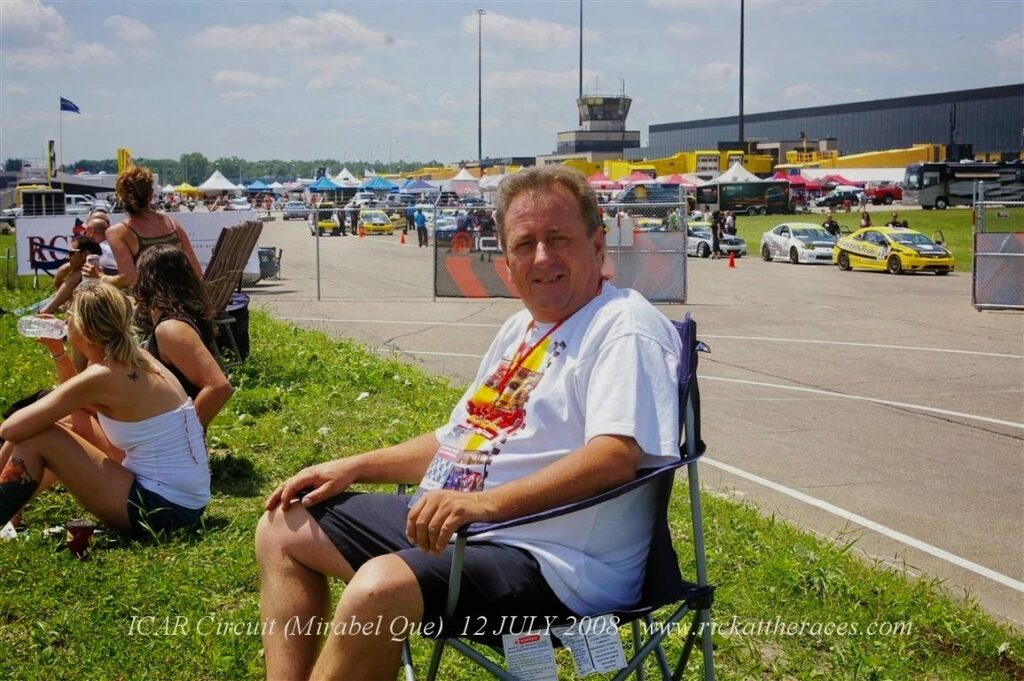 The ICAR Motorsports complex has been there since 2008, and I was in attendance at one of the first events that year. 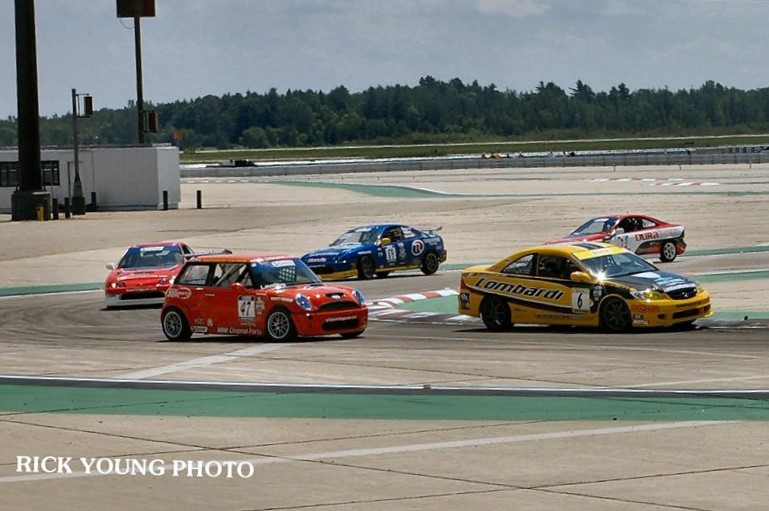 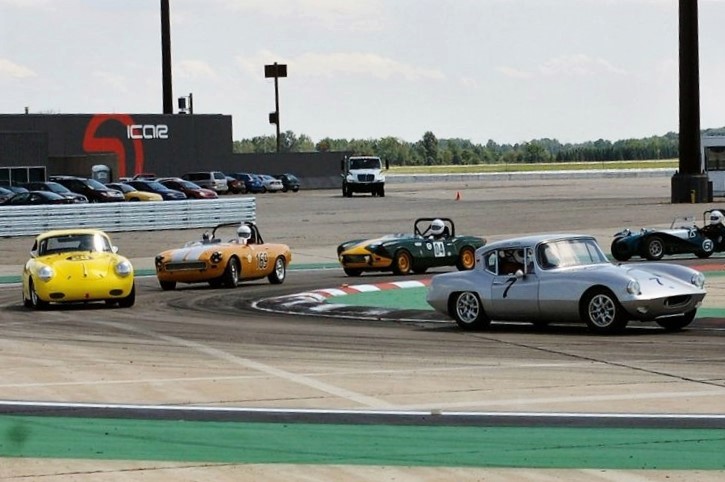 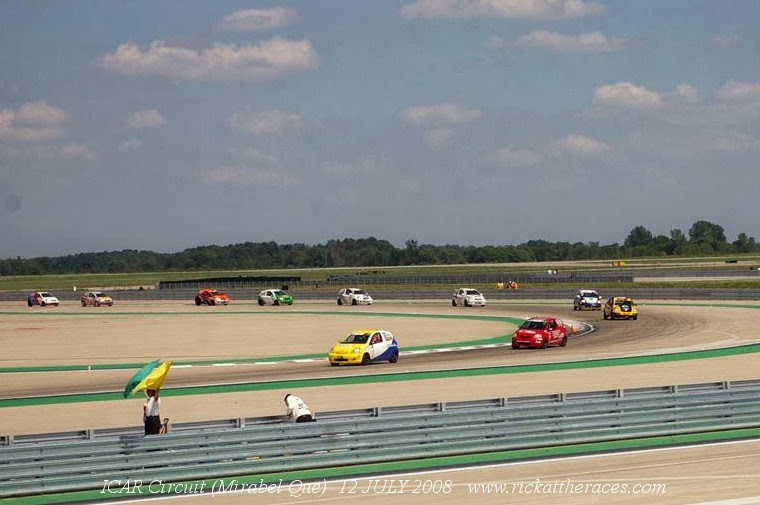 This was a road course and layed out on the old run way.

Since then I’ve been back for a NASCAR Canadian Tire Series event.

Moving along to 2019, and  a few miles away,  the nearby Autodrome St Eustache closed it’s doors , and the local pavement drivers were without a track. The ICAR complex became the perfect solution for a replacement oval.

The new oval is now in place , so I gave  Brockville Ontario Speedway a miss this week and headed for Mirabel.

I’d been invited to the track as a guest by my friends Nicolas Vaillant and Isabelle Tremblay of the Vaillant Autosports Team. 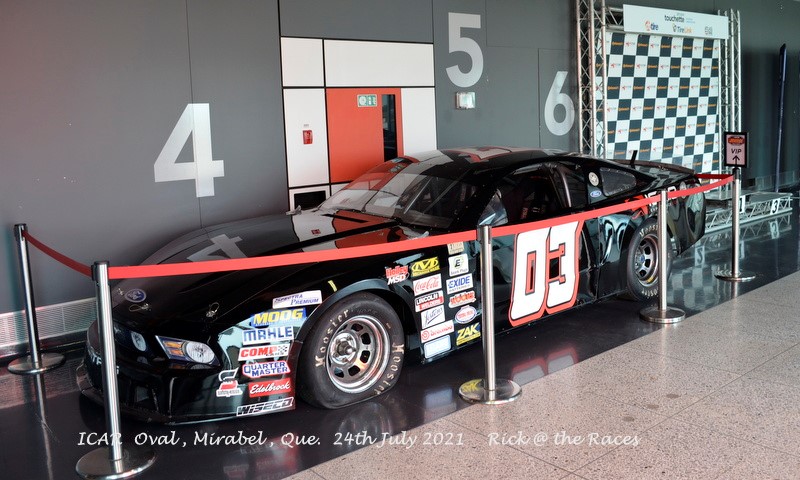 After checking out the impressive VIP suits in the former departure lounge, I headed down to the pits to meet the team.

Nicolas was competing in the NASCAR Sportsman Whelan Weekly Series . 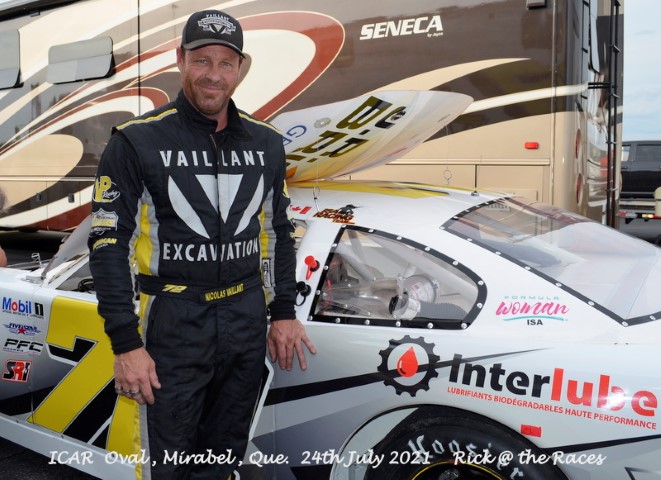 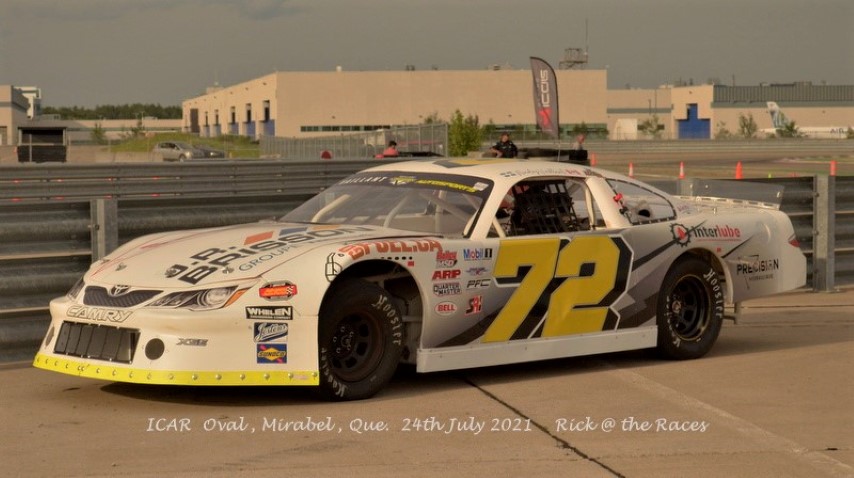 The Sportsman were the headline division , in a program that also included Sport Compact and Legend Modifieds. 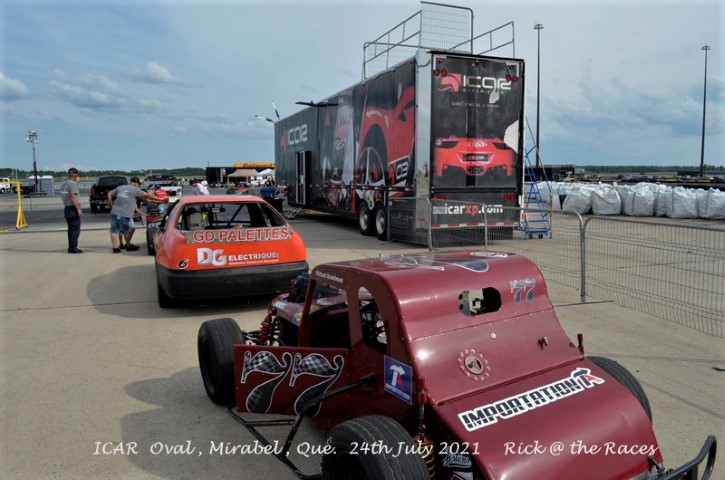 The names given to the divisions, are a bit confusing to a dirt racing fan like me,  I would of called them Late Models, Mini Stocks and Legends. 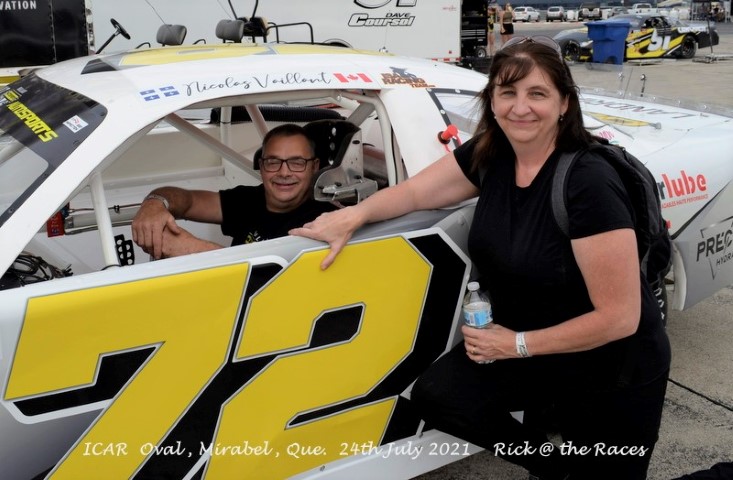 While in the pits , I met up with some other good friends, former Dirt Modified drivers Dan and Tammy Jalbert.

Dan who works for Vaillant Autosports would soon be returning to racing .    More about that later. 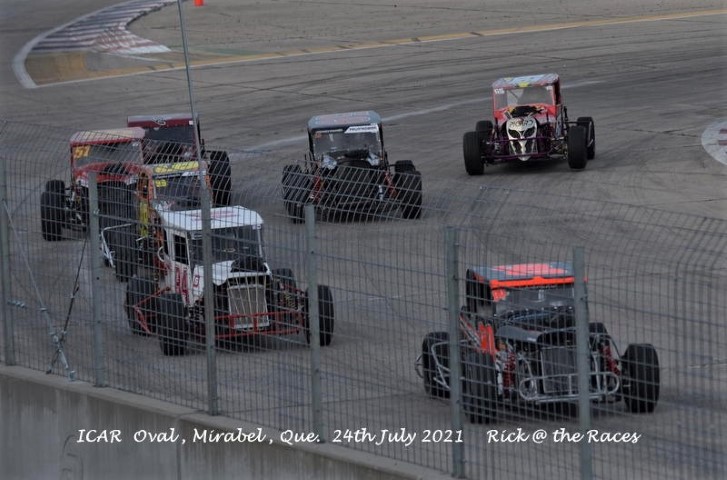 Once racing got under way, I tried to find a good spot for taking pictures.  The track is very much like a hair pin , with the straights quite close together and a narrow infield, so I decided to stay on the outside. Vantage points for taking pictures were scarce, but I did my best.

Dave Coursol  # 51  took the checkers in the Sportsman Feature, 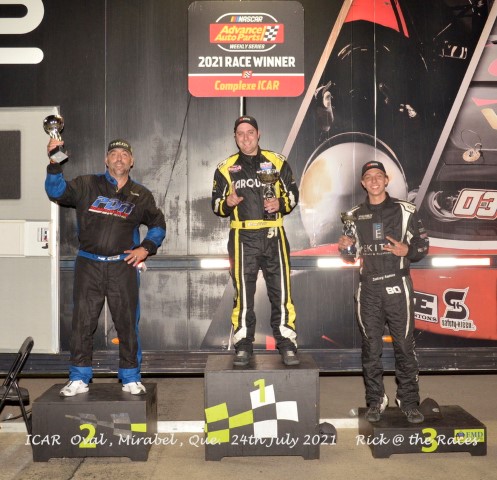 When the racing was done, the winners were presented with their trophies in the pits.

So that was my first experience of the Oval at ICAR ,  which becomes track number 241 on my TRACKCHASING totals.

While I was at Mirabel, my usual Saturday night track, the B.O.S failed to get the complete show in, due to rain.

Sunday , I was back at my local Cornwall Motor Speedway, where once again rain was in the forecast.

One of the first people I met was the aforementioned Dan Jalbert, who was returning to the Modifieds after a long lay off. 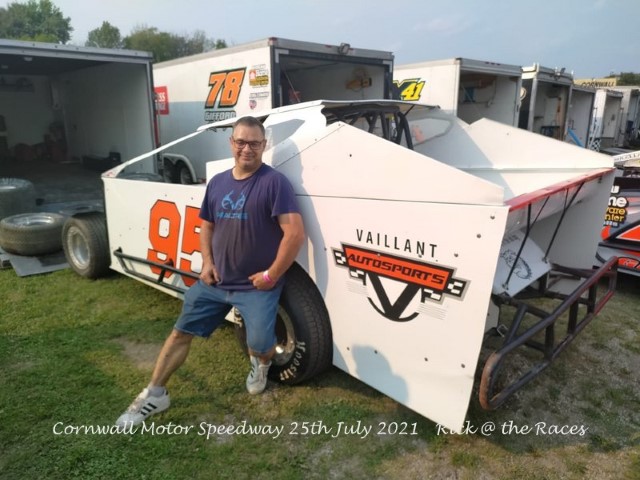 He was driving an ex Billy Cook car with an engine supplied by Vaillant Autosports. 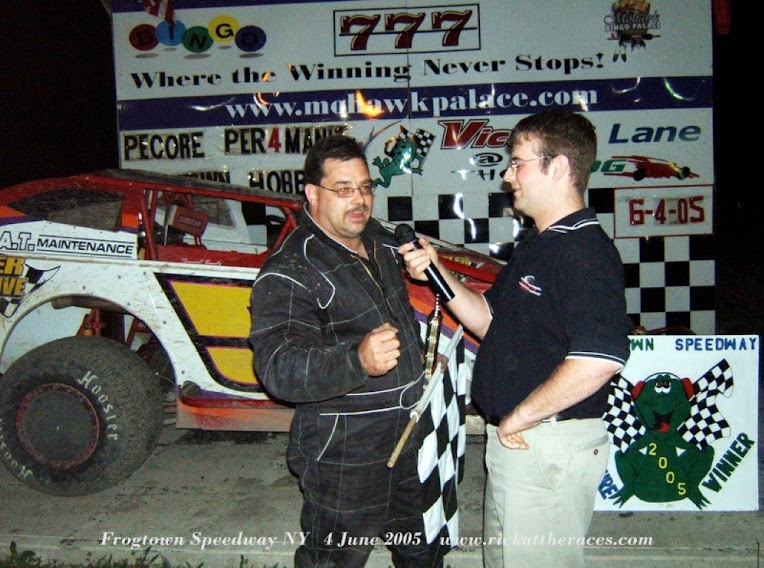 Another driver returning after a number of years away , was Denis Gauvreau from Gatineau in the Pro Stocks. 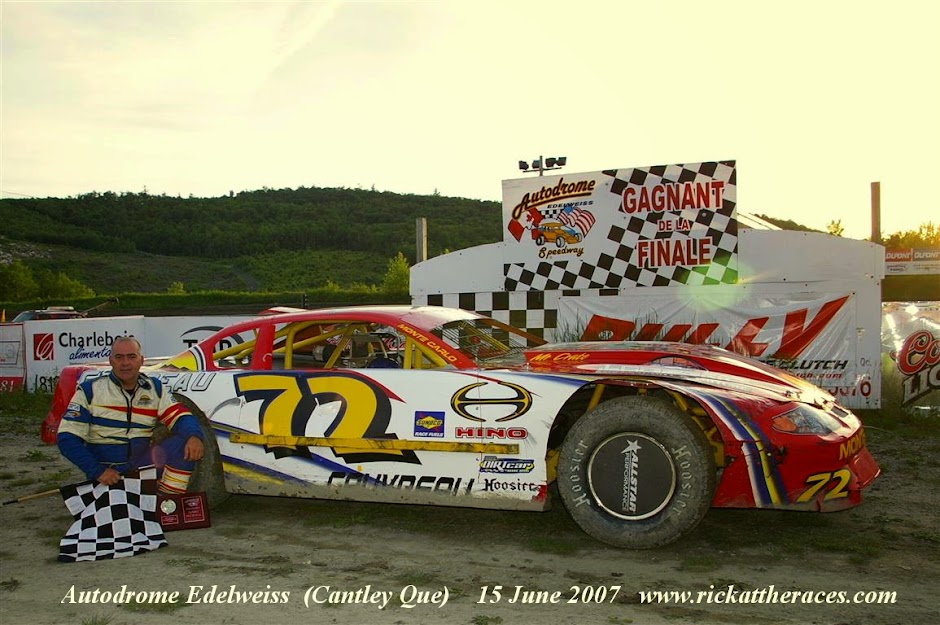 FLASHBACK to 2007 and Denis gets a win at Autodrome Edelweiss

As well as this ,  a bunch of extra Dash for Cash races had been added , so it was going to be a busy night.

The forecast was for rain sometime during the evening so we knew we had a race against time with Mother Nature. 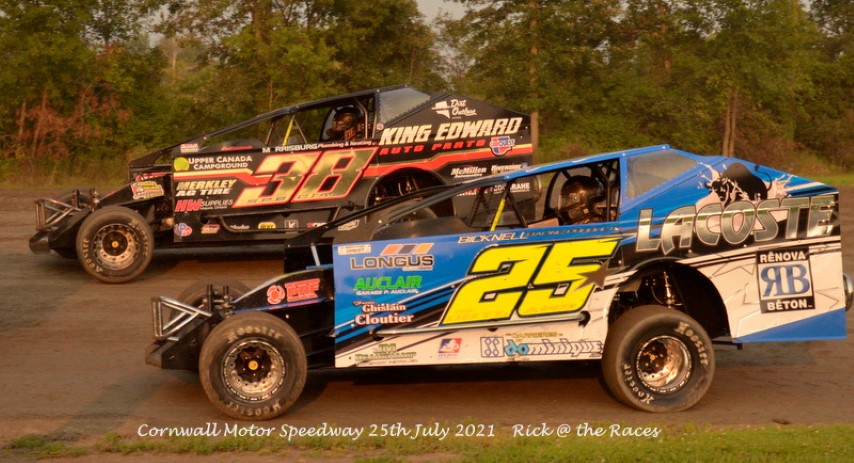 The heat races and dash for cash were done before the short intermission, and with dark skies looming  the features began.

We got word from race control there were to be no Victory Lane ceremonies in an effort to get as many races in before the rain.

Ryan Stabler won the first feature which was for the Sportsman. 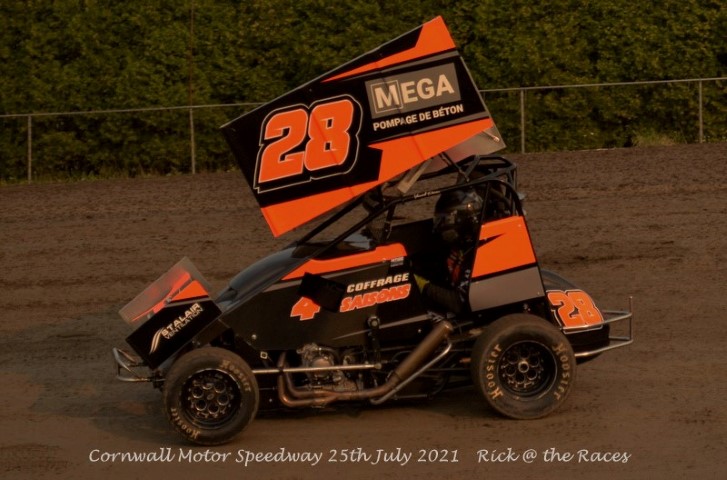 Next up was the Lightening Sprints which gave Jordon Poirier another win.

We were now starting to get the odd spot of rain as the Modifieds took to the track, for their 40 lapper. 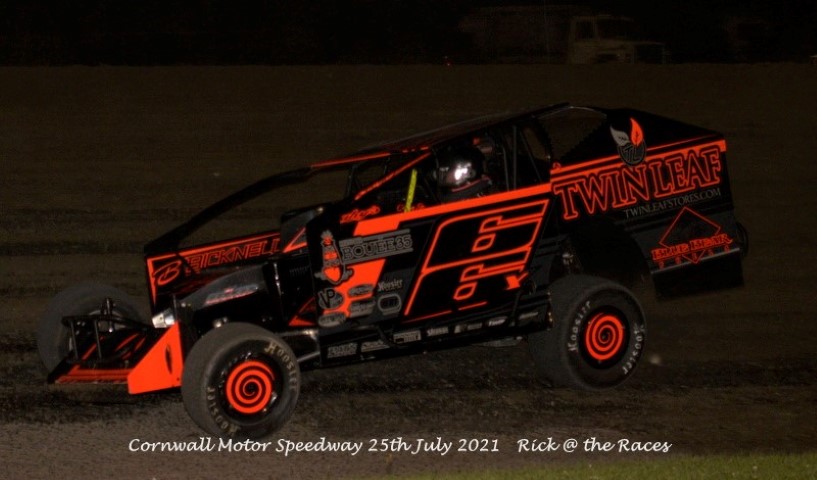 No serious rain throughout the race as Carey Terrance got his first win of the year.

We had few more teasing spots of rain during the Pro Stock race as we kept our fingers crossed.

Surprisingly , we got this one in the books as dark clouds , thunder and lightening filled the skies. 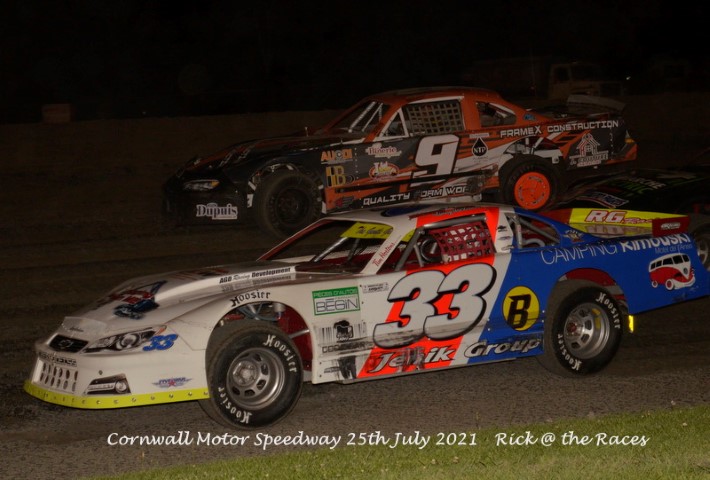 Bruno Cyr got this one.

We had two more features to go, and things were getting worse.

The Mini Stocks entered the track for their feature. We could only hope !

Our luck was running out, as a late race stoppage coincided with the start of the storm,  the rain came down in buckets, and the night was over, as people took cover.

Alex Charbonneau was leading at the time of the stoppage.

The only race , not  to take place was the Rookie Sportsman Feature.