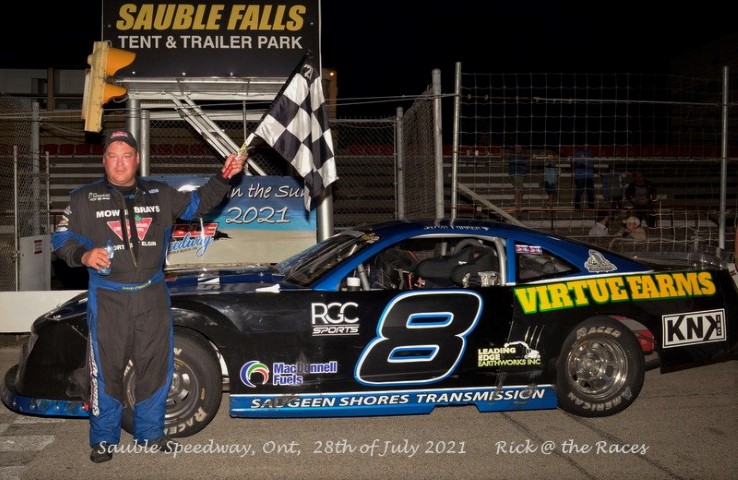 If I have to find one positive thing about the border closure between Canada and the USA , it’s that it has allowed me to visit some of the Ontario tracks I’ve missed out on , over the years.

A few weeks ago , I managed to get to the Southern Ontario Motor Speedway (South Buxton) and the Delaware Speedway near London.

This week the Sauble Speedway was my target. 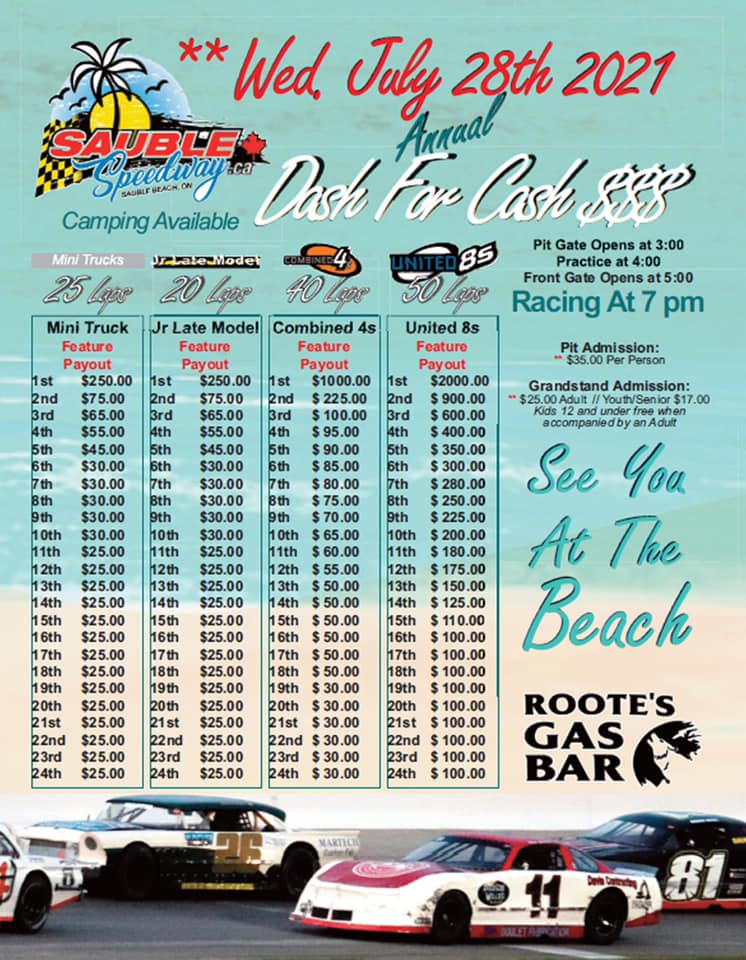 They had a midweek special on Wednesday the 28th of July , which was ideal for a road trip.

I passed by this track last year when I was returning from a visit to Manitoulin Island. 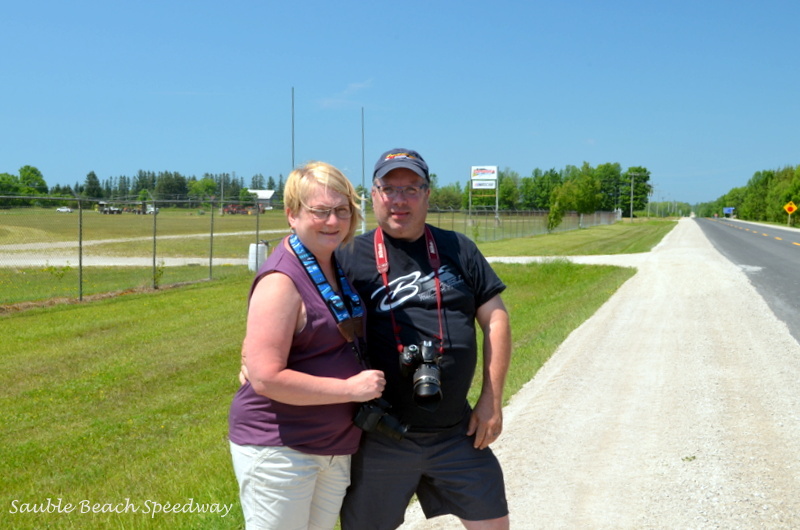 On that occasion there was no racing taking place, but I managed to meet up with fellow local media man Sylvain Lauwers and his wife Lyse, who like me, were there just to take a look.

It’s about a seven hour drive from my place in Cornwall , so I left home on Tuesday and based myself at Orangeville, just north of Brampton.

As it’s the height of summer , it meant hotel rates were at silly prices  the nearer you got to the Sauble Beach, so I decided to distance myself and not get ripped off.

I got to the Orangeville Motel  about 6-00 pm and was able to relax in the room for the rest of the night.

Sauble Beach is about a 1 hour 45 minute drive away, so there was no big rush in the morning , to get to the evening races.

I took off from the motel around 11-00 am and by  mid day I was sitting at the beach enjoying an ice cream. 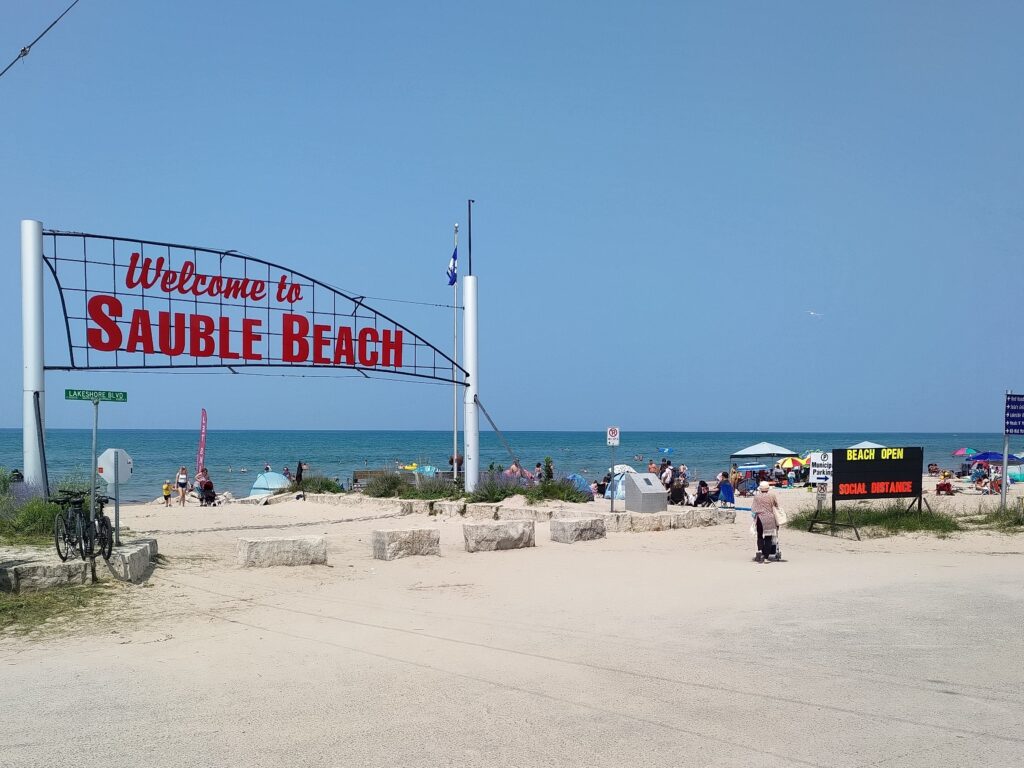 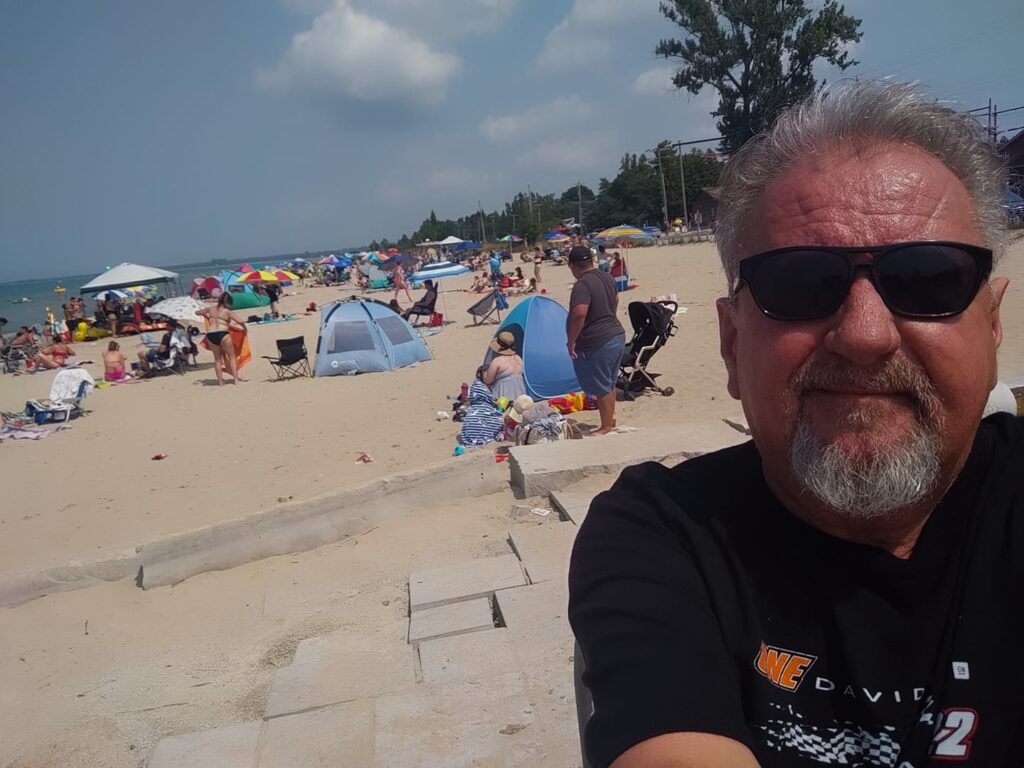 It was a scorching hot day and the place was full of holiday makers.

I killed a couple of hours at the beach while I waited until the 3-00 pm opening of the pit gate. The track, is located just a few miles out of town.

The Speedway is a paved oval and the headline division were Late Models who had a 50 lap Feature .  Also on the program , there were Four Cylinders, Junior Late Models and Mini Trucks.

Once inside , it didn’t take me long to meet up with the tracks promoter Joe Chisholm, 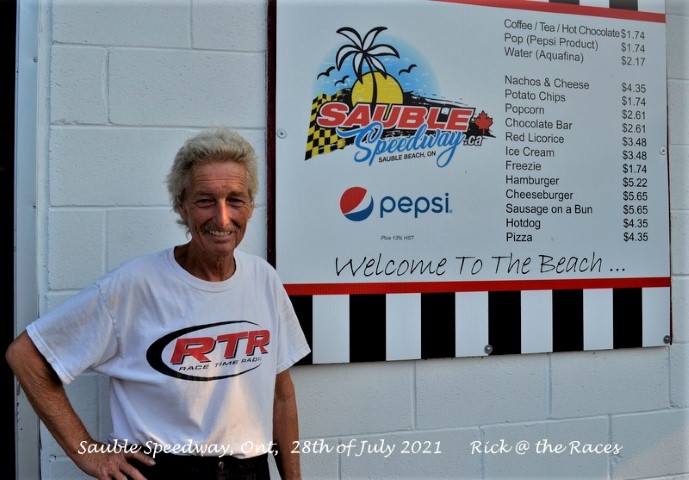 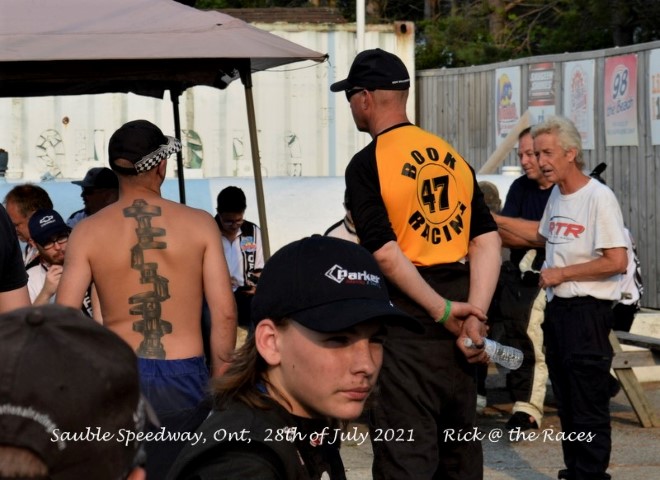 I found him to be a down to earth friendly  guy, who runs a well organized facility . He even gets awarded extra points in my book, for having Pepsi Products in the concessions.

While wandering around the pits I came across some really cool looking cars that were from the OSCAR Hot Rod Series. 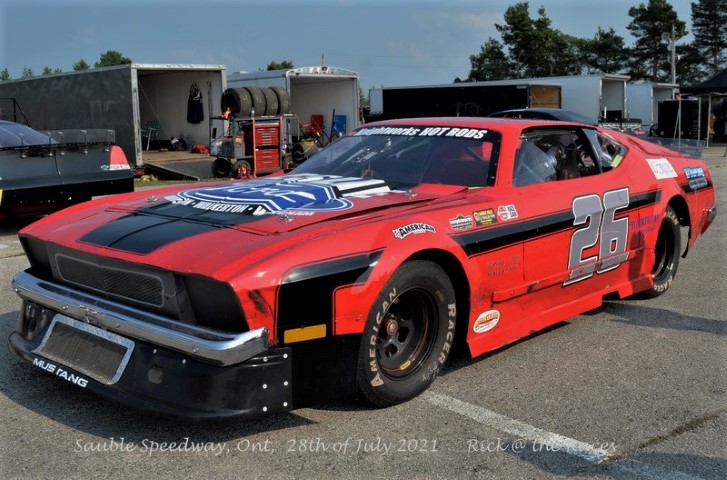 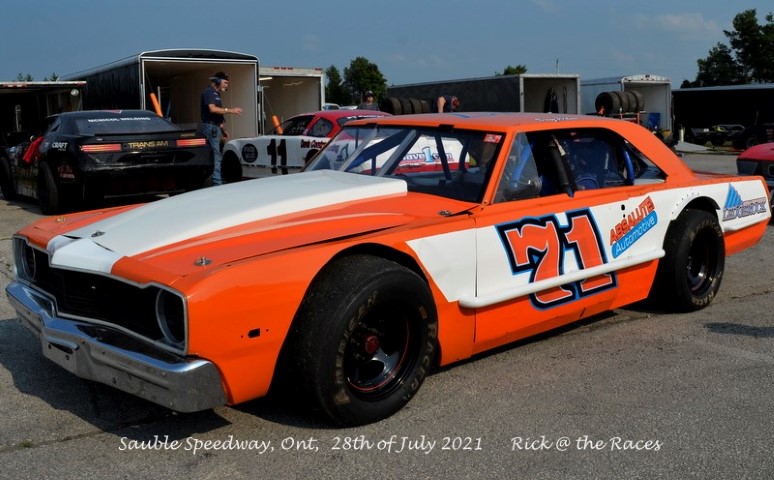 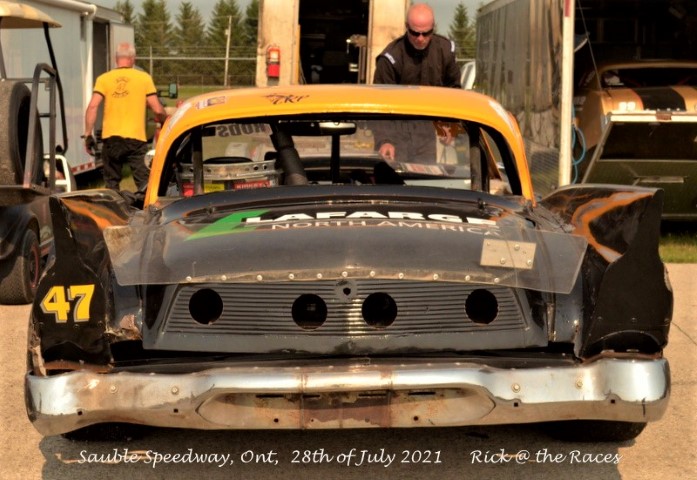 They would be racing along side the Late Models. 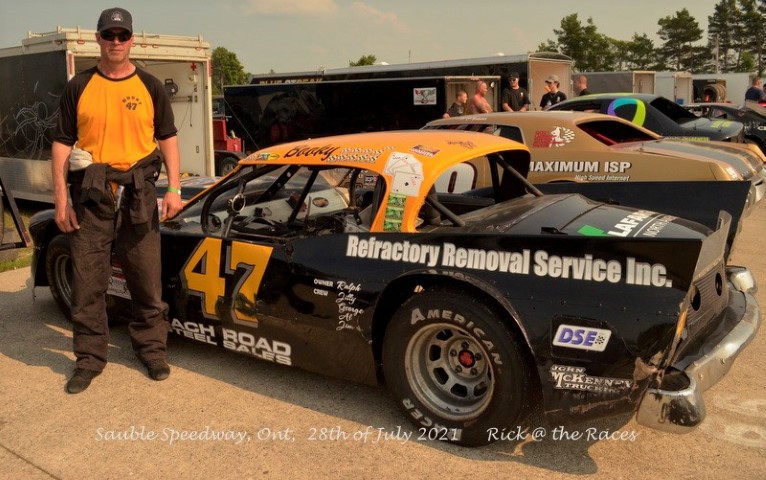 I had a good chat with Steve Book and his crew , who were there with their Studebaker Hawk.

Hot Laps stated around 4-30 and continued for two hours. 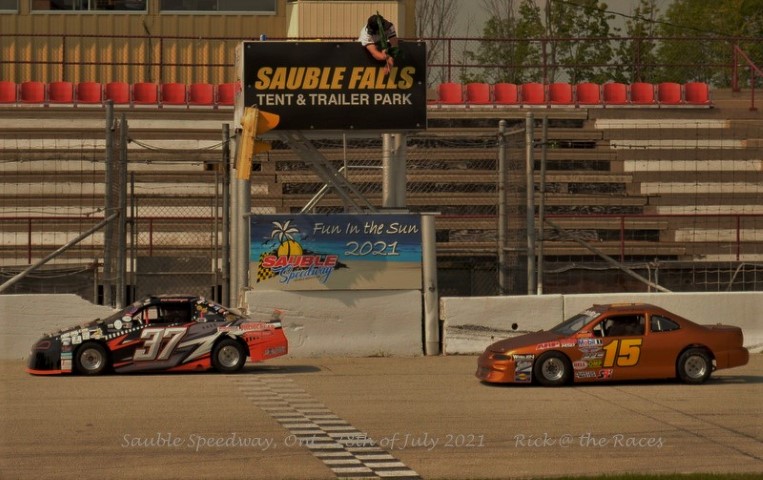 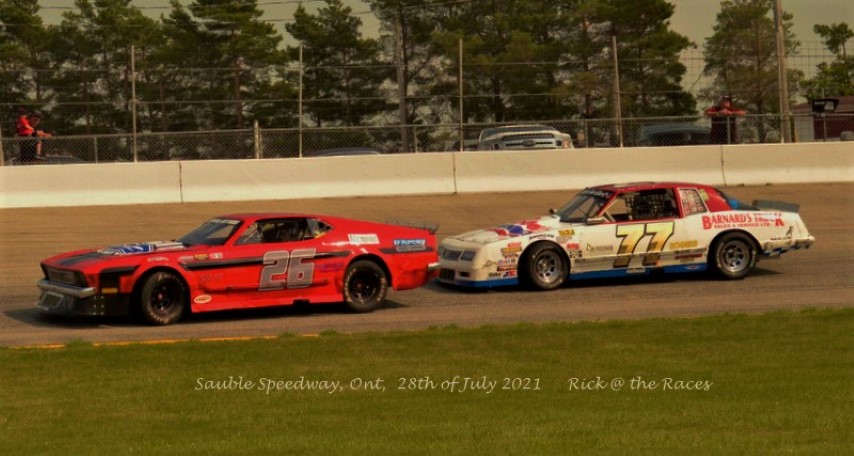 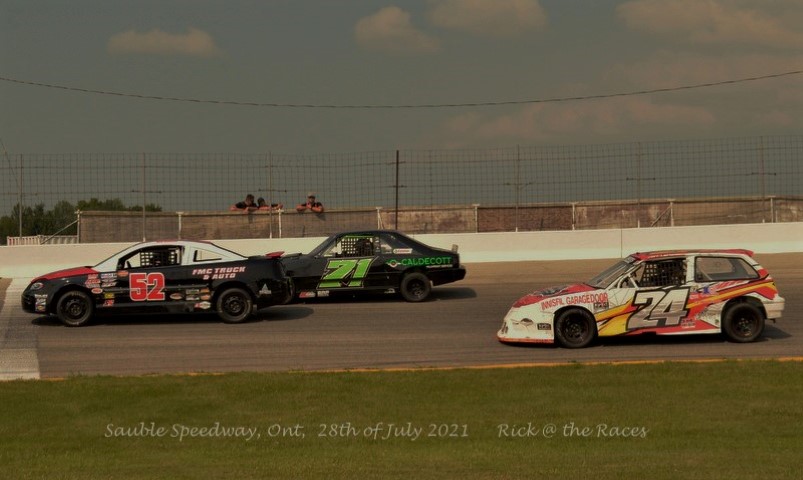 I went out to the middle in the hot afternoon sun to get a few shots.

It wasn’t long before  I was  joined Dave Franks , a familiar paved track photographer in the Toronto  area.

I’ve met 80 year old Dave on my previous sorties to this territory,  and it was great to see him again . 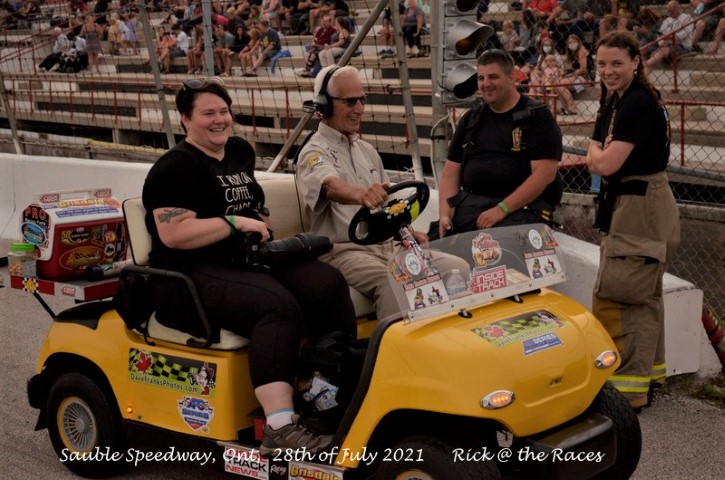 We spent a lot of time chatting during the course of the night as we worked along side each other. 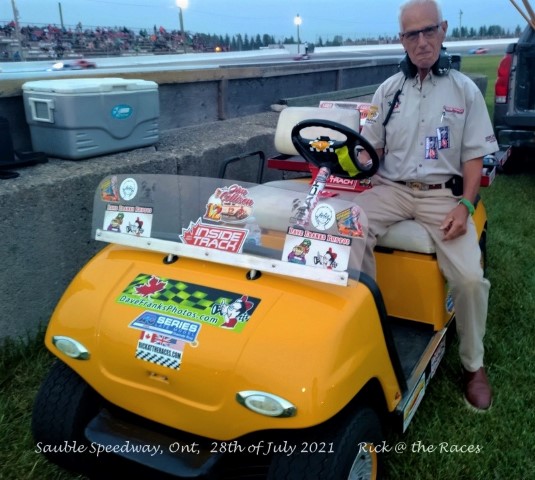 He kindly put a Rick @ the Races sticker on his golf cart.

The heat races got under way at 7-00 pm and it was time to get back on the middle again taking pictures. 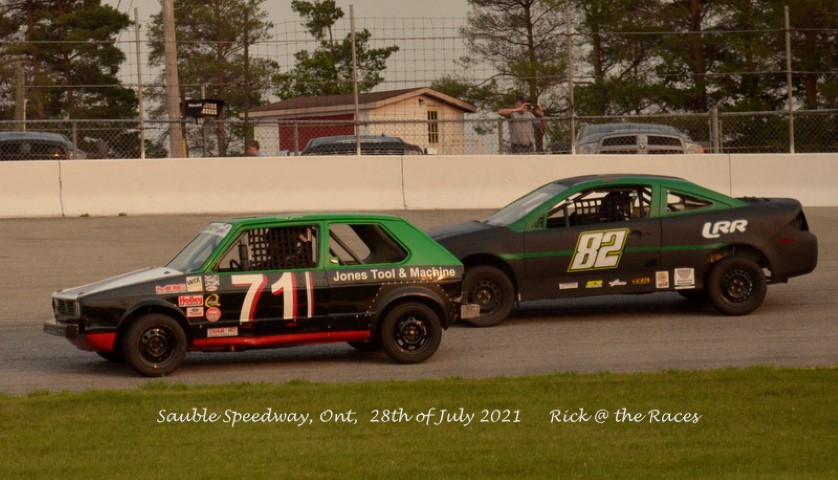 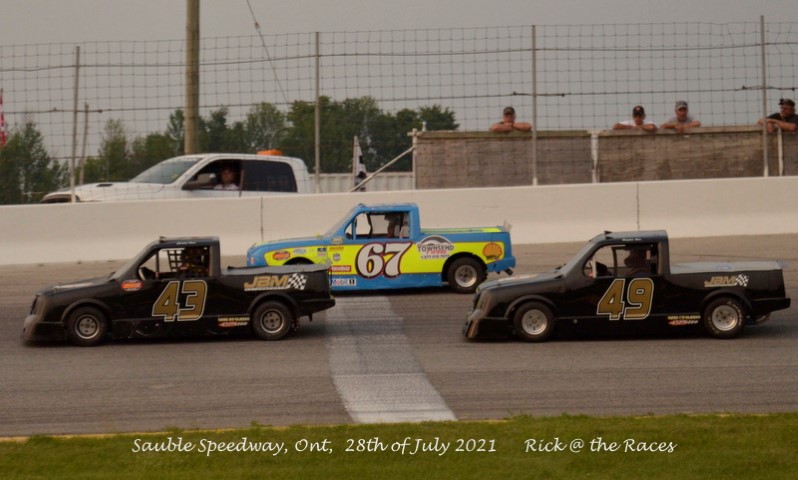 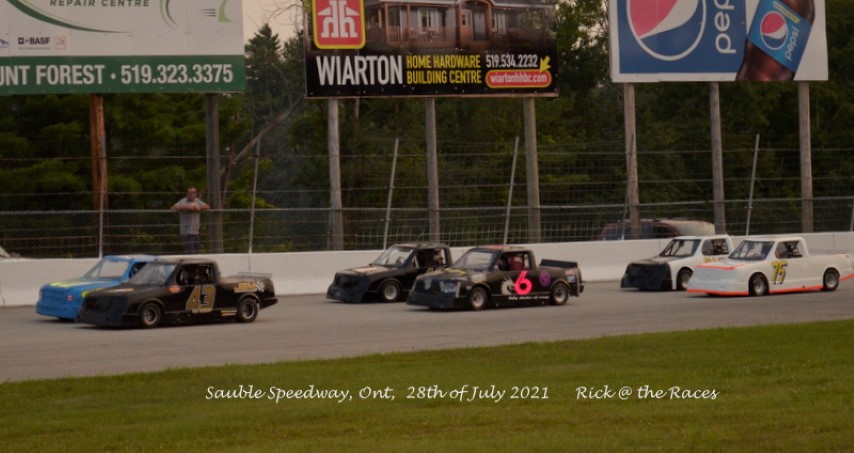 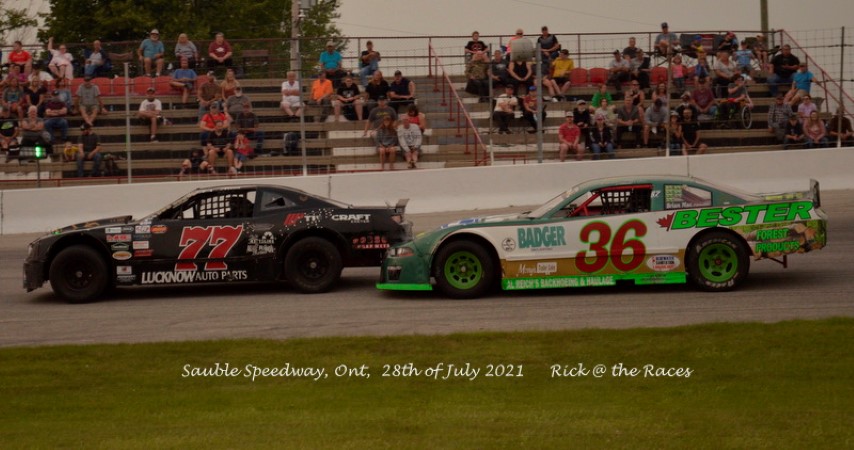 One of the OSCAR Hot Rods, a lovely Oldsmobile  Cutlass appeared to have some steering failure, as it shot across the grass out of control. 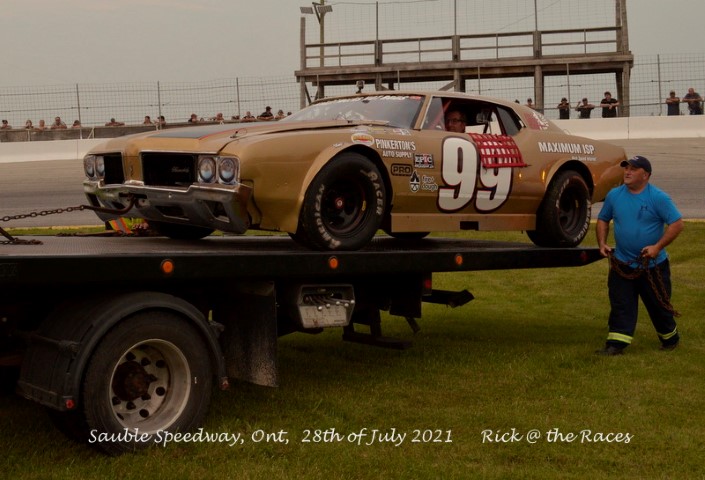 It had to be taken off by the flat bed.

After a short intermission it was Feature time.

First up was the Junior Late Models. This was won by Kyle Parker. 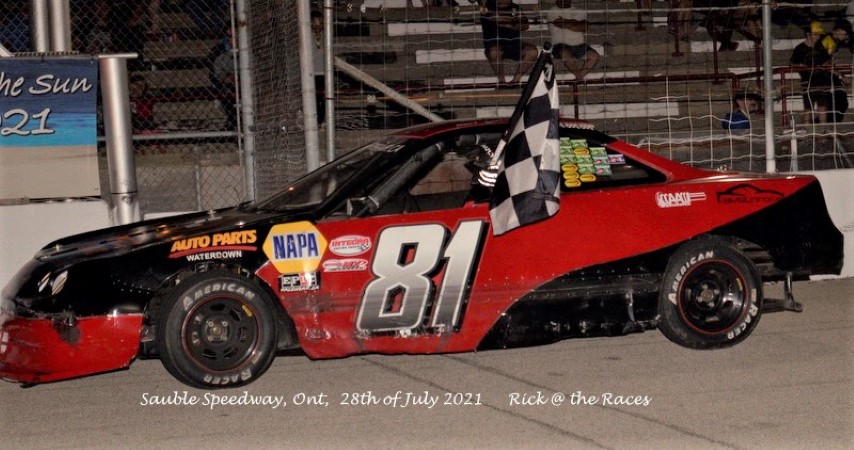 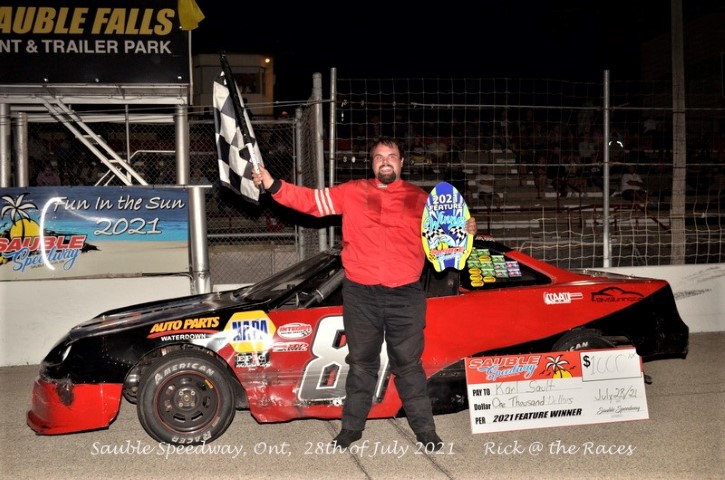 Karl Sault # 81 took the checkers in this one.

The Mini Pickups followed this, and I have to say these were a ‘first’ for me. These small trucks fitted with lawn mower engines , like the Junior Late Models were something I’ve never seen before.

Haydon Sim was the winner.

The final race of the night , was the 50 lapper for Late Models. 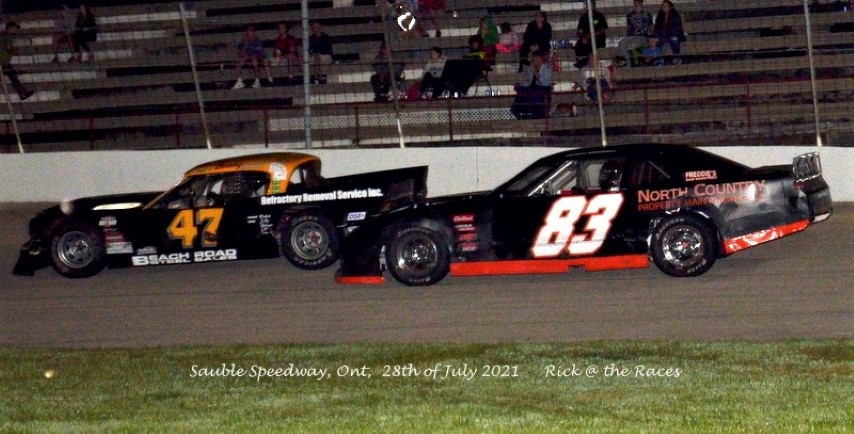 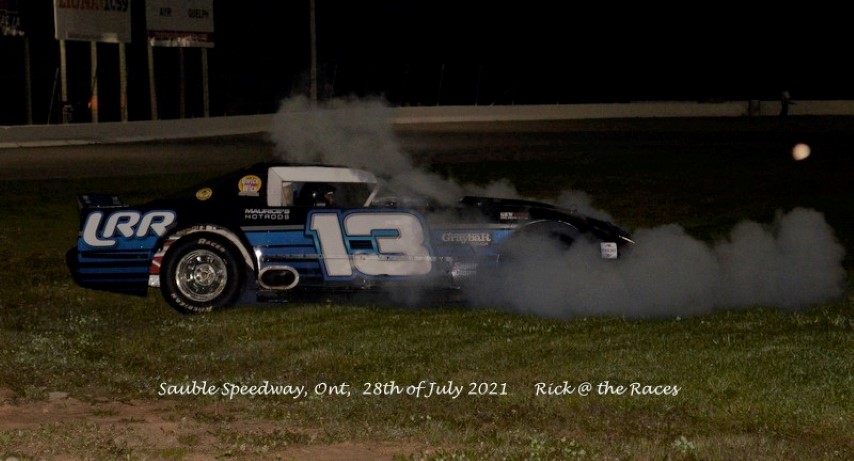 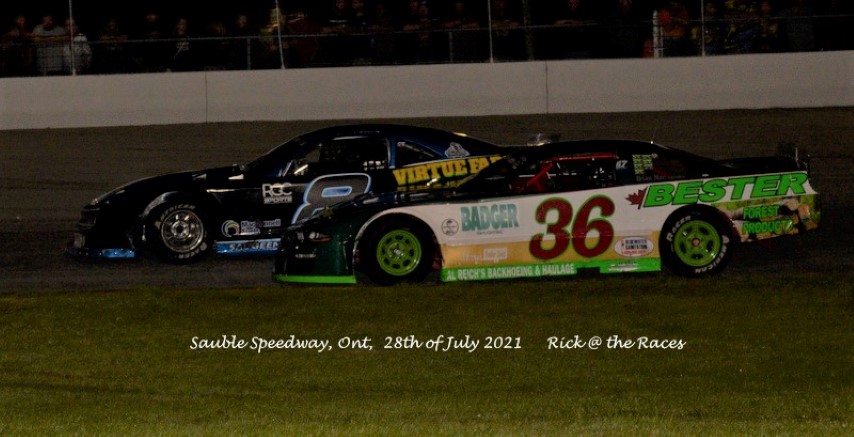 After a few cautions , the race settled down to a dog fight between Jason Parker # 8 and the # 36 car of Lane Zardo 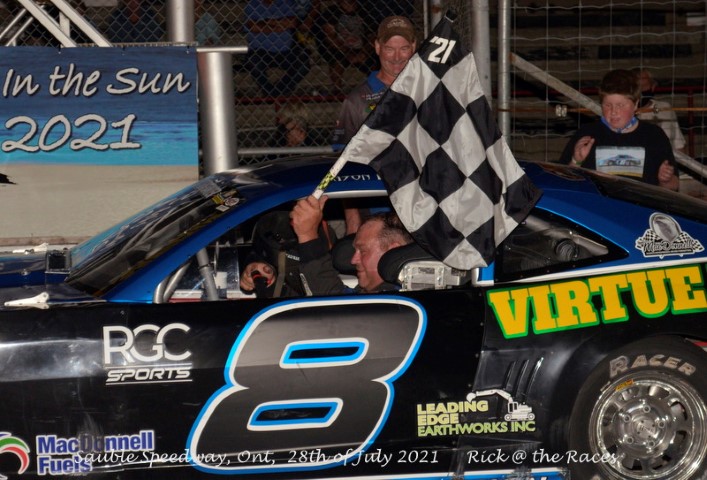 They battled throughout until the final lap where Parker claimed the win.

The show was all over by about 10-45, and after saying a few good byes, I was on my way out the gate , and heading back to Orangeville.

I spent my Thursday , taking a leisurely drive back to Cornwall up the 401.

The Sauble Speedway became TRACK # 242 on my TRACKCHASING totals