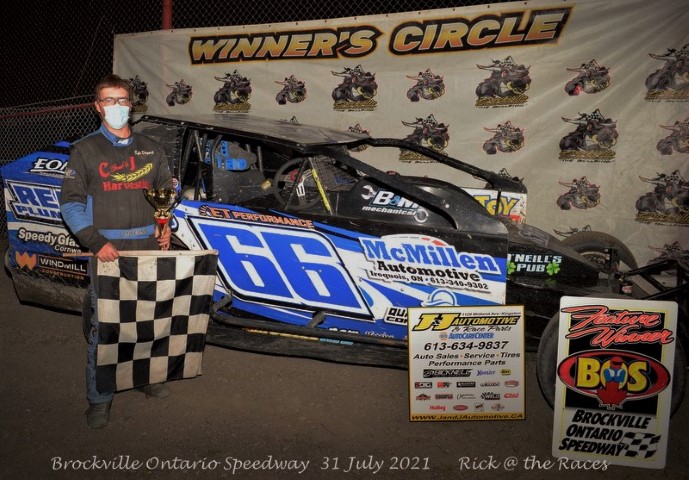 The Long Weekend at the end of July, and the beginning  of  August, has traditionally been a busy one for me. So with many of the COVID restrictions lifted, this year was going to be no exception.

My plans were to be at the  Autodrome Granby  in Quebec (Friday 30th July ) Brockville Ontario Speedway (Saturday 31st July ) Cornwall Motor Speedway (Sunday 1st of Aug) and the Merrittville Speedway ( Monday 2nd August). To add to this I had a wedding to attend on Saturday afternoon, before going the Brockville.

Friday arrived and it was off to Granby from my home in Cornwall at about 1-30 pm.

After about 125 kms of driving,  soon after turning off the A30 down the 104 towards St Luc , my Impala lost all transmission and came to halt.

To cut a long story short , it had to be flat-bedded back to to Seaway GM in Cornwall, 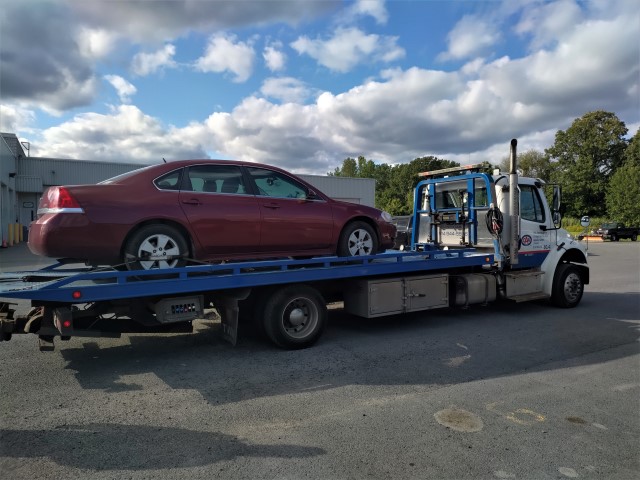 Because it’s a long weekend, it wont get looked at until Tuesday, so I’m yet to find out the fate.

My buddy Ron Morin has let me use one of his vehicles, (his Chev Silverado truck) for the time being. 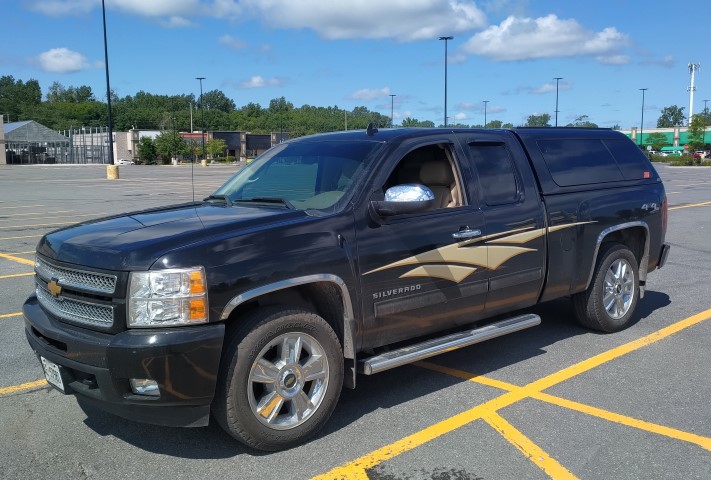 It was a Friday night at home again, sitting on my porch listening to the races , just a mile away at the Mohawk International Raceway NY. 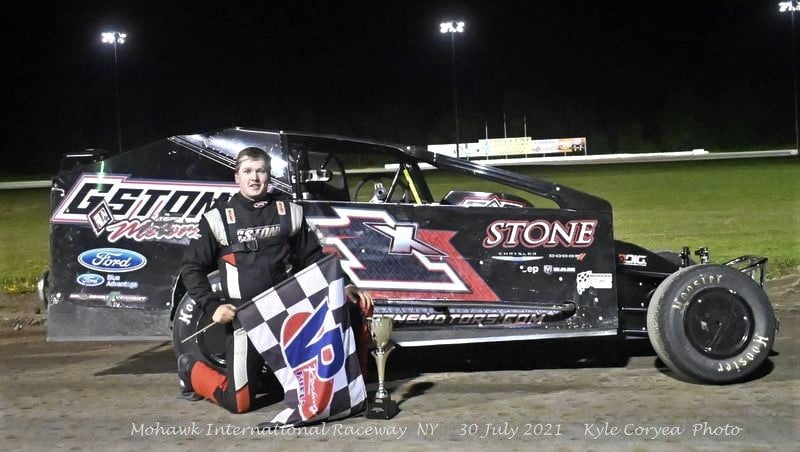 Once again Kyle Coryea kept me up to date and sent me a Victory Lane shot of the winner. Justin Stone, son of former track champion, Todd.

On Saturday it was the wedding of Ron’s grand daughter Jenay who I have known since she was a kid.

Here’s a few memories from over the years 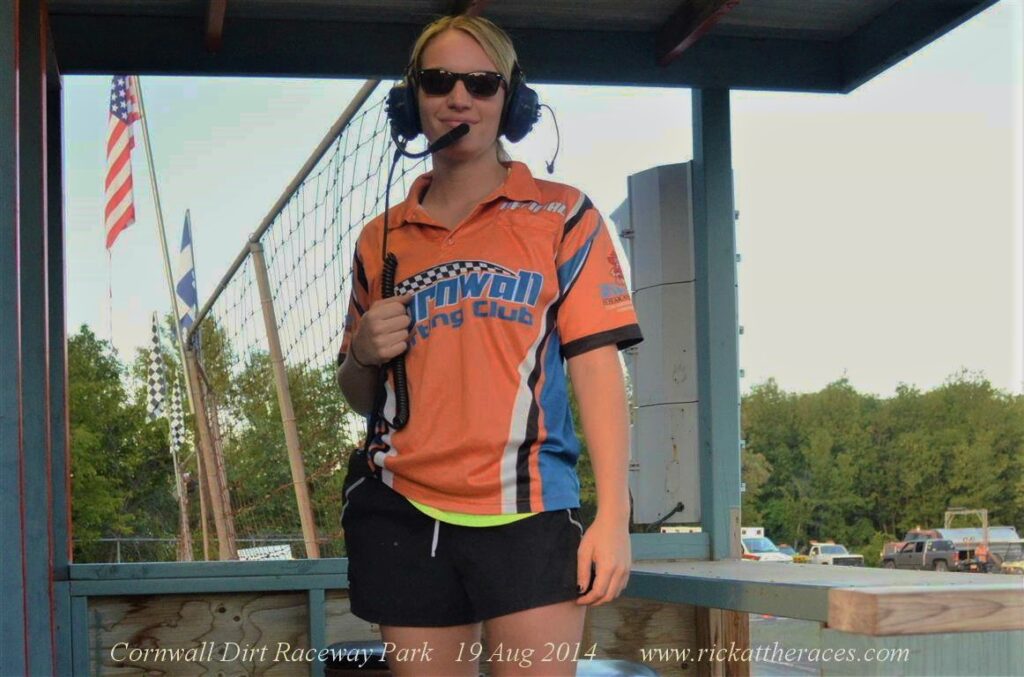 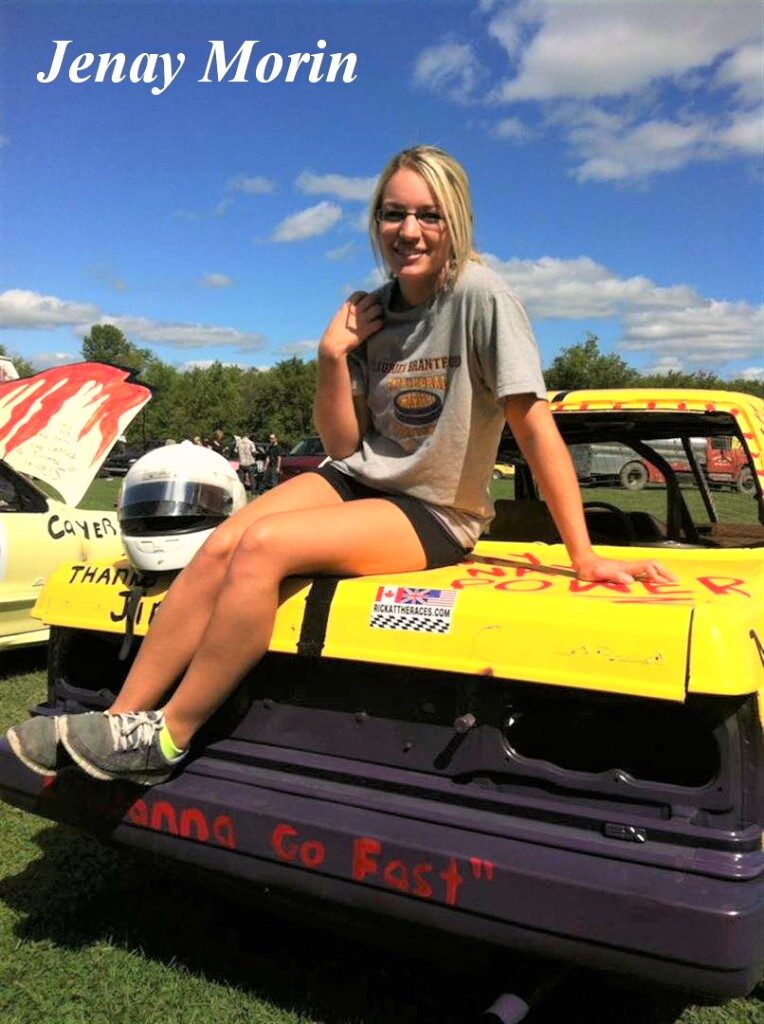 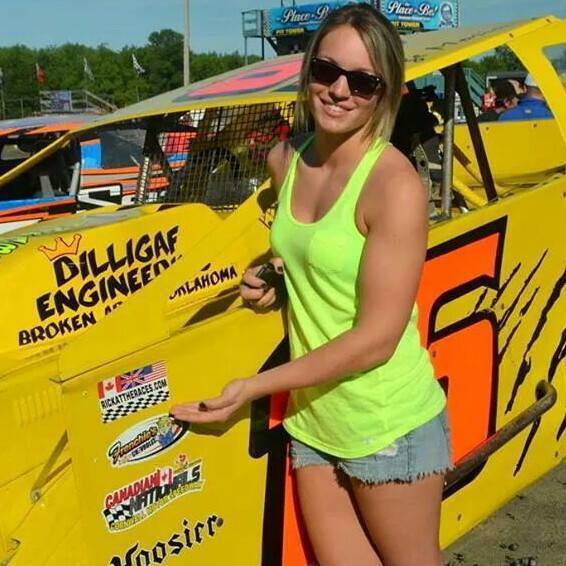 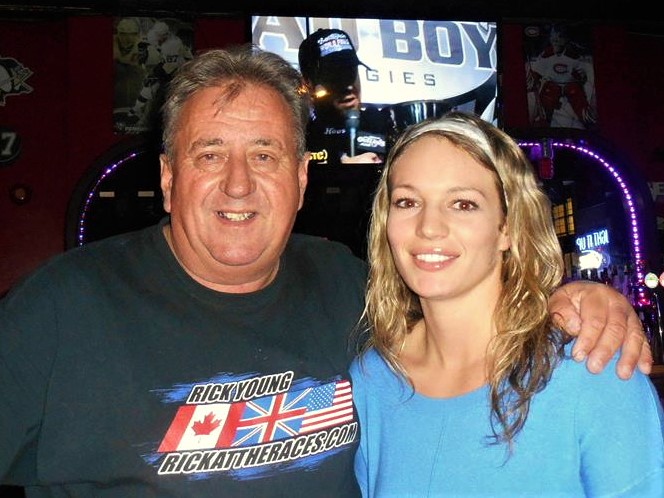 As you see by the pictures , she’s been involved in racing for a long time, always supporting her racing brother Gage,

On Saturday she was marrying Josh Forester. Congratulations to you both.

The weeding was taking place on the grounds of Ron’s house , that’s located beside the Cornwall Motor Speedway, the track that he used to own for about 40 years. 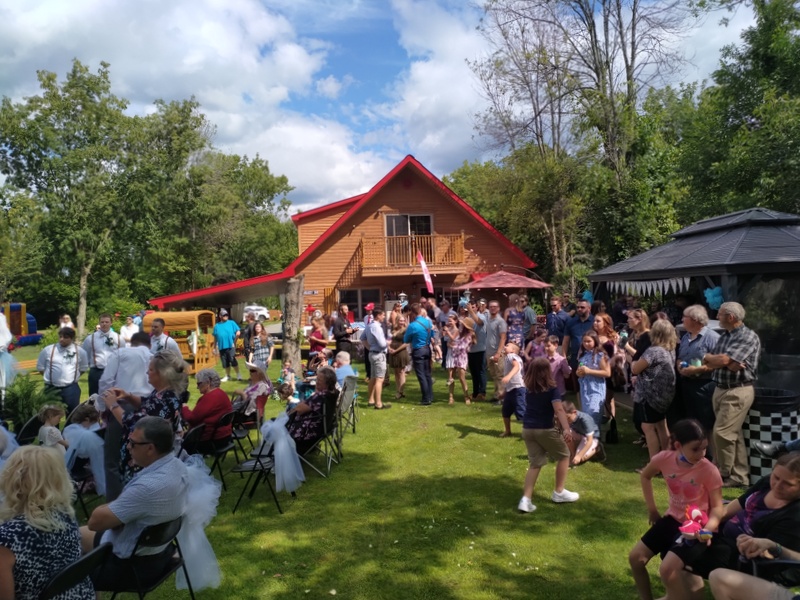 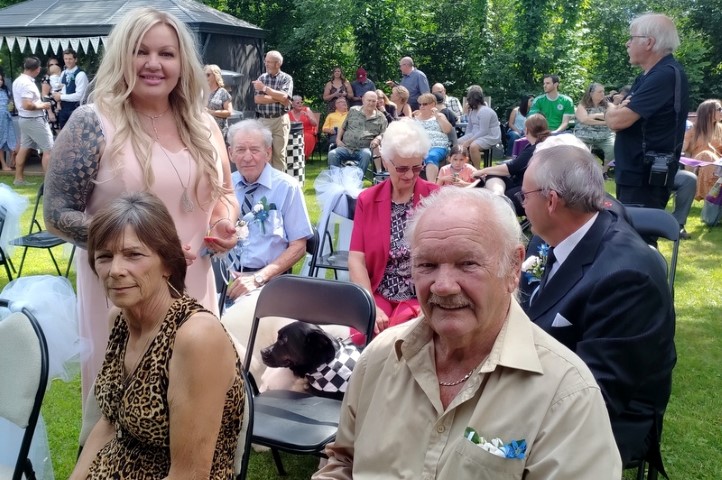 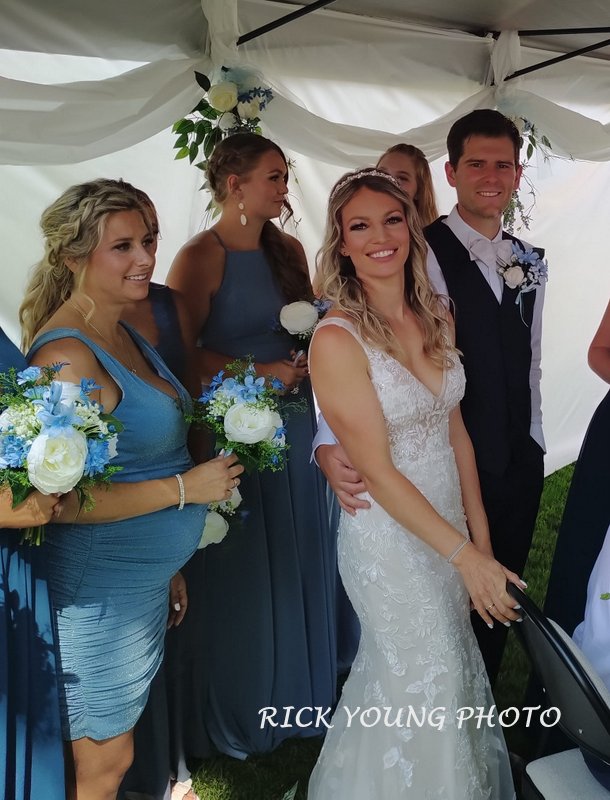 My photographer buddy, Don Simpson was there to take the quality pictures for the couple. Portrait pictures are his specialty and he was taught the art at the Algonquin College in Ottawa. 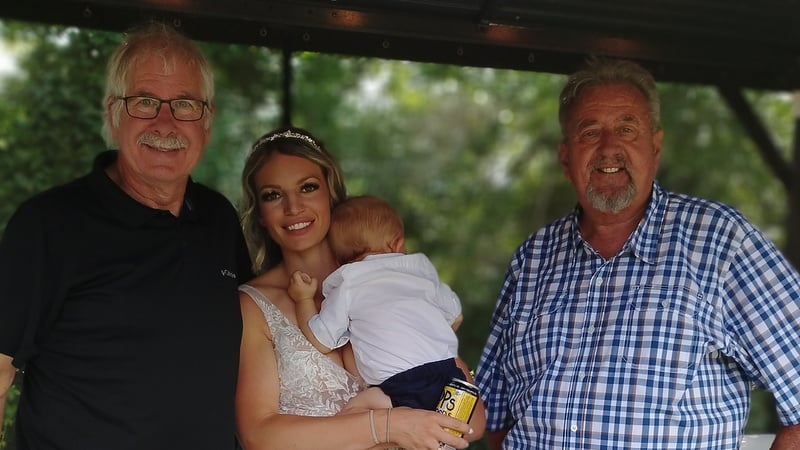 After the ceremony , Don and I were accompanied by Ted Lesage (the Cornwall Motor Speedway  tech man) as we headed off to the Brockville Ontario Speedway in Ron’s truck.

We arrived at the B.O.S a little bit later than normal, because of our prior commitments , but were there just in time for the start of hot laps.

There was no wandering around the pits, it was straight out on the middle, and cameras out. 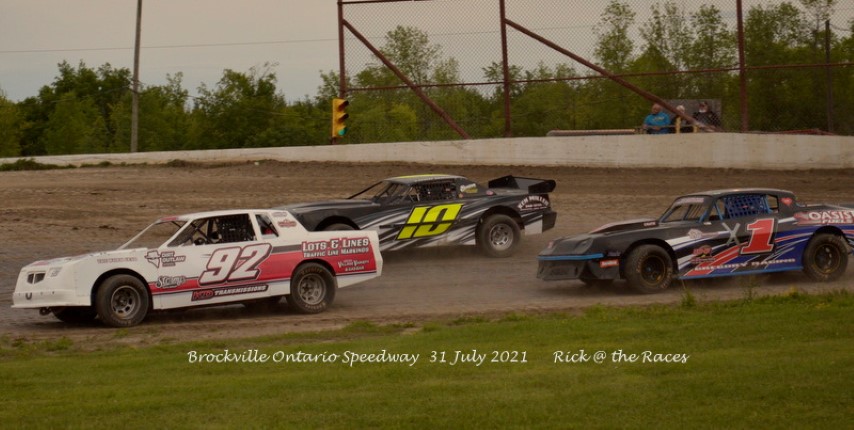 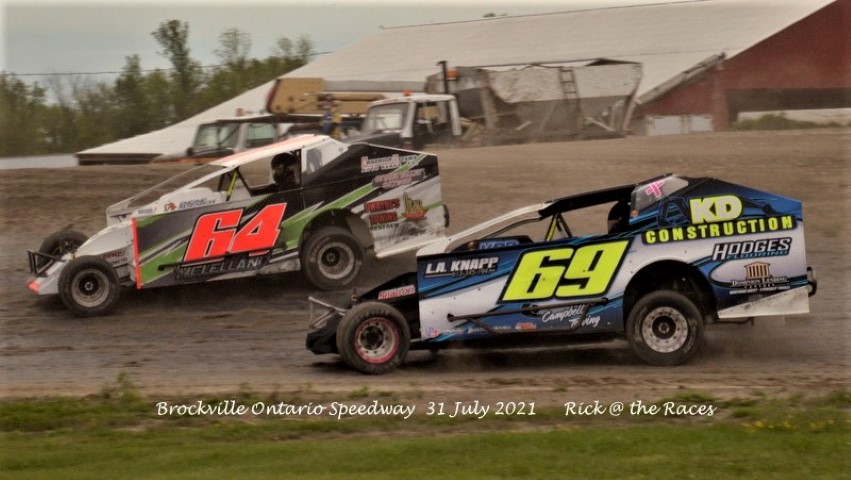 Little did we know, that we would be staying there for the rest of night, It soon became evident on the weather radar, that a lot of rain was expected sometime after 9-00 pm.

There were , also two ‘catch up’ features from the rained out event of the previous week. 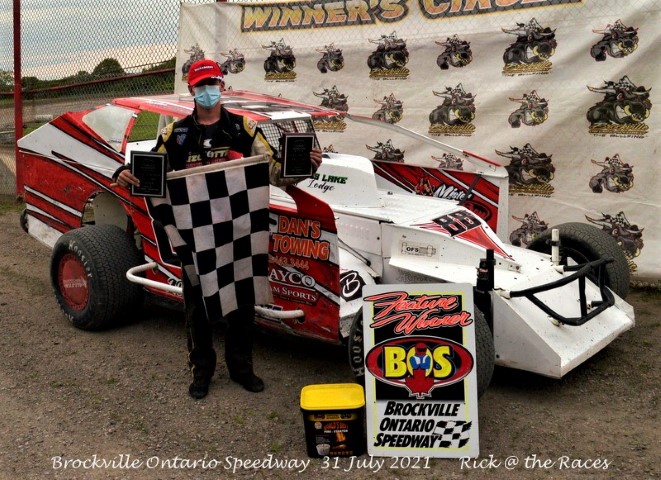 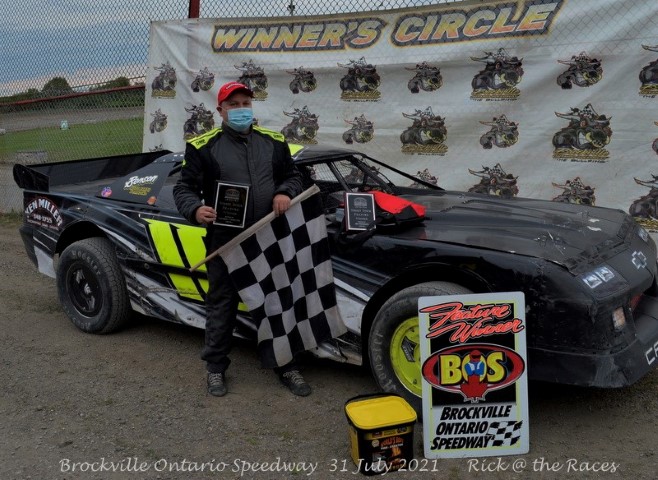 These took place before the regular heats,, and the first one for the Rookie Sportsman went to Justin Cyr and the second one, for Street Stocks to Todd Raabe.

It was after the heat races, the expected rain became a concern and the odd spot could be felt.  Race Control decided to cancel intermission and get straight on with the show, minus the Victory Lane ceremonies. It was ‘bang, bang , bang’ , lets get on with it and try to beat ‘Mother Nature’ ( just like Cornwall, the previous week). 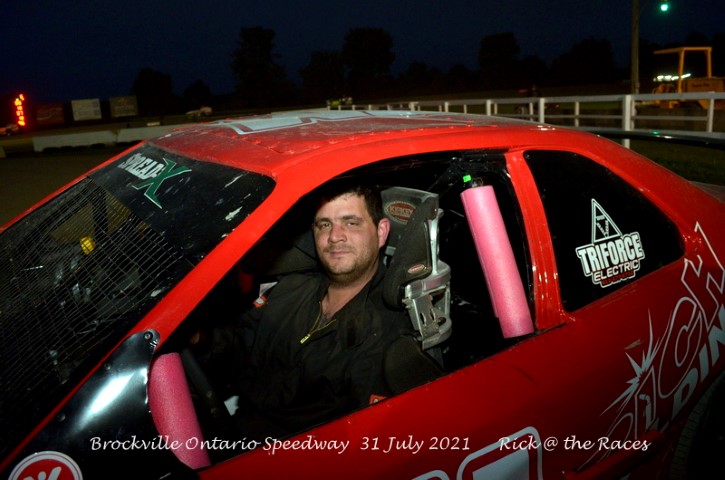 First up was the Mini Stocks, which was won by Dan Cook. 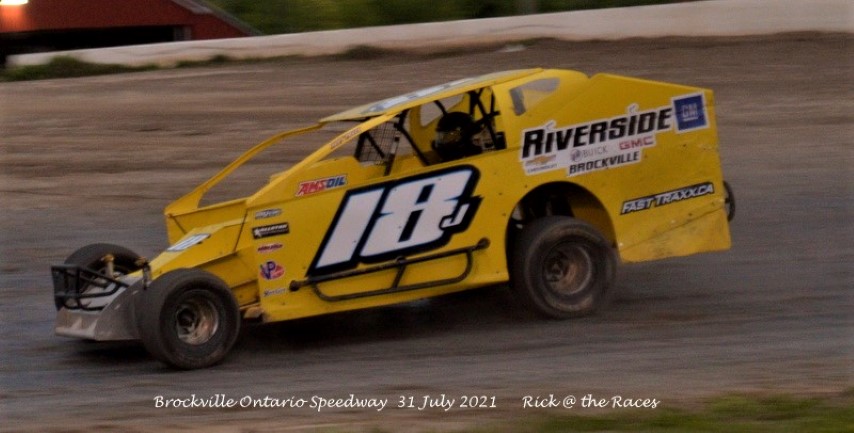 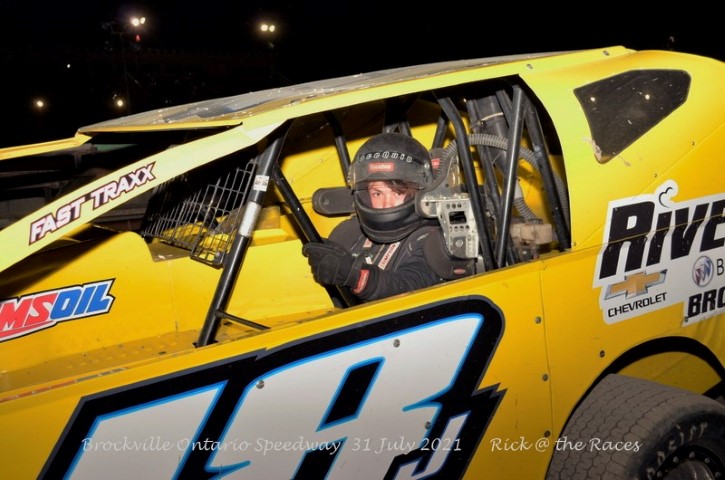 This was followed by the Rookie Sportsman, which was won by a new name to me, Jordon Wood from nearby Brockville. 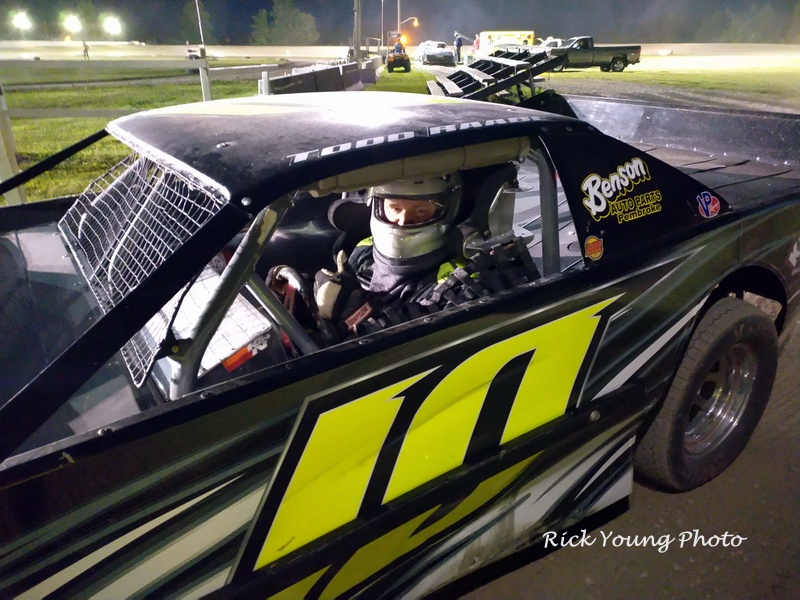 In the Street Stocks Feature , Todd Raabe got the checkers for the second time that night.

As the Sportsman entered the track for their feature it was spitting with rain even heavier , and the clouds were getting darker, so I started to pack away my camera.

Thankfully the rain was quite light, and all it did was keep the dust down, so the camera was out of the bag again before the end of the race. This gave former modified driver Bobby Herrington another win.

The light rain had finished by the time the Modifieds were out for their 50 lap Ogilve Series race, and it turned out to be a good one.

As expected Ryan Arbuthnot made the early running with Brian McDonald by his side and chased hard by Chris Raabe and Kyle Dingwall. As McDonald dropped back, Dingwall eventually worked his way past him and Raabe. For the last five laps we had a great duel between him and Arbuthnot for the lead. 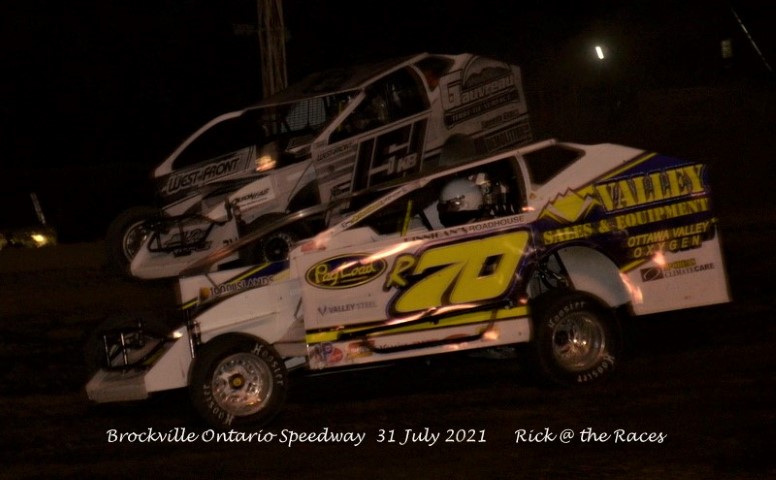 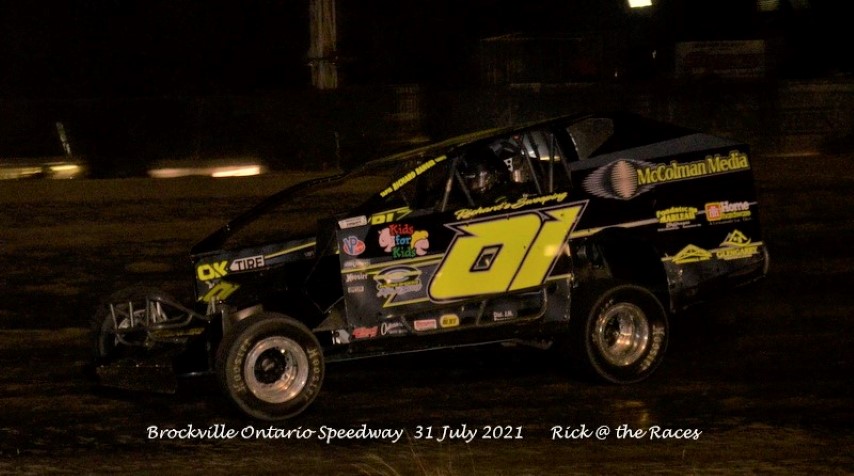 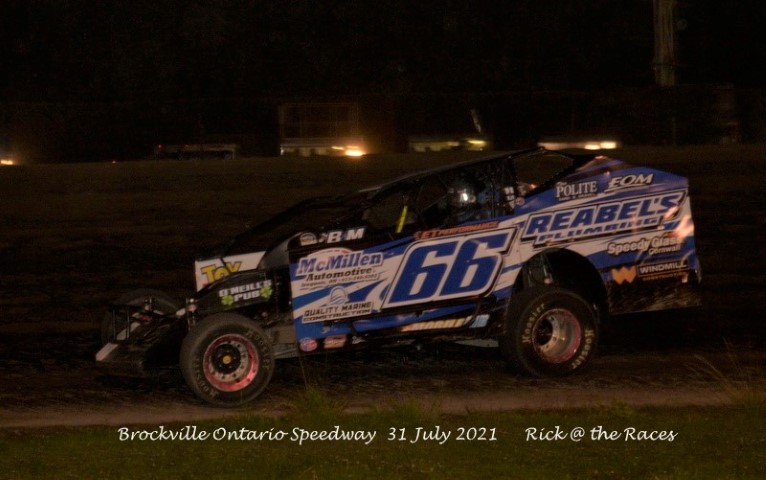 As they crossed the line it was Dingwall by half a cars length.  What a great race. 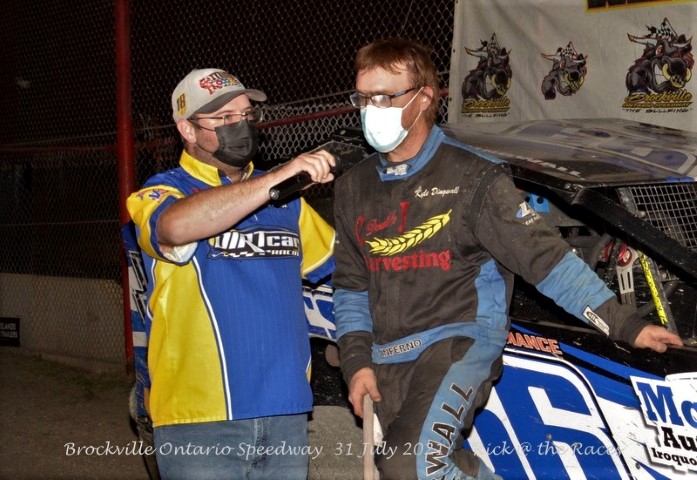 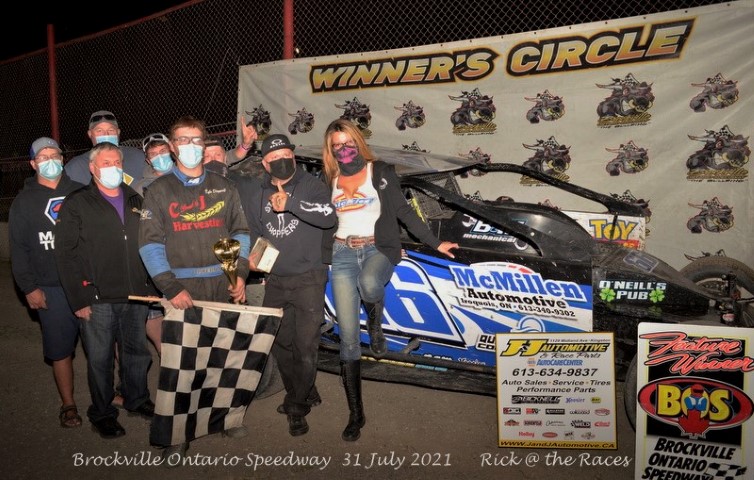 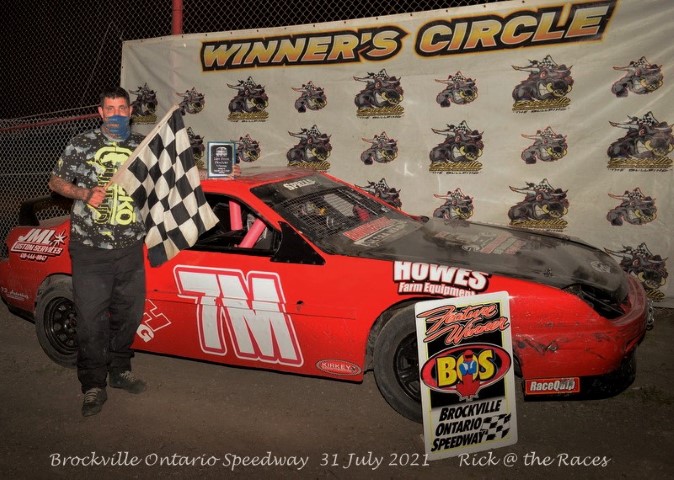 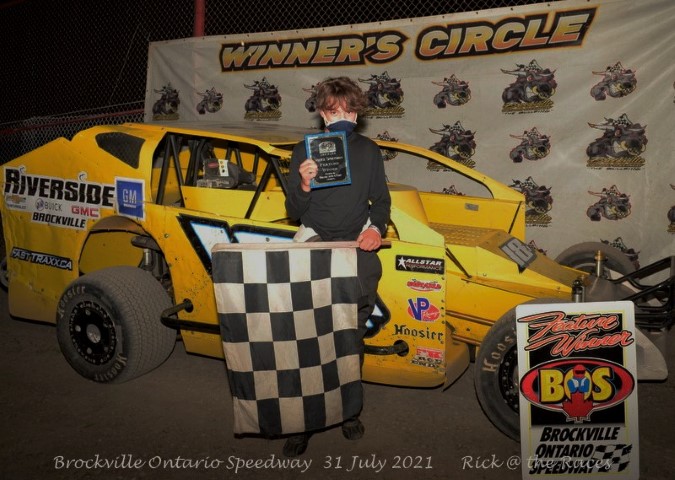 With no rain in sight, the belated Victory Lane ceremonies were taken.

The stress and activity over the past few days must have caught up with me, as I over-slept on Sunday morning and missed the start of the Live TV coverage of the Hungarian Grand Prix.

When I turned the TV on at 10-30, I was expecting to see the final laps, but no, it wasn’t even half way through.

The young Frenchman, Estaban Ocon was leading in the Alpine -Renault. I’d missed a first lap pile-up that had taken out the leading contenders. Ocon went on to get his first ever GP win.

Rain had been forecast for much of the day in the Cornwall area , so it was no surprise when I received the cancelation notice from the Cornwall Motor Speedway.

My original plans of four events in four days on this Long Weekend got decreased to just one. With no car of my own to use , I decided to shelve my plans for Monday and the six hour drive to the Merrittville Speedway.