Last weeks Blog ended on the afternoon of Monday the 25th of July ,

After a heavy schedule of weekend  racing , I’d decided to miss the Canadian Big Block Series at Autodrome Granby that night , and was also a bit uncertain whether to do the Autodrome Drummond event on the Tuesday,

Well I talked with my buddy Don Simpson and we both decided to ‘go for it’ and make the Tuesday night trip up to the Series race.

We’re both glad we did , it turned out to be a night to remember.

As usual,  promoter Yan Bussiere put on a great show with all the fireworks and razamataz .

The place was packed. 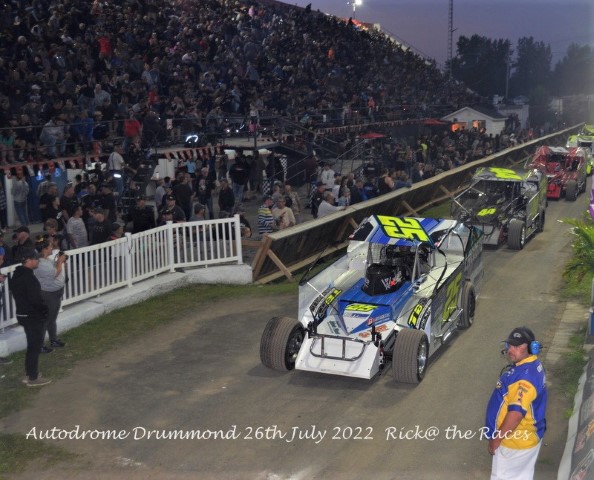 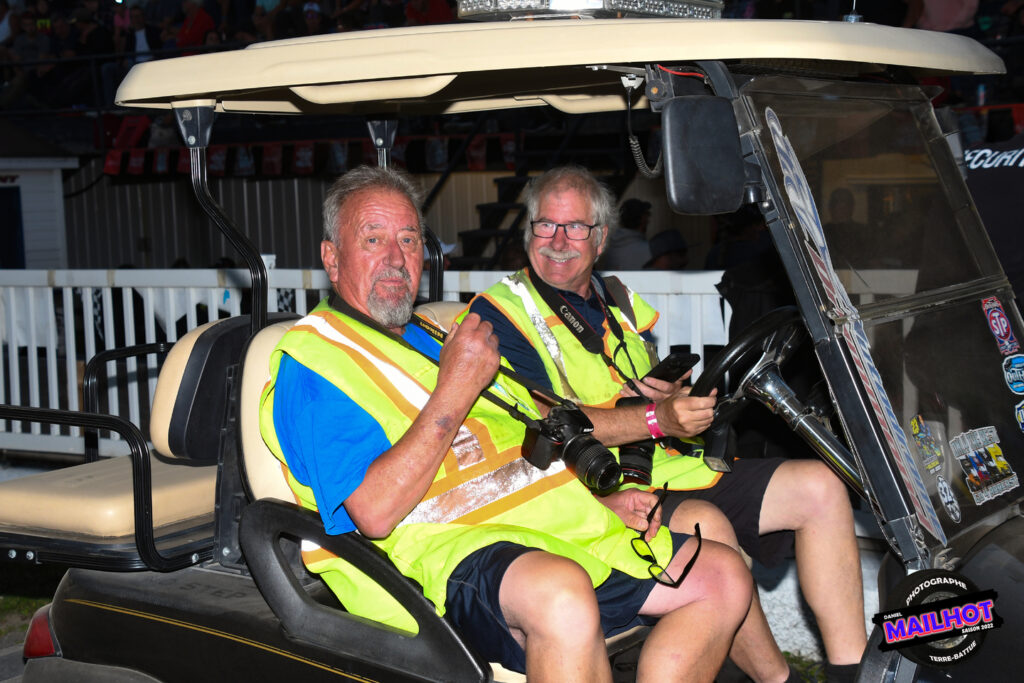 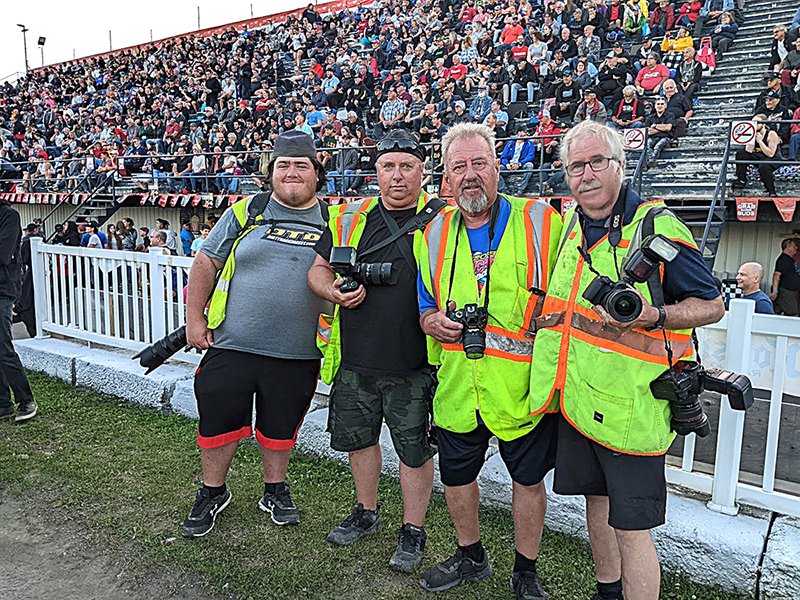 The Big Blocks were stars of the Show, and they were joined by Sportsman , Lightening Sprints an Slingshots. 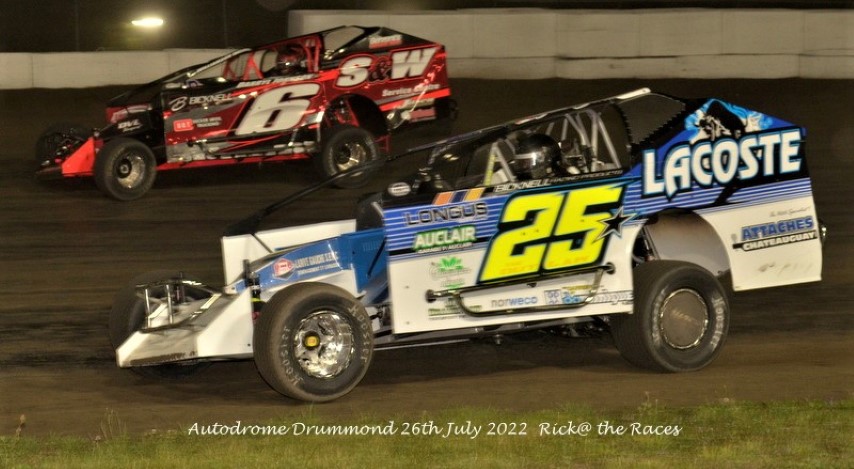 The big race turned out to be an epic

Six laps from the end of this 75 lapper , it looked all set for another one of Quebec’s ‘same old,  same old’ with another run away victory for David Hebert.

With just a handful of laps to go, the Hebert car suddenly slowed on turn two,  and pulled off the track with some kind of mechanical failure. The fast chasing Michael Parent, Yan Bussier and Mat Williamson , all went for the opportunity to capitalize.

Williamson made a sudden duck to the bottom and got ahead of Bussier and Parent. They both tried in vain to pass ‘Money Mat’, but to no avail . He charged a head for the remaining laps to take a popular win. 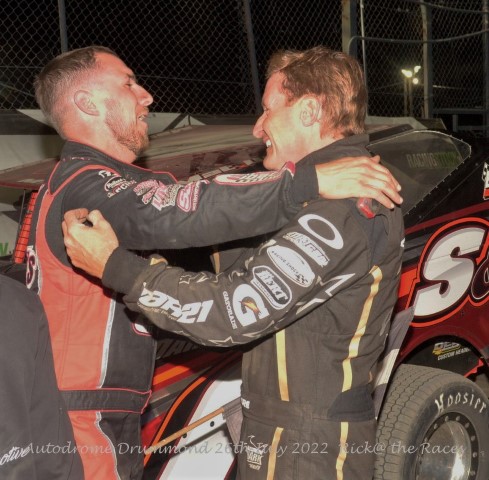 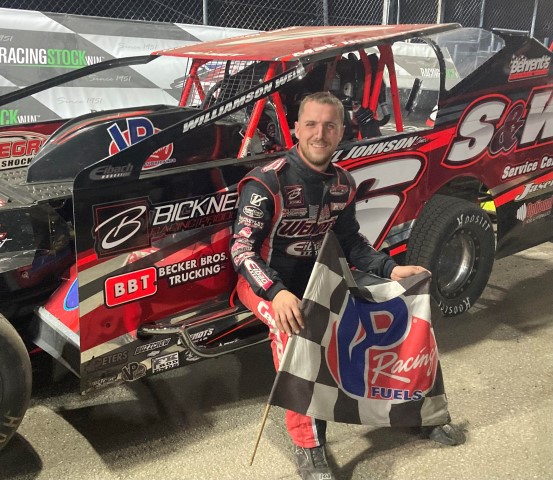 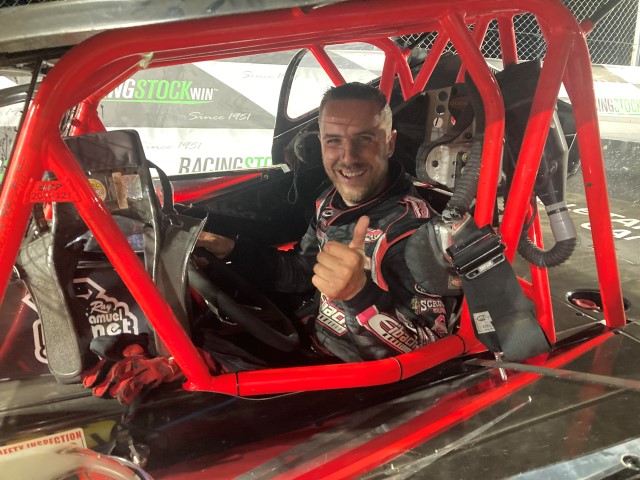 His second victory in two days as he’d also won the race at Granby the night before that I had missed..

The Sportsman feature was yet to run, but Don and I made a quick exit straight after Victory Lane pics , to avoid the traffic jams getting out and a late night home.

On Thursday the 28th of July,  I was hoping to be at the Mohawk International Raceway but a late afternoon rain storm caused a cancelation.

Friday the 29th of July was a big day for me. I mentioned in previous Blogs that another car would be coming my way, so here’s the story .

During the mid 1970’s, while I was living in England , I would regularly make trips across the North Sea to watch stock car racing in Holland. My usual destination was the Baarlo Auto Speedway near Venlo.

The track was run by the late Jac Van Claes and his N.A.C.O organization. Jac was one of the best promoters , I’ve come across, anywhere in the world.

In the winter of 77/78 he visited the USA and while he was there  he purchased a 1978 Ford Thunderbird. It was then shipped back to Holland where he had it transformed into his iconic Pace Car. 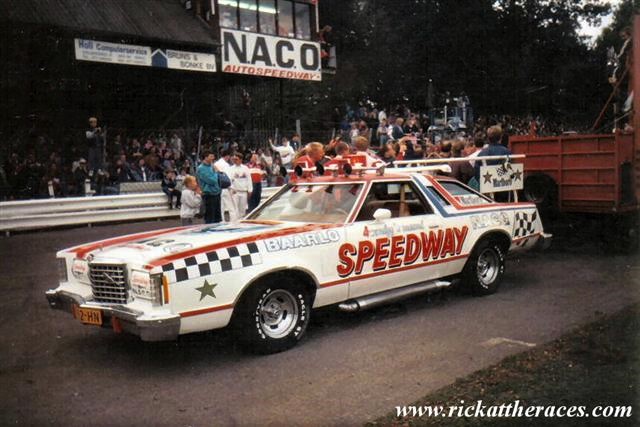 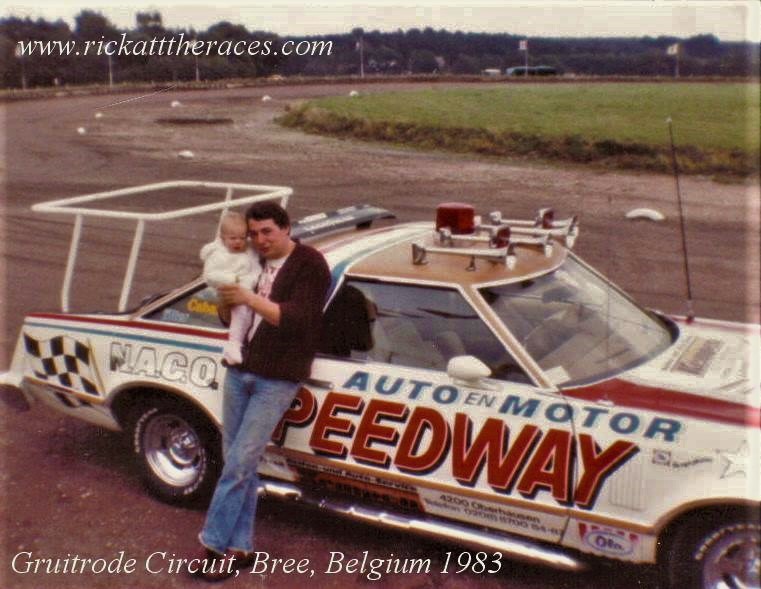 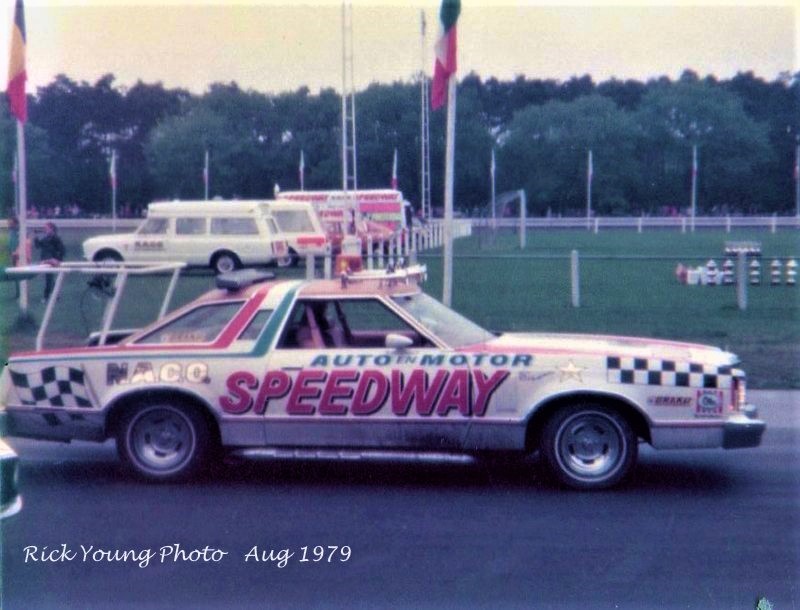 I first saw it at the Long Track World Final of 1978  and fell instantly in love with it. I always dreamed of having one just like it some day.

One of the pictures above shows my baby daughter Carla being cradled by my old mate Stan Cole beside it at the Gruitrode track in Belgium.

Thanks to Mat Gulikers of the Dutch Stock Car Museum in Maastricht for the back ground info on Jac’s T Bird.

On Friday the 29th of July , my good friend Ron Morin accompanied me  to Napanee where I bought it . 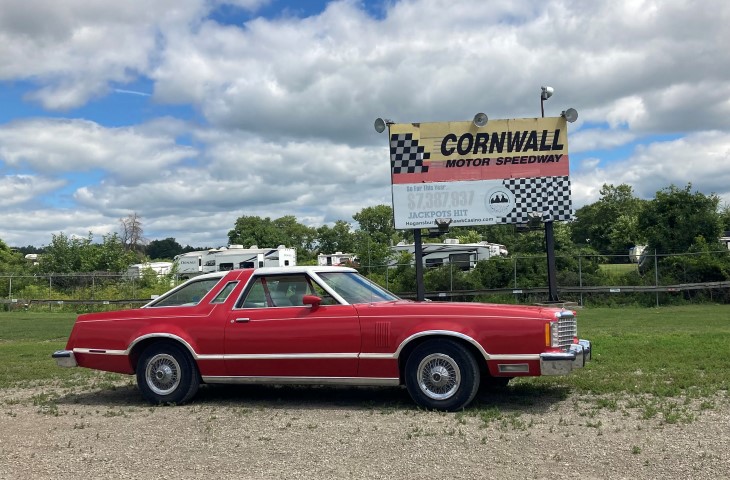 It’s now back in Cornwall where I’m the proud owner of a 1978 Thunderbird.

On Saturday the 30th of July I was at the Brockville Ontario Speedway for a regular night of racing.  Modifieds , Sportsman , Rookie Sportsman and Mini Stocks. 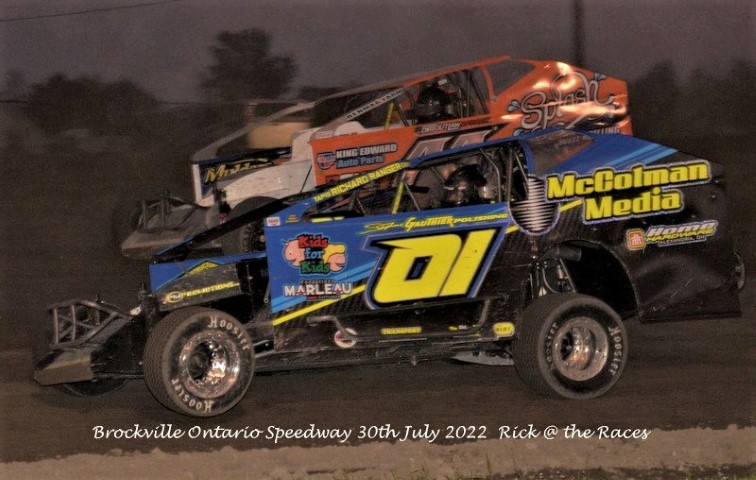 The program went very smoothly with no major delays, and was all over by 10-00 , which was just perfect for me.

The high light of the night was seeing Lee Ladouceur and the Jim Primrose team get a win in the Modified feature. 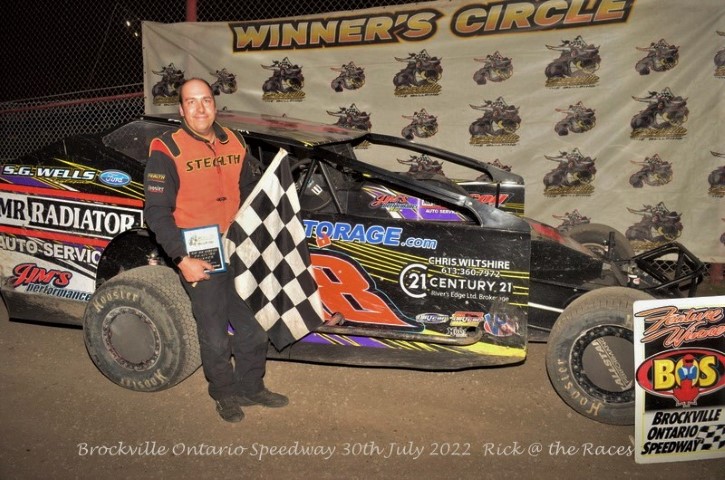 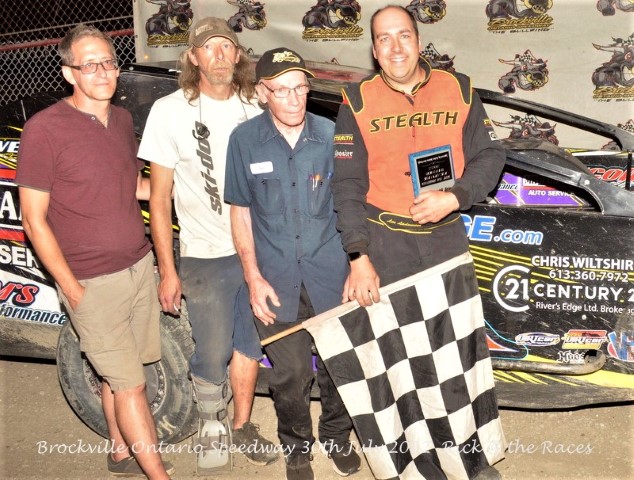 It’s been a while. 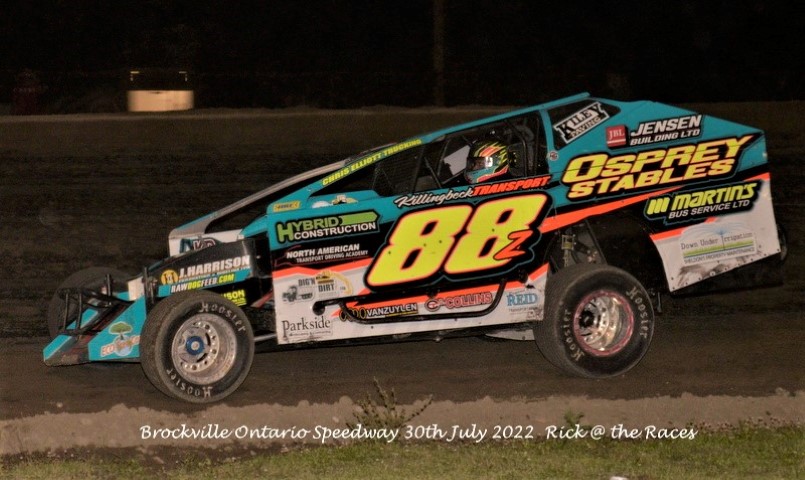 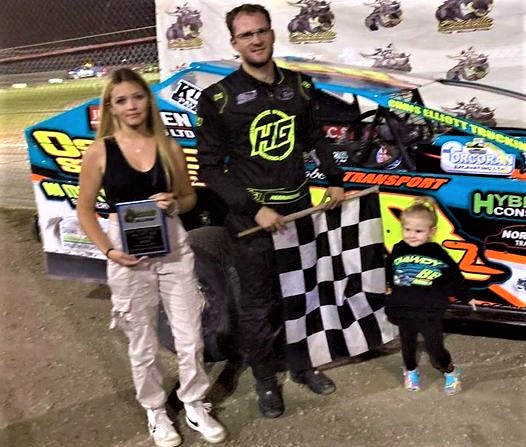 Bobby Herrington got another win in the Sportsman. 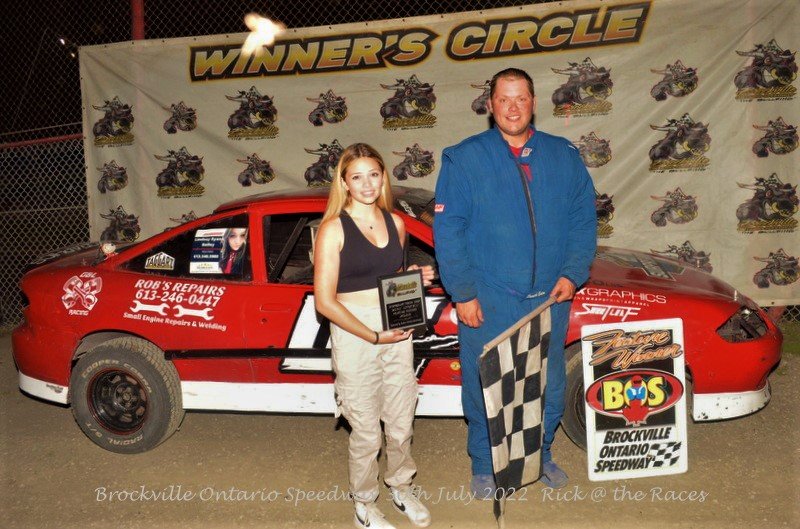 Sunday the 1st of August was spent with a breakfast time viewing of the Hungarian Grand Prix, live on TV . This gave Max Verstappen yet another win in the Red Bull.

Sunday afternoon and evening was spent across town at the Cornwall Motor Speedway with a full program of Modifieds, Sportsman , Pro Stocks and Mini Stocks.

They were all extended lap races and ‘on paper’ , it looked like a long night …. and it was !

The first feature was for the Mini Stocks and that was run before the intermission. 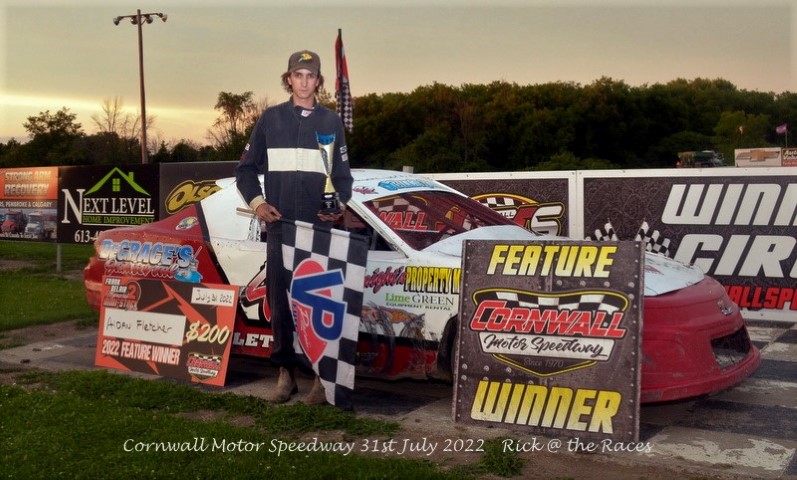 We had an interesting new winner in this one when Brighton Speedway ‘invader’ Aidan Fletcher took the checkers.

After a bit of track prep the 35 lap Pro Stock event  got under way.

There were over 20 cars in attendance and with all the cars being allowed to take the green, the inevitable cautions took place.

Eventually things settled down and the last portion of the race produced some good battles for the lead. 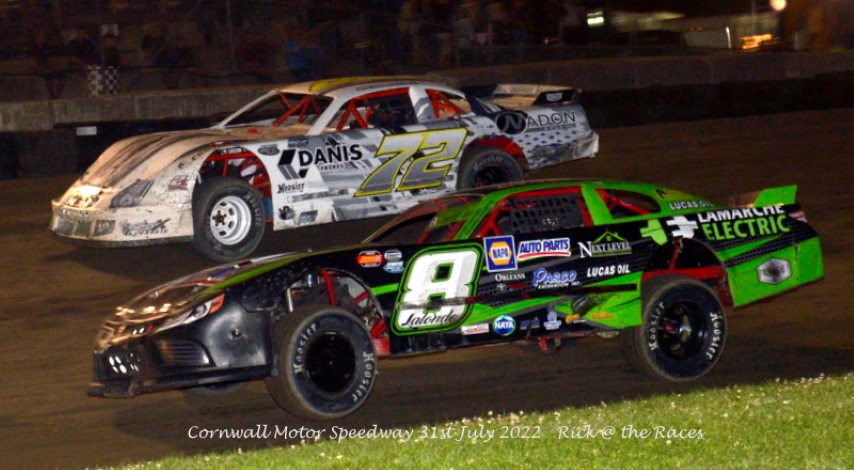 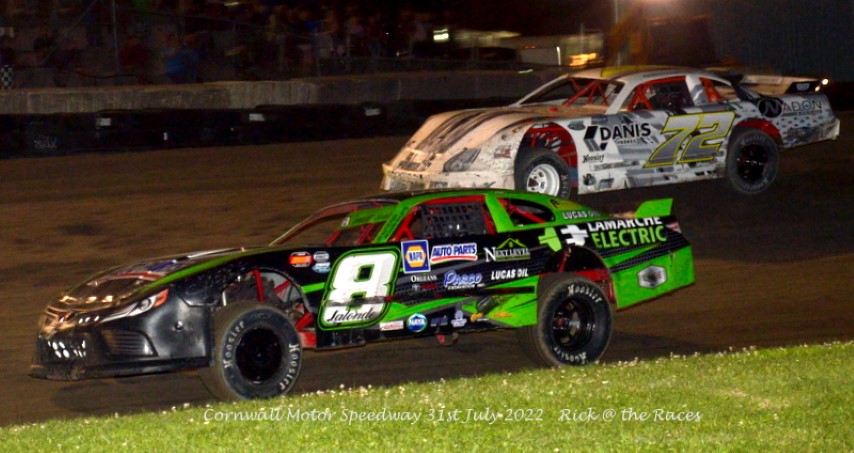 Bruno Richard got the better of Marc Lalonde to earn himself another win.

The 100 lapper for Modifieds came next and this turned out to be an expensive one for many drivers.

A big wreck on the front stretch involving more than seven cars, brought out the reds.

Thankfully no one was hurt but sadly some of the cars were totaled.

After the restart,  it was good steady race with few cautions all the way to the checkers. 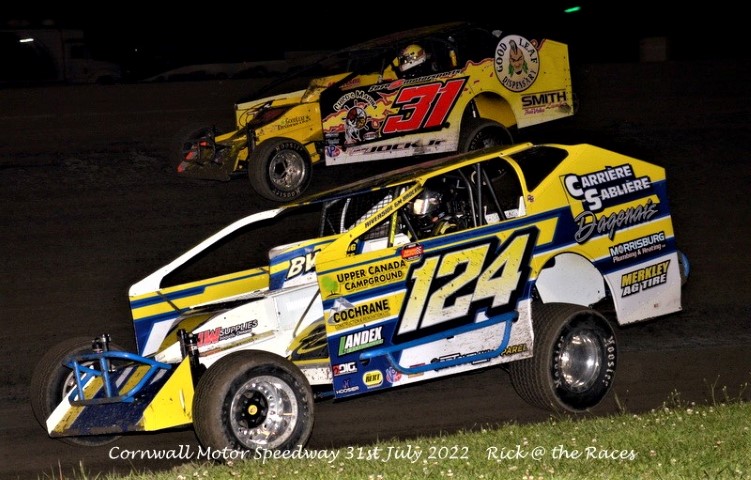 Luke Whitteker dominated the race but was pressured in the closing laps by Chris Raabe.

It was a memorable night for my buddy Luke, his partner, Taya the Whitteker family and all the Pierre Dagenais team.

I’ve known Luke for many years , so I had to crash his Victory Pics.

Thanks Don Simpson for the pic.

The last race of the night was the 50 lapper for Sportsman, which thankfully did the distance without too many cautions. 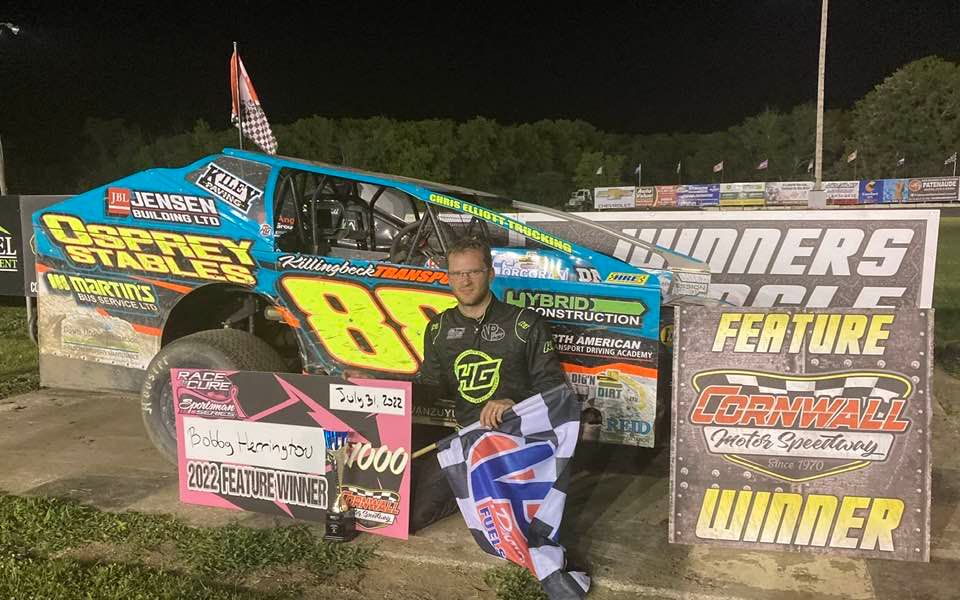 It was now after 11-30 pm when Victory Lane ceremonies were done, and not the ideal time that I was hoping for. By the time I got home, and did a bit of editing , it was into the early hours.

Plans for my usual  six hour morning drive down to the Merrittville Speedway in the Niagara region , for its  traditional August Monday races had to be shelved.