This weeks Blog begins on Wednesday the 3rd of August, when I left home in Cornwall, Ontario at 7-45 am in my Chev Impala .

By 8-00 am I was across the border into the US , heading towards my daughter Carla’s place in Willow Springs , North Carolina.

If things had gone to plan , I would of got to her house before mid night, but unexpected delays while heading south resulted in an overnight stop in Fredricksburg , Virginia.

Long construction delays on the I 81  near Binghamton NY  , then again in the Pennsylvania mountains where it was closed at Frackville due to an accident . The road closure delayed me for nearly two hours and I had to take a 20 mile detour . so I ended up arriving at Carla’s on Thursday morning.

Her husband Alex, had an event to attend in Florida, with his brother, so for most of the weekend , it was just Carla,  me and my grandkids , Benji and Sophia, 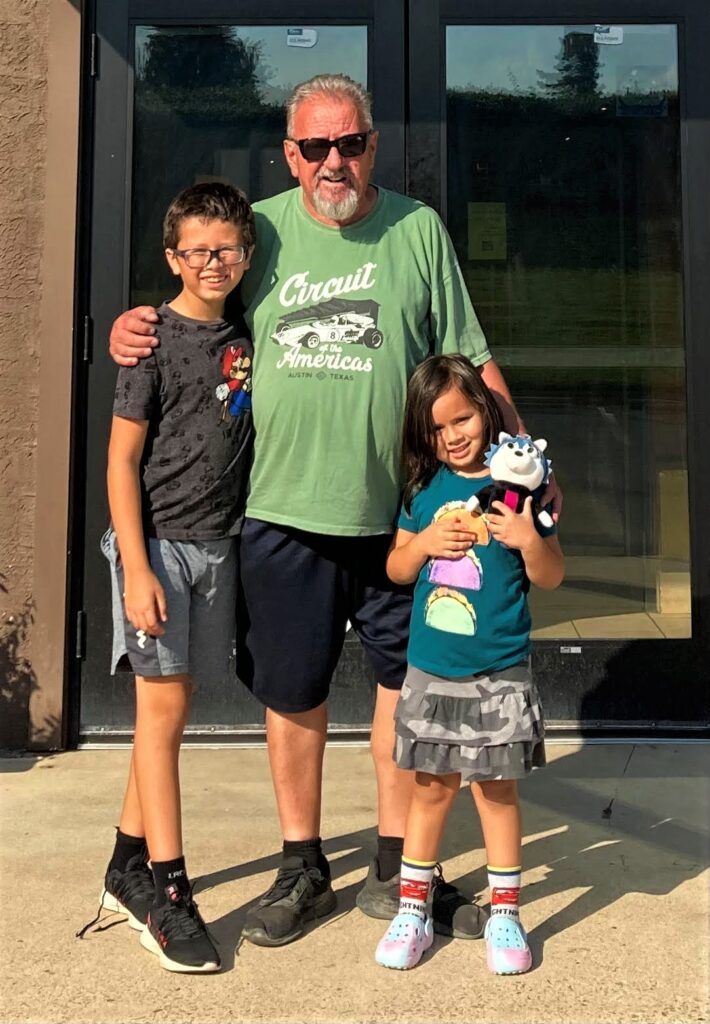 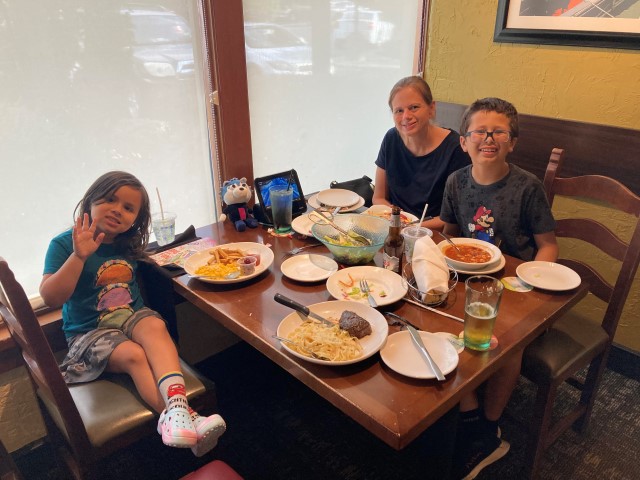 That night we all went out to the Olive Garden for supper.

The kids are still at school down there, as they have a different system for holidays as to the norm in other places.

So , grandad took them to school in the Impala on Friday .

My plans for Friday were to attend the Wake County Speedway in the evening . It’s a NASCAR sanctioned paved track and it’s located only a 20 minute drive from Willow Springs on the outskirts of Raleigh. 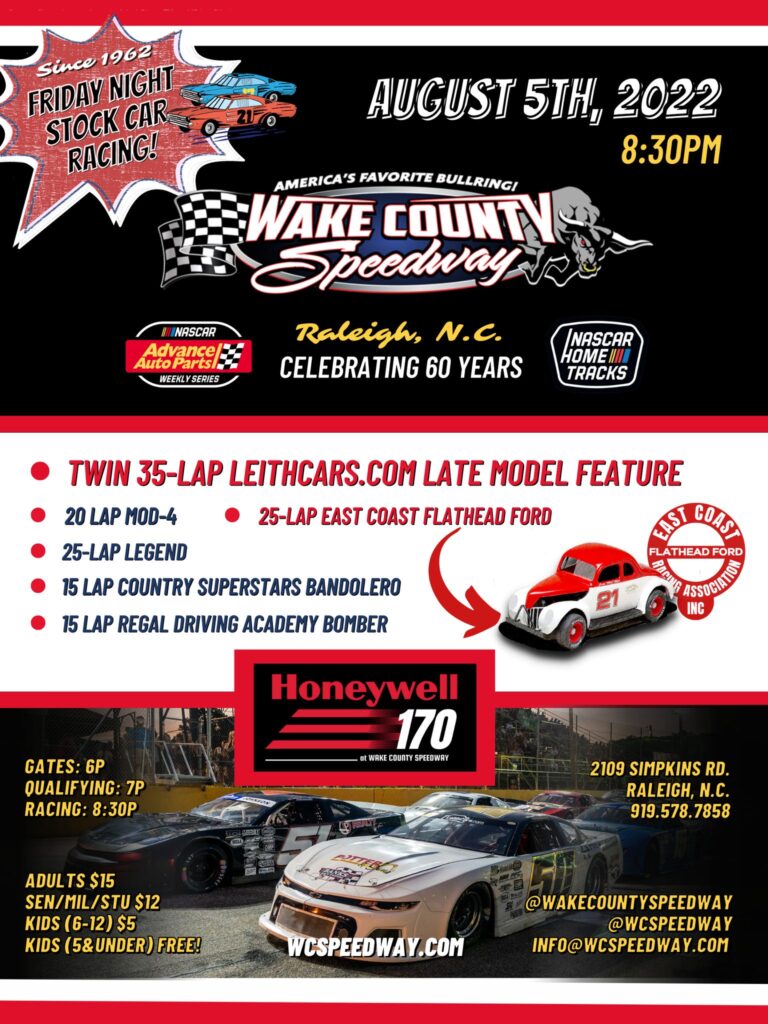 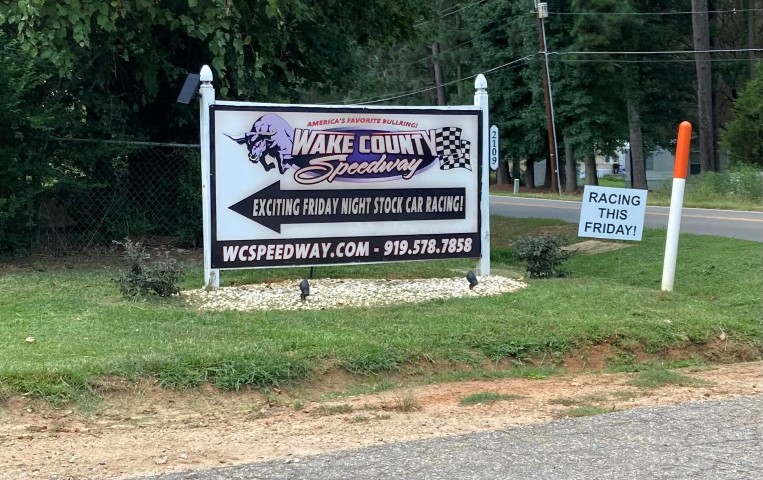 Carla works out of her office at home, so after lunch I took myself on a little drive to catch some of the afternoon practice.

I then headed to nearby Fuquay-Varina to buy some spare parts for my newly acquired  Ford Thunderbird .

After that , I returned to Carla’s for a few hours before making the short drive back to the Wake County Speedway. 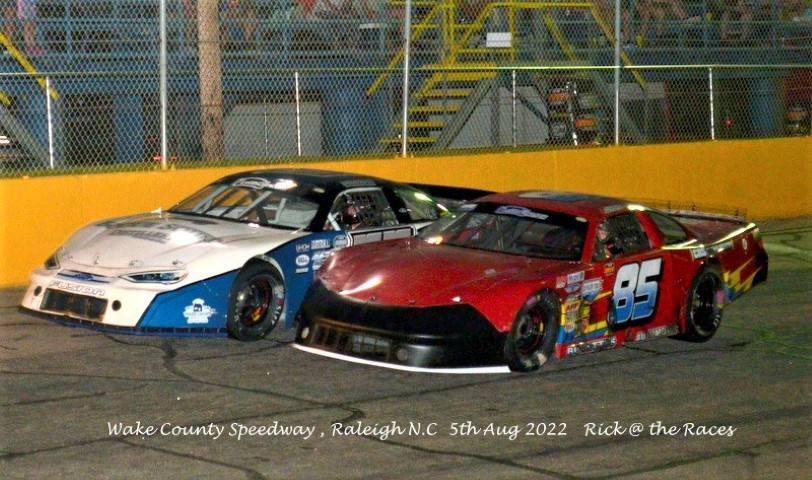 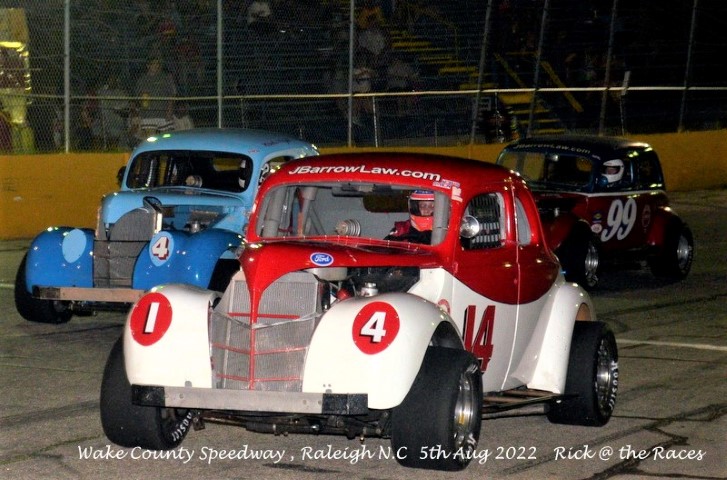 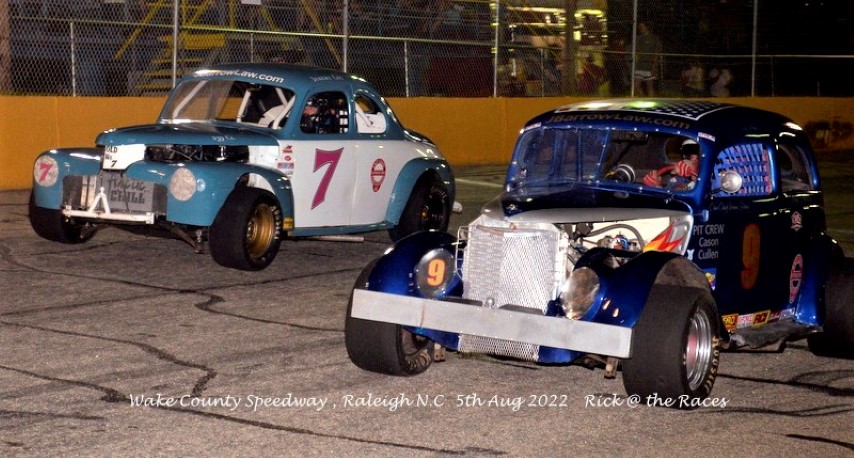 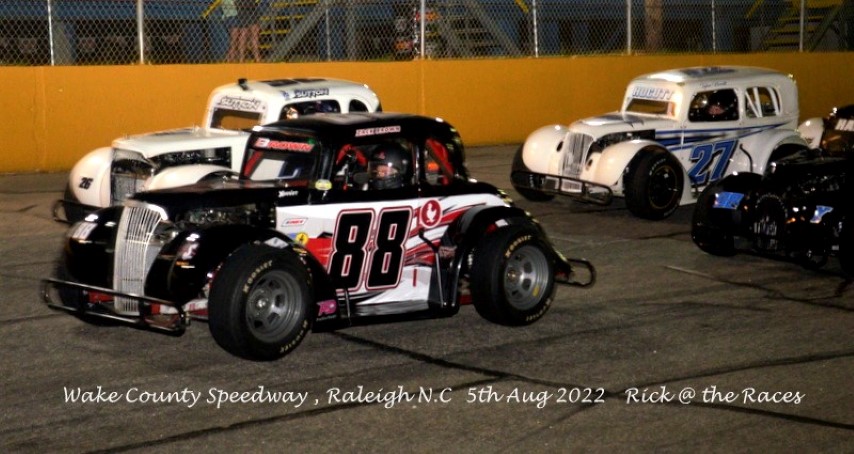 My favorites for the night were the Flat Heads.

The first feature was a 35 lapper for the Late Models. 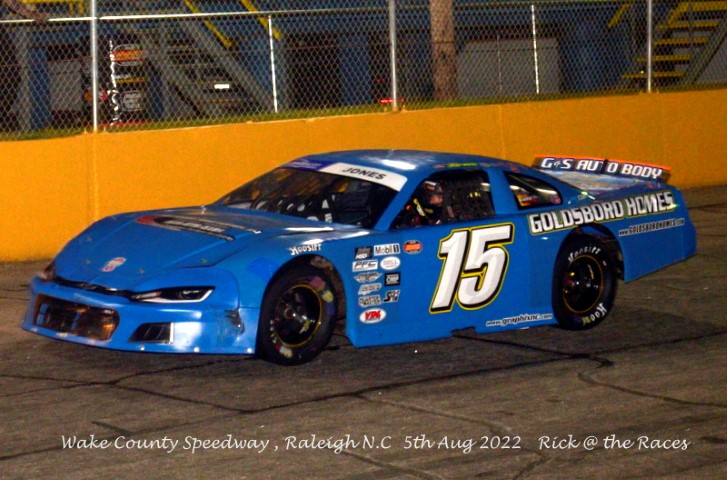 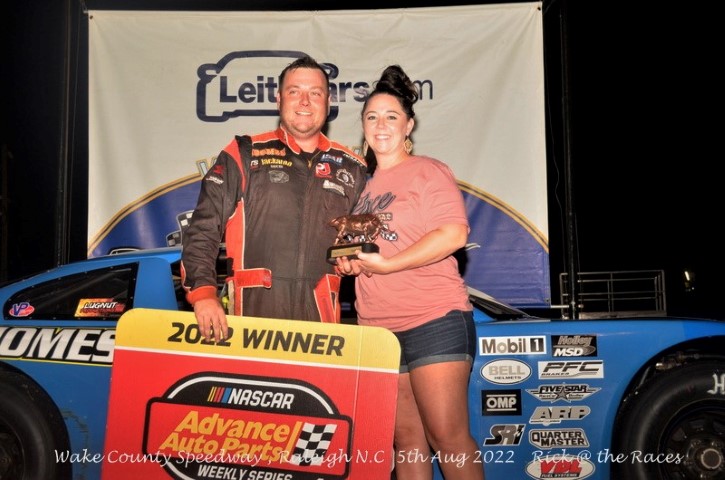 That was won by Clay Jones # 15 who led for most of the race.

Next up was the 15 Lapper for Bandoleros. 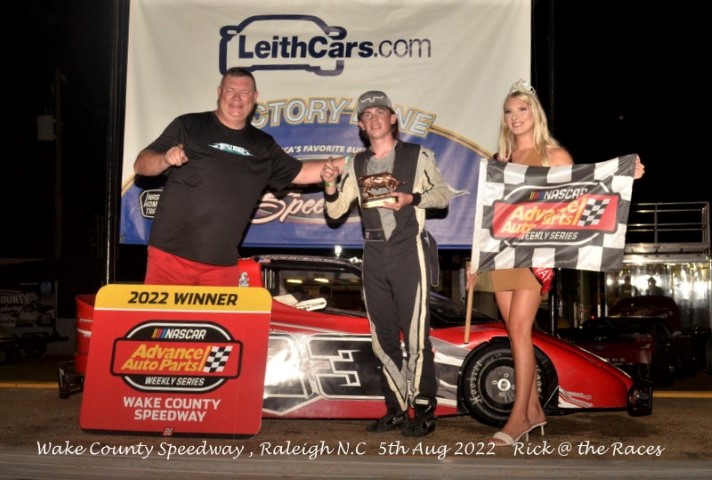 The 25 lap Legend Feature followed this and was won by Carson Haislip.

By now , I couldn’t help but notice pretty ‘Miss Wake County Speedway’ , who was doing a great job with the Victory Lane presentations. 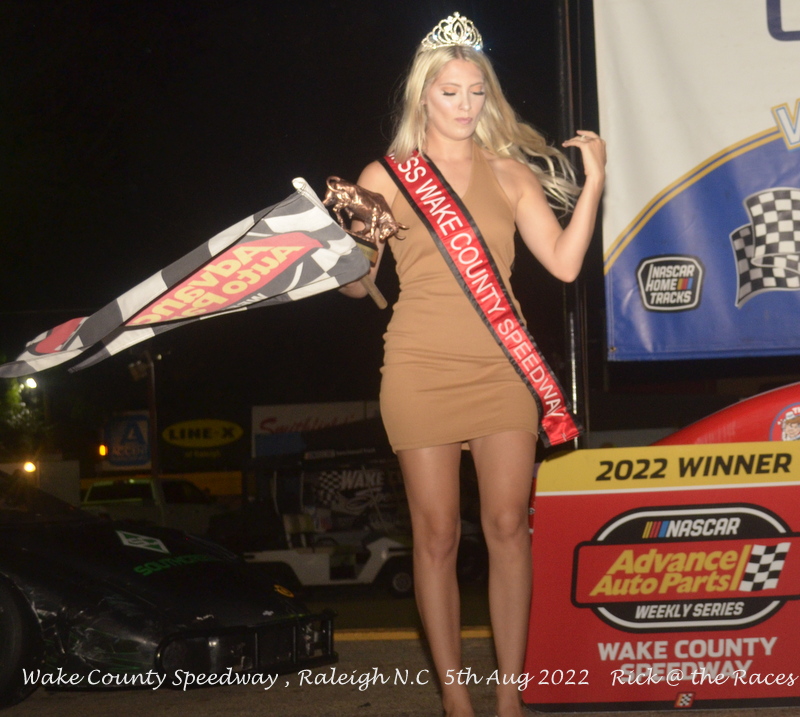 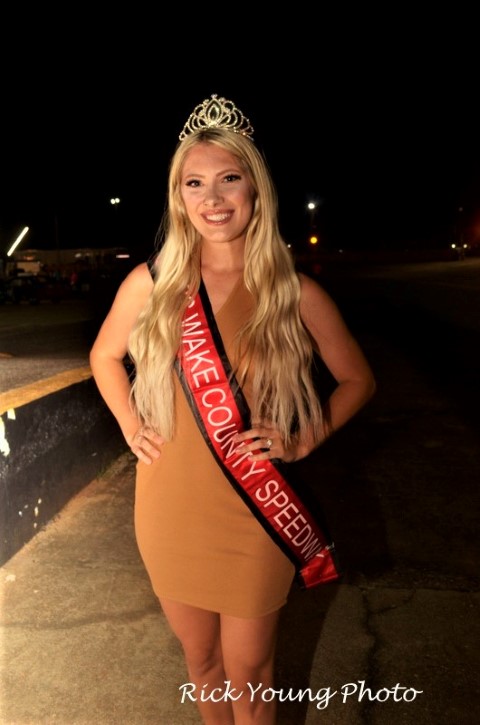 The feature race that I’d been looking forward to was next, the 25 lapper for the ‘Flat Head Fords’ . 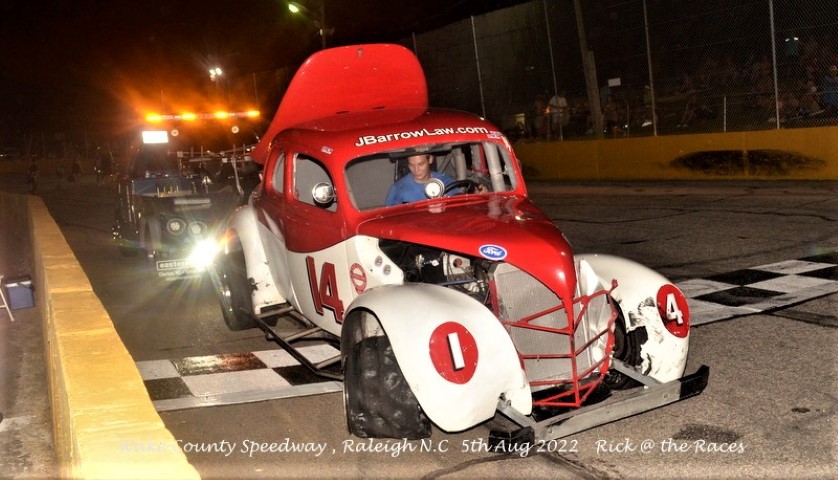 Unfortunately , there was a big wreck during the first part of the race and the red flags were brought out .

Two of the cars failed to make the restart. 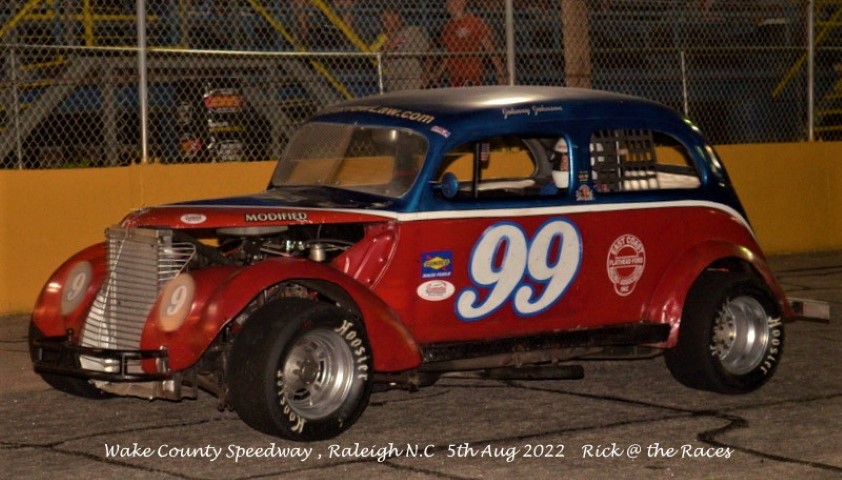 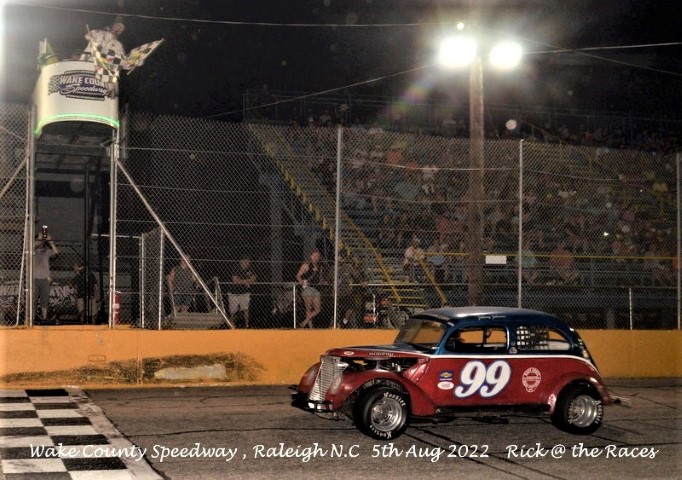 When the race resumed , it was 82 year old Johnny Johnson # 99 who took the checkers.

Yes, I really enjoyed myself at the Wake County Speedway, and it became track # 247 on my TRACKCHASER totals.

The Bomber feature was next , but I chose to make my exit, in an attempt to beat the traffic leaving the track at the end of the night.

I was soon back at my adopted North Carolina ‘home’ in Willow Springs supping a nice cold Yuengling Lager that I’d picked up on my drive down on Wednesday.

From when I left home on Wednesday, the weather had been scorching hot, and it got even warmer the further South I got.

Our plan for Saturday was a trip to the Wrightsville Beach near Willmington.

It’s about a two hour drive and we took Carla’s AUDI.

Before  getting settled on the beach we dropped by to see the warship,  US North Carolina for a Rick @ the River photo shoot. 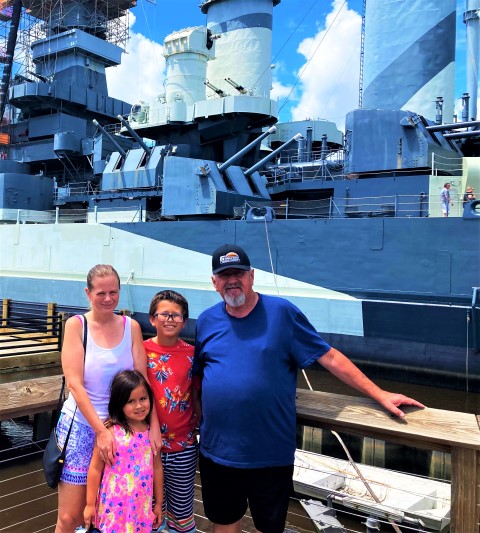 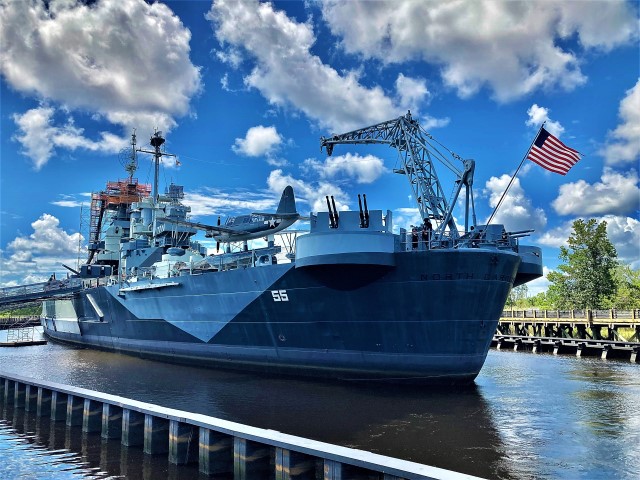 I’d been there before , back in 2016 while I was on a racing road trip with my buddy Ron Morin.

From here we headed to the beach , and as you can imagine , it was a night mare trying to park the car.

We eventually found a spot to park and spent most of the afternoon on the sand and in the water. 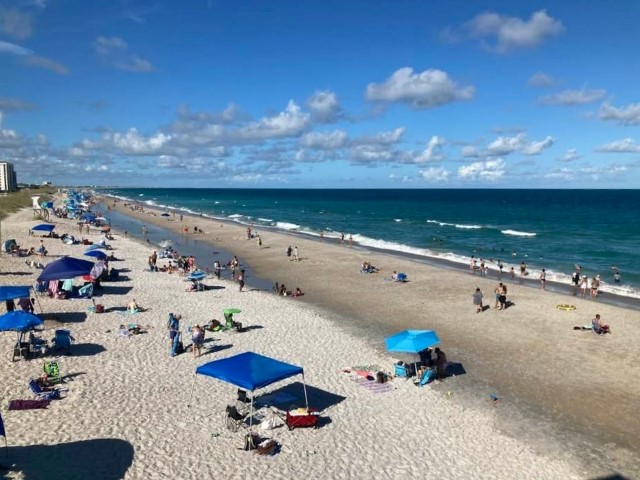 Oh boy, I didn’t know the Atlantic Ocean could be so warm.

Our Sunday was a lazy day, and I spent most of it around the house before we all headed out for supper at the ‘Abbey Road’ Diner in Fuquay Varina. 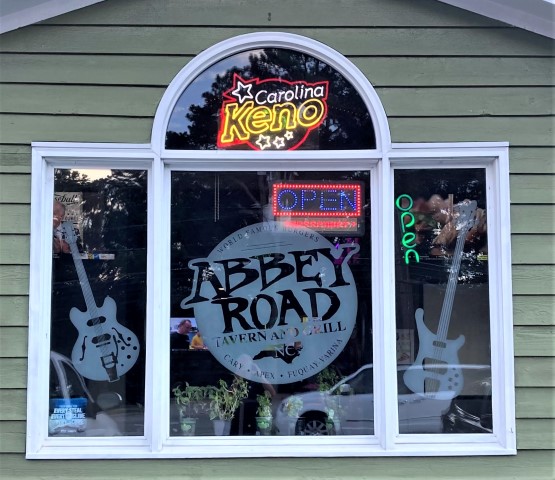 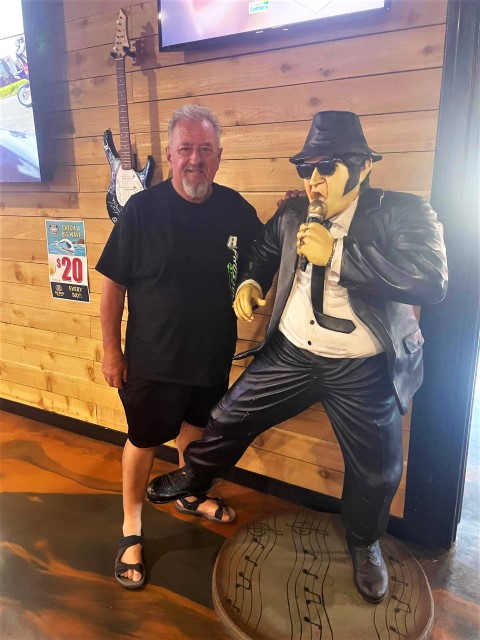 That was a cool place , and the food was good too.

At about 8-50 am on Monday morning  , just after Benji and Sophia had gone to School,  I set off on my homeward bound journey.

On a distance of this kind , you never know how things will turn out, so you have to be prepared for what ever may occur .

Things went well , unlike the outbound trip, and with the minimum of stops for gas , bathroom and coffee  , I was in Watertown , New York at 9-30 pm.

I was just two hours from home. So with a hop and a skip , I was soon crossing back into Canada at the Cornwall border just before mid night. Then I was at my place five minutes later.

While I was away , I obviously missed out on my local action .

It was a pity I had to miss the Big Modified race at the Airborne Speedway, Plattsburgh on Saturday night that Erick Rudolph won as well as Chris Rabbe’s win at the Mohawk International Raceway on Friday .

Also on Saturday night, the Brockville Ontario Speedway was running a regular show and the GP3R race in Trois Rivers was taking place to keep the Quebeccers entertained .

Tristan Draper was the B.O.S winner and  Sebastien Gougeon  took the honors in Trois Rivieres .

My buddy Don Simpson was at the latter as well as my good friend Chanty who took these pics at the Cedric Gauvreau Team hauler. 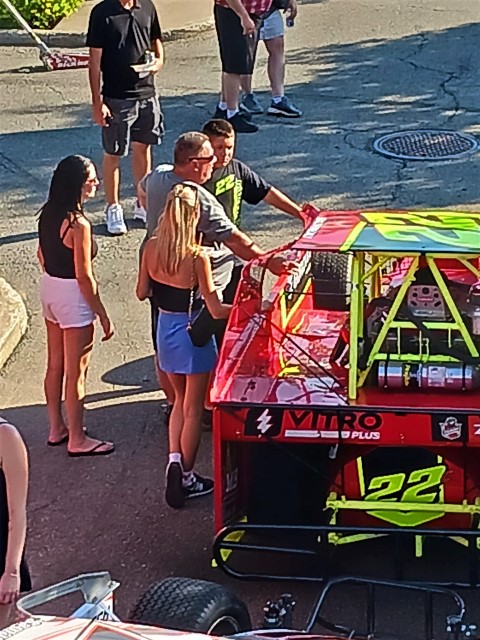 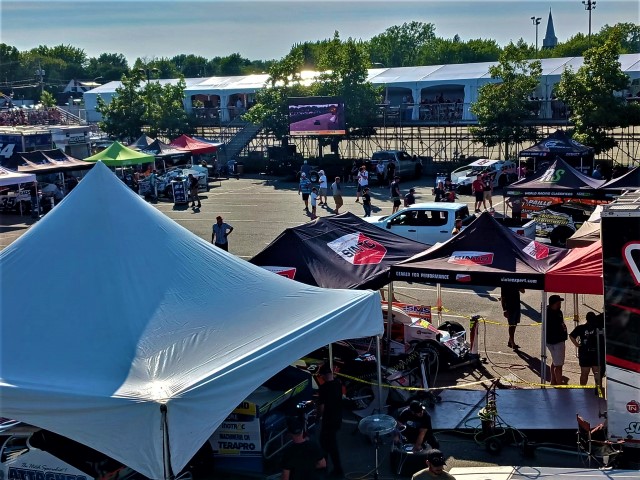 I must also mention , that the Sunday show at the Cornwall Motor Speedway , once again fell foul to the wrath of Mother Nature, when rain caused a cancelation.