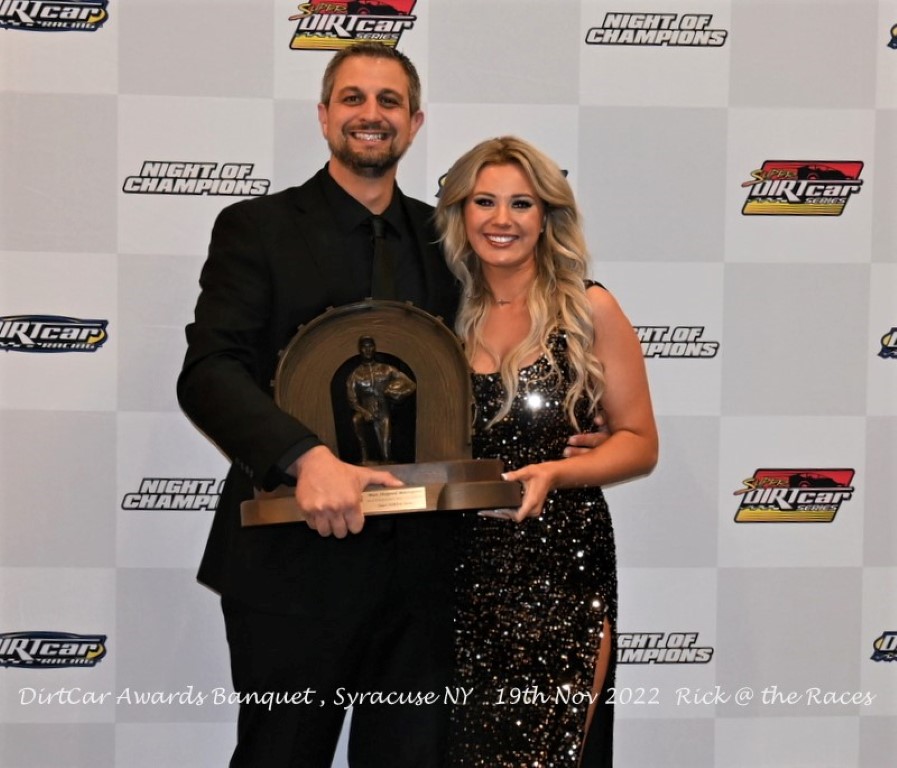 ‘Off To Syracuse’  WEEKLY BLOG

This past week end , I made my usual trip down to Syracuse NY, for a couple of events I always enjoy.

Starting on Friday the 18th of November and running for two days, it was the North East Race Parts show at the NYS Fairgrounds, and on the Saturday evening it was the Annual DirtCar Awards Banquet at the Ramada Hotel (Liverpool NY) .

Once again I had the honor of being invited by DirtCar to take some pictures.

My plan was to leave my home in Cornwall , Ont, early on Saturday morning and attend both events.

Unfortunately , the weekend happened to coincide with one of the biggest snow-storms in the area for a long time. The ‘Lake Effect’ as they call it,  occurs in the winter, to the areas surrounding Lake Ontario. Watertown NY and Buffalo quite often get dumped on with a huge accumulation of snow.

This was one such weekend. The severe weather warnings were in place for three days . About two feet of it fell around Watertown on Friday and it was heavy going for my friends that chose to travel down that day.

In the Cornwall area , we only got a slight dusting, and as I crossed the border at about 8-30 am on Saturday , I found Route 37 clear until I got to Ogdensburg.

Then it started getting bad. I must admit, I nearly turned round and headed home when I got to the village of Hammond, as snow fall and visibility got worse. I pressed on regardless and by the time I’d, got to Theresa I’d driven out of it.

From there I got on I81 and it was plain sailing all the way to Syracuse. As I passed Watertown you could see the large snow banks beside the road , from the day before.

I arrived at the NYS Fairgrounds just after mid day, and was soon inside at the Parts Show. 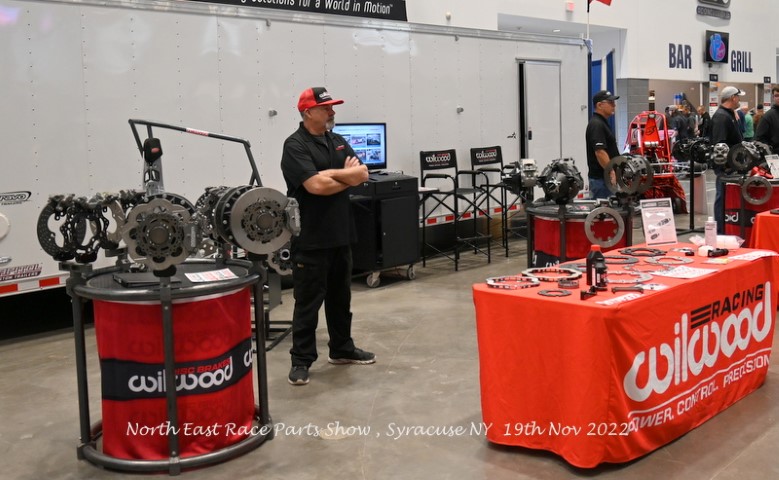 One of the things I enjoy about this show, is that I’m always guaranteed to meet up with plenty of friends. 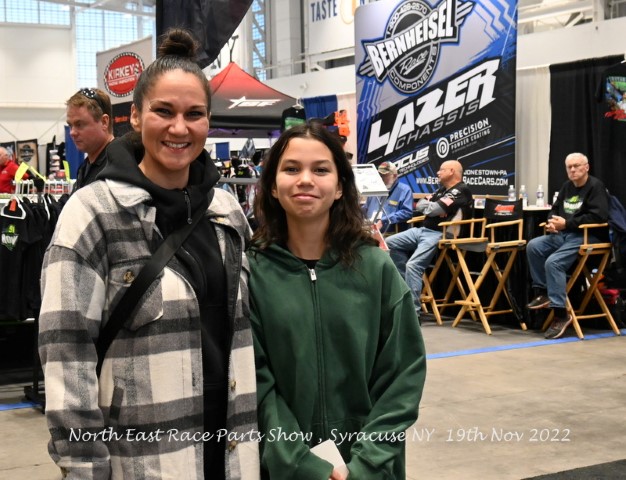 Claudia and Macy Tarbell from my local Mohawk International Raceway. 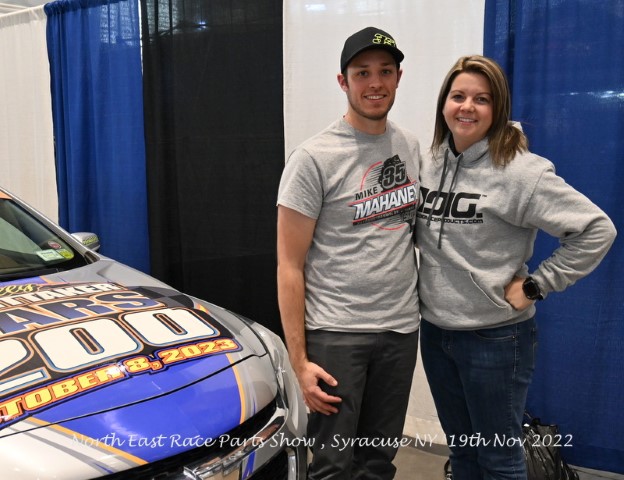 From the Airborne Speedway, at Plattsburgh,  I met up with Travis Bruno and Billie Joe Branham, 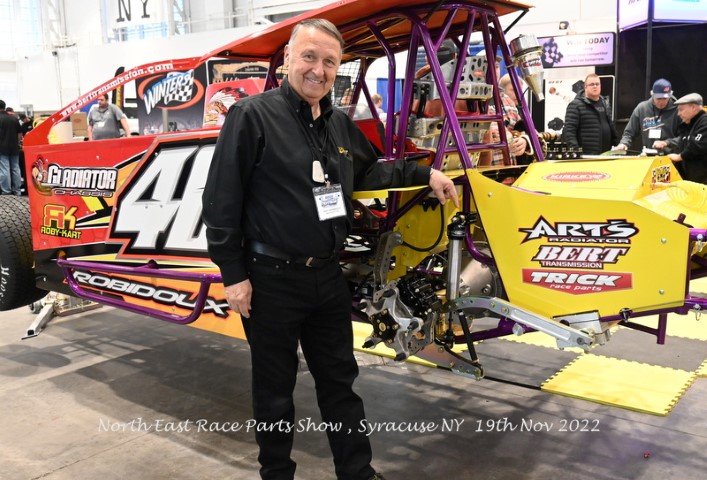 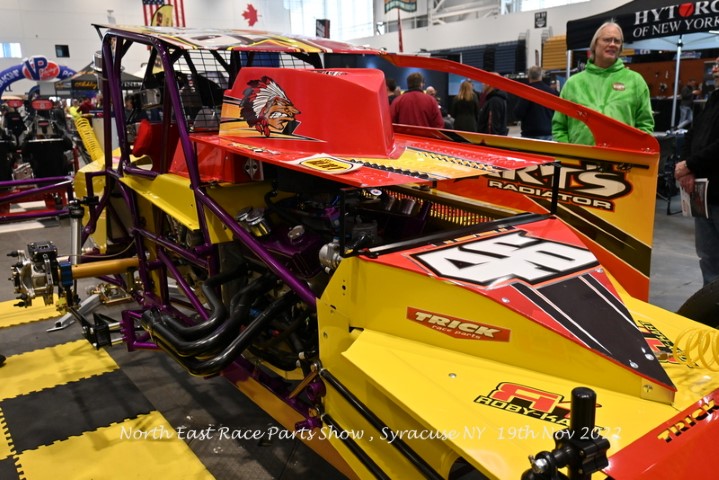 Then from St Constant , Quebec, Bert Robidoux was there looking after his BERT TRANSMISSION stand. 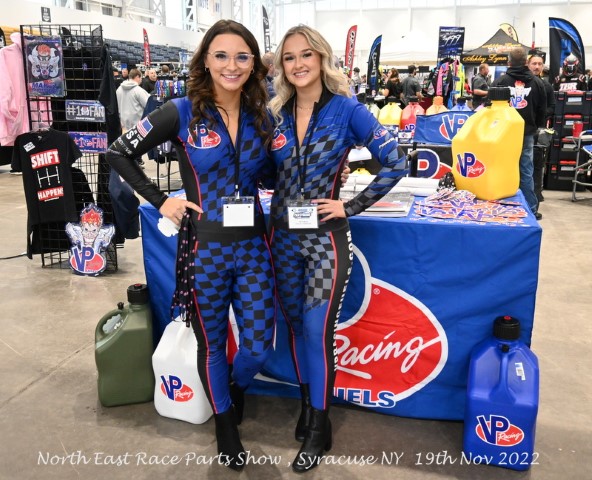 Alex Brown was there with her friend Haylie, working on the VP Race Fuels display . Her dad, Harley Brown is one of my local Mod Lite drivers at the M.I.R. 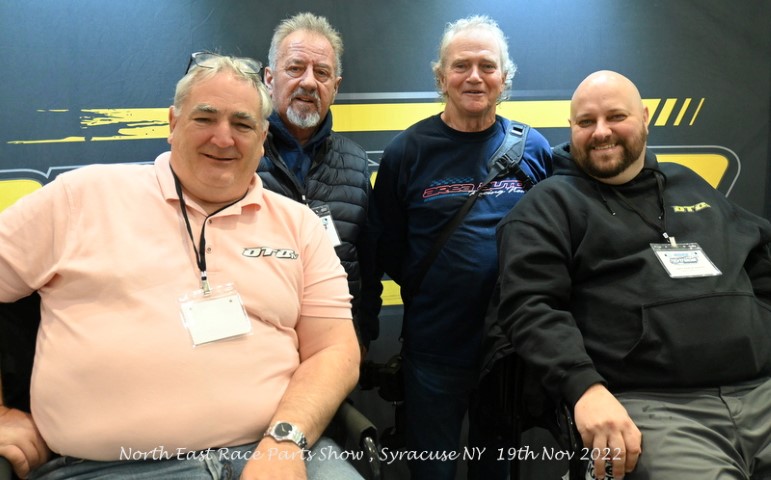 It was good to catch up with my media friends too, George Smith and Mike Mallet of Dirt Track Digest, and photographer Alex Bruce.

A lot of my time at the show was spent with two long time friends, that I hadn’t seen for a while .

The Planck family are some of the nicest people you could wish to meet.

For many years Dale was a regular racer at the tracks in my area , even though,  Homer is more than a three hour drive for them. 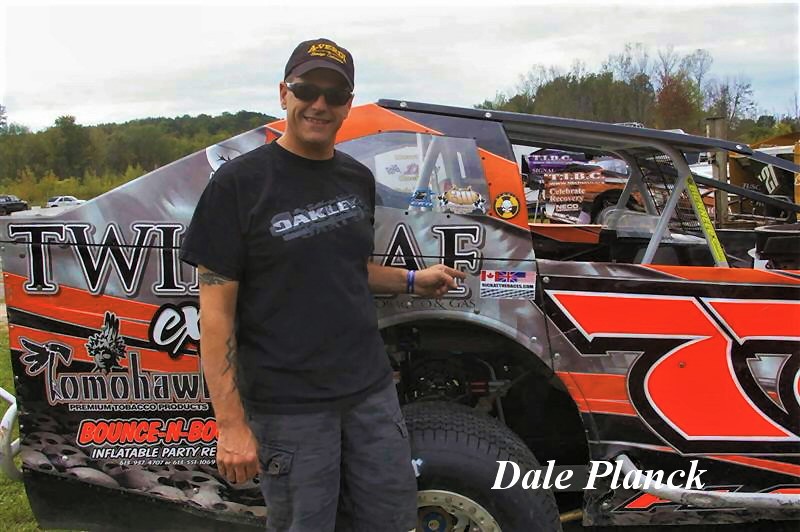 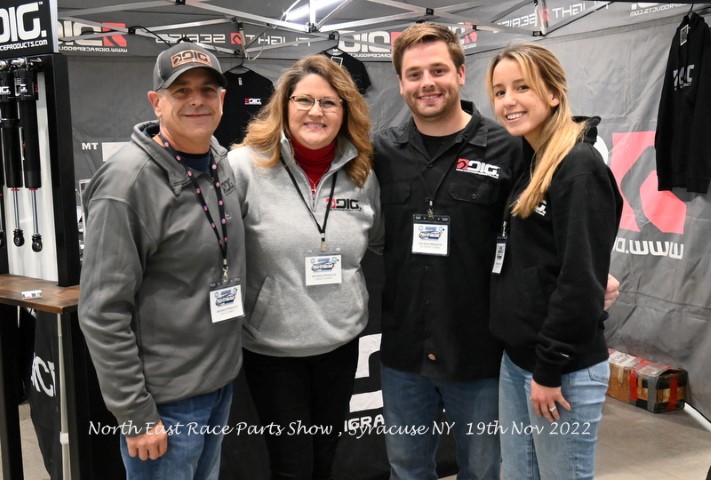 Along with their youngest son Brandon and his girlfriend Julide  , they now operate DIG RACE PRODUCTS, that specialize in supply, service and set ups for racing shocks.

One of the highlights of the the parts show is the auction, where various items go under the hammer. 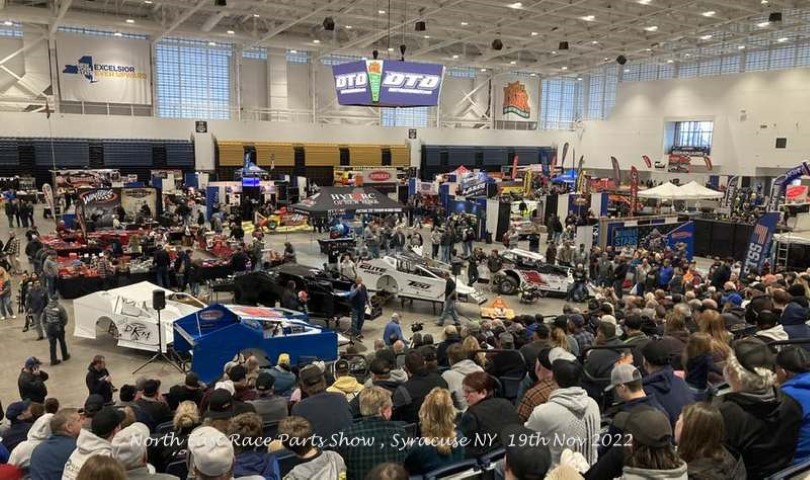 I watched this for about an hour before making my exit.

I had a room booked at the Ramada Hotel, where the DirtCar Banquet was being held, and I needed to check in.

Once settled inside my room  it was time to relax for a couple of hours before the night began.

The usual cocktail hour in an adjacent room took place before the large gathering got seated.

I was on one of the media tables, that consisted of Lenny Sammons (AARN publisher) Alex Bruce, Ken Dippel and Bill Moore Jr.

It was nice to see some of my pictures displayed through out the night  on the big screen slide show. 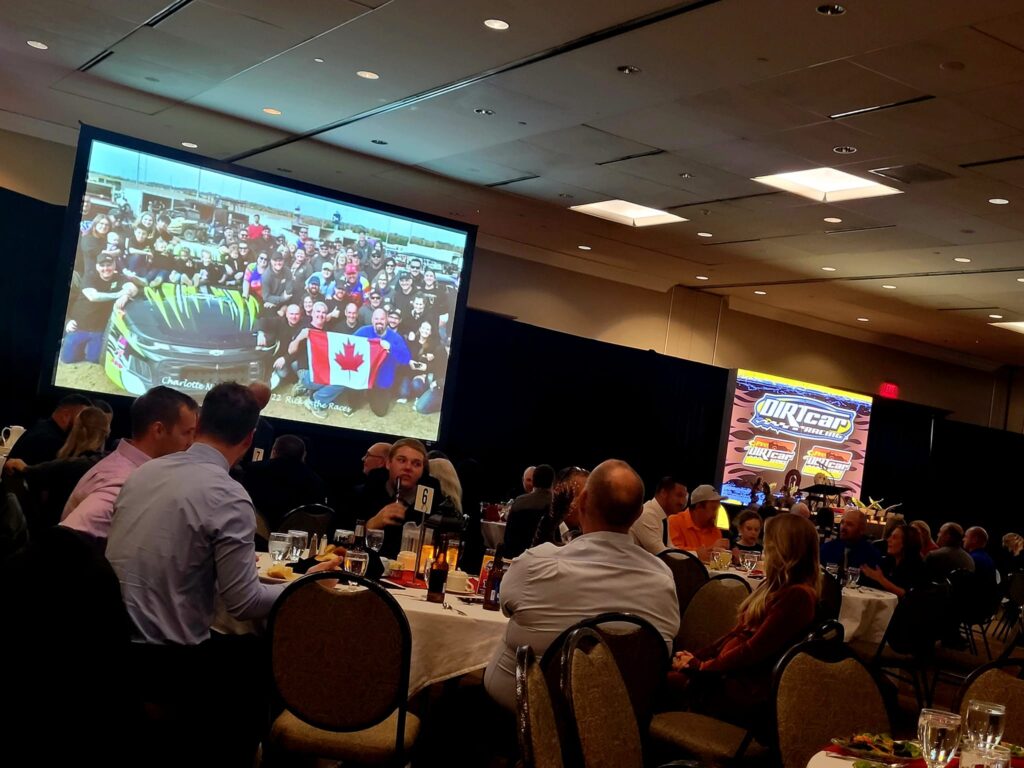 Once the awards ceremony began ,  the invited photographers, Alex, Ken , George Smith and myself went back stage to take the presentation pictures. 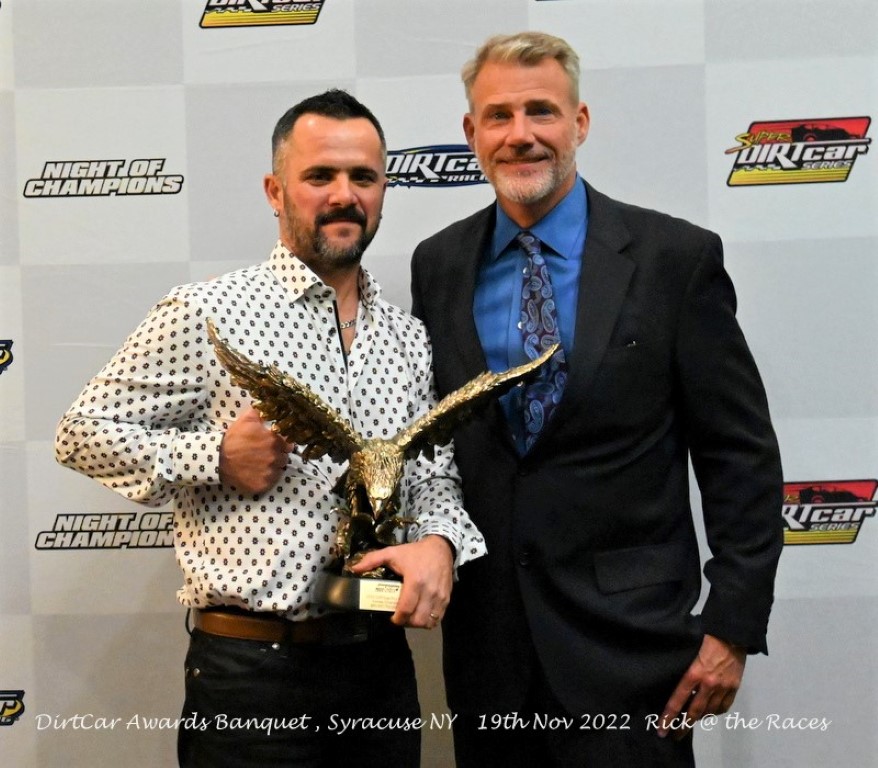 The big winners were Bruno Richard who won the Pro Stock Series. 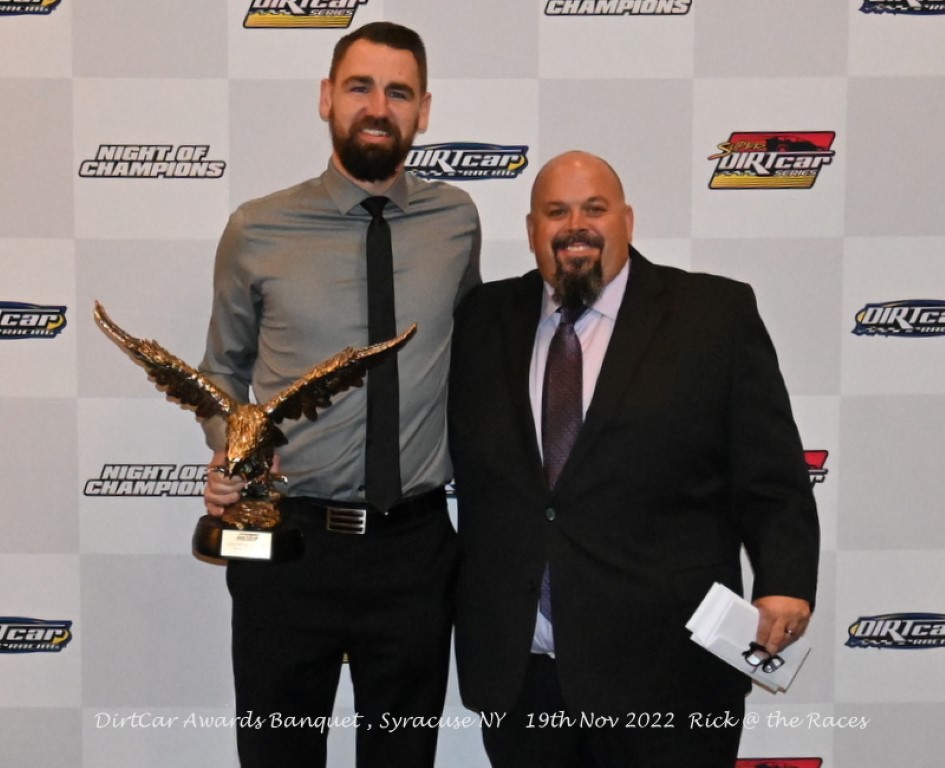 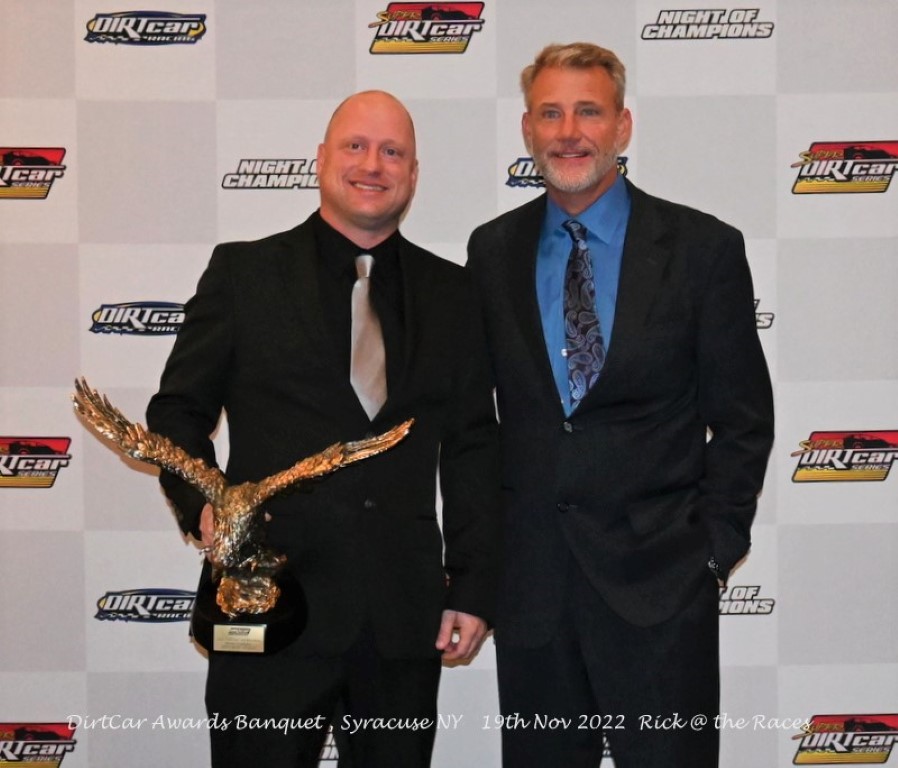 Once again Matt Sheppard was the winner of this years  SUPER DIRTCAR SERIES for the BIG BLOCK MODIFIEDS. 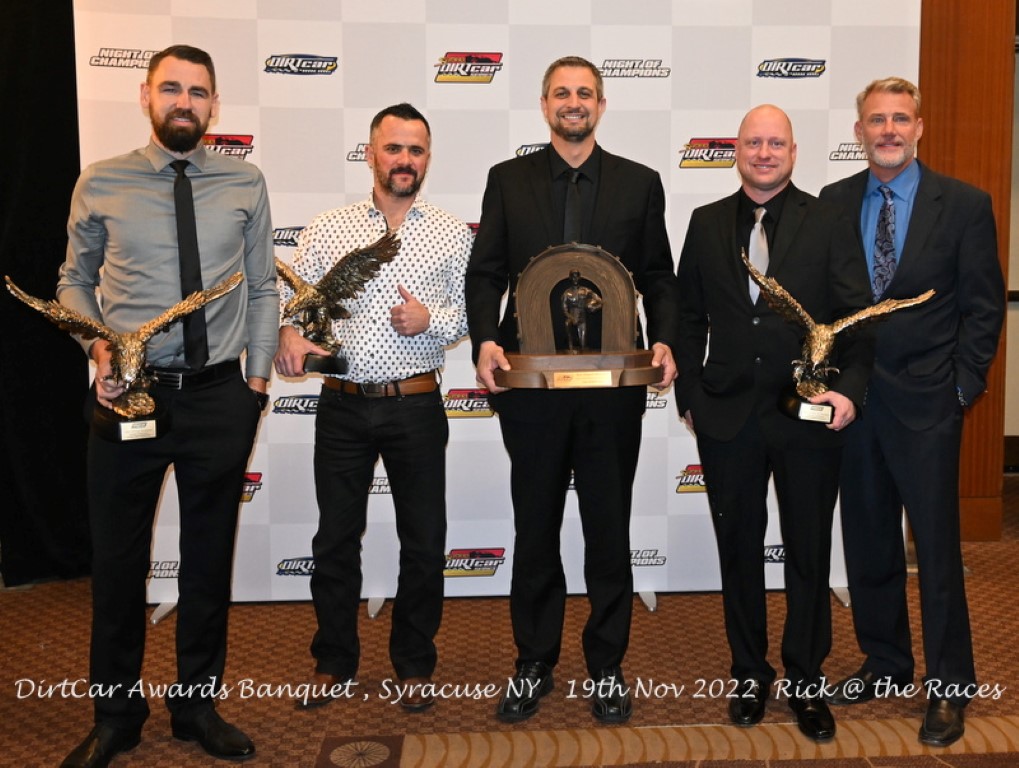 Here is the group photo of this years champions accompanied by DIRTCAR CEO Brian Carter.

When the picture taking was over at around 11-00 pm , I returned to my room for the night. It had been a long day and I was too tired to party.

I was awake early in the morning and was ready to head for home at 7-30 am.

The weather looked good when I left Liverpool, but by the time I got to the Mexico exit of I81, I ran into a big snow storm.

It was still early on Sunday morning so there wasn’t a lot of traffic, and I was able to proceed  through the ‘white out’ at a snails pace.

Lucky for me , a snow plow joined the I81 just in front of me, and I followed him through the deep stuff. The snow had stopped by the time I’d reached Adams, and the roads were clear all the way back to the Canadian border.

After a late breakfast at the Twin Leaf diner, I was back across the border and home, before mid day.

While I’d been fighting my way through the snow , I missed the mornings live TV coverage of the F1 Grand Prix from Abu Dhabi . I later found out that it was yet another win for Max Verstappen in the Red Bull.

In the middle of last week, before heading off on the Syracuse trip I heard the sad news that Dave Murphy had passed away after a long battle with cancer. 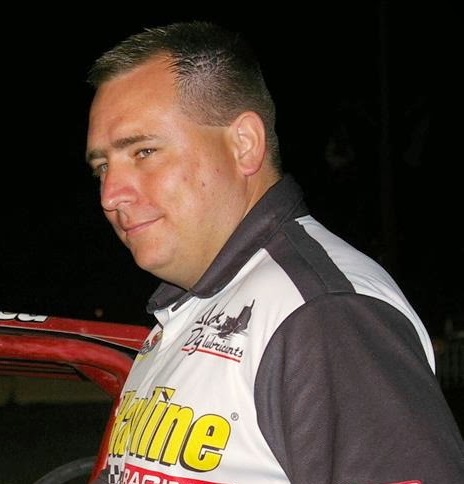 ‘Murph’ was a friend and an announcer at my local Cornwall and Brockville Speedways for many years. 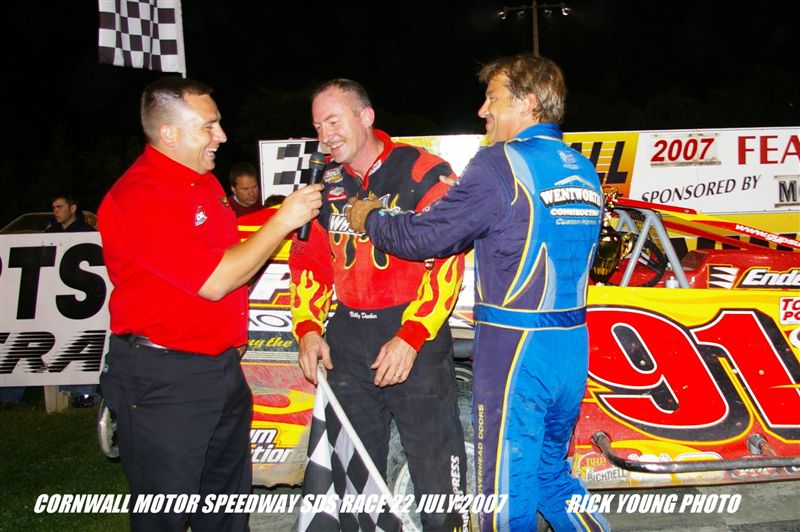 He was a great guy to work with and was one of the best in the business, He will be missed by all of us in the racing community. My sympathies go out to all his family at this difficult time.

On Wednesday the 23rd November I attended his funeral in Cornwall , along with my friend and former CMS promotor Ron Morin

One day later there was more sad news , when it was announced on social media that Paul Pekonnen had passed away.

Paul was a local racer who lived in the Brockville area.

For quite a while he competed in the 358 Modified division, but in recent years switched to Sprint Cars. My thoughts and sympathies go out to his family and friends. 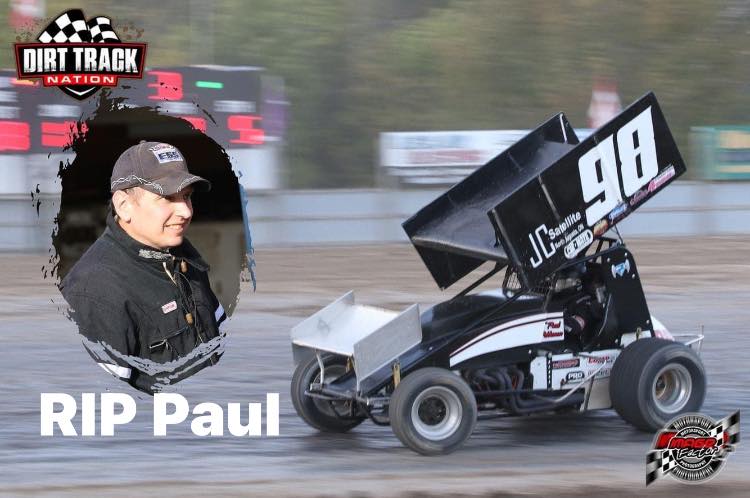