Christmas in the Carolinas     End of December 2022

With COVID restrictions  now lifted , I was able to spend Christmas with my family in North Carolina. Plans were made , that had to be changed at the last minute.

My Ford Thunderbird had been in the shop for a major brake overhaul. The parts had been difficult to locate and the Servo Booster had to be sent away for a rebuild. Luckily things all fell into place and it was back in my hands, Tuesday morning.

It was then tucked away in my garage ready for me to head south in the following days.

This was supposed to be my final day of preparation before heading off, but after watching the breakfast news on TV , my plans changed dramatically.

There were warnings of severe weather coming at the weekend for most of North America, and they were giving out advisories not to travel from Thursday evening until Saturday.

After hearing this at 8-00 am I quickly made the decision to get on my way as soon as possible.

It was a great day for travelling , the roads were clear, and not even any rain. I made good progress, and by 8-00 pm was booking in to the Red Roof Inn , at Winchester, Virginia.

When I looked out of the hotel room at 5-30 am it had just started to snow, so there was no hanging around , and I was on my way again as soon as I could .

When I left Winchester at 6-00 am the snow flakes were getting heavier, but within half an hour of driving , I was out of it.  The remaining drive through Virginia was just rain.

By the time I crossed into North Carolina the sky was clear and the roads were dry.

It’s a two hour drive from the state line to Carla’s place at Willow Spring and for the last hour of the drive I encountered  heavy rain and strong winds. It was still like this when I pulled into their driveway at mid day.

After a cup of tea and a rest , it was time to meet Lee, the latest edition to the family. Just a week before Carla had fulfilled her long time wish, of owning a horse, so we set off on the 5 minute drive to the ranch where he is stabled. 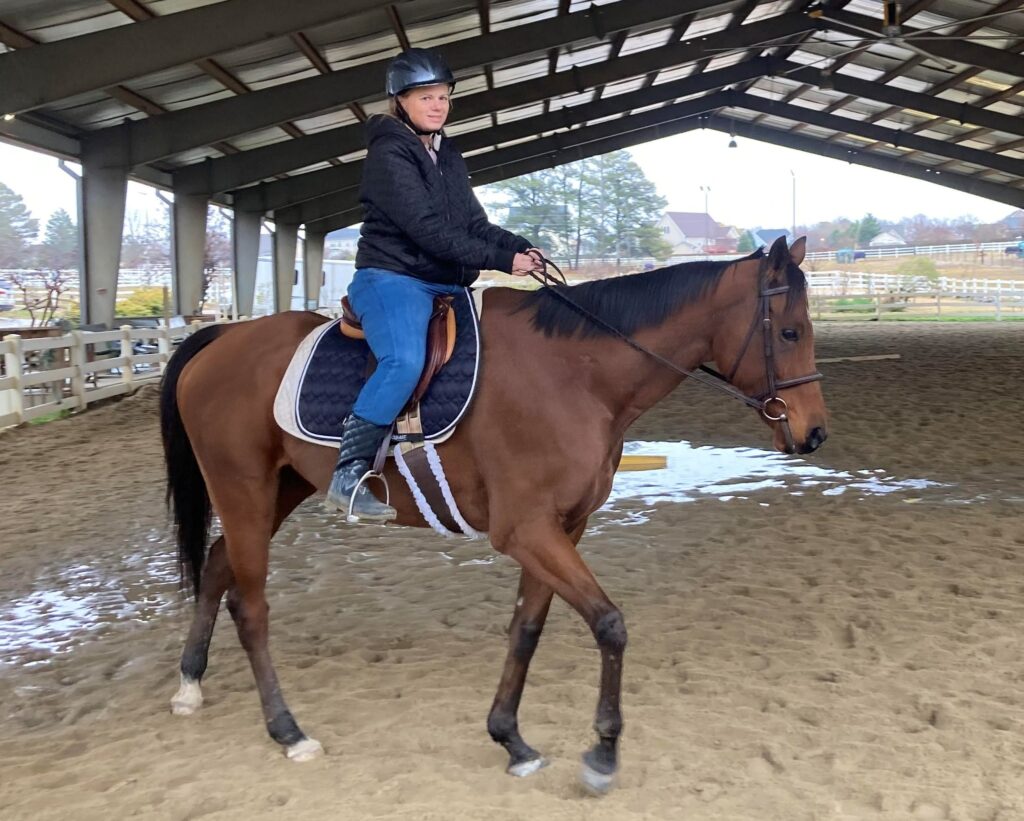 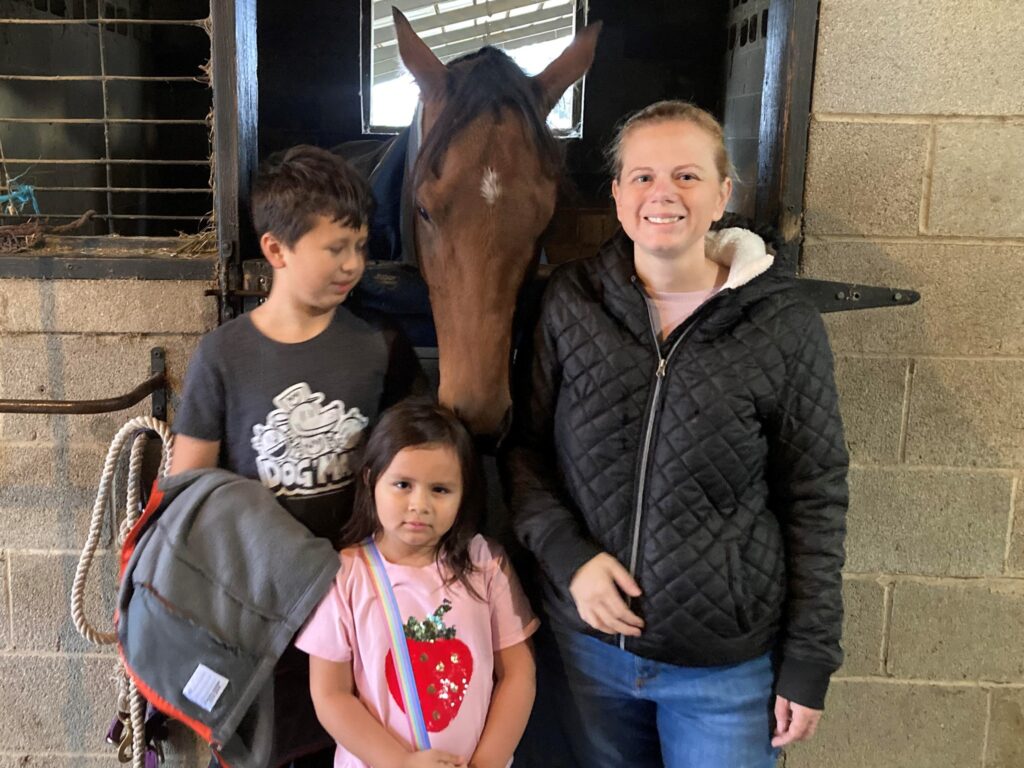 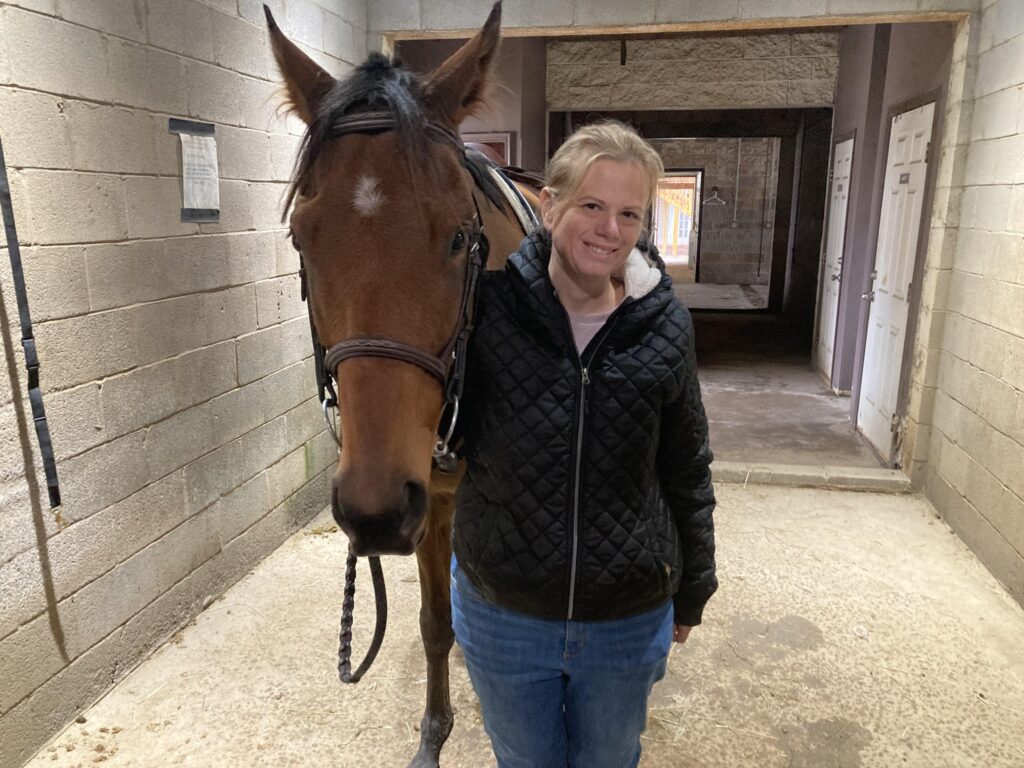 What a lovely boy he is and with a great temperament .

The day before Christmas Eve was spent relaxing and doing a bit of last minute shopping in nearby Fuquay Varina. Of course, more time visiting Lee.

Quality time with the family, and doing what has become a traditional, a Christmas Eve trip to a local church.

We followed this with some fun , making Kit Kat chocolate cabins. 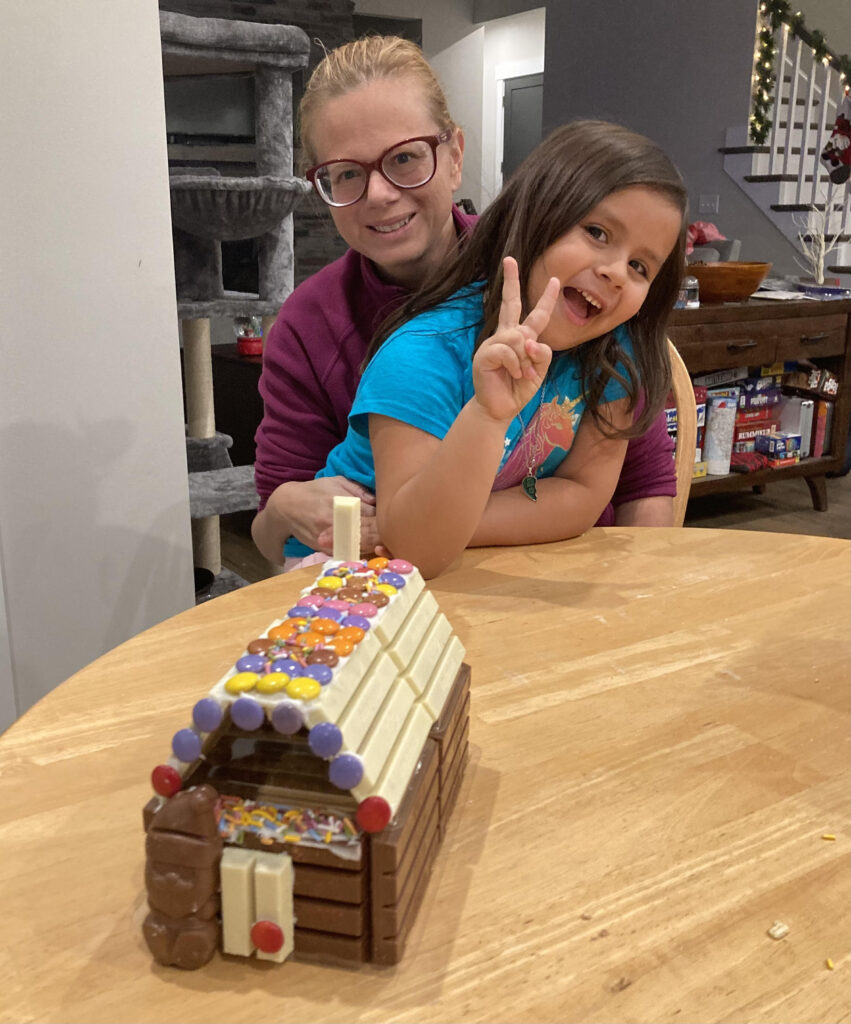 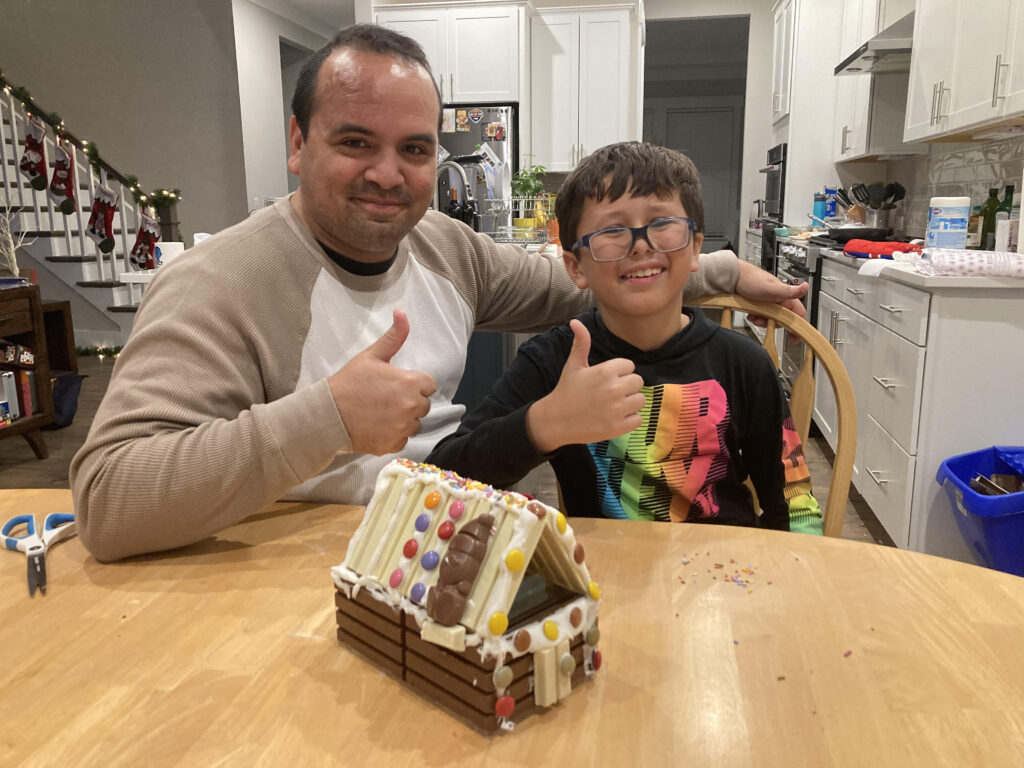 After the kids had opened their gifts, we were joined for dinner by Alex’s , Mother,  Doris, his brother Arturo and his girl-friend Rianna. 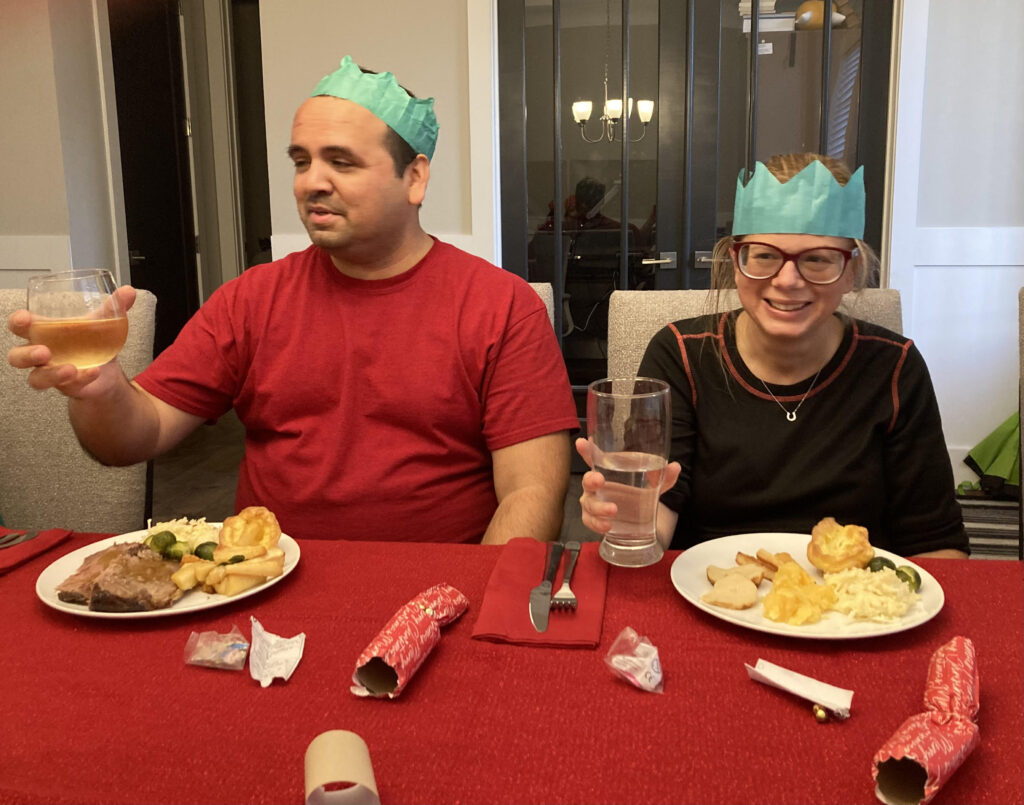 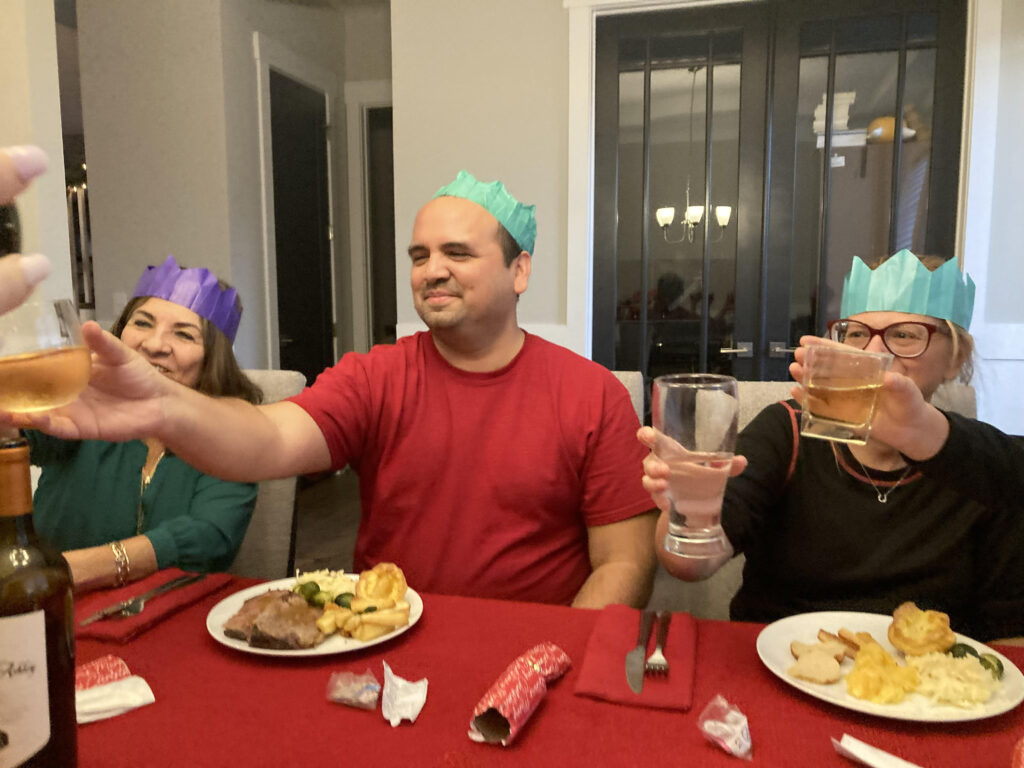 Originally my plan was to leave Carla’s place later that day and break up the journey by staying at the same hotel in Winchester VA that I did on the way down.

Two factors made me change my mind and leave a bit  earlier.

Firstly , with all the snow that Ontario had been getting, I didn’t know what to expect on my return home. I didn’t want to arrive at my house late at night and find my drive way blocked.

Secondly , another big Lake Effect storm was expected near Watertown NY, and I wanted to give myself plenty of time for that.

I awoke in Binghamton to some light flurries of snow and by 7-00 am I was on the road.

The snow soon stopped and by 8-15 am I had passed Syracuse, and was stopping for gas and a coffee at Brewerton.

The next part of the journey was going to be the most challenging with a big storm expected between here and the Canadian border. Sure enough by the time I got to Sandy Creek on the I81 , I was going through heavy snow.

This area gets dumped on every winter, so the transportation authorities are used to it,  and know how to handle the situation.

There were plenty of plows in evidence,  and police were out there monitoring things .

After a steady drive through the storm, I was soon out it and had passed Watertown.

Instead of my usual route across country to the Canadian border at Cornwall, I stayed on the (better plowed) I81 and crossed over at Landsdown (1000 Islands) .

There were no hold ups and within minutes, I was on Highway 401 heading for Cornwall.

After stopping along the way for a Tim Hortons, I was back home at 11-30 am. 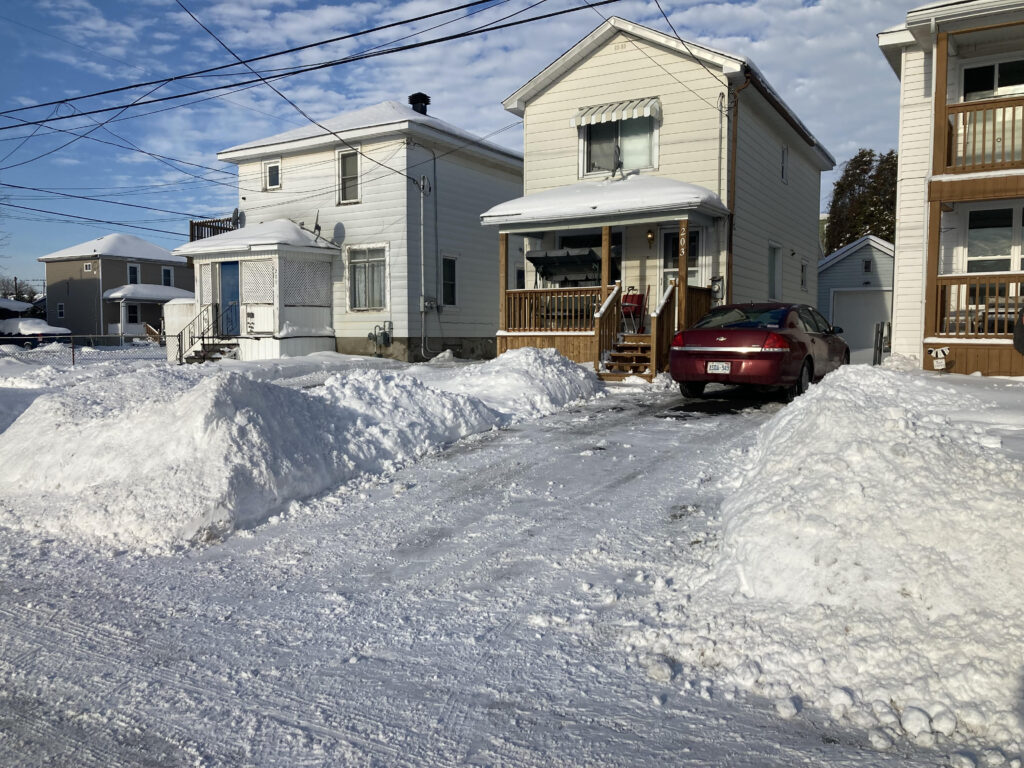 What a nice surprise, a good neighbor had cleared my driveway, and I was able to drive right to my doorstep.

That’s it for now, HAPPY NEW YEAR TO ALL