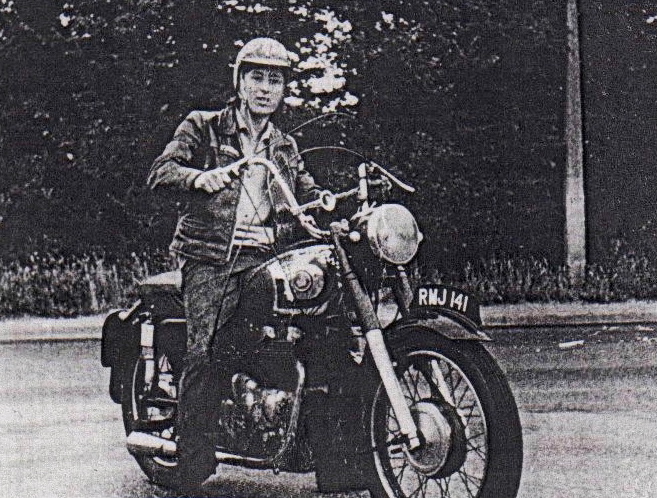 In the summer of 1970, I left the Mill Vale Secondary School in Dunstable (UK) and started full-time employment as an apprentice at Bagshawe and Co, an engineering company in the town.

The company made conveyor systems and I was being trained as a fabricator and welder.

In those days the Luton and Dunstable area was a hive of industry, with many businesses connected to the Motor industry. ( General Motors, Chrysler Corp and SKF to name a few).

There were about twenty apprentices in my year at Bagshawe and while we were at college on ‘day-release’ we hung out with the trainees from the other companies. Some of them would join me at the races, when we weren’t ‘chasing’ the young the college girls !

I was now living in Totternhoe, just outside Dunstable, and had started frequenting the local pubs in nearby Eaton Bray and Eddlesborough.

My regular ‘watering hole’ was the  Axe and Compass in Eddlesborough, sadly no longer a pub. One of the guys I met there was the village milkman, who also happened to be one of our local race car drivers.

Brian Holmes, who at this time was living in Slapton ,  another near by village. He had started in Bangers in the 1960’s , then moved on to BriSCA F2 but at this time, was dabbling in Mini Rods ( another budget formula). 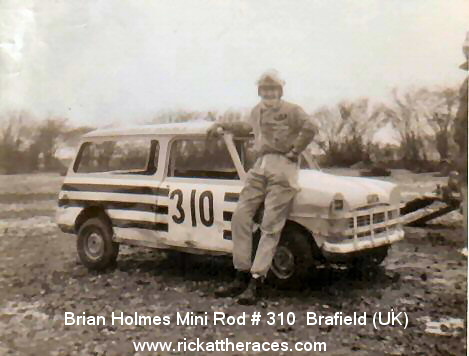 In the years to come, Brian and I would become good friends until he passed away in 2012 .

In 2008, and past the age of 65,  he was was still racing stock cars with his grandson Paul at the West World track in Cornwall (UK) close to his new home.

During the first part of 1971, you’d find me visiting my local tracks of Brafield, Harringay and Coventry, but on Saturday June 26, I added a new track to my portfolio.

In 1971 , Northants,  stock car driver Chris Butler was the man behind the opening of the Earls Barton Stadium, for the ‘boom’ formula of the time, Banger Racing.

I rode my BSA Bantam through the country lanes to the track which was located just a few miles away from Brafield. Sharing the bill that night were a few non contact cars from the Midland Hot Rod Club.

Sometime during 1970/71 ( I can’t remember the exact date) , I took and passed my motorcycle test which allowed me to ride something bigger. Prior to passing a ministry test, you were only permitted to ride bikes up to 250 cc .

My buddy Chris Pickup had a Matchless 500 twin , complete with ‘ape hanger’ handlebars and it looked ‘the works’ ! so I wanted something similar.

I was offered a 1955 AJS 500 twin at a good price, and before long it was mine. The AJS and Matchless were similar machines ( I think they were made by the same company) . The only problem with mine was a bad oil leak from the crank case. By the time I got to Brafield the bottom of my jeans were always dripping with oil. 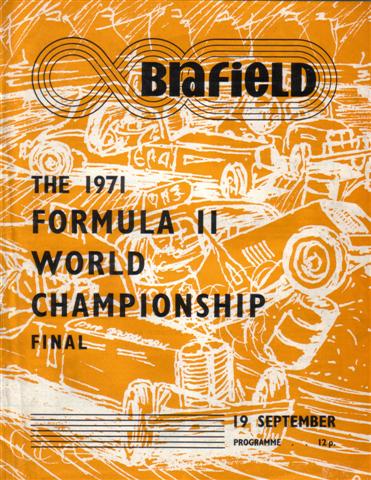 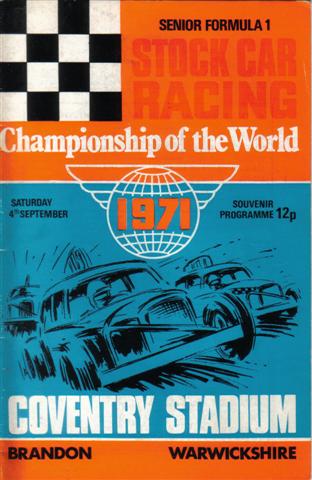 Two weeks earlier ( Sept 4) ,  I traveled to the Coventry staged 1971 BriSCA F1 World Final with one of my Bagshawe apprentice buddies, Dave Colvin in his Ford Anglia.

This was the year that Doug Cronshaw # 396 was handed the checkers after first and second placed Willie Harrison # 2 and championship defender Jim Esau # 244 put each other out with two laps to go. 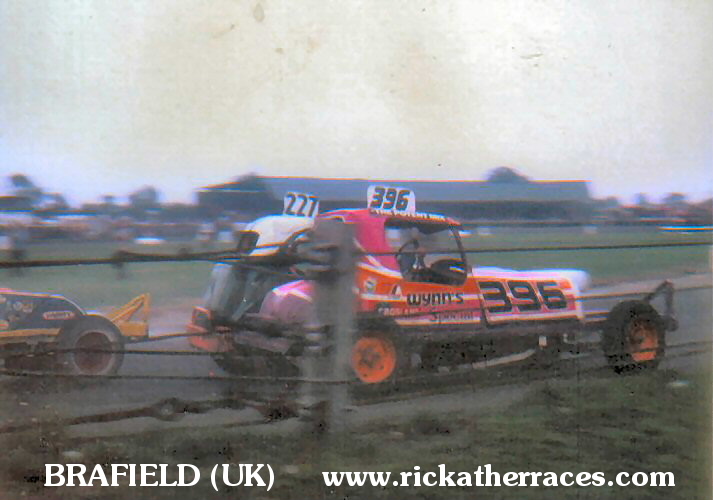 Straver from the Dutch EVACO organization was driving his own car . Eckout was driving the Darkie Wright built car of Chick Woodroffe # 1 and Van Der Spuy was using the spare car of Stuart Smith # 391.

The two South Africans were also at the traditional ‘day after’ event at Brafield (Sept 5). Both were involved in notable crashes. Eckout went backwards into the Horton Bend fence while Van Der Spuy did a spectacular pirouette and rollover on the start/finish line. 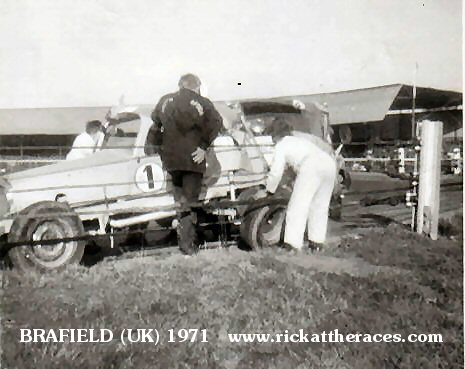 The following week I was at Harringay (Sept 11) for a regular meeting , but as the night unfolded , it turned out to be quite a historical event .

The thing that sticks in most peoples mind about that night at Harringay was the final result.

Excluding the USAF drivers who were living in the UK, the last overseas drivers to win finals were, Chevalier D’Orgeix ( France) and a touring USA team during the 1950’s. D’Orgeix won the first ever stock car meeting to be staged in the UK at the New Cross Stadium (South London) on Good Friday 1954.

The 1971 Spedeworth Superstox World Final was held at Wimbledon on Sept 18 .

Strange as it may seam,  I never knew Geoff at the time but now feel I know him quite well, as we’ve since become acquainted.

In recent years I was contacted by his son Kai who became based in Michigan USA.

Kai was just starting his racing career at the Waterford Hills Circuit and as a result I did a SHORT CIRCUIT magazine article about both of them.

Geoff emigrated to South Africa during the mid 1970’s where he continued racing, first on the ovals and then on to such world famous tracks as the Kyalami Circuit. He’s been a long time recipient of my RICK @ the RACES adventures, and a friend on Face Book.

I turned 17 years old in 1971 and had started taking driving lessons.

First of all in Mum’s ‘split screen’ Morris Minor, then in a driving schools Ford Escort. 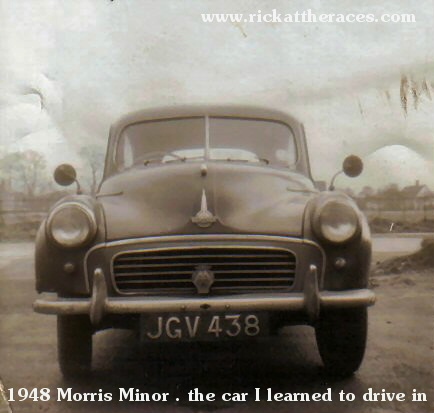 Not long after passing my driving test I was the proud owner of my first car, a BMC Morris Mini van (with a side window conversion). It was not only better for getting to the races, it was also a great help in scoring with the girls ! 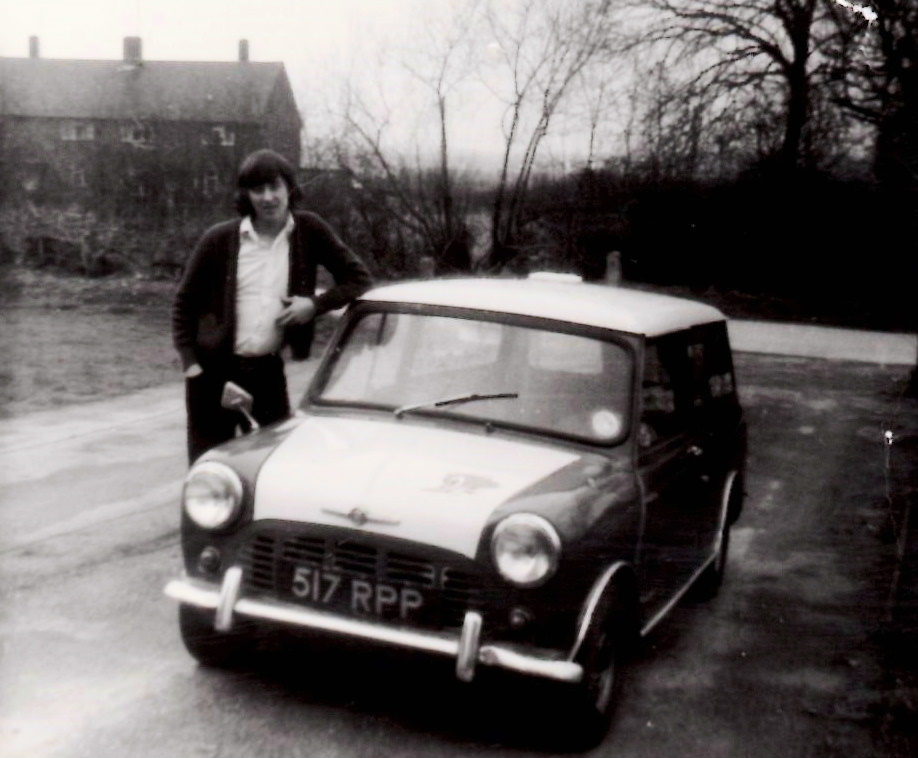 By then  it was October, and the BriSCA season was almost over, but that didn’t stop me attending races.

My new acquisition was put into service straight away. The Spedeworth season always ran later than BriSCA’s , so I became a regular patron at the Wimbledon Stadium right up until November 20.

This gave me a chance to witness a gold topped Geoff Goddard # 294 in action. 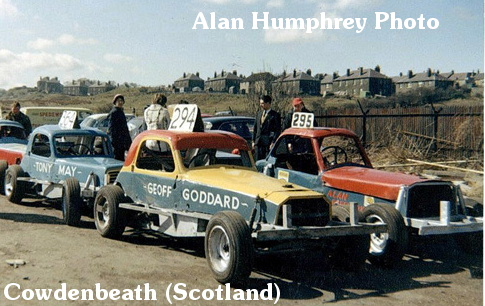