Towards the end of 1987 we put our house in Cosgrove on the market with the intentions of moving once more.

The place in Cosgrove had been an ex council house that needed a lot of modernizing. The heating was by means of a ‘messy’ coal fire which had became quite tiresome , so we decided a different place to live would be the best answer.

When 1988 began I had no idea that this would be the turning point where I’d gradually be cutting down on my racing.

BriSCA F1 and F2 stock cars had always been my passion but times were changing and the cars and style of racing were getting far removed from what I’d loved since first becoming a fan in the 1960’s.

By now most of the cars on the track had ‘silly looking’ wings attached to the roofs and the paint jobs were getting all too professional for my liking.

Many of the guys I used to race with, were  now taking a back seat as their sons became old enough to compete. Stuart Smith’s son Andrew, Willie Harrison’s son Paul and Frankie Wainman’s son Frankie Jr were just starting their racing careers. 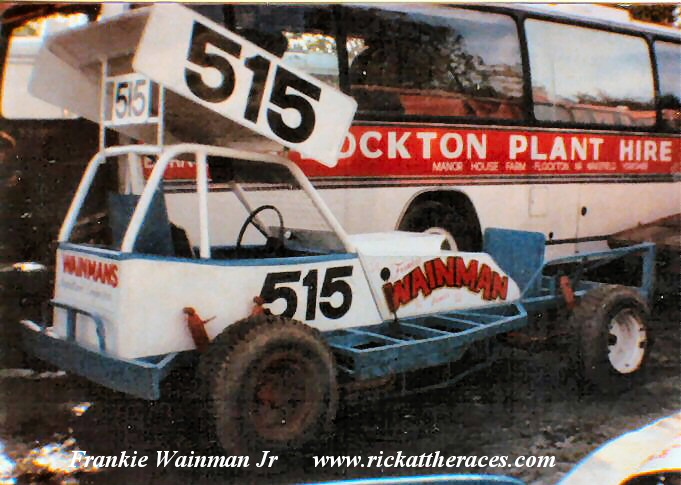 I didn’t find the action as entertaining as it was in the past and by now , I was attending the races mainly for the social side, but was still helping out Ian Hall (381) with his BriSCA F1 in the pits at the tracks he raced at ( Coventry, Brafield and Mildenhall) 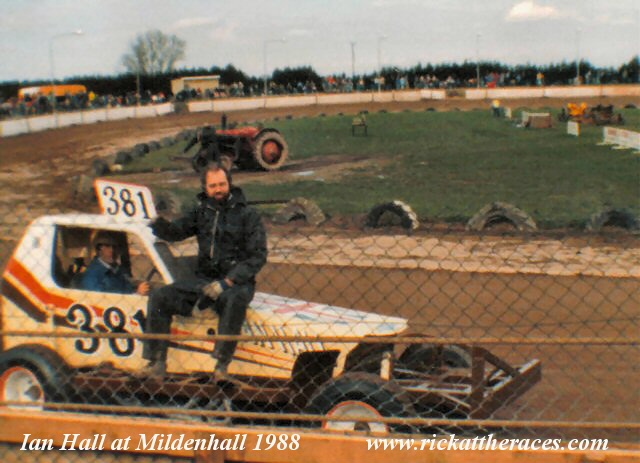 Throughout the winter I’d been continuing with the reconstruction of the ex Superstox, that Ian Dominey had acquired for me the previous summer. 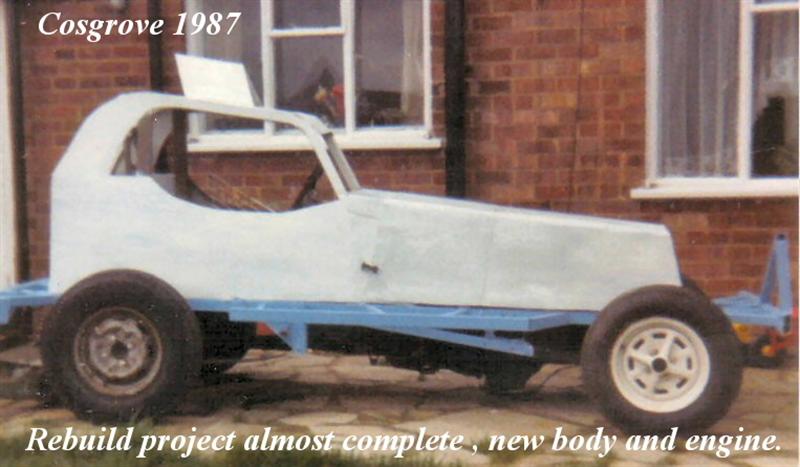 My year started off with a trip to the Racing Car Show on Saturday Jan 9. It was being held at Olympia in West London and Oval racing was to be well represented.

On January 30, it was the annual VSCA dinner and dance which we attended.

As usual, there were many famous names from the past in attendance.

The first race meeting of the year that I attended was the Brafield opener on March 13 which was won by John Cayzer (495) . I saw Cayzer do the same thing the following week at Hednesford.

The Hednesford Hills Raceway north of Birmingham, had been missing from the BriSCA calender for nearly a decade and in 1988 it returned with Long Eaton’s Keith Barber doing the organizing. They had the season opener on March 20 and plans were on hand to hold the BriSCA F1 World Final there later in the year. 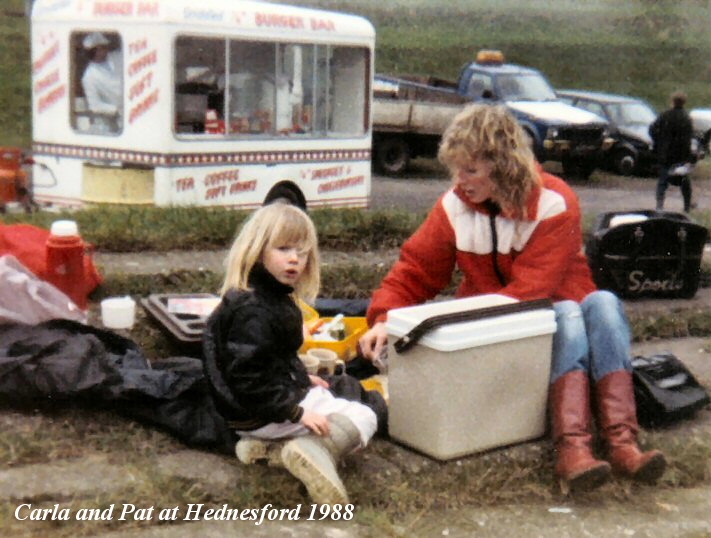 I saw Ray Tyldesley (85) win the Coventry opener on April 2 , and then the next day I was at Brafield , and again on April 17.

I went down with a bout of tonsillitis, that kept me off work from 24 to 29 April which was the beginning of bad year as far as my health was concerned.

April 30 was the start of the ‘May Day holiday weekend’ so we towed our caravan up to Hunstanton on the Norfolk coast. 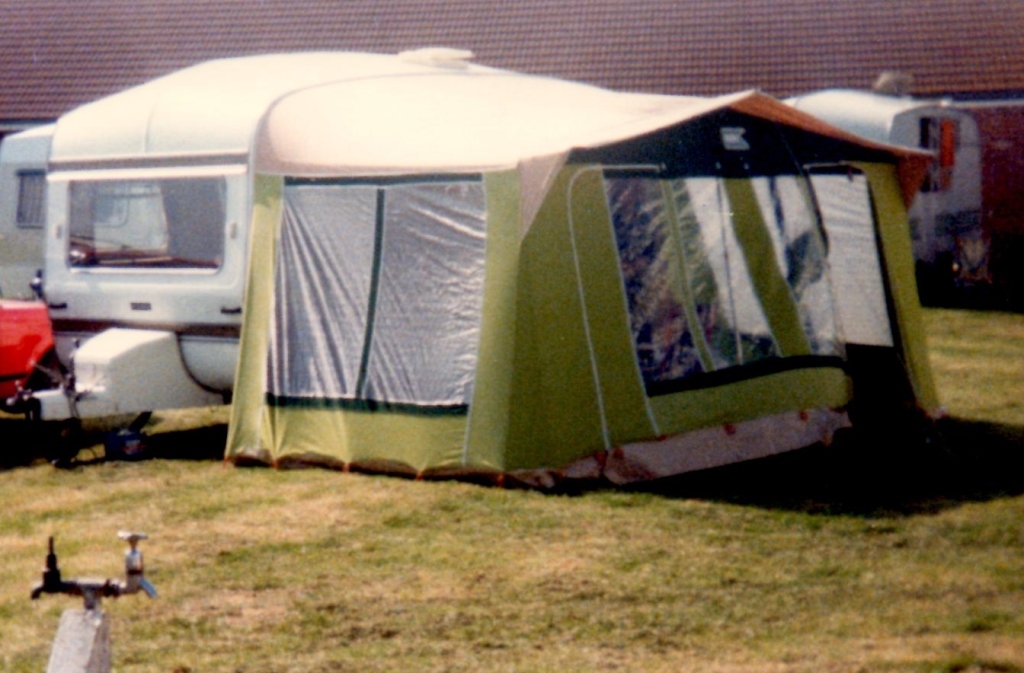 This was a handy place to be camping for the BriSCA F1 races that were taking place at Kings Lynn on Saturday (1 May). 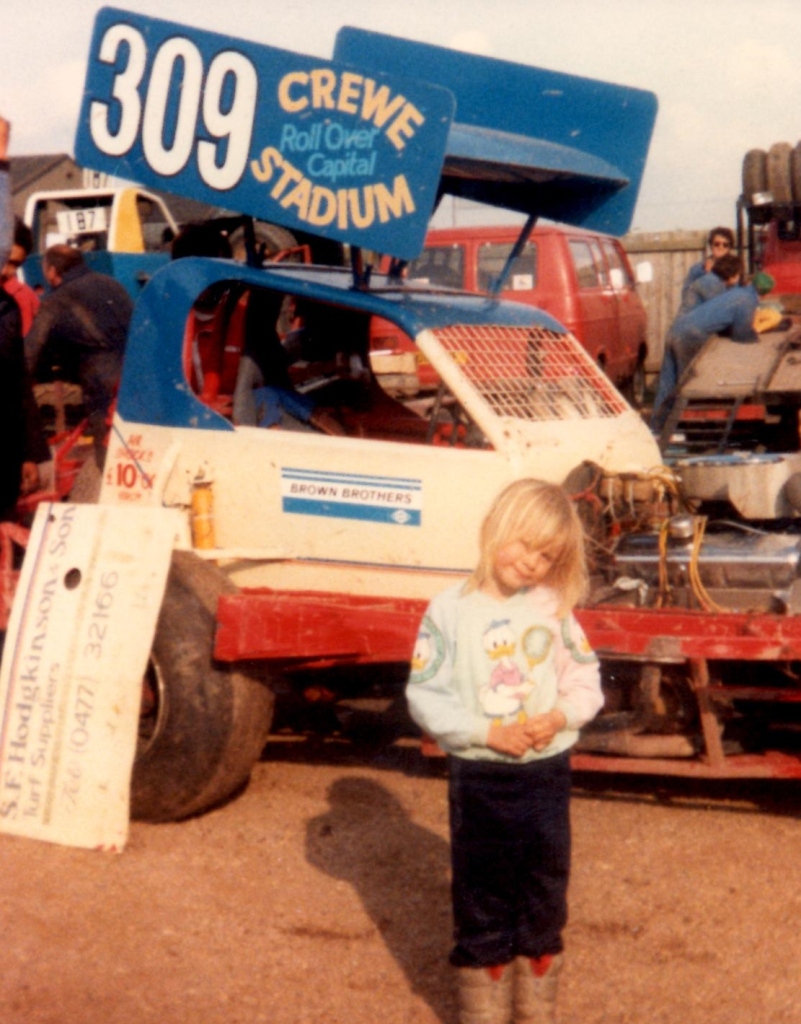 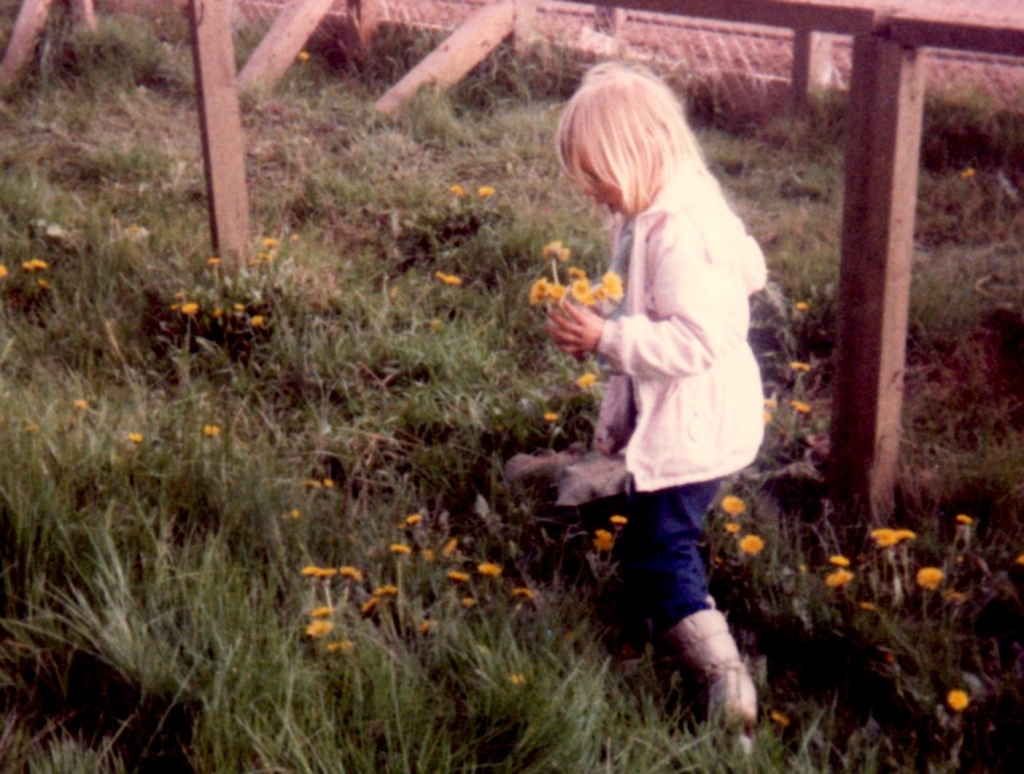 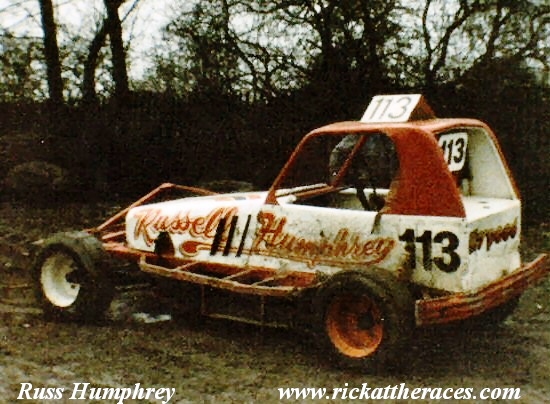 The next three meetings I attended were all won by reigning World Champion John Lund (53). He was on great form and claimed two victories at Coventry (May 7 / Jun 4) and one at Mildenhall (May 8). John Cayzer (495) took the honors at Mildenhall on Jun 5.

We found a buyer for our house and on Friday June 10 moved to a new home in nearby Stony Stratford.

It was only a five minute drive to Bejam’s , Milton Keynes Cold Store where I worked .

Not long after moving in, I sold the ‘almost finished’ F2/Superstox that I’d been rebuilding. 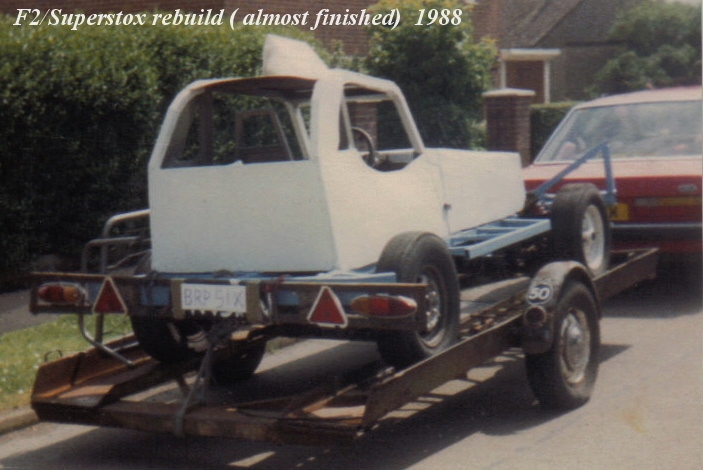 There’s always plenty of time consuming things to do when relocating so when a good offer came my way, I decided to sell.

I was at Brafield on Jun 19, Coventry July 2 and Long Eaton July 9.

On Sunday July 10 , I did something a little bit different !

Bejam, where I worked had a good sports and social club that organized various events for it’s members. They’d arranged a special deal on tickets for the British Grand Prix which was being held at the nearby Silverstone Circuit.

I didn’t hesitate in buying one and on Sunday morning I set off on my Yamaha motor-cycle. 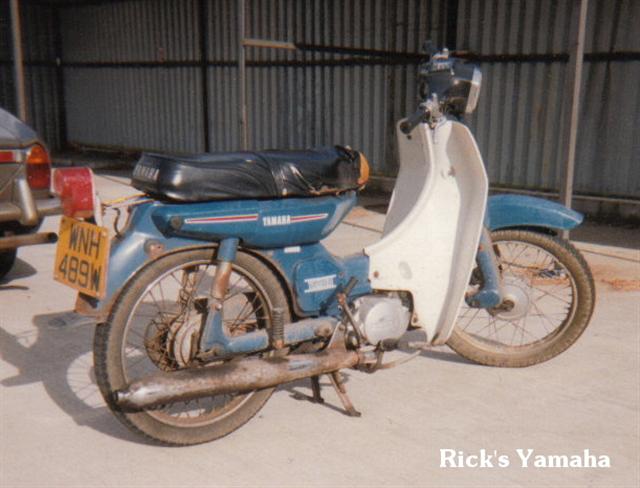 The reason why I went by this mode of transport was to avoid the traffic jams. When it’s Grand Prix day at Silverstone, the surrounding area can become grid locked, so by by taking my bike I was able to get there in just 20 minutes after leaving home. 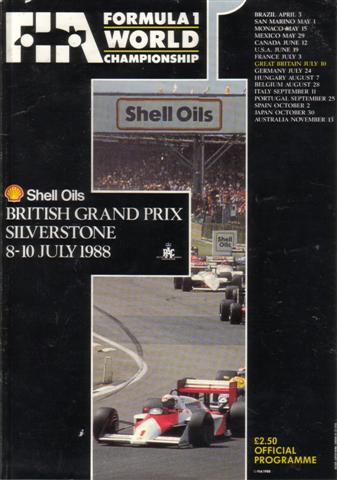 It was a really wet day and the race was held in the pouring rain.

I can remember it being so wet that with my crash helmet in hand and wearing a plastic rain cape,  I walked straight through security and found myself on the starting stretch pit area and garages, and was among the drivers and teams.

With the fear of getting thrown out, I didn’t have the nerve to stay there for too long, but was there long enough to be among the ‘elite’ for a while.

The ‘late – great’  Ayrton Senna won that day in a McLaren with Britain’s Nigel Mansell in a Williams coming home second.

Senna was one of the best race car drivers of all time until his tragic death in a crash while leading the 1994 San Marino Grand Prix.

I was at Brafield (July 24) and Coventry (Aug 6) before going to Silverstone again on Aug 14.

This time it was for the ATS SUPER TRUCK trophy. 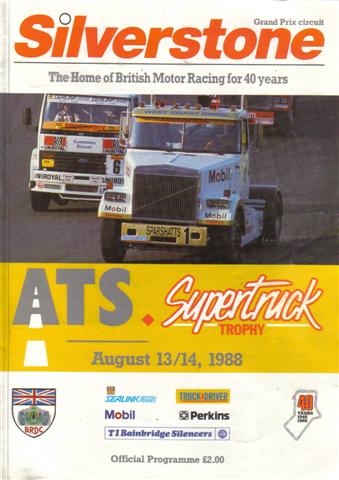 This type of Truck Racing was for real trucks ( transport) and not the pick up type , seen in present times NASCAR truck racing.

A few days before going to Silverstone our Ford Granada was hit by a construction tractor while it was parked. The damage wasn’t serious, (just paintwork and superficial body trim) but we decided to make an insurance claim against the offender with the intentions of getting it repaired. 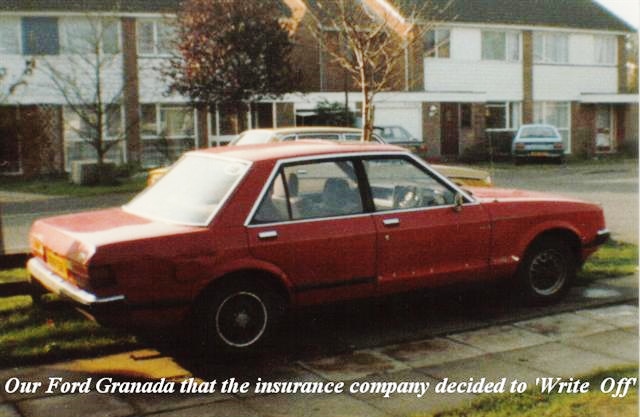 We had a holiday planned for the following week so towed our caravan down to a camp site in Hastings on the south coast.

We were joined by our friends and fellow caravaners, Colin and Kim Herridge and their sons Leigh and Dean. 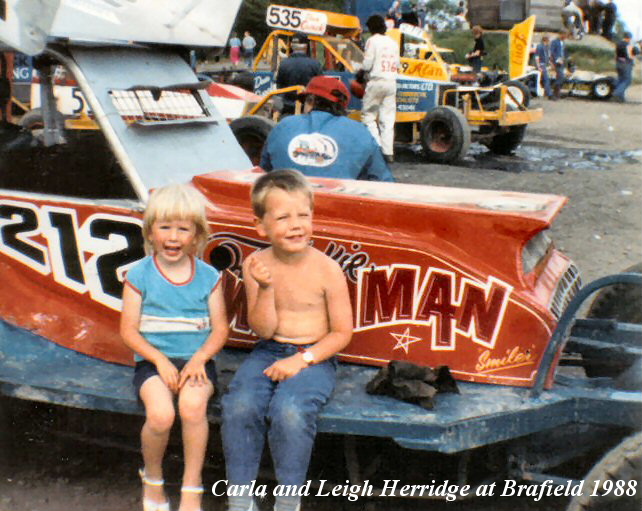 We based ourselves at the Haven Campsite , located high above the town on the road to Rye. 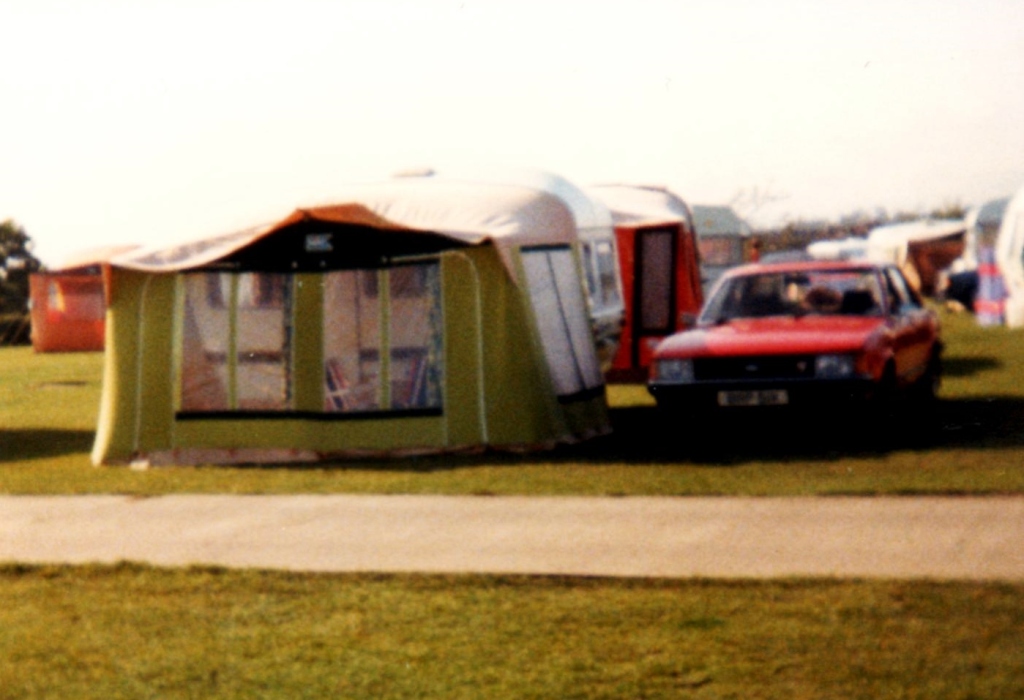 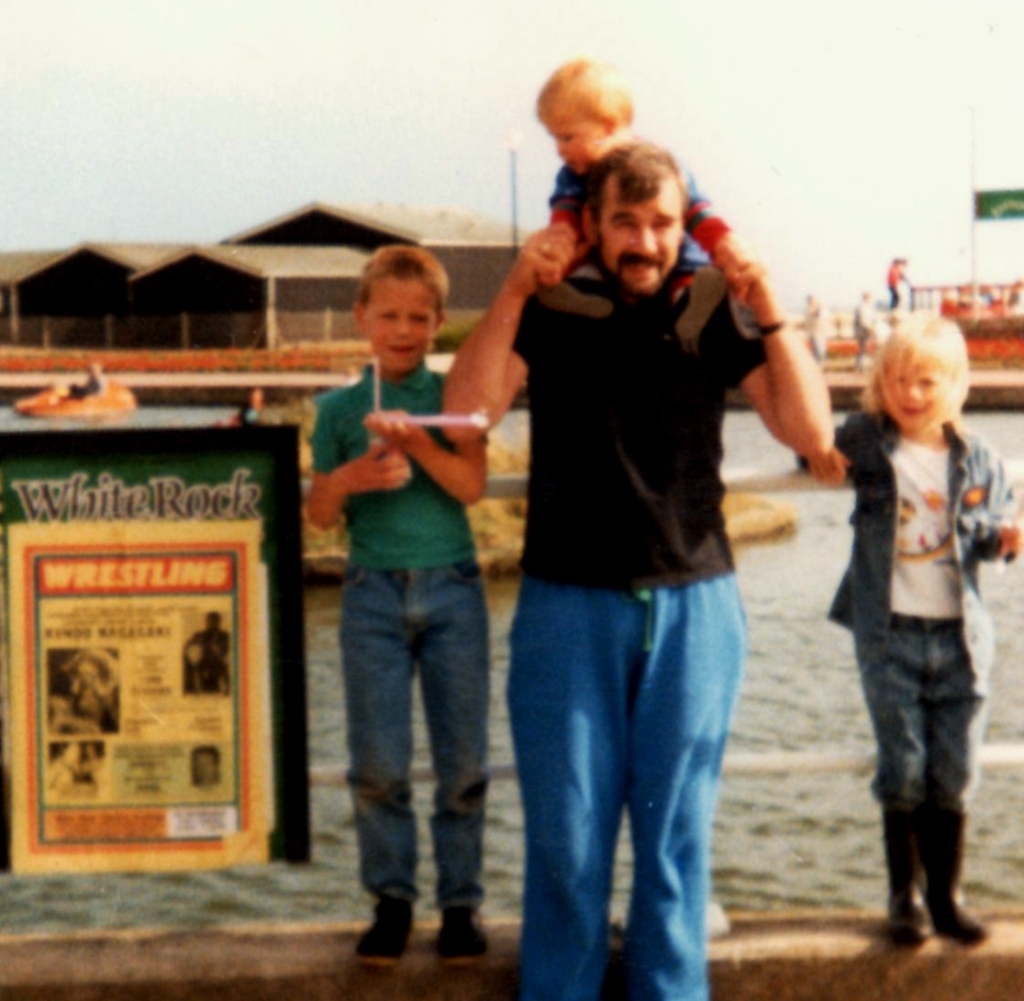 Hastings, is famous for it’s cliff face and we took a ride from the sea front , to the top, on the funicular railway. 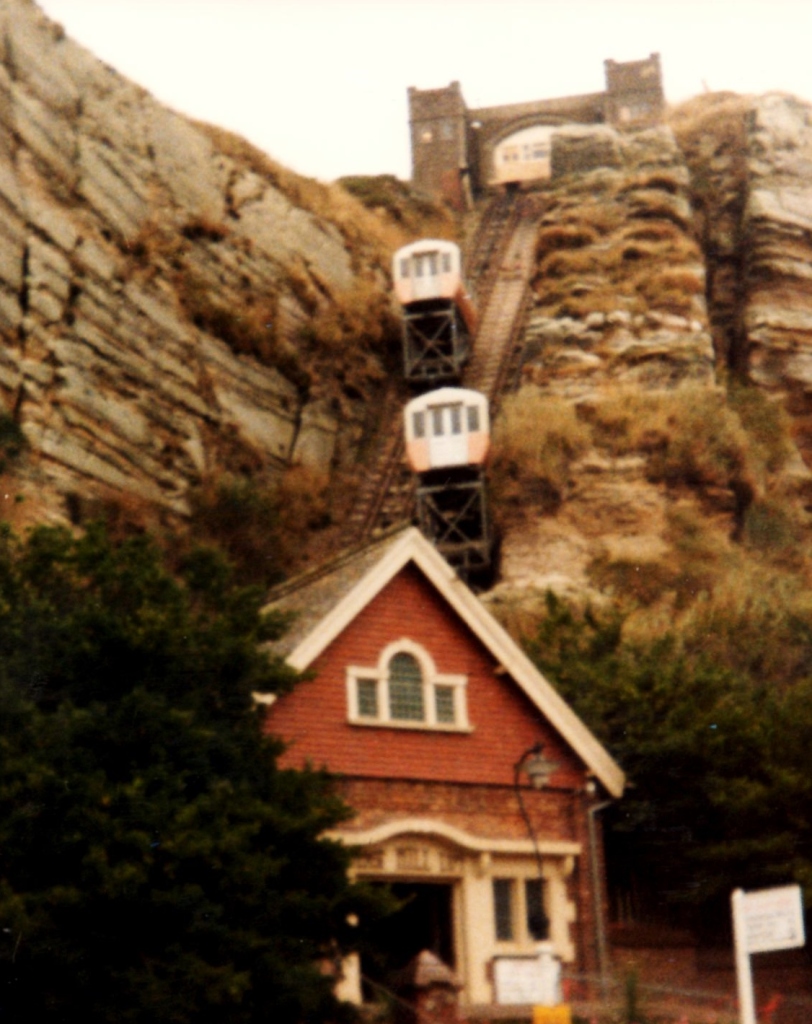 One of the other things we did while we were there was visit the Romney, Hythe and Dymchurch  miniture railway that goes between the three towns. Pat , Kim, Carla and Dean took the train , while me, Colin and Dean, drove to the end of the line to pick them up. 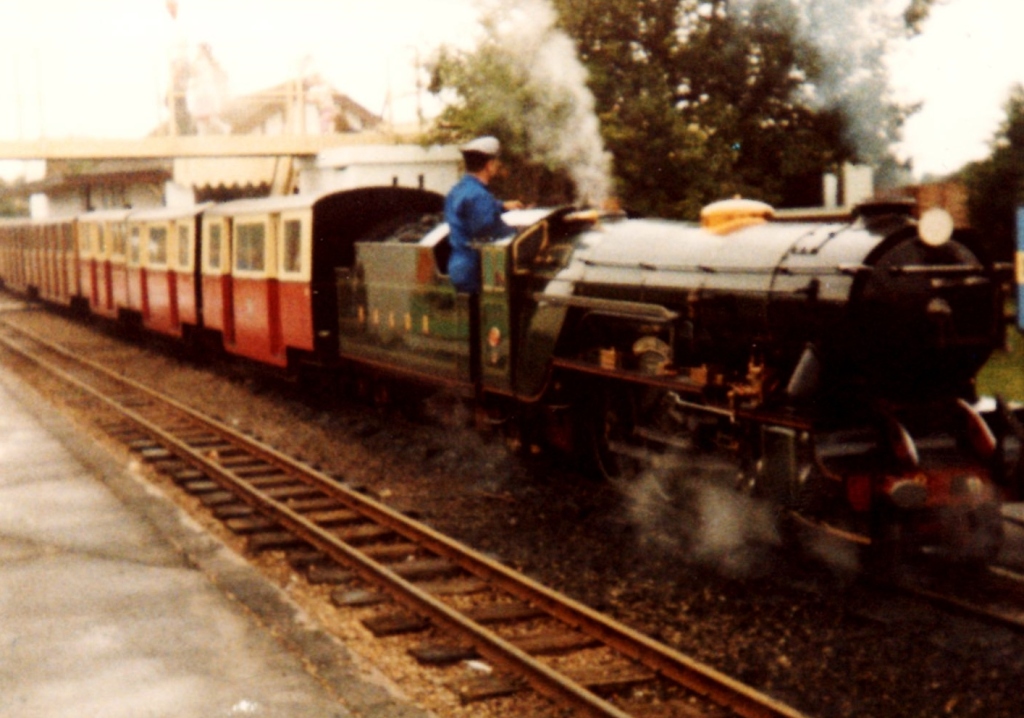 While we were in the West Sussex area we attended the Superstox World Final that was being held at the Arlington Stadium near Eastbourne on Aug 29 , which was taking place on the ‘holiday Monday’.

It was the first time this event had been held at this historic old track and it was also my first visit. 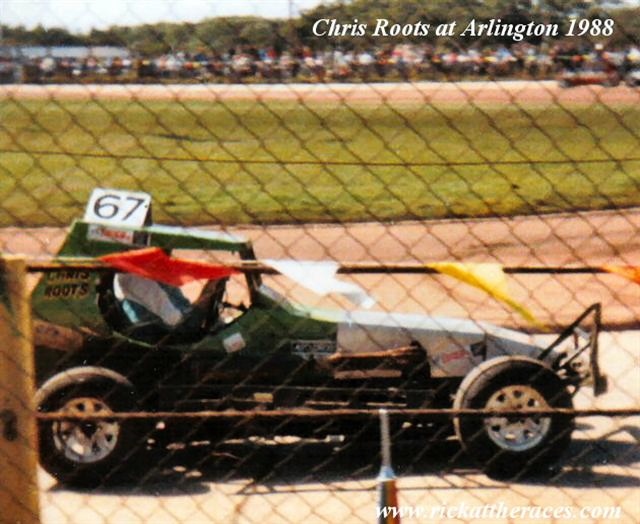 The big race was won by defending champion Martyn Brand ( 54) of Spalding in Lincolnshire.

The following day, while we were still at the campsite, I became unwell, and was in severe pain so had to visit a doctor in Hastings.

It was the start of a series of kidney stone attacks that I was to suffer that year. After the doctor had given me pain killers we returned home to Stony Stratford later that day (Tuesday) .

Everything was OK until Saturday, when I suffered another attack of severe pain. The doctor was called out, and he administered more pain killers.

For the first time in ages, I missed my monthly visit to the races at Coventry .

The next day I had yet another attack, and this time the doctor called for an ambulance. I was taken to the Milton Keynes Hospital where I was kept in overnight. This was the first time I’d slept in,  or occupied a hospital bed. I was only in hospital for one night, but needed a couple of weeks sick leave from work.

The BriSCA F1 World Final was being held at Hednesford the following weekend (Sept 10/11) which I had to miss. 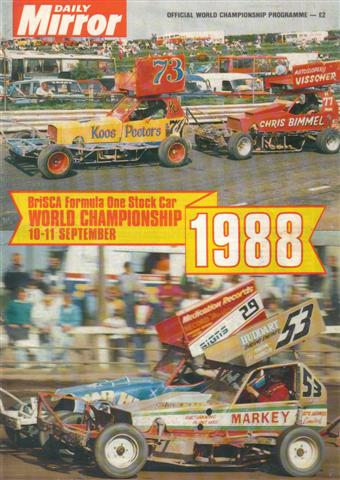 On Sept 18 it was the BriSCA F2 World Final at the Smeatharpe Stadium (Taunton) but instead , I chose to be at my local Brafield track for the annual VSCA ‘get together’ that featured BriSCA F1’s and Hot Rods.

The big race at Smeatharpe was won by long distance traveler Jimmy Wallace (16) from Scotland. 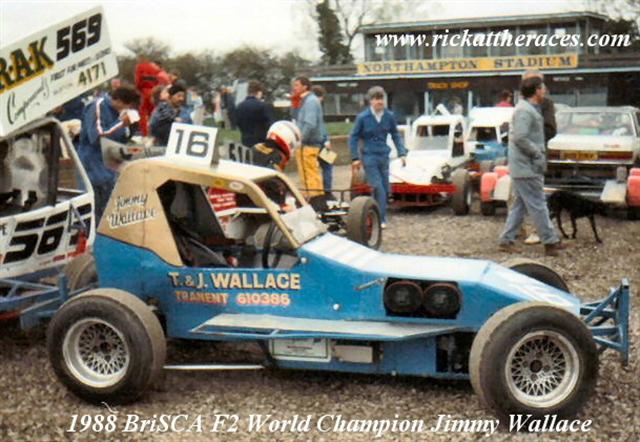 The medics hadn’t cured my kidney stone problem and on Monday (Sep 19)  I had an appointment with a specialist which happened to be just two days before we were due to head out on our annual racing vacation to the Netherlands.

The Long Track World Final was at Baarlo on Sept 25 and we took advantage of a special ‘Five Day return’ that the Sally Line were offering.

Their boats sailed from Ramsgate in Kent to Dunkirk in France and this was the first time we’d used this crossing. We took the 4-30 pm ferry on Wednesday Sept 21 and landed in France a couple of hours later .

With our caravan on tow , we drove up as far as Eindhoven in the Netherlands before parking up for the night.

On Thursday morning we made the short journey to Baarlo where we booked into our usual site (De Bercht). 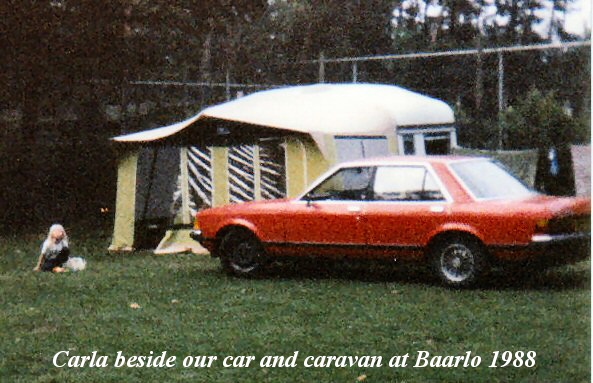 On Friday our friends the Boschma’s from Nijland arrived so we joined them and their gang from Friesland.

There was a lovely tropical swimming pool on the site that overlooked the race track, so Carla and Willem’s girls spent plenty of time in there. 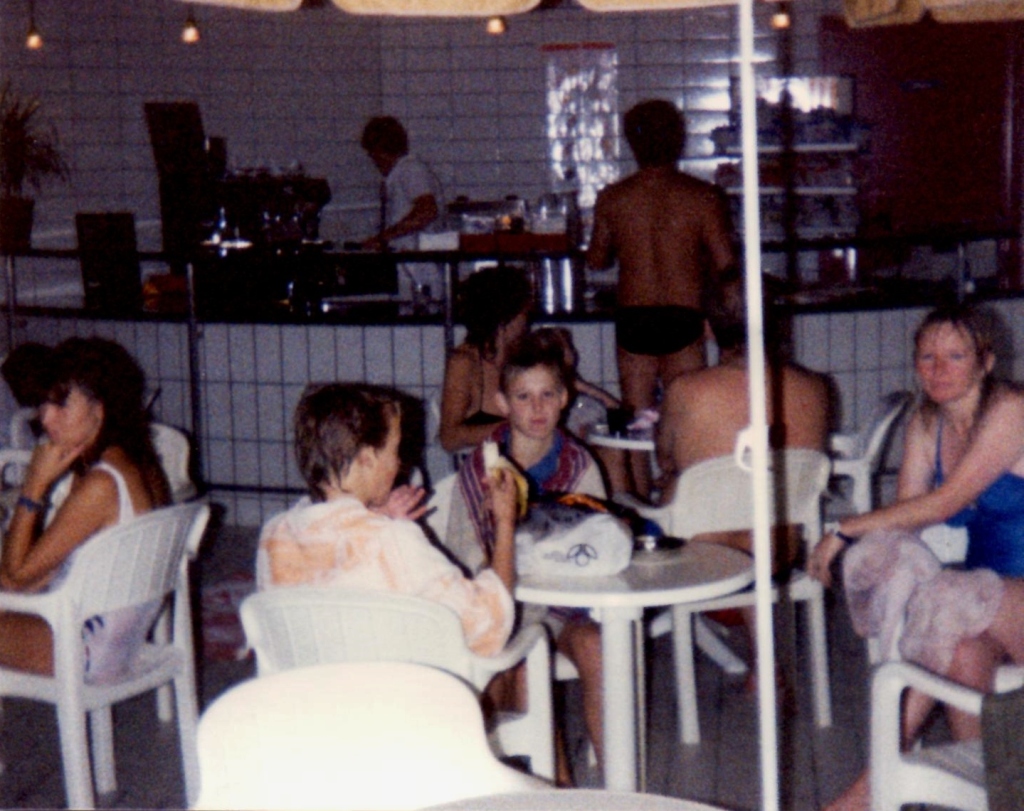 Willem had sold his stock car and had originally planned to be at Baarlo as a spectator, but things were to change !

Peter VD Berk, a race car owner was there with his Rien Rutjens built car and offered Willem a drive. VD Berk had previously had Mat De La Roy (7) driving it , but was looking for a change, so Willem drove it that day. 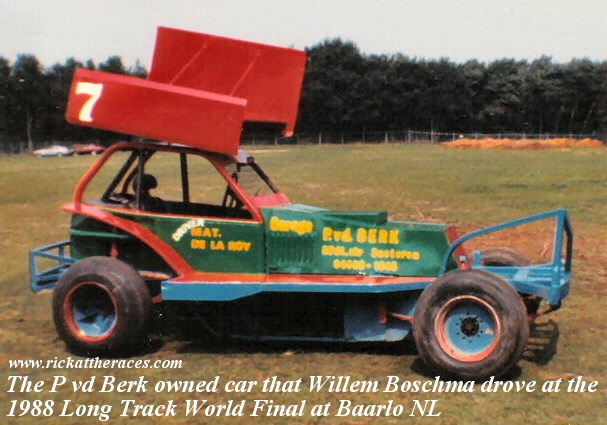 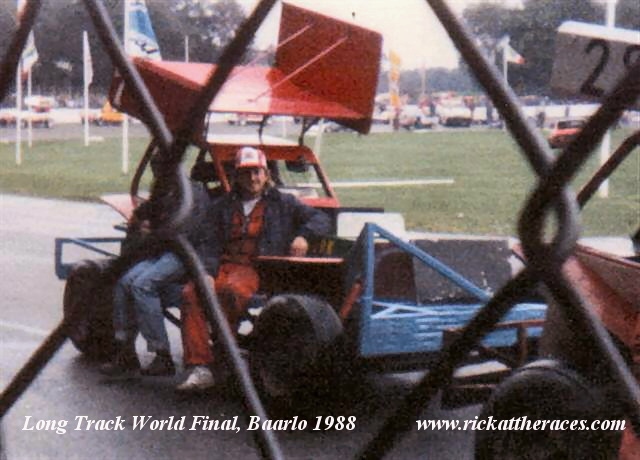 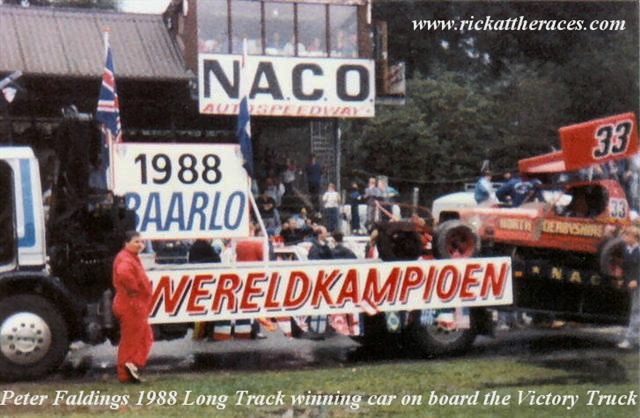 On Saturday Oct 1 we were back at Coventry for the monthly session of BriSCA F1’s, then soon after, on Oct 5 we learned that our Granada was to be ‘written off’ by the insurance company. The damage caused by the tractor , hadn’t been bad and we were hoping to have it repaired . To our dismay the insurance assessors decided it would cost more to put right, than what the car was worth,  so classed it as a ‘write off’. This was totally wrong in our opinion and we tried to fight the decision, but in the end , we gave up. We were forced to part with it and reluctantly accepted their compensation offer.

We hadn’t expected this so hadn’t got a replacement lined up,  which meant we had to temporarily rent something.

Our nearest car hire place was in Old Stratford which also happened to be the local YUGO dealer. These little cars were built in Yugoslavia before the country went to civil war and got divided into smaller states.

We had a YUGO on rental for a few weeks until we bought a Volvo via a private sale newspaper advertisement. 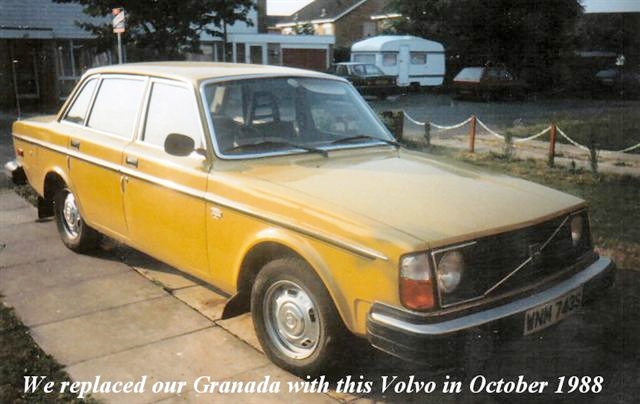 Before the 1988 racing season came to a close I attended Brafield (16 Oct and 6 Nov), Mildenhall (30 Oct) and Long Eaton (12 Nov) before ending my year at the Scunthorpe Stadium on 19 Nov.

Scunthorpe, a shale track had just finished it’s inaugural  season under the BriSCA banner and this was my first ever visit. The winner was Graham France (216) 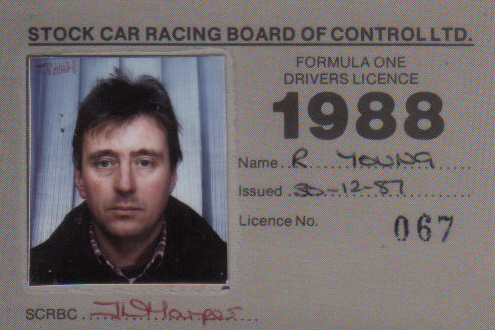