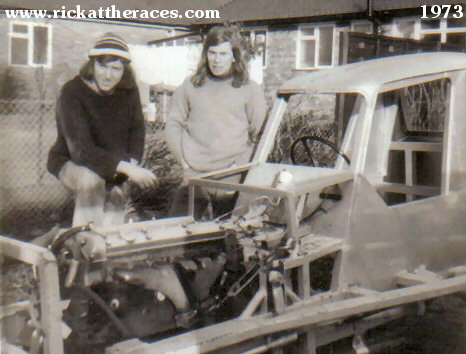 1972 had been a busy year for me where I’d started traveling to most tracks on the BriSCA circuit .

Joining me on many of those trips was my buddy from motorbiking days, Chris Pickup. He was an engineer with the Post Office.

We’d both since moved on to four wheeled transportation, I had a Series V Hillman Minx and Chris had Vauxhall FB Victor.

During the year we discussed the idea of sharing a stock car and taking part in BriSCA F1 . At this time there were two brothers Barry and John Rogers of Northampton who shared a car. They took it in turns to race and had bolt on tin plates to change the names and numbers between race meetings. We thought we could do the same.

I was working at the Watling Street Tool & Guage Co in Markyate , Hertfordhire and parked next door, at Harts Motors , in the same yard where Colin Hayward # 167 kept his stock car,  was a rolling chassis.

We discovered that the former Terry Brandon # 135 car was for sale. It had previously been raced by a bunch of local racers, including Nigel Harradine # 314 and Ray Wilde # 91. 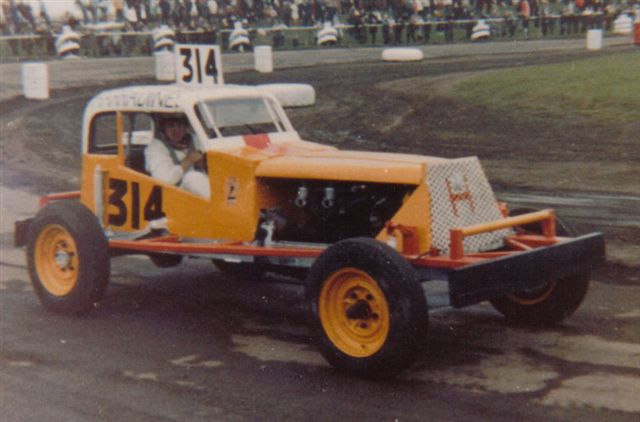 We Struck a deal and at the beginning of 1973 we became the owners. I think we payed 45 pounds for it .

Shaw Bros Recovery services of Markyate towed to Chris’s grandmother’s house in Stanbridge, just out side Dunstable where she had given us the use of her garage.

The rolling chassis had previously been fitted with a Jaguar engine so that was the next thing on our shopping list. Our friend Tony Allen # 348 put us in touch with one of his buddy’s who had a low mileage 3-8 litre S-Type for sale, which we bought for 65 pounds.

We picked up a spare gearbox from one of our biking friends who’d since moved on to an old Jag. Actually we took the whole car from him. 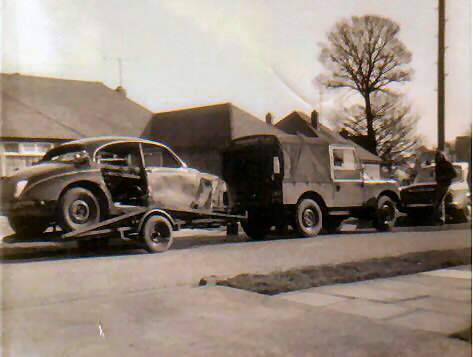 At this time Chris and I had no tow hitches fitted to our vehicles so Mick Bird from the Plume Of Feathers helped us out. Mick had a Land Rover ( powered by a Vauxhall Cresta engine) so he towed the Jag back from Letchworth where it had been parked. Accompanying us that day was John Nelsey, another buddy from the ‘Plume’ and a work mate from the WST&G.

The construction of our first racer was a long drawn out job. Everything was new to us and we had a lot to learn. As well as our building project we were still big race fans and once the season started much of our spare time was spent at the races.

Tony Allen had gained quite a following and a group of fans started the Tony Allen Supporters Club at the start of the year. I became involved in that and attended the monthly social nights at The Bell, a pub in Toddington (Beds) where I made a lot more new friends. One family in particular, were Bob and Anne Cowell from Pullox Hill (Beds) and their daughters Barbara and Cheryl.

During the months of March and April, I attended races at Harringay, Brafield, Long Eaton, Belle Vue, Coventry, Snetterton, Rayleigh, Bristol, White City (Manchester) and a brand new stadium at Stoke on Trent. Although it was tagged as Stoke, the location was in the suburb of Newcastle under Lyme and was another addition to the Mike Parker promoting empire. It was 370 yards in length, had a granite and shale surface and (I’m guessing) was on the site of a ‘Pottery’s’ kiln waste dump. I remember my first visit on April 29 very well, there was a terrible dust problem where Stuart Smith # 391 who took the win. I did return a few times over the years but it was never one of my favorite tracks.

For most of the year, it was pretty much ‘business as usual’ attending all my regular tracks while midweek summer nights were spent working on the stock car. With the Jaguar engine and gearbox fitted, it now needed some bodywork.

On the scrap heap where I worked, was an old Austin A40, formerly owned by one of the bosses. I was given the OK to use parts of it, so one day during my lunch break, I chopped off the roof. 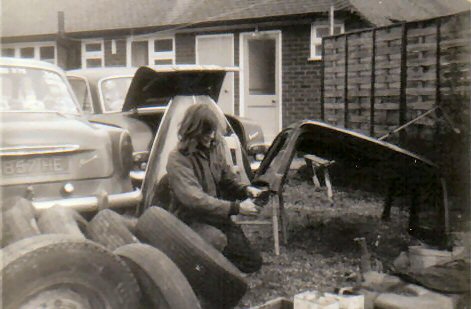 It was  then taken to our workshop/garage in Stanbridge where we cut it down even further to fit over the steel box roll cage.

The roll cage was new, and had been constructed ( like the chassis) by Pete Shepherd # 144. The guy we bought it from, had got Pete to refurbish the cage, before losing interest and selling it to us. A few scrap pieces of sheet metal were acquired for the side panels but we were still short of material for the bonnet (hood) . We were building the car as cheaply as we could, and couldn’t afford new stuff. The problem was solved when our buddy Geoff Dunsby ( who helped with the construction of the car)  told us of his Dad’s old BMC Mini Van that was being scrapped. We cut off the large flat area of its roof to form the stock cars bonnet. 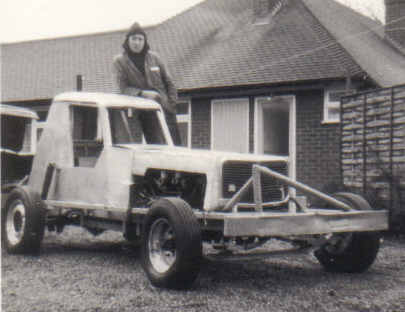 To finish it off, Chris managed to find a radiator grille from the latest model of the Vauxhall Victor. Bob Cowell who we got to know through the Tony Allen Supporters Club had his own bulk feed transport company and one of the farms he delivered to was owned by former BriSCA F1 driver Don Evett # 349. 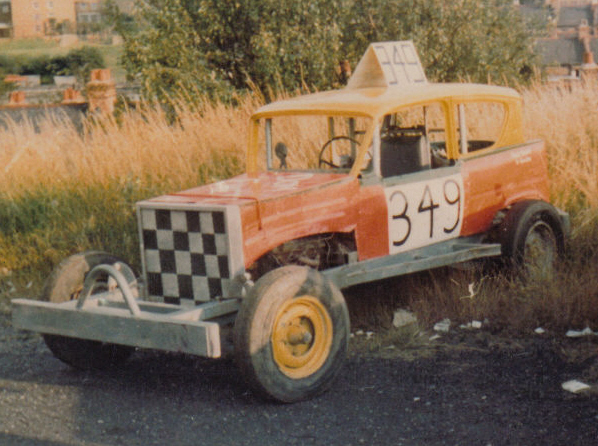 Bob put us in touch with the recently retired Don, who had some equipment for sale. We drove over to his farm at Aston Clinton (Bucks) and bought his spare axles and wheels. Like most stock cars of the time, the axles, which were becoming harder to find, came from 30 cwt Morris LD trucks.

The construction project by the two rookie builders was taking a long time and it was obvious we wouldn’t be finished before the end of the season.

On June 9 the BSCRSA were holding the annual Fan Club Derby at Long Eaton and the Tony Allen Supporters club were to be represented.

A group of us got together to decorate his stock car for the pre race parade.

Our theme was King Neptune. A large lighthouse was erected on the roof and the rest of the car covered in tarps to look like rocks. A small boat with some young fishermen was towed behind, while Tony sat on the car dressed as King Neptune and Barbara Cowell was a Mermaid on the rocks.

If my memory is correct, we won the parade competition with Ray Watkins # 362 winning the Derby race.

The first of the BriSCA F1 World Championship Semi Finals was held at Long Eaton ( July 14) and I was there to see Dave Chisholm # 252 take the win. This year he and Chick Woodroffe # 1 were sharing the driving of a former Stuart Smith, Doug Cronshaw built car.

In July I took a racing vacation to the west of England. Brian Yates, joined Chris and I for this camping trip to Devon. We based ourselves in Brixham and attended races at the Newton Abbott Racecourse (July 25) Bristol (July 29) and St Austell (July 31).

Newton Abbott and St Austell were both new tracks for me and featured the BriSCA F2’s . At this time the BriSCA F2’s were going through a period of decline around most of the UK ( due to many new hi-tec cars and lack of interest by fans) but in the ‘West Country’ they were still very popular.

The paved 330 yard Newton Abbott track was located in the middle of the towns Horse Racing course. It ran on Wednesday nights during the summer and attracted many of the holiday makers from nearby Torquay. The St Austell Stadium in Cornwall , like Newton Abbott was another BriSCA F2 stronghold and promoted by New Zealander, Trevor Redmond. The man to beat at both tracks was BriSCA F2 legend Bill Batten # 667. 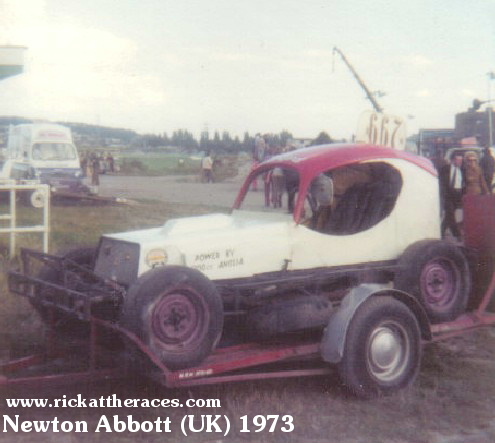 After returning home to Bedfordshire, I made trips to Coventry , Brafield , Cadwell Park, Nelson and White City before attending the second BriSCA F1 World Championship Semi Final at Brafield (Aug 26) . Mick ‘Noddy’ Noden # 306 won this after favorites, Woodroffe # 1 and Allen # 348 ruined their chances in a tangle. 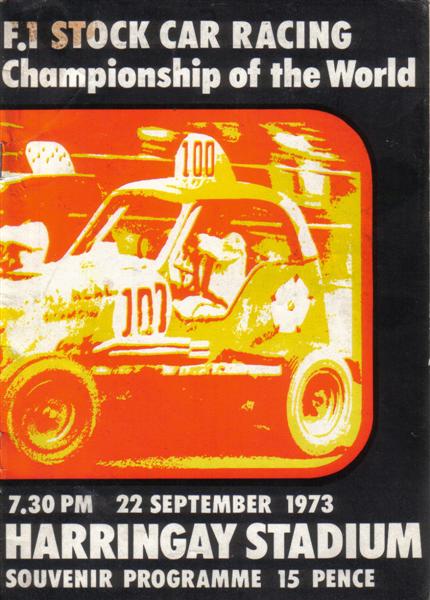 The big race in 1973 was held at the Harringay Stadium in London (Sept 22) and was won by Dave Chisholm. 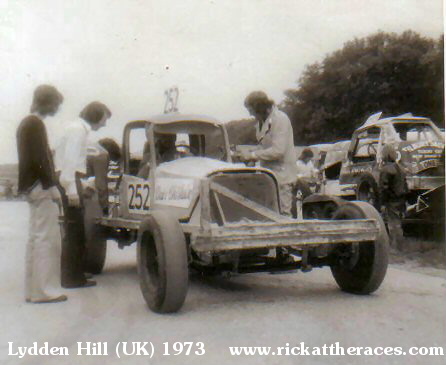 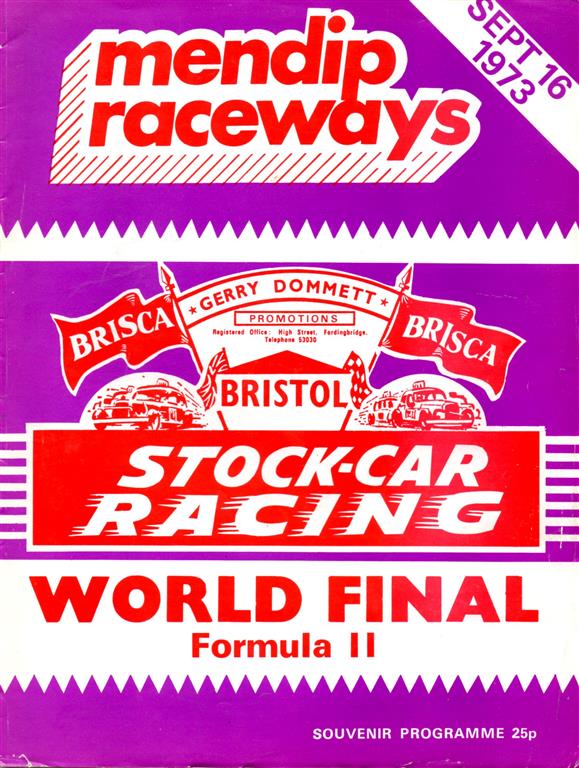 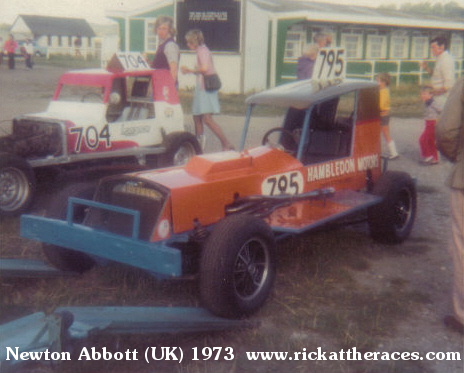 I wasn’t in attendance at either of the latter events as my main interest at the time was BriSCA F1.

Towards the end of the year I was once again put in the position where I had to look for another job. The Watling Street Tool & Guage Co where I’d been working, were to close down. I was now nineteen years old and half way through my second attempt at an apprenticeship.

I accepted an offer as a mechanic with the Export & Transport Co ( FKA Dunstable Transport) where the plan was to finish my training. Working on trucks was a lot different to cars. (lots of grease and dirt !) and the pay was less than I’d been getting before. One of the Plume of Feathers gang in Markyate ,Graham Timberlake, was one of the company drivers, and I soon found out from him that more money could be earned out on the road. Within a couple of weeks I’d transferred from the workshop to driver and said goodbye to any idea of finishing my apprenticeship.

In those days it was OK to drive an under 3 ton rigid lorry ( straight truck) at my age. The first lorry I drove was a Commer box van (cube truck) and I was on contract delivering cigarettes around the London area. 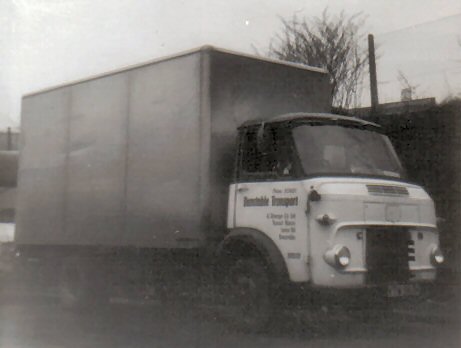 Export and General ran their own Heavy Goods Vehicle training school and had agreed to put me through the course once I reached the required age of 21.

The final months of the year saw me at all my usual tracks as well as a couple of long distance sorties up to Belle Vue and Stoke.

By the end of the year the stock car construction was coming on, and we looked forward to making our debut in the coming season.