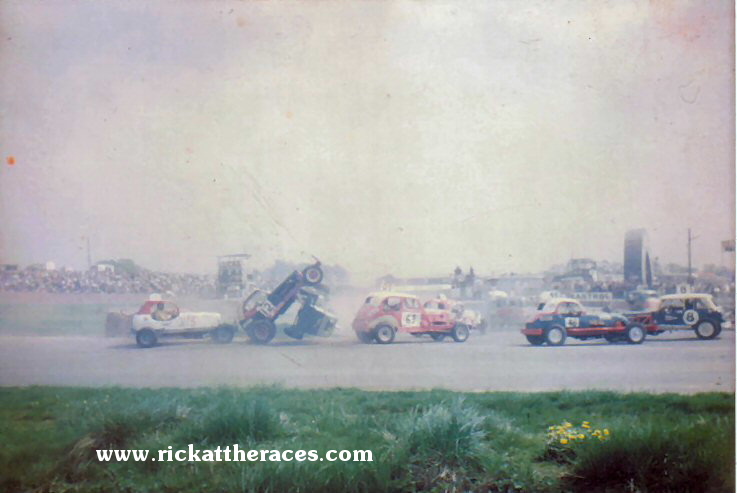 In February, I turned 16 years old which was the legal age to ride (under 250cc) motorcycles in the UK and soon after my birthday I was the proud owner of a 175 BSA Bantam. 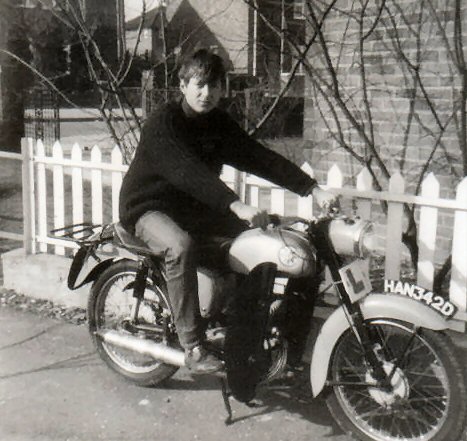 I was still attending the Millvale Secondary School in Dunstable and was one of the few lucky pupils with their own transport. My new acquisition also coincided with my new desire to not only chase races, but to chase girls too !

It was my final year at school and before the year was over, I was out in the open world,  in a full time employment.

I970 was also the year that the Young family would be moving out of Dunstable.

I was still on ‘L’ plates ( as a learner rider) when the racing season opened so I was still restricted to where I could go.

Brafield was OK ,  through the country lanes, but Harringay was not really viable as ‘Learners’ were prohibited from using the M1 Motorway, which was the principle route to London.

That meant I still went by train (the ‘Bed Pan Line’) to that track, but parked my motorcycle at Mick Lovetts place in Luton.

Early season visits to the Foxhall Stadium at Ipswich were also made by car on family trips to visit relatives. 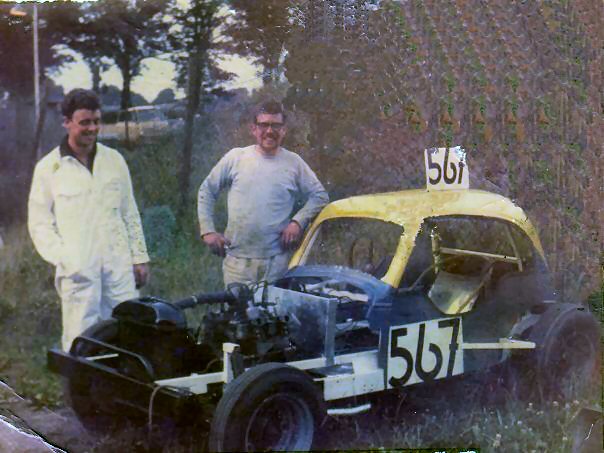 Later when I started racing a BriSCA F2, I took over Mick’s old number of 567

When Mick wasn’t racing his F2 he was a big follower of BriSCA F1 and I started traveling to the races with him and his family. Mick sadly passed away in the 1980’s but his daughter, Mandy is still very much involved in the BriSCA F1 scene today.

Her husband the late Ray Froggatt, was a long time mechanic for Willie Harrison # 2 and in then Willie’s son Paul # 2.

My first ‘new track’ of 1970 was the Mallory Park Circuit in Leicestershire and it was done with Mick and family in his Wolseley 1660. 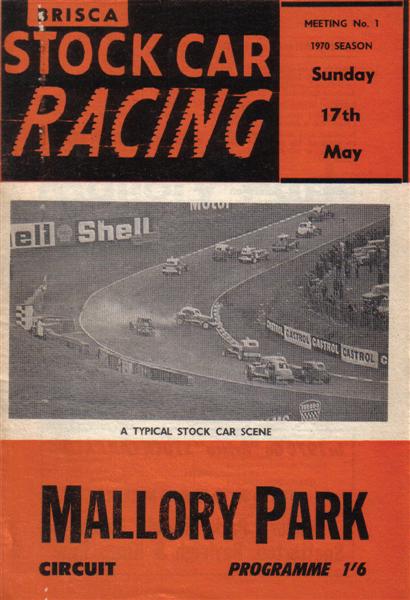 My childhood racing hero, Chick Woodroffe # 1 had become a promotor and his Promotasport company was responsible for stock car racing at Kings Lynn, Rayleigh ,Brands Hatch and Snetterton.

In 1970 the Mallory Park Circuit in Leicestershire,  came under his banner and on May 17 we were there for the inaugural meeting.

My memory of that day was of a crash on the first lap of the first race that involved Pete Shepherd # 144 going sideways and being ‘rolled’ by Mal sample # 12. ( In later years Pete became a good friend, and sadly passed away in the 1990’s) 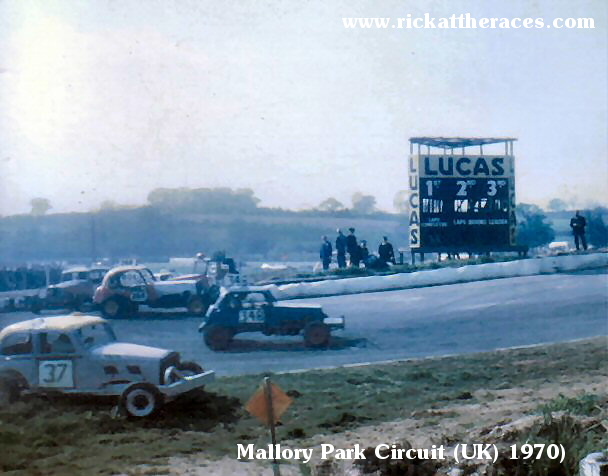 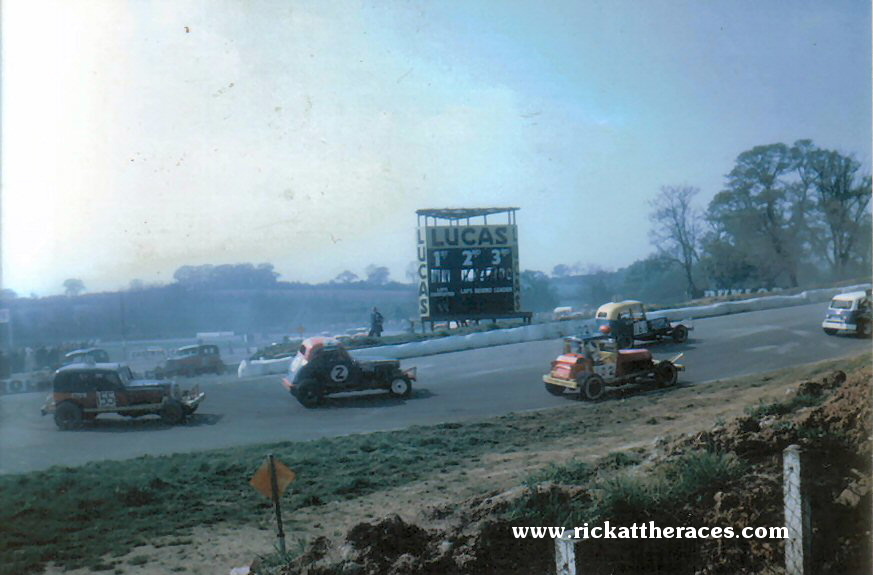 I rode my motorcycle to Mick’s place in Luton and got rides to the races at Coventry quite a few times with during the summer.

On Saturday Jun 13, I joined him for a trip to the F2 World Championship Qualifier at the Rayleigh Stadium where he was competing. 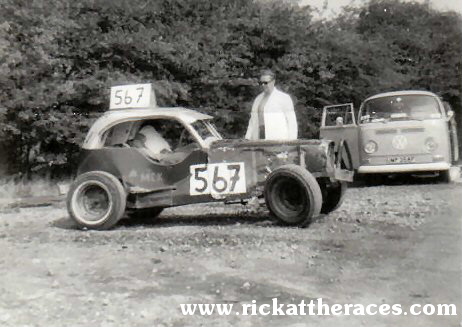 For the first time ever, I donned overalls ( boiler suit) , or coveralls as my North American friends would say, and became one of Mick’s mechanics (crew) for the night. ( carrier of water to fill up the rad ! ) 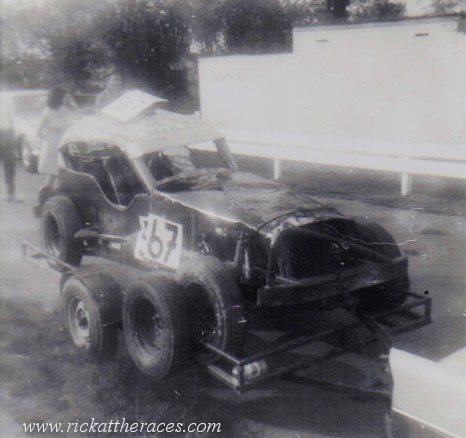 The following week I did one of my craziest stunts of all time, using public transport. I had never been to the Crayford Stadium in Kent, I’d heard lots of good stuff about it and it ran on Wednesday nights. 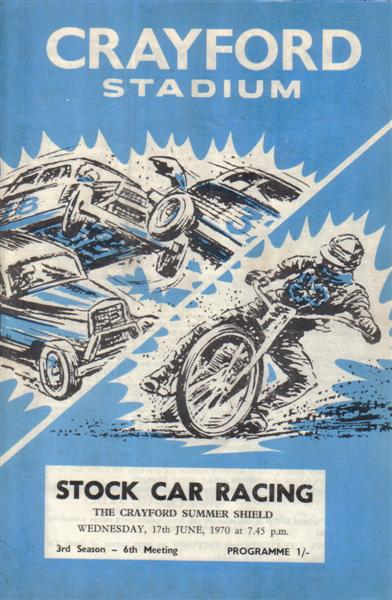 On June 17 , I left my motorcycle at Mick ‘the Beards’ place and we got a bus to the Luton Rail Station.

From there we got on the ‘Bed Pan Line’ to London, where we took the ‘Underground’ ( subway) to Victoria.

At the Victoria Bus Station we boarded a London ‘Green Line’ Bus towards Kent.

It traveled along the Old Kent Road, and eventually we arrived in Crayford.

The logistics worked well for the outward-bound journey, but it looked likely that we’d have to sleep on the platform at St Pancras Station and wait for the early morning train in order to get home.

The racing was first class, with plenty of action on the 310 yard shale track, and once again it was Stuart Smith # 391 who won the final.

Our ‘getting home’ situation was solved when one of our local BriSCA F1 drivers, Tony Allen # 348 came to our salvation.

Mick had known Tony vaguely, and after chatting to him in the bar afterwards and explaining our plight, he offered to give us a ride home. We squeezed into the back of his Vauxhall Cresta tow car and were soon heading northbound through the Blackwall Tunnell towards home.

This would be the first of many times I’d be using this passage under the River Thames to go racing. Tony later became a good friend and was very helpful when I got started in racing. He and his family emigrated to New Zealand in 1975 where he took up sprint car racing.

On Sunday June 21 another meeting was scheduled for Mallory Park, but I gave it a miss, and joined Mick Gale who was racing his BriSCA F2 at the Matchams Park Stadium at Ringwood. This was my second visit to Matchams.

During the summer I left the Mill Vale Secondary School, and was offered an apprenticeship as a Fabricator and Welder, at Bagshaw & Co, in Dunstable. This didn’t start until September, so until then I got a part time job working at the Granada Motorway Services on the M1 at Toddington. 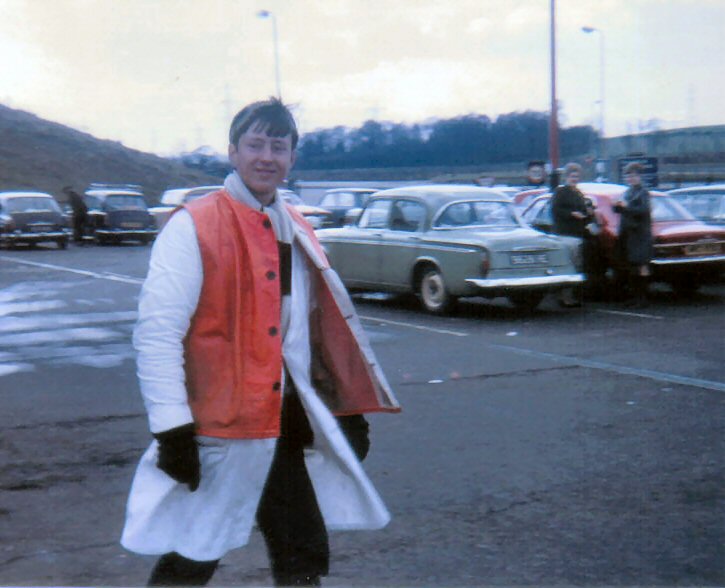 I did everything from car park duty to serving food and washing dishes.

While I was working there, our family moved from Dunstable to the village of Totternhoe, which is not far away, and just outside the town.

I soon made new friends who started attending races with me. Three of them , Lynn ( Chandler) Longden ,  Chris Pickup and Kev Moriarty, I’m still in contact with today.

For the rest of the year my usual tracks of Harringay , Brafield and now Coventry, were visited on a regular basis. One new track I did on the ‘Bantam’ was the Wembley Stadium in North London (Aug 8) . One of my biking buddies, Nick Tallett, and myself, took the old A5 ‘Watling Street’ to London (avoiding the M1) to watch the ‘Wembley Lions’ Motorcycle Speedway in a League Race.

Having my own transport meant , I attended quite a few Brafield Banger races in 1970.

On Sunday afternoons when the stock car action was taking place far away from home, I simply got on my bike and watched the Bangers at Brafield.

The 1970 BriSCA World Finals were both held at the Harringay Stadium, and being my local track, of course, I was there.

The BriSCA F2 World Final was held on Sept 12 and won by Dave Chisholm # 552 of Wheathampstead , Herts . 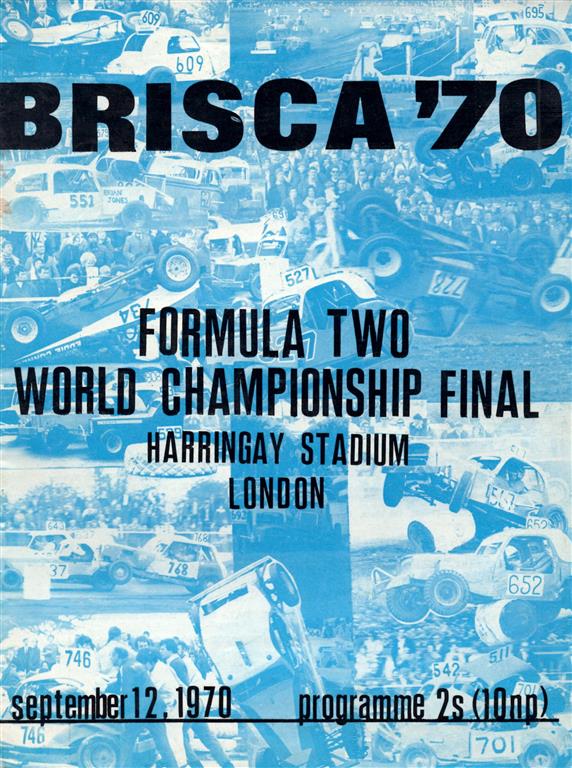 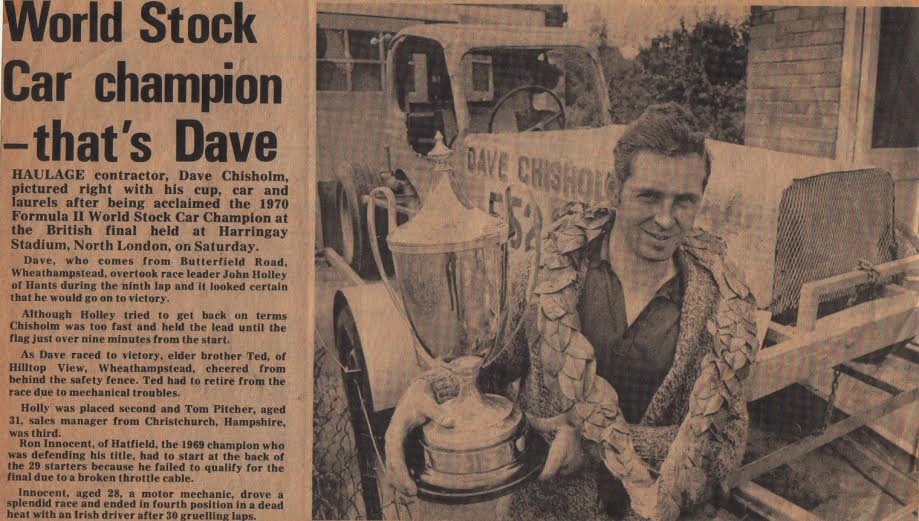 Meanwhile on the same night, the other side of London, the Spedeworth Superstox World Final was taking place at the Wimbledon Stadium. This was won by ‘Biffo’ Sweeney # 530 of Dorking, Surrey. 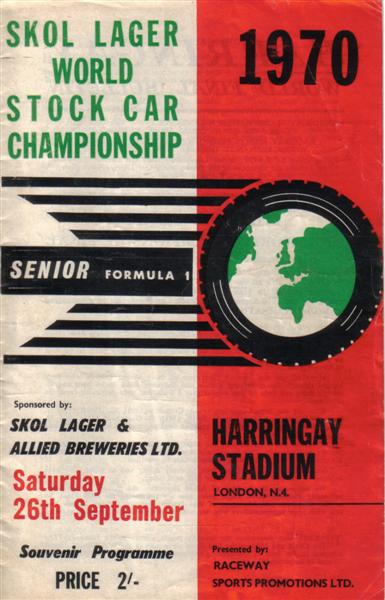 The rest of the year was spent going to my local track,  Brafield  and hanging out with my motor biking friends.