In March 1981 Pat and I were married and later that year we bought our first house in Maidford , Northants. 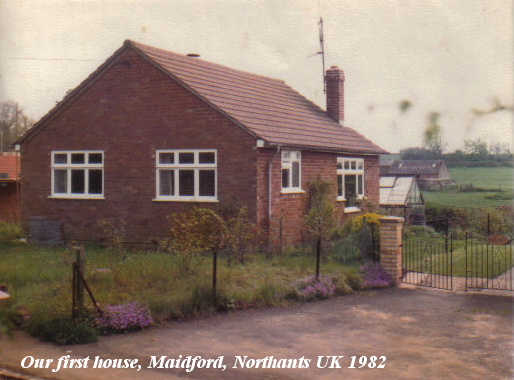 At the time, we were both commuting to Milton Keynes each day for our jobs in the trucking industry.

I was working for Darbys Transport , driving Atkinsons , Seddon-Atkinsons and Leylands on contract to BEJAM who were the UK’s biggest freezer food outlet.

In 1982 life started off much the same, with my racing trips mainly confined to our local tracks of Brafield , Leicester and Coventry. I did however make two early season long distance trips. 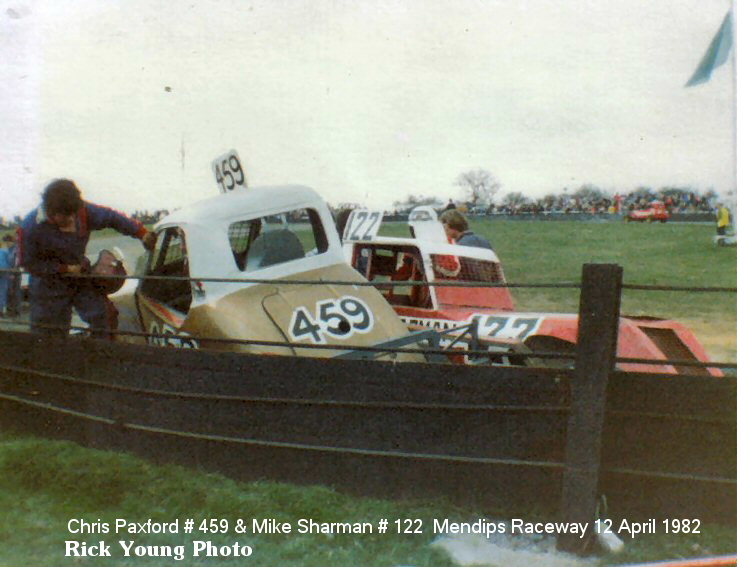 One of them was the to the Mendips Raceway near Bristol on April 12 for their Easter Monday BriSCA F1 meeting.

The other on May 29 was to the Crewe Stadium, in Cheshire, which was a track I’d never visited before. In 1982 it was running under the Mike Parker Promotions banner and was a recent addition to the BriSCA fold. 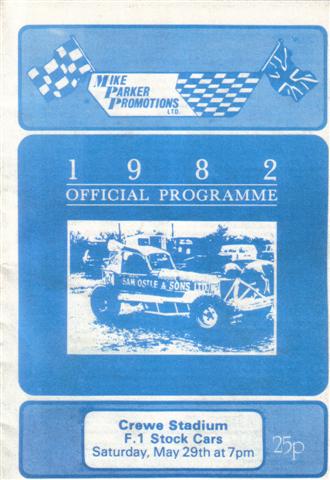 The track which is now defunct, was located right in the town center and the surface was shale (dirt). On that first visit I witnessed something I’d never seen before which in present times I now take for granted . As I entered the stadium close to the third and fourth bend, I was bemused to notice, some of the race fans wearing industrial safety glasses ( some were even wearing crash helmets with visors ! ) . Crewe was always regarded as one of the fastest ‘shaleways’ in the country and I soon discovered why all the protective eye-ware was being worn. As the mighty F1 Stockers powered their way around the bends, all sorts of dirt, dust and rock debris was thrown towards the crowd. Now, many years later as I watch Dirt racing in North America a pair of safety glasses are standard equipment for the dirt race fan. Winner of the final that night was veteran driver Willie Harrison (2) of Rotherham, Yorks.

While on the subject of defunct tracks, I must mention another place I visited in 1982, during the course of my working day. My job for Darby’s Transport not only involved delivering to the BEJAM stores, but picking up from their suppliers too. One of these , was located just off the Old Kent Road in South East London, beside the site of the former New Cross Stadium. This was the place where the historic first ever UK stock car race took place on Good Friday 1954 ( I was just 2 months old at the time ! ) . The old stadium was located in Hornshay Street and right next door to the ‘Den’, home of the Millwall Football Club . 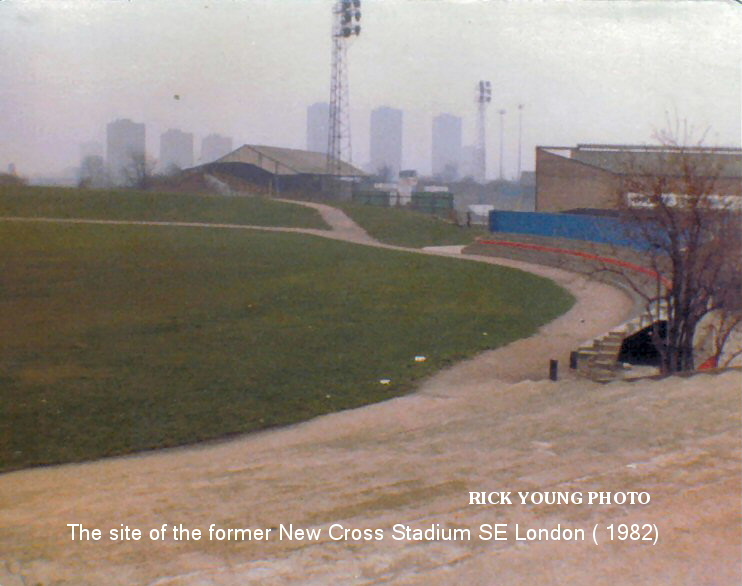 New Cross Stadium had now been demolished and turned into parkland, but the layout of the track could easily be visualized by the grass bankings and the ‘oval’ like appearance.

As mentioned in the 1981 report, my old Beds & Herts club friend Brian Bedford (209) was now living in nearby Upper Stowe close to Weedon. He had quit racing and joined the staff at the Brafield Stadium. He helped track caretaker ‘Yorkie’ Dry with much of the maintenance work.

On racedays , he’d be working on one of the tow trucks and I’d go along to a give him a hand.

Included in the program for Brafield’s July 24 staging of the BriSCA F1 European Championship was a novelty truck race. 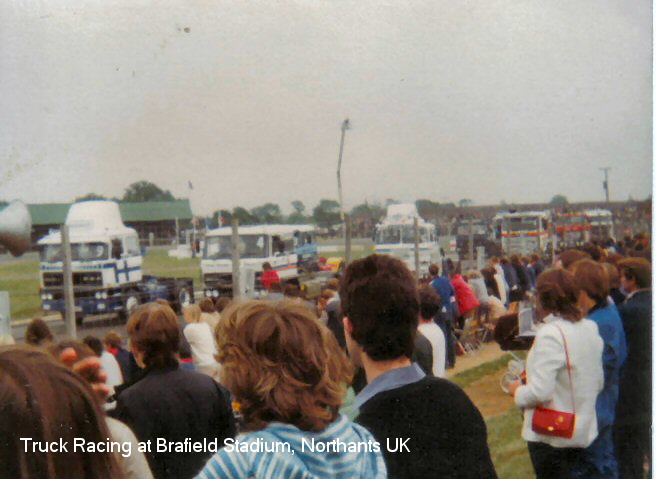 Earlier in the year, Pat discovered she was pregnant , so for the first time, we decided to miss our annual trip to Baarlo for the F1 Stock Car Long Track World Final.

Under the circumstances we preferred to stay nearer to home . The event took place on Aug 8 and was won by Rien Rutjens (15) .

Pat was no longer working so we’d lost the use of her company car Jag. We needed two cars so went out and bought a cheap Morris Marina to use as a runabout. 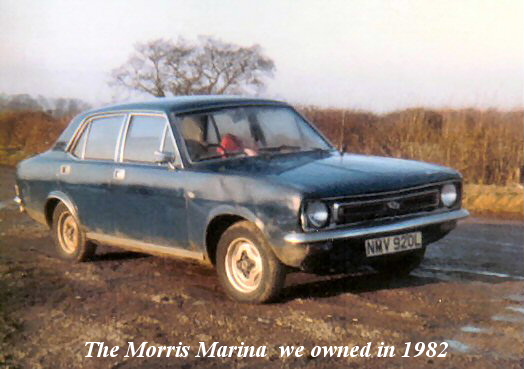 It was really scruffy looking, but the engine was a good one.

For our vacation, we decided to spend a few days on Englands north east coast at Filey, near Scarborough, Yorks. Mum and Dad had bought a newer caravan, so we took possession of their old one. Our plan was to attend the Monday night races at Sheffield’s Owlerton Stadium on the way up and Odsal Stadium, Bradford on the way home.

This turned out to be another eventful trip where we suffered en-route car problems. We set off on Sunday August 8 and on the way up the M1 Motorway close to the Crick exit, a king pin on one of our Austin Cambridge’s front wheels broke . Luckily, I managed to keep it under control and got us safely on to the shoulder.

Just like before when the Capri let us down on the M2, I had to walk across fields to reach a phone. I called my Dad who came out with his car to tow the caravan home, while the AA took care of transporting the Cambridge. We resumed our holiday the next day using Dad’s BL Princess to tow the caravan. 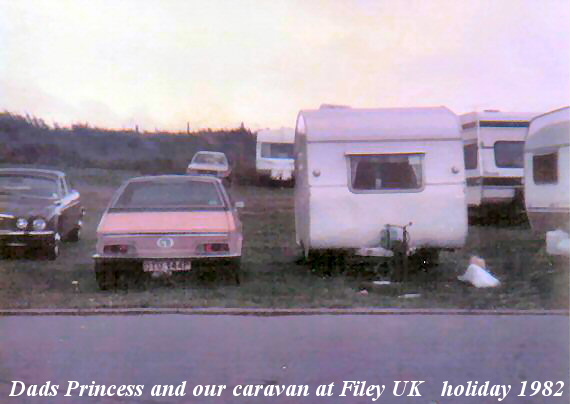 The Spedeworth organization had opened a new track at Cleethorpes on England’s North East Coast where they’d chosen to hold the 1982 Superstox World Final ( Aug 7).

I wasn’t there so missed seeing Neil Bee (482) of Norfolk retain his gold top that day.

The 1982 BriSCA F1 World Final was held at Belle Vue , Manchester on September 25 and of course I was in attendance. 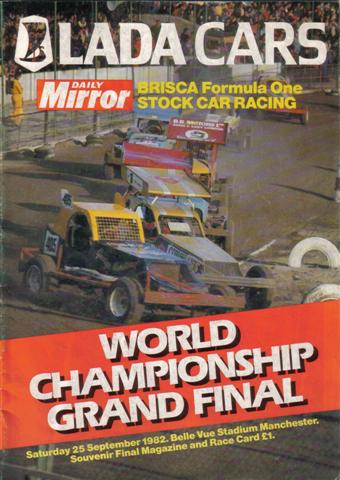 It turned out to be a ‘fairy tale’ result with Willie Harrison (2) taking the ‘Gold’. Willie had been a top driver since the sports beginning in 1954 but the ‘big one’ had always eluded him. This was his year, and the fans went wild when he took the checkers.

The USA representatives were , Wally Prescott of New Hampshire and making his second UK visit was Phil Libby from Scarborough, Maine. 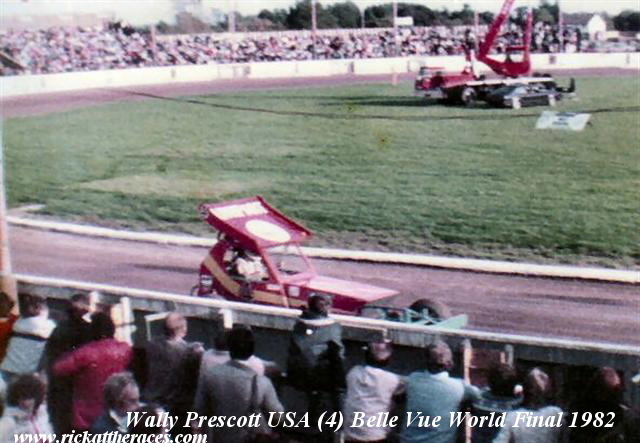 There were seven dutch representatives and after the time trials George Kroonder (217) , Leon Cox (17) , Willy Neiling ( 48) and Ger Arnts (24) went through to the big event. 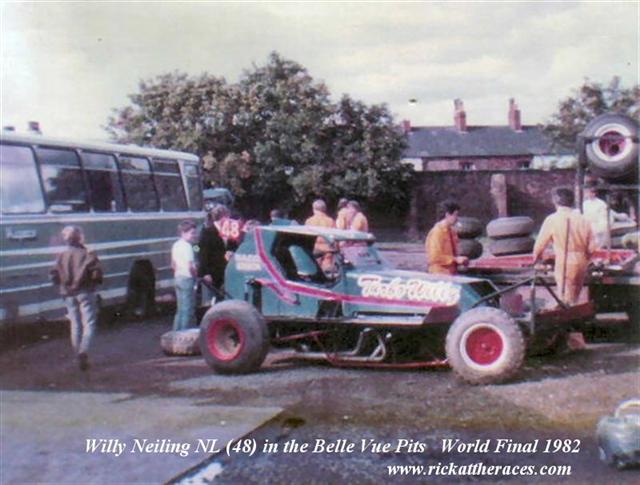 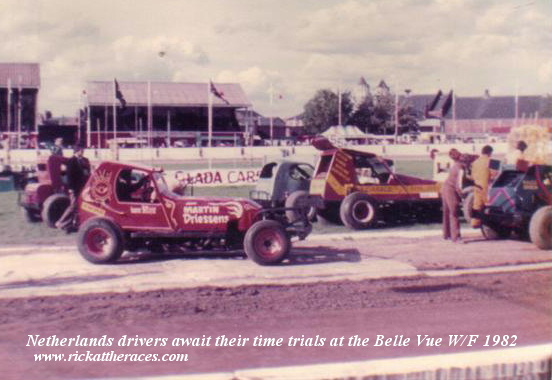 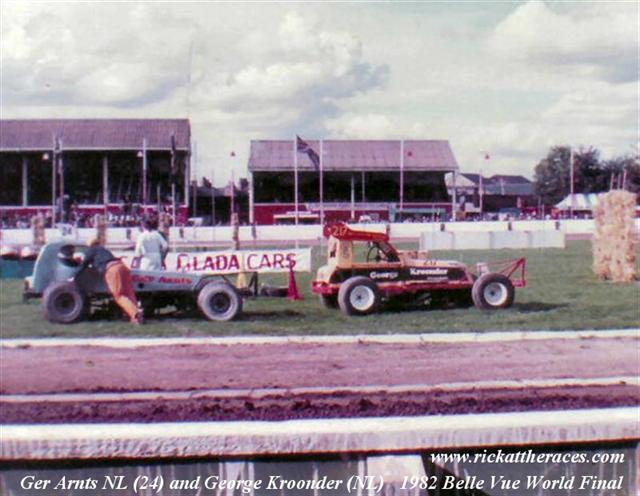 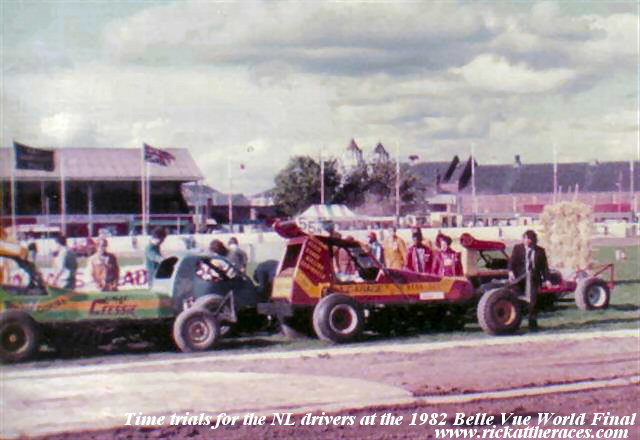 After the race , the Belle Vue management,  had organized a big celebration and disco/dance in one of the function halls. The place was packed but I got the chance to chat to Phil Libby. One of my North American ‘pen pals’ knew him, and had asked me to say hi. Many years later (2005) Phil and I would meet up again when I visited Maine to do a magazine article about the Beech Ridge Speedway.

As for Willie, he’s now long retired from racing and his son Paul is now a top-line driver . When I returned to the UK in April 2004 for the Stock Car Racing Golden Jubilee celebrations I enjoyed a good chat with him in the bar at Coventry.

My long time friend Mandy Gale runs Paul’s Supporters Club and her husband Ray, is on the pit crew.

After Saturday nights World Final at Belle Vue,  Manchester, the BriSCA F1 ‘road show’ moved down to the Brafield Stadium in Northamptonshire for some Sunday afternoon action. 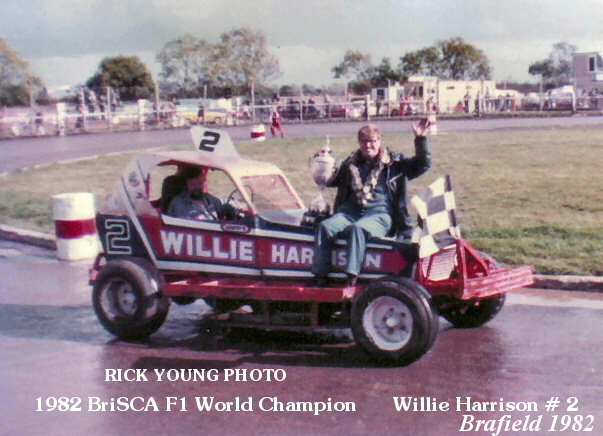 All the mainland Europe overseas entries were in attendance as well as many of their fans. 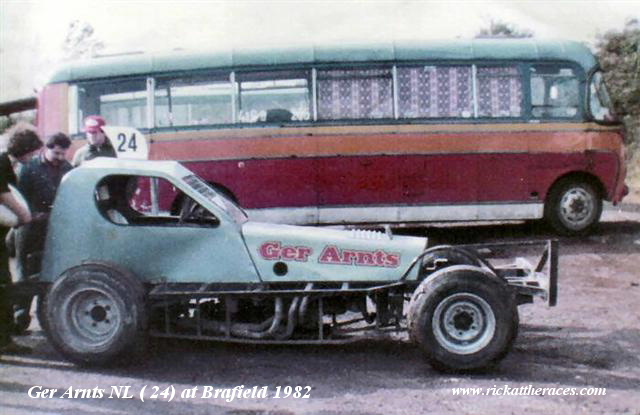 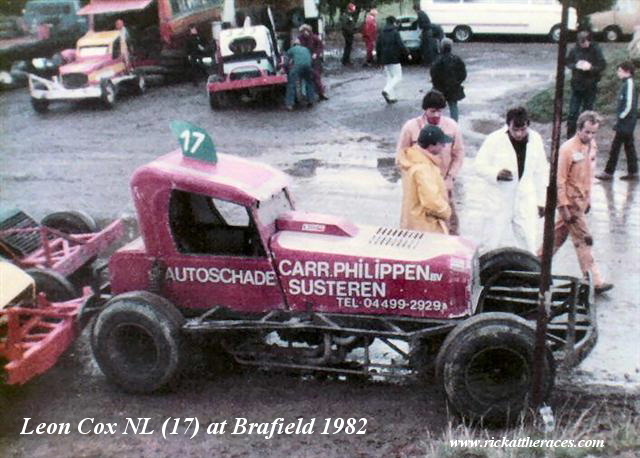 In coming years Brafield for the ‘day after’ would become a tradition.

The BriSCA F2 World Final was held at the Smeatharpe Stadium , Taunton on Sept 12 and Cornwall’s Bill Batten (667) retained his title . I never attended this one.

On December 8, Pat and I became the proud parents of a lovely baby daughter, when Carla was born at the Barratt Maternity Hospital , Northampton. We spent Christmas introducing Carla to all the family including ‘Ginger’ our cat.

Carla was not the only special gift I received from Pat that Christmas.

It had now been over two years since I last raced a stock car and for some time I’d been itching to get back on the track . My old buddy Chris Pickup (50) had now completed a full season with his Buick powered Austin Allegro, and his ‘E’ Type Jag / Triumph Spitfire bodied car had been sitting idle. 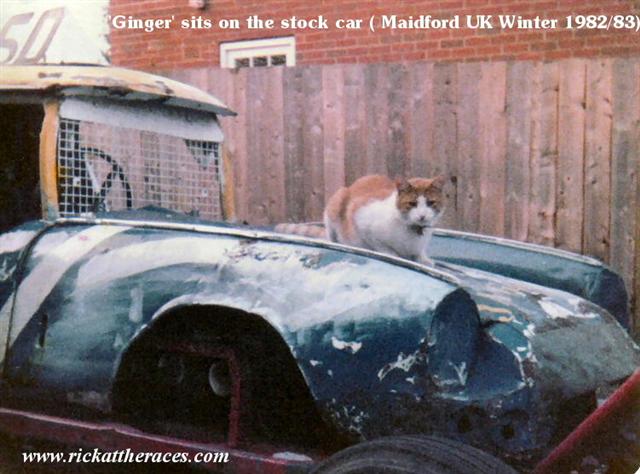 Pat struck a deal with Chris and I became the new owner. It was then towed up from where it had been parked, at Mick Black’s place in Dunstable to Maidford .

The winter months were to be spent preparing it for the 1983 season. 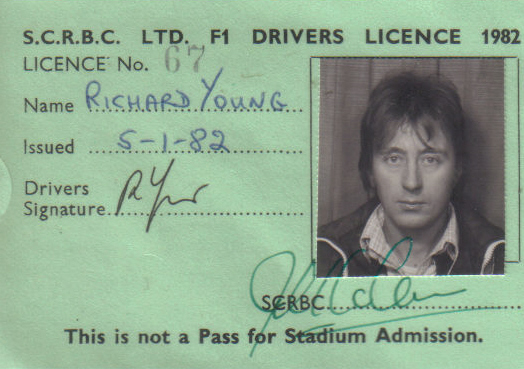