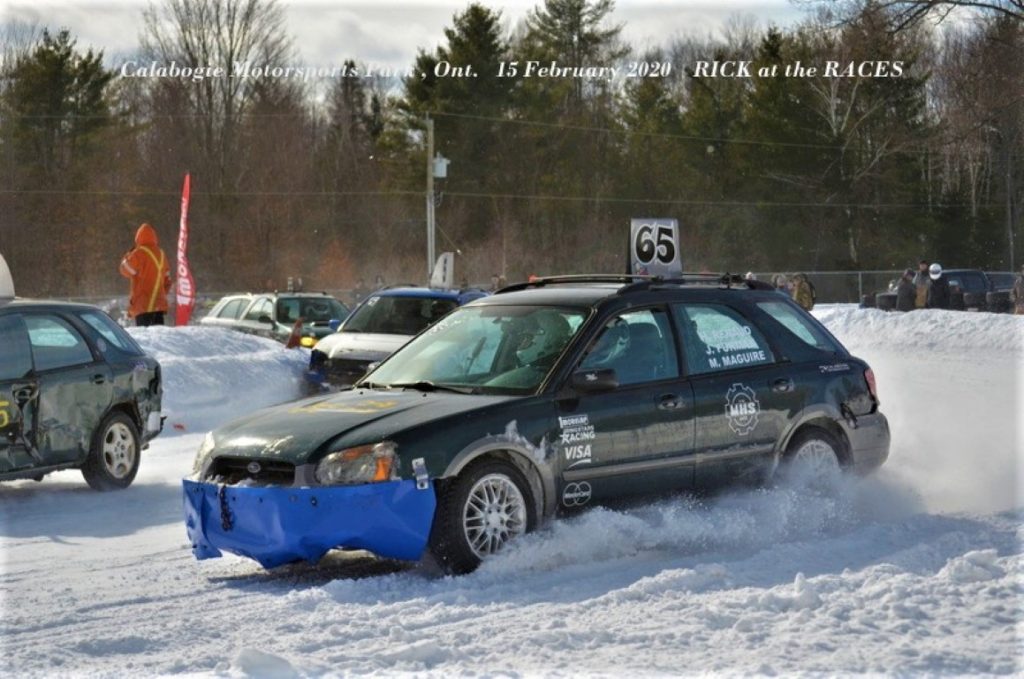 Well , as we moved into February the extreme cold weather finally arrived and at last the local Ice Racing  got under way.

After suffering from a heavy cold that seemed to drag on for ever, I got to my first ice race on Saturday 8th Feb. I drove the short distance into Montreal to the Kahnawake Marina . 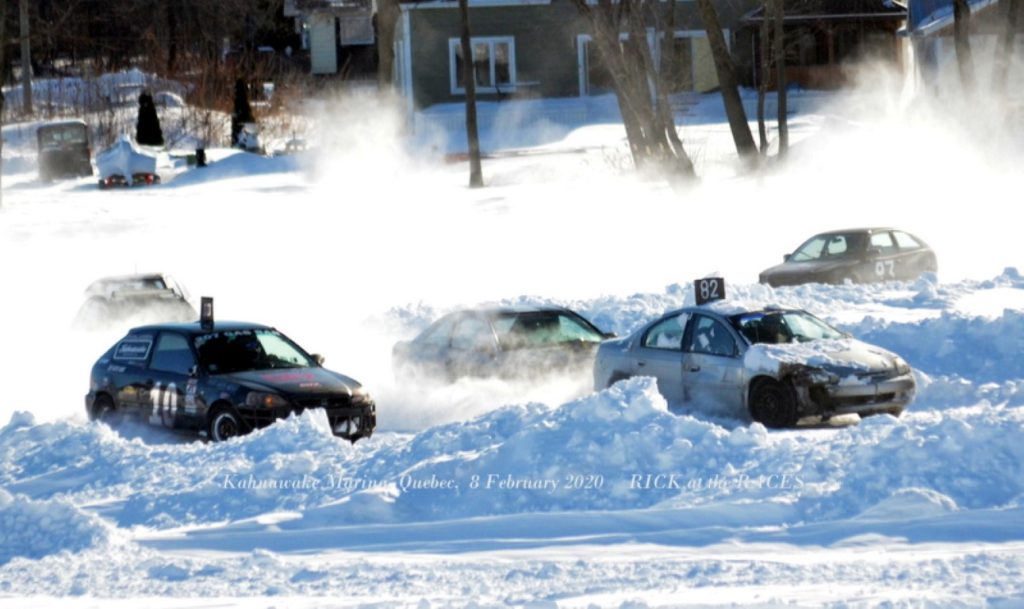 It was bitterly cold so I spent most of the time watching the racing from my car or in the canteen.

The following week end I had two events to attend.  On Saturday 15th Feb it was the start of  Calabogie MotorSports Park Ice Racing season and I set off early from my home in Cornwall to be there. I was there in good time to see the end of the morning practice session and the start of the racing at 1-00 pm. 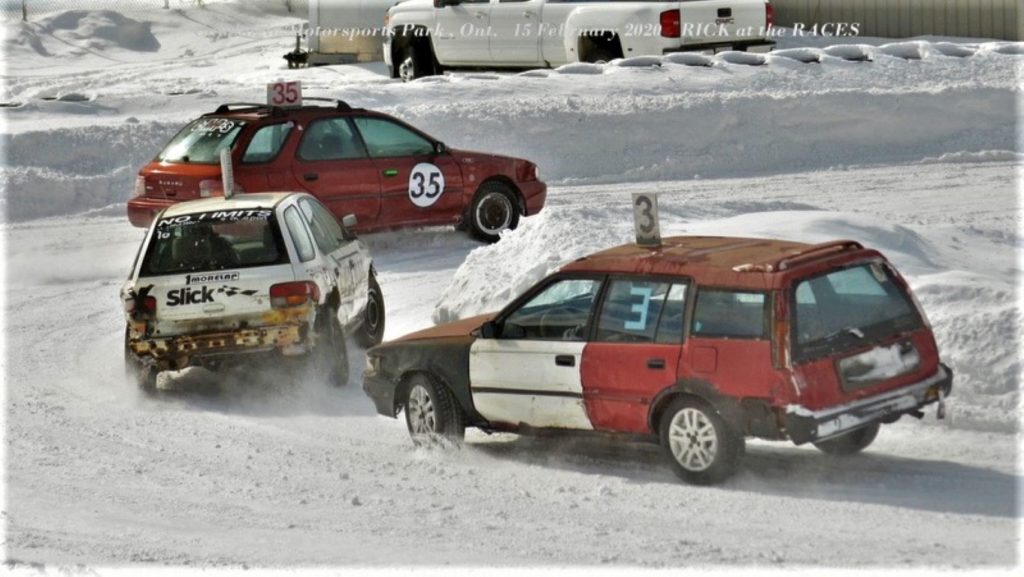 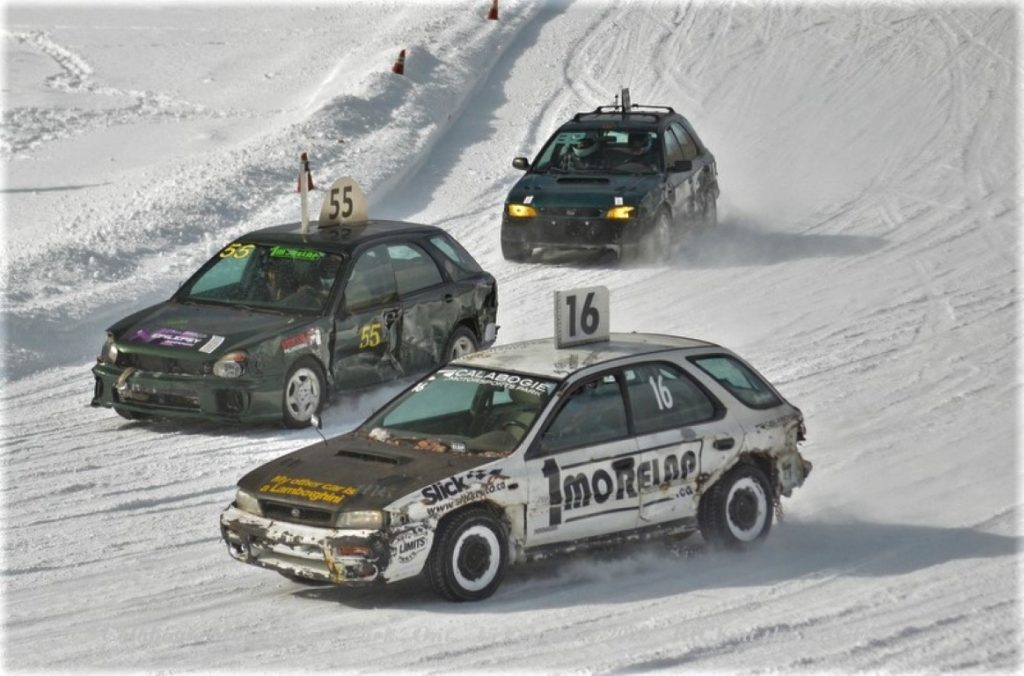 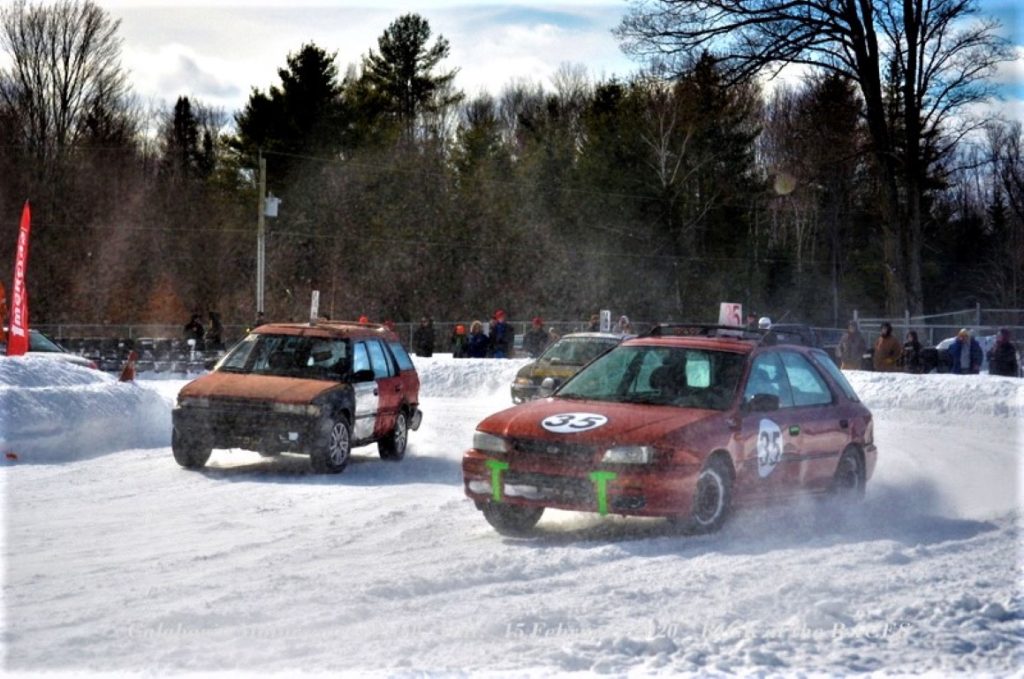 Once again I was able to park my car close to the track to keep warm in between races.

It was good to meet up with my TRACKCHASER friends, Pam and Guy Smith from Pennsylvania who had traveled up specially to add this to their TRACKCHASER totals .

I got a few pics of the races before heading for home.

Next day ,  and just a short drive from Cornwall, it was the annual Clarence Creek Winter Carnival races . I was there by mid day in time to relax and have a burger in the arena before the races got under way. 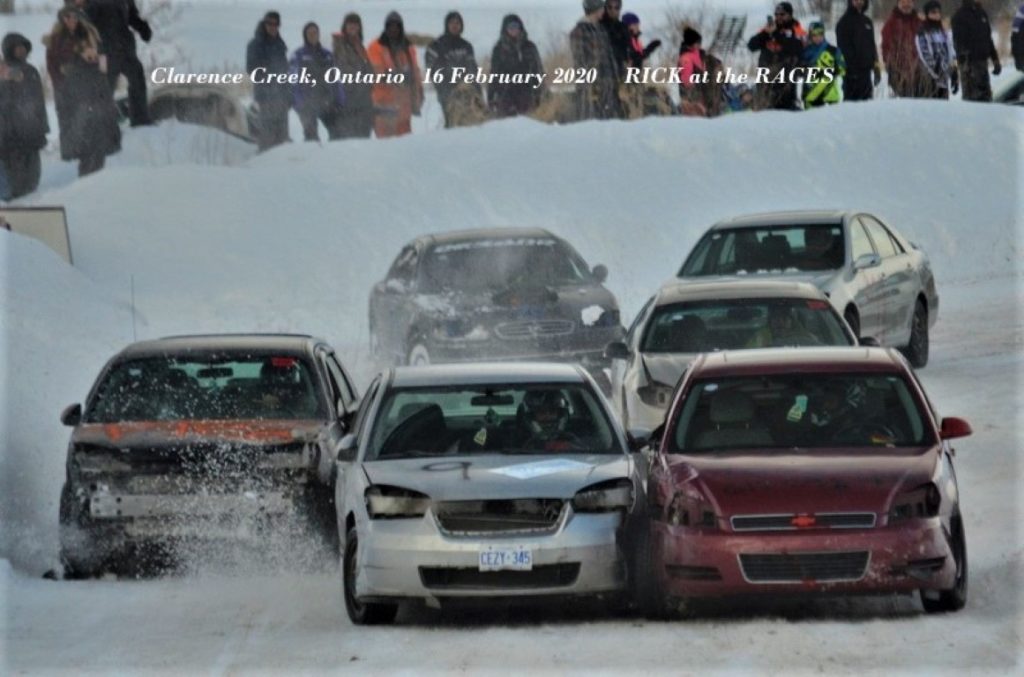 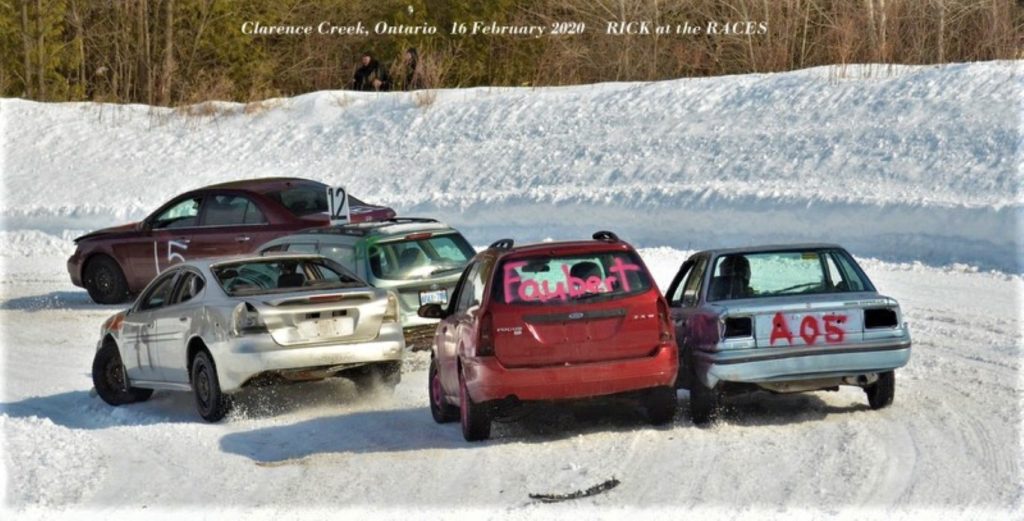 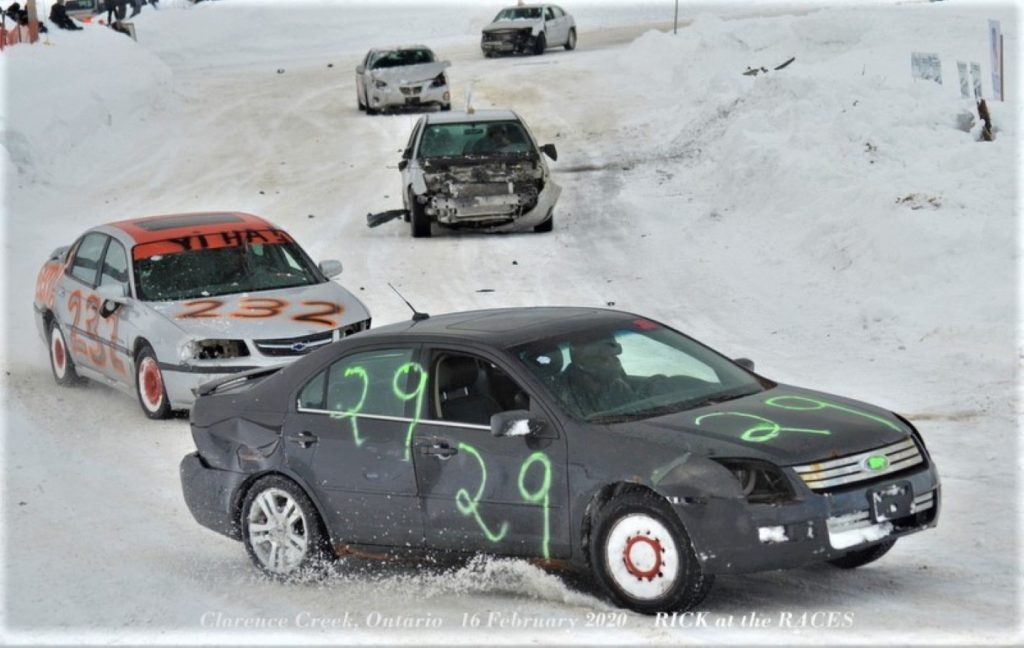 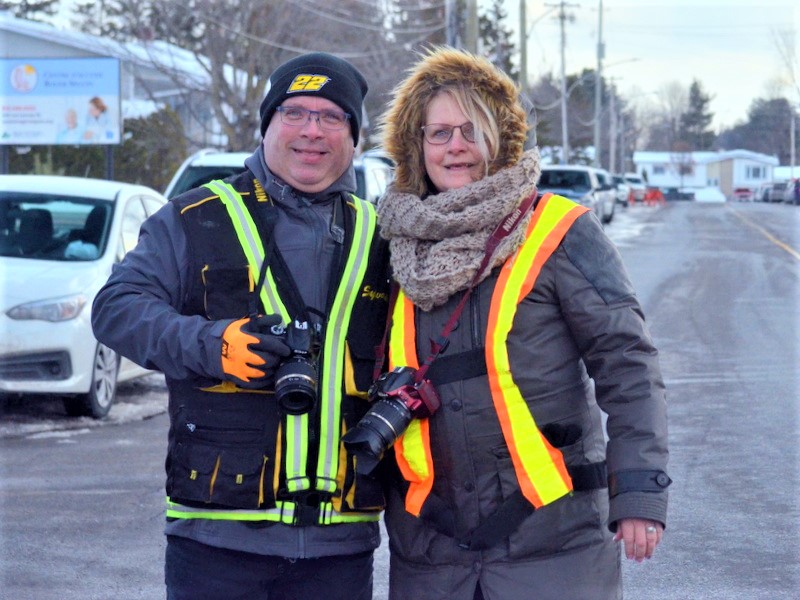 Fellow Cornwall Motor Speedway photographer Sylvain Lauwers was there too with his wife Lise.

I took off half way through the show to get home in good time to watch the Daytona 500 on TV.  Although I don’t have much interest in the NASCAR Cup Races these days , I still try to see the season opener from Daytona.

Well, they never got it in on Sunday . After a number of stoppages for rain, NASCAR eventually decided to postpone the race until 4-00 pm the next day.

So, on Monday night I sat at home and watched the continuation. Like most NASCAR Cup races these days, it was pretty uneventful, so I didn’t pay much attention until the final laps.

That’s usually when the action starts as the drivers get fed up with being in a  ‘procession’  and try for the win.  Unfortunately this caused plenty of cautions for wrecks right up until the final lap.

It was on the last lap when  the worst one occurred. Ryan Newman was hit from behind,  went into the wall and then bounced back into the oncoming cars. He was hit in the roof by another car then skidded on his roof for quite a distance before coming to a halt . It looked very nasty and Newman was rushed to hospital, where he was thankfully OK and discharged a couple of days later.

The race was won by Denny Hamlin.

February was also a milestone month in my life . It was my Birthday on the 1st February  and after 47 years of earning a living as a truck driver I advised Walmart Fleet, my present employer of my wish to retire. 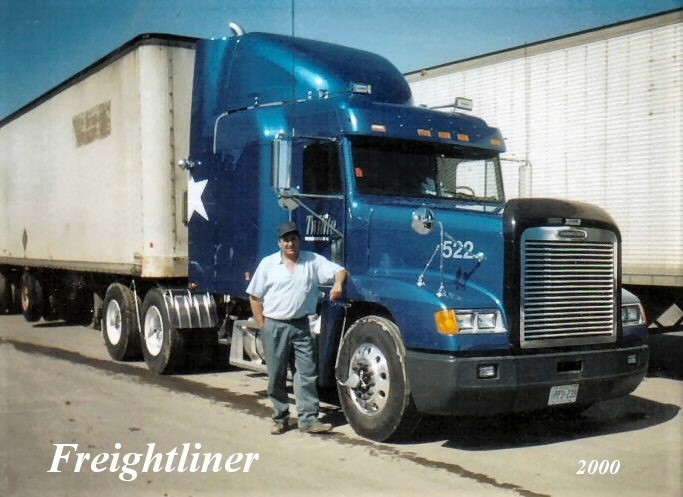 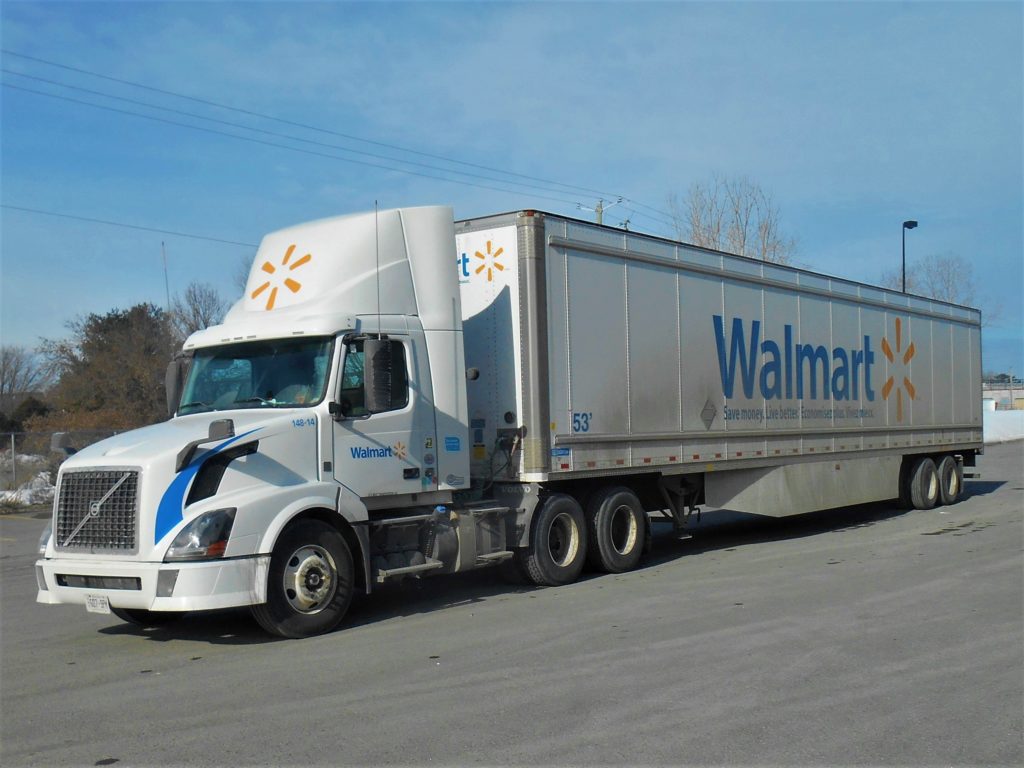 The Myasthenia Gravis I have been suffering from for the past few years, has kept me off work. I ‘d always hoped  I would get back , but it never happened. After my relapse last year I weighed up the situation and decided to call it a day on my 66th Birthday.