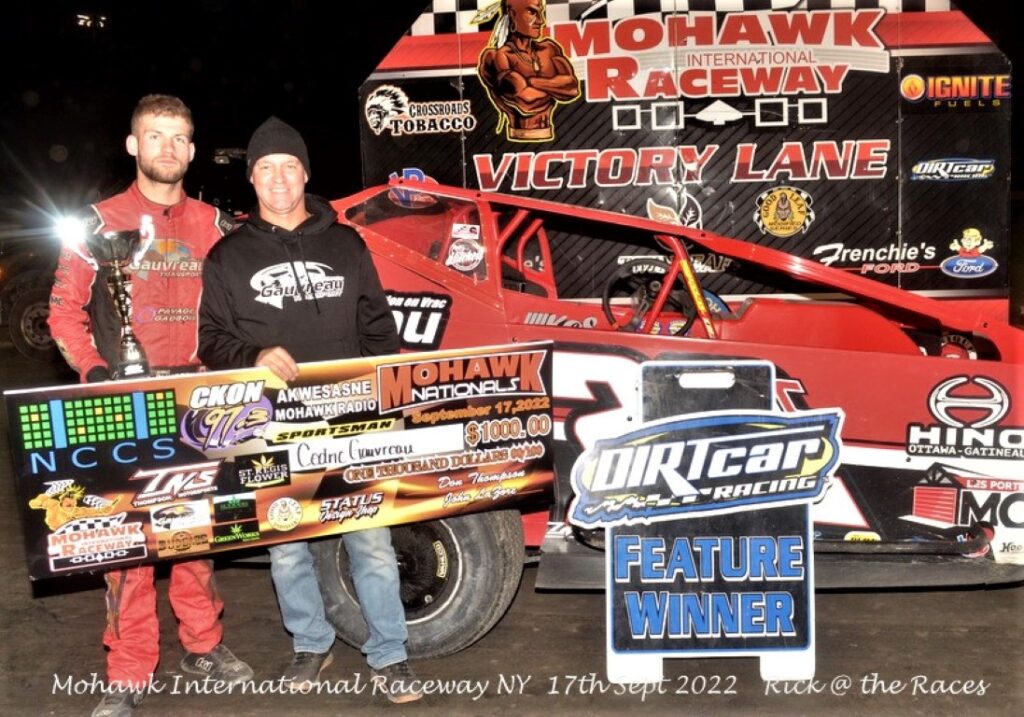 After returning from my busy UK trip last Monday (the 13th Sept) , it’s been a week of relaxation , and recharging my energy.

My long time friend Lynn Longden flew back from the UK with me for a three week Canadian vacation. We’ve known each other since we were teen agers and have kept in touch for over 50 years. 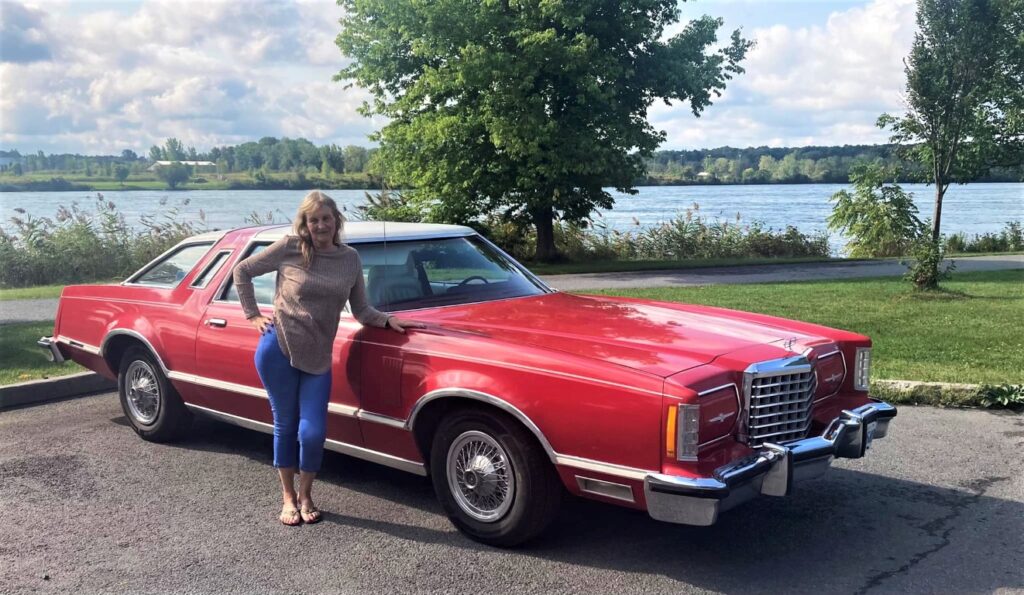 During the week we went for a few drives in my 78 T.Bird before the weekend of racing was upon me.

The overseas trip meant that my monthly I.V.I.G infusions at the Cornwall Hospital had to be put back a few days, so Friday nights races were out of the question for me. 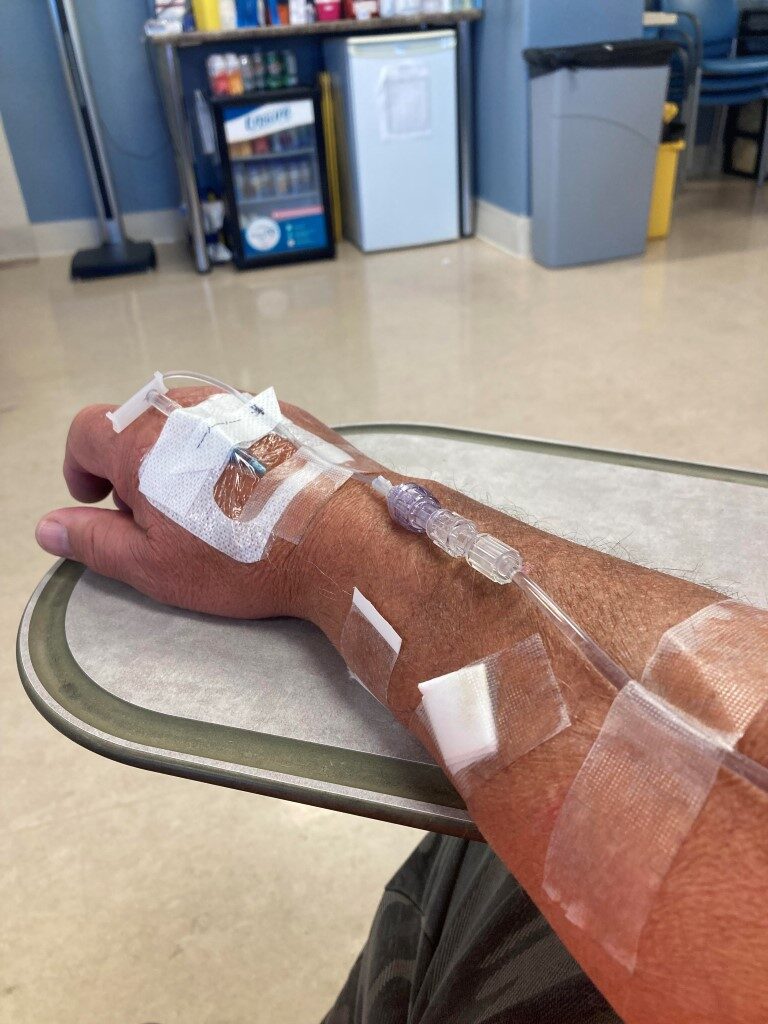 I still had my I.V  tubes connected to my hand in readiness for the second day of treatment on Saturday morning.

I was all done by lunch time and was all set for some racing in the evening.

It was the annual Mohawk Nationals Weekend at the Mohawk International Raceway, just over the bridge in Hogansburg NY.

Saturday was day two . Friday night had been for the DIRTcar Series for 358 Modifieds and on Saturday they were hosting the DIRTcar series for Sportsman and Pro Stocks. Chris Raabe won the 358 race that I’d missed.

I was over the bridge  into the USA early , to do a bit of shopping before the races, and was at the track by about 5-00 pm.

There was a good turn out of cars for both the DIRTcar Series races and the visiting Vintage Modifieds. The Rookie Sportsman were also on the program as well as the Mod Lites.

It was a chilly night so if things went on too late , I had decided in advance, that I’d leave before the end. Lucky for me I didn’t have to do this. The show moved along quite swiftly with no major delays.

I based myself in my usual spot on the inside of turn four. 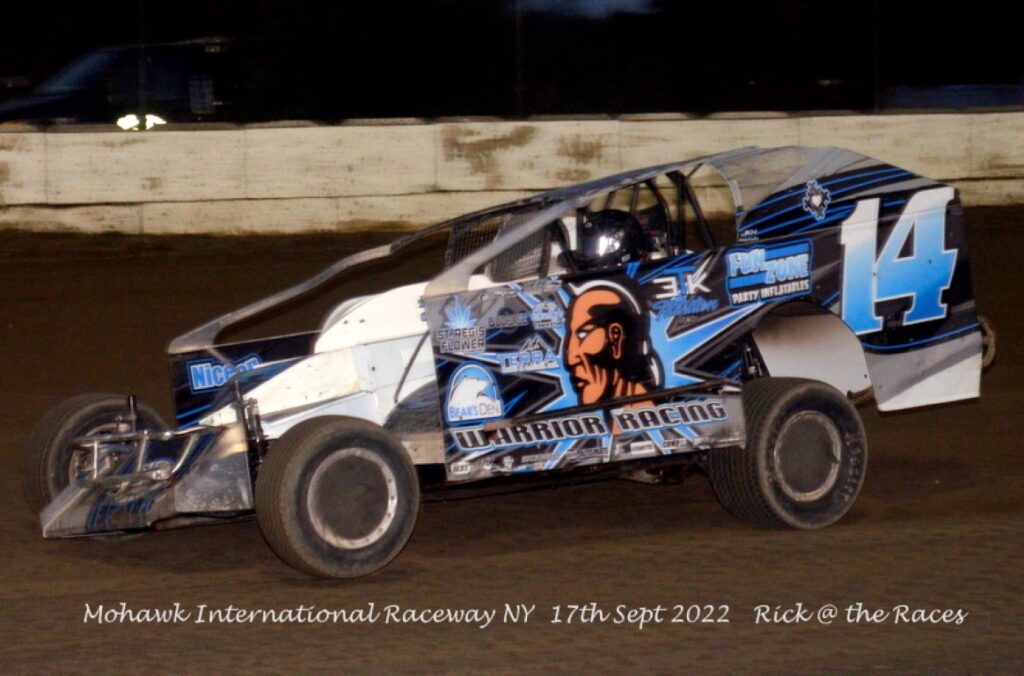 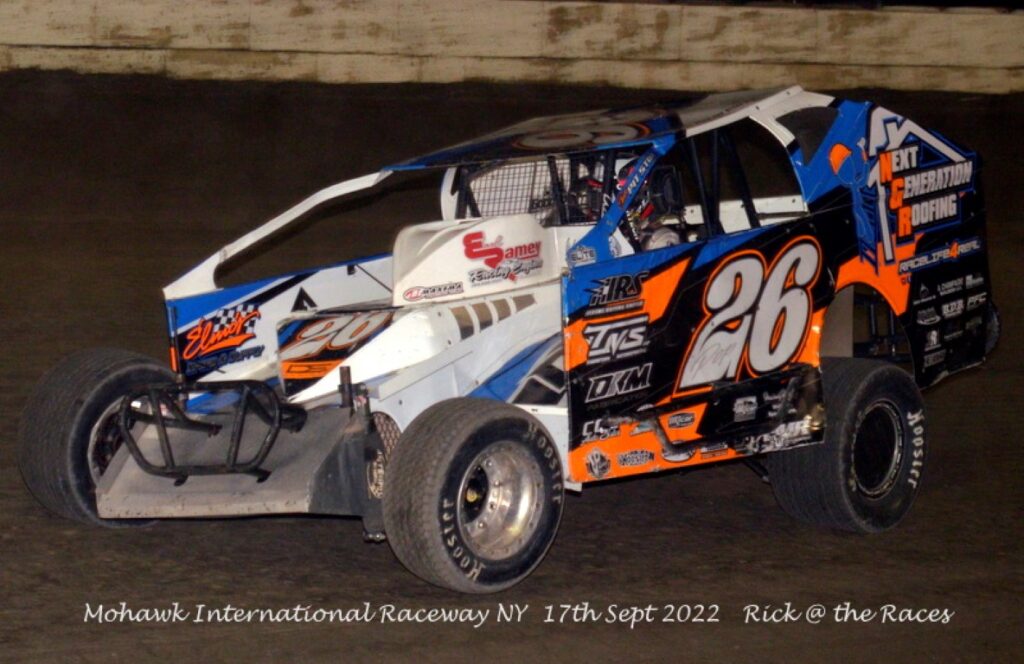 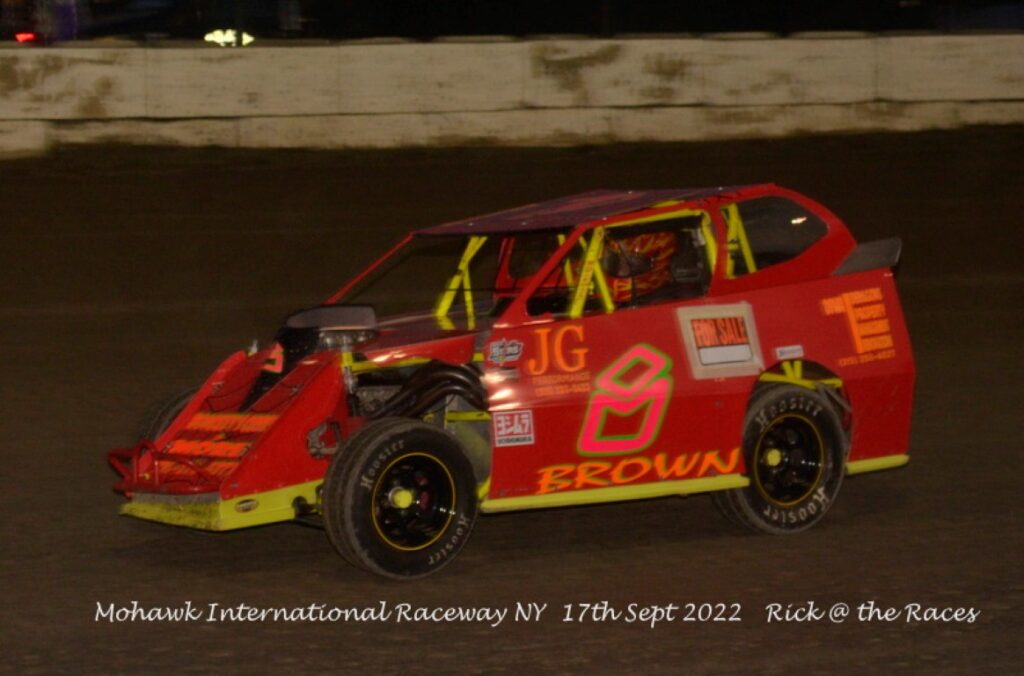 The first of the Features took place before intermission ,and was for the Rookie Sportsman. 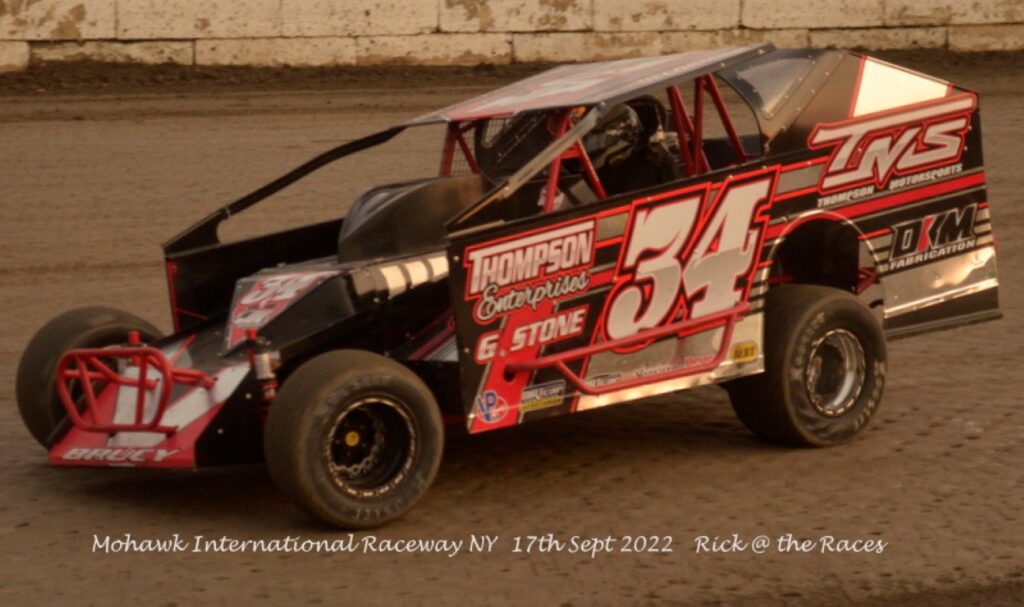 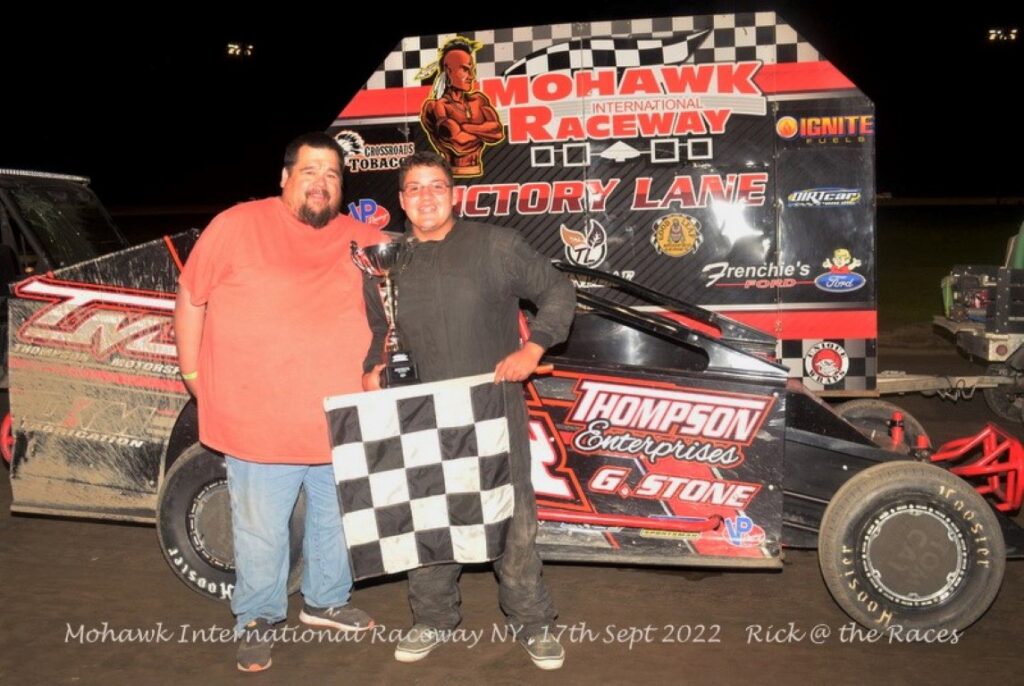 This was won by Xavier Delormier, the son of Dave Thompson, one of our local race team owners.

Next up was the Mod Lite feature. 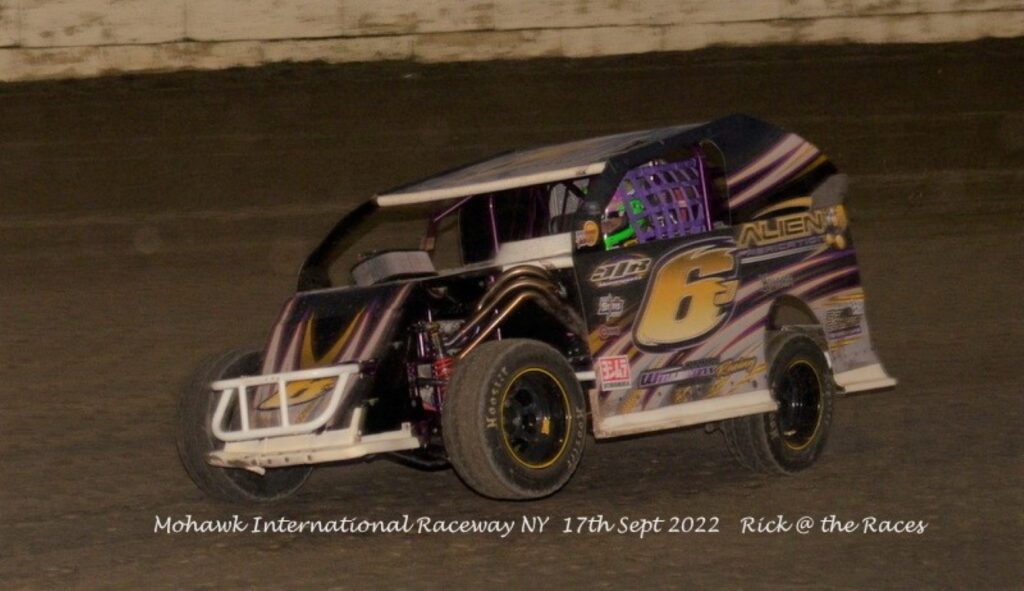 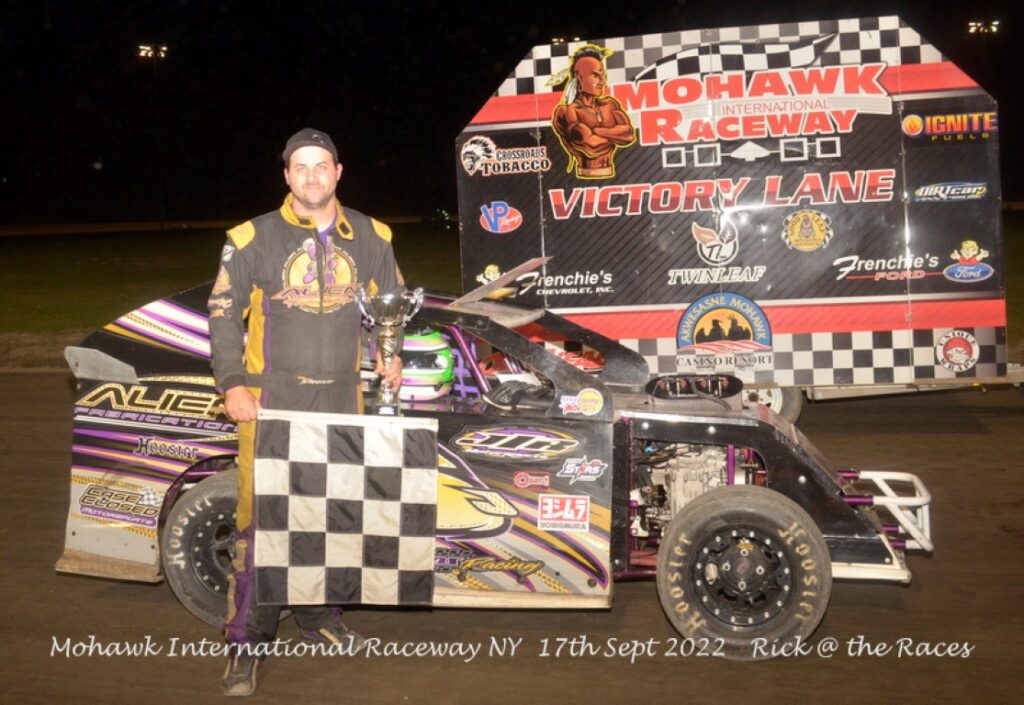 As usual there were very few cars in this division , and Joe Isabelle took the checkers. 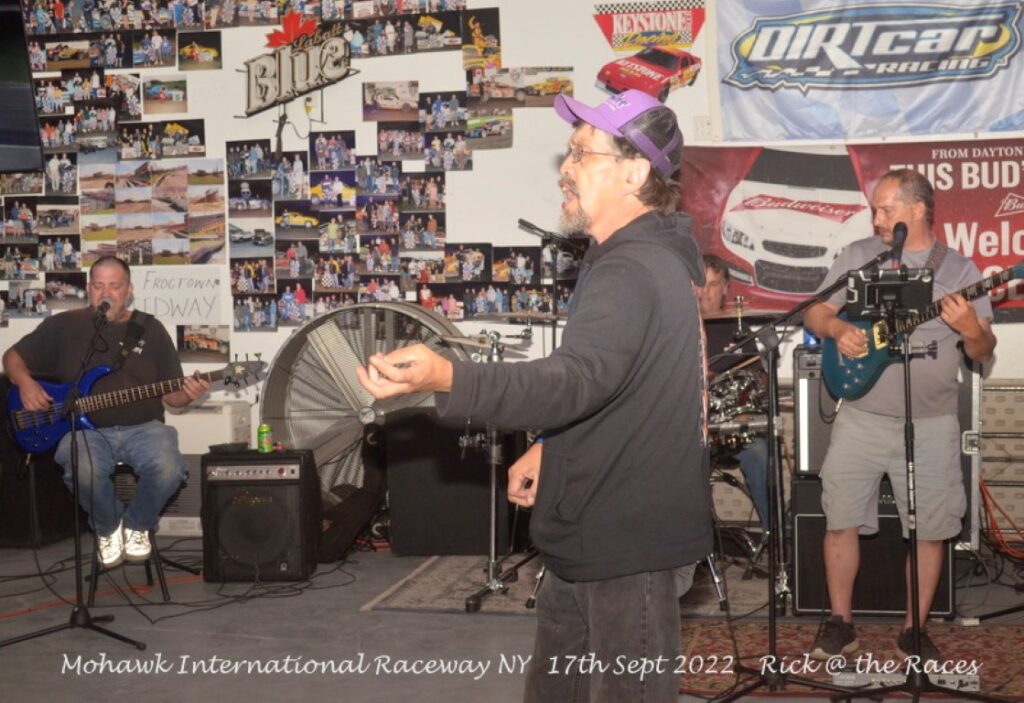 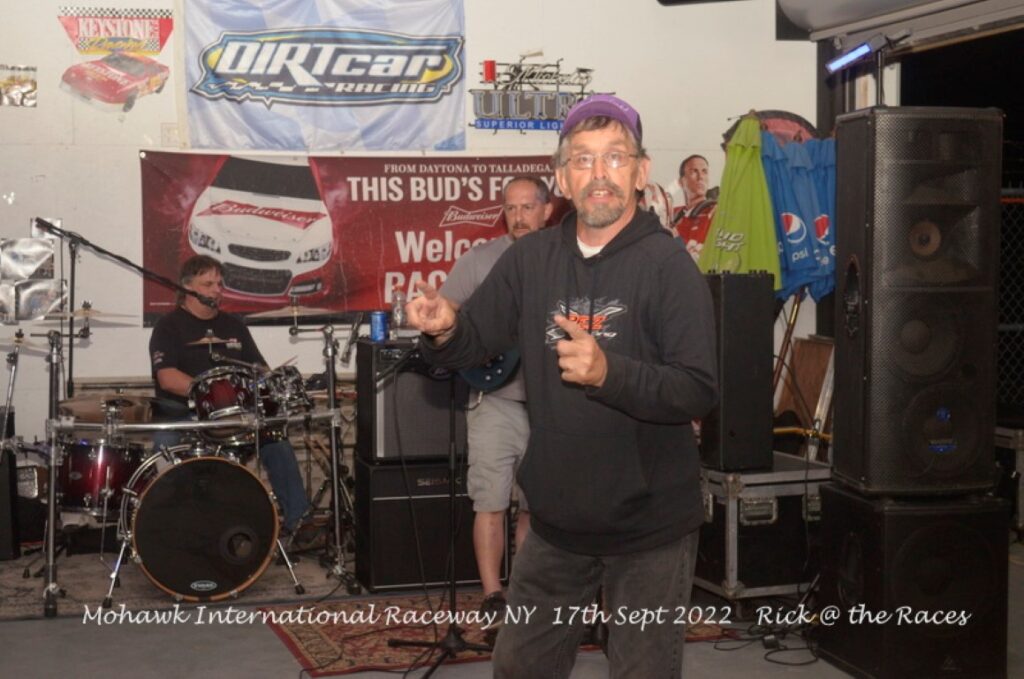 It was now time for the short intermission, where I found a good band playing in the bar, and ‘Crew Chief’ Chris Hearne enjoying the music.

After the break it was the 20 lap Vintage Modified feature, where Steve Billings got the win in the Dave Heaslip replica car. 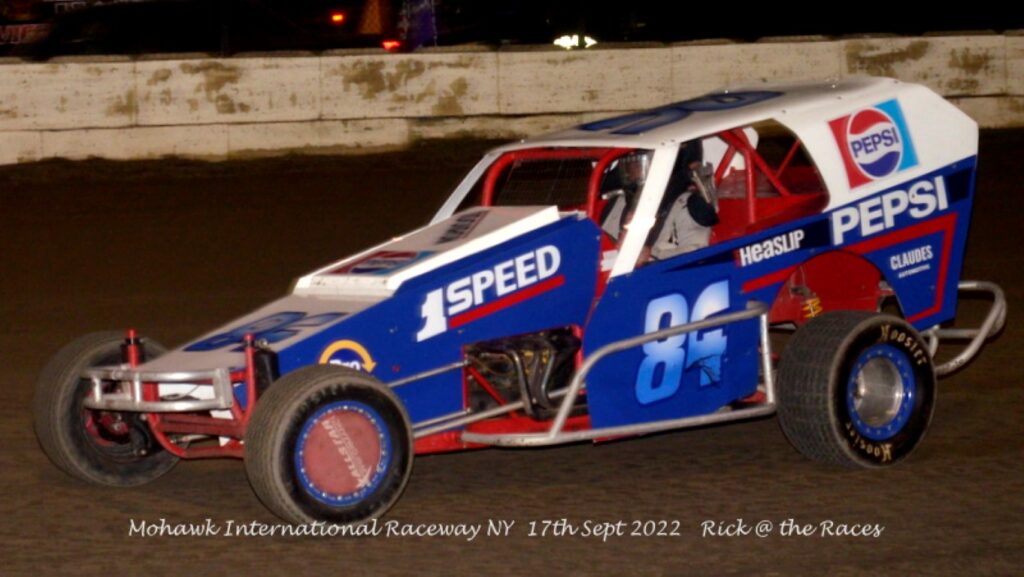 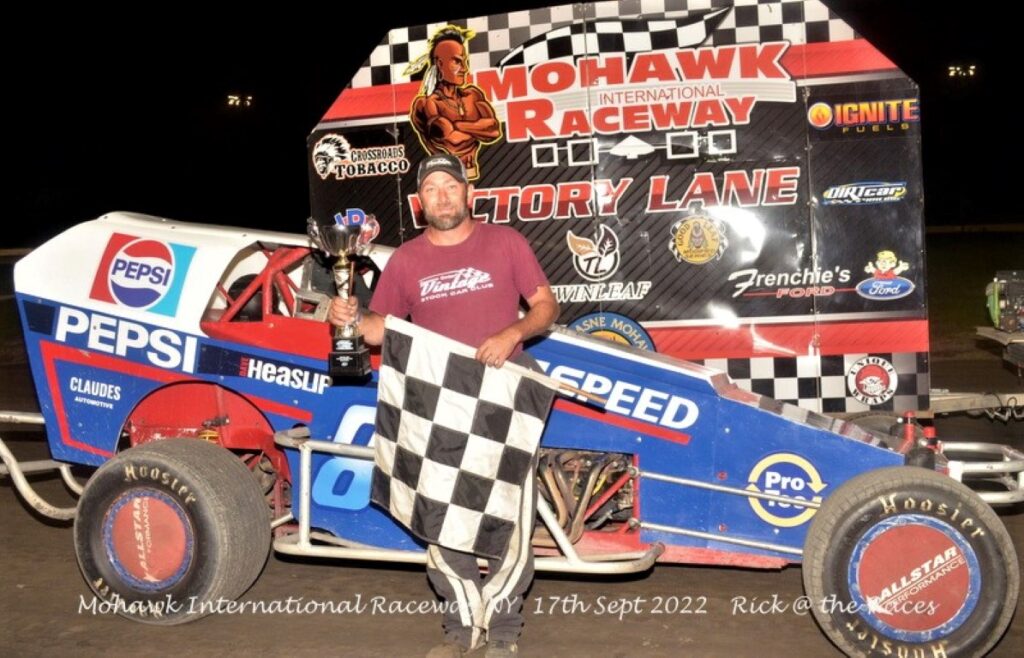 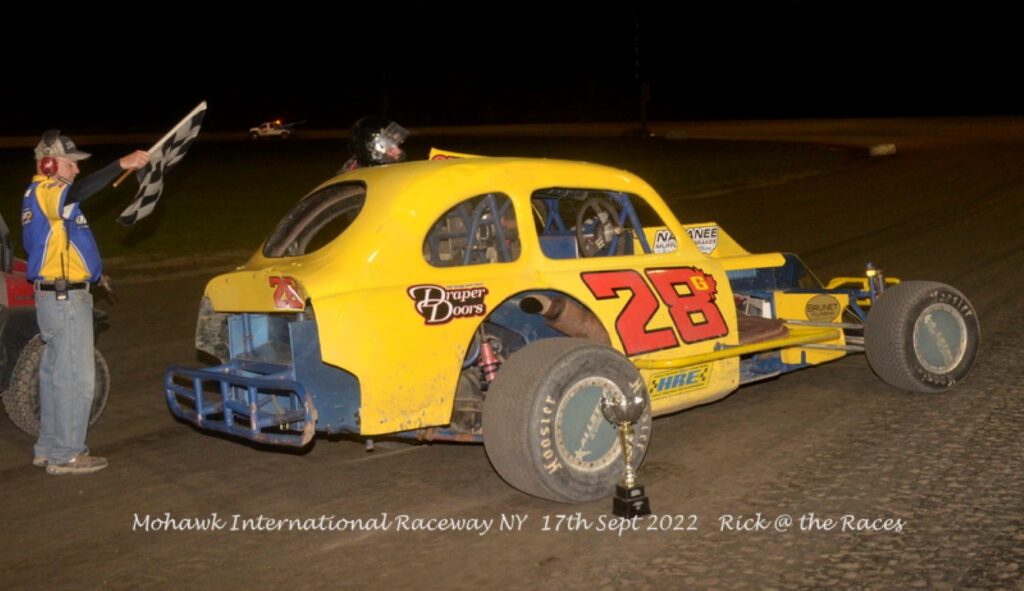 Greg Hale got the award for the older car class.

It was now time for the DIRTcar Series Races.

First was the 30 lapper for the Pro Stocks.

There was plenty of action in this one. 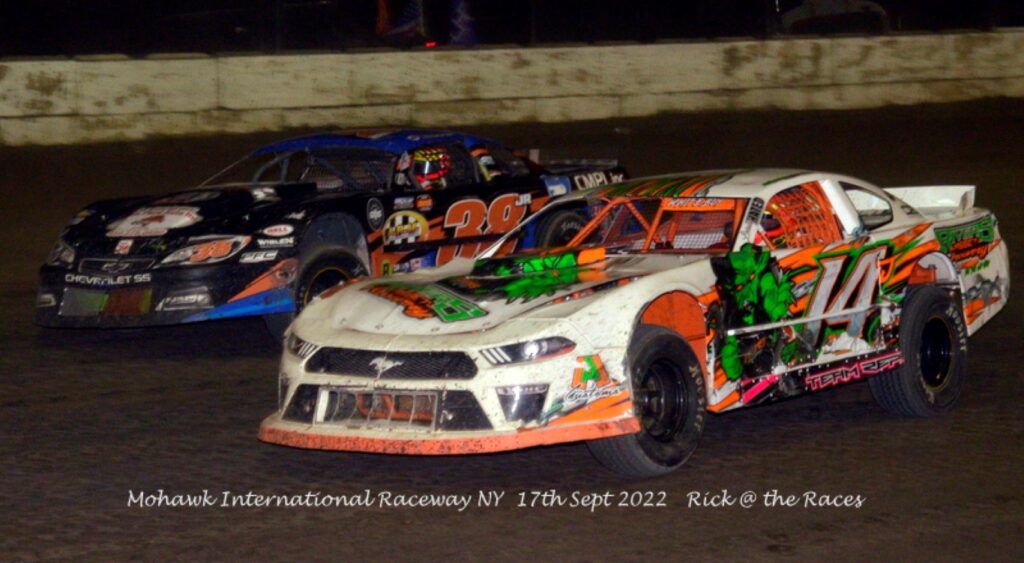 It turned out to be a good race where ‘invader’ Chad Jeseo from the Albany area, worked his way through the pack to take the win. 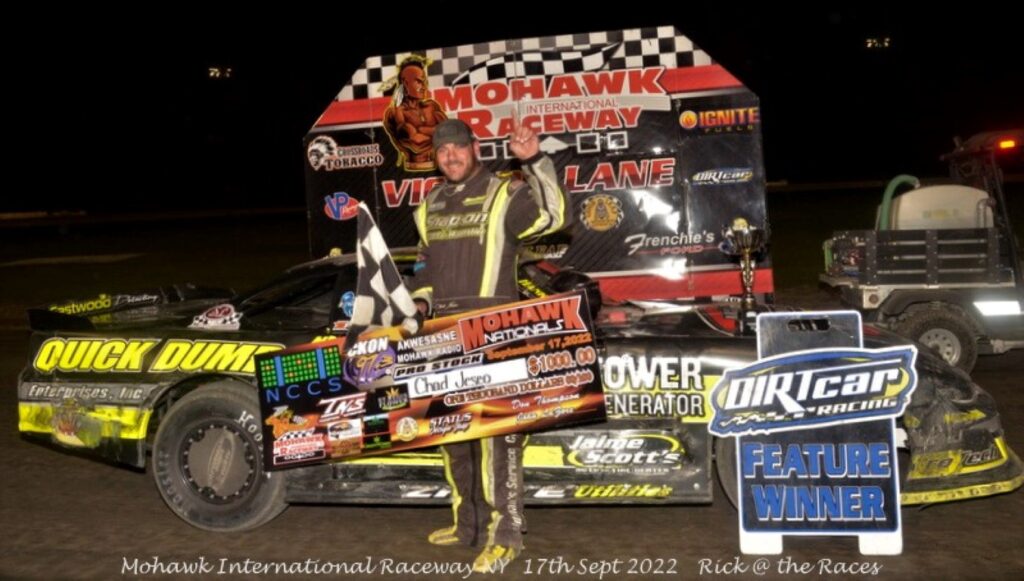 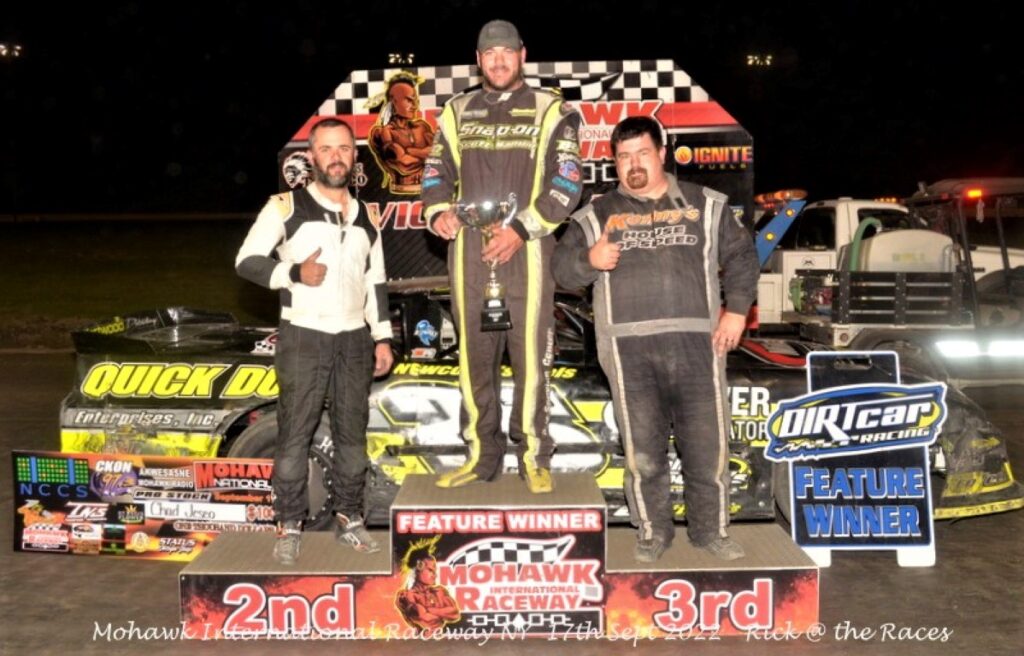 Following him across the line was points leader Bruno Richard and Eli Gilbert.

Final race of the night was for the Sportsman Series race. 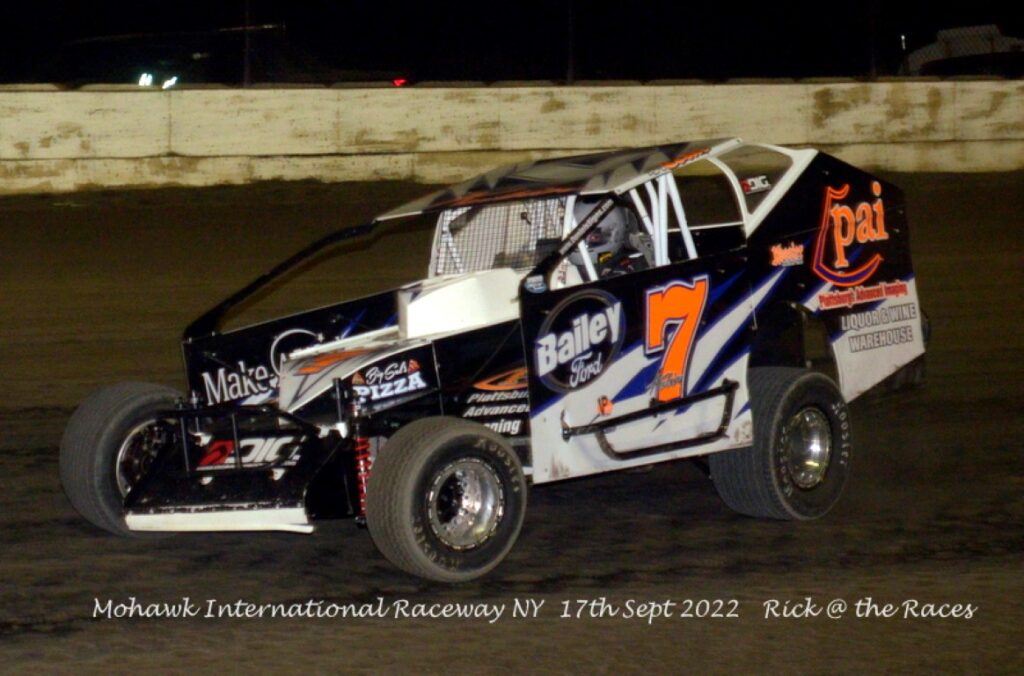 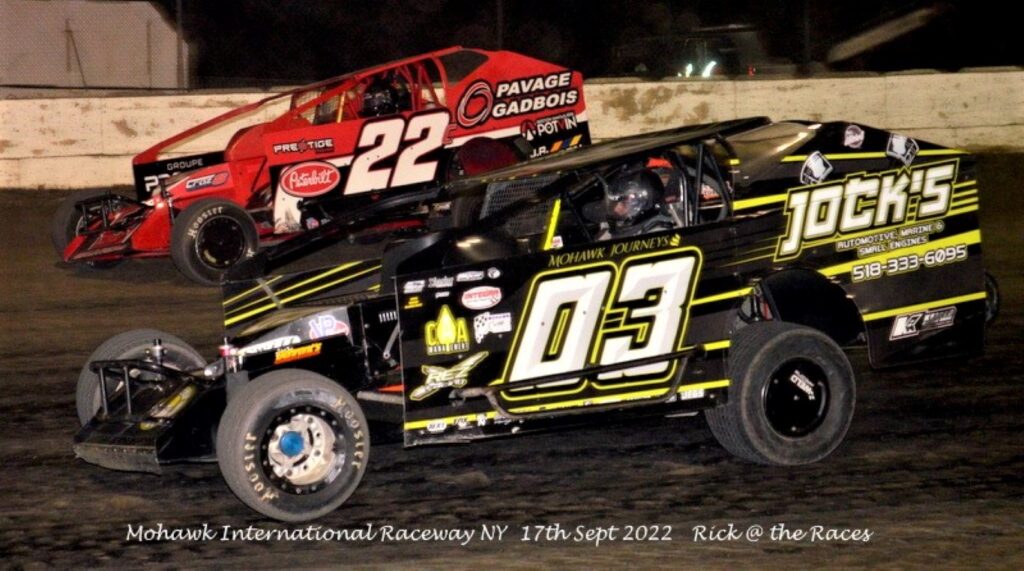 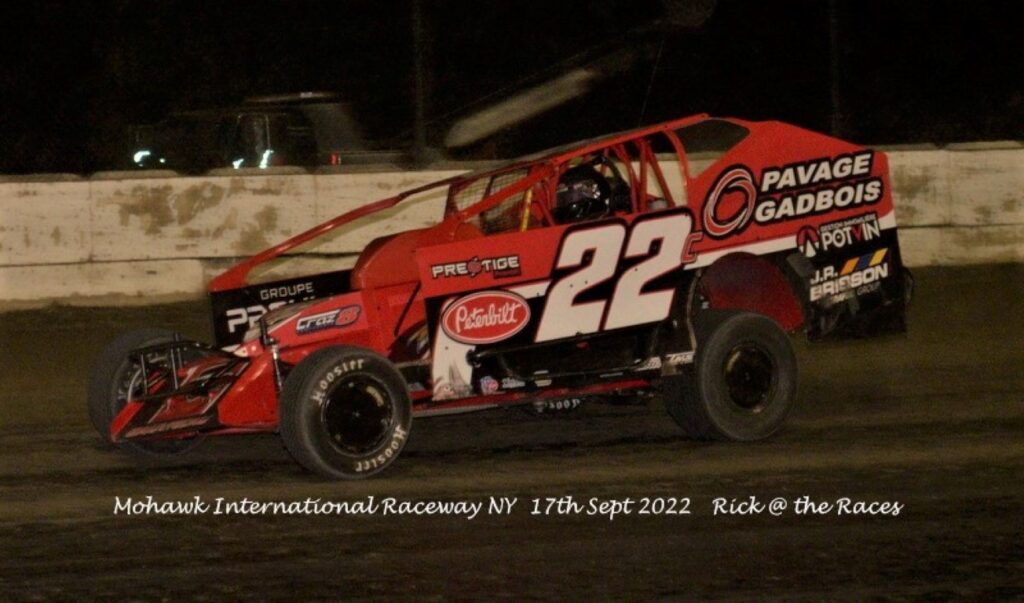 Cody Aubin was the early leader of this one , who was eventually overhauled by Cedric Gauvreau who went on to get the win. 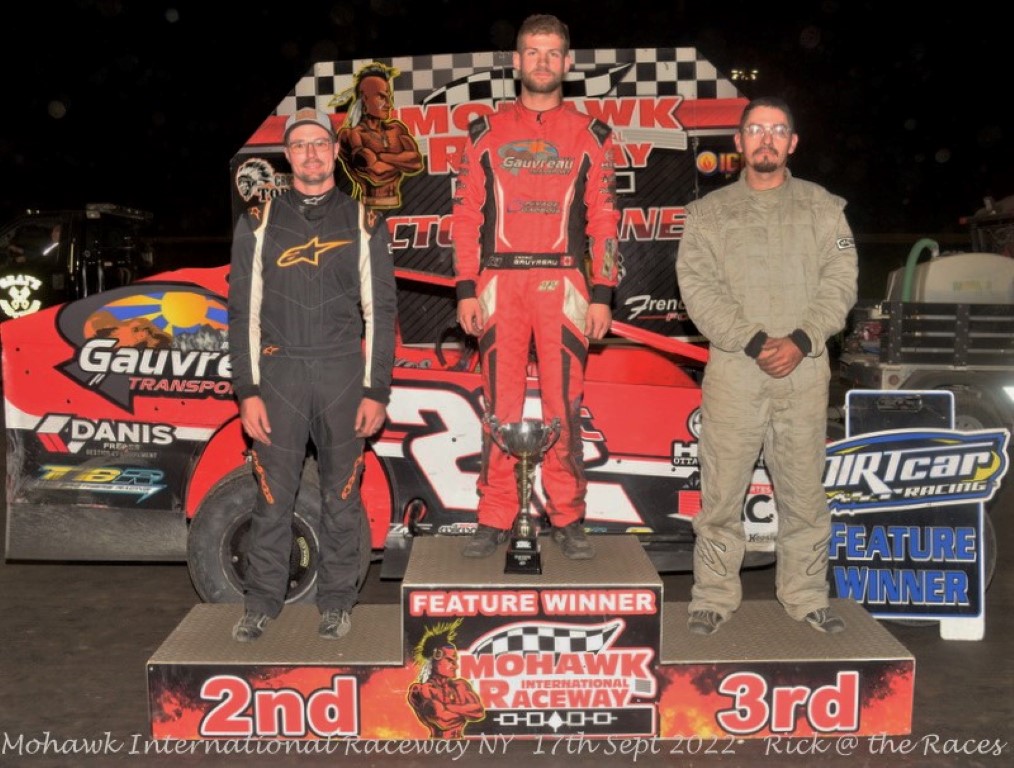 For Cedric this was the second big win of the weekend. He won the big Pete Mitchell Memorial race the night before.

Sunday morning I awoke to the sad news on social media  that, Alexis Charbonneau , one of our local Mini Stock drivers had passed away.

He was a great character and it was always a fun time for us photographers when he visited us in Victory Lane.

He will be sorely missed by all in  the racing community.

My thoughts and sympathy go out to all his family and friends. 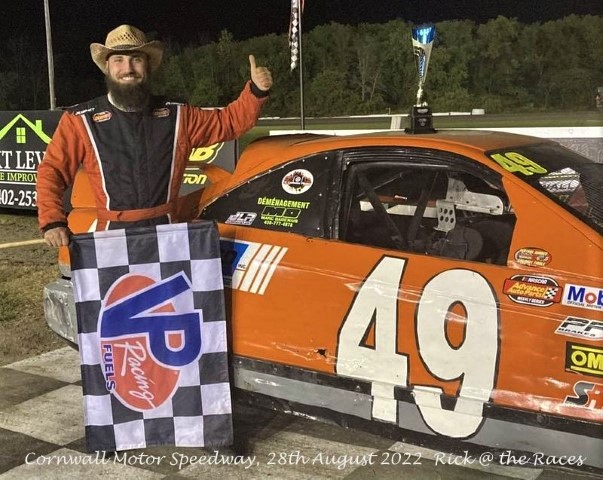 Monday the 19th of September was another sad day , as the world said goodbye to Queen Elizabeth II , She passed away , the previous week while I was in the UK , and the State Funeral was being televised live all over the globe. I was out of bed early to watch the coverage.