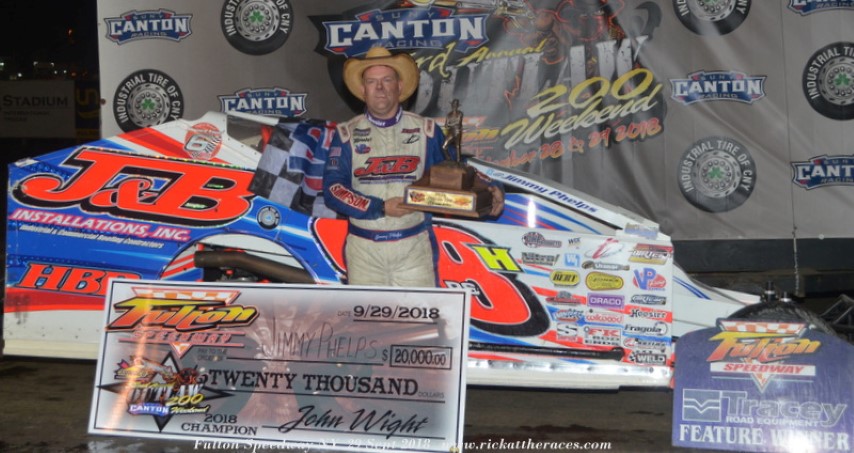 My  report begins on Tuesday 25 Sept, when it was officially announced,  who the new promoter at my local Airborne Park Speedway at Plattsburgh NY would be.

John Walker who’d been running the place for the past two years announced a few weeks ago, that he would be stepping down at the end of this season.

Everyone was speculating on the tracks future until this Tuesday when it became known that Robby Knowles the tracks media man would  be the new person taking over. 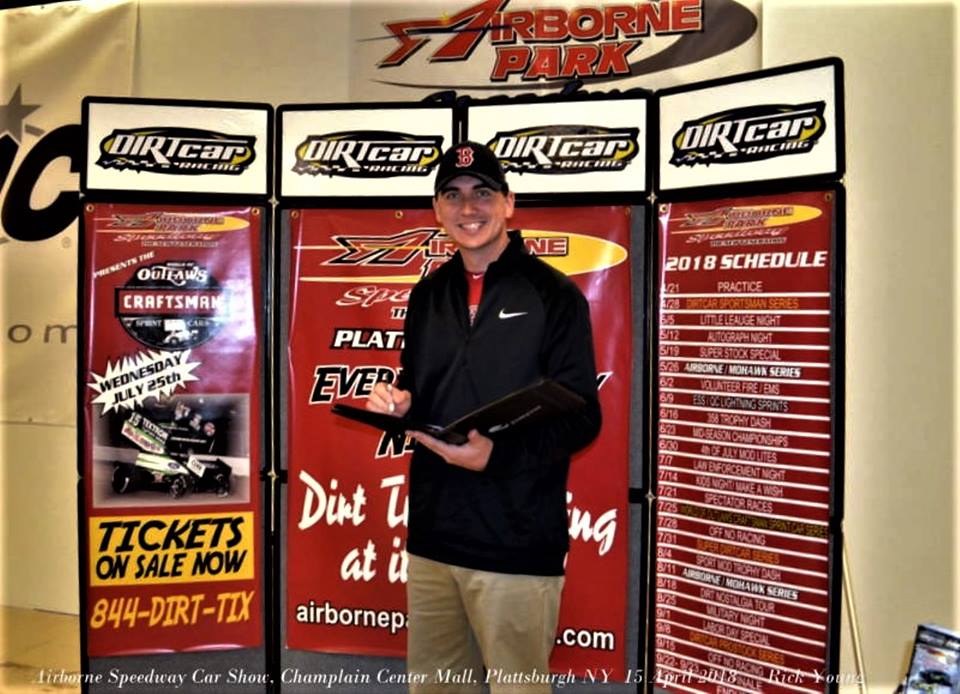 I’d been in ‘the loop’ about this, but was sworn to secrecy until it became common knowledge. Robbie should do OK , and make a great job of it. I wish him well.

It wouldn’t seem right if I didn’t start my report with some kind  of mention regarding my medical appointments that always manage to get added to my weekly routine . Sure enough, this week was no different. I guess it’s one of the joys of getting old.

Without dwelling on them too much, the first one was on Wednesday 26 Sept for a ‘follow up’ , from a minor surgery I had three weeks ago. I was pleased to hear positive results from the doctor, and can put that issue on the back burner. The second appointment on Thursday 27 Sept , was nothing more mundane than a trip to the dentist to have a tooth pulled.  This was in preparation for another appointment  on Friday morning concerning my plans to get a ‘partial’ fitted.

Originally I’d planned to go down to the Fulton Speedway NY on Friday for their annual two day Outlaw 200 Weekend, but because of the appointment, I decided to go down  for the Saturday only.

The big races were on Saturday and the fact that I didn’t mind missing the Late Models and Mod-Lites that were added to the nights program, made my new plan make sense.

In my absence, 96 Sportsman cars turned up for their qualifying races. As you can imagine,  a long night looked imminent . 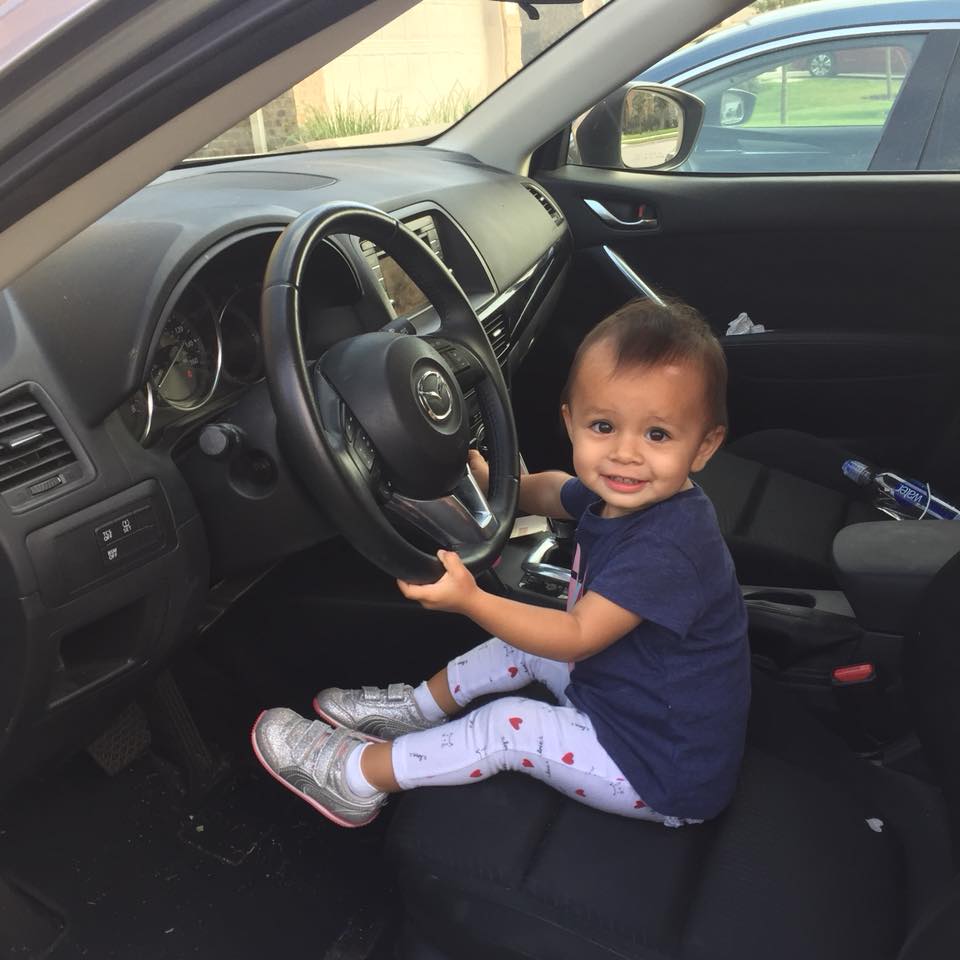 It looks like she can’t wait to get behind the wheel too.

On Saturday morning , at about 8-30 am , I set off from my place in Cornwall, Ontario in the Impala.

After crossing in to NY at my local border point and making a few coffee stops along the way , I was at the Fulton Speedway , by 1-00 pm.

The Fulton Speedway has traditionally put on a big 200 Lap show the weekend before Super Dirt Week for many years. It used to be known as the Victoria 200, until the rights of that race moved to another track.

Since then John Wight and his team have built up the ‘Big One’ before the ‘Big One’ into something really special, with the title of ‘OUTLAW 200’ .

It’s always been popular with fans and drivers alike, and this year was no exception. When I arrived, the parking lot and camping area was packed full and overflow spaces down the road had been been brought into use. It was still over two hours before start time, and I was lucky to find a spot to squeeze in the Impala .

Once inside, it was great to relax in my lawn chair out on the center, chatting with all my CNY ‘Tog’ buddies. 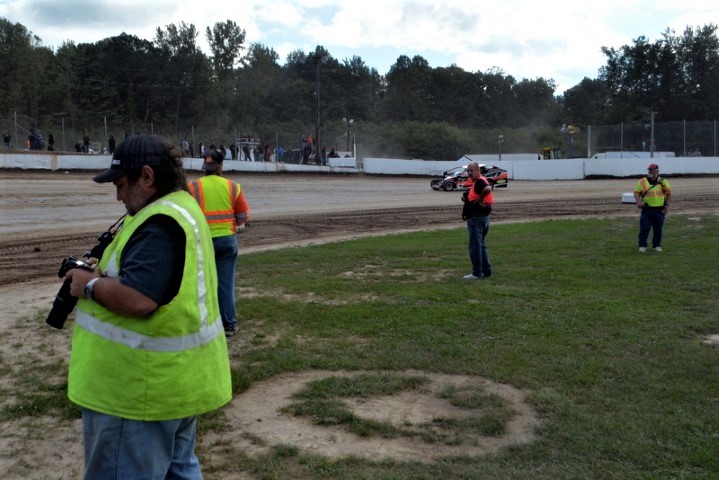 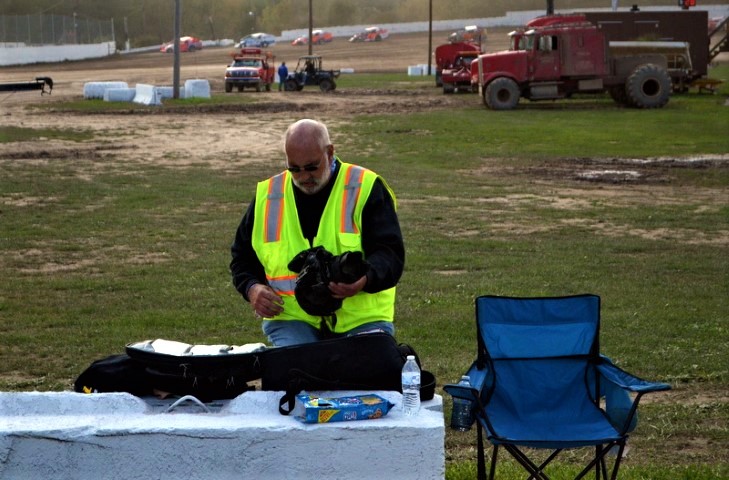 Before we could get down to the serious stuff of Sundays show, there were still some Sportsman Consis ( or B mains as the modern folk tend  to call them today)  that had n’t managed to get in the books from the previous night. 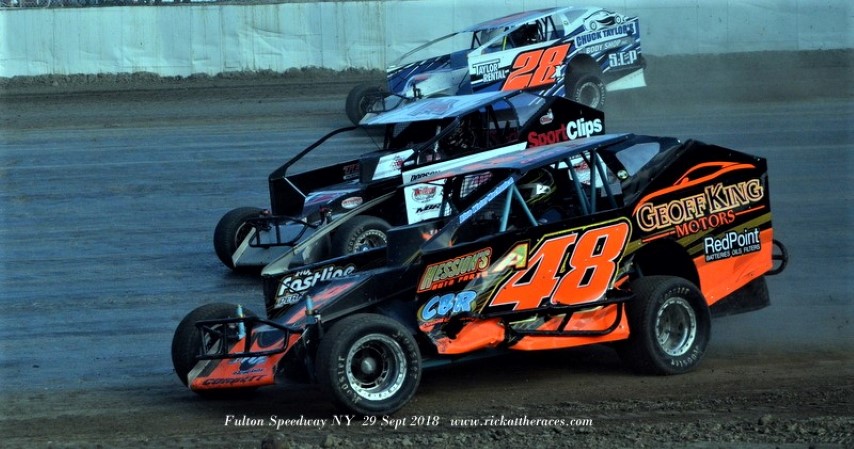 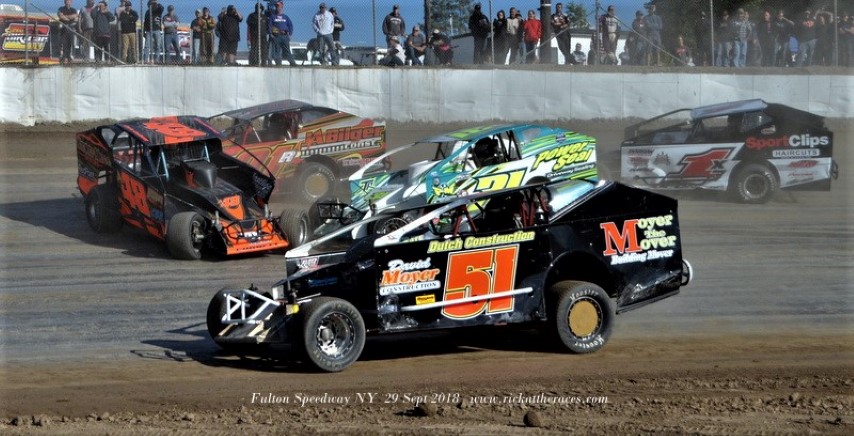 Things got underway soon after 3-00 pm , with the  Modifieds also having their heats to run . 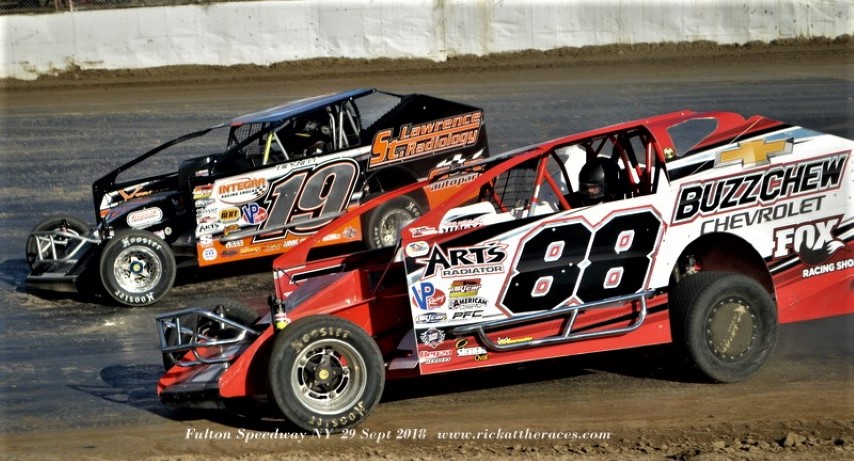 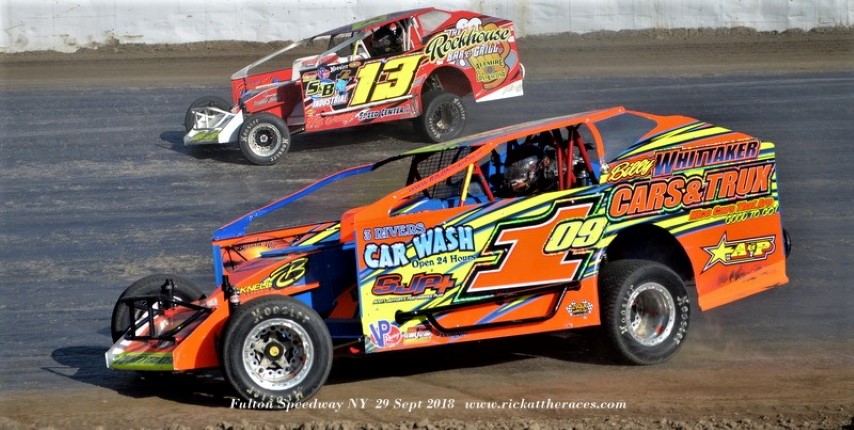 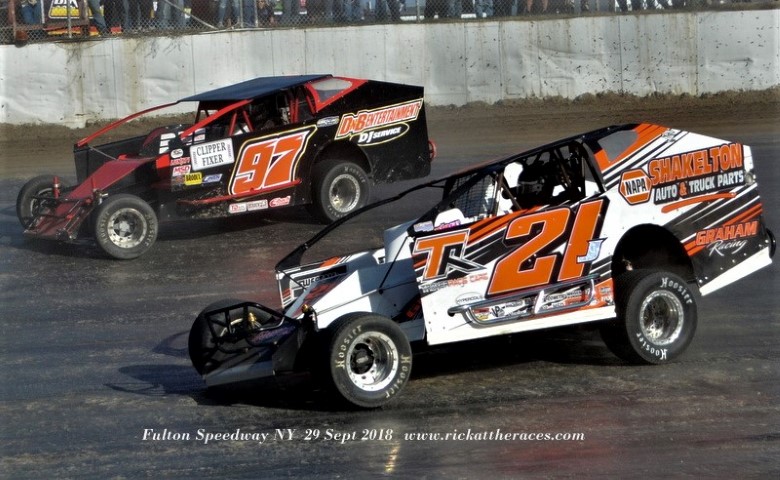 The unfortunate Billy Decker went for a roll over , right in front of me. 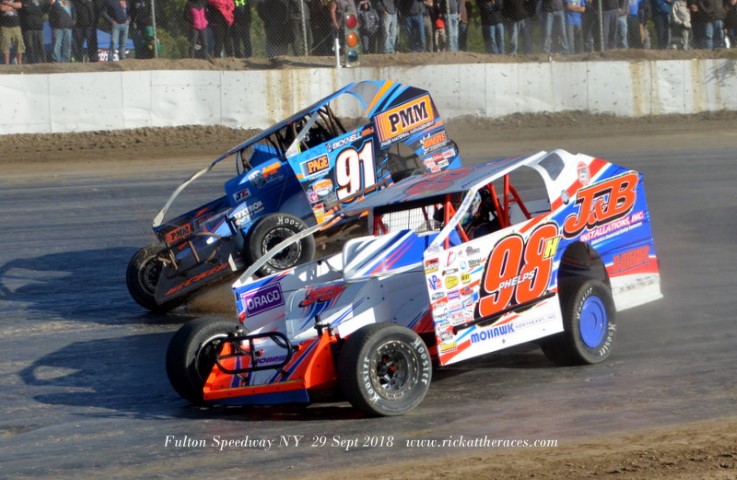 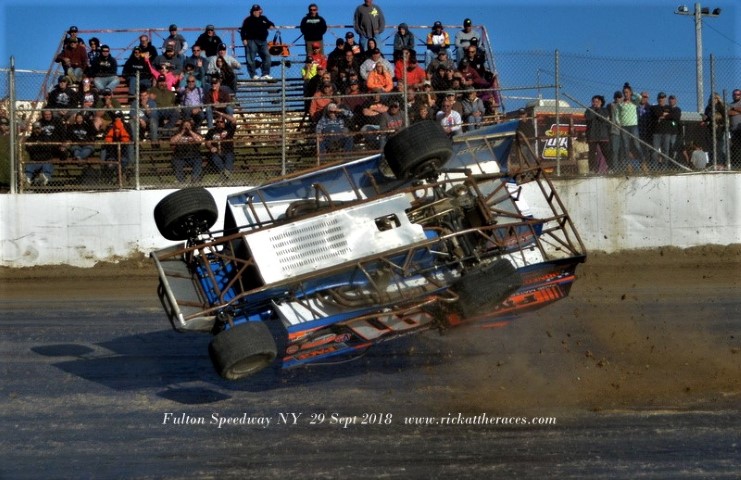 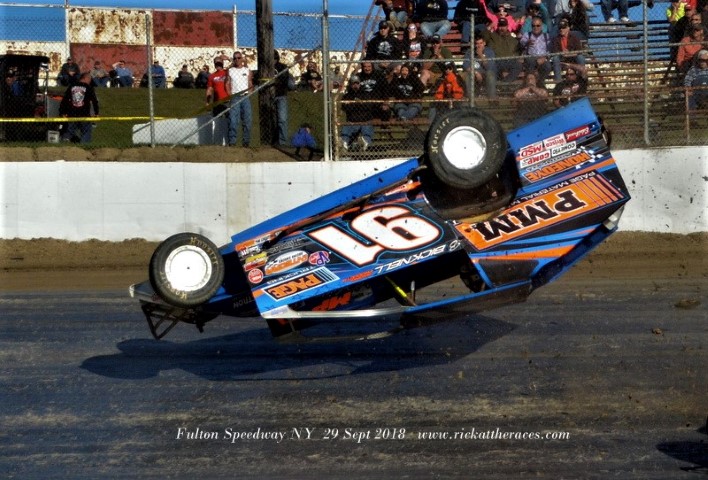 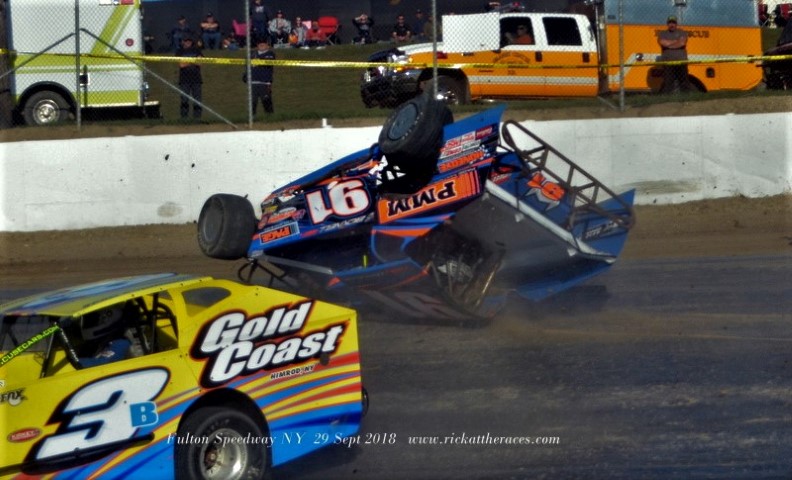 It was his second time on the roof in two weeks. He’d done it at the Fonda Speedway the previous week. Glad to see him walk away OK.

As scheduled , the opening ceremonies and the big races got under way at around 8-00 pm.

First up was the 50 lapper for the Sportsman. 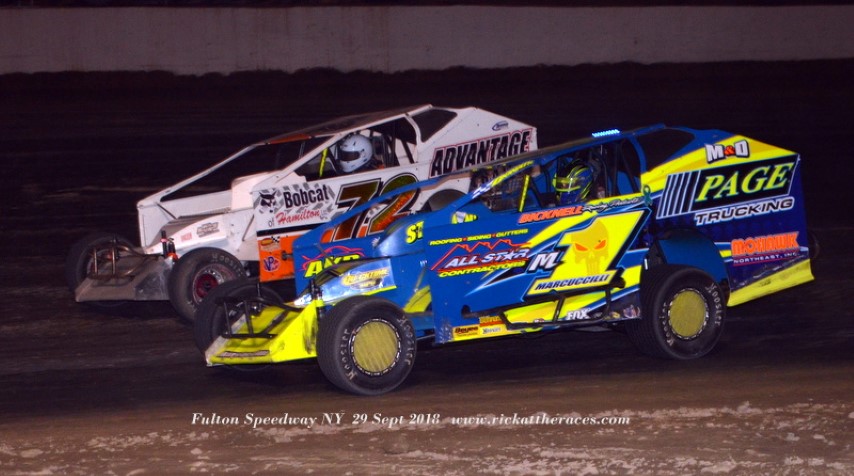 Once the race settled down , the top guys were at the front where you’d expect them . Brad Rouse, Dave Marcuccillo, Shane Pecore and James Friesen all looked like contenders, and when the checkers fell it was Canadian, Brad Rouse there to take the win. 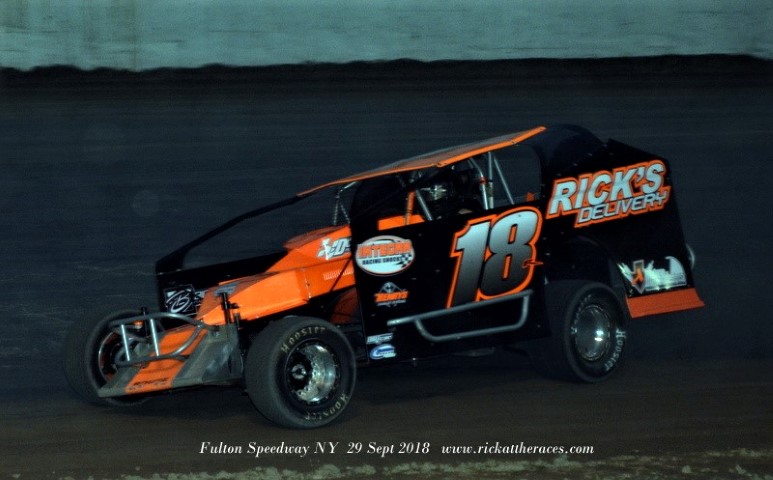 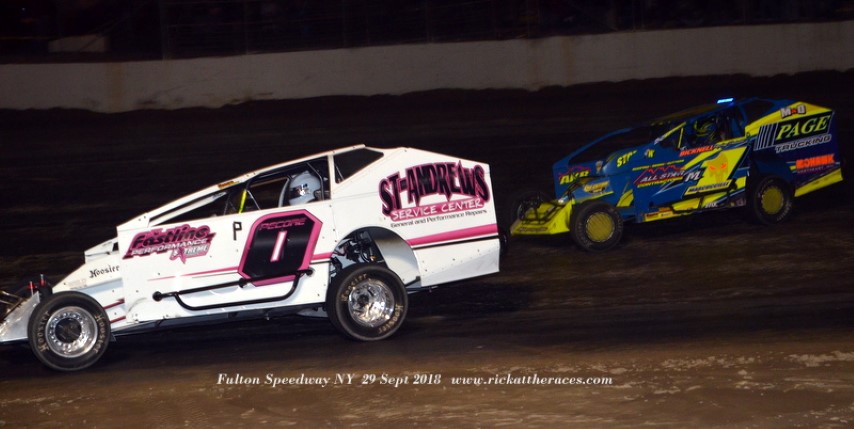 Marcuccillo passed Pecore, the long time chaser of Rouse ,  in the final stages to grab the runner up spot. 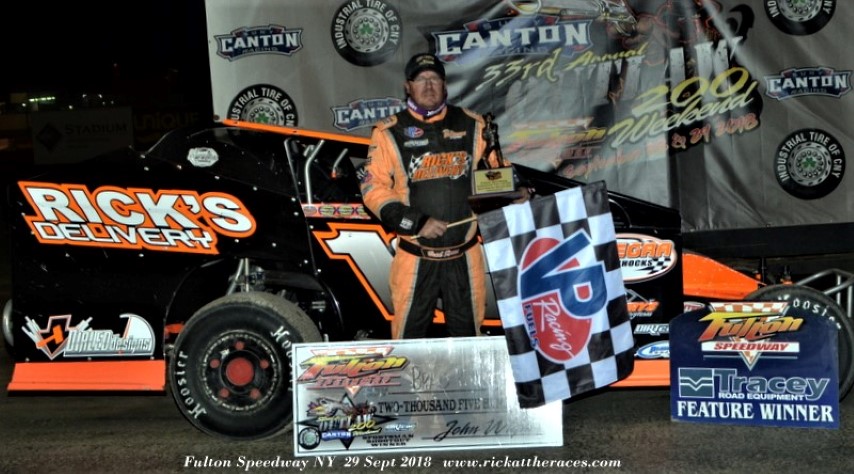 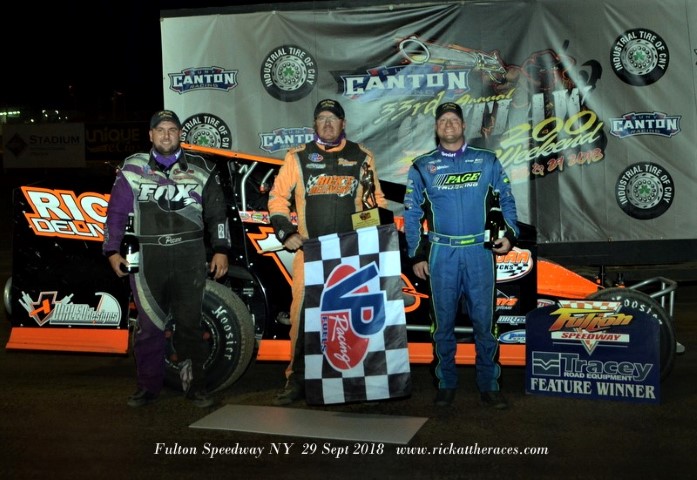 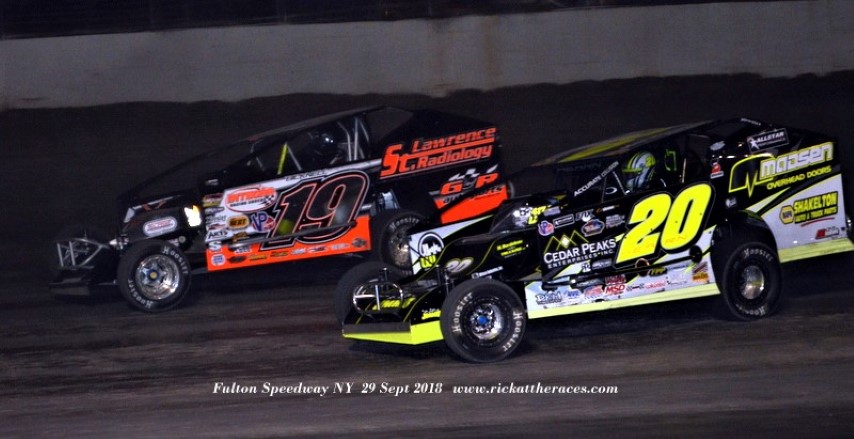 The first 100 laps before the mandatory half way pit stop, was pretty boring , with a follow the leader type race and only a bottom groove that seemed usable.

When the 100 lap caution came out and the cars returned to the pits, it was Danny Johnson at the front.

While the caution took place a lot of track prep got under way and by the time ‘part two’ took place, we had a whole new race track. There were all kinds of passing lanes available and we saw some great racing on the top and the bottom. 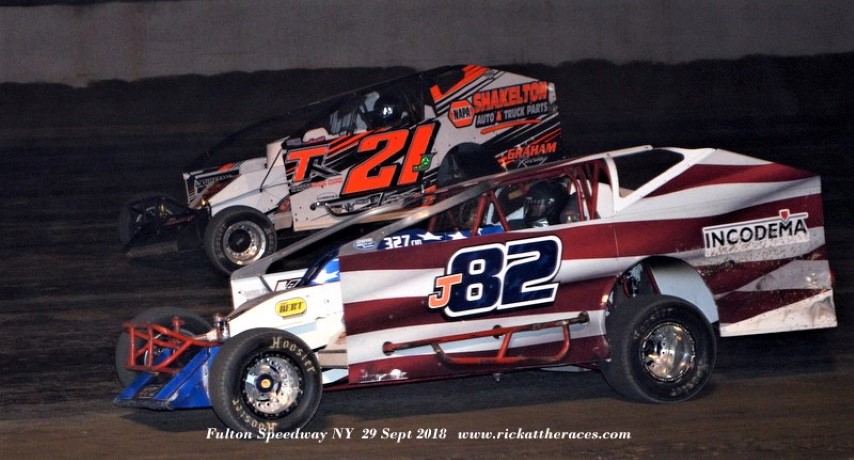 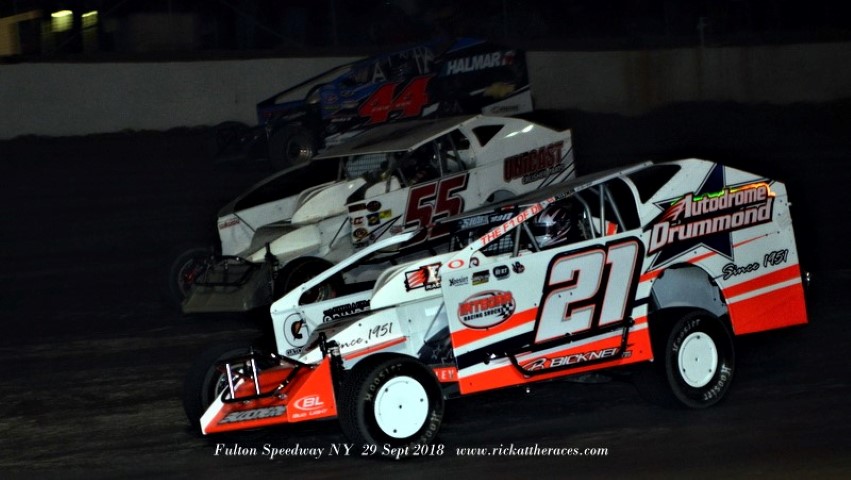 It was worth the extended break for the improvement it made. 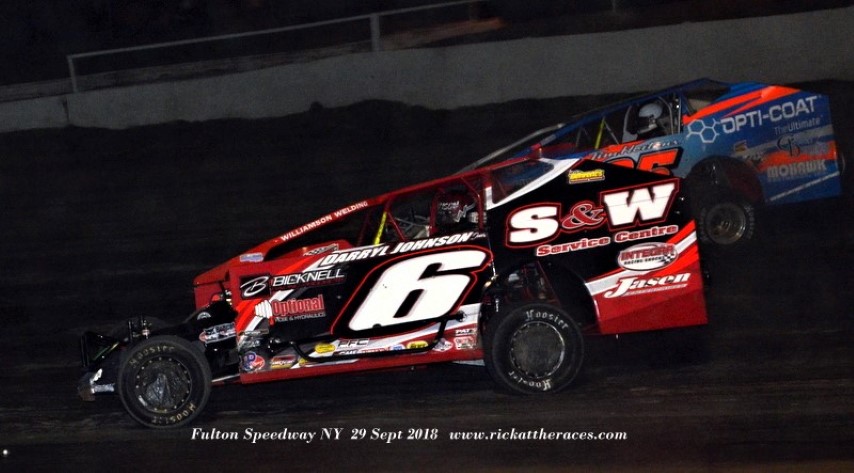 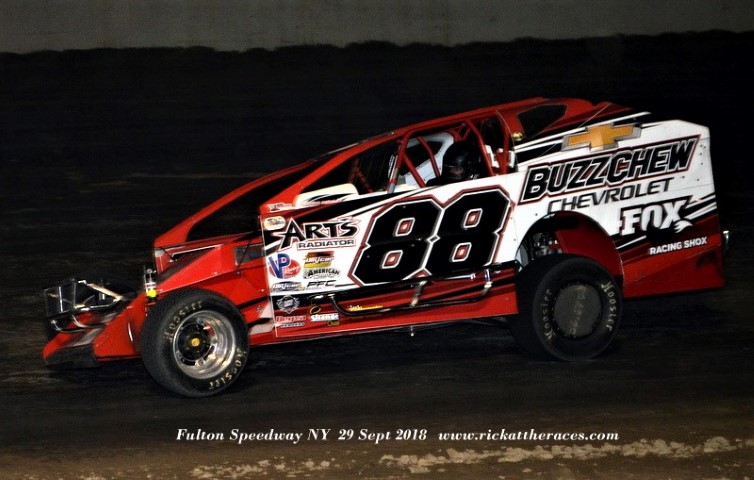 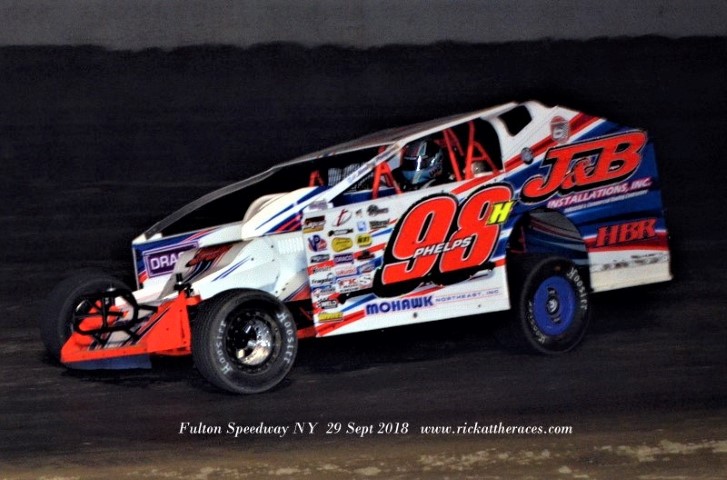 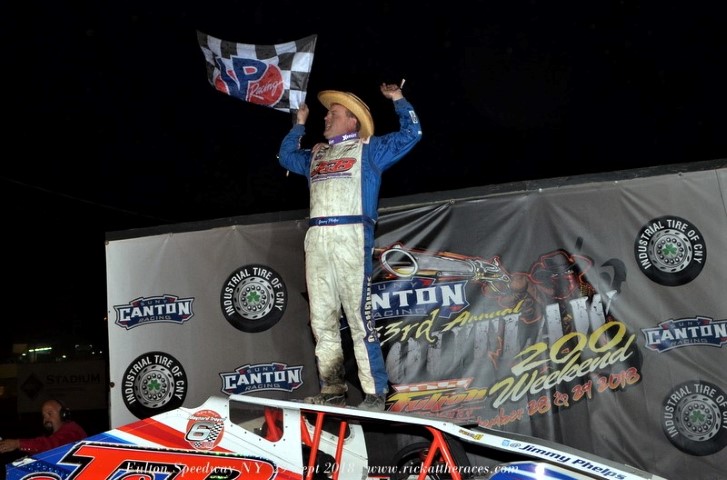 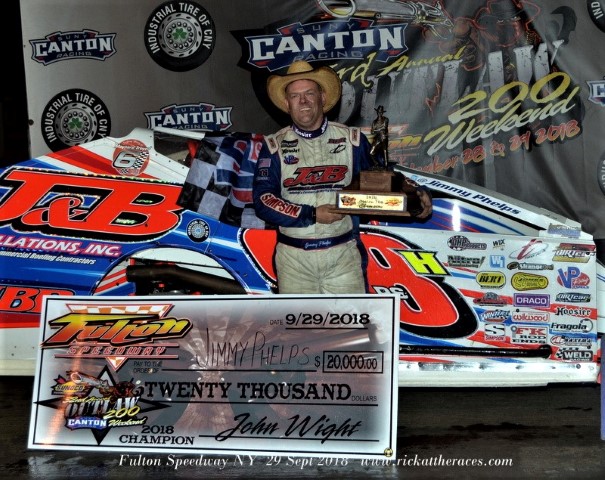 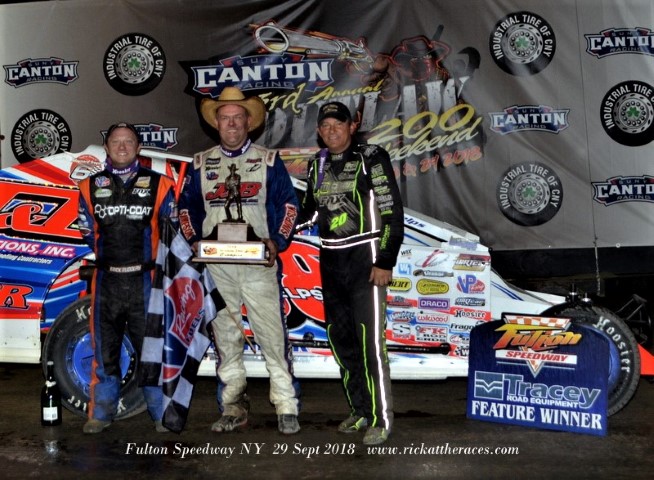 The second 100 laps went by with few stoppages and this was how it stayed to the checkers.

The extended track prep had added at least 30 minutes to the night, and by the time the Victory Lane shots were done , it was after 11-00 pm.

I made the decision to cross the border at 1000 Islands instead of Cornwall, and for once, this gamble paid off, there was no long line up and  I went straight through.

A long lay in bed was had on Sunday , then it meant  a couple of days relaxation before the start of Super Dirt week .