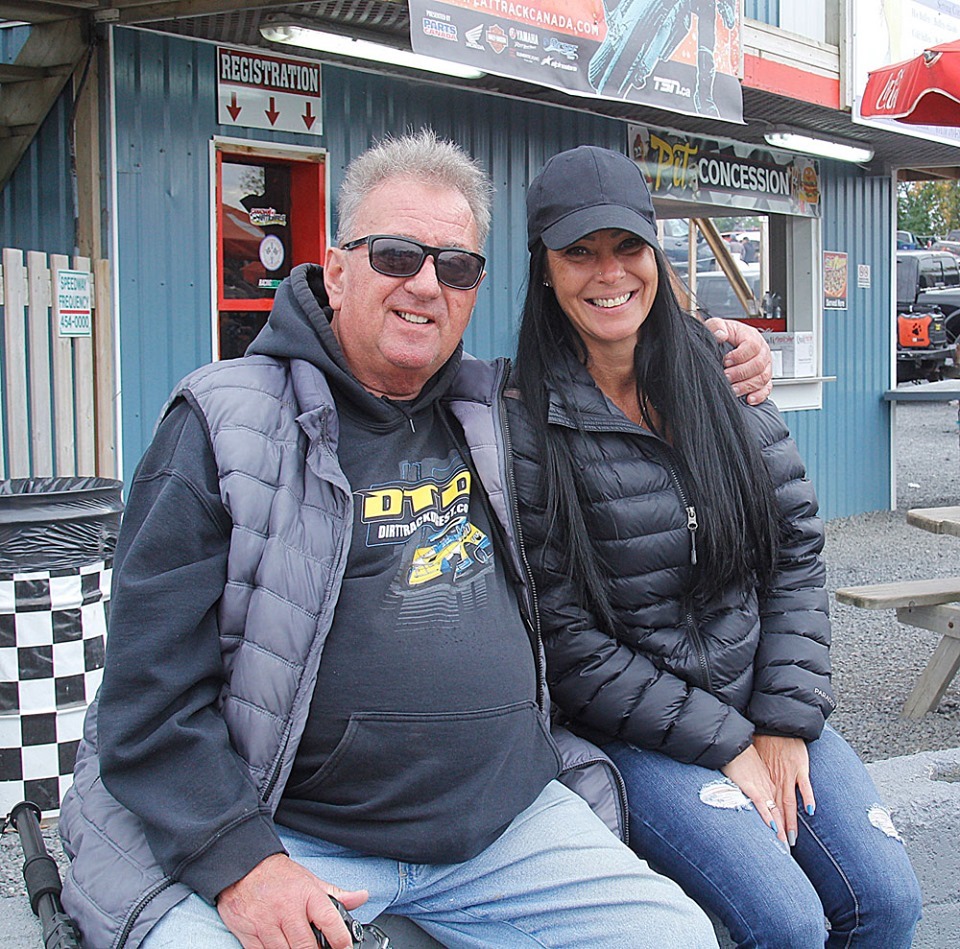 After the recent relapse of my MYASTHENIA GRAVIS condition, I’ve now been out of hospital and back home since Saturday 7th Sept.

I’ve been taking things easy , relaxing at home and taking advantage of the lovely fall weather.

There was a lot happening at my two local Speedways on the weekend of 13th to 15th September and they were events I didn’t want to miss.

I was still not ready to get back to my usual busy self, chasing around and taking pictures, so decided before going anywhere, that I’d attend in a much reduced capacity. I’d just take a few pictures and be a regular race fan again.

I was lucky to have my good friends Chanty Lesage and Don Simpson on hand to make sure I was OK.

Chanty became my minder for a weekend of racing that consisted of Friday and Saturday DirtCar Series races at the Mohawk International Raceway and a rain-postponed Canadian Nationals race at the Cornwall Motor Speedway on Sunday.

Both tracks , are located just ten minutes from my house.

The Friday night show consisted of the DirtCar series races for 358 Modifieds and Pro Stocks, with the Super DirtCar Series for Big Block Modifieds and the Sportsman Series taking place on Saturday.

On Friday, the 358 and Pro Stock program was boosted by Sportsman and Mod Lites, and in the twenty plus years that I’ve been attending the M.I.R  (FKA Frogtown Speedway) I have never seen the pits so full. There were race cars everywhere and staff were having difficulty finding spaces for them to park.

This and the shear amount of qualifying races needed, led to a show that was destined for a late finish.

Chanty and I were there early and were able to get my car close to the pit gate, and on arrival were able to spend some time with our friends on the Rob Yetman Pro Stock Team. 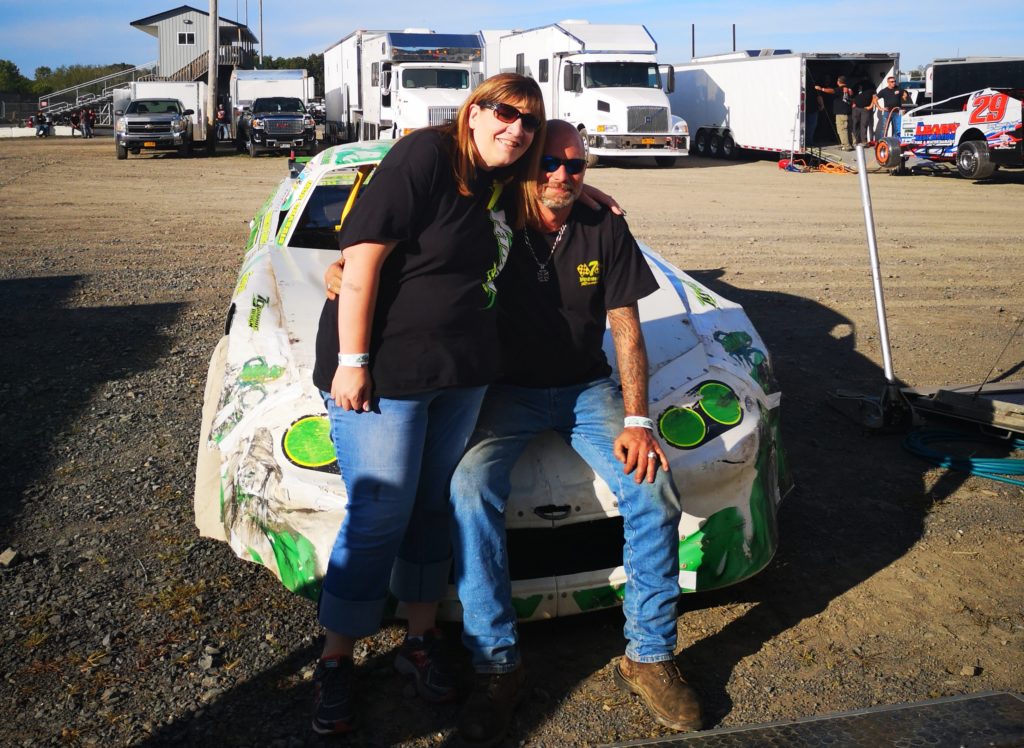 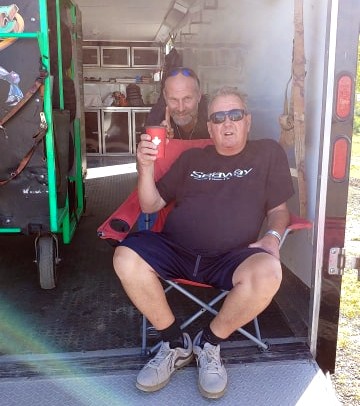 Once things got underway, we spent most of the night around the Tech garage, where, Ted Lesage, Chanty’s dad can be found. 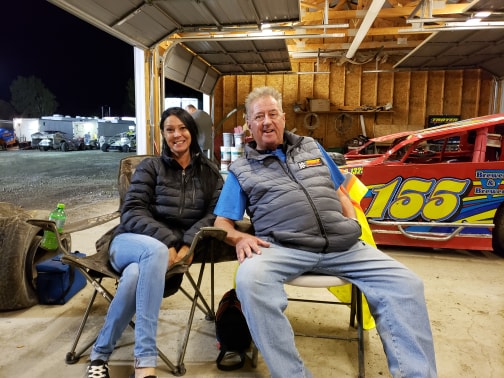 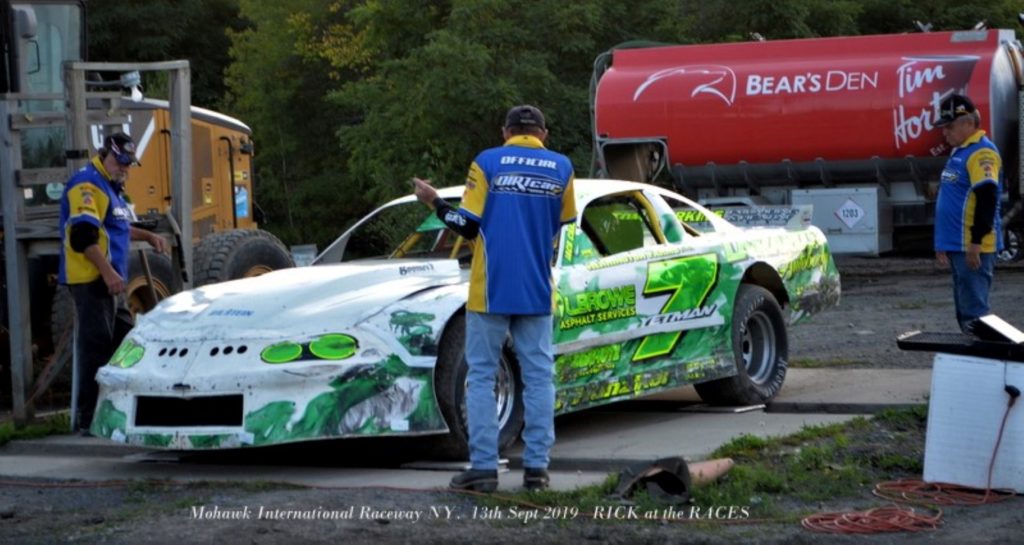 I took most of my pictures from there, until the heat races began, which we watched from the pit grandstand. 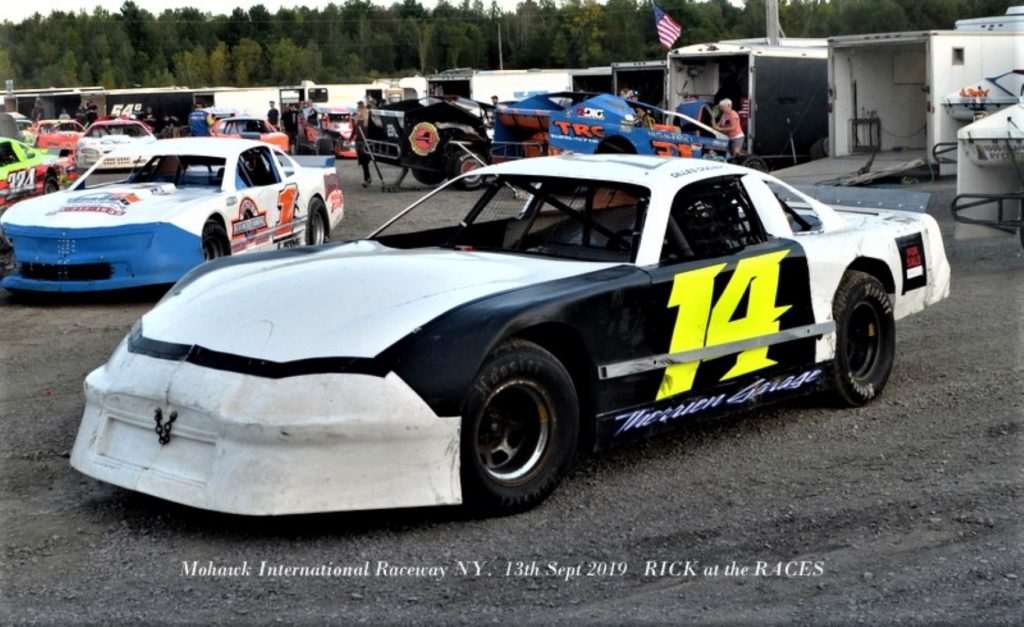 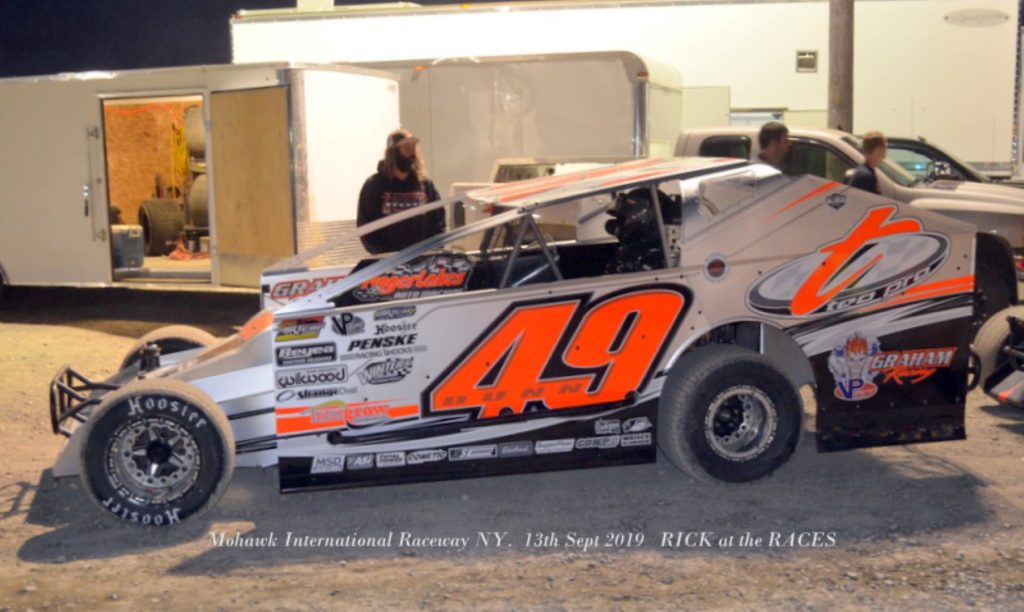 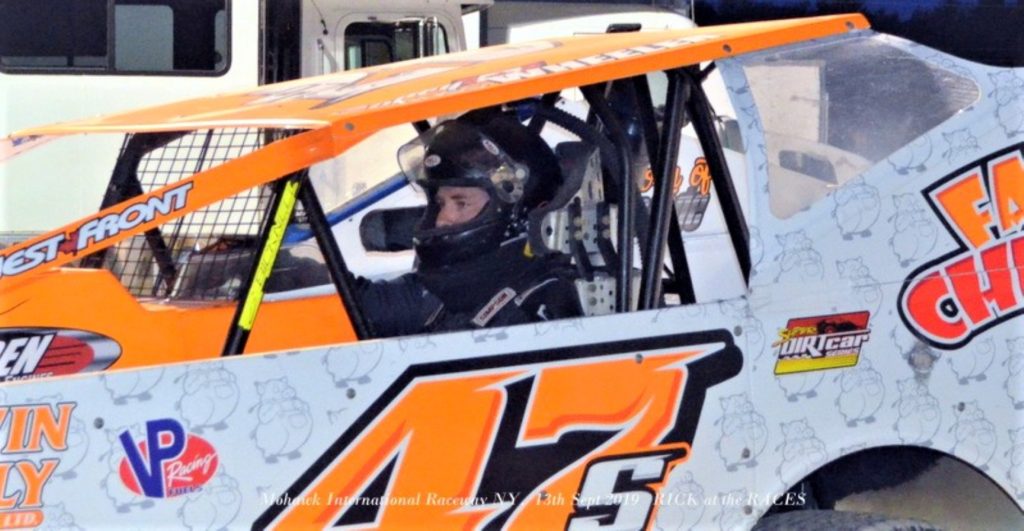 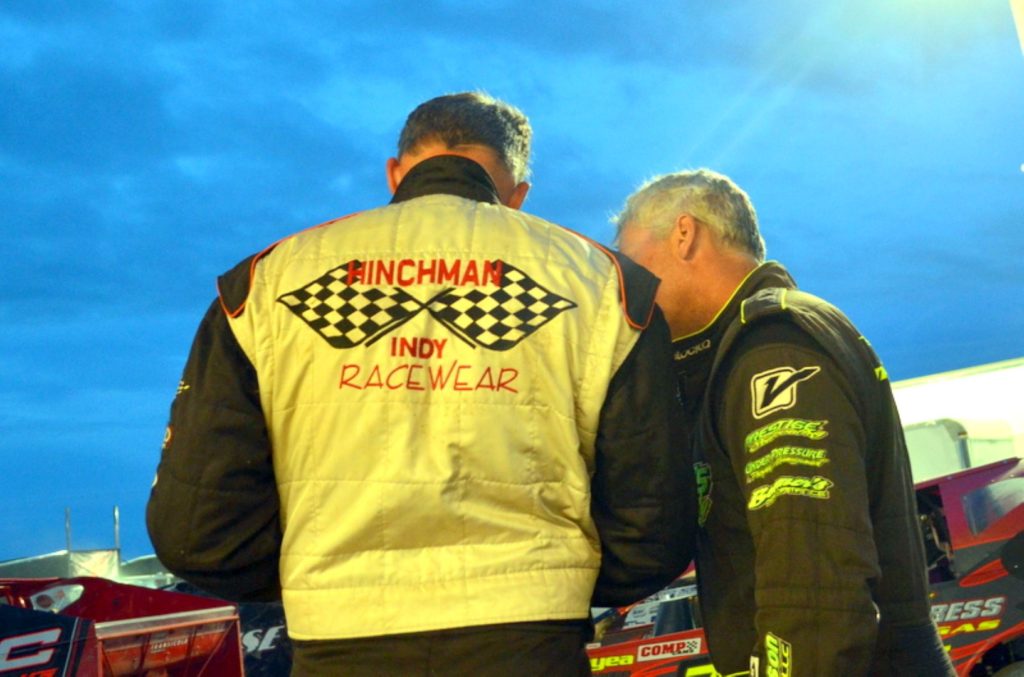 The delayed start, and the unexpected extra cars, meant a late finish, and by mid night the main features were yet to run.

This is where I made my exit, because I didn’t want to push my luck, with the ongoing health issues. 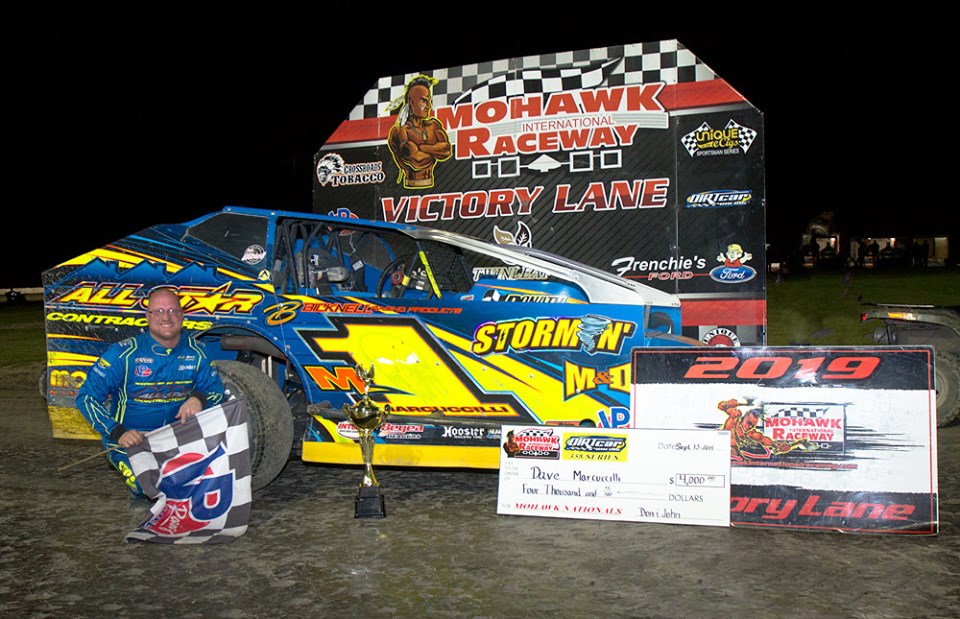 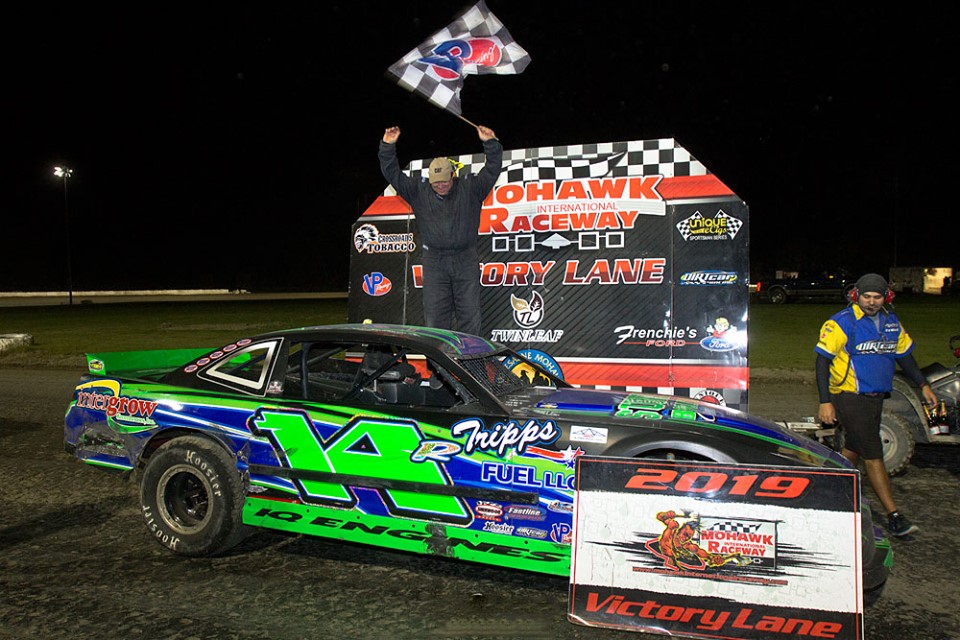 Victory Lane Pictures, are the work of my buddy Don Simpson.

Chanty and I were back over the International Bridge at the M.I.R again on Saturday night for the Big Block Super DirtCar Series and Sportsman. 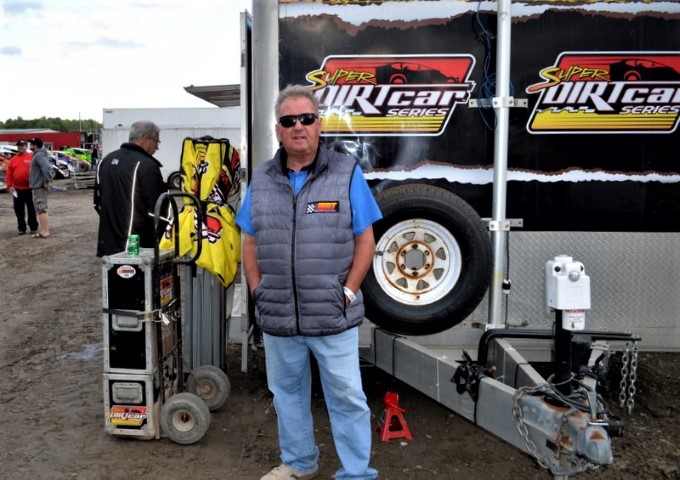 Once again we based ourselves at the Tech garage, where I could take things easy. 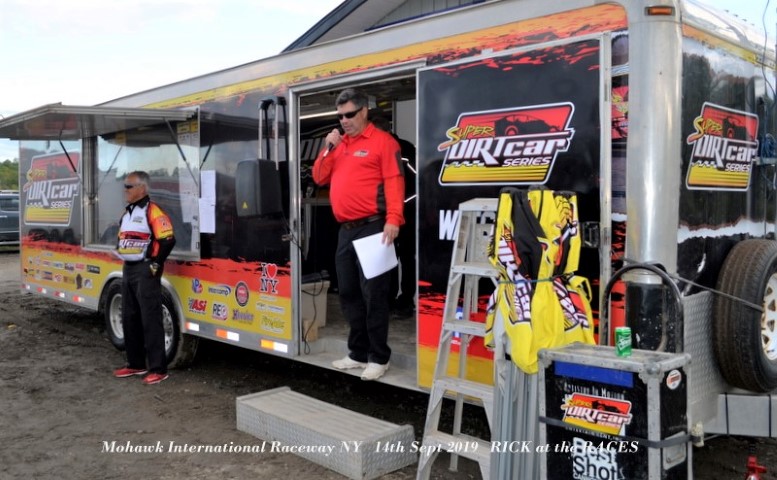 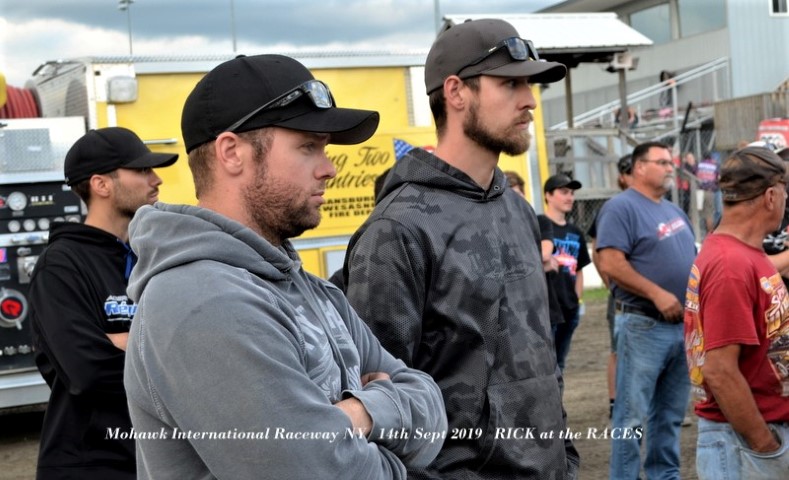 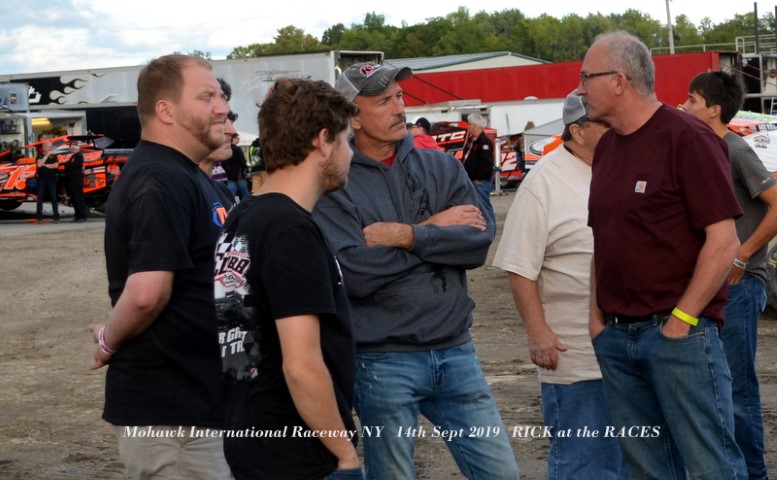 The DirtCar trailer was parked along side , so it was handy for getting some drivers pictures. 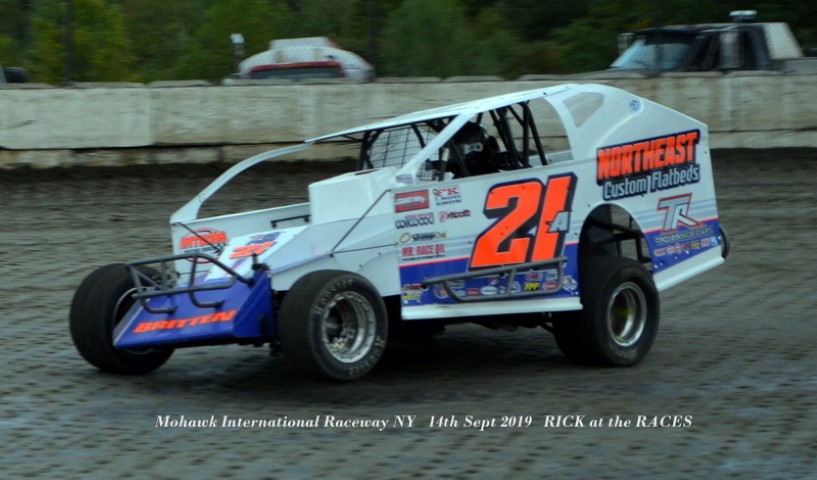 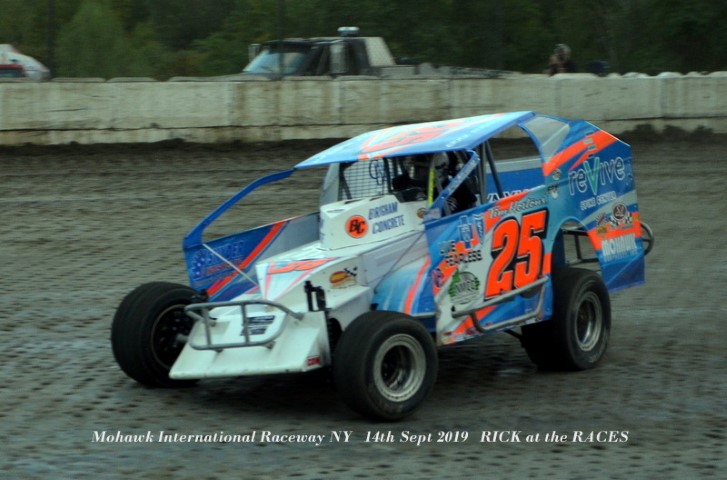 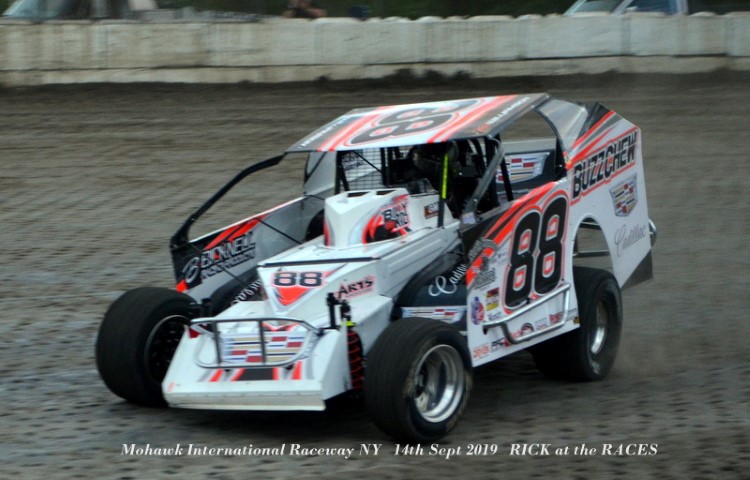 Apart from a few shots from the middle during hot laps, I restricted my picture taking to the pits.

Just like the night before, we watched the racing from the pit grandstands. 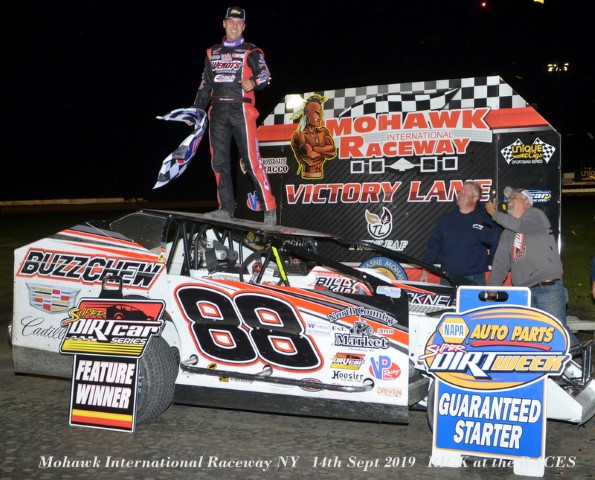 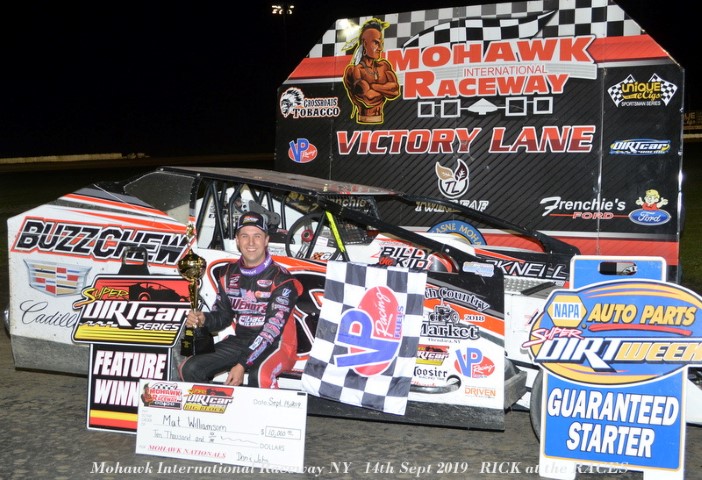 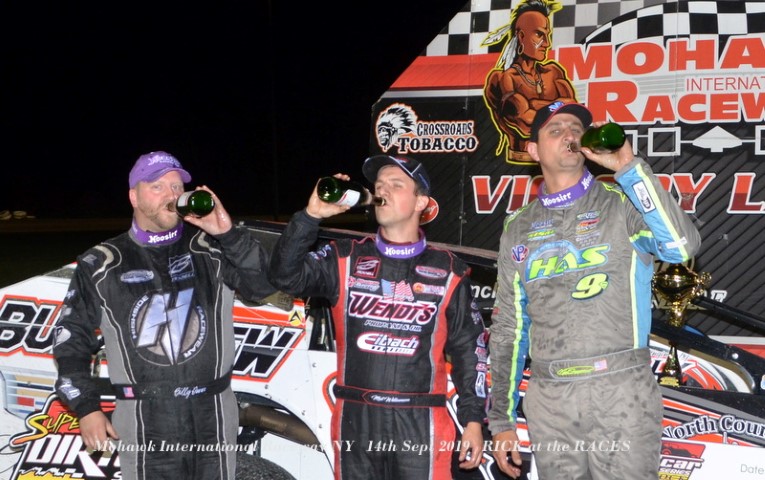 The big race of the night, the SDS, was won by Canadian, Mat Williamson, and I was given a ride down to Victory Lane to get my pictures by one of the M.I.R staff .

The Sportsman Series race followed, and was won by Robert Delormier. 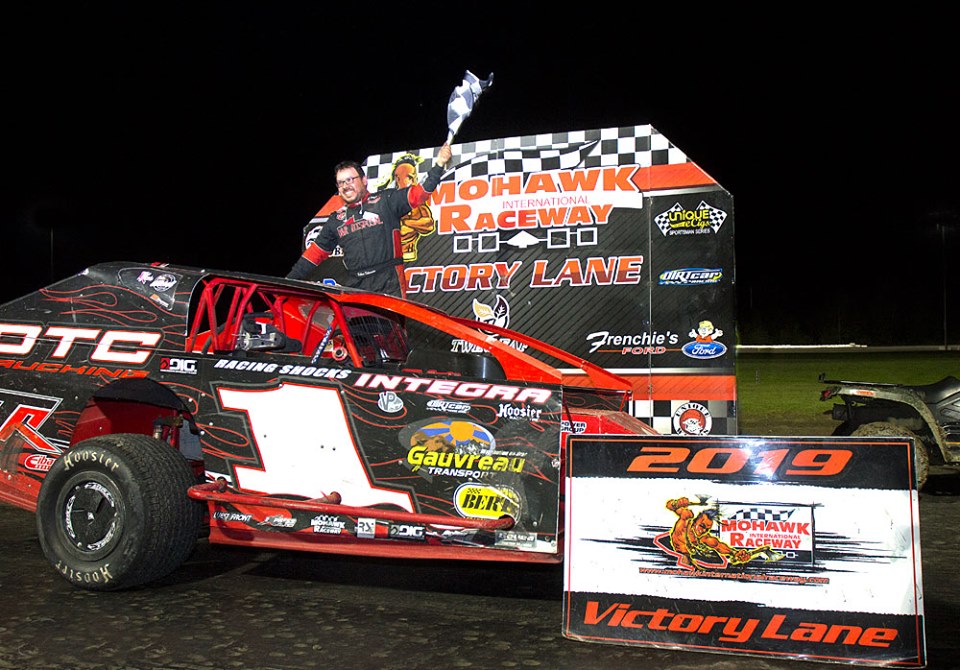 Again I have to thak my buddy Don Simpson for the Victory Lane picture.

On Sunday there was an extra event to the the Cornwall Motor Speedway 2019 schedule.

On the 1st September , the Canadian Nationals for the 358 Mods had to be cancelled when it rained after the heat races so the remainder of that show was taking place.

Chanty continued to be my ‘minder’ for this one and for most of the night, we stayed in the pits. 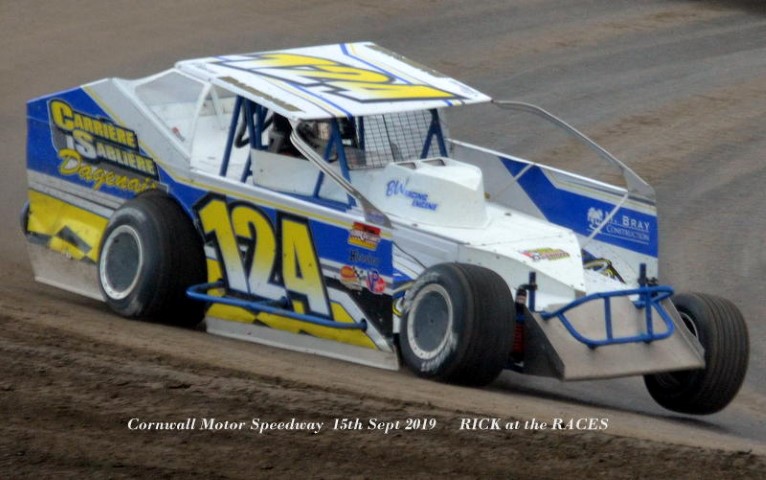 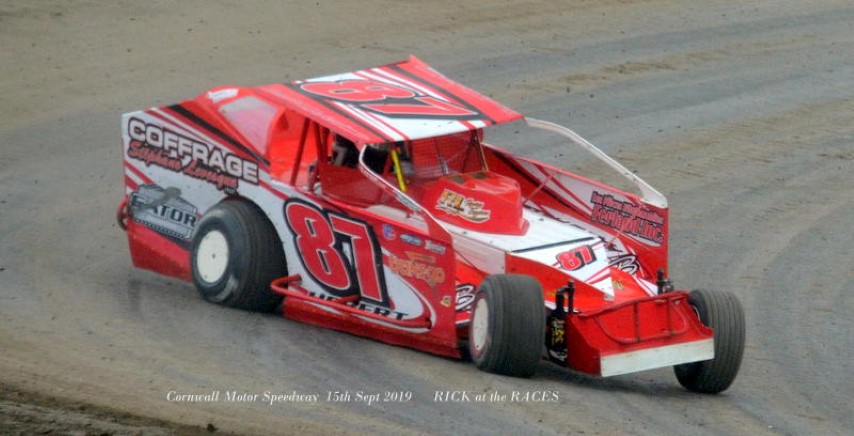 I took a few pictures of the hot laps from the pit tower, but for most of the night I watched from the tech shack.

When it came to the 125 lap feature, I was taxied down by golf kart to the middle during the mid race pit stop. From there, I watched the last 50 laps from the middle with my buddy Ron Morin from his kart. 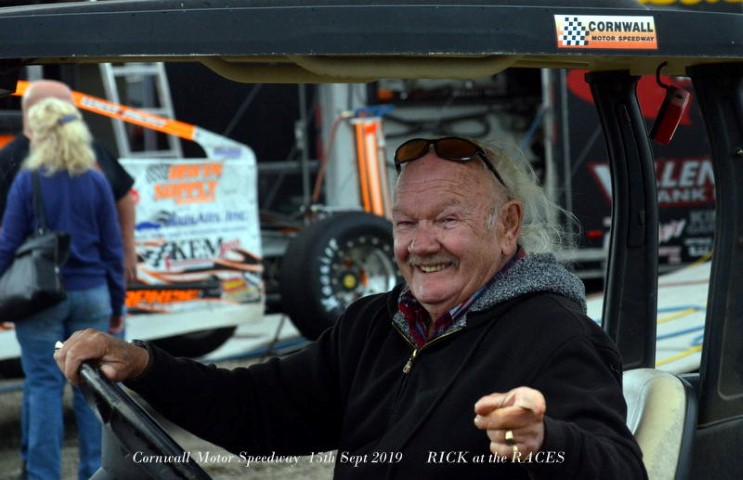 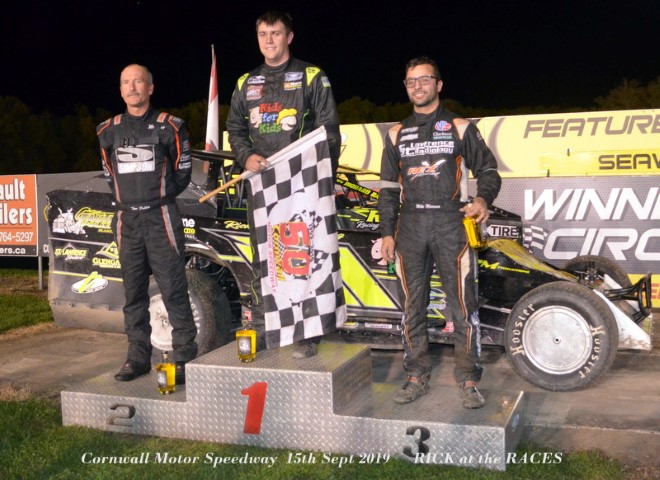 After Tim Fuller led for most of the race, a late race caution gave Chris Raabe the chance to pass and grab the checkers. 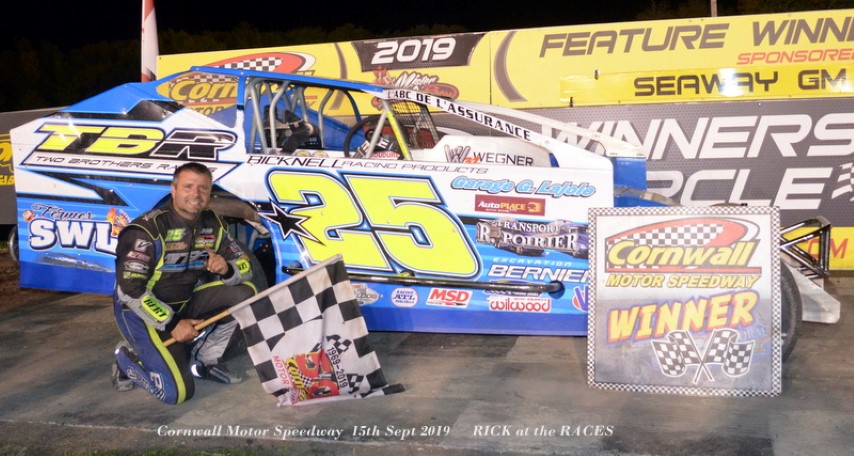 So, I survived my first weekend back at the tracks, since the latest hospitalization. Thanks again to my good friend Chanty for being there,  I’m still taking things day by day, and hoping to be full of energy for the big races coming up in October.