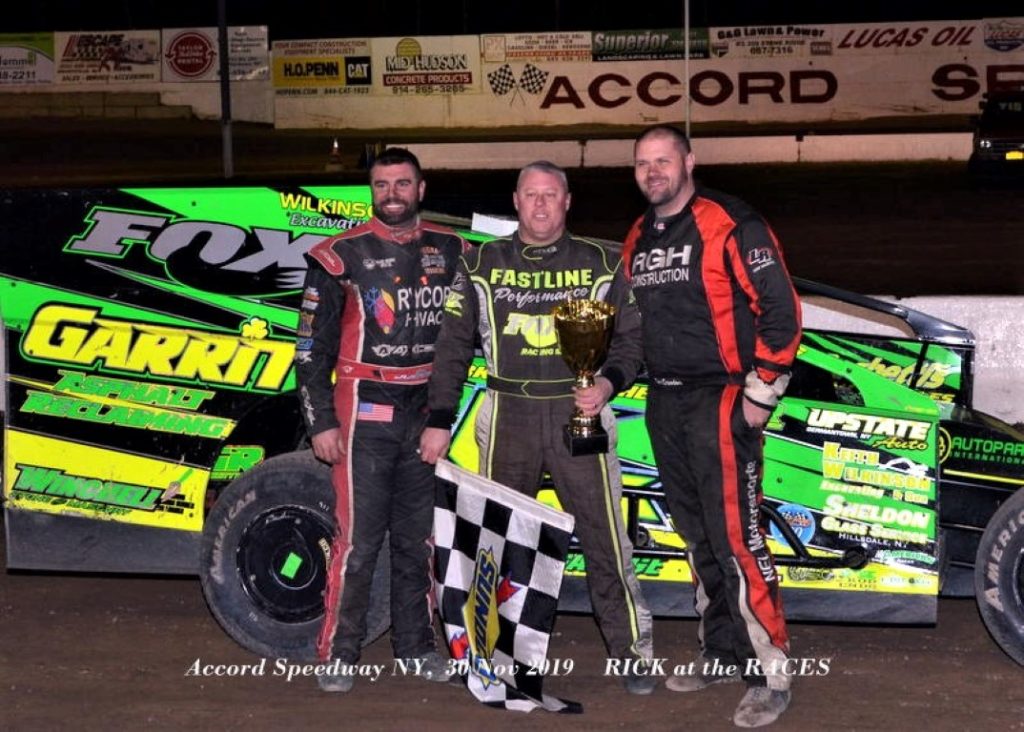 It was road trip time, this past weekend when my ‘tog buddy’ Don Simpson and I , headed off to the Accord Speedway in the Catskill Mountains of up-state New York.

Each year around American Thanksgiving time entrepreneur and roving promoter, Brett Deyo, takes over the track to stage ‘The Gobbler’.

It’s an event that Don and I have wanted to attend for a number of years, but for one reason or another (usually uncertain weather) we never made it.

This years ‘Gobbler’  was scheduled for Saturday afternoon( 30th Nov)  at 1-00 pm and the weather forecast looked good . Although it would be cold, the sun would be shining and no sign of rain, so we decided to go for it.

It takes at least five hours of driving to get there so instead of leaving in the early hours of Saturday morning, we decided to set off Friday night and get most of the journey done.

Leading up to the weekend, I had I.V.I.G transfusions on Thursday and Friday at the Cornwall Hospital, so it wasn’t until around 5-30 pm that we got away.

We  crossed into the USA at Cornwall , and drove down via Plattsburgh and the I87 to Albany.   Don’s wife Lise, had gone on-line and found us a good price at the Quality Inn.

From Albany , it’s about another hour and half of driving, so on Saturday , we were at the track well before midday.

This was my third visit to the Accord Speedway and Don’s first.

On arrival, and after signing in, the first person to greet us was Santa. 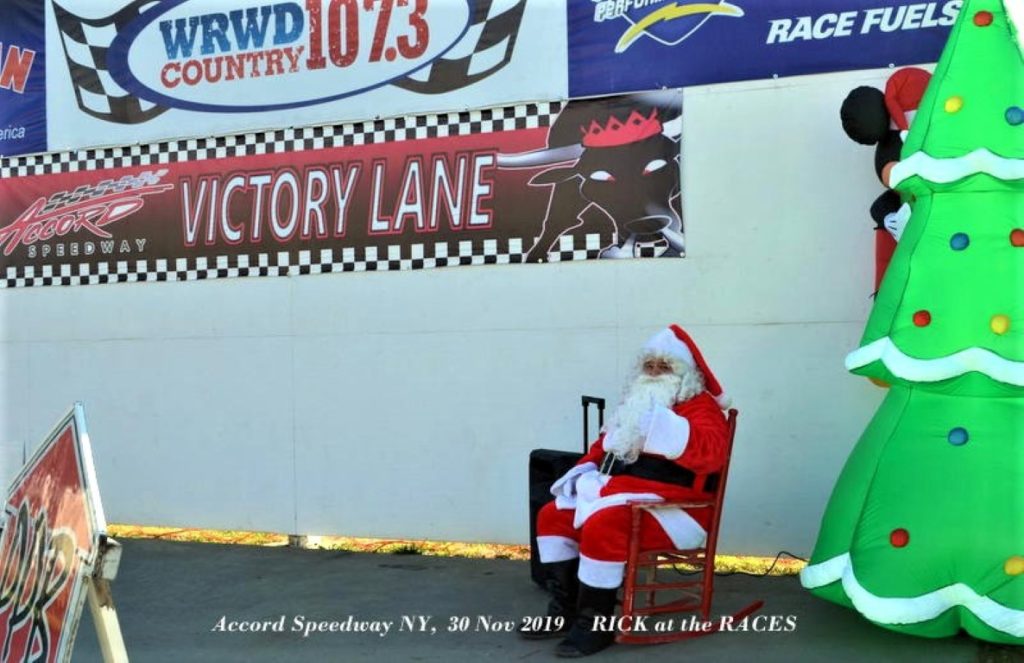 I must have been good this year, because he gave me a candy-cane. 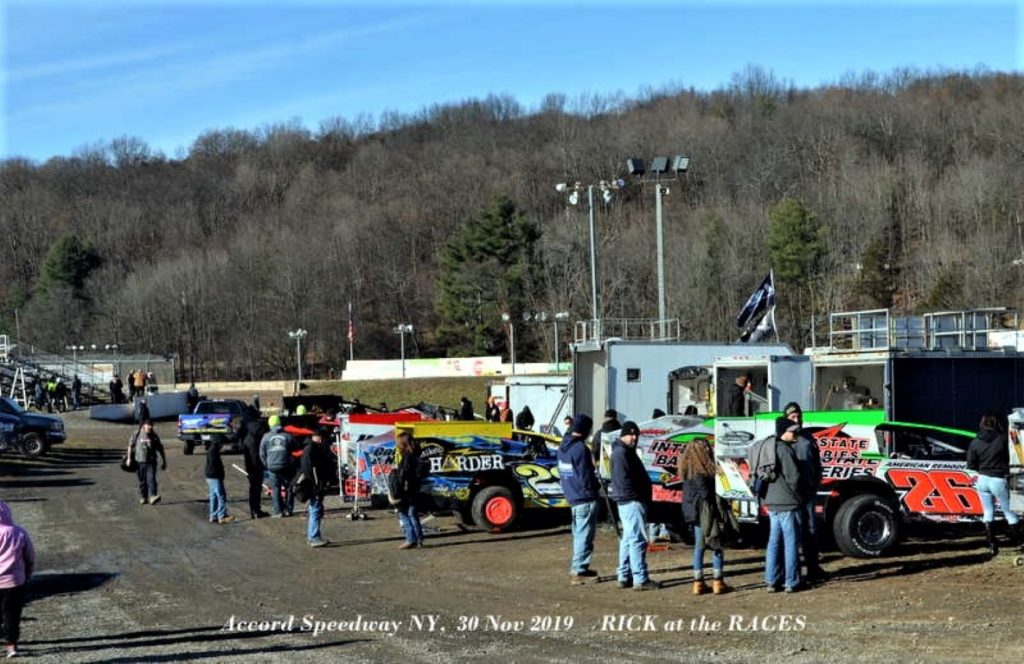 After a brief wander around the pits, we joined the other ‘togs’ on the middle. 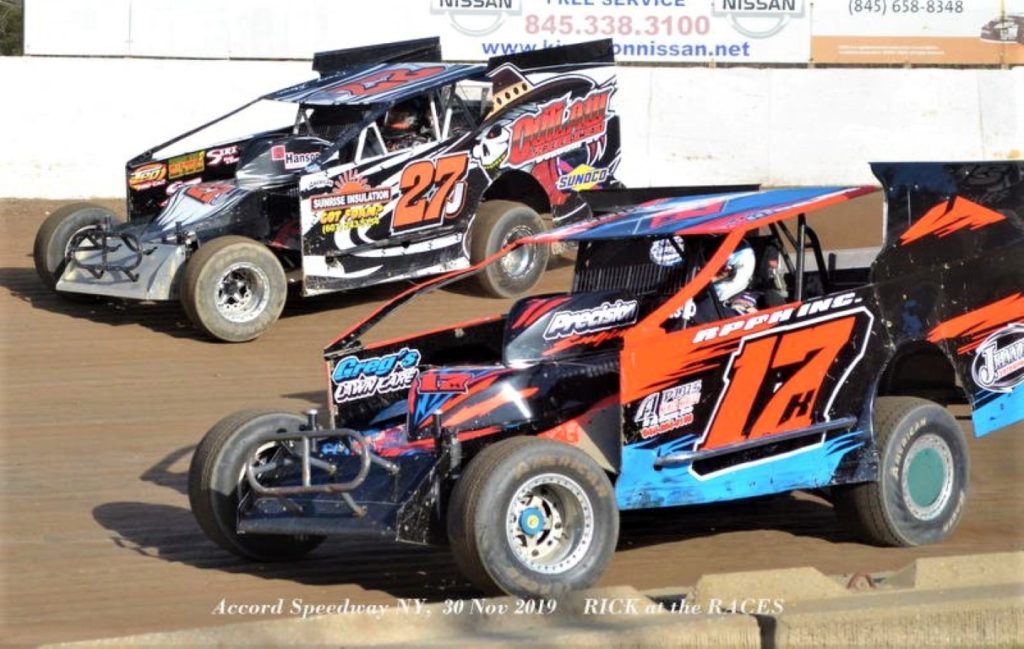 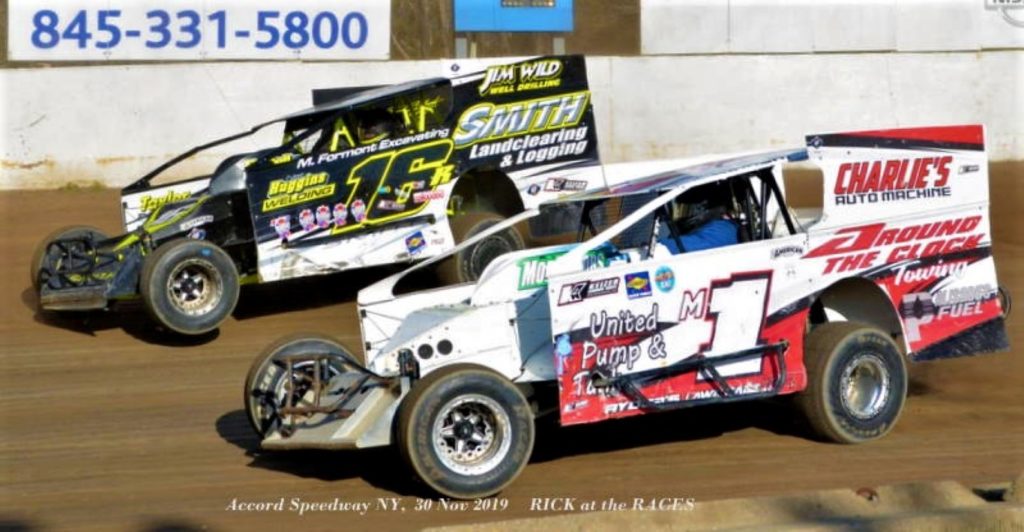 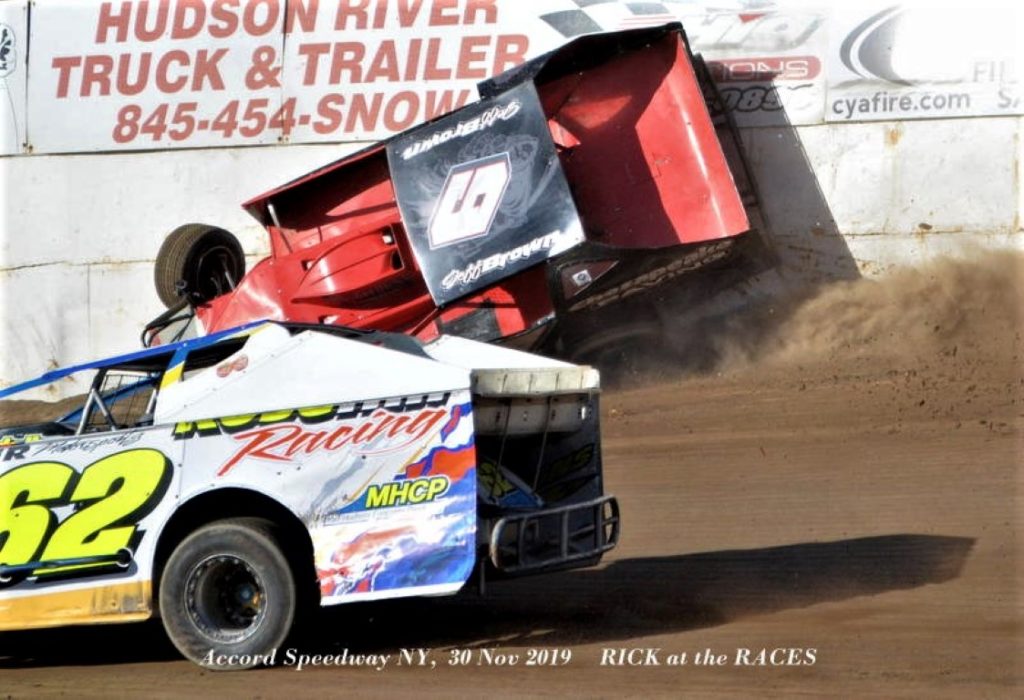 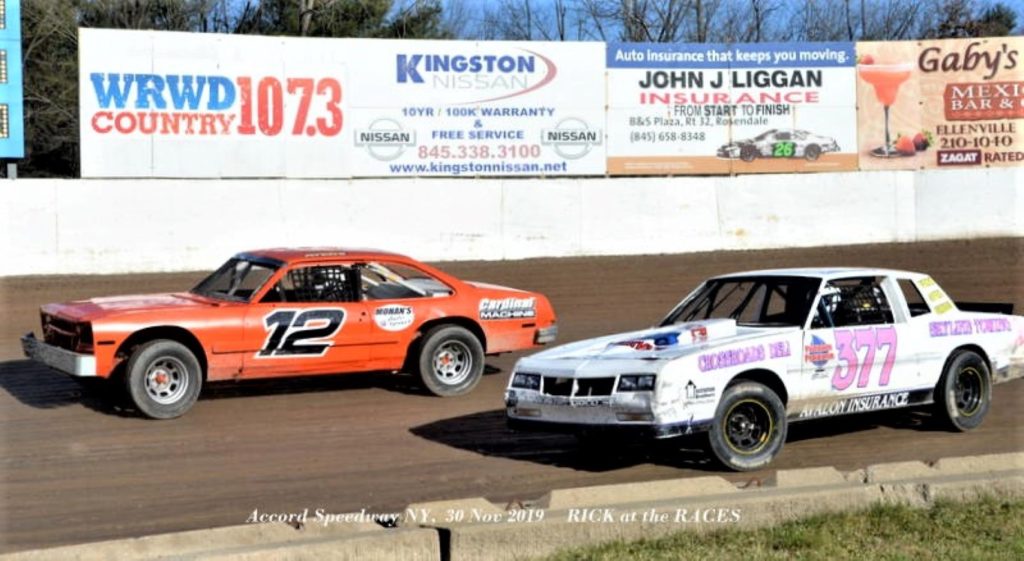 With a big snow storm in the forecast for the next day,  they ran the show as swiftly as possible, with the 30 lap Sportsman feature taking place ahead of the 50 lapper for the Modifieds. We were hoping it would be the other way round, but it is what it is.

Thankfully the Street Stocks Feature and the Enduro were the last events to run, because we were hoping to be back in Canada before mid night and  the snow began. 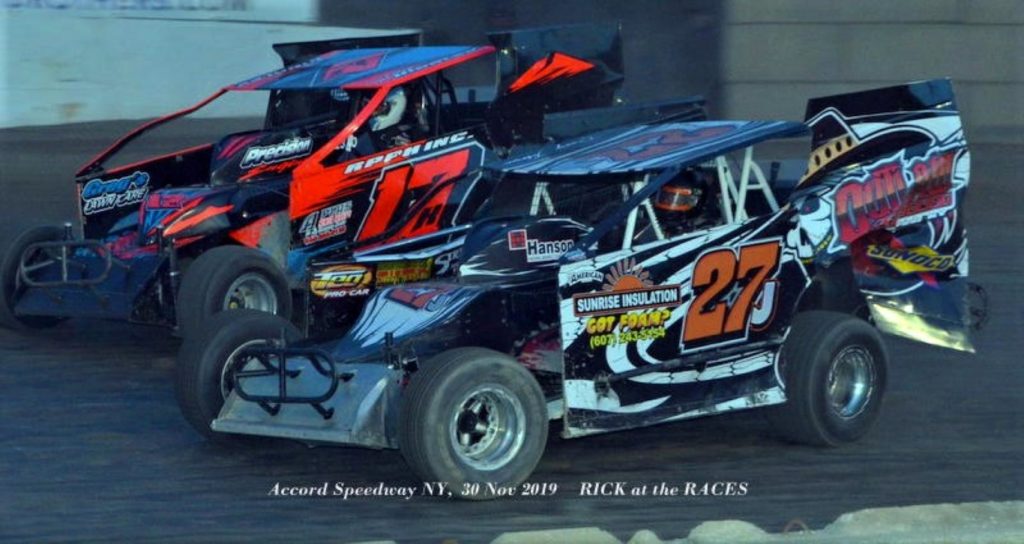 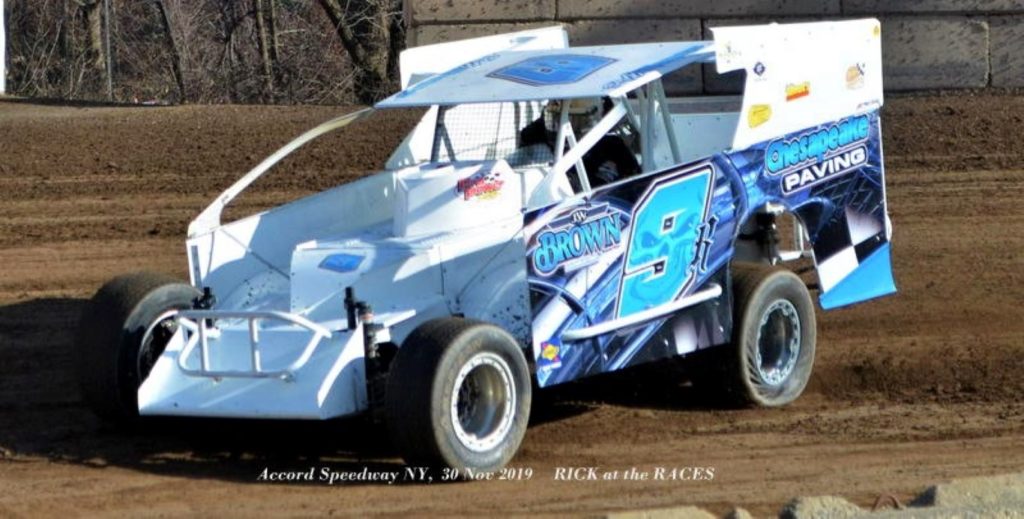 Danny Johnson in the 27J Tyler Siri car and Erick Rudolphe in the Brown Racing # 9.

All the heat races went well and following the intermission the features took place.

It was this point where our chances of getting home early, looked like diminishing . The Sportsman Feature took an eternity to get done , following caution upon caution. 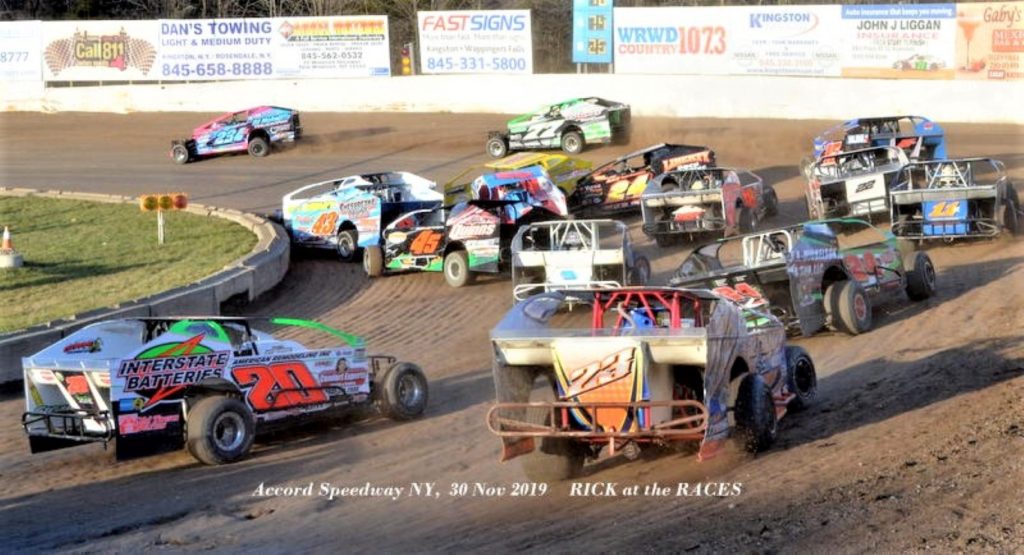 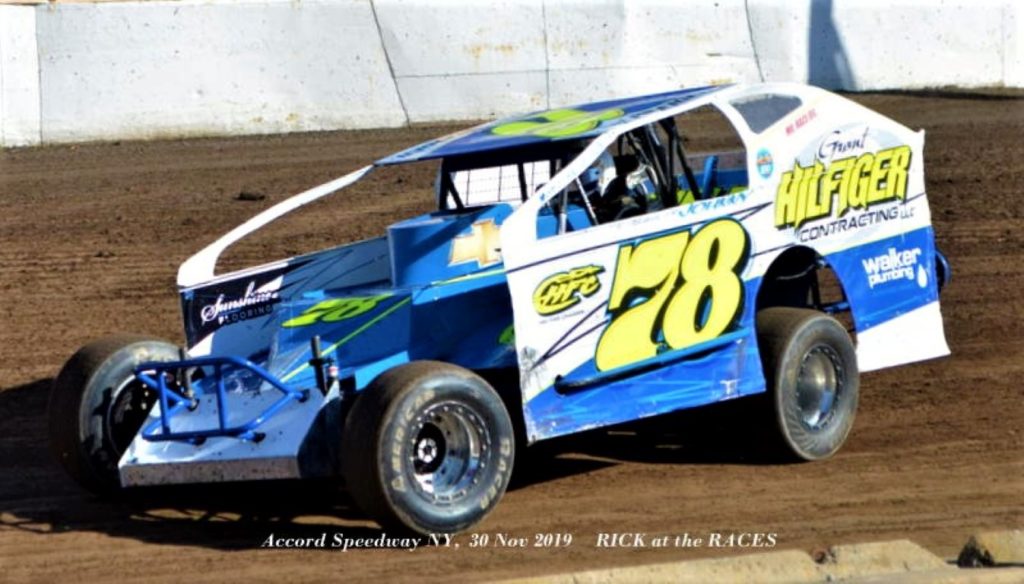 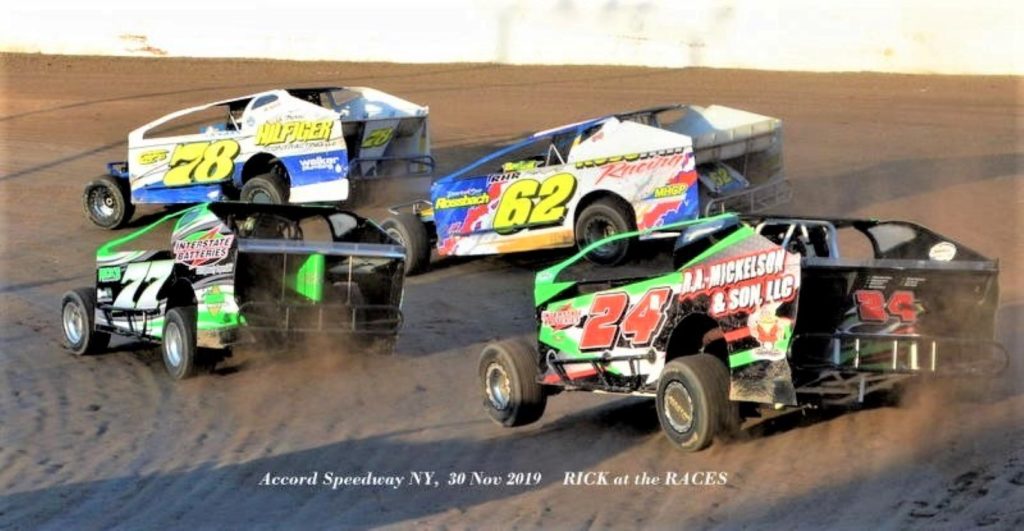 Eventually the winner was # 78 Grant Hilfiger.

Once this was over the Modifieds were quickly out for their feature and on the first lap there was a huge pile up that blocked the track. 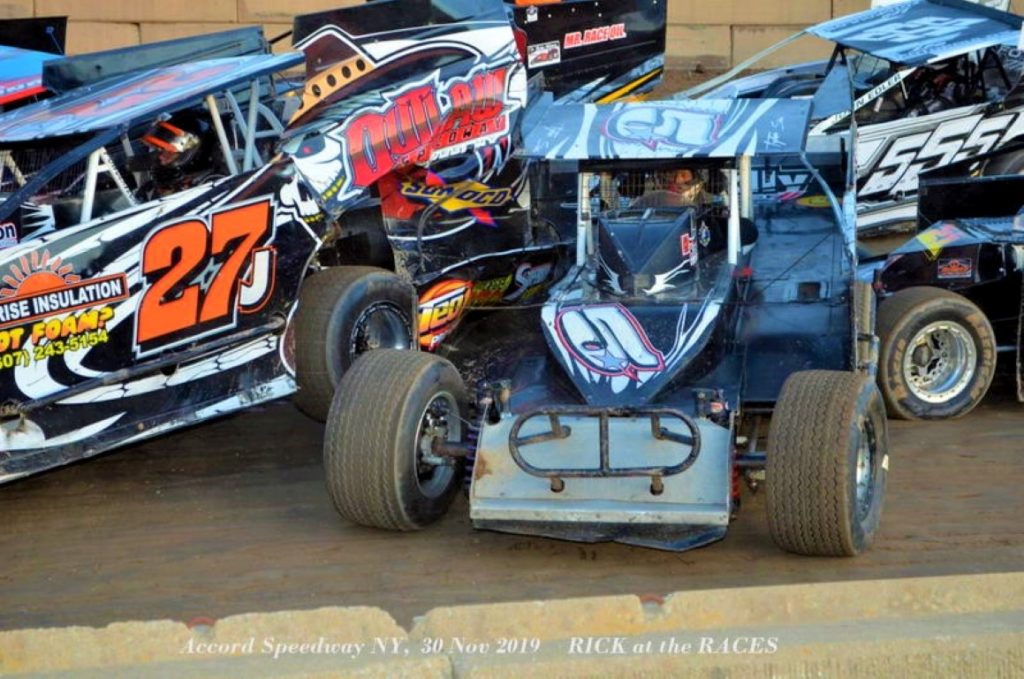 The race was restarted,  and for a while , this went pretty much the same as the Sportsman, with numerous cautions. By the mid way stage they started to settle down and we got some decent racing. 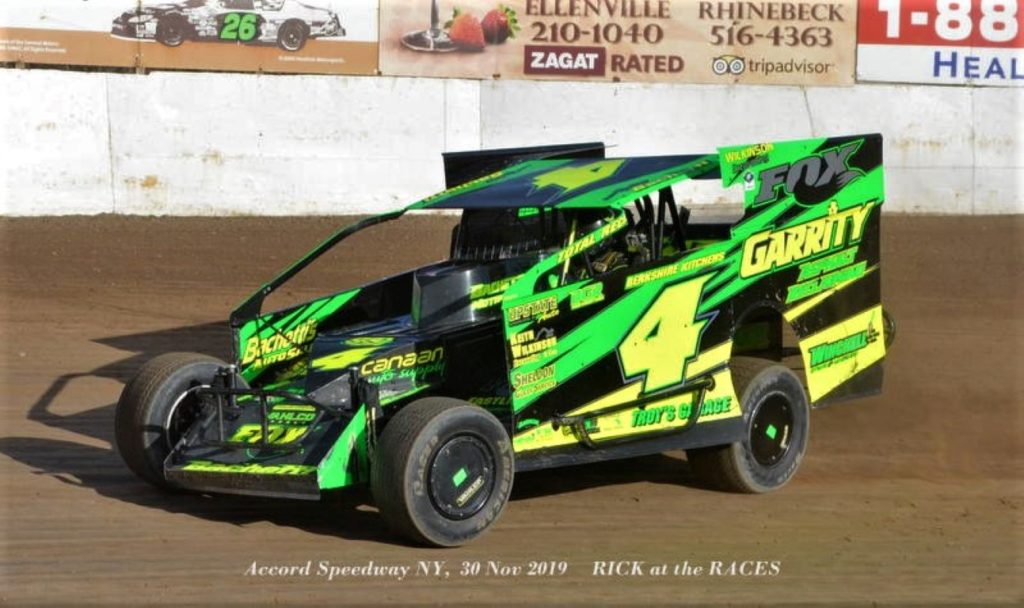 Andy Bachetti soon worked his way to the front and that’s where he stayed until the checkers. 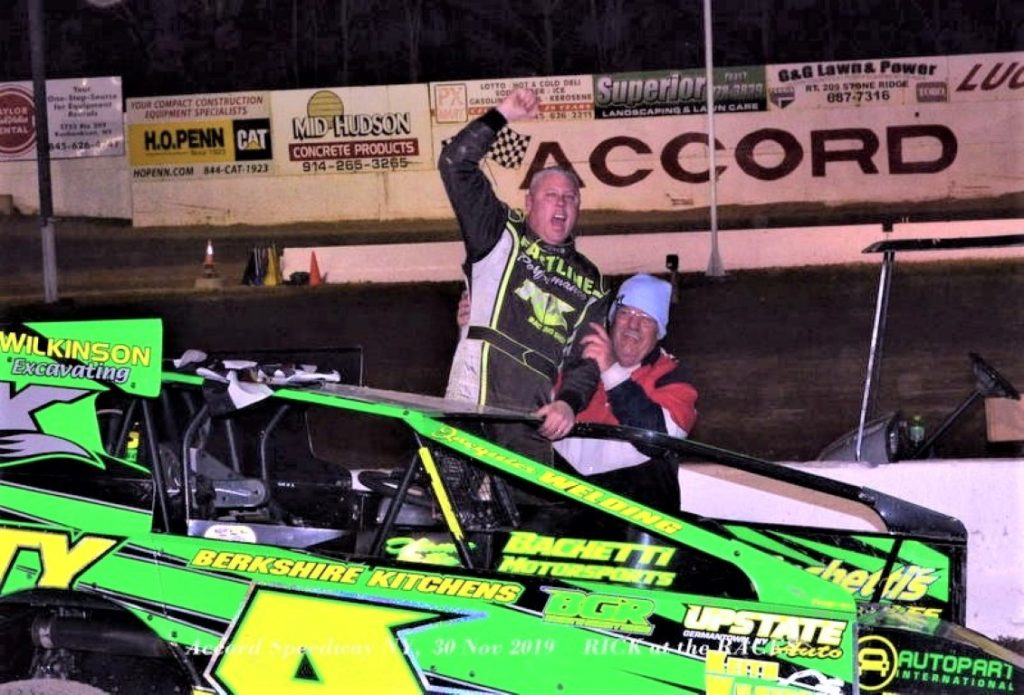 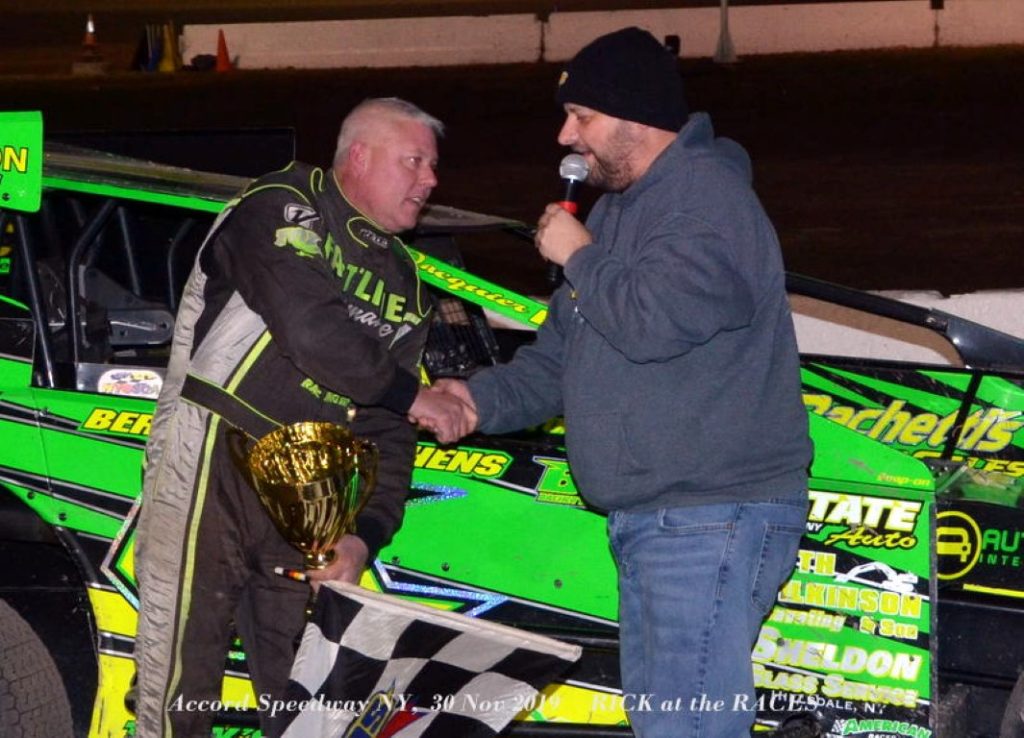 By now the the bitter cold was getting unbearable so as soon as the Victory Lane pics were done, we were back in the car and driving out the gate.

It was still only 5-00 pm and we still had high hopes of getting back to Canada before mid night.

Things were going well until we got on the I 87 North. About ten miles before the Coxsackie exit, the traffic came to almost a stand still. We gradually moved forward at a crawl for about an hour until the road cleared. We were running short on gas and as soon as we could find an exit, we filled the tank. It was at this point we found out the reason for the delay. Apparently and RV had crashed.

Time by now was getting late, and it was 8-45 before we pulled into the  Diner at Malta to eat.

As we reached the Plattsburgh area a few flakes of snow began to fall, they were nothing serious, and had stopped by the time we got back into Canada at 1-00 am.

Quite the trip, and I was glad we got back before the predicted storm.

I had to set my alarm clock on Sunday morning.

The final Grand Prix of the F1 season was taking place in Abu Dhabi and as usual it was live on TV. The green flag was at 8-10 am Eastern Time and I wanted to be out of bed in good time and sitting on my couch with a cup of tea in time to see it.

As a contrast to the last GP in Brazil, this was’nt very exciting, and  in my opinion, pretty uneventful as a Lewis Hamilton in his Mercedes took a flag to flag win.  Second was Max Verstappen (Red Bull) and Charles Leclerc  (Ferrari) was third