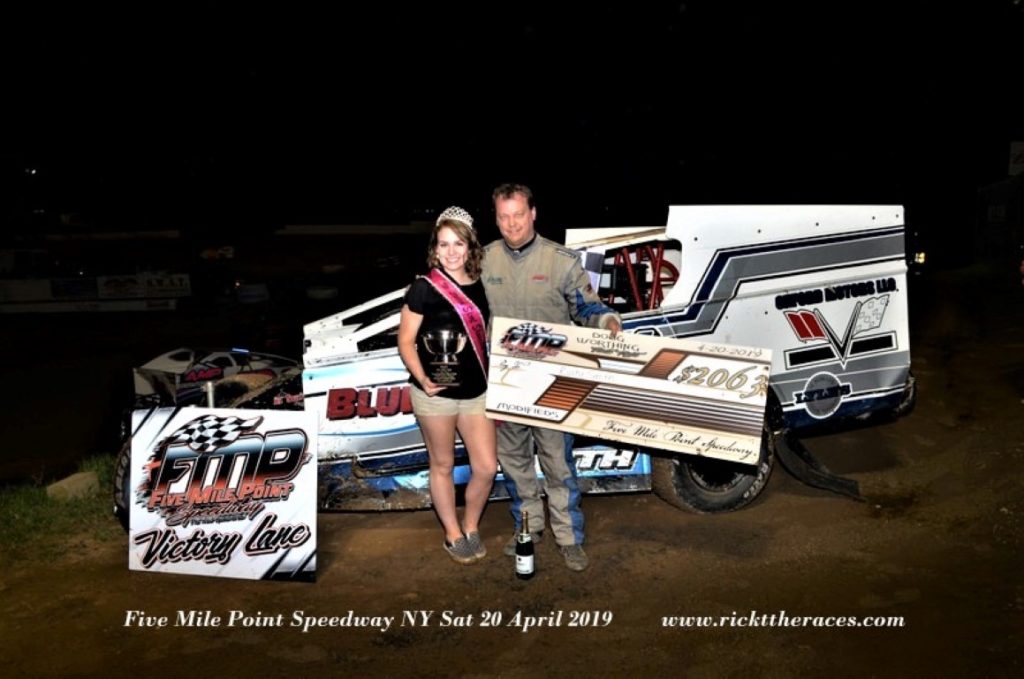 It was a quiet week for me, leading up to Easter, with not too much going on.

The weather for the weekend didn’t look good, with plenty of rain in the forecast. The best of the weather, was supposed to come on Sunday, but unfortunately for race fans , Easter Sunday in North America is a difficult day to find much taking place. Saturday was the best day for racing ops, with about four possibilities that were do able .

On Good Friday , my nearest option was the Albany-Saratoga Speedway at Malta NY

So, my plan for the weekend was to join my ‘tog’ buddy Don Simpson for a road trip to the Fonda Speedway NY on Saturday.

As the weekend got nearer, it became evident that the meteorologists had got it right. The rain started falling on Thursday and affected most of the North East. The first casualty was at Malta, with their season opener getting postponed to Tuesday 23 April . The Outlaw Speedway at Dundee on Friday, also fell victim.

Don and I decided to head south towards Fonda early Saturday, and to check the status of events, during a coffee  stop in Watertown . We were at the Tim Hortons on the outskirts of the city around 11-30, and after looking on social media, we soon found the announcement that Fonda was cancelled .

The Canandaigua Speedway NY , one of our plan B’s had also been cancelled. Our other main possibility for some Dirt Modified racing was the Five Mile Point Speedway. The races there were still on, and there were positive  comments regarding the weather.

So,  we left Watertown around mid day and set off in that direction. The racing was scheduled to start at 6-30, and after we’d stopped for eats in Cortland, were at the track before 4-00 pm.

The weather was definitely warmer and dryer  in the Binghamton  and Five Mile Point area.

With racing cancelled at many of the other NY tracks ,  a few additions were attracted . 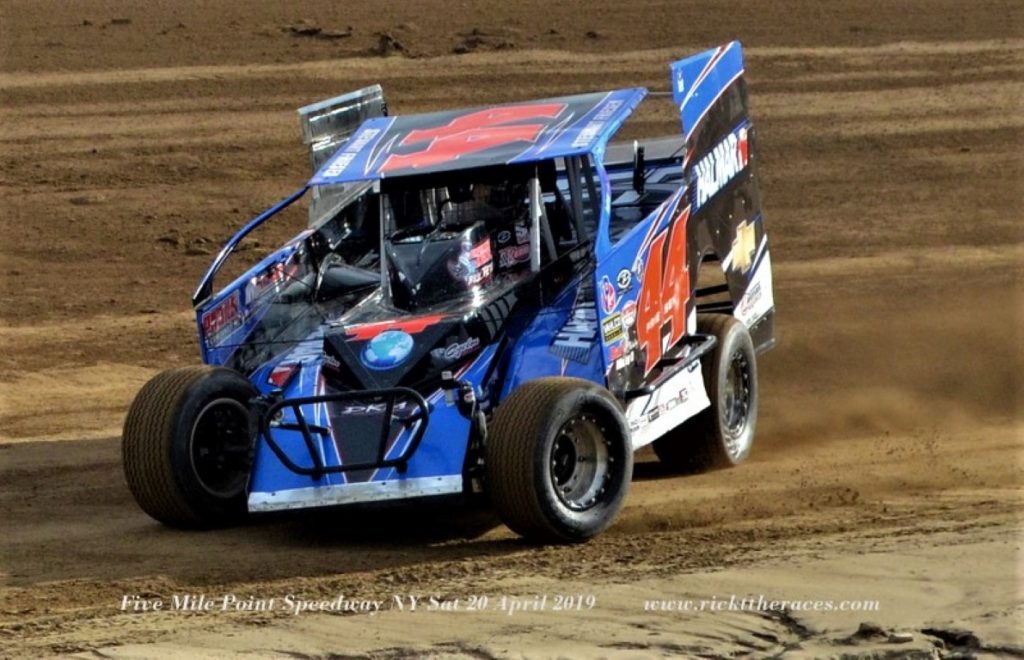 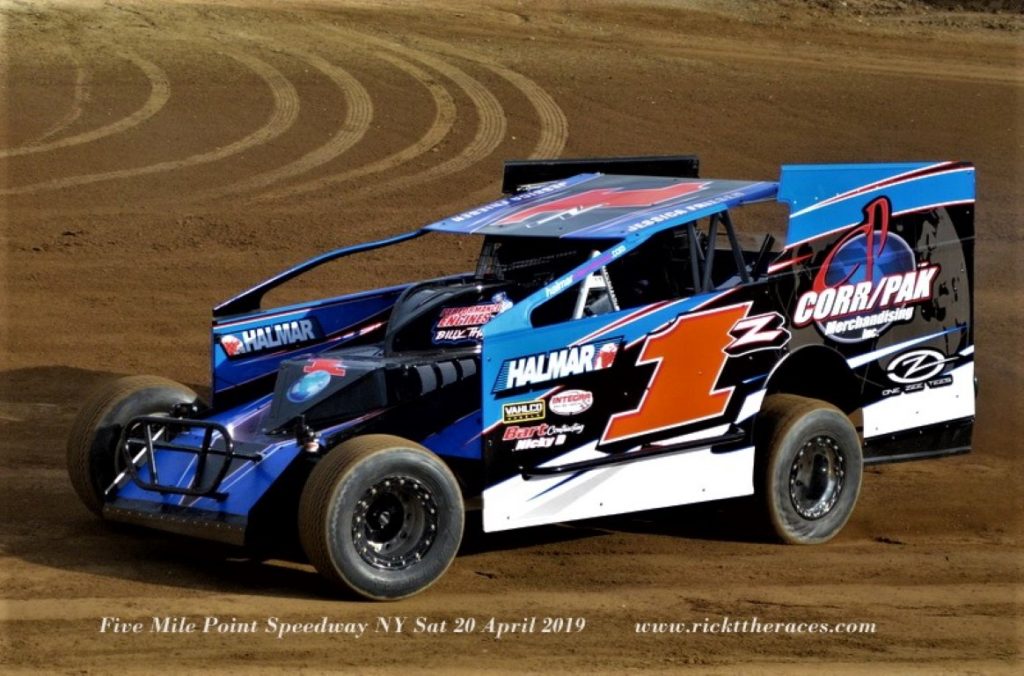 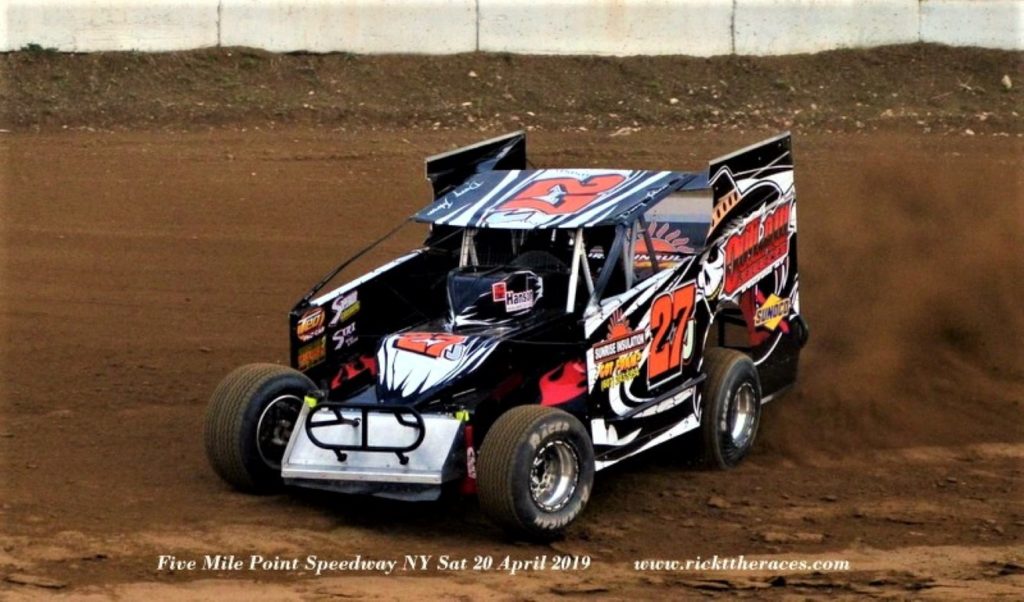 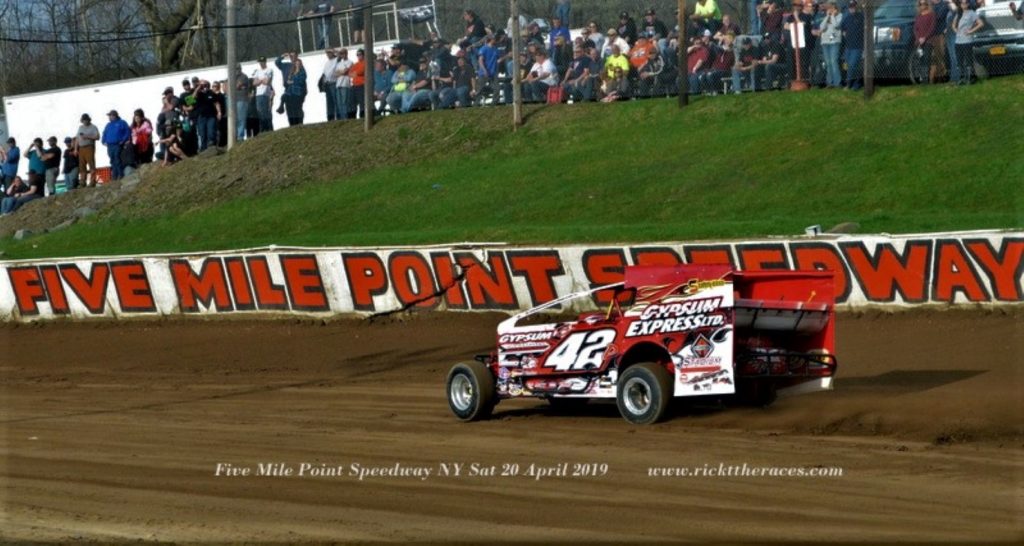 The most notable being Stewart and Jessica Friesen, Danny Johnson and Pat Ward.

On arrival I put my camping chair in the middle and for most of the night took pictures on turn two.

There were a few other ‘tog’ buddies present, and one of them, Alex Borland took this pic of me.

There was plenty of action during the heat races including a roll over by PJ Goodwin. 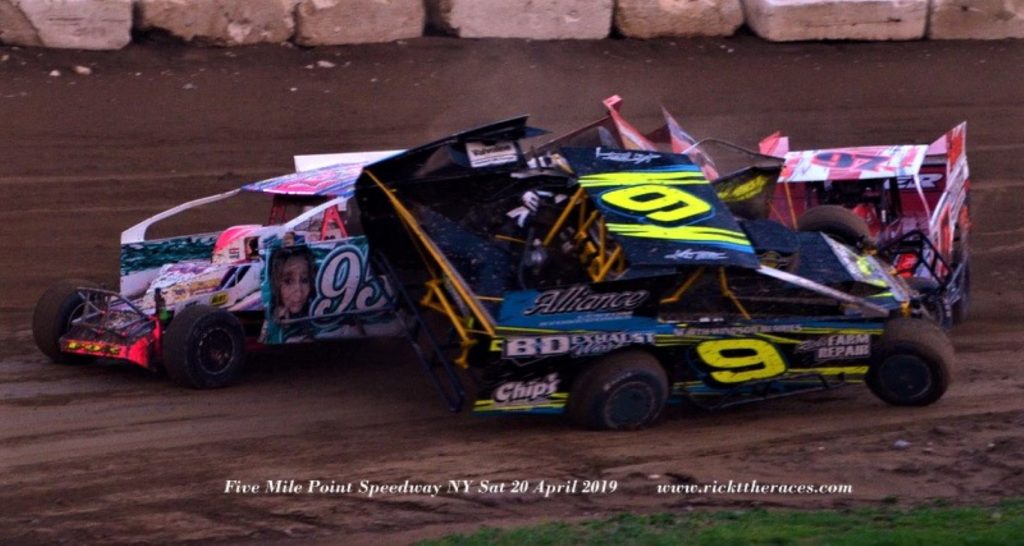 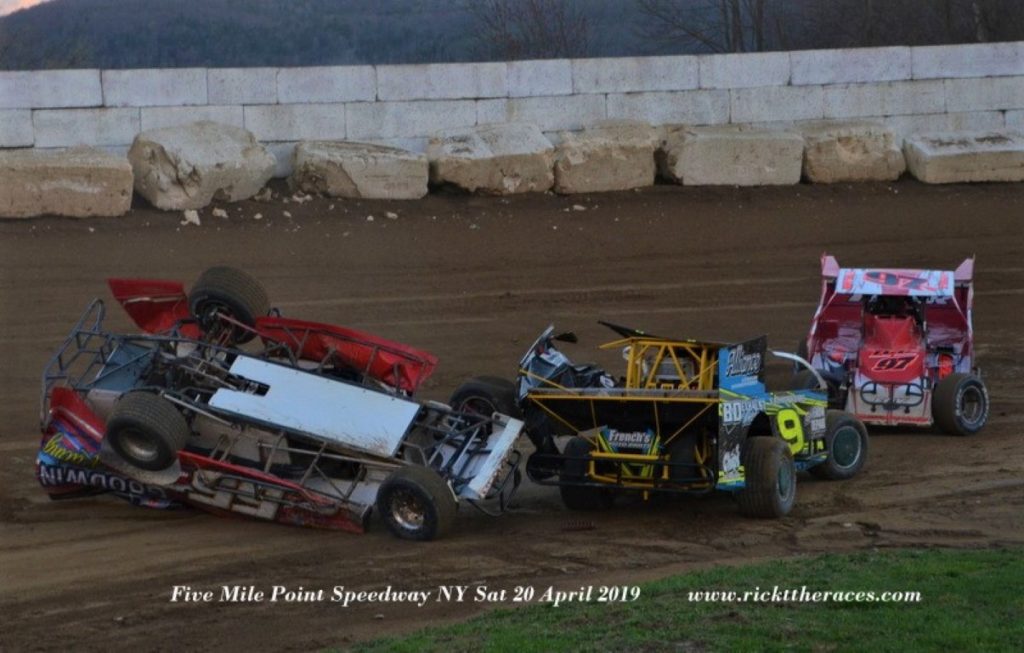 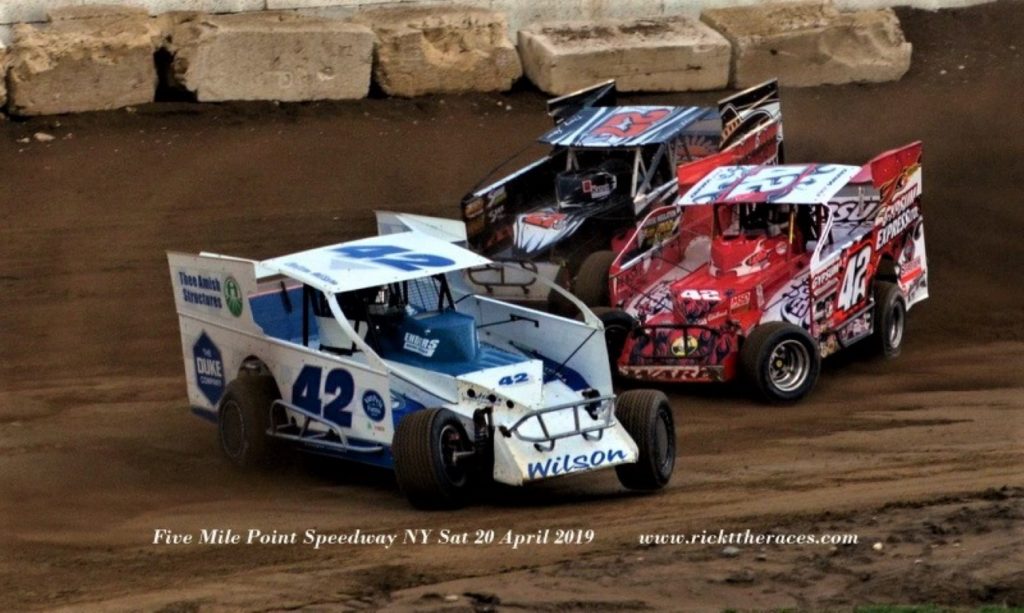 There were a lot of cars in attendance and the grandstands were full. There were 56 Modifieds and 40 Sportsman. 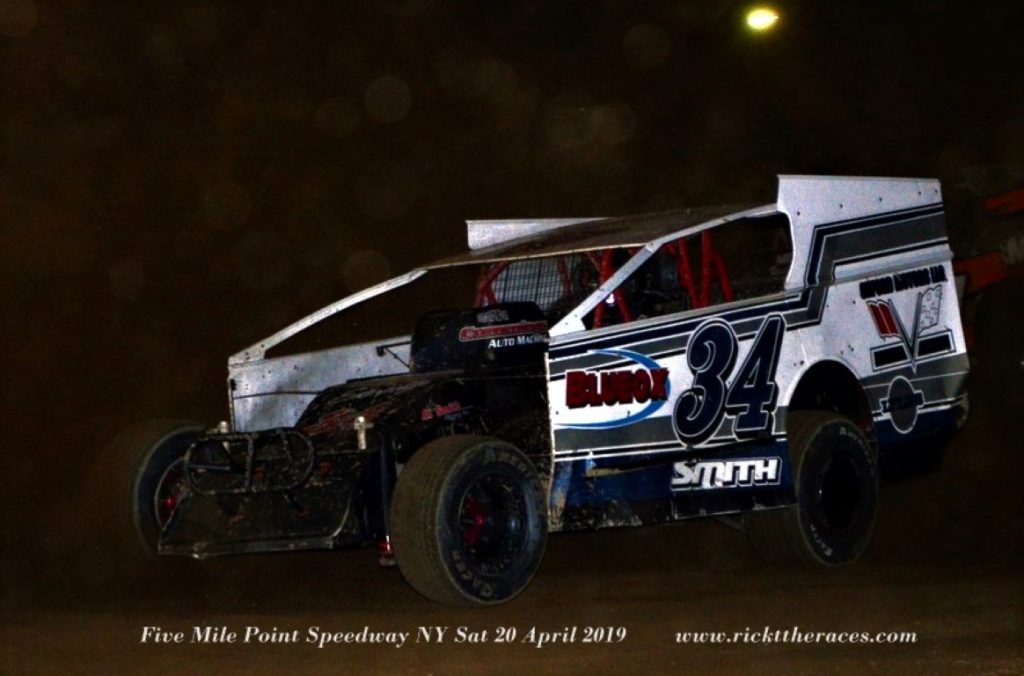 The main event of the day was the 46 Lap Doug Worthing Tribute Race.

Stewart Friesen, Nick Petrilack # 72 and Danny Johnson , all took turns of leading and being  in a position  for what looked like a pretty certain win, until equipment  failure knocked them out of contention. 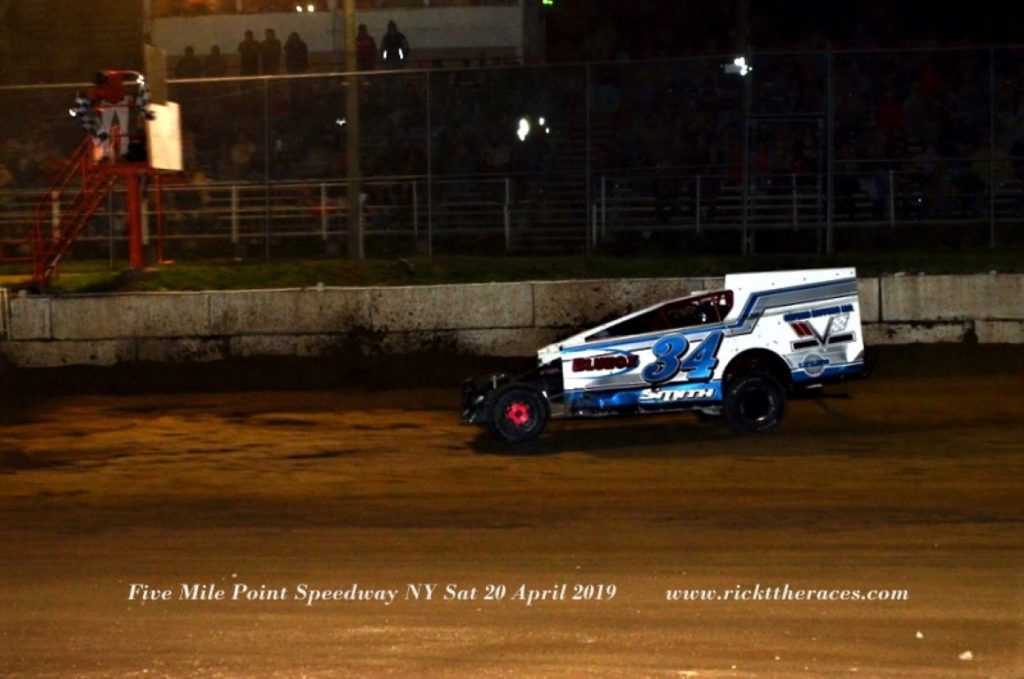 Johnson went out while leading, within the last few laps, leaving Rusty Smith # 34 to take charge and claim the checkers.

After the Victory Lane pictures, Don and I made our exit, for the journey back up I 81 towards  Canada.

It turned out to be a great night of racing and we were glad we chose to gamble on heading south , when Mother Nature looked set on ruining the weekend for all race fans.