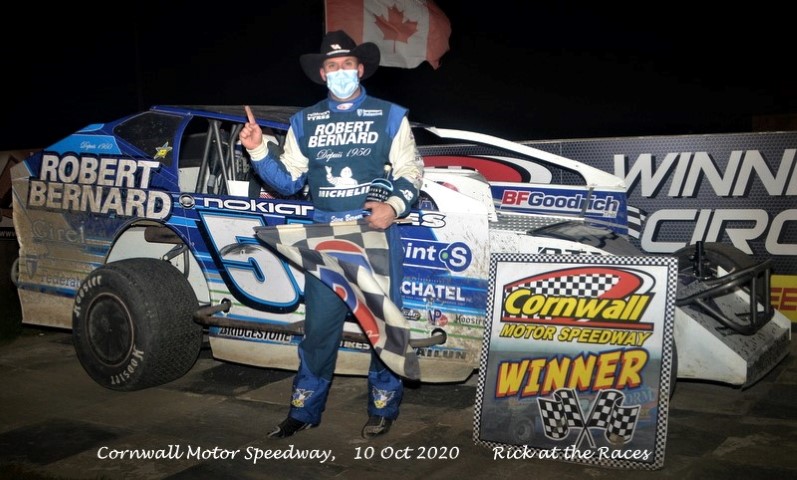 If this had been any normal year, my report for this week, the first week of October , would of been about Super Dirt Week in central New York.  Like everything else in 2020,  the COVID 19  restrictions,  have made things turn out very different.

With cross border travel prohibited, and only a limited numbers of fans allowed at the tracks, the U.S.A and Canada have had to do their own thing this year.

This past weekend , a kind of  ‘Canadian Super Dirt Week-End’ was held at the Cornwall Motor Speedway , to bring the countries dirt racing season to an end.

The event went under the name of ‘The Fall Show Down’ and was a three day show taking place during Canada’s Thanksgiving weekend. ( Friday 9th to Sunday 11th of October.

With the extra race haulers expected, the pits were extended, using a section of the parking lot.

I went along to the track mid week to see what to expect.

When Friday arrived I was there early . 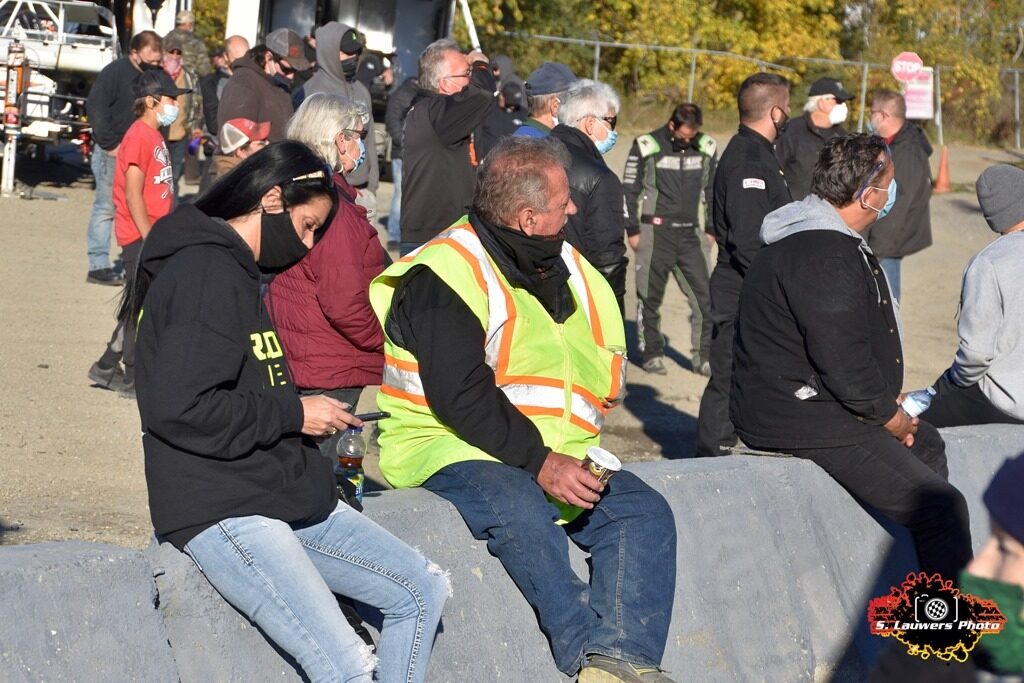 For this weeks report, I’ll condense things to the major races and talking points.

The first thing I must mention was the appearance of Yan Busiere with the former Mat Williamson car. I understand , he bought it from Mat, (Less Engine) following the previous weeks Fall Nationals at Brockville. 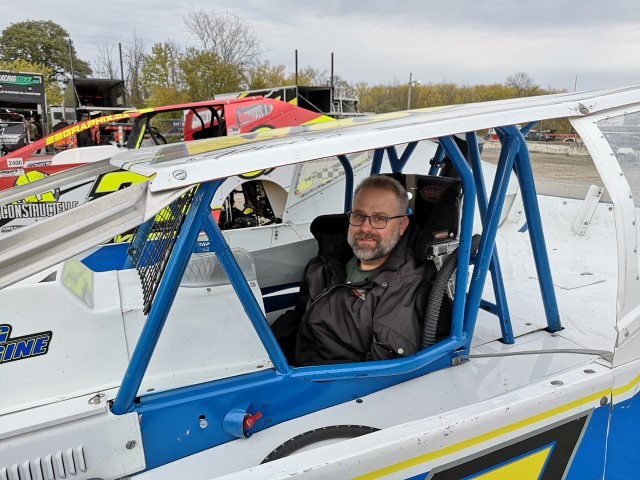 The next thing worthy of note was the return of Stephane Lafrance  ,  in the Pierre Dagenais car.

There were plenty of Modifieds and Sportsman on hand, and it was Luke Whitteker who won the headline 50 lapper for the Mods. 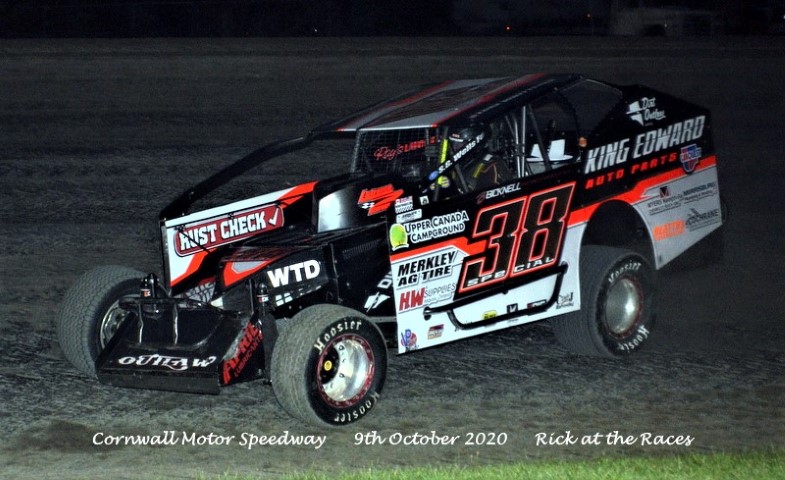 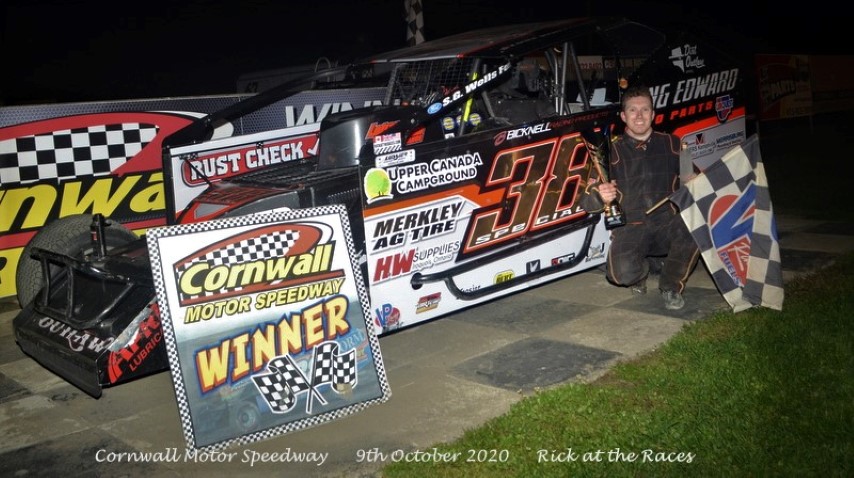 Just like the Modifieds, the 50 lap Sportsman race had a good field of cars, with many additions from the Niagara region.

It was Cornwall local # 77 Ryan Stabler that won the race. 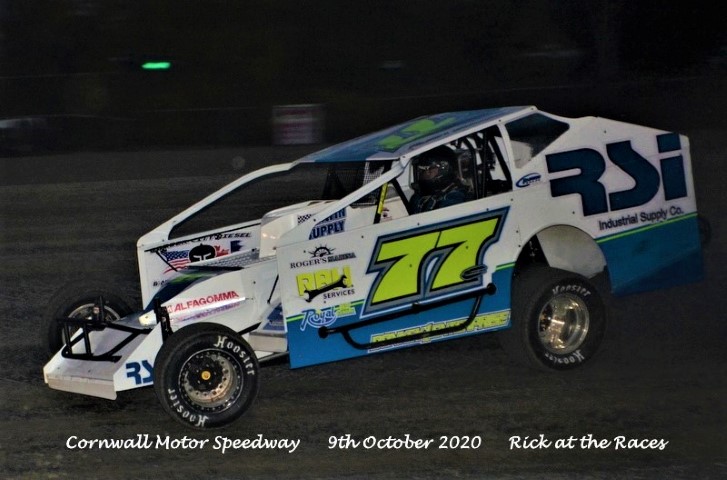 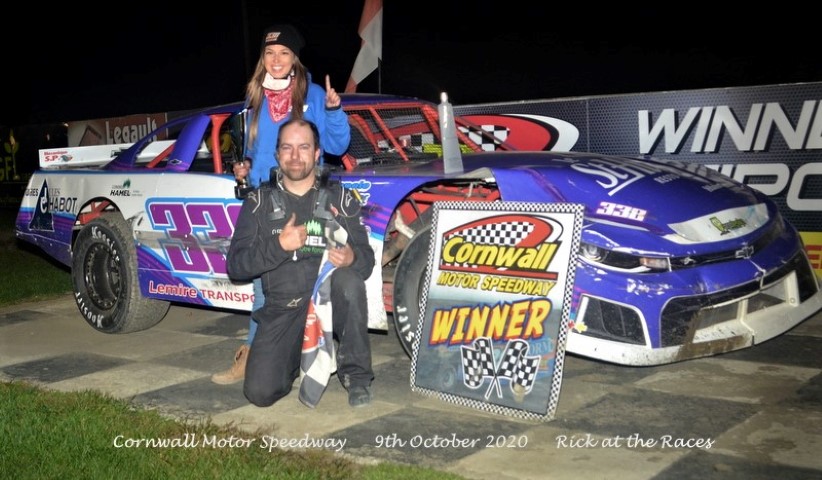 The final race of ‘day one’ was the Mini Stock Feature which provided another win for James Clarke. 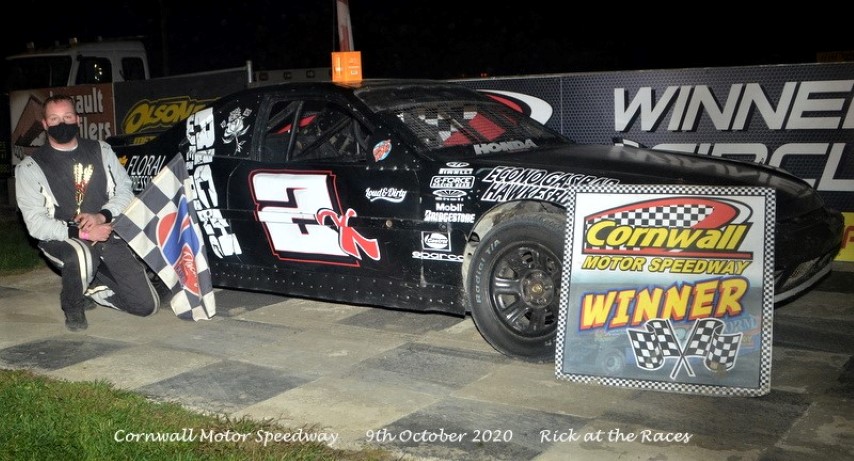 Everything was over by about 10-00 pm, which was a good thing, with such a lot going on over the weekend.

I only live ten minutes away from the track , so it gave me plenty of time to relax before ‘day two’.

It had rained during the morning and the forecast didn’t look good, but I drove across town mid afternoon with an optimistic mood.

Our team of  4 photographers was back to full strength ,  as Sylvain Lauwers had been missing on Friday due to work commitments . 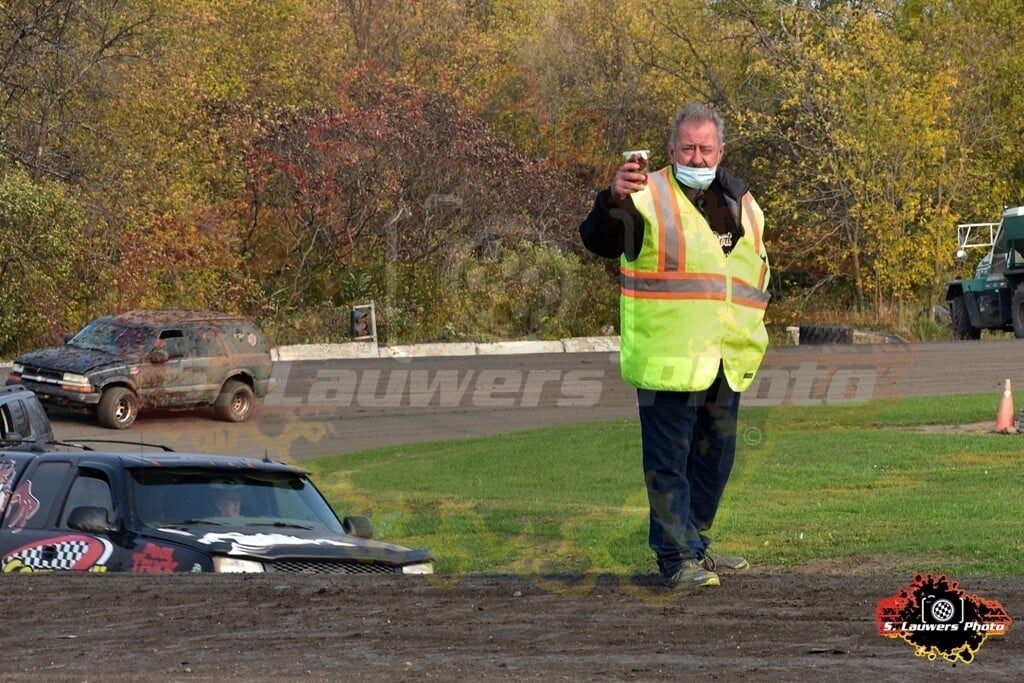 The rain teased us a little throughout the night, but somehow we managed to dodge the bullet , and the dark clouds passed us by, giving just a brief drizzle shower.

It only delayed things for a short time and soon the show was back on the go.

Once again it was 50 lap features for the Mods and the Sportsman.

Before the races , I bumped into Modified driver Steve Bernard, and he said to me  “It’s my turn to win tonight” . 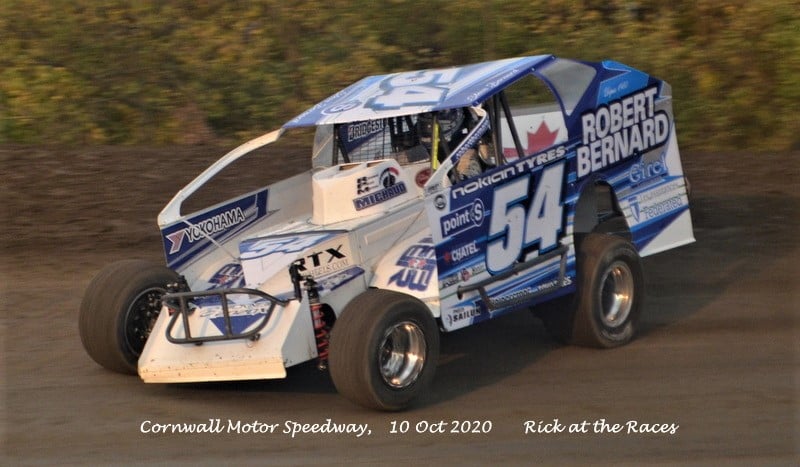 He turned out to be dead right , and by the time the race was over, it was him we were taking Victory Lane Shots of.

The Sportsman race was a thrilling one, where two of the Niagara visitors, James Friesen and Cody McPherson duked it out for the lead, for most of the 50 laps.

It was Friesen there when it mattered , with local Akwesasne driver Rober Delormier taking third. 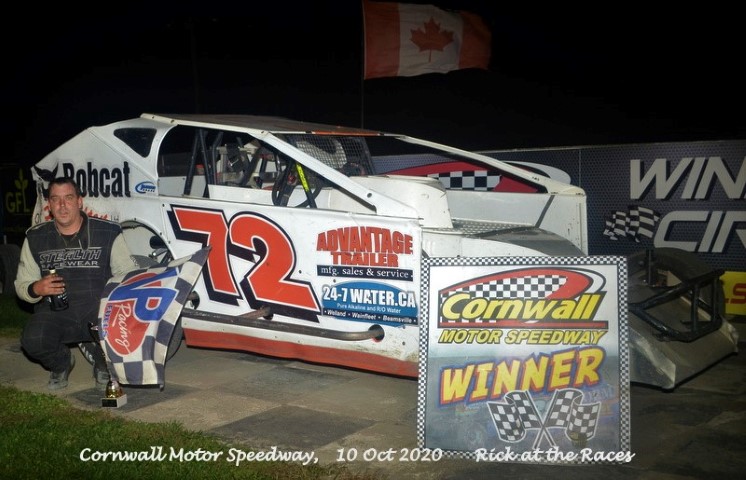 The Vintage races went to Randy Gaudet and Kayla Chartrand. 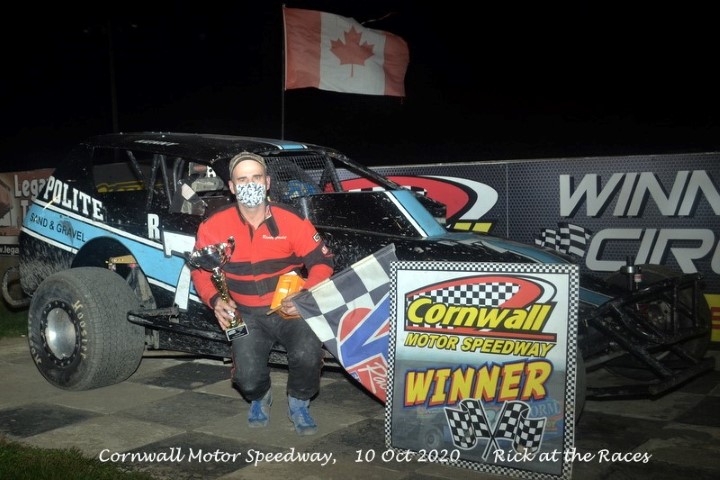 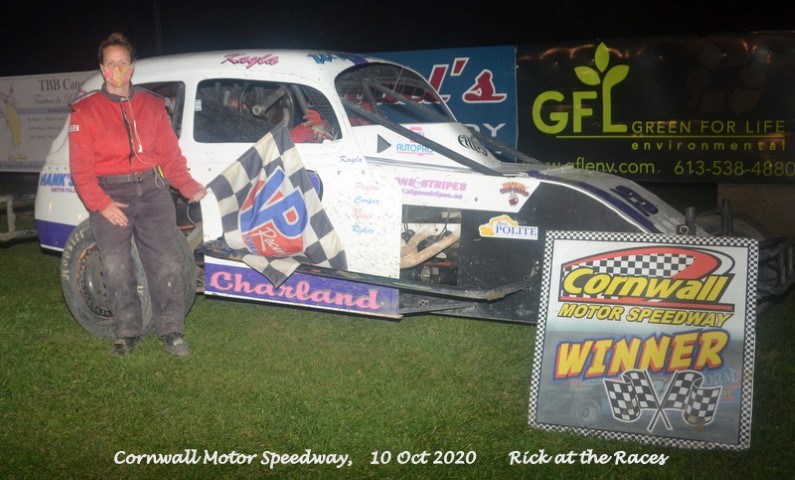 The Lightening Sprints feature had a red flag rollover situation as the green flag dropped, but eventually , we got a winner, with Jean -Christoph l Bolduc  . 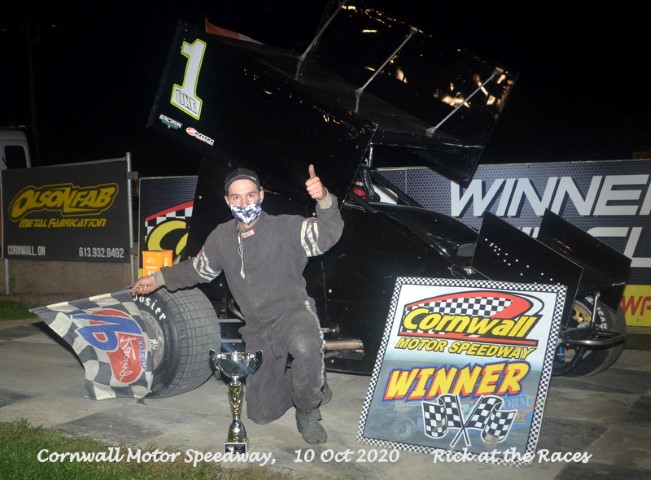 Even with the Sprint Car delays, and weather issues, we still managed to get another early finish at around 10-00 pm.  perfect !

Two down , one to go,  and after another relaxing day at home, I was back at the track at about 2-30 pm for the final day.

This had the potential to be a long night, with five divisions on the card, which included a 125 lap race for the Mods and 100 for the Sportsman.

First of the Features were the Mini Stocks, and once again we had James Clarke in Victory Lane.

Vintage Mods followed and it was Josh Powers who took the checkers.

The Lightening Sprints were back , and this time they exceeded them selves with a feature race with  just one stoppage,  (if I remember correctly) . 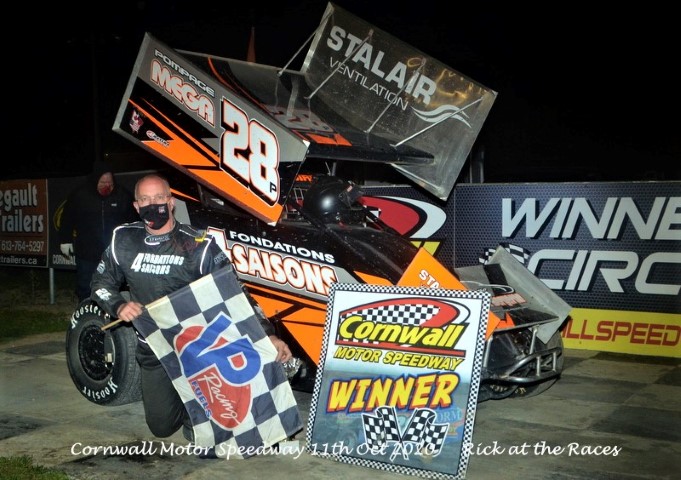 Yannick Poirier was the winner .

The big race of the weekend, the 125 lap Canadian Nationals for the 358 Mods was up next.

It went very quickly with just a few cautions.

Dalton Slack led for many laps before an incident with back markers caused him to hit the wall.

After this we were treated to a long battle between Gary Lindberg and Steve Bernard. 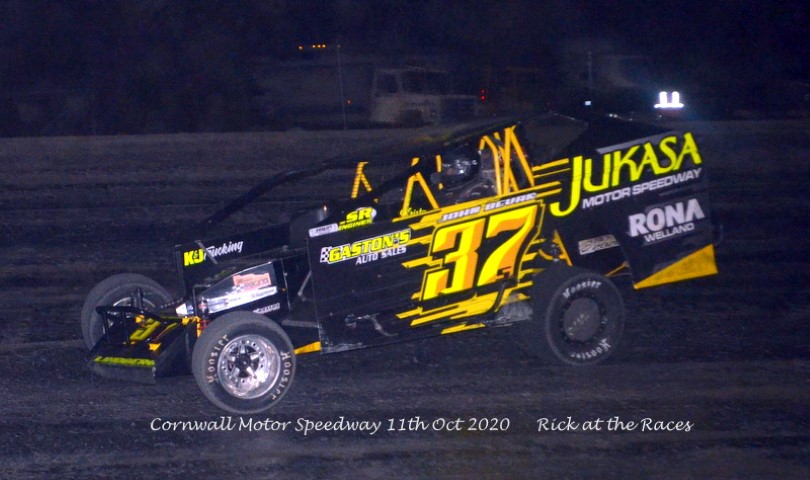 Eventually Bernard managed to edge past Lindberg to get his second win in two days. 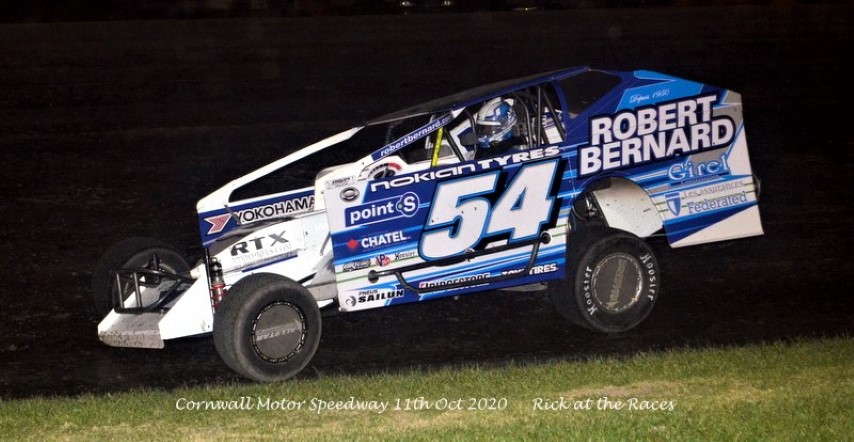 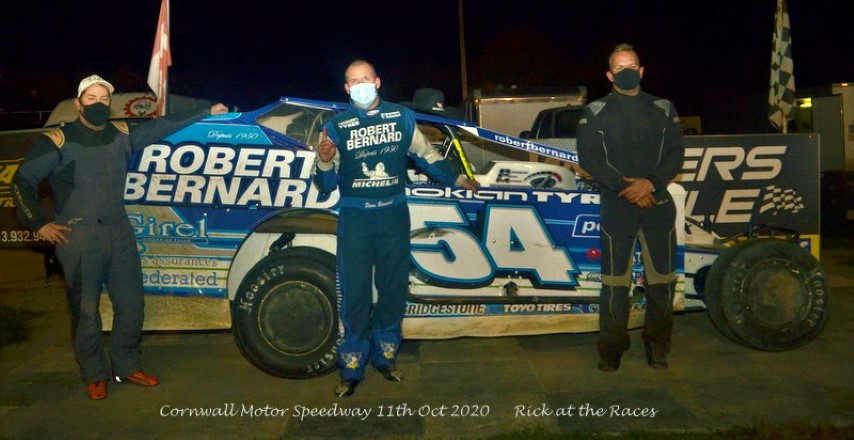 Corey was presented with his trophy by promoter Raymond Lavergne and Les Winters.

The Sportsman feature was the curtain closer of the weekend, and indeed the 2020 season. 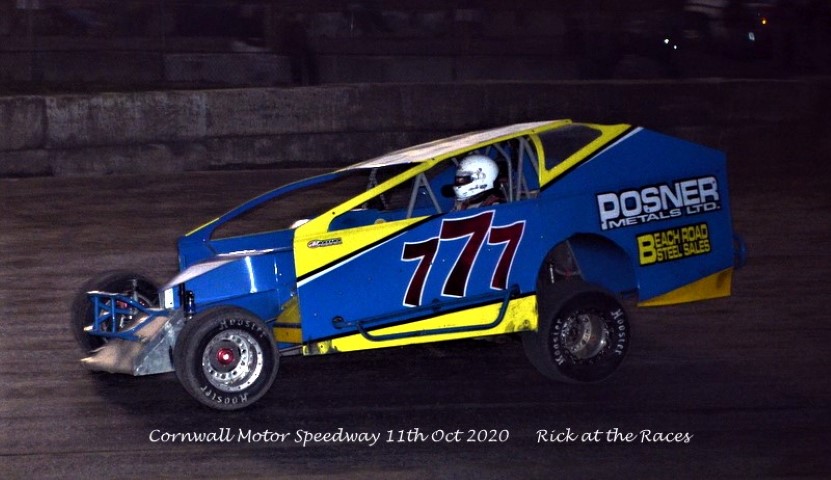 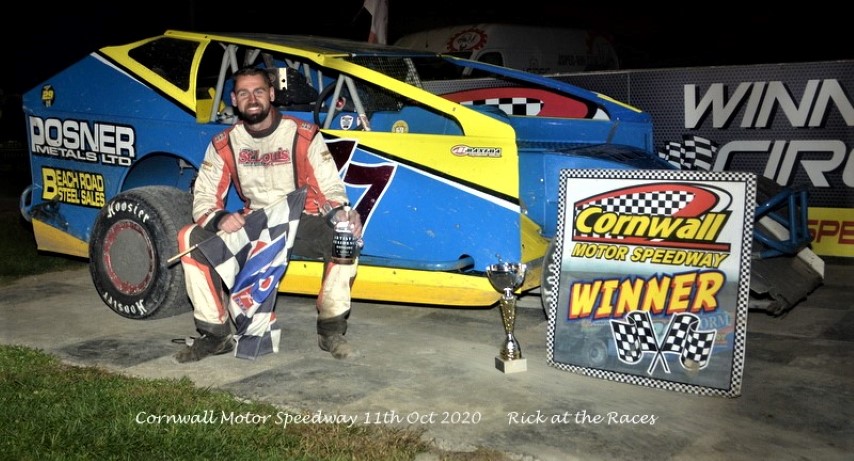 Once again this was a good one with Cody McPherson having to fight off a late challenge from Ryan Stabler.

Stabler chased him across the finish line with Jarrett Herbison, taking third. 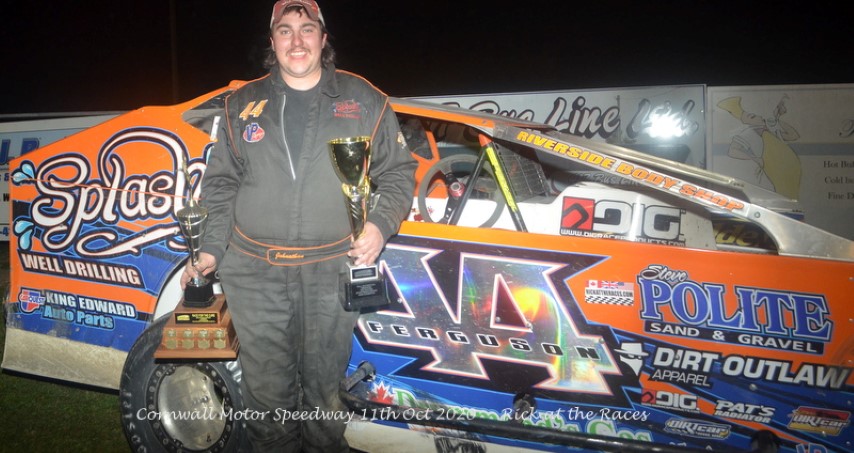 Johnathon Fergusson, was the season long winner of the TAS Racing Sportsman Series.

The presentations were done by 11-00 pm,  not bad at all, when you consider the full schedule of events.