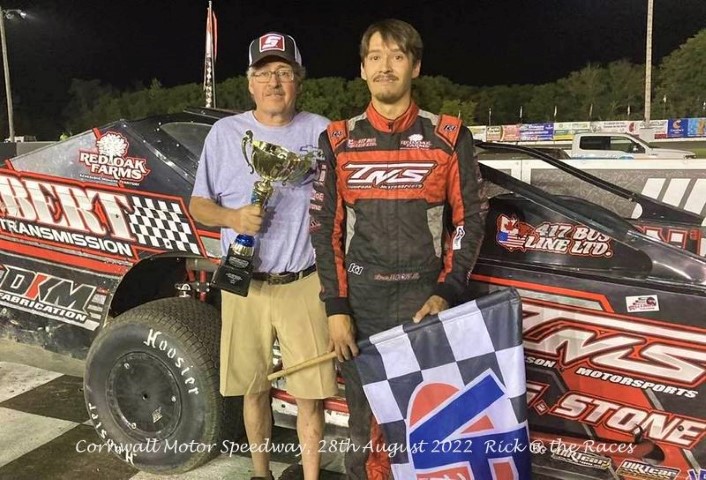 This past week was another one where  my racing agenda got cut down a little by Mother Nature.

The weather forecast for Friday the 26th of August, was for on and off rain through out the day, and it was no surprise when an early cancelation was announced at my local Mohawk International Raceway.

The same thing applied to Autodrome Granby in Quebec, but my other local track, the Can Am Speedway at Lafargeville NY, managed to survive. The situation at Can Am was still doubtful leading into the afternoon, so I decided not to risk it.

I had no big plans to travel further a field this weekend as I’m taking things easy in preparation for an upcoming overseas trip.

As mentioned, Can Am  did get the show in, and Derek Webb got his second 358 Modified win of the year.

The weather was looking good on Saturday so I made the short trip down the 401 to the Brockville Ontario Speedway.

As well as the headlining 358 Modifieds, there was also a DirtCar Series race for the Sportsman.

Also on the books , we had Rookie Sportsman and Mini Stocks. The track was in great shape and the program moved along swiftly with no major delays.

The first feature race of the night was for the Mini Stocks , and this was won by Kevin Sabourin, 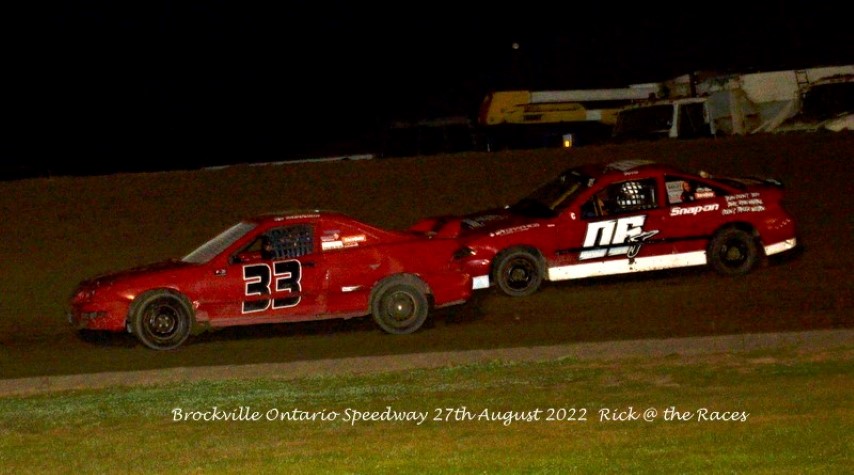 Next up was the 35 lap Modified Feature. 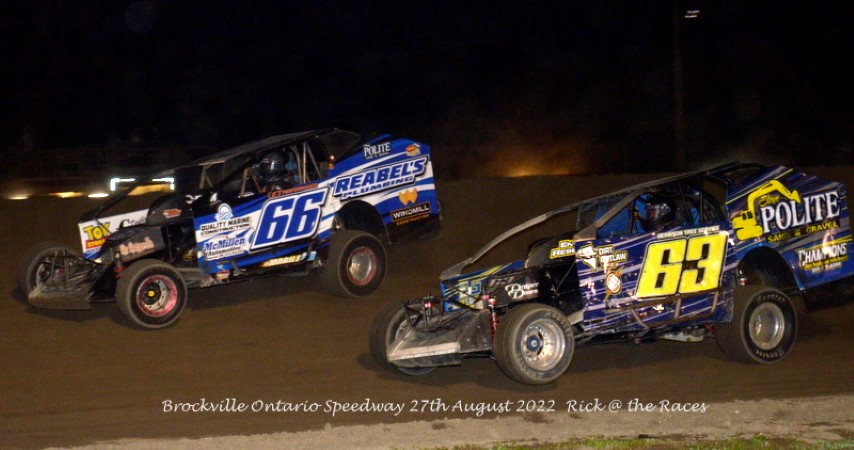 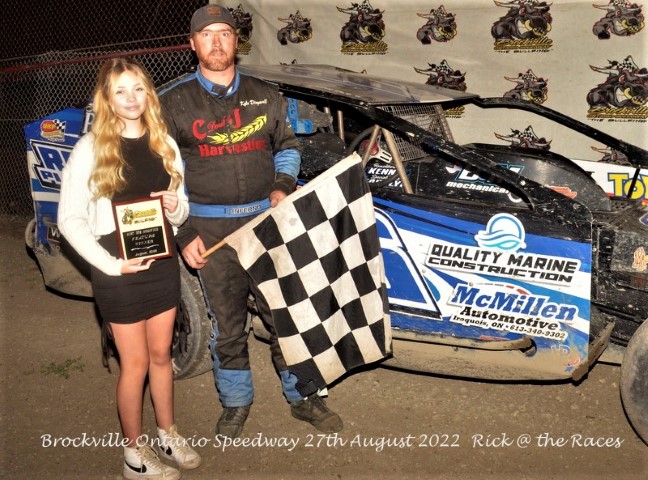 After Chris Herbison dominated for the first part of the race, Kyle Dingwall eventually edged past to take the checkers.

Dylan Kirkland looked all set for a surprise win in this one until late cautions allowed the field to close up. 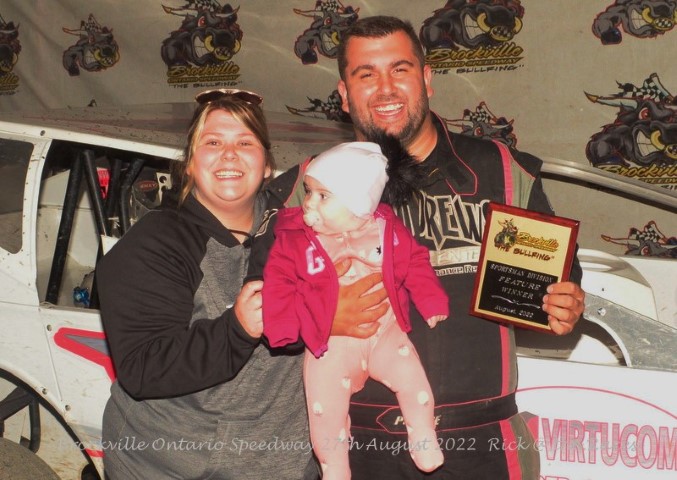 In the closing stages Shane Pecore got past to grab the win.

The last race of the night was for the Rookie Sportsman. 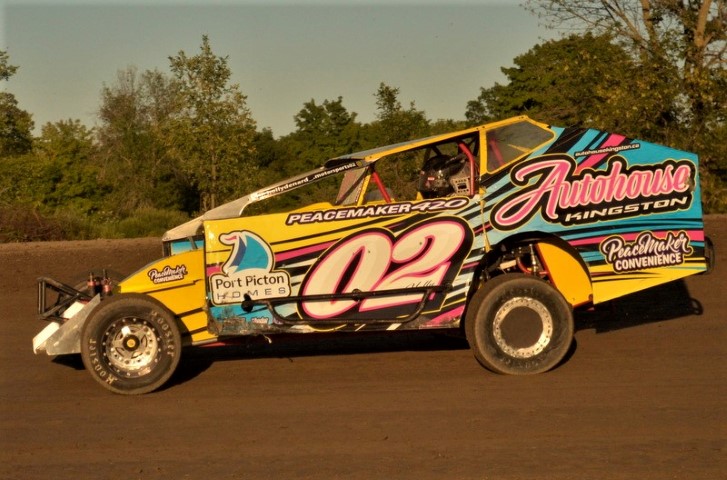 This gave Holly Denard her second feature win of the year,

Everything was over by 10-15 pm , that was perfect for me. I was back home in Cornwall before mid-night, and even after stopping for a ‘Tim’s’.

Sunday morning was spent editing pictures, with the Belgian F1 GP on TV in the background.

After starting from the rear of the grid, World Champion, Max Verstappen brought his Red Bull to the front of the field to claim yet another win.

The weather was perfect on Sunday for the races at the Cornwall Motor Speedway.

There was a big program of racing to get through. On the schedule there were 358 Modifieds, Sportsman, Rookie Sportsman, Pro Stocks, and Mini Stocks. Adding to this it was the ‘on track’ Autograph Night.

The fans love the chance to meet the drivers close up,  but to ‘grumpy old men’ like me,  it adds precious time to a long night . One of the drawbacks of me getting old LOL.

With all this going on, I wasn’t expecting the show to finish early, but I’m pleased to say , my fears were proved wrong .

For the Hot Laps , I tried shooting pics from the back straight to see how they turned out . It’s not an ideal spot with the sun right in front of you at that time of night.

Things got started a little earlier than usual and the heat races were soon in the books.

The first features was held before the Intermission and Autograph session.

This was for the Rookie Sportsman 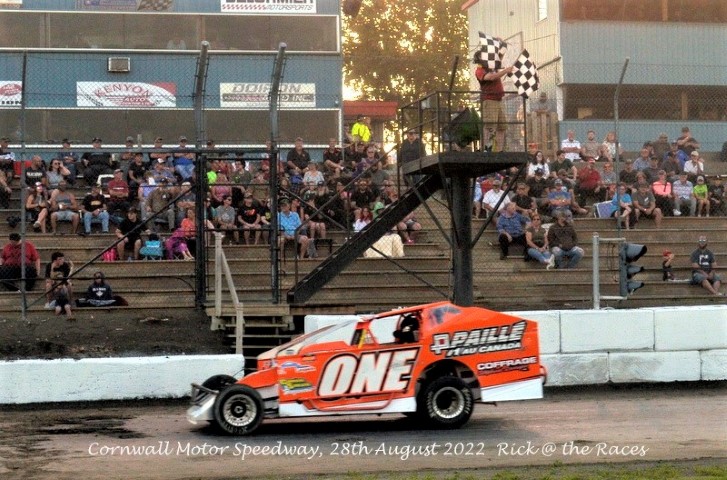 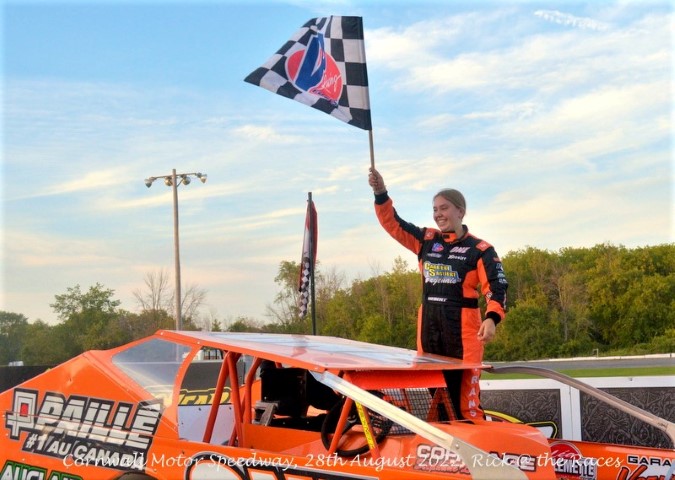 The winner of this was Daphne Hebert, the teenage daughter of my friend the top 358 Modified driver David Hebert. 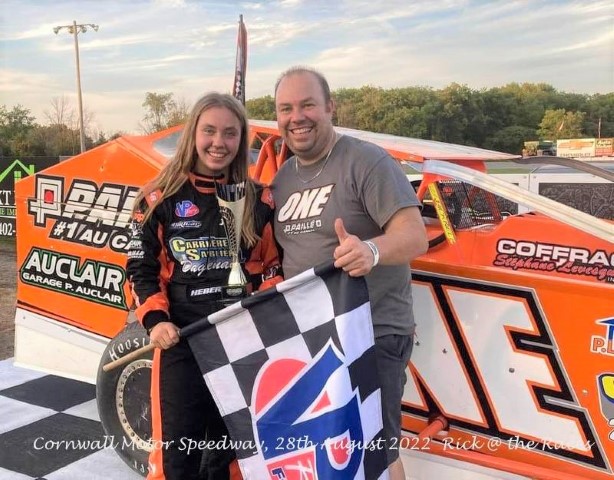 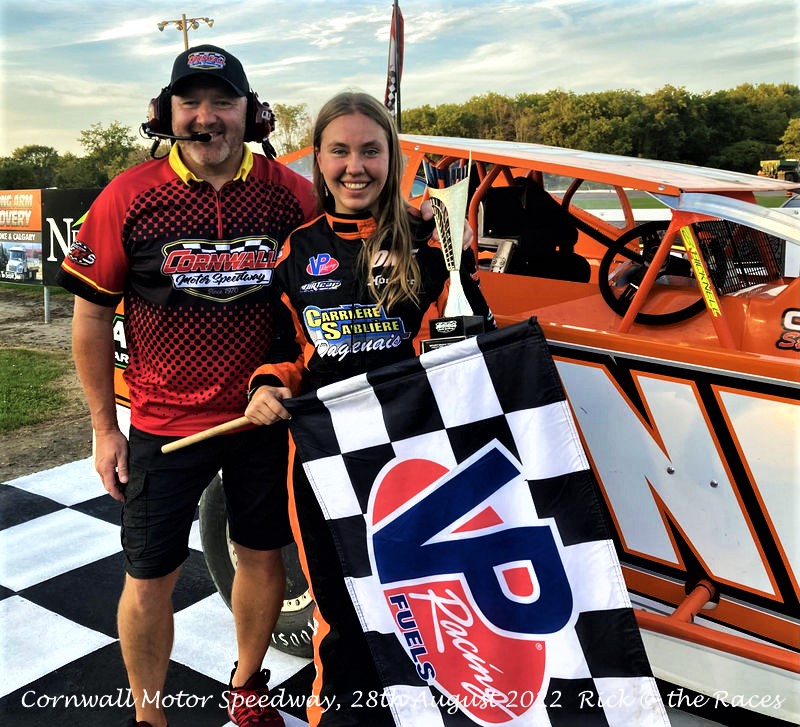 It was her first ever win and Joel Doiron, the tracks race director, came down from the control tower especially to congratulate her.

Race cars from all divisions then filed out of the pits to park on the home straight for the fans to meet the drivers.

First up, after the break , it was the Vintage Modified Feature.

There were three generations of Riddell taking part in this one , There was Wayne, his son Jason and grandson Gavin. 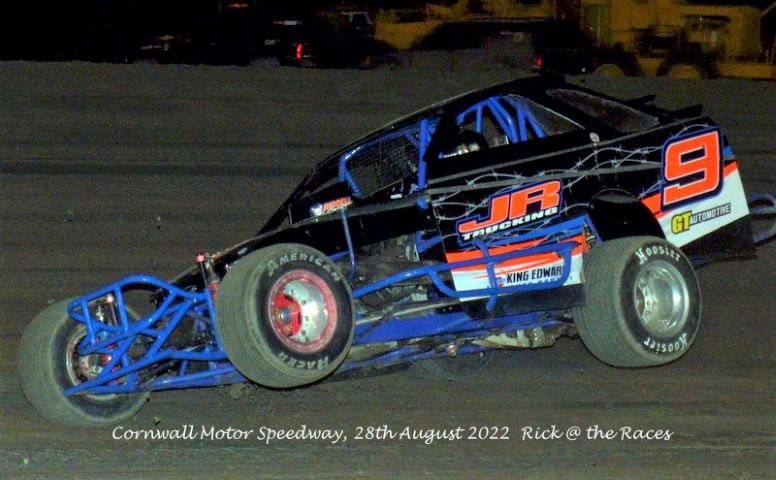 Jason was the early leader, and almost performed a ‘flip’, but it was Gavin that came through to take the checkers. 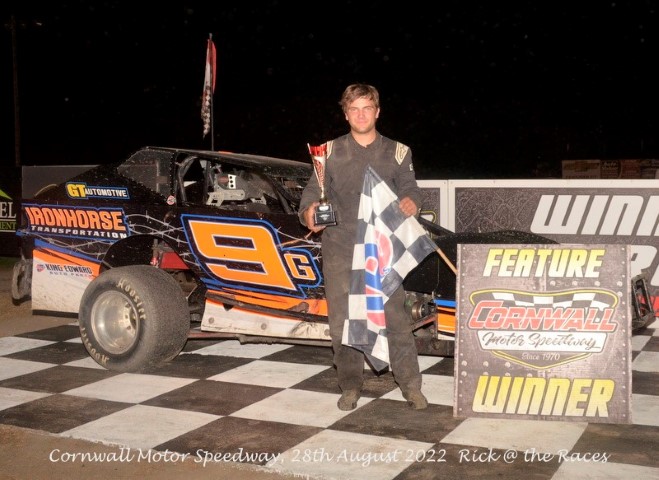 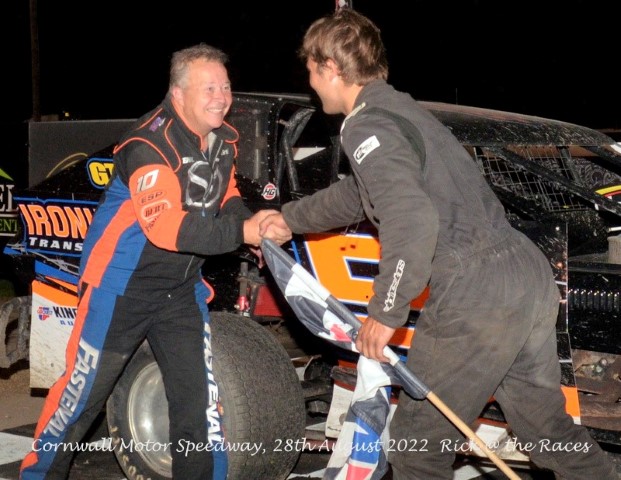 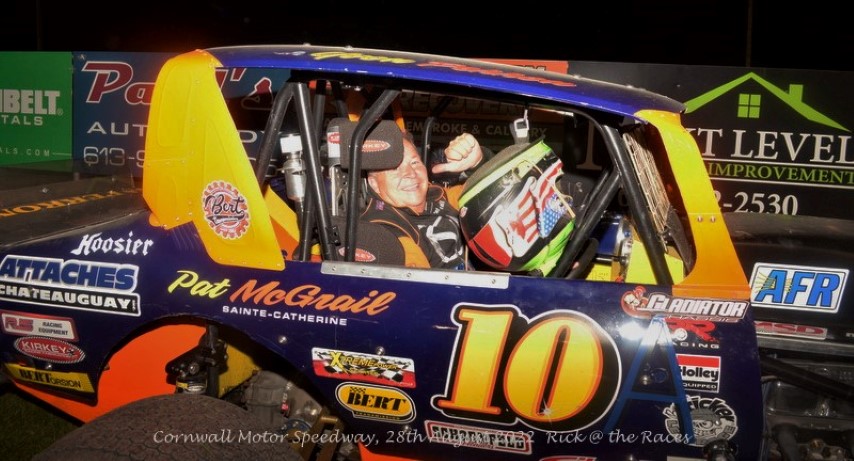 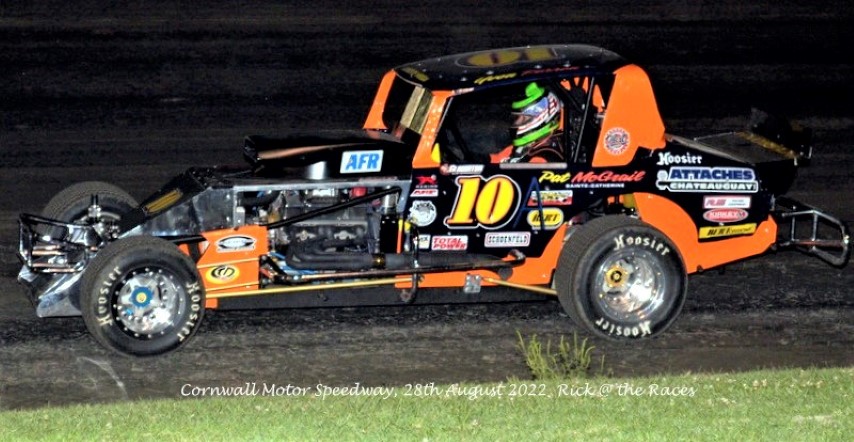 He was out in a beautiful creation, very reminiscent of the kind of stock cars we raced in the UK back in the 1970’s.

FLASHBACK to 2014 and Pat McGrail wins at St Euatache 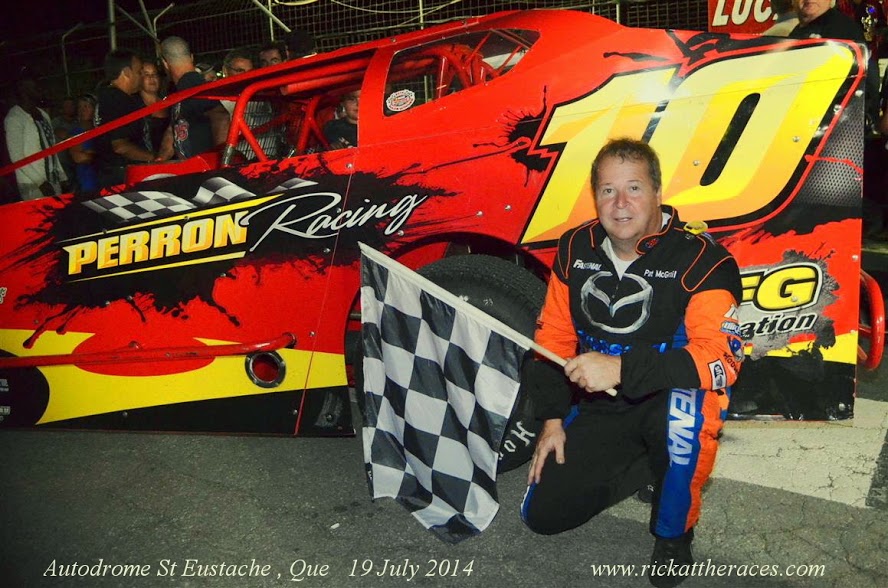 The Modifieds were up next .

The early leader was Luke Whitteker until engine issues caused him to pull off on the back straight . 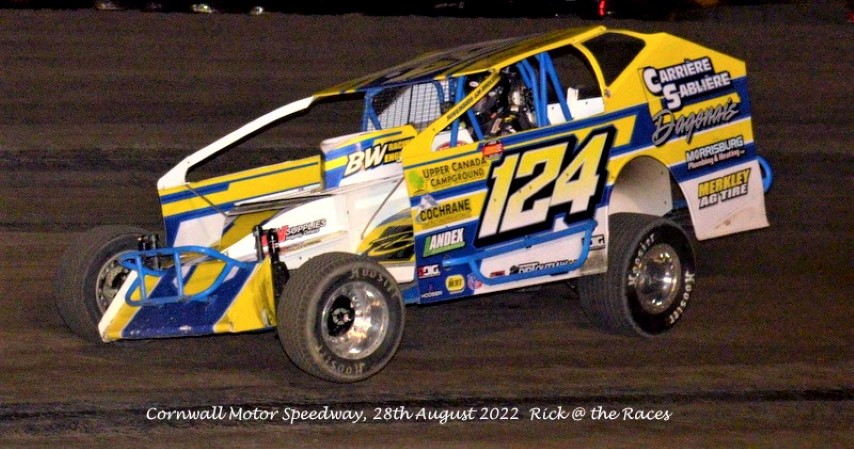 After the caution , the race developed into a battle between Corey Wheeler and Johnny Johnson.

They dueled for a number of laps , but in the end, it was Jackson who using the top groove, who took the lead. 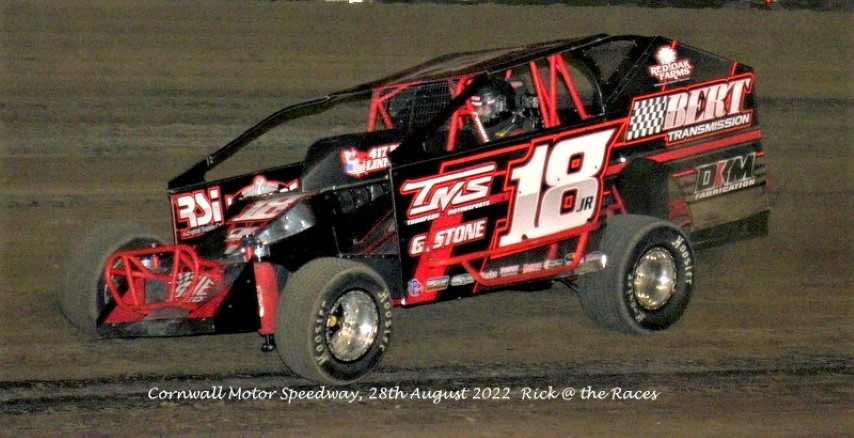 He went on to take a well deserved Victory, which he told me after the race, was his first win in two years. 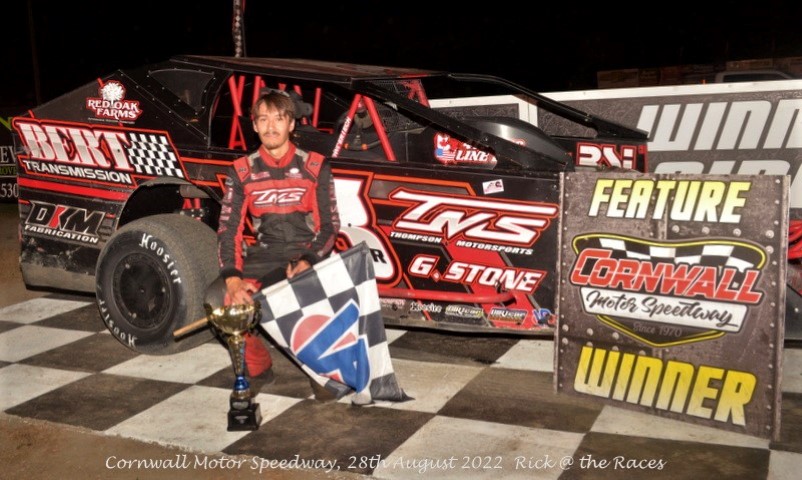 The Sportsman feature followed this. 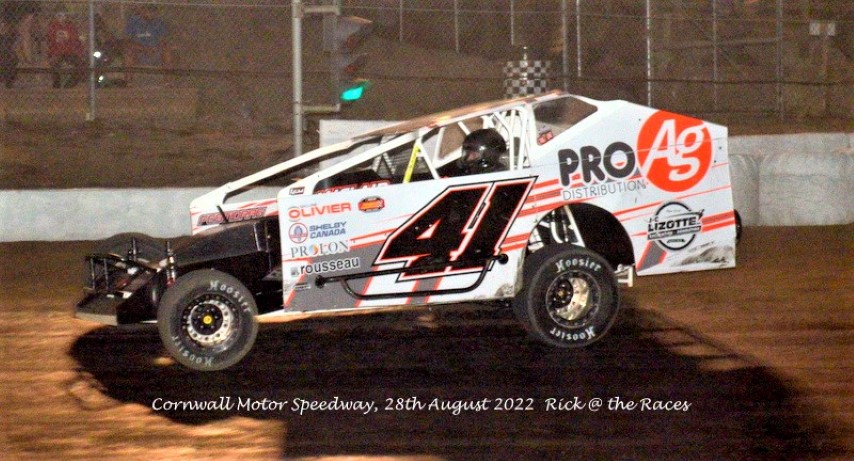 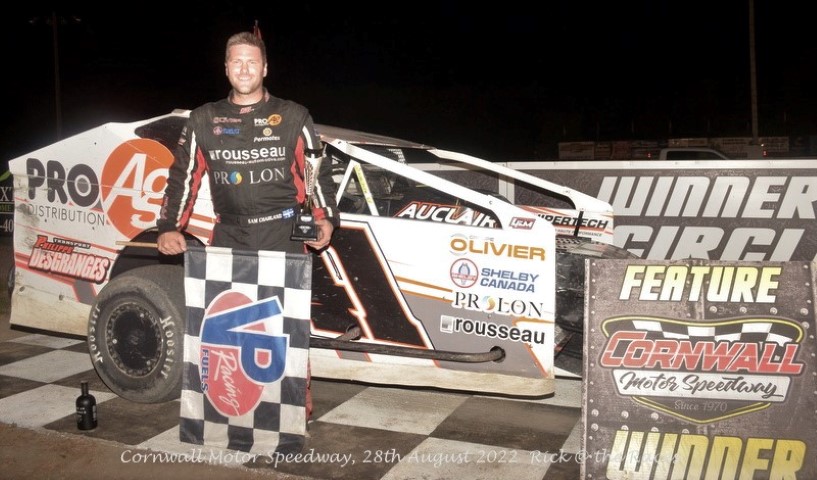 Samuel Charland didn’t take long to get the lead , and stayed there to the checkers.

The penultimate feature was for the Pro Stocks.

Jocelyn Roy took this after being challenged by Bruno Richard in the late stages. 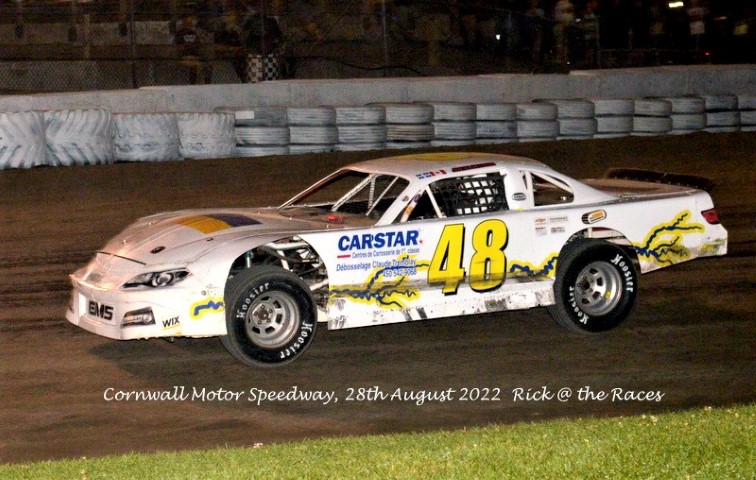 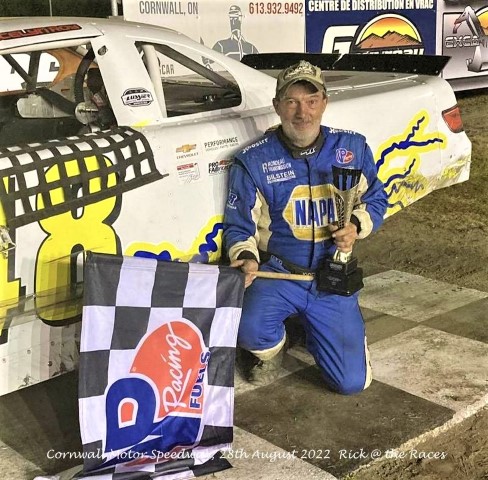 It was nice to see Jocelyn back in Victory Lane, He was a regular winner in the Pro Stocks division a few years back.

The Mini Stocks finished the night and this was a good one.

We had  a battle to the flag between Alexis Charbonneau and Skylar Ladouceur.  Alexis managed to hold him off , to get his second consecutive win. 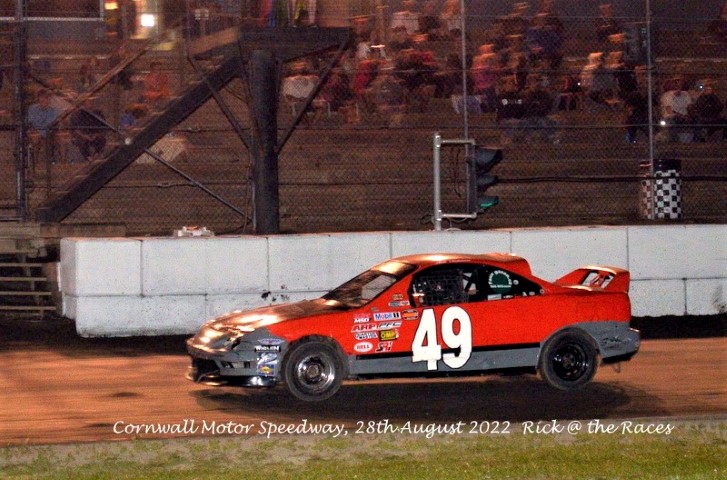 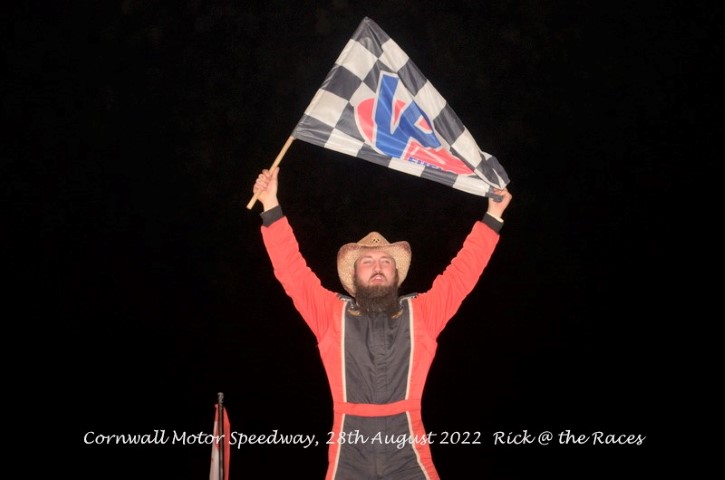 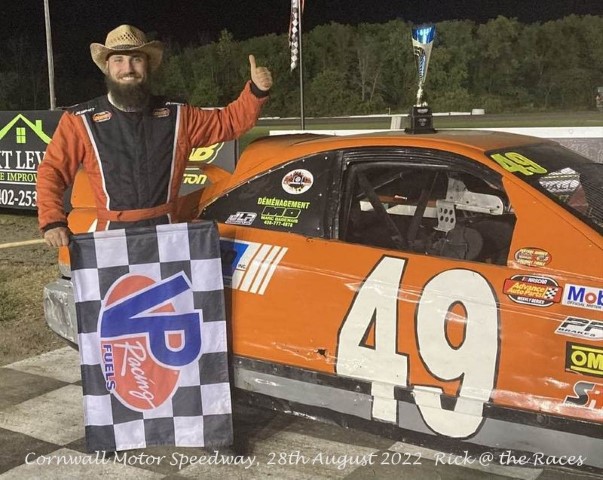 After doing the Victory Lane pictures, I was quite surprised when I checked the time. It wasn’t even 10-30 pm, so full marks to everyone concerned for getting such a large program done in such quick time.